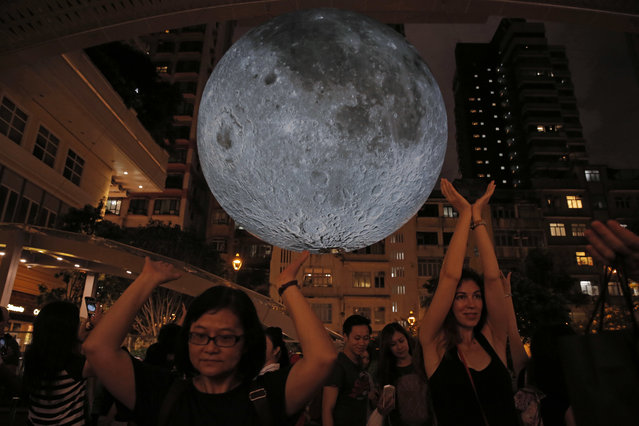 Visitors pose for photographs in front of an installation “Museum of the Moon”, a giant seven-meter-wide glowing sculpture of the moon, created by British artist Luke Jerram in Hong Kong to celebrate the Mid-Autumn Festival, Wednesday, October 4, 2017. (Photo by Kin Cheung/AP Photo) 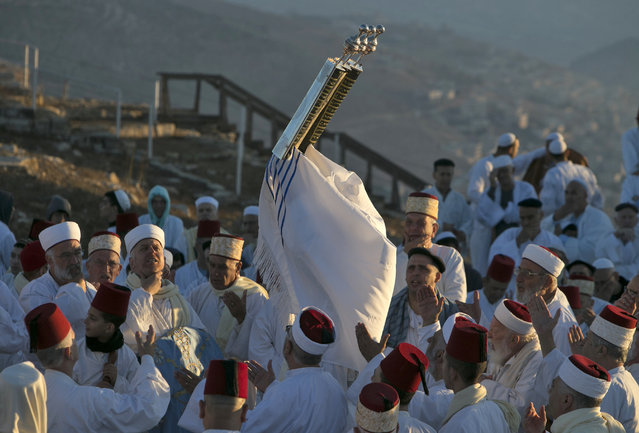 Samaritans pray on top of Mount Gerizim, near the northern West Bank city of Nablus, during celebrations for the holiday of Sukkot (the Tabernacles Feast), which marks the exodus of the ancient Hebrew people from Egypt, on October 4, 2017. Samaritans are a community of a few hundred people living in Israel and in the Nablus area, who trace their lineage to the ancient Israelites Moses led out of Egypt. (Photo by Jaafar Ashtiyeh/AFP Photo) 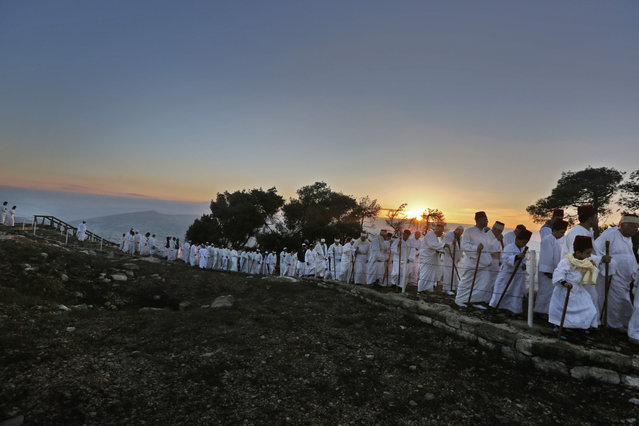 Samaritans walk up to pray on Mount Gerizim, near the northern West Bank city of Nablus, during celebrations for the holiday of Sukkot (the Tabernacles Feast), which marks the exodus of the ancient Hebrew people from Egypt, on October 4, 2017. (Photo by Jaafar Ashtiyeh/AFP Photo) 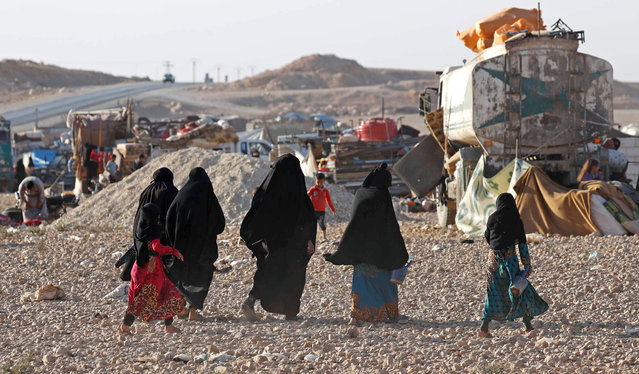 Displaced residents walk inside a refugee camp for people displaced by fightings between the Syrian Democratic Forces and Islamic State militants in Ain Issa, Syria on October 3, 2017. (Photo by Erik De Castro/Reuters) 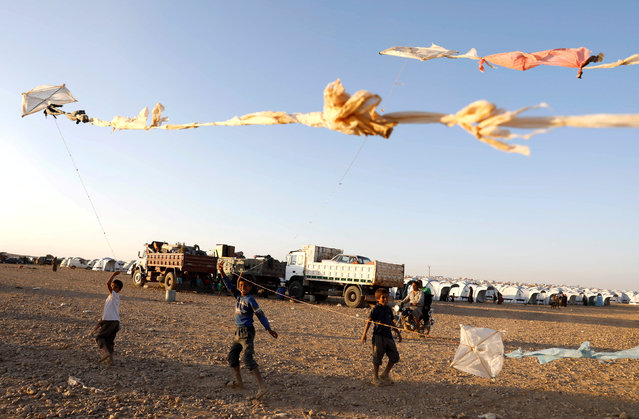 Children fly their kites as they play inside a refugee camp for people displaced by fightings between the Syrian Democratic Forces and Islamic State militants in Ain Issa, Syria October 3, 2017. (Photo by Erik De Castro/Reuters) 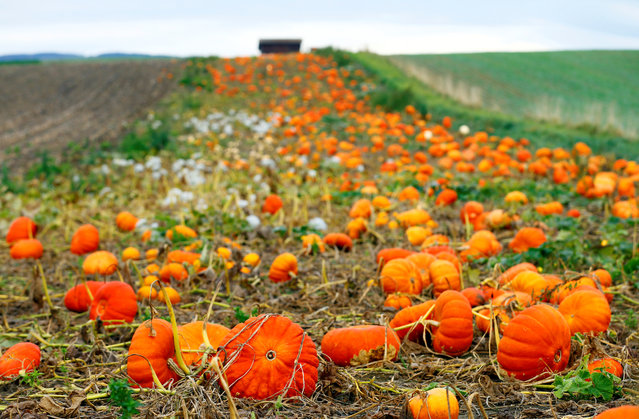 Pumpkins are pictured in a field on an autumn morning in Oulens-sous-Echallens, Switzerland October 4, 2017. (Photo by Denis Balibouse/Reuters) 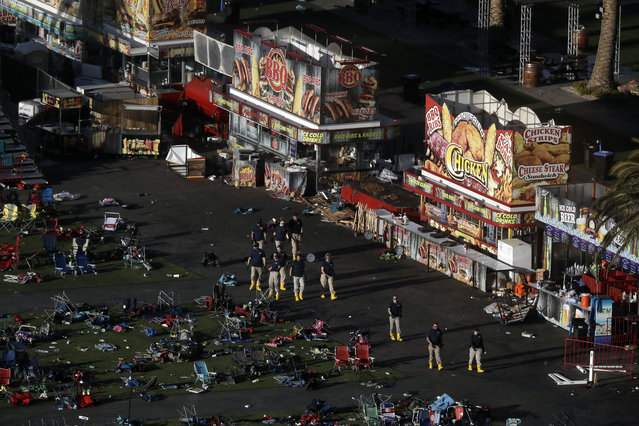 Investigators work at a festival grounds across the street from the Mandalay Bay Resort and Casino on Tuesday, October 3, 2017, in Las Vegas. Authorities said Stephen Craig Paddock broke windows on the casino and began firing with a cache of weapons, killing dozens and injuring hundreds at the music festival on Sunday. (Photo by Marcio Jose Sanchez/AP Photo) 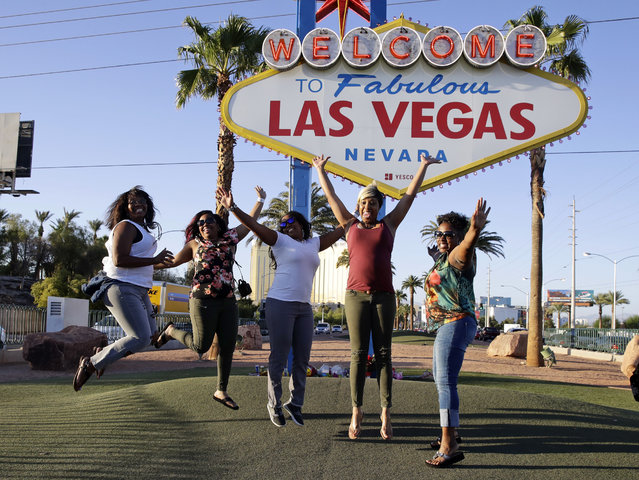 In this Tuesday, October 3, 2017 photo, tourists pose for photos in front of the Welcome to Las Vegas sign that has flowers honoring the people who died in a mass shooting on Sunday in Las Vegas. But even though the city is in mourning, for many it is business as usual with celebrations and parties continuing. (Photo by Chris Carlson/AP Photo) 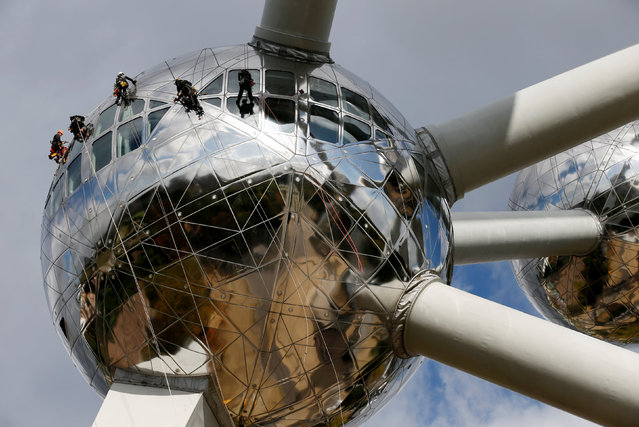 Workers rappel down one of the nine spheres of the Atomium, a 102-metre-tall structure designed for Expo 58, during its annual cleaning in Brussels, Belgium on October 3, 2017. (Photo by Francois Lenoir/Reuters) 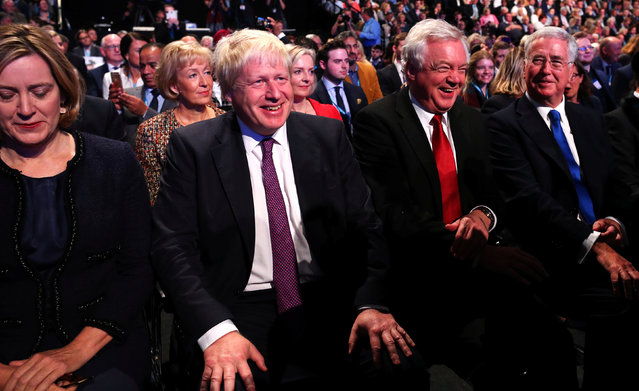 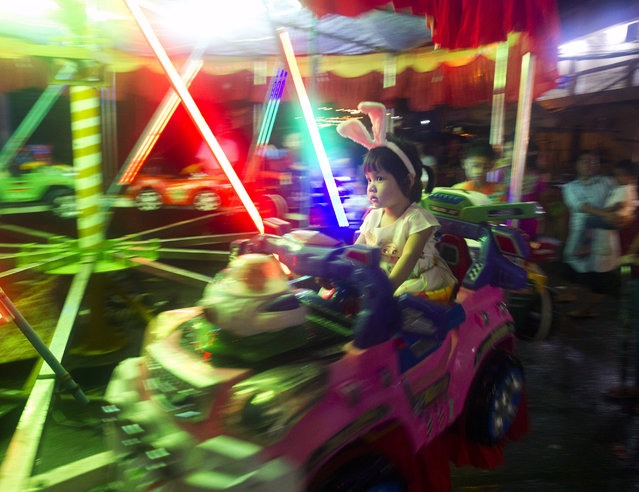 A young girl enjoys the annual local night bazaar to mark the Thadingyut festival in downtown Yangon, Myanmar, Wednesday, October 4, 2017. The Thadingyut festival, also known as lighting festival, is held around the country at the end of Buddhist Lent marking Buddha's descent from heaven after He sermonized the Abhidamma to His mother who was born in heaven. (Photo by Thein Zaw/AP Photo) 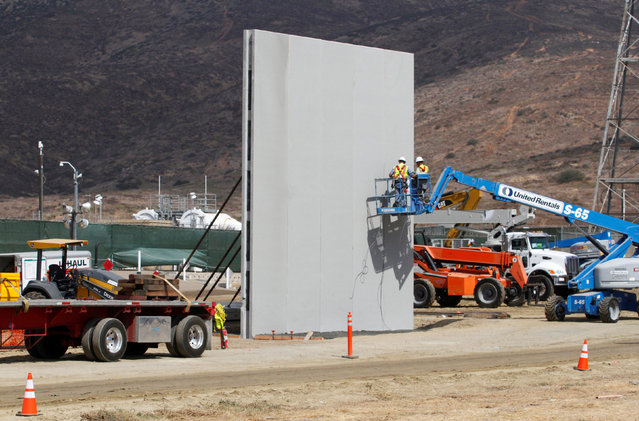 People work in San Diego, California, U.S., at the construction site of prototypes for U.S. President Donald Trump's border wall with Mexico, in this picture taken from the Mexican side of the border in Tijuana, Mexico October 3, 2017. (Photo by Jorge Duenes/Reuters) 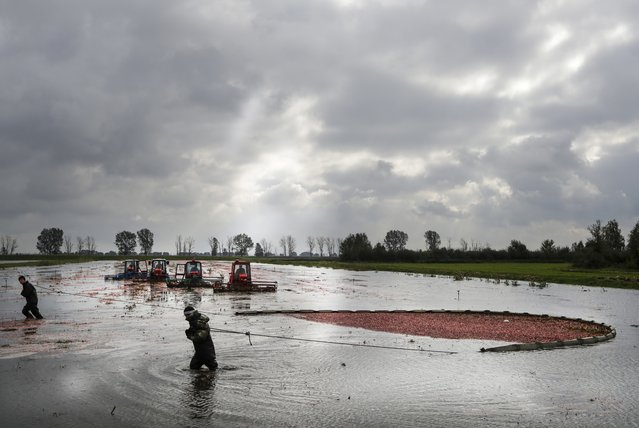 Workers haul in their harvest of cranberries at a state farm in the village of Selishche, some 320 km (200 miles) southwest of Minsk, Wednesday, October 4, 2017. Workers flood the area where the cranberries grow, then use special appliances to loosen them from the vine and let them float to the surface for being harvested. (Photo by Sergei Grits/AP Photo) 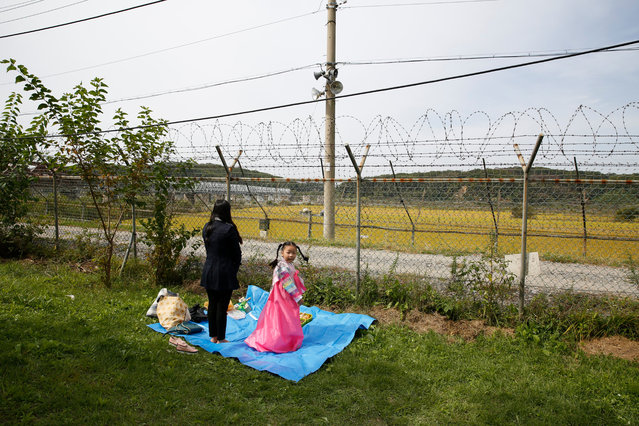 A South Korean mother and her daughter have an ancestor-memorial service near the North Korea-South Korea border near the Demilitarized zone in Paju, Gyeonggi-do Province, South Korea, 04 October 2017. Chuseok is the autumn harvest celebration of the Lunar Calendar and is one of Korea's major traditional holidays. Many Koreans take long trips to their hometowns on Chuseok to visit family and pay homage to ancestors. (Photo by Jeon Heon-Kyun/EPA/EFE) 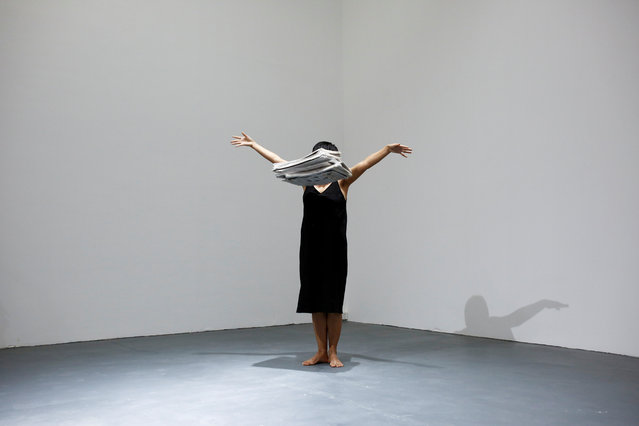 Chinese performance artist Yi Fei drops a pile of newspapers as she performs her piece “No News” at the OPEN international performance art festival in the Songzhuang art colony outside Beijing on October 4, 2017. (Photo by Thomas Peter/Reuters) 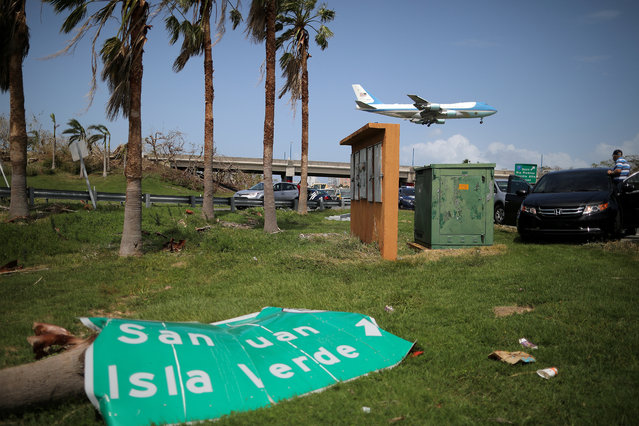 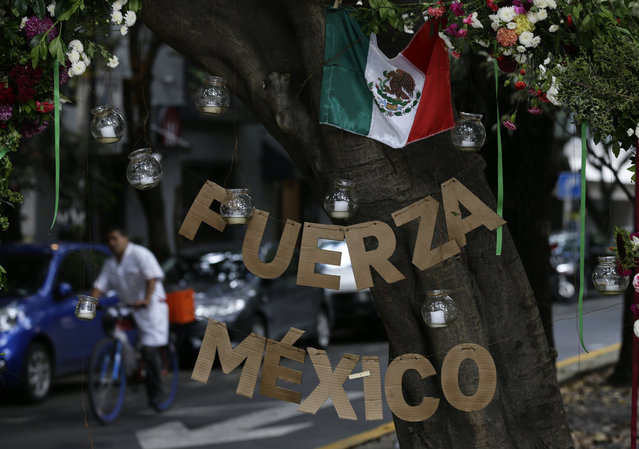 A memorial for victims of last weeks 7.1 earthquake stands in the Condesa neighborhood, where some buildings collapsed, in Mexico City, Tuesday, October 3, 2017. Across Mexico City, some 40 buildings collapsed in the earthquake and hundreds of others were so severely damaged they will either have to be demolished or receive major structural reinforcement. (Photo by Marco Ugarte/AP Photo) 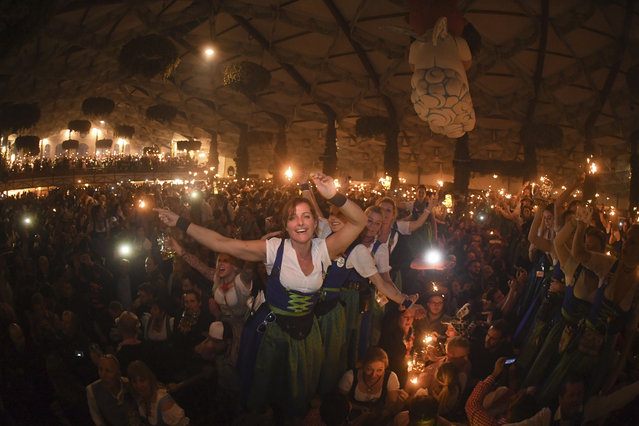 In this October 3, 2017 photo waitresses celebrate after closing of a tent on the last day of the Oktoberfest beer festival in Munich, southern Germany. (Photo by Felix Hoerhager/DPA via AP Photo) 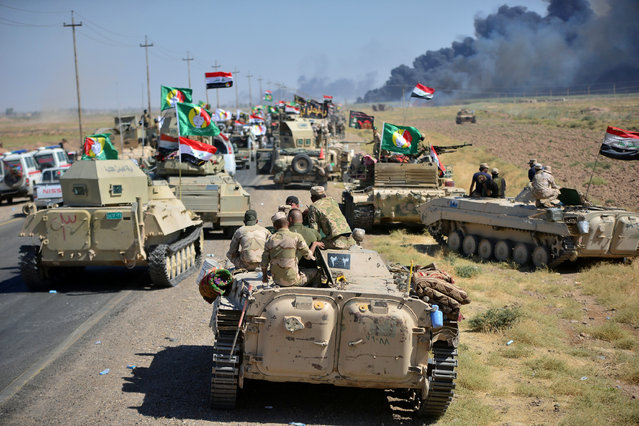 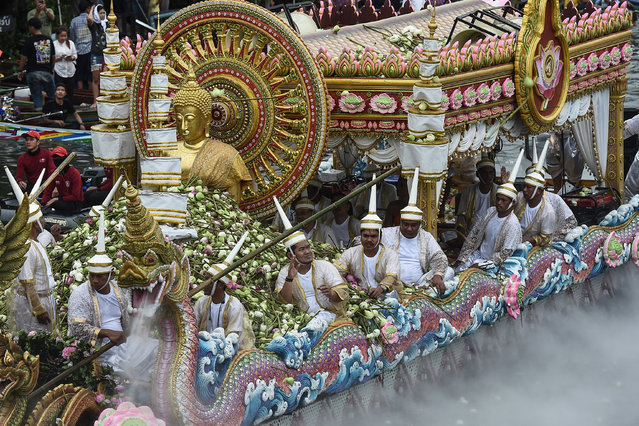 A golden statue of Buddha sits on a float during the Rab Bua (Lotus Receiving) festival to mark the end of Buddhist Lent in the central Thai province of Samut Prakan on October 4, 2017. (Photo by Lillian Suwanrumpha/AFP Photo) 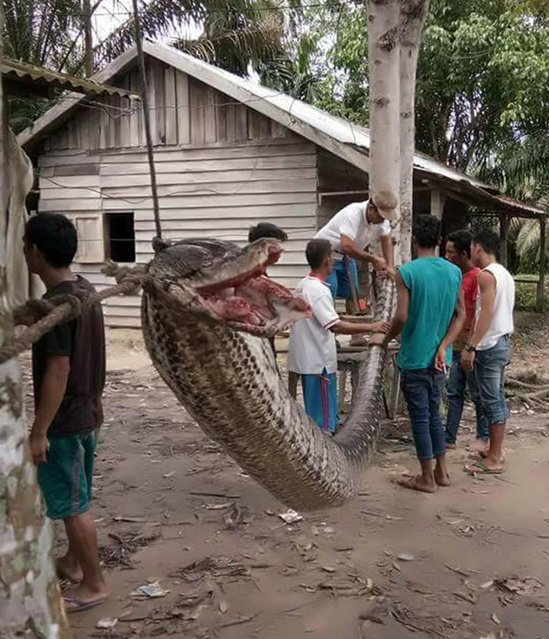 This handout picture taken on September 30, 2017 and released on October 4, 2017 by the Batang Gansal Police shows villagers beside a 7.8 metre (25.6 foot) long python which was killed after it attacked an Indonesian man, nearly severing his arm, in the remote Batang Gansal subdistrict of Sumatra island Hungry locals later killed the snake and displayed its carcass in the village before dicing it up, frying it and feasting on it. (Photo by AFP Photo/Batang Gansal Police)
Edit Del
05 Oct 2017 07:36:00, post received 0 comments
Publication archive:
←   →
Popular tags:
All tags
Last searches: