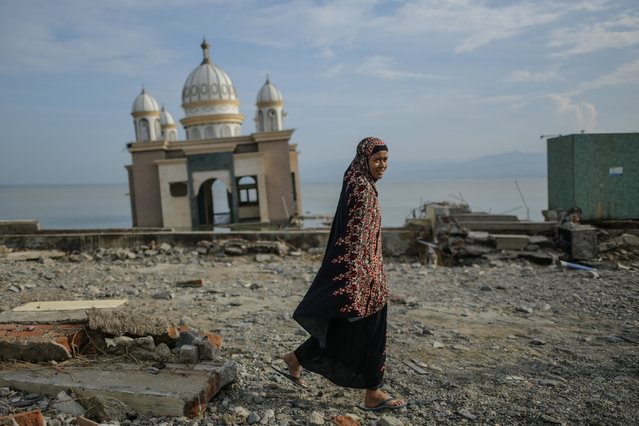 A resident walks past a damaged mosque by the tsunami-devastated coast in Palu, Indonesia's Central Sulawesi on October 4, 2018, after an earthquake and tsunami hit the area on September 28. The death toll in Indonesia's twin quake-tsunami disaster passed 1,400 Wednesday, with time running out to rescue survivors and the UN warning of “vast” unmet needs that have fuelled looting. (Photo by Mohd Rasfan/AFP Photo) 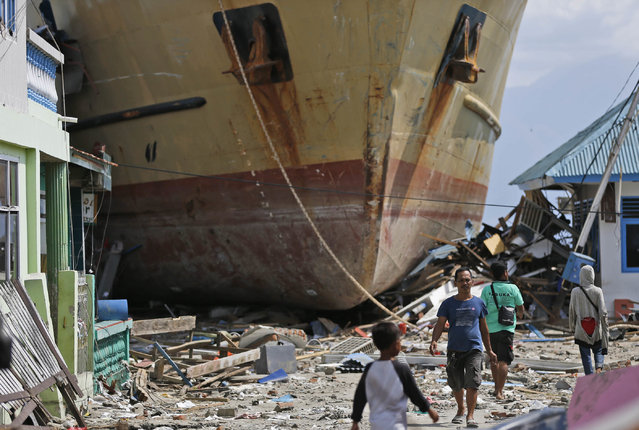 In this Thursday, October 4, 2018, photo, men walk past Sabuk Nusantara 39 which was swept ashore by the tsunami in Wani village on the outskirt of Palu, Central Sulawesi, Indonesia. The crew of the hulking ferry dropped by the tsunami in front of a row of houses in an Indonesian village say the wave that drove them onto land was a towering 10-15 meters or higher and came just several minutes after a quake made the ship bounce like a basketball. (Photo by Dita Alangkara/AP Photo) 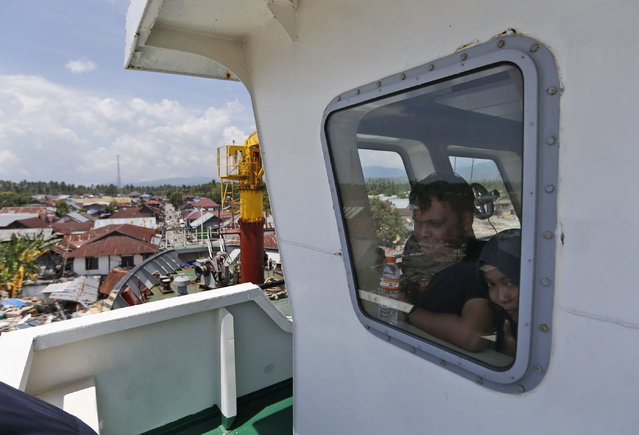 In this Thursday, October 4, 2018, photo, crew members look out of the window from the bridge of Sabuk Nusantara 39 which was swept ashore by the tsunami in Wani village on the outskirt of Palu, Central Sulawesi, Indonesia Indonesia. A week after the magnitude 7.5 quake and tsunami hit central Sulawesi, the crew of the ferry remain on board, waiting for an assessment team to arrive and decide if the ship, its propeller jutting out over the waterfront, could be put back to sea. (Photo by Dita Alangkara/AP Photo) 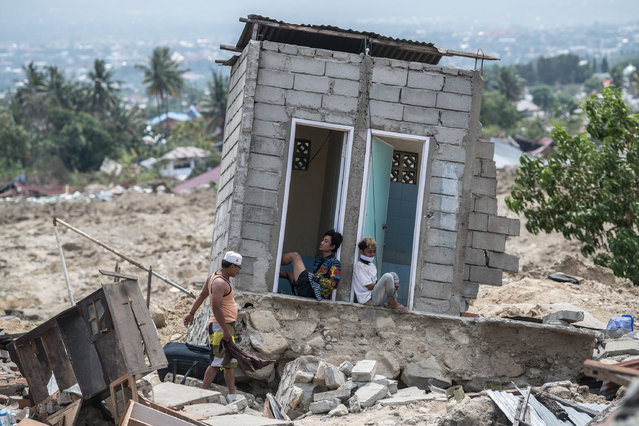 People rest in what was a toilet block in an area that was completely destroyed by an earthquake, on October 04, 2018 in Palu, Indonesia. The death toll from last weeks earthquake and tsunami has risen to at least 1,400, with time running out to rescue survivors six days after the disaster struck, and food, water, fuel and medicine were still slow to reach the hardest-hit areas outside the city of Palu on Sulawesi island. A tsunami triggered by a magnitude 7.5 earthquake slammed into Indonesia's coastline on the island of Sulawesi which destroyed or damaged over 66,000 homes as tensions are running high and Indonesia's military said it will shoot looters after desperate survivors emptied shops of food and water. (Photo by Carl Court/Getty Images) 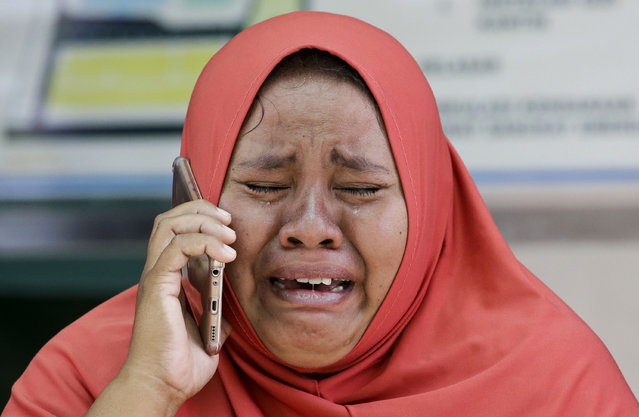 A woman cries as she uses the recovered mobile phone of her daughter who was killed in the massive earthquake at Palu, Central Sulawesi, Indonesia Thursday, October 4, 2018. The mother did not get the chance to see the body of her daughter after she was buried earlier in a mass grave. Life is on hold for thousands living in tents and shelters in the Indonesian city hit by a powerful earthquake and tsunami, unsure when they'll be able to rebuild and spending hours each day often futilely trying to secure necessities such as fuel for generators. (Photo by Aaron Favila/AP Photo) 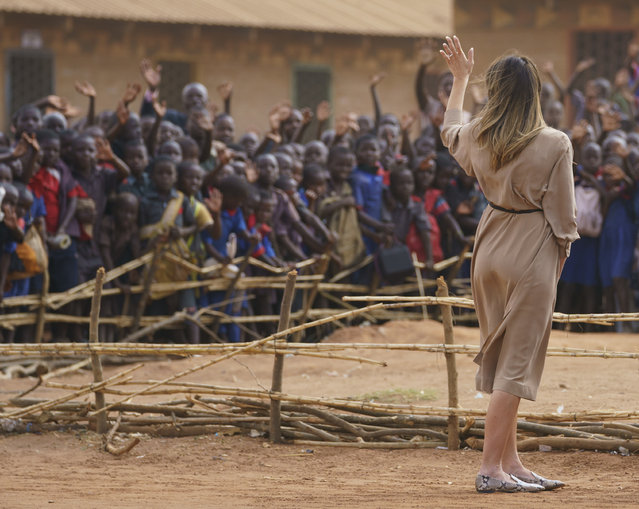 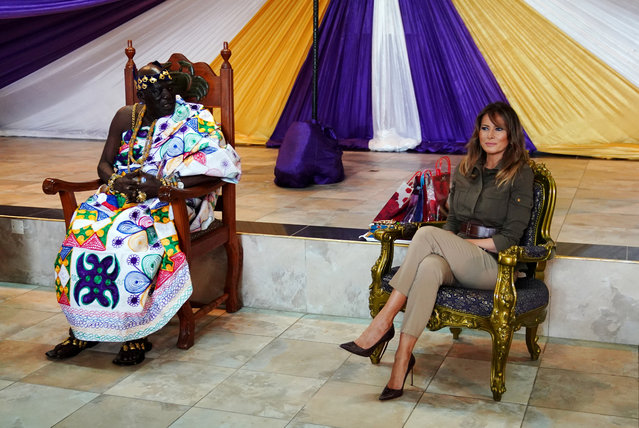 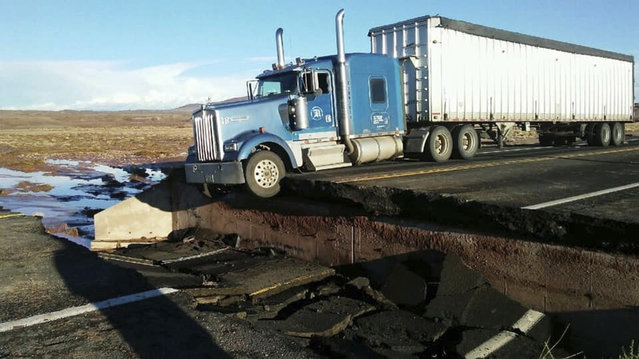 A semi truck is perched on the edge of a washed out stretch of U.S. 89 near Cameron, Ariz., on Thursday, October 4, 2018. The Arizona Department of Public Safety says a vehicle collision occurred there late Wednesday that killed at least one person. (Photo by Coconino County via AP Photo) 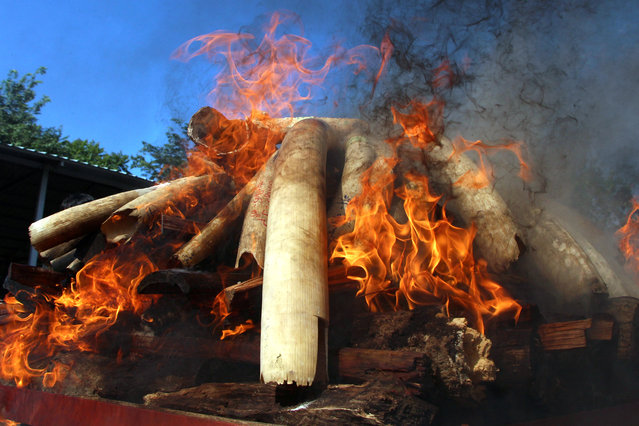 Flames rise from confiscated pieces of ivory as they are burned along with illegal wildlife parts by Myanmar's Ministry of Natural Resources and Environmental Conservation in Naypyidaw, Myanmar on October 4, 2018. (Photo by Myo Kyaw Soe/Reuters) 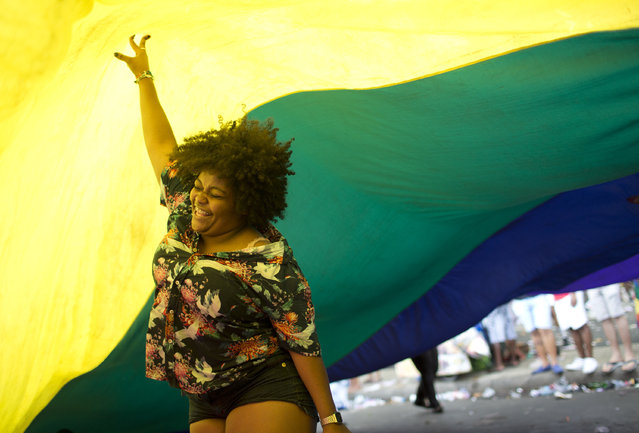 A woman dances under a giant rainbow flag during the annual Gay Pride Parade along Copacabana beach in Rio de Janeiro, Brazil, Sunday, September 30, 2018. One week before Brazil's presidential elections, organizers coined the theme of the parade “Vote for ideas and not for people”, aiming to encourage people to vote for candidates who support gay and human rights. (Photo by Silvia Izquierdo/AP Photo) 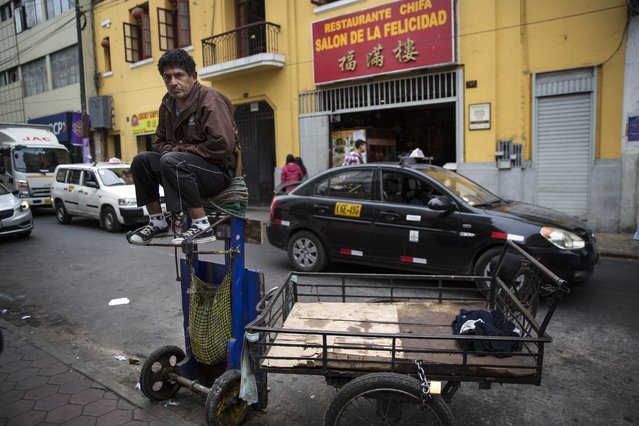 A Peruvian porter waits for customers in Lima's Chinatown, Monday, October 1, 2018. Despite accusations facing Lima's leading mayoral candidate Daniel Urresti, the ex-general remains popular with many people who support his hardline stance and yearn for a tough hand against crime in Lima, a city where rich neighborhoods have 10 times as many police officers as poor suburbs. (Photo by Rodrigo Abd/AP Photo) 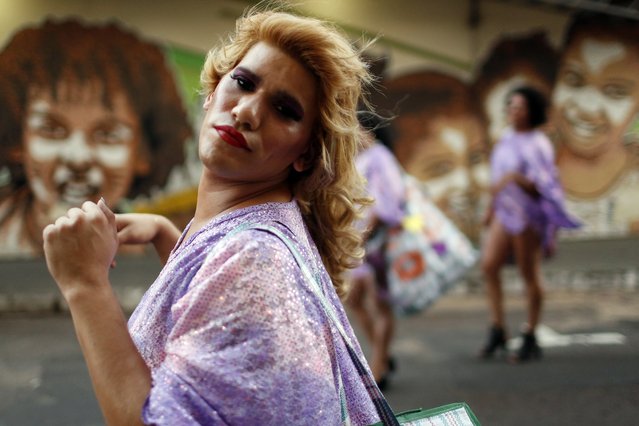 A transgender takes part in a LGTBI march demanding respect for the right to sexual diversity and instruction for children on sexual diversity, in Asuncion, Paraguay, Saturday, September 29, 2018. (Photo by Jorge Saenz/AP Photo) 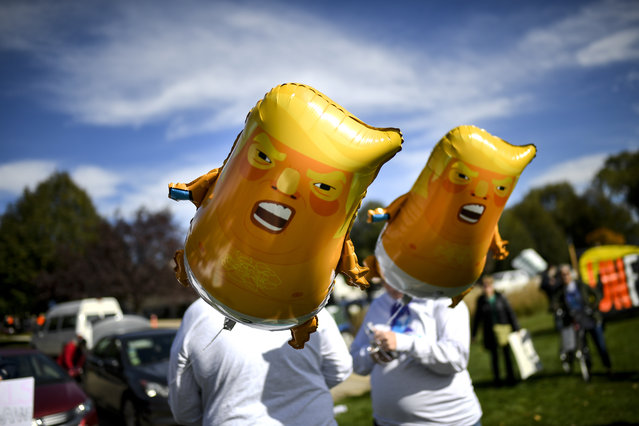 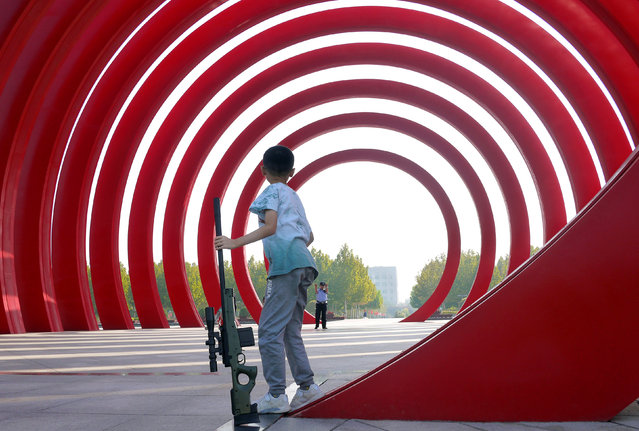 A policewoman gestures at a boy holding a plastic toy gun at a citizens' square on the outskirts of Tianjin, China on October 4, 2018. (Photo by Jason Lee/Reuters) 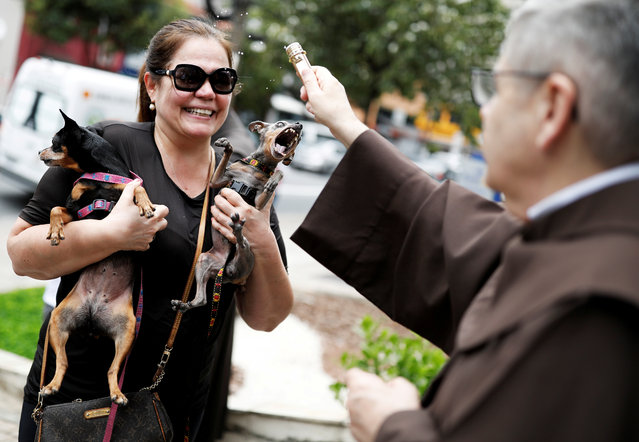 A woman holds her dogs as a priest blesses them outside Sao Francisco de Assis (Saint Francis of Assisi) Church in Sao Paulo, Brazil, October 4, 2018. Pet owners bring their animals to be blessed every year on the day of St. Francis of Assisi, patron saint of animals. (Photo by Nacho Doce/Reuters) 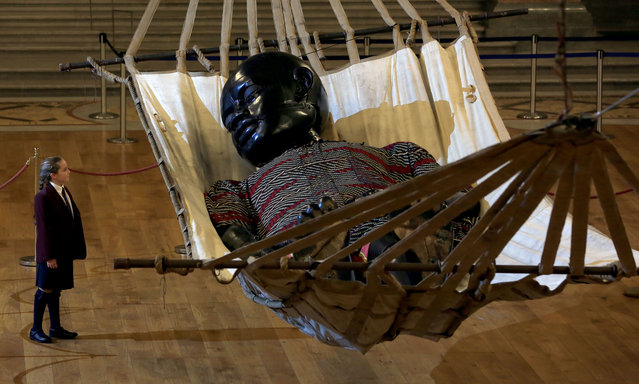 The Royal De Luxe theatre company's 20ft tall “Little Boy Giant” sleeps in St George's Hall, one of the giant Royal De Luxe street puppets that will be taking part in Liverpool’s Dream’, on October 4, 2018 in Liverpool, England. French street theatre company Royal de Luxe will be putting on the popular Giant Puppet Show show throughout the city from Oct 4-6. The giant puppet boy is sleeping in the hall before awakening to tour the streets as part of a year long celebration of 10 years since Liverpool held the European Capital of Culture title. The festival is the last ever showing of the popular French Royal de Luxe Theatre puppets. (Photo by Peter Byrne/PA Wire) 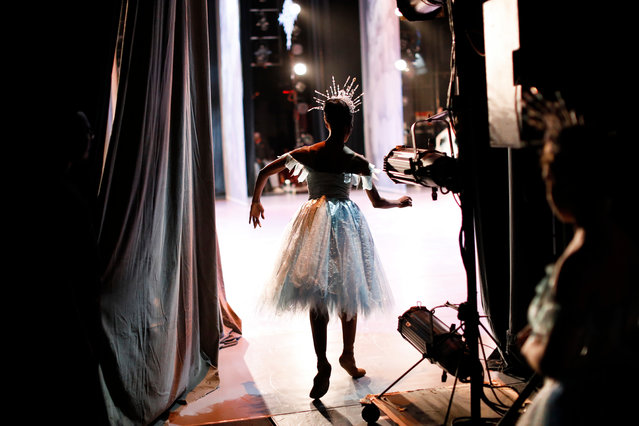 A Ballet dancer prepares backstage during the final dress rehearsal for the famous Nutcracker ballet by Pyotr Tchaikovsky at the Joburg Ballet, Johannesburg, South Africa, 04 October 2018. The premiere of Nutcracker is scheduled for 05 October and the show will run for two weeks. (Photo by Kim Ludbrook/EPA/EFE)
Edit Del
05 Oct 2018 08:53:00, post received 0 comments
Publication archive:
←   →
Popular tags:
All tags
Last searches: