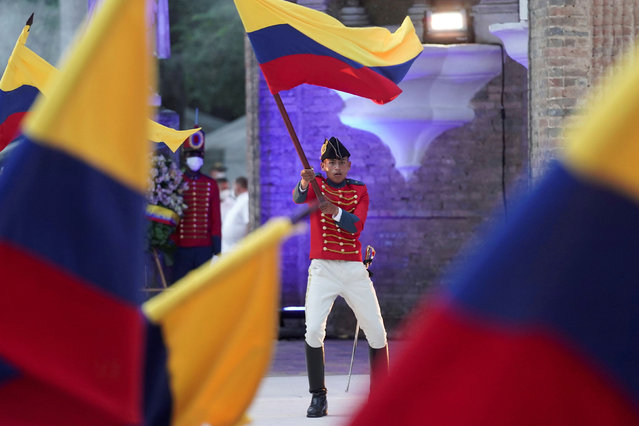 A soldier dressed in a historical uniform waves a Colombian flag at an event attended by President Ivan Duque to mark the bicentennial of the country's first constitution, in Villa del Rosario, Colombia on October 6, 2021. (Photo by Nathalia Angarita/Reuters) 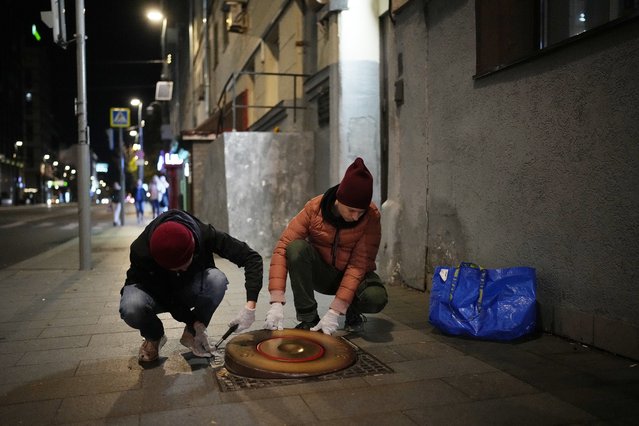 Activists set up an installation featuring a spent bullet cartridge outside a Moscow apartment building where reporter Anna Politkovskaya was gunned down on Oct. 7, 2006, in Moscow, Russia, early Thursday, October 7, 2021. Politkovskaya's colleagues sharply criticized the Russian authorities for failing to track down the mastermind of her killing 15 years ago, saying the official probe has effectively fizzled. (Photo by Alexander Zemlianichenko/AP Photo) 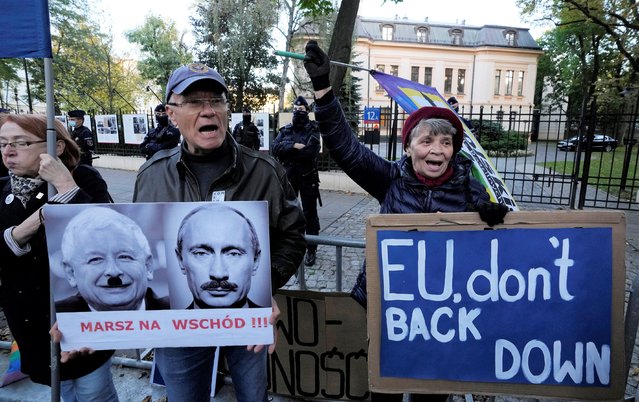 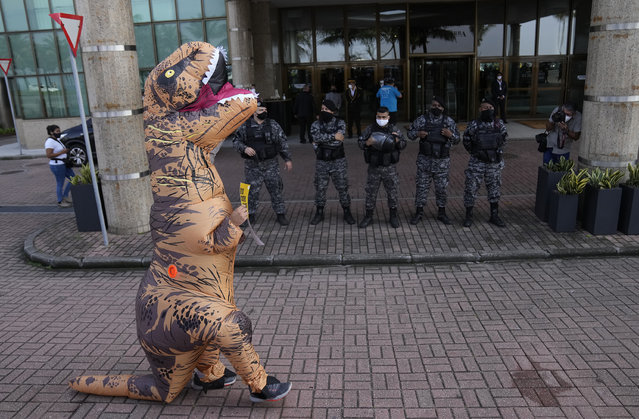 A protester in a dinosaur costume walks past police outside the Windsor hotel to show opposition to an auction taking place here for oil and gas exploration close to protected national marine park Fernando de Noronha, in Rio de Janeiro, Brazil, Thursday, October 7, 2021. Companies are competing for the exploration and production of oil and gas in the sedimentary basins of Campos, Santos, Potiguar and Pelotas. (Photo by Silvia Izquierdo/AP Photo) 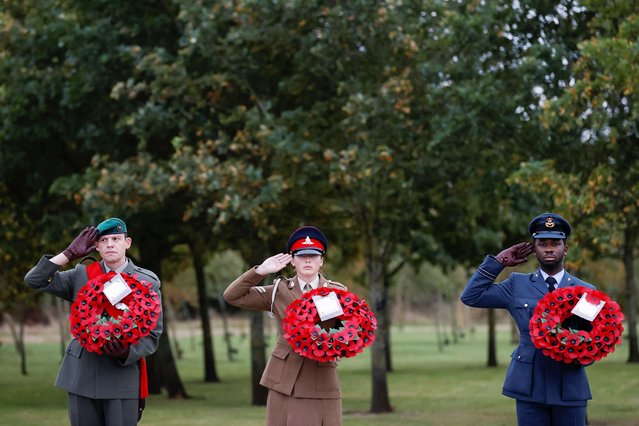 Members of military hold wreaths during a memorial service at the Camp Bastion Memorial at the National Memorial Arboretum in Staffordshire, Britain, October 7, 2021. (Photo by Phil Noble/Reuters) 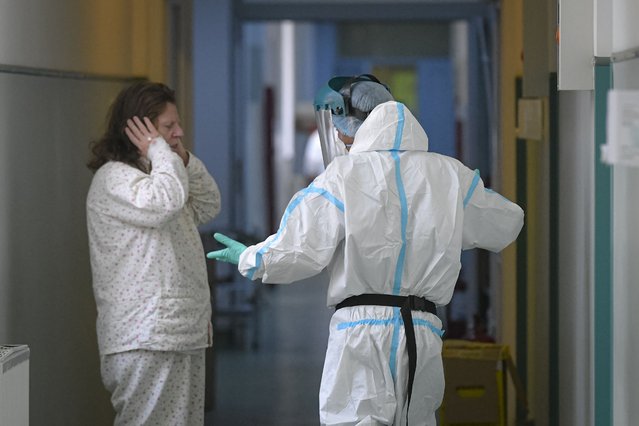 A patient complains about the noise from life support equipment to a member of the medical staff outside a COVID-19 ICU unit at the Marius Nasta National Pneumology Institute in Bucharest, Romania, Wednesday, October 6, 2021. Romania is facing an accelerated increase of daily COVID-19 infections with 14744 new cases in the last 24 hours and 331 reported deaths, the highest ever number of fatalities in one day, as authorities report they ran out of COVID-19 ICU beds at national level . (Photo by Andreea Alexandru/AP Photo) 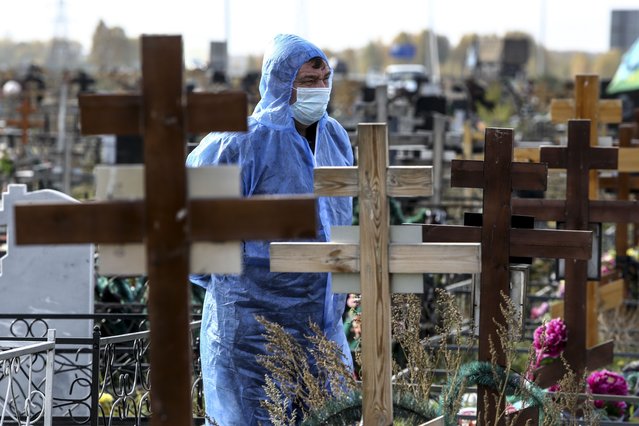 A grave digger wearing a protective suit stands during a a COVID-19 victim burial at a cemetery outside in Omsk, Russia, Thursday, October 7, 2021. Russia's daily coronavirus infections have soared to their highest level so far this year as authorities have struggled to control a surge in new cases amid a slow pace in vaccinations and few restrictions in place. The daily coronavirus death toll topped 900 for a second straight day with 924 new deaths reported Thursday. Russia already has Europe's highest death toll in the pandemic and a conservative way of calculating the number suggests the actual number could be even higher. (Photo by AP Photo/Stringer) 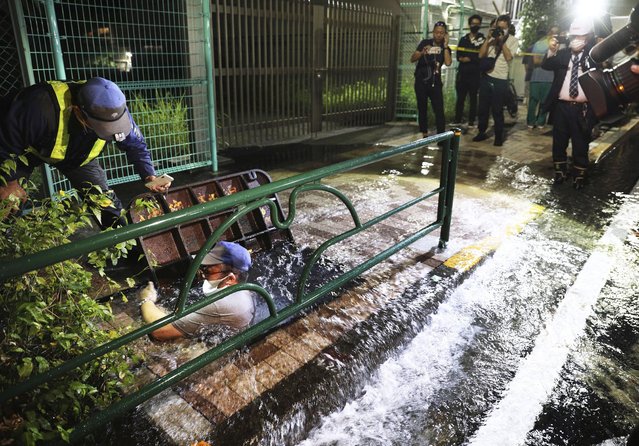 A road is soaked in water following an earthquake, in Tokyo, early Friday, October 8, 2021. A powerful earthquake shook the Tokyo area on Thursday night, halting trains and subways. (Photo by Kyodo News via AP Photo) 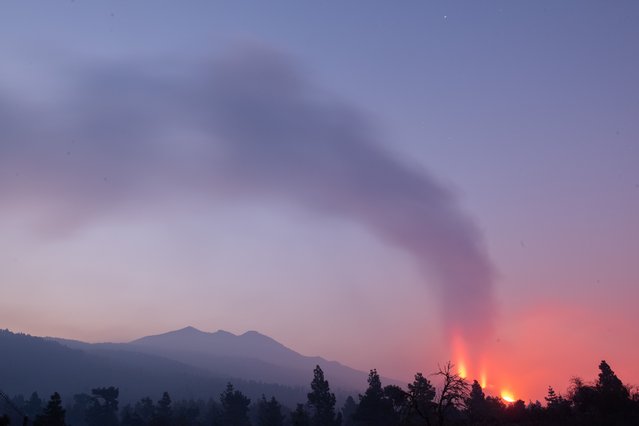 Lava and ashes are expelled by several vents of the Cumbre Vieja volcano in a photo taken from the town of Tacande, on the 19th day of eruption in a row in La Palma island, Canary Islands, southwestern Spain, 07 October 2021. La Palma's airport is inoperative due to the volcanic ashes covering the tarmacs, the Spanish Airports Authority AENA announced. (Photo by Carlos de Saa/EPA/EFE) 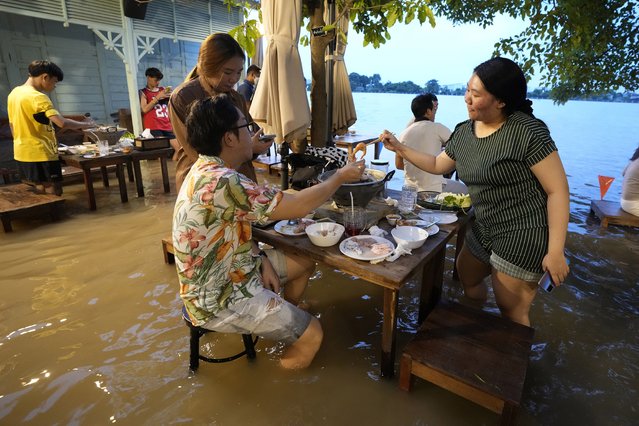 Customers of the riverside Chaopraya Antique Café enjoy themselves despite the extraordinary high water levels in the Chao Phraya River in Nonthaburi, near Bangkok, Thailand, Thursday, October 7, 2021. The flood-hit restaurant has become an unlikely dining hotspot after fun-loving foodies began flocking to its water-logged deck to eat amid the lapping tide. Now, instead of empty chairs and vacant tables the “Chaopraya Antique Café” is as full as ever, offering an experience the canny owner has re-branded as “hot-pot surfing”. (Photo by Sakchai Lalit/AP Photo) 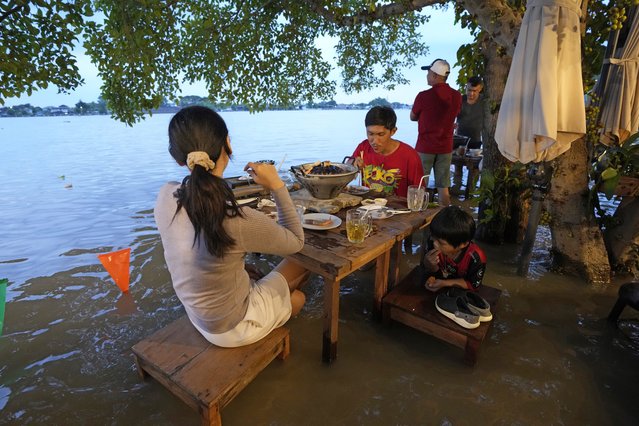 Customers of the riverside Chaopraya Antique Café enjoy themselves despite the extraordinary high water levels in the Chao Phraya River in Nonthaburi, near Bangkok, Thailand, Thursday, October 7, 2021. (Photo by Sakchai Lalit/AP Photo) 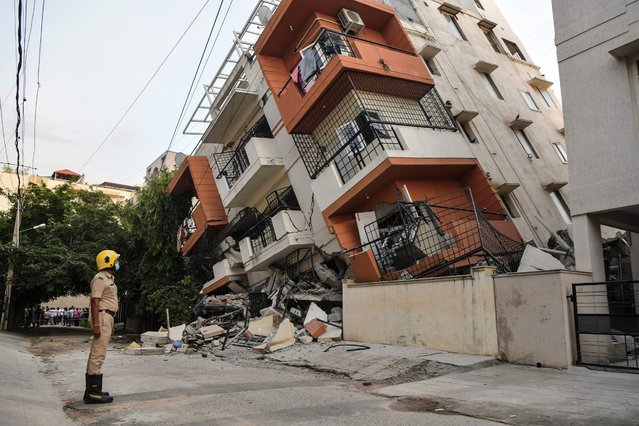 A fire force personnel watches as a multi-storey apartment building collapsed without any casualties reported, in Bangalore on October 7, 2021. (Photo by Manjunath Kiran/AFP Photo) 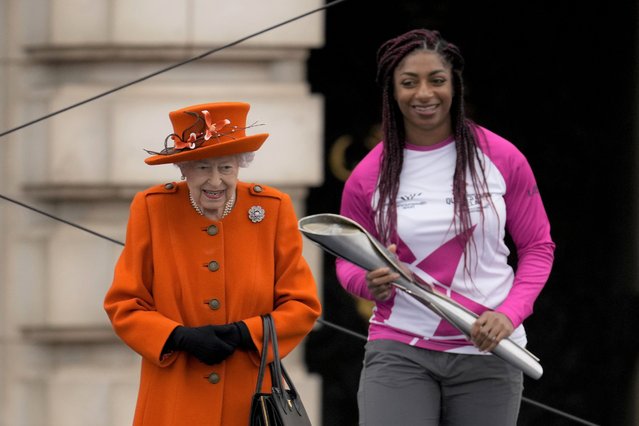 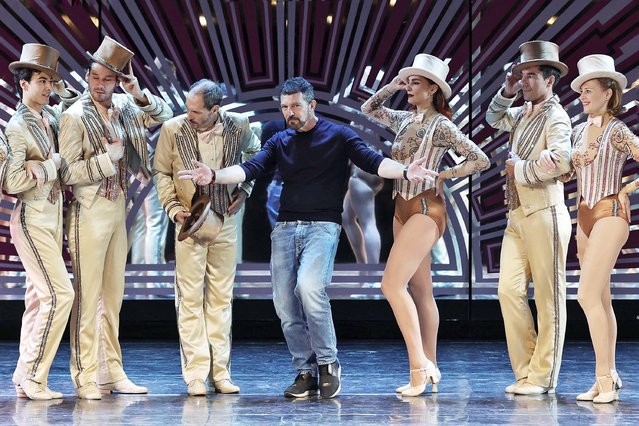 Actor Antonio Banderas (C) poses with the cast during the presentation of the musical “A chorus line” at the Teatro Calderon on October 7, 2021 in Madrid, Spain. Directed by Antonio Banderas and Baayork Lee, the musical is about a selection of eight dancers from a group of 26 to form a chorus line. Actor Manuel Bandera will play the character of “Zach”, a Broadway choreographer looking for the best dancers. (Photo By Eduardo Parra/Europa Press via Getty Images) 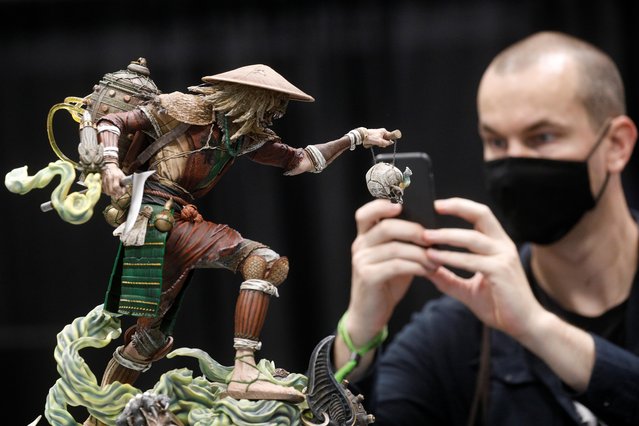