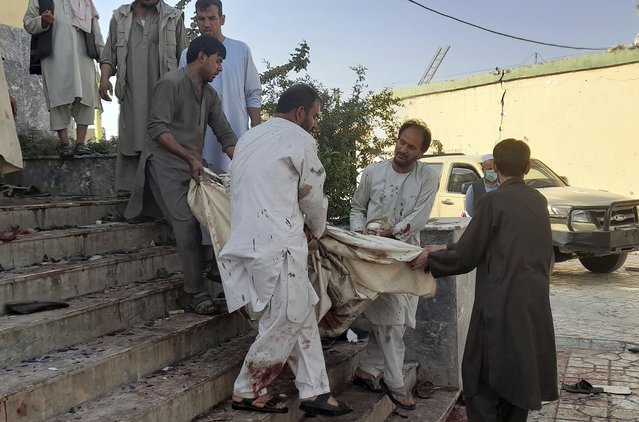 People carry the body of a victim from a mosque following a bombing in Kunduz province, northern Afghanistan, Friday, October 8, 2021. A powerful explosion in a mosque frequented by a Muslim religious minority in northern Afghanistan on Friday has left several casualties, witnesses and the Taliban's spokesman said. (Photo by Abdullah Sahil/AP Photo) 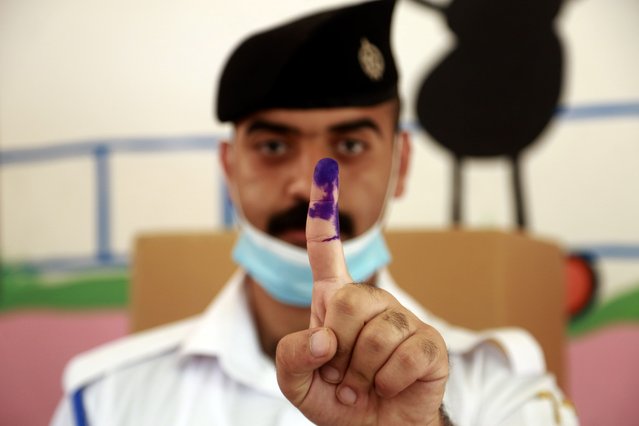 An Iraqi federal policeman ​displays his ink-stained finger at a polling center during the early voting for security forces ahead of Sunday's parliamentary election in Baghdad, Iraq, Friday, October 8, 2021. (Photo by Hadi Mizban/AP Photo) 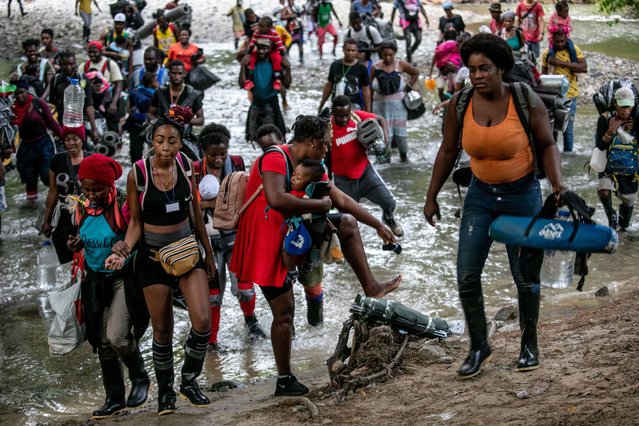 A mother pauses to put back on dry socks and shoes after crossing a river in the Darien Gap in route to the United States on October 07, 2021 near Acandi, Colombia. The passage through dense rainforest is considered the most dangerous stretch for migrants traveling from South America to the U.S. During the trip, torrential downpours lead to sudden river floodings, often resulting in migrant drownings along the way. Reports of robberies and rapes are common, especially after migrants pass the remote mountain border crossing from Colombia into Panama. More than 70,000 migrants have traveled through the Darien Gap this year, according to Panamanian authorities. Most of the migrants in recent months have been Haitians, many of whom had been living in Chile and Brazil since the 2010 Haitian earthquake. The Darien Gap is the 66-mile stretch of rainforest between North and South America where the Panamerican Highway was never completed due to severe terrain, enormous cost and myriad environmental concerns. (Photo by John Moore/Getty Images) 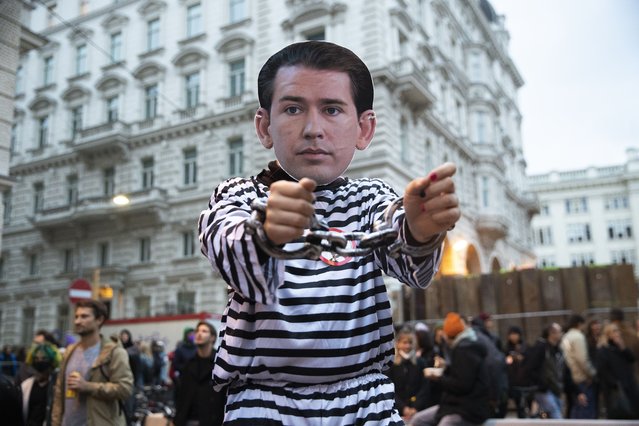 A demonstrator dresses up as Austrian Chancellor Sebastian Kurz in handcuffs attends a protest against the Chancellor in fronton the headquarters the Austrian Peoples Party party in Vienna, Austria, Thursday, October 7, 2021. (Photo by Lisa Leutner/AP Photo) 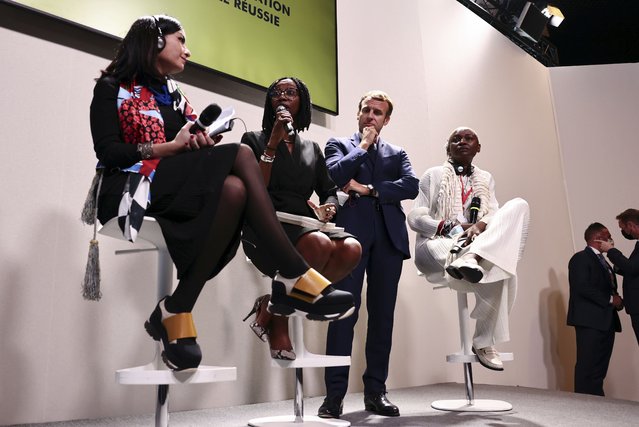 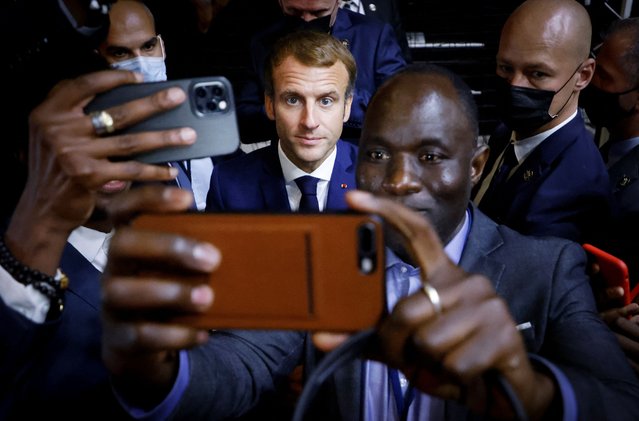 French President Emmanuel Macron (C) poses for a selfie after a basket-ball game during an Africa-France 2021 Summit in Montpellier, southern France, on October 8, 2021. (Photo by Ludovic Marin/AFP Photo) 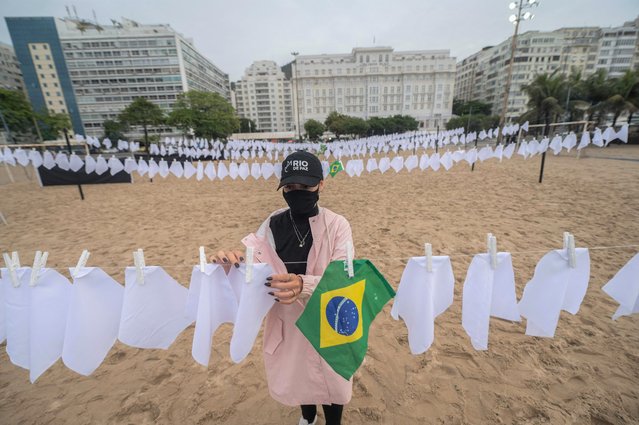 A demonstrator from the Rio de Paz human rights activist group hangs white flags symbolizing the deaths of almost 600,000 Brazilian to the novel coronavirus COVID-19, at Copacabana beach in Rio de Janeiro, Brazil, on October 8, 2021. The group protested against the rising figures of COVID-19 deaths in the country which is about to surpass 600,000 mortal victims. (Photo by Mauro Pimentel/AFP Photo) 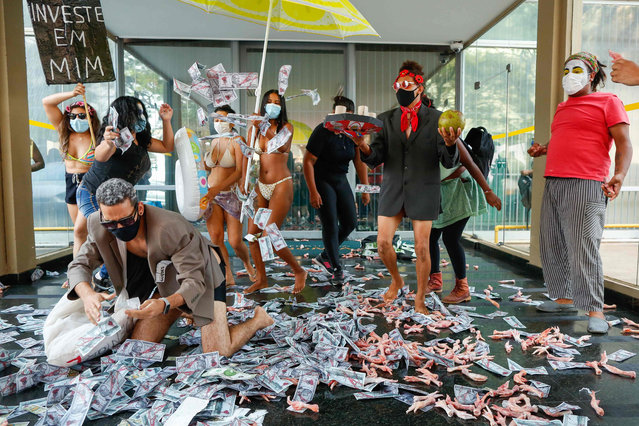 People protest against Brazilian Economy Minister Paulo Guedes at the Economy Ministry in Brasilia on October 7, 2021, just days after he was mentioned in the “Pandora Papers” media investigation exposing world leaders' use of tax havens. Guedes, mentioned in the international journalistic investigation on the concealment of assets in tax havens, assured that all his private activities were declared to the Brazilian treasury and are legal. (Photo by Sergio Lima/AFP Photo) 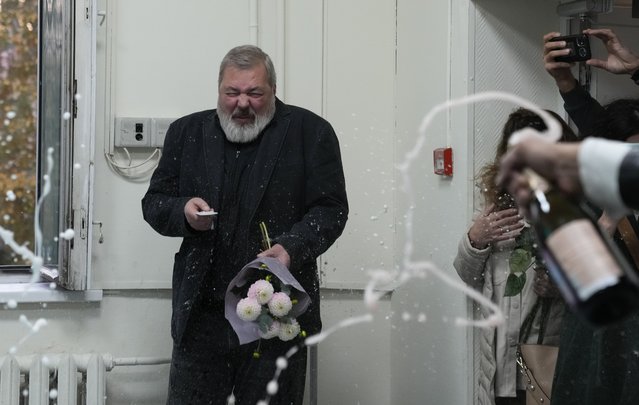 Colleagues pour champaign on Novaya Gazeta editor Dmitry Muratov at the Novaya Gazeta newspaper, in Moscow, Russia, Friday, October 8, 2021. The 2021 Nobel Peace Prize has been awarded to journalists Maria Ressa of the Philippines and Dmitry Muratov of Russia. The Norwegian Nobel Committee cited their fight for freedom of expression, stressing that it is vital in promoting peace. (Photo by Alexander Zemlianichenko/AP Photo) 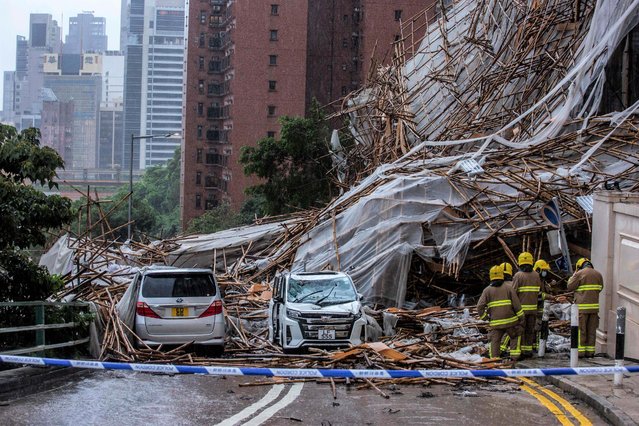 Rescue personnel at the scene where bamboo scaffolding by a high-rise residential building collapsed onto a road, following strong winds and heavy rain from weather patterns from a tropical storm, in Hong Kong on October 8, 2021. (Photo by Isaac Lawrence/AFP Photo) 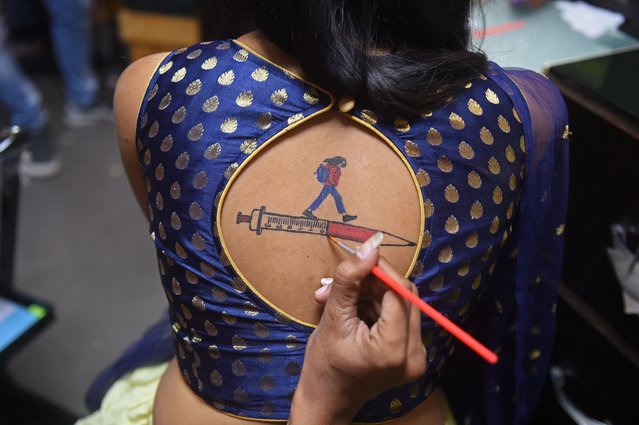 A Garba (folk dance) participant gets her back painted with an awareness message on vaccination against the Covid-19 coronavirus during the ongoing Navratri festival in Ahmedabad on October 8, 2021. (Photo by Sam Panthaky/AFP Photo) 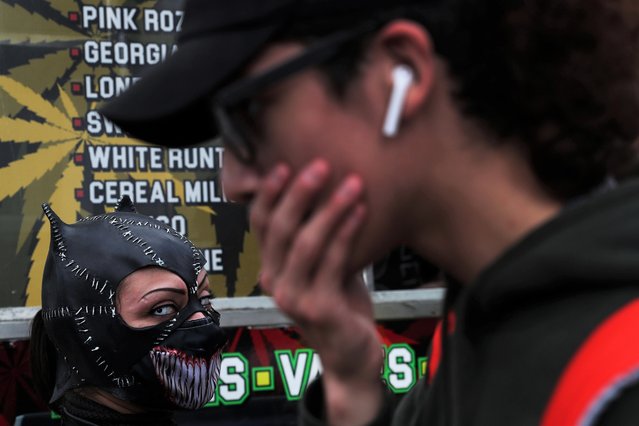 A woman dressed in costume looks on, amid the coronavirus disease (COVID-19) pandemic, as others arrive for the 2021 New York Comic Con at the Jacob Javits Convention Center in New York City, U.S., October 8, 2021. (Photo by Shannon Stapleton/Reuters) 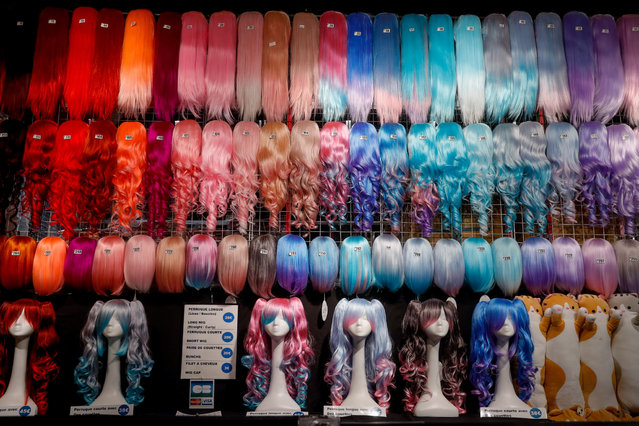 Wigs are on display during the Made in Asia trade fair at Brussels Expo, in Brussels, Belgium, 08 October 2021. The fair dedicated to Asian culture offers displays of food, video games, costumes, cosplay, among others, and runs from 08 to 10 October 2021. (Photo by Stephanie Lecocq/EPA/EFE) 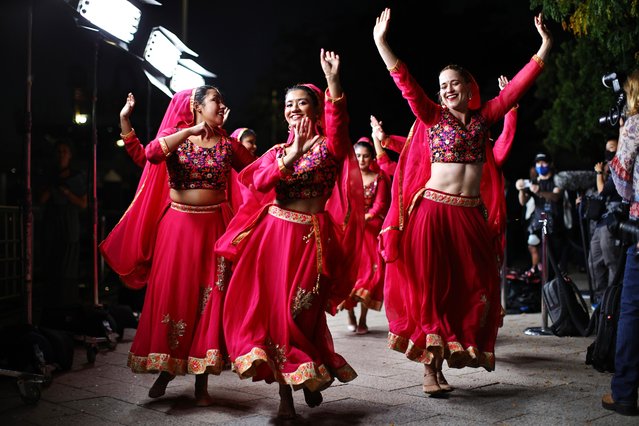 A view of a performance at the 2021 Hudson River Park Gala at Pier Sixty at Chelsea Piers on October 07, 2021 in New York City. (Photo by Dimitrios Kambouris/Getty Images for Friends of Hudson River Park) 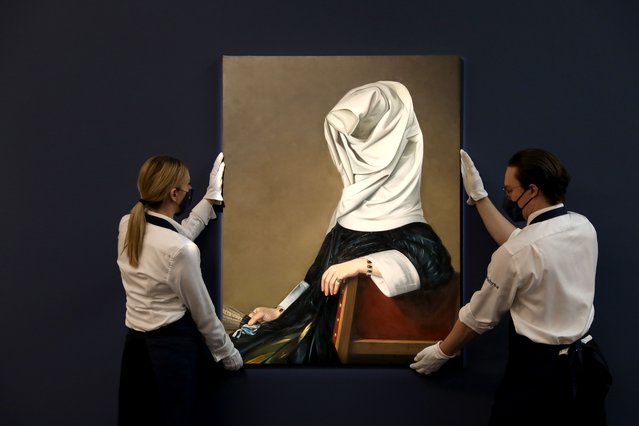