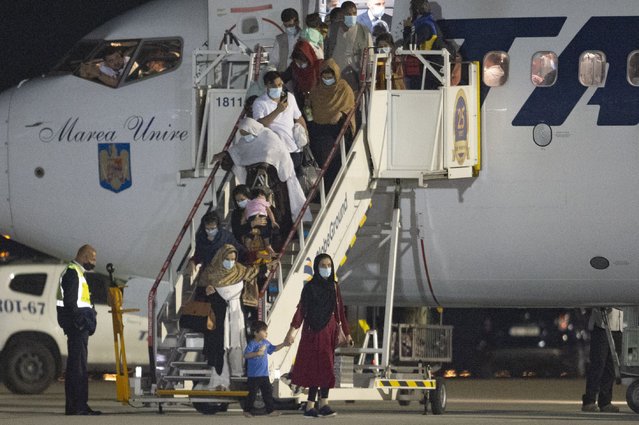 Afghan citizens evacuated by Romanian authorities from Afghanistan disembark an airplane at the Baza 90 military base after being flown in from Pakistan in Otopeni, near Bucharest, Romania, Thursday, September 9, 2021. The Romanian Foreign Ministry organized the evacuation of 156 Afghan citizens, former aides of the Romanian military that operated in Afghanistan, students, human rights activists, journalists, magistrates and their family members, of which 139 arrived to Romania on Thursday night. (Photo by Alexandru Dobre/AP Photo) 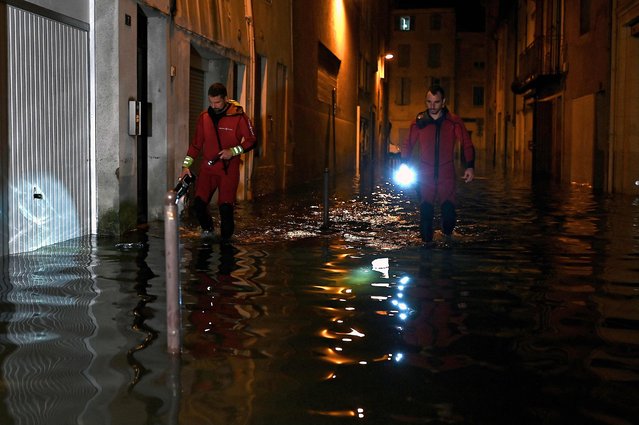 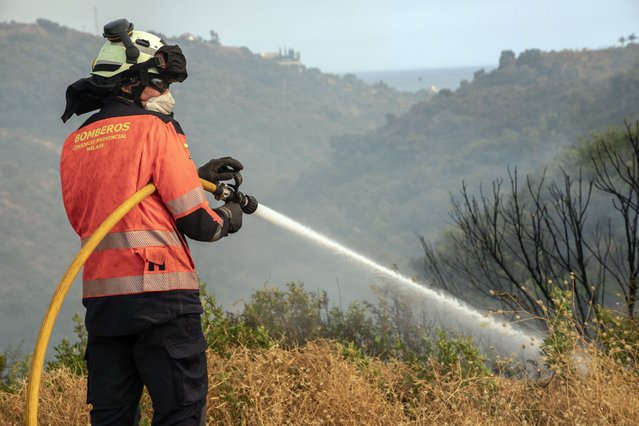 A forest firefighter works in a wildfire in Estepona, Spain, Thursday, September 9, 2021. Nearly 800 people have been evacuated from their homes and road traffic has been disrupted as firefighting teams and planes fight a wildfire in southwestern Spain. (Photo by Sergio Rodrigo/AP Photo) 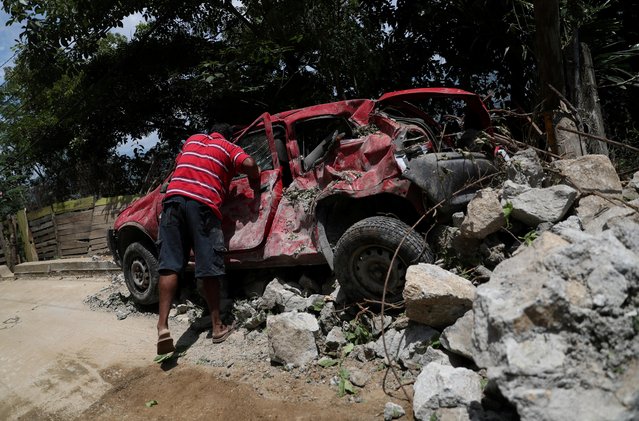 A man stands next to a damaged car in the aftermath of the earthquake in Acapulco, in Guerrero state, Mexico, September 9, 2021. (Photo by Edgard Garrido/Reuters) 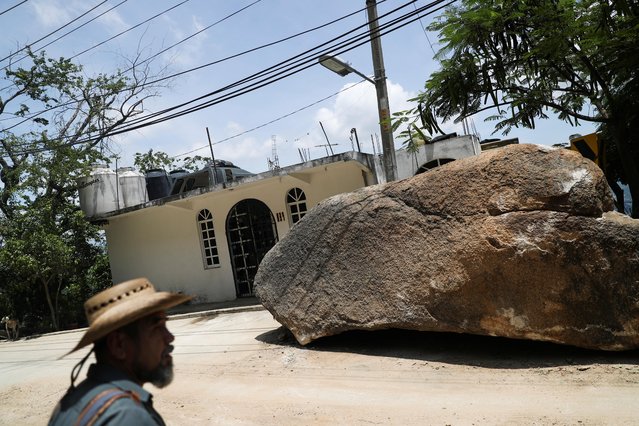 A massive rock partially blocks a road in the aftermath of the earthquake in Acapulco, in Guerrero state, Mexico, September 9, 2021. (Photo by Edgard Garrido/Reuters) 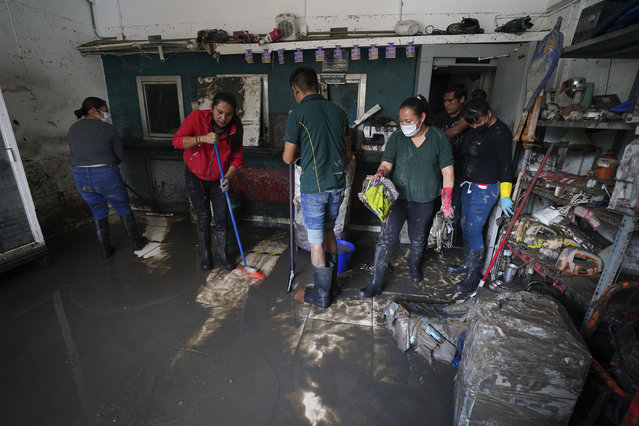 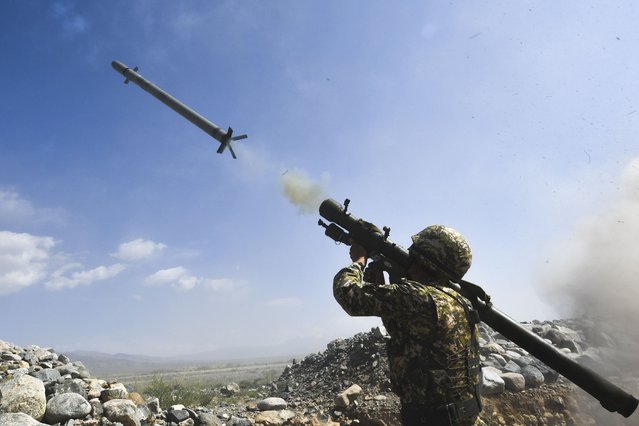 A Kyrgyzstan's soldier shoots from a portable air-defense system during a joint military exercises at the Edelweiss training ground, about 180 kilometers (113 miles) southeast of Bishkek, Kyrgyzstan, Thursday, September 9, 2021. Joint military exercises of the Collective Security Treaty Organization (CSTO) countries, including Russia, Kyrgyzstan and others, are being held in the Edelweiss range in Kyrgyzstan amid the situation in Afghanistan. (Photo by Vladimir Voronin/AP Photo) Kyrgyz servicemen take part in the “Rubezh-2021” joint military drills by the Collective Rapid Response Forces of the Collective Security Treaty Organisation (CSTO) member states, a military alliance led by Moscow, at the Edelweiss training area in Balykchi, some 200 km from Bishkek, on September 9, 2021. (Photo by Vyacheslav Oseledko/AFP Photo) 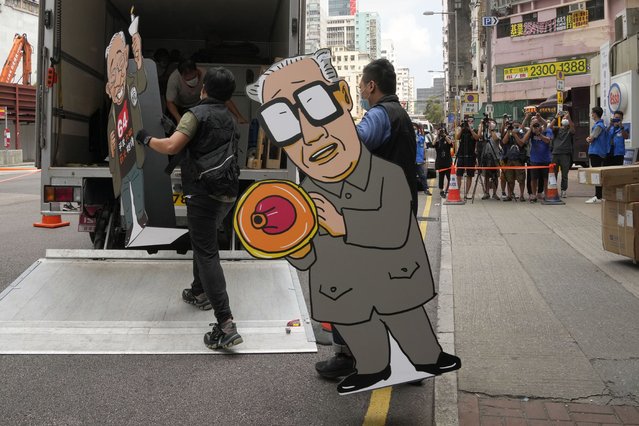 Police officers take away the cutout of the late former Chinese Premier Zhao Ziyang from the June 4th Museum as evidence, in Hong Kong. Thursday, September 9, 2021. National security police on Thursday raided the closed June 4 museum in Hong Kong, which commemorated the June 4, 1989 Tiananmen crackdown, a day after four core members of the Hong Kong Alliance in Support of Patriotic Democratic Movements of China were arrested. (Photo by Kin Cheung/AP Photo) 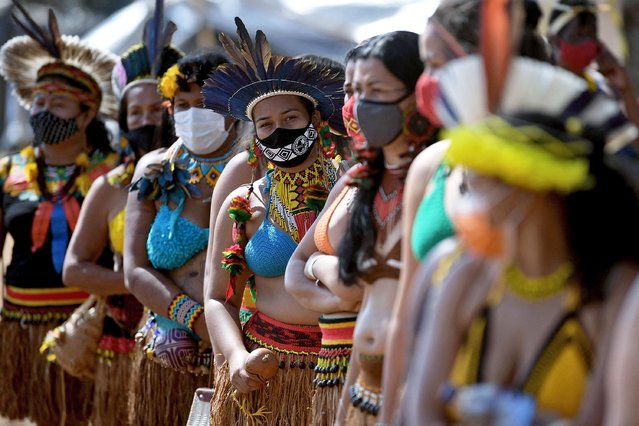 Indigenous women from the Pataxo tribe are seen during a demonstration for the demarcation of indigenous land in Brasilia, on September 8, 2021. The Supreme Federal Court of Brazil (STF) resumes this Wednesday a trial that could put in check hundreds of indigenous lands pending demarcation in the country. (Photo by Carl de Souza/AFP Photo) The ITER Tokamak machine is pictured in Saint-Paul-Lez-Durance, France, Thursday, September 9, 2021. Scientists at the International Thermonuclear Experimental Reactor in southern France took delivery of the first part of a massive magnet so strong its American manufacturer claims it can lift an aircraft carrier. (Photo by Daniel Cole/AP Photo) 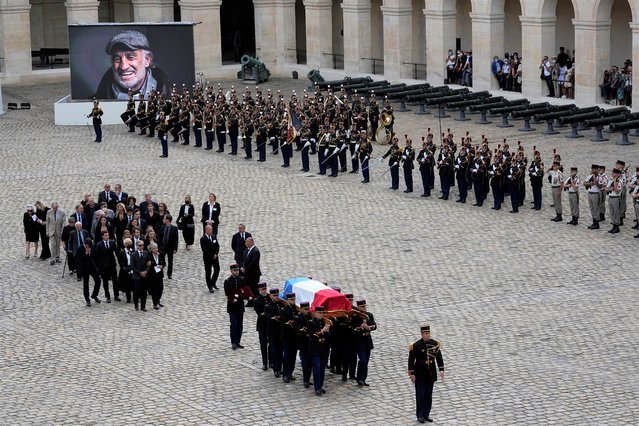 Republican Guards carry the coffin of Jean-Paul Belmondo after a tribute ceremony for the late French actor at the Hotel des Invalides, Thursday, September 9 2021 in Paris. The tributes for the star of iconic French New Wave film “Breathless” reflect his prominent role in France's cultural world and in living rooms, where families gathered around his films. Belmondo, whose crooked boxer's nose and rakish grin made him one of the country's most recognizable leading men, died at 88 earlier this week. (Photo by Michel Euler/AP Photo) 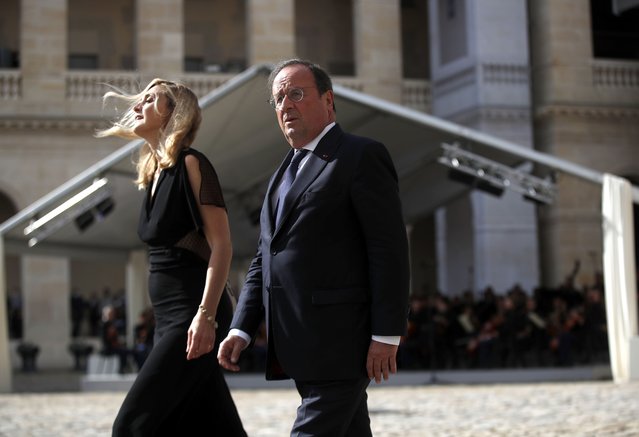 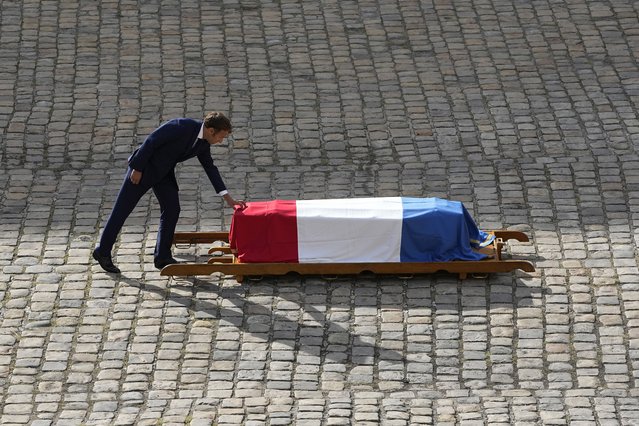 French President Emmanuel Macron touches the coffin of Jean-Paul Belmondo during a tribute ceremony for the late French actor at the Hotel des Invalides, Thursday, September 9 2021 in Paris. (Photo by Michel Euler/AP Photo) 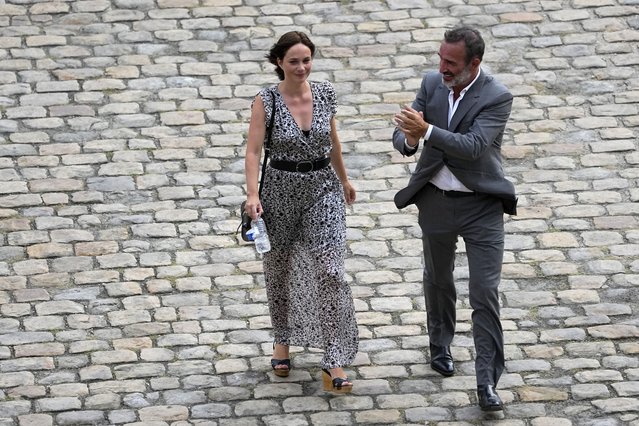 French actor Jean Dujardin and his wife Nathalie Pechalat leave after a tribute ceremony for actor Jean-Paul Belmondo at the Hotel des Invalides, Thursday, September 9 2021 in Paris. France is paying respects Thursday to screen legend Jean-Paul Belmondo with a solemn ceremony led by the president and a public viewing at Napoleon's final resting place. (Photo by Michel Euler/AP Photo) 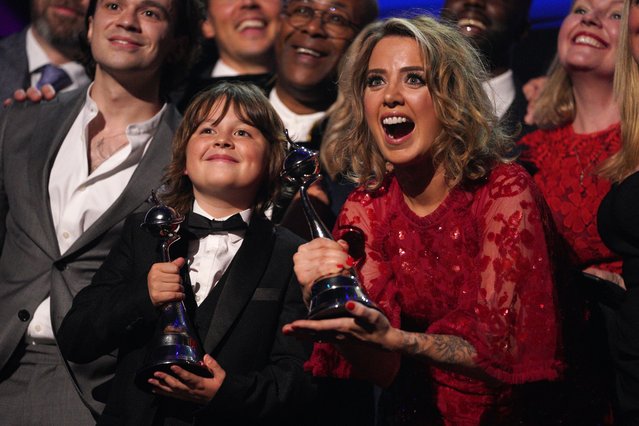 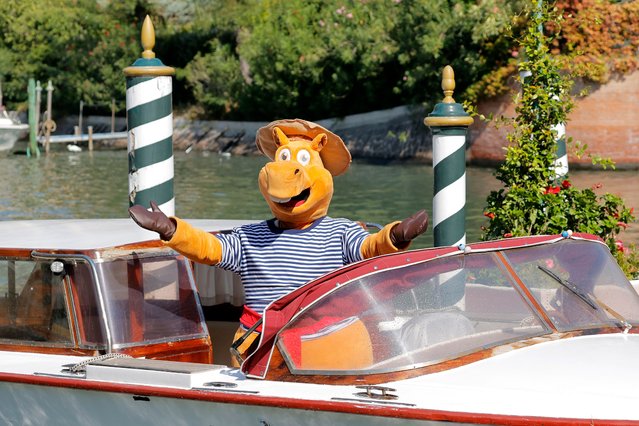 A character in costume arrives at the 78th Venice International Film Festival on September 09, 2021 in Venice, Italy. (Photo by John Phillips/Getty Images) 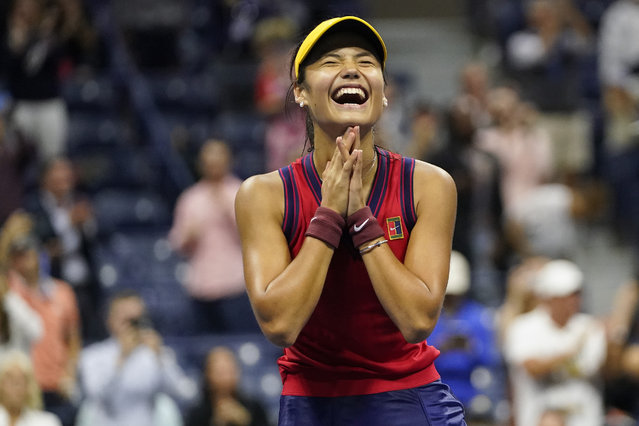 Emma Raducanu, of Great Britain, reacts after defeating Maria Sakkari, of Greece, during the semifinals of the US Open tennis championships, Thursday, September 9, 2021, in New York. (Photo by Frank Franklin II/AP Photo) 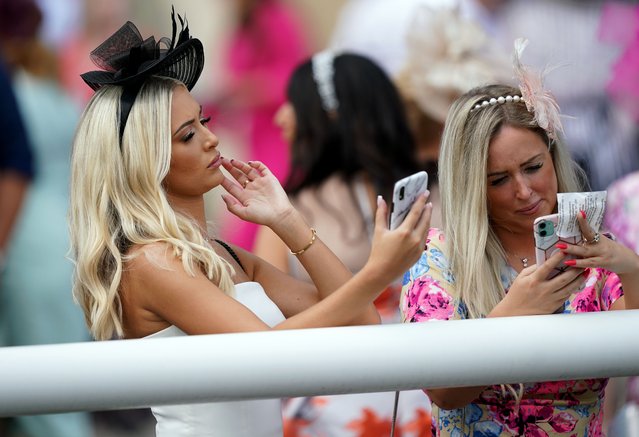 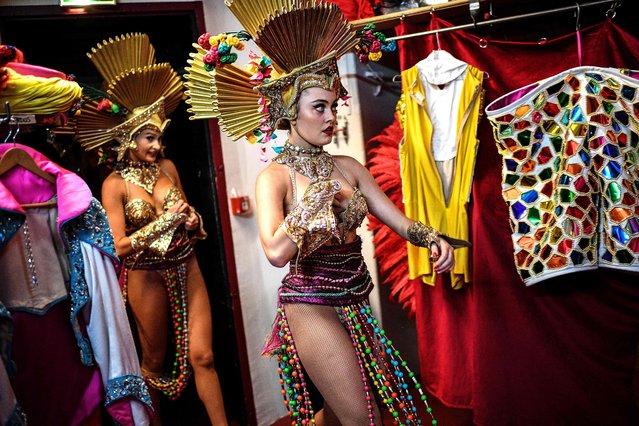 Dancers wait in the wings before performing in a full-dress rehearsal at the Moulin Rouge in Paris on September 8, 2021, two days ahead of the reopening of the cabaret following an 18-month closure amid the COVID-19 pandemic. Closed for a year and a half due to the pandemic, the Moulin Rouge and Le Lido, emblems of the crazy Parisian nights since 1889, are finally reopening. (Photo by Christophe Archambault/AFP Photo)
Edit Del
10 Sep 2021 10:07:00, post received 0 comments
Publication archive:
←   →
Popular tags:
All tags
Last searches: