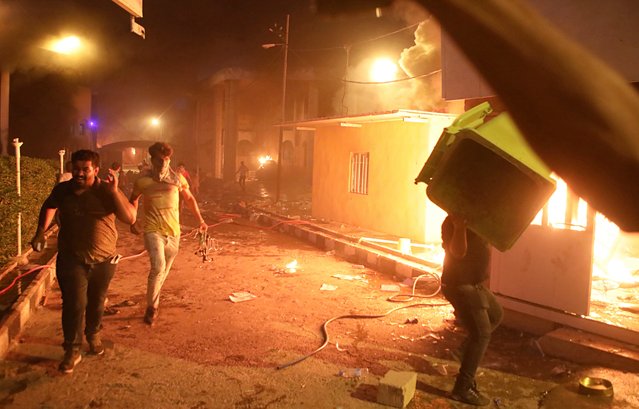 Protesters storm and burn the Iranian consulate building in Basra, 340 miles (550 km) southeast of Baghdad, Iraq, Friday, September 7, 2018. Hundreds of angry protesters in Basra took to the streets on Thursday night. Some clashed with security forces, lobbing Molotov cocktails and setting fire to a government building as well as the offices of Shiite militias. At least three people were shot dead in confrontations with security forces. (Photo by Nabil al-Jurani/AP Photo) 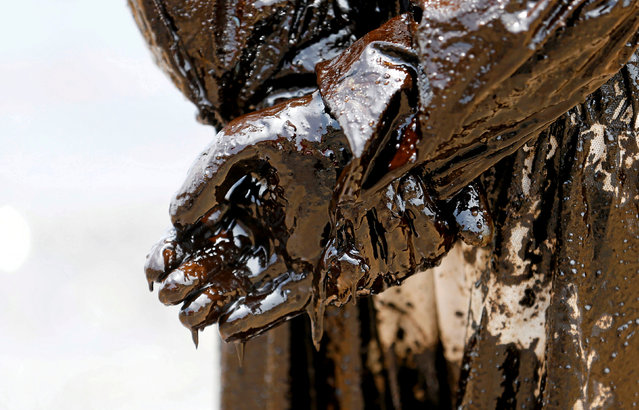 A member of the Sri Lankan coast guard is covered in oil as he works to remove an oil spill at a beach in Uswetakeiyawa, Sri Lanka September 10, 2018. (Photo by Dinuka Liyanawatte/Reuters) 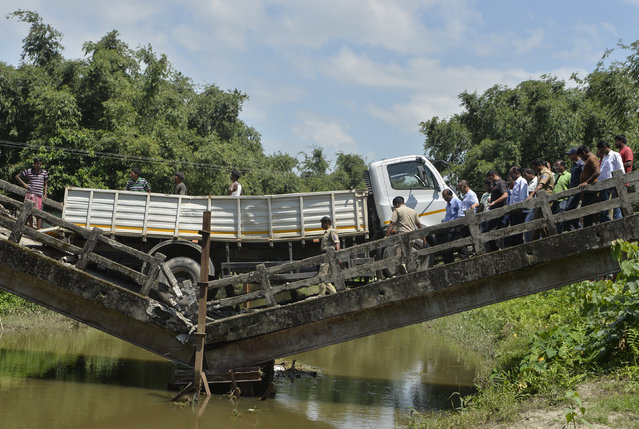 Indian rescue workers and villagers gather near a collapsed bridge in Phasidewa village near the India-Bangladesh border on the outskirts of Siliguri in the Indian state of West Bengal on September 7, 2018. No casualties were reported in the collapse. (Photo by Diptendu Dutta/AFP Photo) 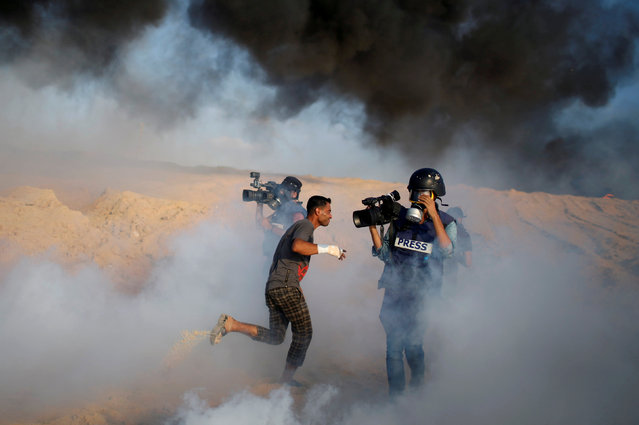 Cameramen film as a Palestinian demonstrator reacts to tear gas fired by Israeli troops during a protest calling for lifting the Israeli blockade on Gaza, on a beach near the maritime border with Israel, in the northern Gaza Strip September 10, 2018. (Photo by Mohammed Salem/Reuters) 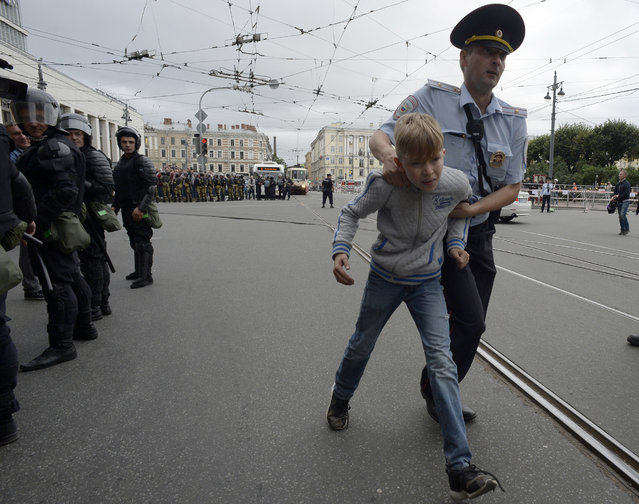 Russian police escorts a youth aware during a protest rally against planned increases to the nationwide pension age in Saint Petersburg on September 9, 2018.
Plans to hike the retirement age have led to a rare outburst of public anger and seen President Vladimir Putin's approval ratings take a hit, despite some efforts to water down the changes. But discontent is unlikely to translate into upsets at the ballot box, with serious opposition candidates in the highest-profile Moscow mayoral vote barred from standing. At least 2,000 people rallied in central Moscow, an AFP correspondent said, as the capital held a mayoral election the Kremlin-backed incumbent is sure to win. (Photo by Olga Maltseva/AFP Photo) 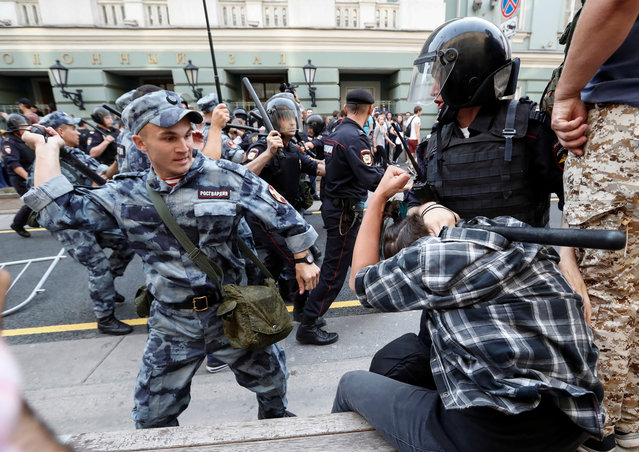 A serviceman of the Russian National Guard beats a protester during a rally against planned increases to the nationwide pension age in Moscow, Russia September 9, 2018. (Photo by Sergei Karpukhin/Reuters) 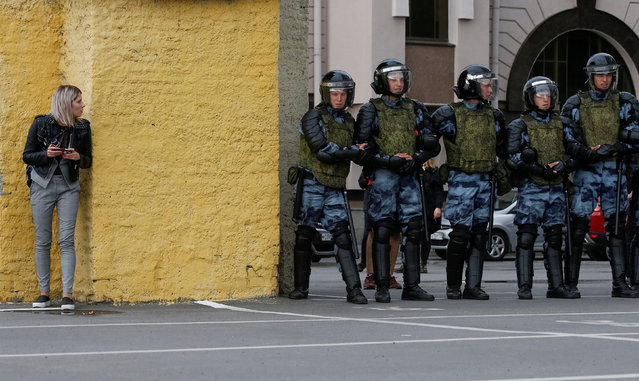 A woman looks at servicemen of the Russian National Guard blocking a street during a rally against planned increases to the nationwide pension age in St. Petersburg, Russia September 9, 2018. (Photo by Anton Vaganov/Reuters) 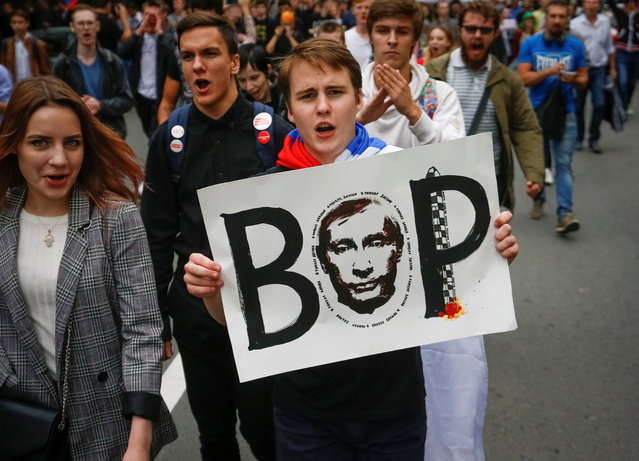 A protester carries a poster reading “Thief” and depicting Russian President Vladimir Putin during a rally against planned increases to the nationwide pension age in St. Petersburg, Russia September 9, 2018. The protests, organized by jailed opposition leader Alexei Navalny and his supporters, were a challenge to the authorities who were hoping for a high turnout at regional elections also being held on Sunday, despite anger over the pension move. (Photo by Anton Vaganov/Reuters) 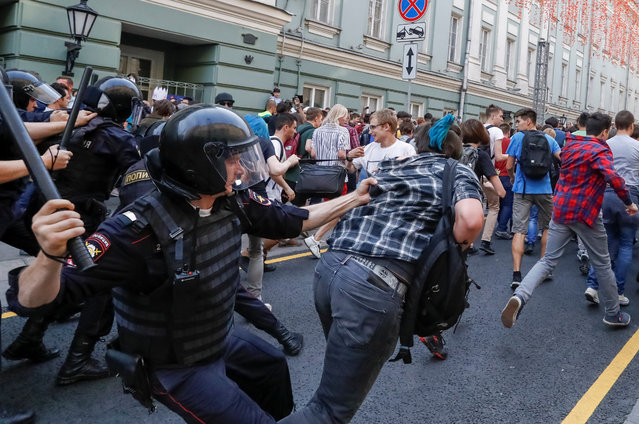 Police officers chase protesters during a rally against planned increases to the nationwide pension age in Moscow, Russia September 9, 2018. (Photo by Sergei Karpukhin/Reuters) 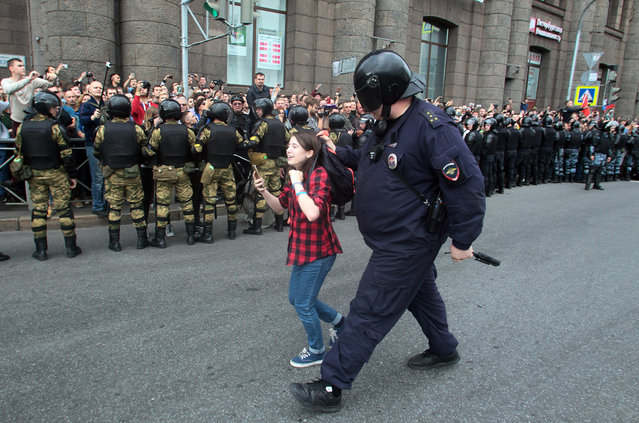 A Russian police officer detains a teenager during rally protesting retirement age hikes in St. Petersburg, Russia, Sunday, September 9, 2018. A government plan to increase the age for collecting state pensions brought protests across Russia's 11 time zones on Sunday even though the opposition leader who called them was in jail. Nearly 300 people were reported arrested. (Photo by Roman Pimenov/Interpress photo via AP Photo) 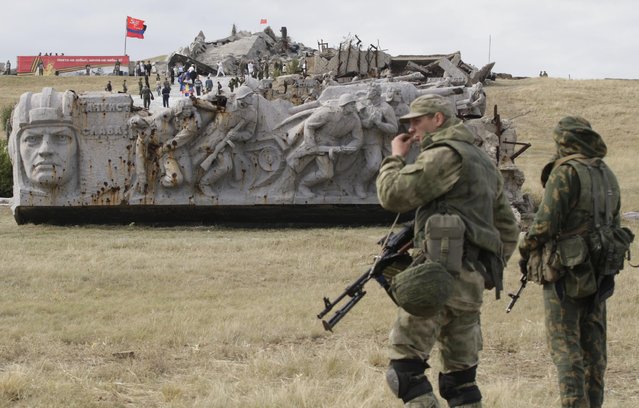 Servicemen of the self-proclaimed Donetsk People’s Republic (DNR) stand guard during a ceremony marking the 75th anniversary of the liberation of the Donbas region from the Nazi occupation during World War Two, near the war memorial complex Savur-Mohyla outside the rebel-held city of Donetsk, Ukraine September 7, 2018. (Photo by Alexander Ermochenko/Reuters) 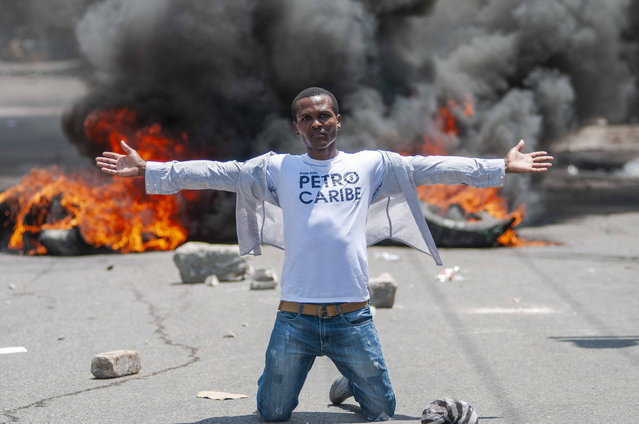 A person participates in a march to demand that the authorities apply sanctions against those who supposedly benefited from million-dollar Petrocaribe program, for which Venezuela supplies oil at low prices to the country, in Port-au-Prince, Haiti, 09 September 2018. Protesters burned tires and blocked John Brown Avenue in the capital, while police confronted them with tear gas. (Photo by Jean Marc Herve Abelard/EPA/EFE) 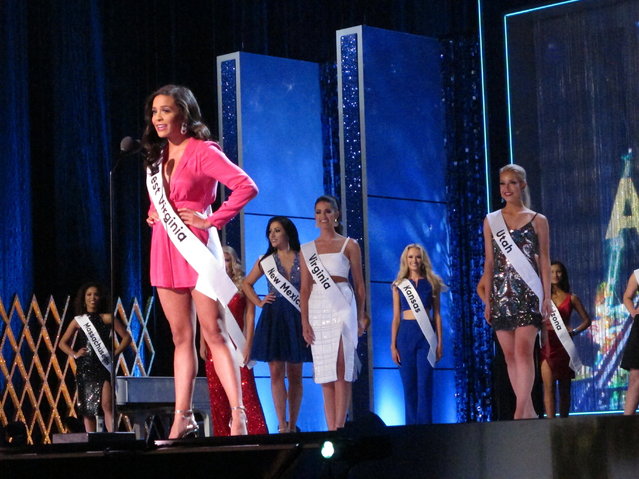 Miss West Virginia Madeline Collins introduces herself during the third and final night of preliminary competition in the Miss America pageant in Atlantic City N.J. on Friday September 7, 2018. Later in the night, during her onstage interview, Collins said President Trump “has created a lot of division in this country”. (Photo by Wayne Parry/AP Photo) 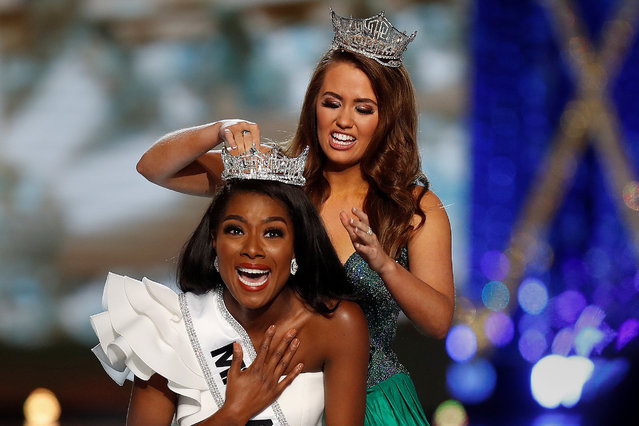 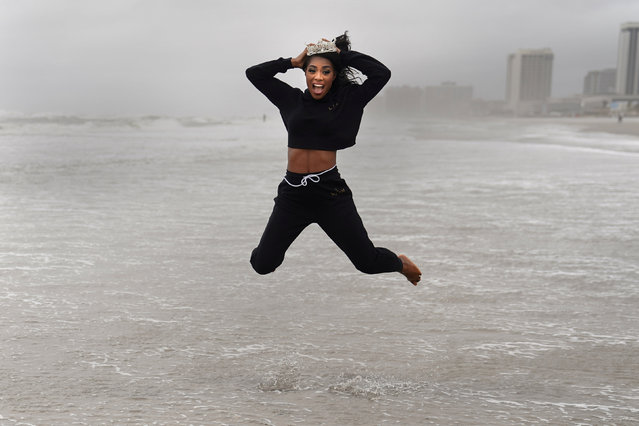 Miss America Nia Imani Franklin jumps as she poses for photos at the beach after she won Miss America, in Atlantic City, New Jersey, U.S., September 10, 2018. (Photo by Carlo Allegri/Reuters) 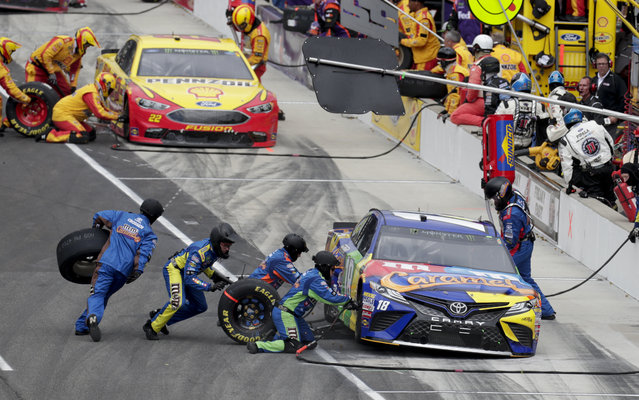 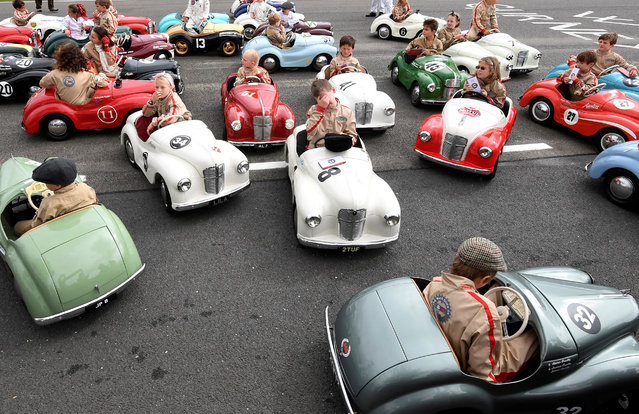 Children react after competing in a pedal car race as motoring enthusiasts attend the Goodwood Revival, a three day classic car racing festival celebrating the mid-20th century heyday of the sport, at Goodwood in southern Britain on September 9, 2018. (Photo by Toby Melville/Reuters) 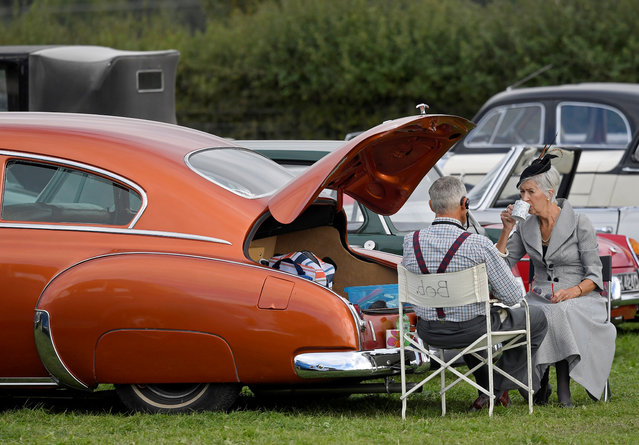 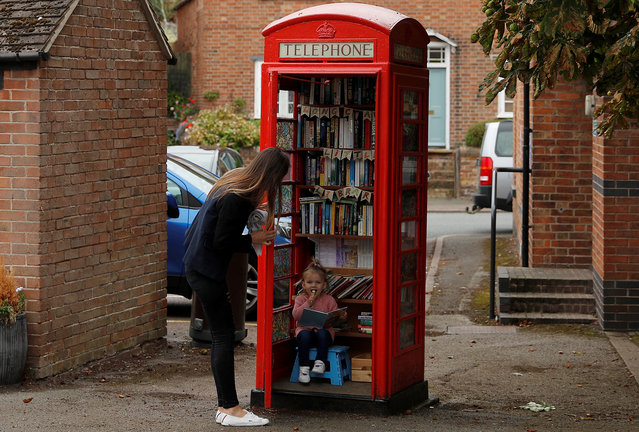 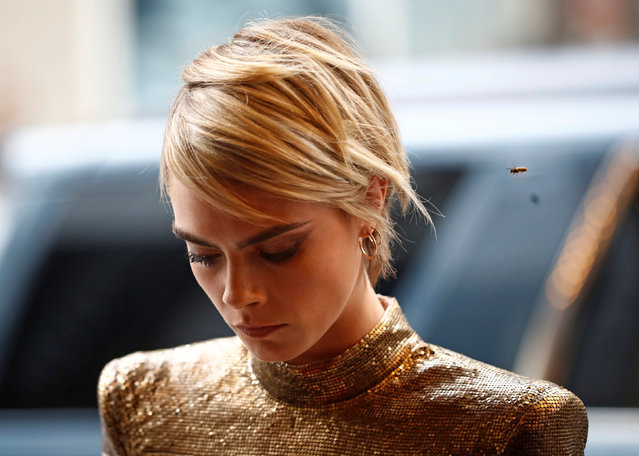 A bee flies near Cara Delevingne as she arrives at the world premiere of “Her Smell” at the Toronto International Film Festival (TIFF) in Toronto, Ontario, Canada September 9, 2018. (Photo by Mark Blinch/Reuters) 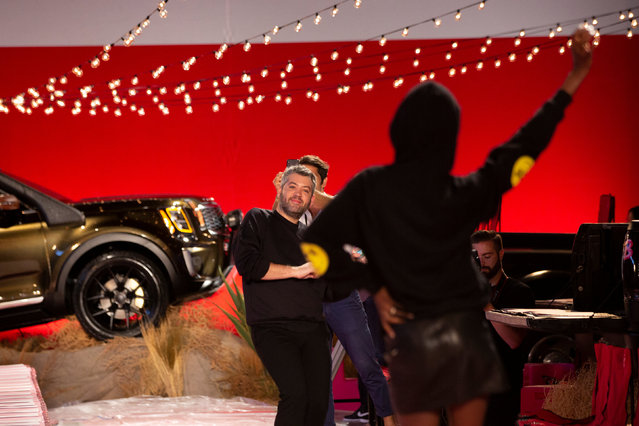 Designer Brandon Maxwell dances with a model during a run through before presenting the Brandon Maxwell Spring/Summer 2019 collection during New York Fashion Week in the Manhattan borough of New York City, U.S., September 8, 2018. (Photo by Caitlin Ochs/Reuters) 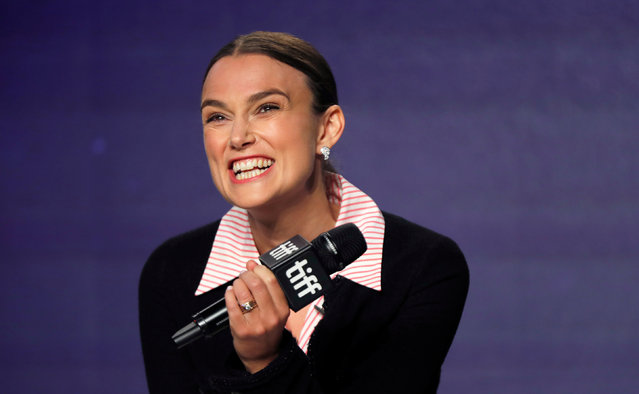