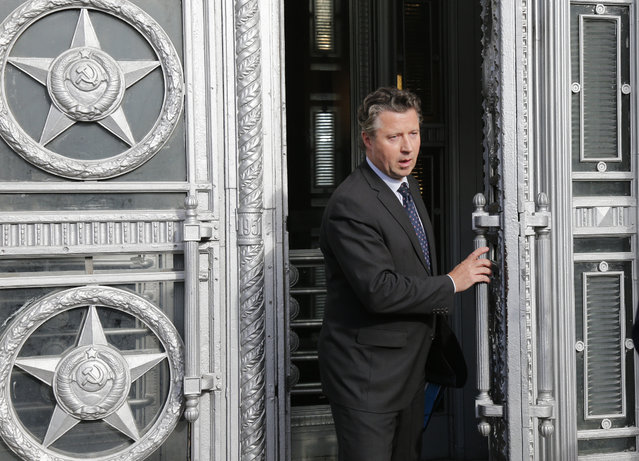 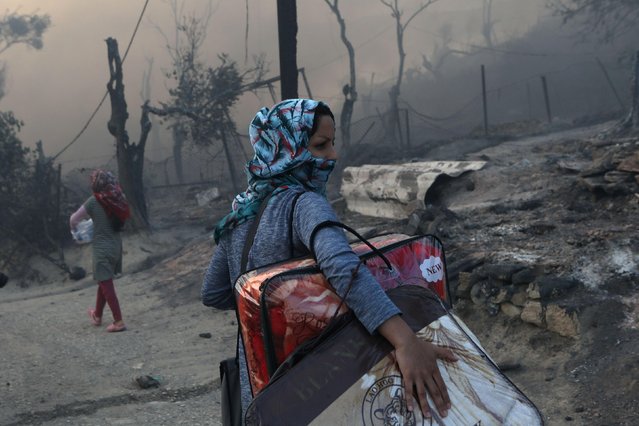 A migrant carries her belongings following a fire at the Moria camp for refugees and migrants on the island of Lesbos, Greece, September 9, 2020. Fire struck again Wednesday night in Greece's notoriously overcrowded refugee camp on the island of Lesbos, a day after a blaze swept through it and left thousands in need of emergency shelter. The fires caused no injuries, but they renewed criticism of Europe's migration policy. (Photo by Elias Marcou/Reuters) Migrants sit inside the burnt Moria Camp on the Greek island of Lesbos on September 9, 2020, after a major fire. Thousands of asylum seekers on the Greek island of Lesbos fled for their lives early September 9, as a huge fire ripped through the camp of Moria, the country's largest and most notorious migrant facility. Over 12,000 men, women and children ran in panic out of containers and tents and into adjoining olive groves and fields as the fire destroyed most of the overcrowded, squalid camp. The blaze started just hours after the migration ministry said that 35 people had tested positive at the camp. (Photo by Anthi Pazianou/AFP Photo) 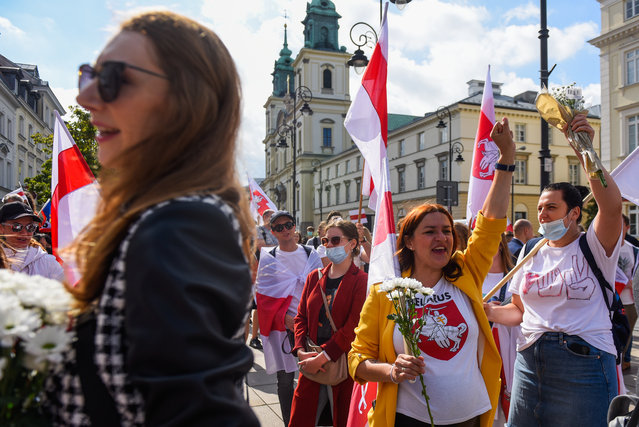 The Belarusian minority living in Poland wear face masks, hold banners and Belarus flags as they wait for the Exiled Belarus Opposition Leader Sviatlana Tsikhanouskaya at the old town on September 09, 2020 in Warsaw, Poland. Following the Belarus’ disputed presidential election results, which gave victory to ruling President Alexander Lukashenko, protests emerged in the country. Thousands have been arrested and the main Presidential candidate Svetlana Tikhanovskaya fled to Lithuania. (Photo by Omar Marques/Getty Images) 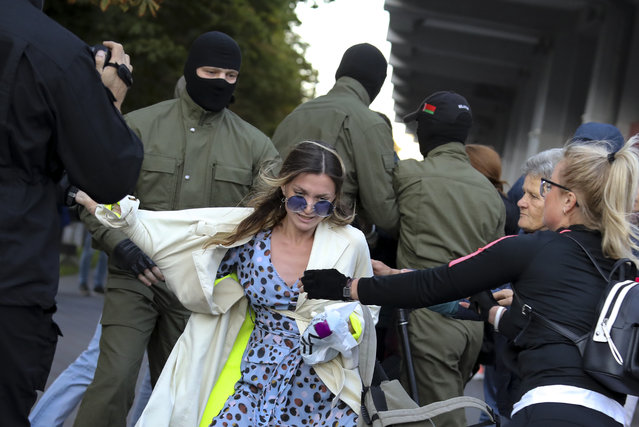 Protesters try to prevent police from detaining a demonstrator, center, during a rally in support of Maria Kolesnikova, and other members of the Coordination Council created by the opposition to facilitate talks with Lukashenko on a transition of power, was detained Monday in the capital of Minsk with two other council members, in Minsk, Belarus, Wednesday, September 9, 2020. The leading opposition candidate in Belarus' disputed presidential election said Wednesday that the political tension in her country should be solved internally, by the Belarusian people, but she did not exclude the need for future international mediation. (Photo by AP Photo/Stringer) 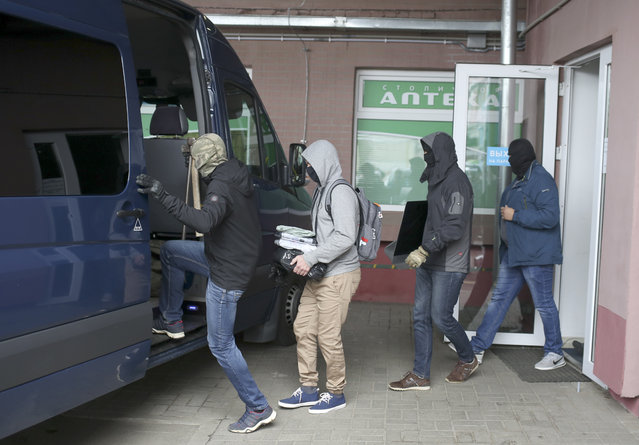 Authorities carry documents and computers out of the opposition Coordination Council office after a search raid in Minsk, Belarus, Wednesday September 9, 2020. Belarusian authorities on Wednesday detained one of the last leading members of an opposition council who remained free, moving methodically to end a month of protests against authoritarian President Alexander Lukashenko. (Photo by TUT.by/AP Photo) 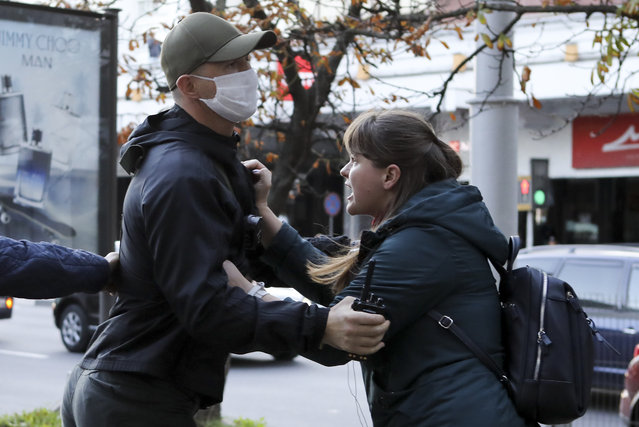 A policeman in civilian dress, left detains a woman during a rally in support of Maria Kolesnikova, and other members of the Coordination Council created by the opposition to facilitate talks with Lukashenko on a transition of power, was detained Monday in the capital of Minsk with two other council members, in Minsk, Belarus, Wednesday, September 9, 2020. (Photo by AP Photo/Stringer) 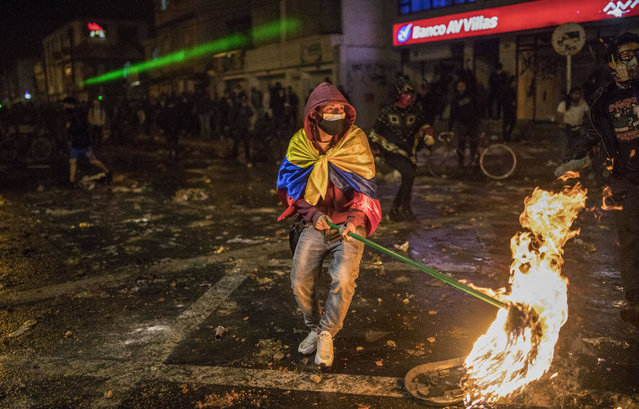 Demonstrators clash with police during protests sparked by the death of a man after he was detained by police in Bogota, Wednesday, September 9, 2020. Javier Humberto Ordonez, 46, died in hospital after receiving repeated electric shocks with a stun gun from officers who detained him for violating social distancing rules to curb the spread of the coronavirus. (Photo by Ivan Valencia/AP Photo) 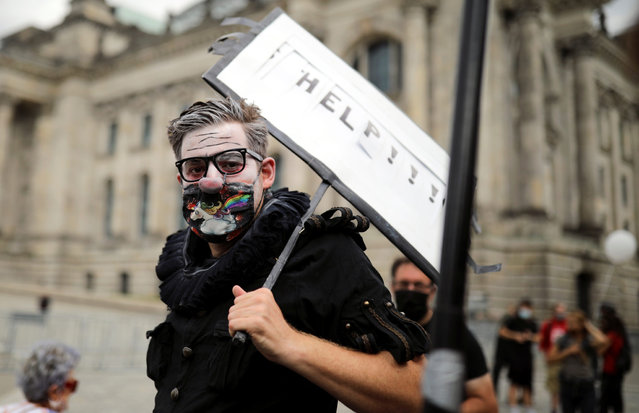 A man carries a sign as protesters demonstrate in support of the event sector affected by the coronavirus disease (COVID-19), in Berlin, Germany, September 9, 2020. (Photo by Hannibal Hanschke/Reuters) 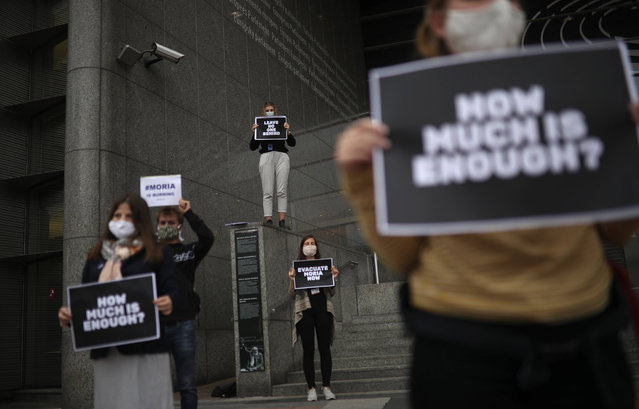 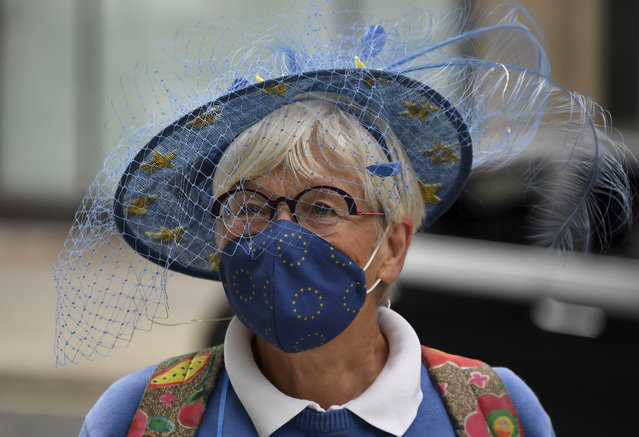 A pro EU protester is seen at the Westminster Conference Centre in London, Wednesday, September 9, 2020. UK and EU officials begin the eighth round of Brexit negotiations in London. (Photo by Alberto Pezzali/AP Photo) 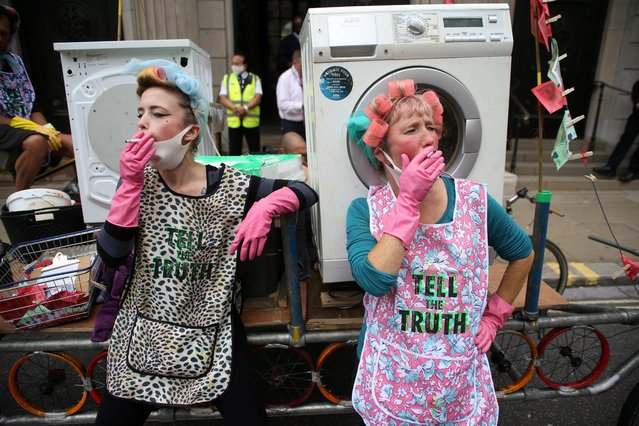 Extinction Rebellion climate activists stage a protest during a “peaceful disruption” of UK parliament as lawmakers return from the summer recess, London, Britain on September 9, 2020. (Photo by Tom Jacobs/Reuters) 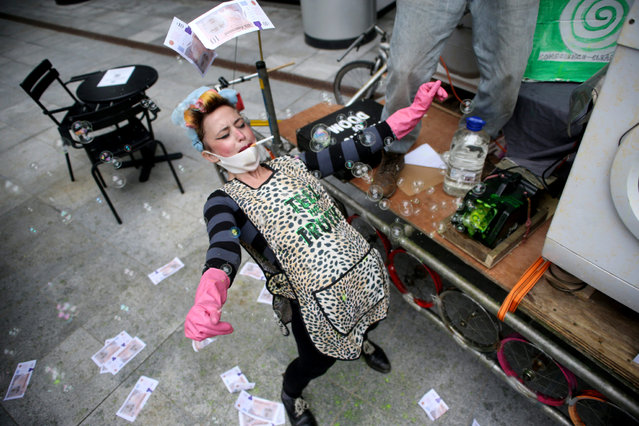 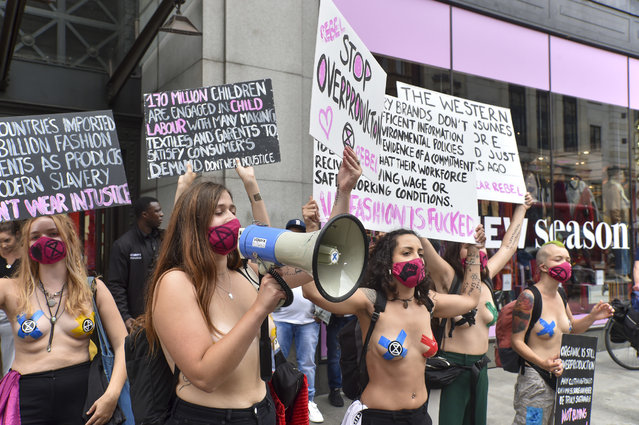 Naked activists holding placards during the Redress the Injustice Protest in London on September 9, 2020. Extinction Rebellion Fashion Action (XRFA) demonstrate outside the Topshop and Topman store on Oxford Street, opposing the fashion industry's many human, animal and environmental injustices claiming that, it currently produces around 10% of global carbon emissions. Its emissions are predicted to increase by around 50% by 2030. (Photo by Dave Rushen/SOPA Images/Sipa USA) 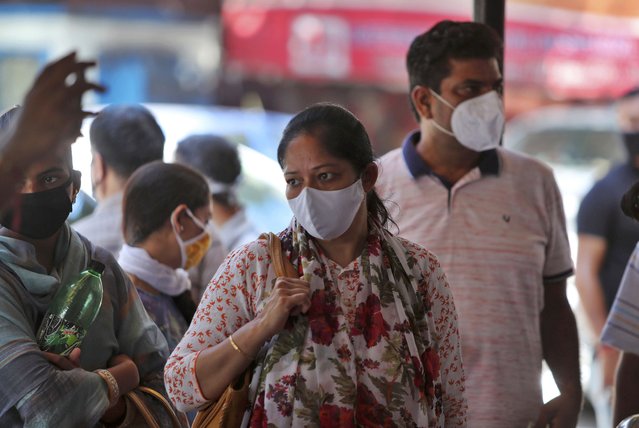 Indians wearing face masks wait for medical check-up outside a government hospital in Jammu, India, Wednesday, September 9, 2020. India's coronavirus cases are now the second-highest in the world and only behind the United States. (Photo by Channi Anand/AP Photo) 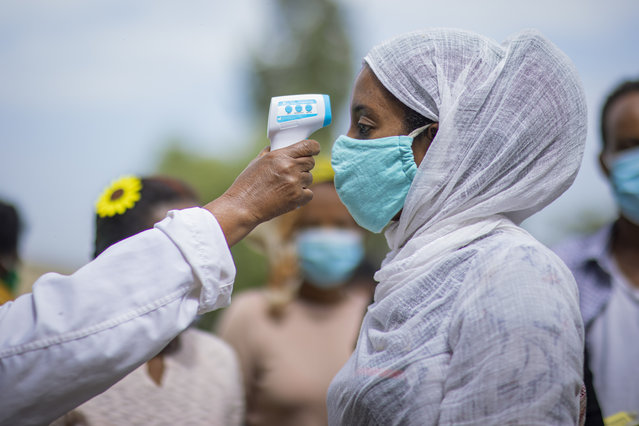 A woman has her temperature taken, to curb the spread of the coronavirus, before casting her vote in a local election in the regional capital Mekelle, in the Tigray region of Ethiopia Wednesday, September 9, 2020. People began voting in Ethiopia's northern Tigray region on Wednesday in a local election defying the federal government and increasing political tensions in Africa's second most populous country. (Photo by AP Photo/Stringer) 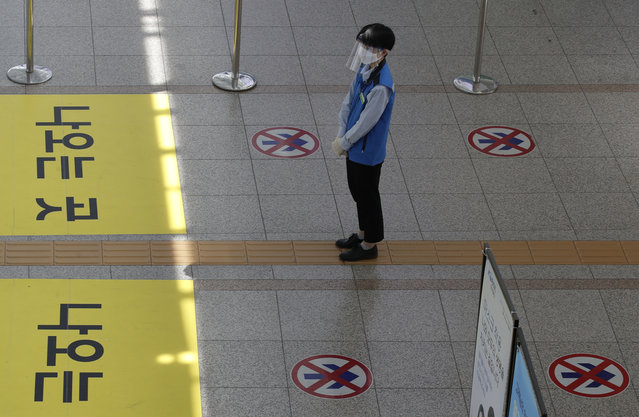 An employee wearing a face mask and face shield stands to guide passengers to maintain a one-way walk flow as a precaution against the coronavirus at the Seoul Railway Station in Seoul, South Korea, Thursday, September 10, 2020. (Photo by Lee Jin-man/AP Photo) 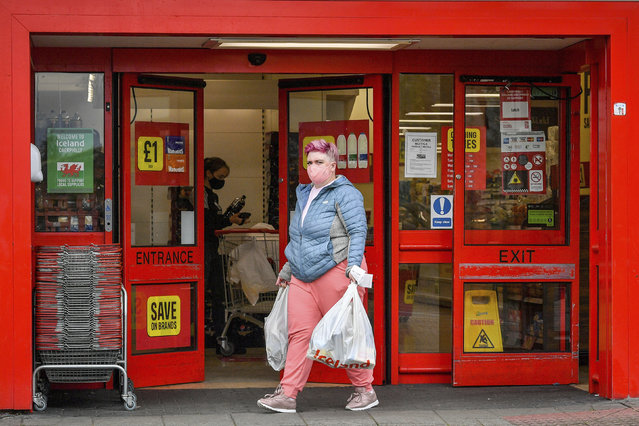 A woman wearing a mask to protect against coronavirus, leaves a store, a day after the county borough of Caerphilly began a local lockdown following a “significant rise” in coronavirus cases, in Caerphilly, South Wales, Wednesday, September 9, 2020. (Photo by Ben Birchall/PA Wire via AP Photo) 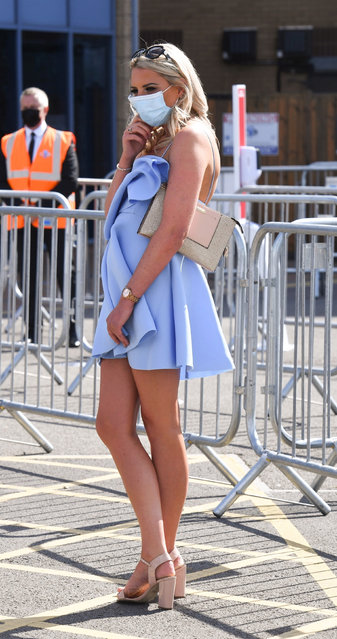 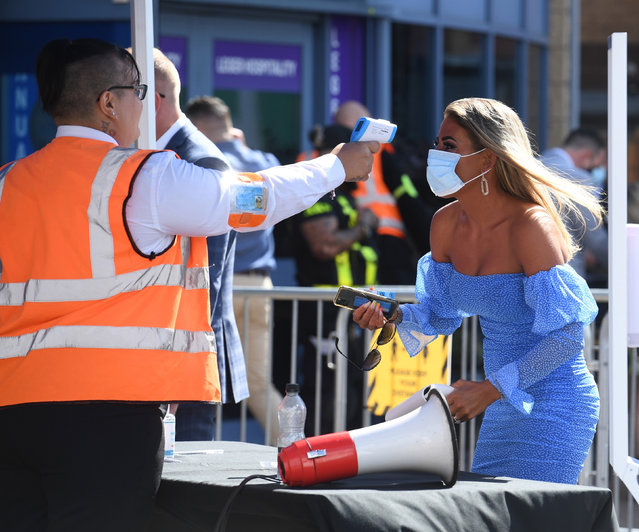 Racegoers have their temperatures checked as they make their way into the course as a pilot scheme for the return of crowds to sporting events is expected to bring in 2500 spectators during day one of the William Hill St Leger Festival at Doncaster Racecourse, England on September 9, 2020. (Photo by BackGrid/The Sun) 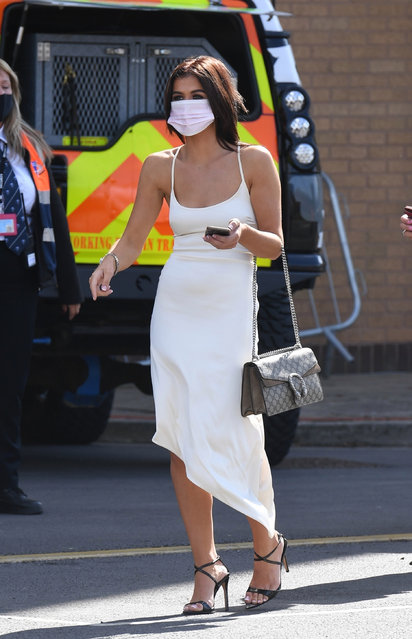