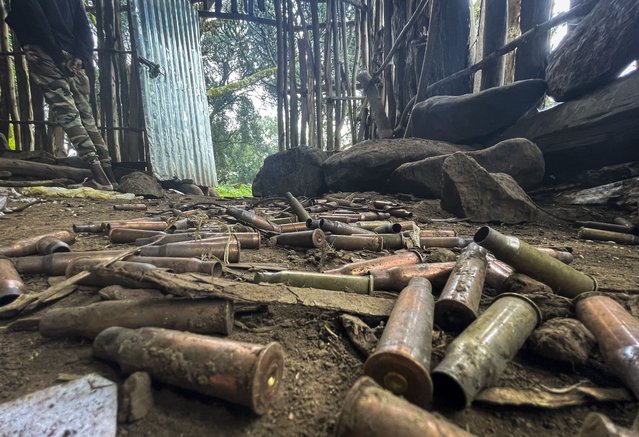 Spent bullet casings lie scattered on the ground in a hut near the village of Chenna Teklehaymanot, in the Amhara region of northern Ethiopia Thursday, September 9, 2021. At the scene of one of the deadliest battles of Ethiopia's 10-month Tigray conflict, witness accounts reflected the blurring line between combatant and civilian after the federal government urged all capable citizens to stop Tigray forces “once and for all”. (Photo by AP Photo/Stringer) 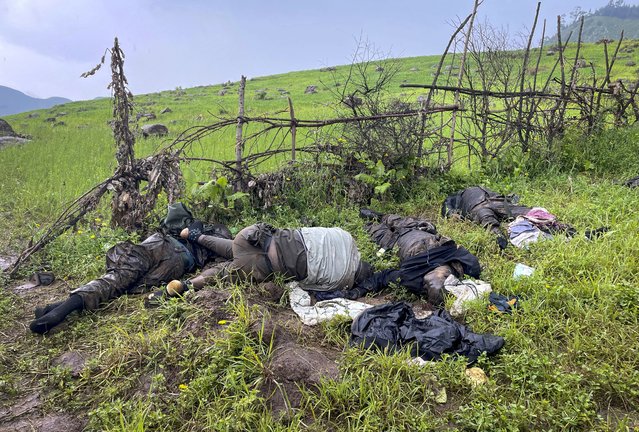 The dead bodies of unidentified people wearing military uniforms lie on the ground near the village of Chenna Teklehaymanot, in the Amhara region of northern Ethiopia Thursday, September 9, 2021. (Photo by AP Photo/Stringer) 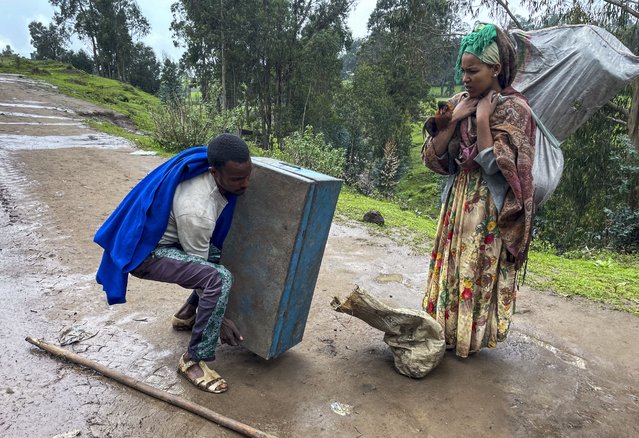 Senait Ambaw, right, who said her home had been destroyed by artillery, leaves by foot on a path near the village of Chenna Teklehaymanot, in the Amhara region of northern Ethiopia Thursday, September 9, 2021. (Photo by AP Photo/Stringer) 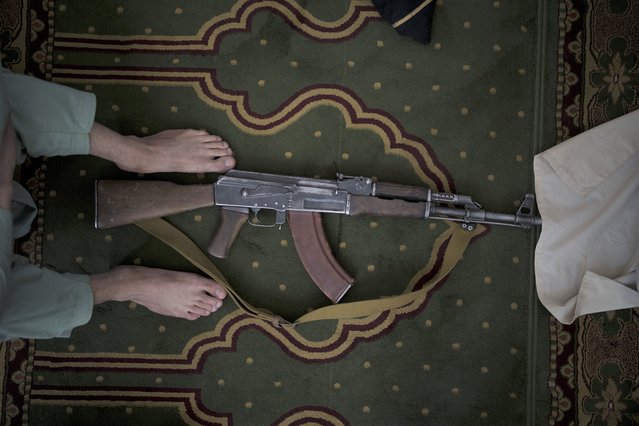 A Taliban fighter lays his AK-47 rifle down during Friday prayers at a Mosque in Kabul, Afghanistan, Friday, September 10, 2021. (Photo by Felipe Dana/AP Photo) 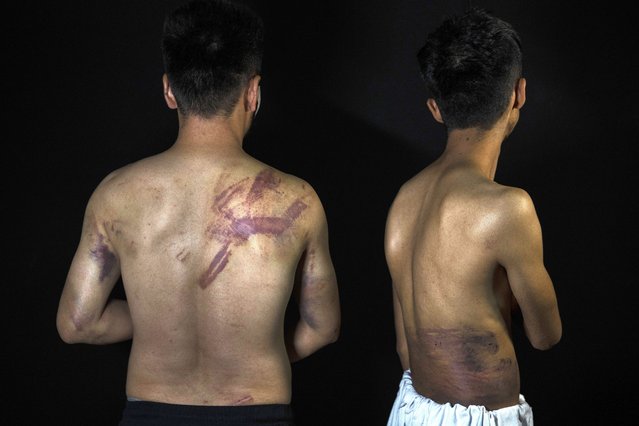 Afghan journalists Neamatullah Naqdi, 28, and Taqi Daryabi, 22, pose for a portrait at Etilaat Roz daily office in Kabul, Afghanistan, Friday, September 10, 2021. The Afghan reporters were detained and beaten by Taliban forces after covering a women's protest in Kabul. The U.N. human rights office said incidents of Taliban violence against protesters and journalists is increasing. (Photo by Bernat Armangue/AP Photo) 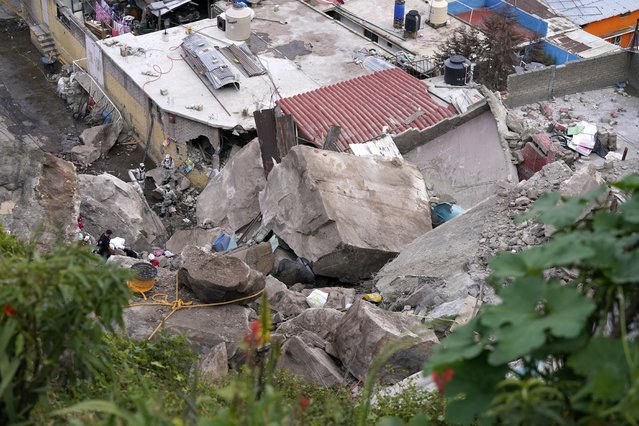 Boulders that plunged from a mountainside rests among homes in Tlalnepantla, on the outskirts of Mexico City, when a mountain gave way on Friday, September 10, 2021. A section of mountain on the outskirts of Mexico City gave way Friday, plunging rocks the size of small homes onto a densely populated neighborhood and leaving at least one person dead and 10 others missing. (Photo by Eduardo Verdugo/AP Photo) 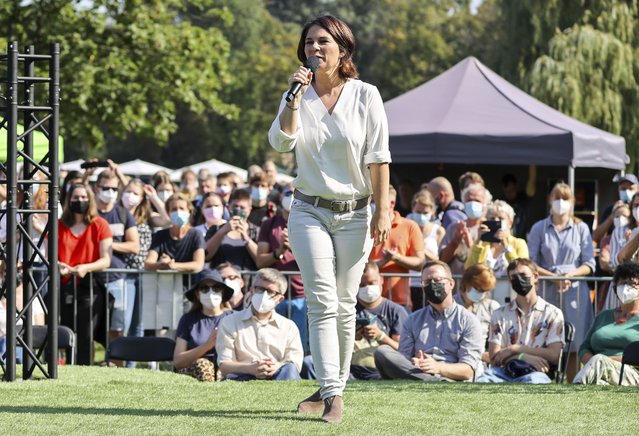 The candidate for chancellor of the German Green party, Annalena Baerbock, speaks during an election campaign event in Halle near Leipzig, Germany, Wednesday, September 8, 2021. Climate change is among the top concerns for Germans going into this year's national election that will determine who replaces Angela Merkel as Chancellor. But while voters admit they are worried about the state of the planet, especially after last the deadly floods that hit Germany in July, many fear the cost of backing the environmentalist Green party that's campaigned strongest for meeting the Paris climate accord's goals. (Photo by Jan Woitas/dpa via AP Photo) 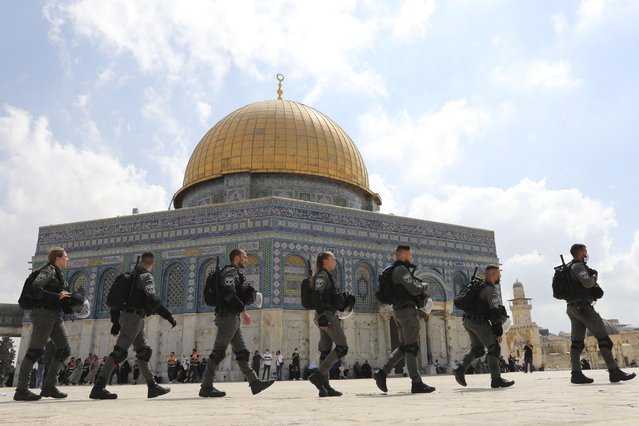 Israeli police maneuver through the Al Aqsa Mosque compound after Friday prayers to clear a protest a protest celebrating the six Palestinian prisoners who tunneled out of Gilboa Prison, in the Old City of Jerusalem, Friday, September 10, 2021. (Photo by Mahmoud Illean/AP Photo) 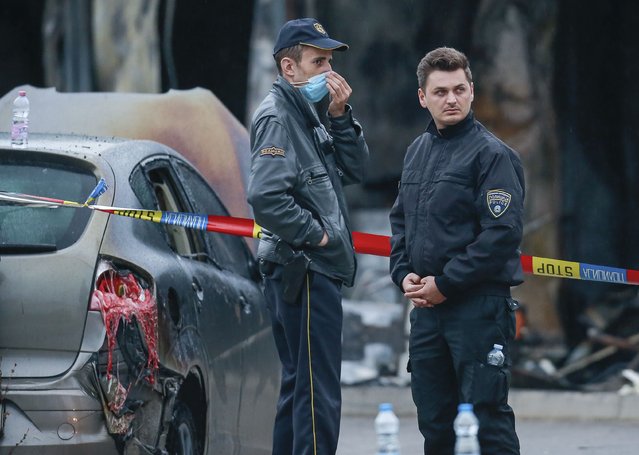 Police officers gather at the site of a destroyed field hospital following a fire in North Macedonia's northwestern city of Tetovo, early Thursday, September 9, 2021. The government of North Macedonia will hold an emergency meeting Thursday over a fire overnight that ripped through a field hospital set up to treat COVID-19 patients, leaving numerous people dead. (Photo by Visar Kryeziu/AP Photo) 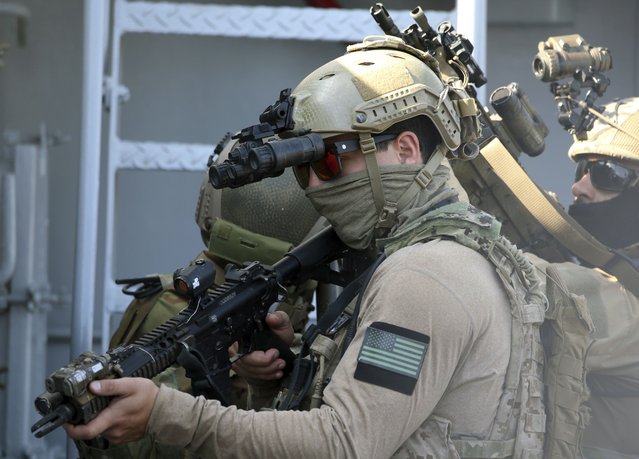 A U.S. Navy SEAL special forces operator, front, and colleagues during a joint U.S.-Cyprus military drill at Limassol port on Friday, September 10, 2021. Cyprus' Defense Minister Charalambos Petrides said the U.S. and Cyprus are on the same strategic path to ensure security and stability in a turbulent region and that continued close cooperation between the special forces of both countries aim to counter threats from potential terrorist acts. (Photo by Philippos Christou/AP Photo) 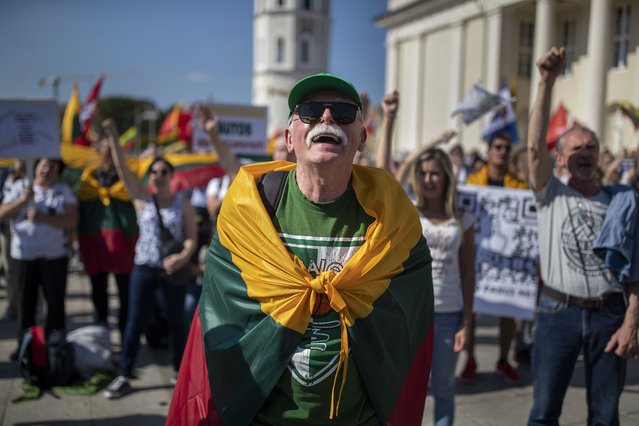 Anti-vaccination protesters take part in a protest at Cathedral Square in Vilnius, Lithuania, Friday, September 10, 2021, against the government's restrictions for people who have not developed immunity to COVID-19. (Photo by Mindaugas Kulbis/AP Photo) 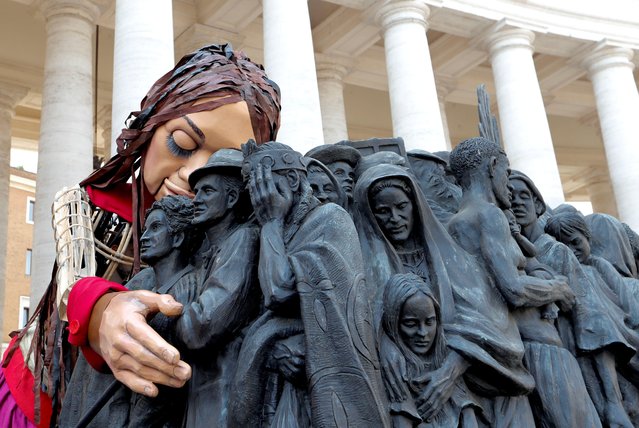 Little Amal, a 3.5 metre tall puppet of a young Syrian refugee girl, embraces the Angels Unawares scuplure in St. Peter's Square as she travels across Europe from Turkey to Britain as part of an 8,000 kilometre walk to raise awareness for the plight of young refugees, Vatican, September 10, 2021. (Photo by Remo Casilli/Reuters) 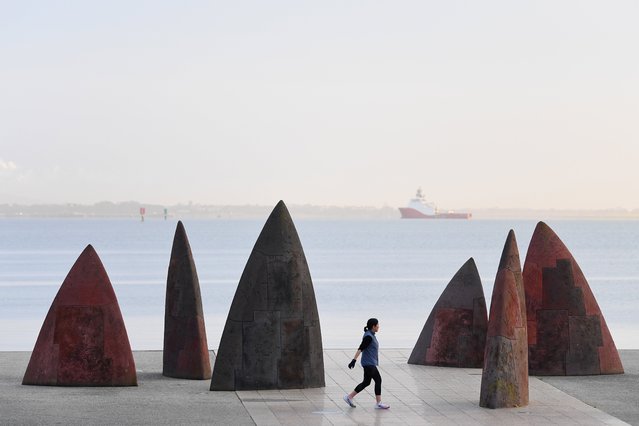 A person is seen exercising in Geelong, Victoria, Australia, 10 September 2021. Coronavirus restrictions are set to lift in regi​onal Victoria from 12:01am on 10 September. (Photo by James Ross/EPA/EFE) 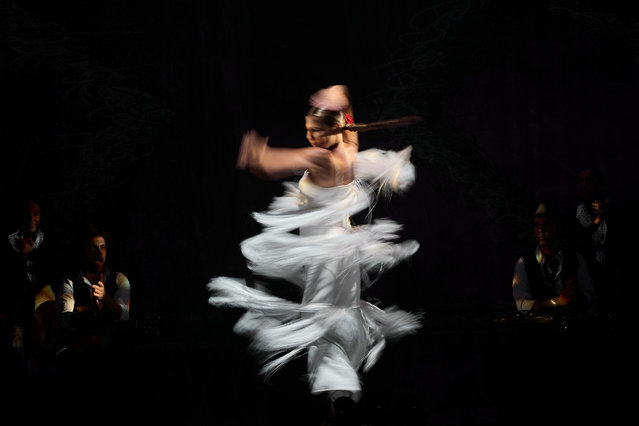 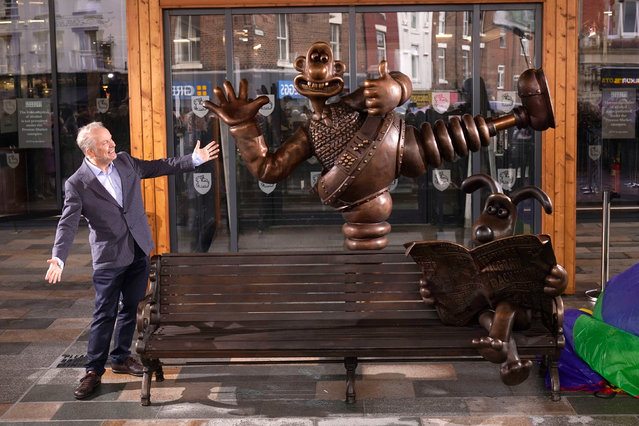 Nick Park, creator of Wallace and Gromit, Aardman Animations, at the unveiling of a bronze Wallace and Gromit bench sculpture, in Preston, Lancashire on Friday, September 10, 2021, based on the cheese-loving inventor and his loyal companion as they appeared in The Wrong Trousers. (Photo by Danny Lawson/PA Images via Getty Images) 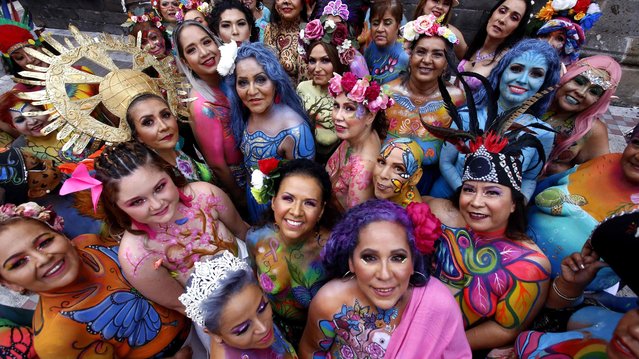 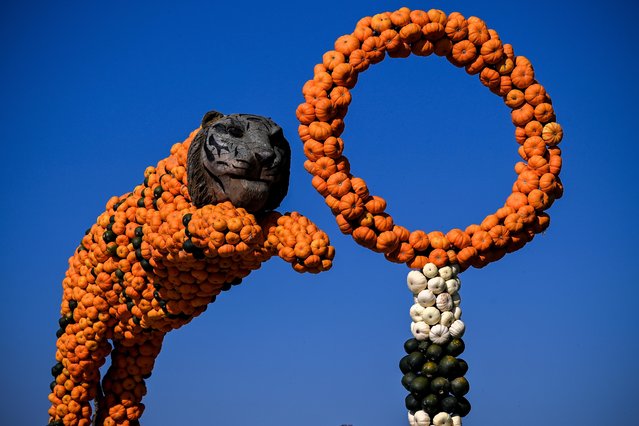 A pumpkin sculpture forms a jumping tiger on a field in Mechernich, Germany, 09 September 2021. With what is said to be the German federal state of North Rhine-Westphalia's largest pumpkin show, the local Krewelshof Eifel officially started this year's pumpkin season under the motto “Clear the ring for the pumpkin circus”. More than 100,000 pumpkins were staged as circus characters until the end of October 2021. (Photo by Sascha Steinbach/EPA/EFE) 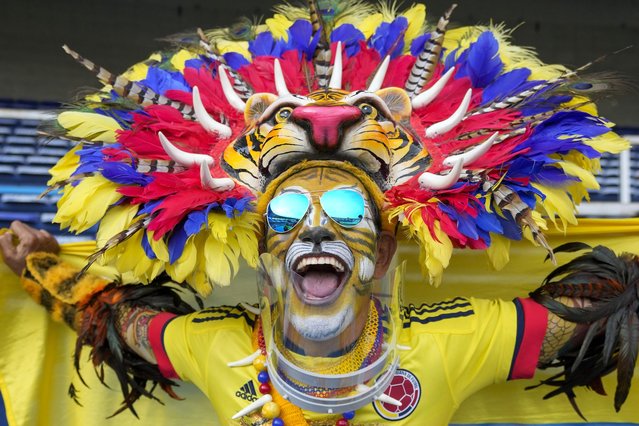 A fan of Colombia cheers prior to a qualifying soccer match between for the FIFA World Cup Qatar 2022 Colombia and Chile in Barranquilla, Colombia, Friday, September 10, 2021. (Photo by Fernando Vergara/AP Photo) 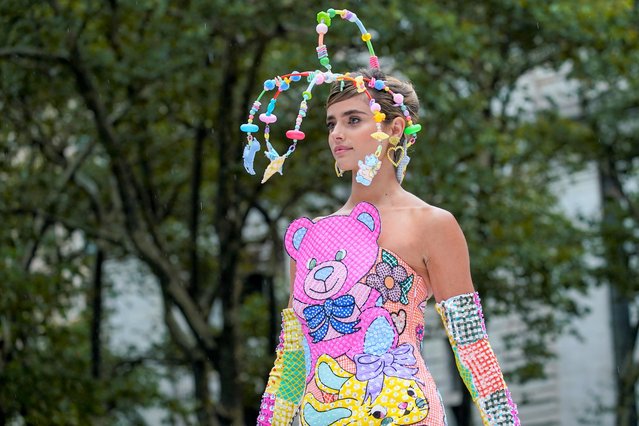