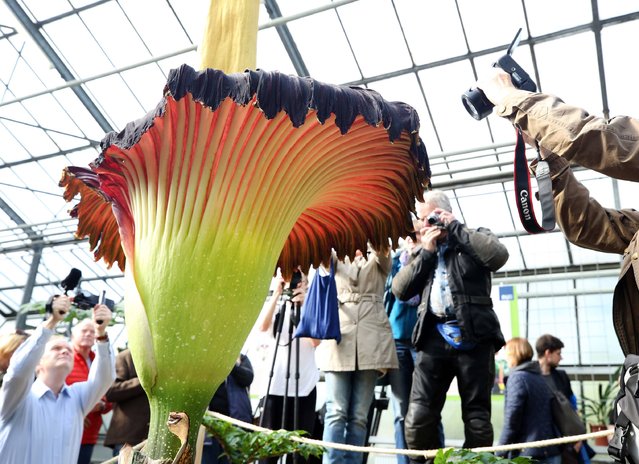 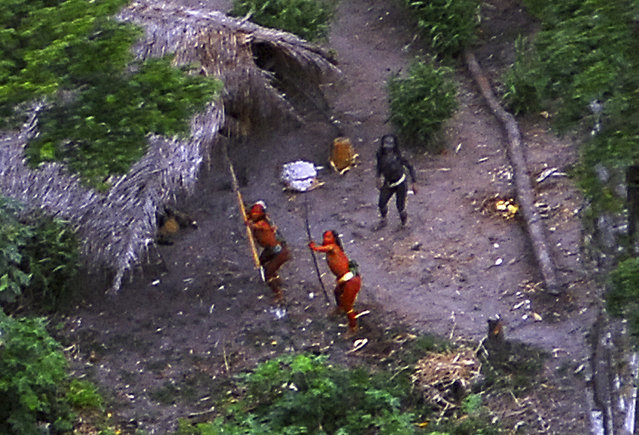 Members of an unknown Amazon Basin tribe and their dwellings are seen during a flight over the Brazilian state of Acre along the border with Peru in this May, 2008 photo distributed by FUNAI, the government agency for the protection of indigenous peoples. Survival International estimates that there are over 100 uncontacted tribes worldwide, and says that uncontacted tribes in the region are under increasing threat from illegal logging over the border in Peru. (Photo by Reuters/Funai-Frente de Proteção Etno-Ambiental Envira) 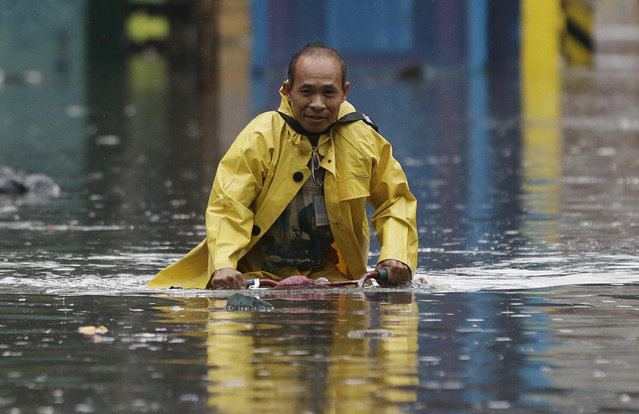 A man pedals his bicycle along a flooded street in Manila, Philippines on Tuesday, September 12, 2017. Classes in schools and work in government offices have been suspended in the capital and nearby provinces as heavy rains pour causing floods in low-lying areas due to Tropical Depresion “Maring”. (Photo by Aaron Favila/AP Photo) 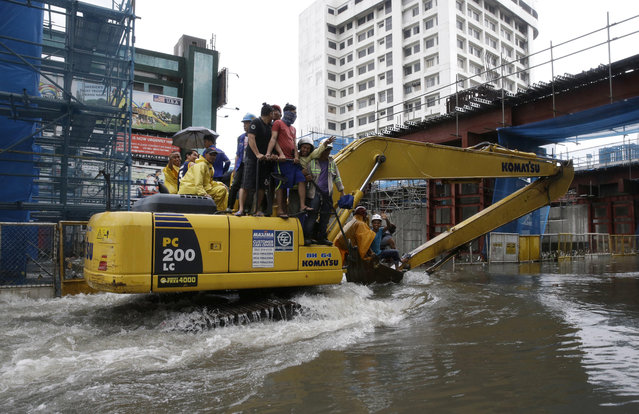 Filipino workers ride on a backhoe as they cross a flooded street in Manila, Philippines on Tuesday, September 12, 2017. (Photo by Aaron Favila/AP Photo) 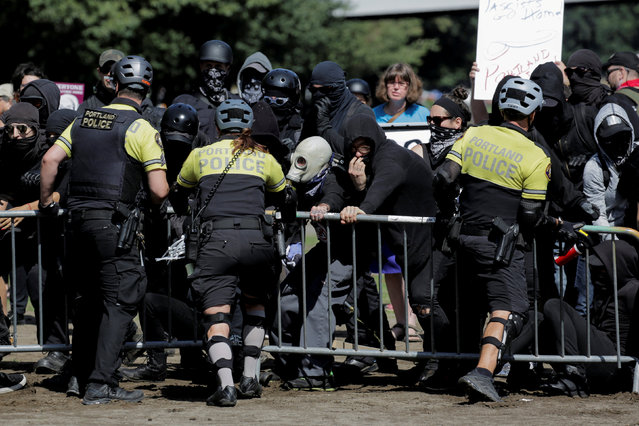 Police officers hold up a barricade against a crowd of black-clad demonstrators counter protesting against right-wing group Patriot Prayer in Portland, Oregon, U.S. September 10, 2017. Patriot Prayer announced they were moving their Sunday rally from downtown Portland to nearby Vancouver, Washington, citing fears for their safety. (Photo by Elijah Nouvelage/Reuters) 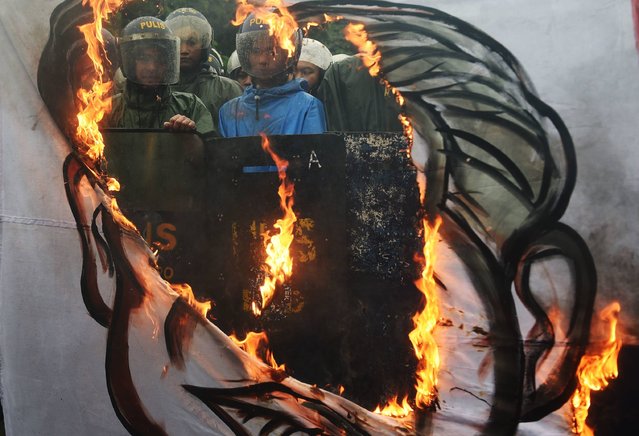 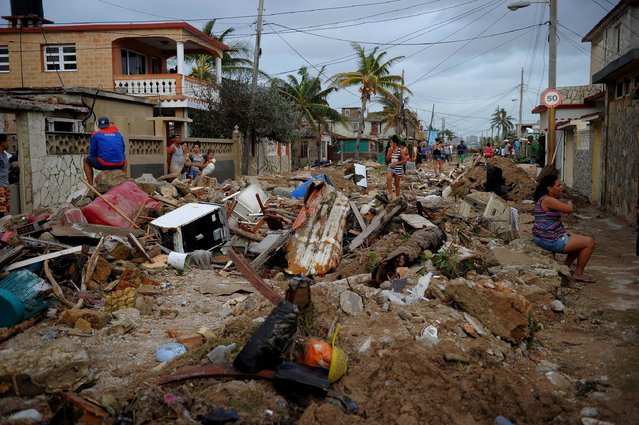 View of damages after the passage of Hurricane Irma, in Cojimar neighborhood in Havana, on September 10, 2017. Residents of Cuba's historic capital Havana were waist-deep in floodwaters after Hurricane Irma, on its way to Florida, swept by, cutting off power and forcing the evacuation of more than a million people. (Photo by Yamil Lage/AFP Photo) 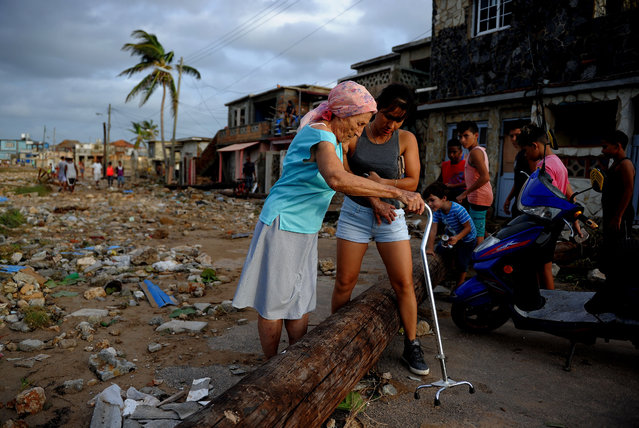 Residents of the Cojimar neighbourhood after Hurricane Irma devastated the capital on September 10, 2017. (Photo by Yamil Lage/AFP Photo) 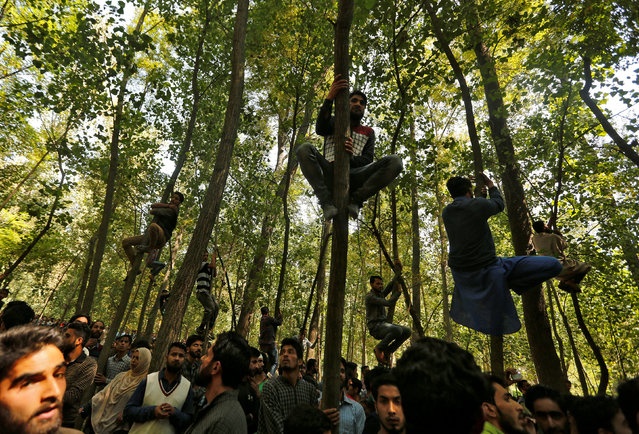 People climb trees to watch the body of Dawood Illahi Khan, a suspected militant, who according to local media was killed in an encounter with the Indian security forces, being taken away for burial in Hawoorah village in south Kashmir’s Kulgam district, September 11, 2017. (Photo by Danish Ismail/Reuters) 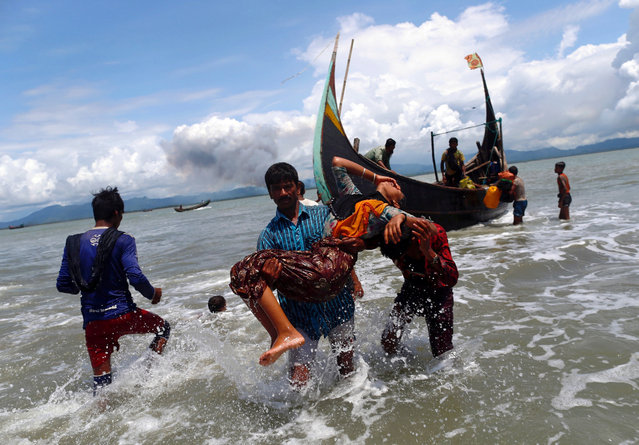 Smoke is seen on Myanmar's side of border as an exhausted Rohingya refugee woman is carried to the shore after crossing the Bangladesh-Myanmar border by boat through the Bay of Bengal, in Shah Porir Dwip, Bangladesh September 11, 2017. (Photo by Danish Siddiqui/Reuters) 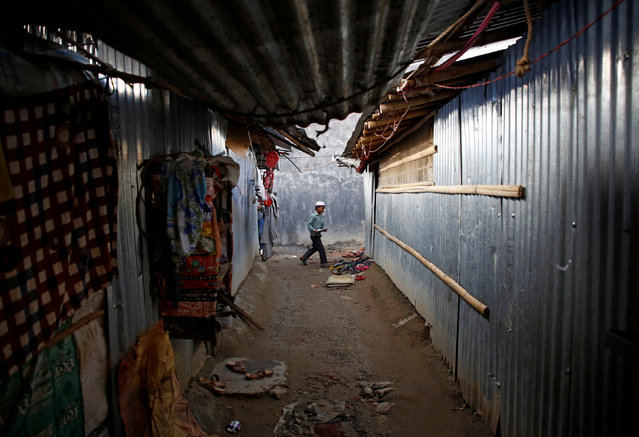 A Rohingya refugee boy enters a classroom made of corrugated metal in Kathmandu, Nepal September 11, 2017. There are about 300 Rohingya refugees living in Nepal since 2012 in two tin roofed camps on the outskirts of Kathmandu. Many of them say they want to go back to their homes if there was security, peace and a guarantee for equal treatment. (Photo by Navesh Chitrakar/Reuters) 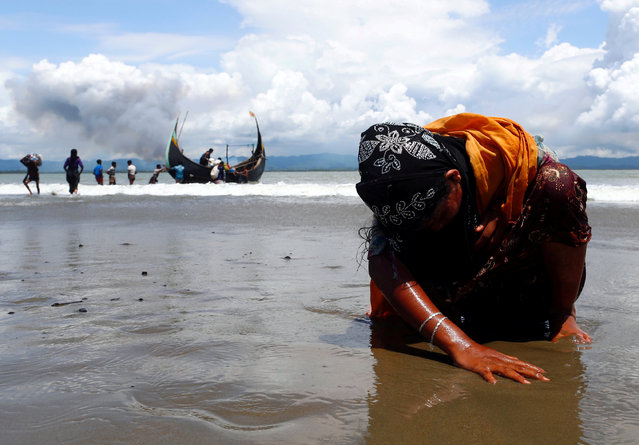 An exhausted Rohingya refugee woman touches the shore after crossing the Bangladesh-Myanmar border by boat through the Bay of Bengal, in Shah Porir Dwip, Bangladesh September 11, 2017. (Photo by Danish Siddiqui/Reuters) 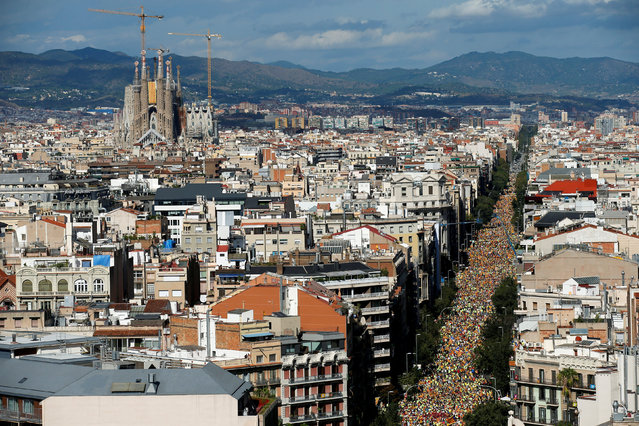 Thousands of people gather for a rally on the regional national day 'La Diada' (National Day of Catalonia) in Barcelona, Spain, September 11, 2017. (Photo by Albert Gea/Reuters) Men wearing reproductions of Catalan military costumes of the 18th century shoot blaze weapons during a performance during the Catalan National Day in Barcelona, Spain, on Monday, September 11, 2017. Hundred of thousands of people are expected to demonstrate in Barcelona to call for the creation of a new Mediterranean nation, as they celebrate the Catalan National Day holiday. (Photo by Santi Palacios/AP Photo) 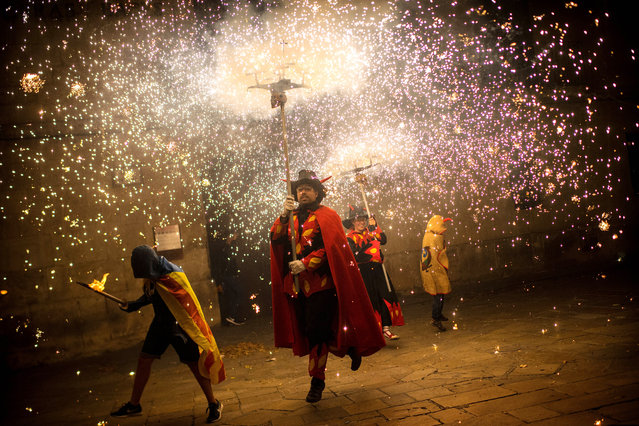 “Correfocs” perform during a Catalan pro-independence demonstration on September 10, 2017 in Vilafranca del Penedes, Spain. The Spanish Northeastern autonomous region celebrates its National Day on September 11 marked by the secession referendum of the next October 1 which was approved by the Catalan Parliament and banned by the Spanish Government. (Photo by David Ramos/Getty Images) 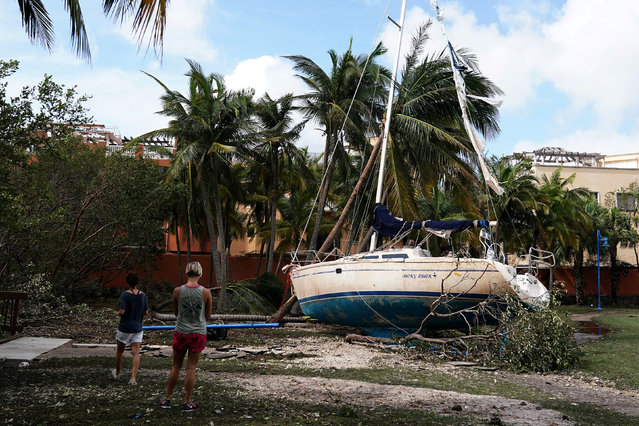 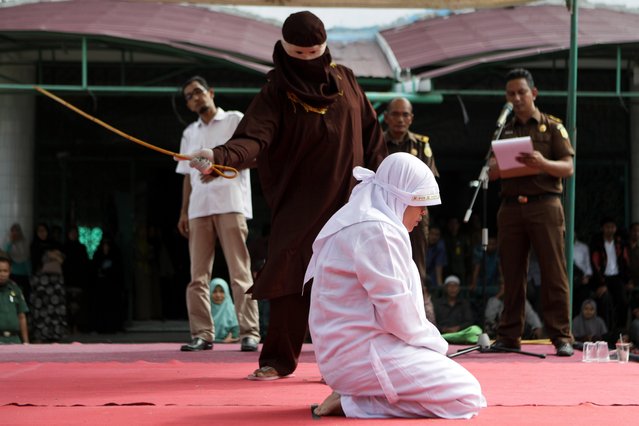 An Acehnese woman is whipped as punishment in front of the public in Banda Aceh, Indonesia, 11 September 2017. Reports state 11 Acehnese were sentenced 10 to 29 strokes of the whip for adultery and gambling in Aceh. Whipping punishment is one of the punishments for those who break the Sharia law in Aceh as it's the only one province in Indonesia which implemented the Sharia law as a positive law. (Photo by Hotli Simanjuntak/EPA/EFE) 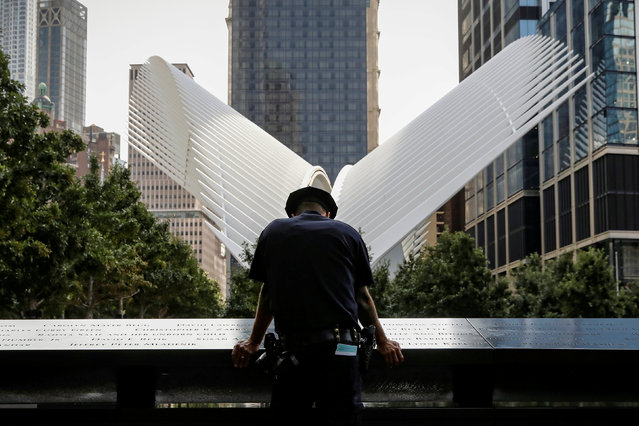 A New York City Police Department (NYPD) officer pauses at the edge of the reflecting pool at the National 9/11 Memorial and Museum during ceremonies marking the 16th anniversary of the attacks in New York, U.S., September 11, 2017. (Photo by Brendan McDermid/Reuters) 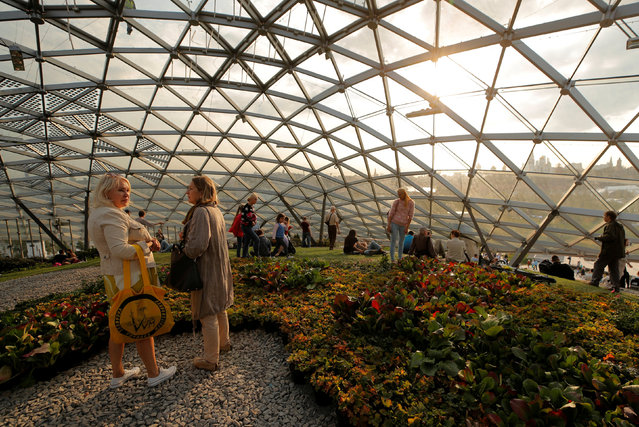 People rest at a glass dome with a greenhouse (or “Glass bark”) at the newly opened Zaryadye Park off Red Square in central Moscow, Russia September 11, 2017. (Photo by Maxim Shemetov/Reuters) 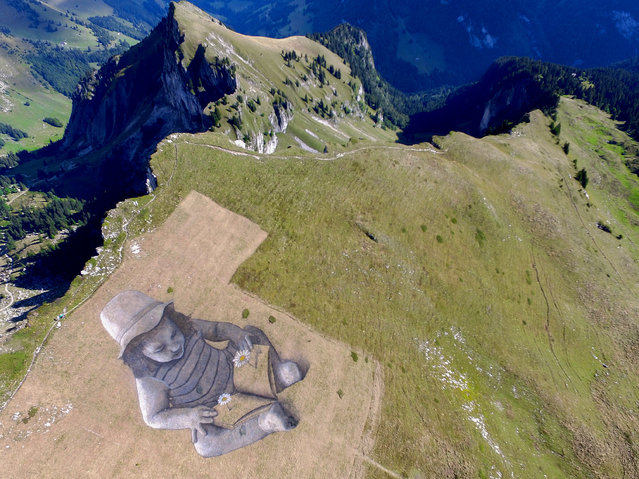 This handout picture received from French artist Guillaume Legros is an image captured using a drone shows a general view of a land art painting by Legros (also known as Sapye) measuring some 6,000 square metres and entitled “A story of the future” painted on a hillside in Rochers de Naye above Montreux. The giant painting was created using more that 600 litres of flour, water, milk protein and biodegradable natural pigments, and was complete to mark the occasion of 125th anniversary of the train line between Glion-Rochers de Naye. (Photo by Guillaume Legros, also known as Saype/AFP Photo) 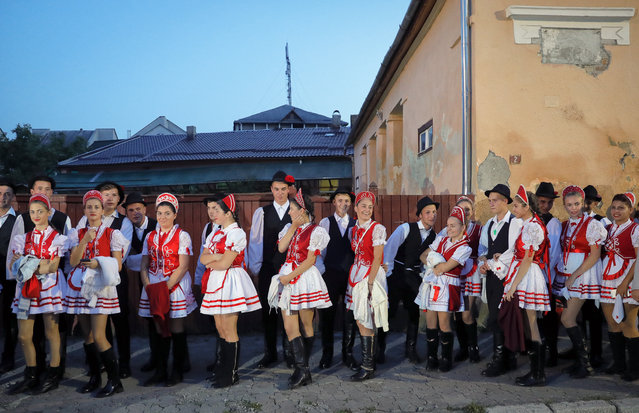 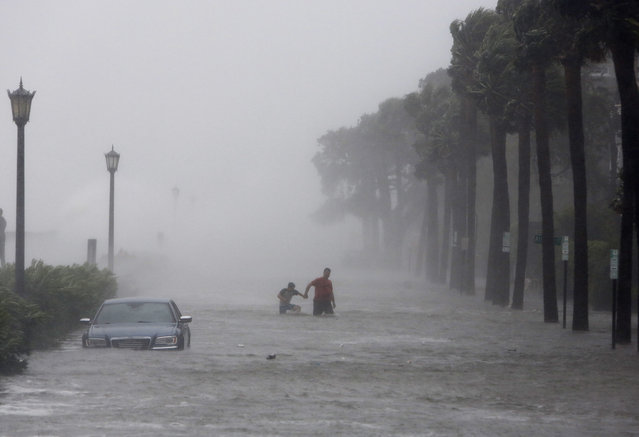 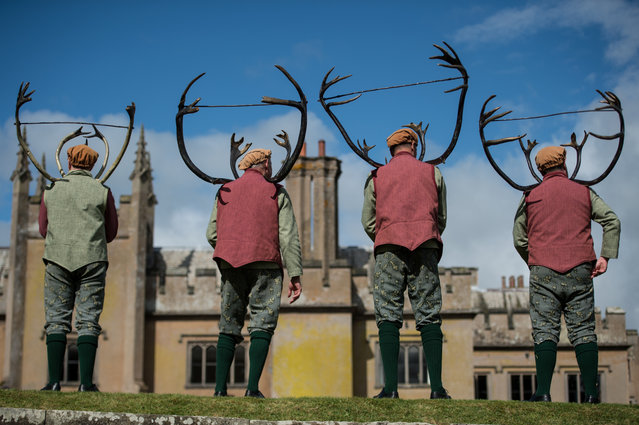 Dancers turn to face the audience after performing the “Abbots Bromley Horn Dance” in the grounds of Blithfield Hall, near the village of Abbots Bromley, central England, on September 11, 2017. The Abbots Bromley Horn Dance is an English folk dance whose origins date back to the middle ages and is performed annually on Wakes Monday. The dancers comprise of six Deer-men bearing reindeer antlers, a Fool, a Hobby Horse, a Bowman and Maid Marian. Musical accompaniment to the dance is provided by two accordion players and a boy playing a triangle. (Photo by Oli Scarff/AFP Photo) 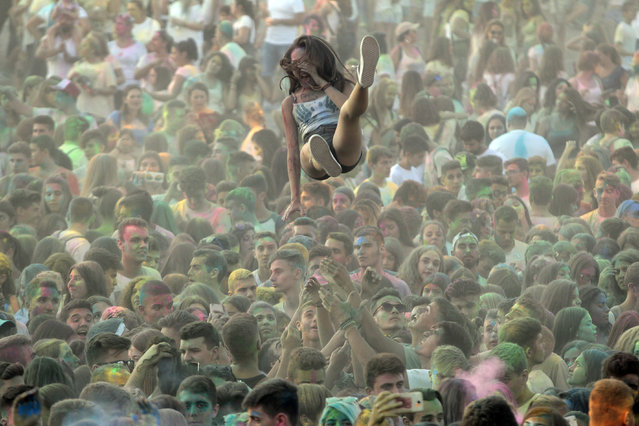 A reveller is tossed in the air during the 6th annual “Day of Colours” in Thermi, near the northern port city of Thessaloniki, Greece, September 10, 2017. (Photo by Alexandros Avramidis/Reuters) 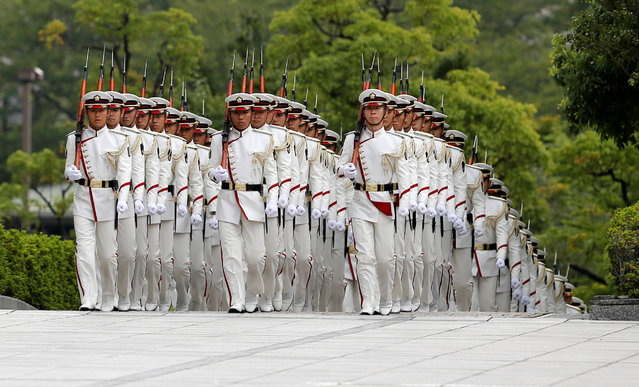 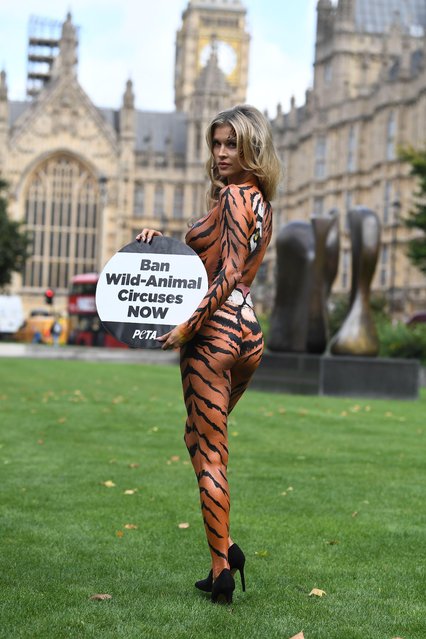 Joanna Krupa attends a PETA photocall painted as a tiger to campaign for a ban on Animal Circuses at Westminster on September 11, 2017 in London, England. (Photo by James Gourley/Rex Features/Shutterstock) 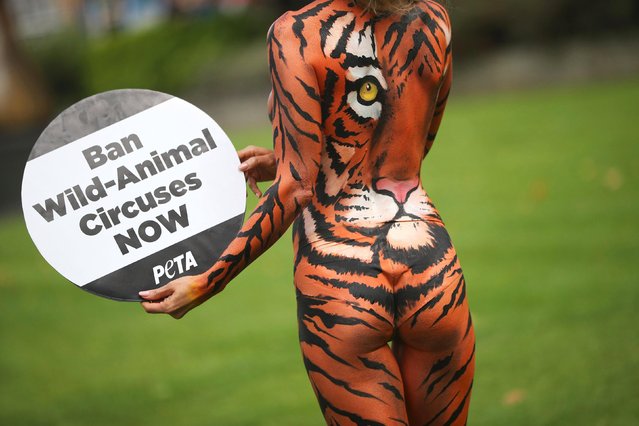 Model Joanna Krupa poses during a protest against animals in circuses, in front of the Houses of Parliament in London, Britain, September 11, 2017. (Photo by Hannah McKay/Reuters) 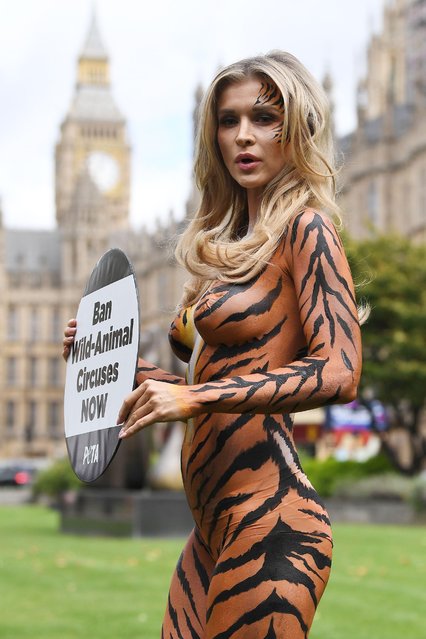