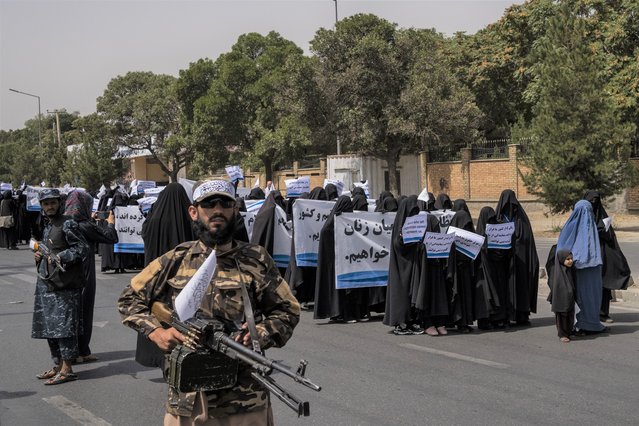 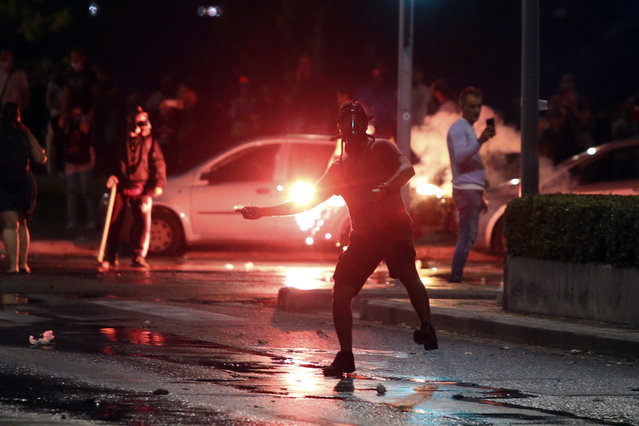 An anti-vaccine protester throws a flare during a rally, at the northern city of Thessaloniki, Greece, Saturday, September 11, 2021. While Greece's Prime Minister, Konstantinos Mitsotakis was touting the achievements of his government despite the pandemic emergency, some 3,500 vaccination deniers clashed with riot police near the venue. (Photo by Giannis Papanikos/AP Photo) 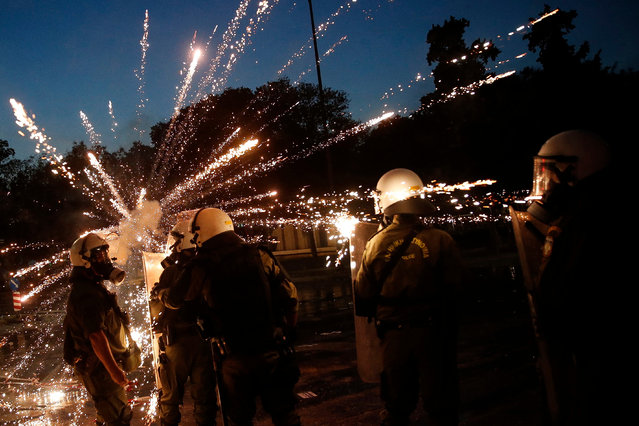 Clashes between anti-vaccine protesters and riot police outside the area where the inauguration of the 85th Thessaloniki International Fair (TIF) is taking place, in Thessaloniki, Greece, 11 September 2021. (Photo by Dimitris Tosidis/EPA/EFE) 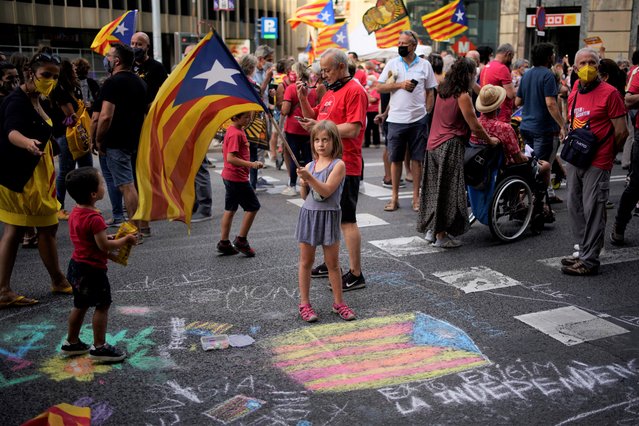 A girl waves a pro-independence flag as demonstrators march during the Catalan National Day in Barcelona, Spain, Saturday, September 11, 2021. Thousands of Catalans have rallied for independence from the rest of Spain in their first major mass gathering since the start of the pandemic. The march in Barcelona on Saturday comes before a meeting between regional leaders in northeast Catalonia and the Spanish government. (Photo by Joan Mateu Parra/AP Photo) 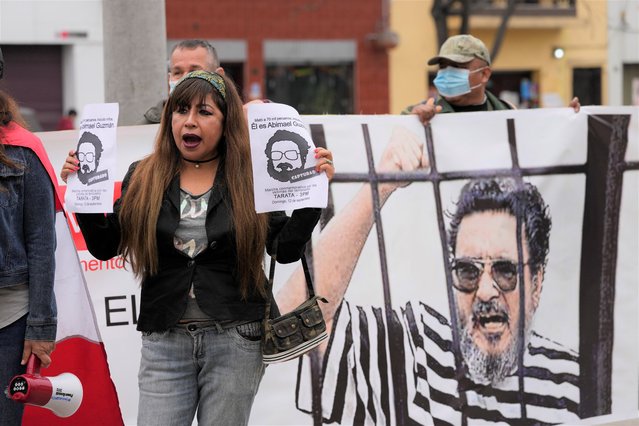 People gather outside the anti-terrorism directorate to celebrate the death of Abimael Guzman, founder and leader of the Shining Path guerrilla movement, in Lima, Peru, Saturday, September 11, 2021. Guzman, who was captured in 1992, died on Saturday in a military hospital after an illness, the Peruvian government said. He was 86. (Photo by Martin Mejia/AP Photo) 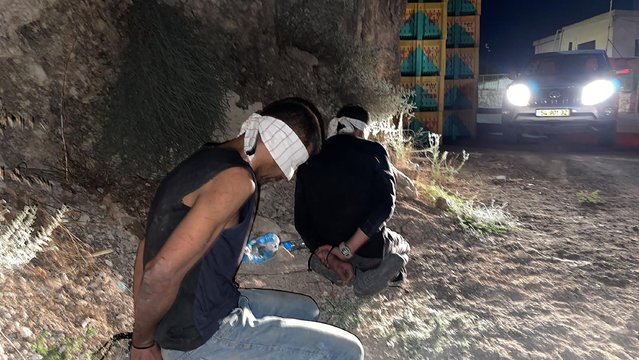 In this photo provided by Israel Police, Zakaria Zubeidi, left, and Mohammed Aradeh, two of the six Palestinian fugitives, are blindfolded and handcuffed after being recaptured in the Arab town of Umm al-Ghanam, northern Israel, Saturday, September 11, 2021. Israeli police on Saturday said they have arrested four of the six Palestinians who broke out of a maximum-security prison this week including Zubeidi, a famed militant leader whose exploits over the years have made him a well-known figure in Israel. (Photo by Israeli Police via AP Photo) 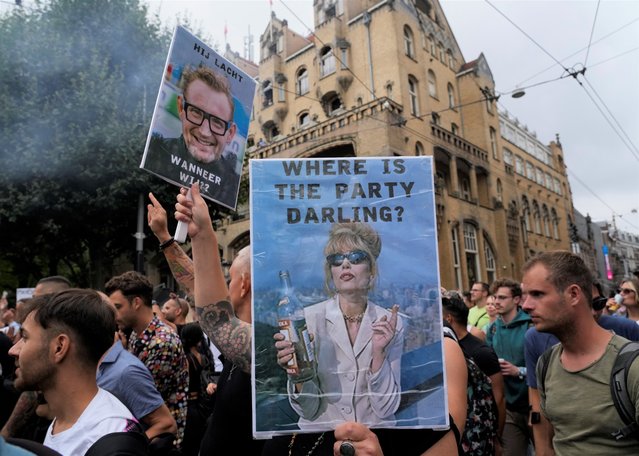 More than 10,000 people joined a protest of organizers and fans of music festivals stage against the government's COVID-19 restrictions on large-scale outdoor events in Amsterdam, Netherlands, Saturday, September 11, 2021. On Saturday, the festivals came to music fans as hundreds of performers and festival organizers called again for demonstration marches through Dutch cities to protest what they argue are unfair restrictions that have forced the cancellation of summer festivals and other events. (Photo by Peter Dejong/AP Photo) 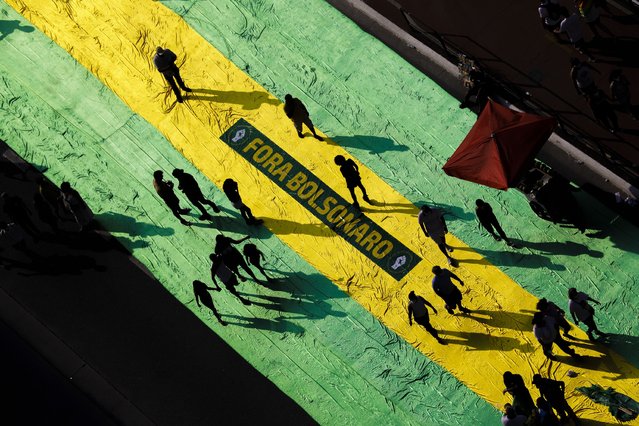 Protestors walk on a giant banner that reads in Portuguese “Bolsonaro Out”, during a protest against President Jair Bolsonaro, at Paulista Avenue, Sao Paulo, Brazil, Sunday, Sepember 12, 2021. (Photo by Marcelo Chello/AP Photo) 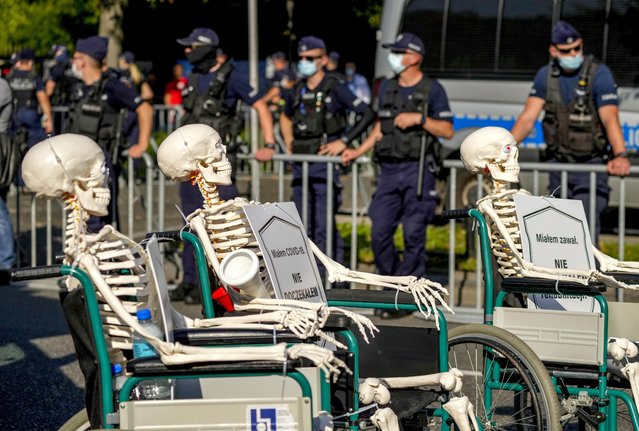 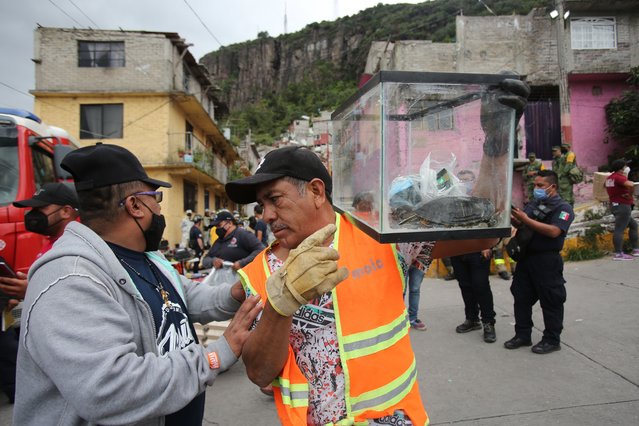 A man evacuates a turtle during search and rescue efforts at the site of a landslide that brought tons of massive boulders down on a steep hillside neighborhood, in Tlalnepantla, on the outskirts of Mexico City, Saturday, September 11, 2021. A section of the peak known as Chiquihuite gave way Friday afternoon, plunging rocks the size of small homes onto the densely populated neighborhood. (Photo by Ginnette Riquelme/AP Photo) 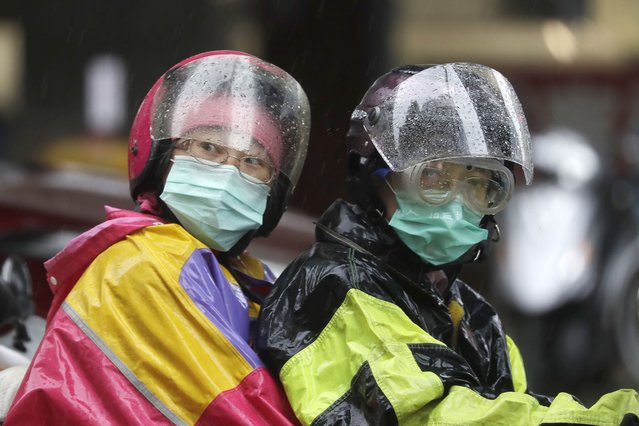 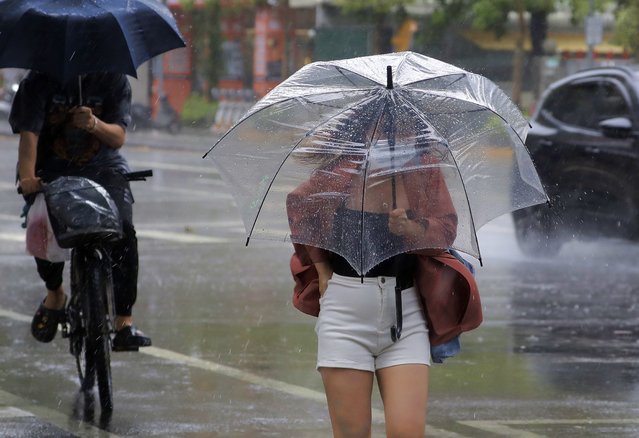 A woman struggles with her umbrella against powerful gusts of wind generated by Typhoon Chanthu in Taipei, Taiwan, Sunday, September 12, 2021. (Photo by Chiang Ying-ying/AP Photo) 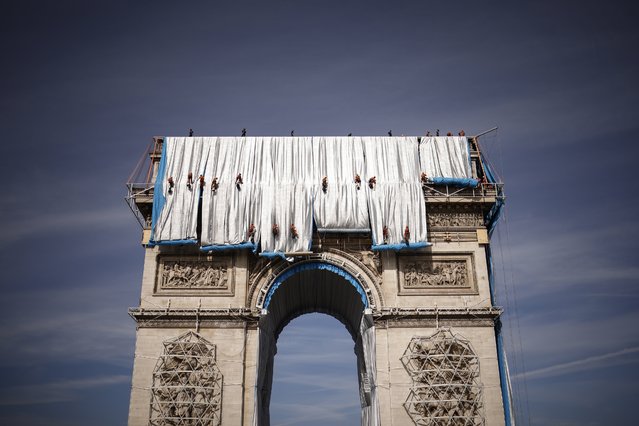 Steeplejacks work on the assembly of the “Arc de Triomphe” wrapping as part of an art installation by the late artist Christo, in Paris, France, 12 September 2021. The monumental installation will wrap the landmark Parisian monument under a 25,000 square meters silver and blue fabric from 18 September to 03 October 2021 despite the Bulgarian-born US artist Christo's death in May 2020. (Photo by Yoan Valat/EPA/EFE) 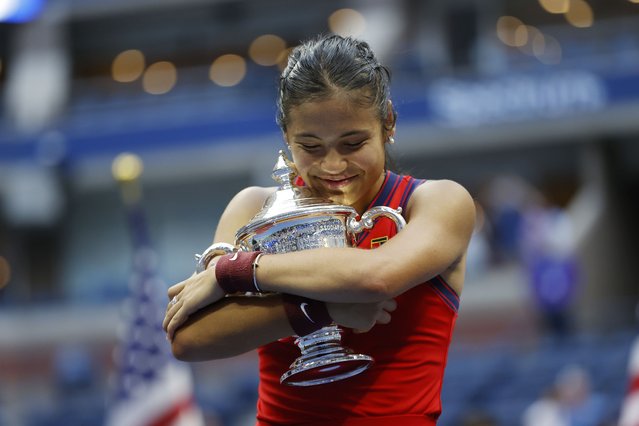 Emma Raducanu of Great Britain celebrates with the championship trophy after defeating Lelyah Fernandez of Canada to win the women's final match on the thirteenth day of the US Open Tennis Championships at the USTA National Tennis Center in Flushing Meadows, New York, USA, 11 September 2021. The US Open runs from 30 August through 12 September. (Photo by John G. Mabanglo/EPA/EFE) Festival goers enjoy Parklife festival at Heaton Park on September 11, 2021 in Manchester, United Kingdom. Nearly 80,000 people are expected to descend on the festival grounds for the two-day event where headliners Dave, Megan Thee Stallion and Disclosure will hit the stage. (Photo by Backgrid UK) 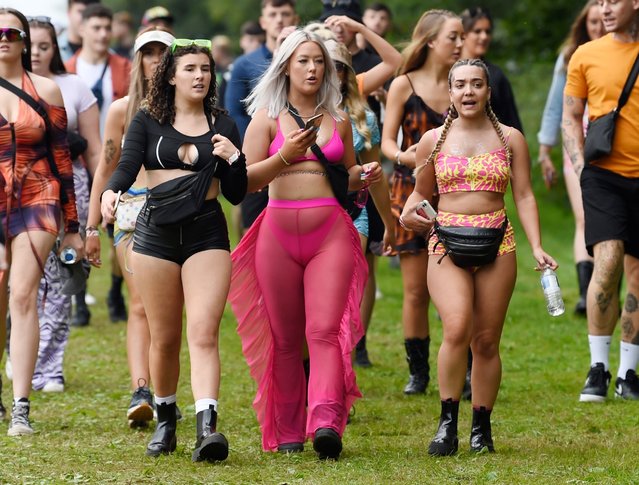 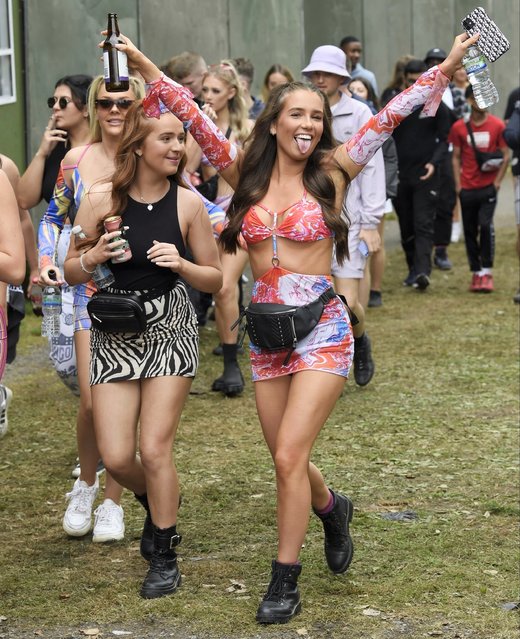 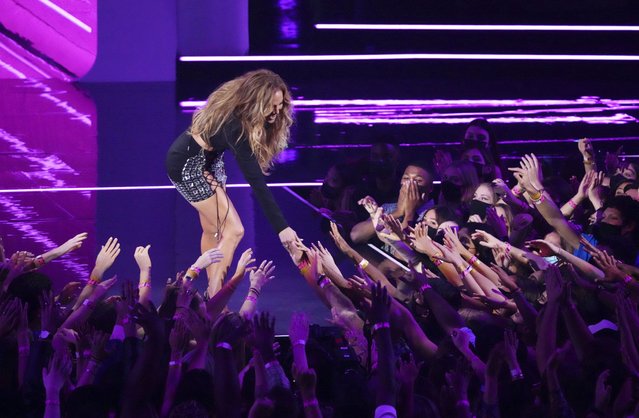 American singer and actress Jennifer Lopez presents the award for song of the year at the MTV Video Music Awards at Barclays Center on Sunday, September 12, 2021, in New York. (Photo by Charles Sykes/Invision/AP Photo) 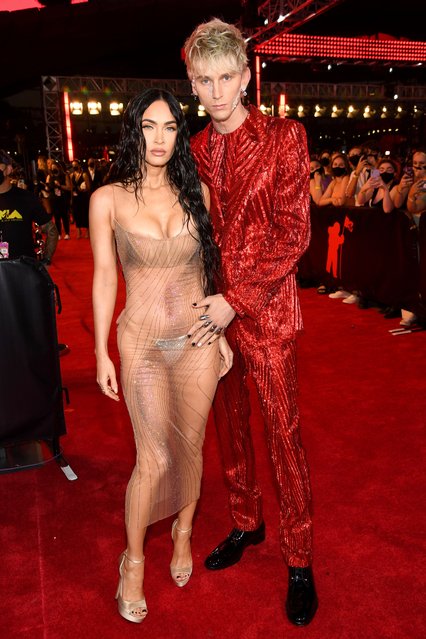 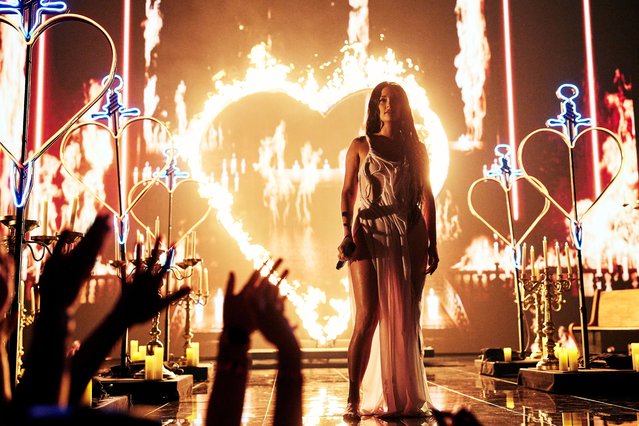