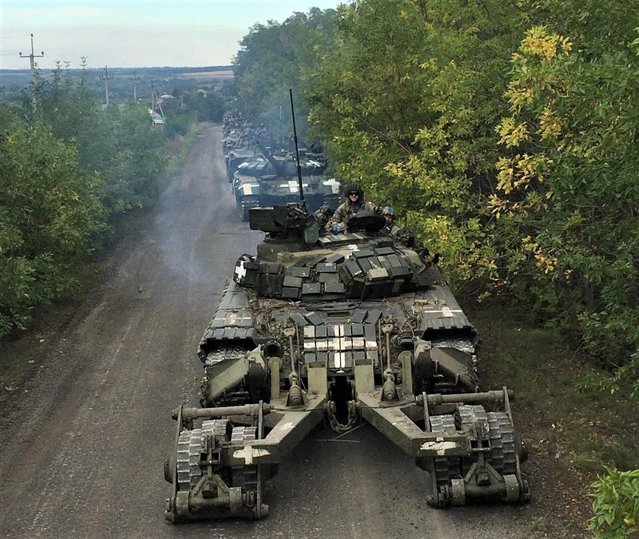 Ukrainian service members ride on tanks during a counteroffensive operation, amid Russia's attack on Ukraine, in Kharkiv region, Ukraine, in this handout picture released September 12, 2022. (Photo by Press service of the General Staff of the Armed Forces of Ukraine/Handout via Reuters) 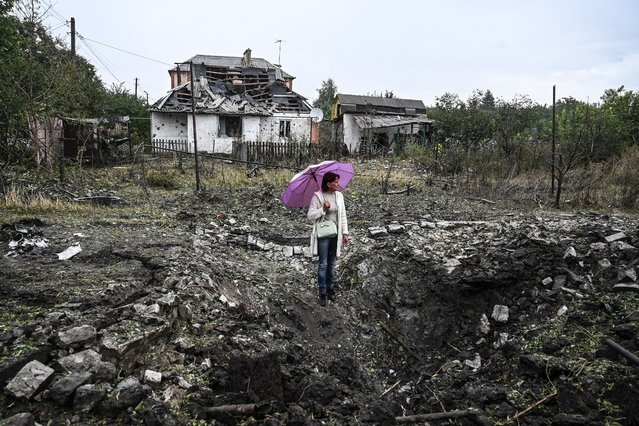 A woman stands in front of a destroyed house, in Kramatorsk, Donetsk region, on September 12, 2022, amid the Russian invasion of Ukraine. (Photo by Juan Barreto/AFP Photo) 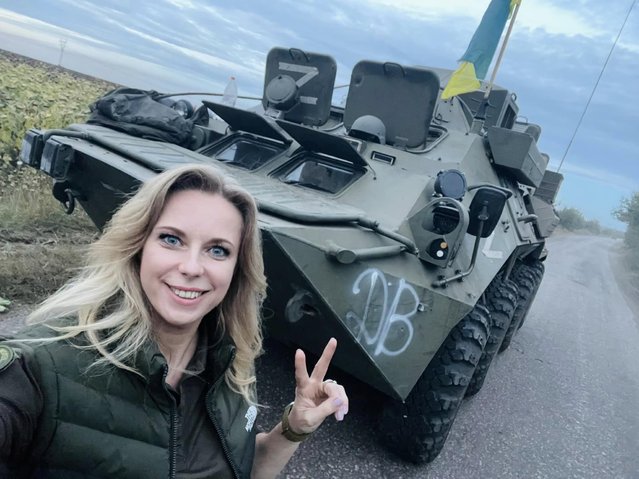 Ukrainian politician Yulia Yatsyk poses with a captured Russian vehicle in the Kharkiv region in a photo posted to her Facebook page on September 11, 2022. (Photo by Yulia Yatsyk/Facebook) 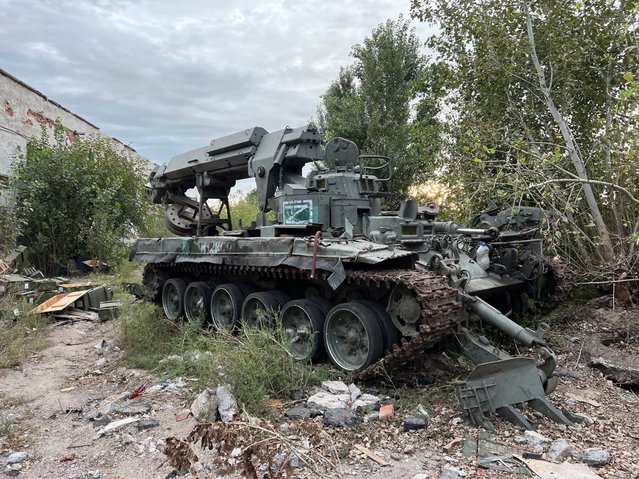 An abandoned Russian IMR-2 combat engineering vehicle reportedly photographed near the northeastern city of Izyum on September 11, 2022. Despite the massive Ukrainian territorial gains in recent days, videos from pro-Kremlin channels circulating on Telegram indicate at least some of the Ukrainian counteroffensive faced lethal resistance. (Photo by Social Media) 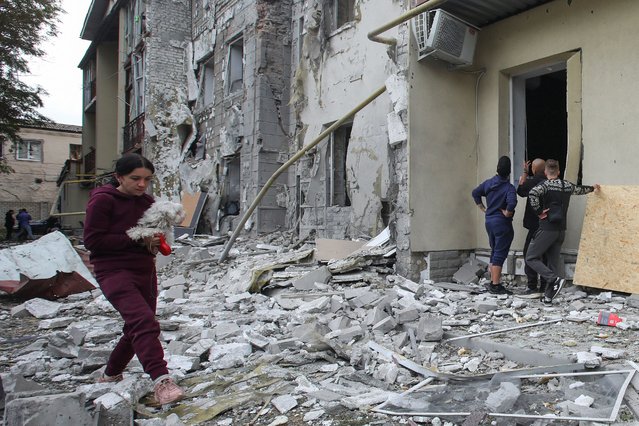 A woman carries a dog in a front of a residential building damaged by a Russian missile strike, amid Russia's attack on Ukraine, in Kharkiv, Ukraine on September 12, 2022. (Photo by Vyacheslav Madiyevskyy/Reuters) 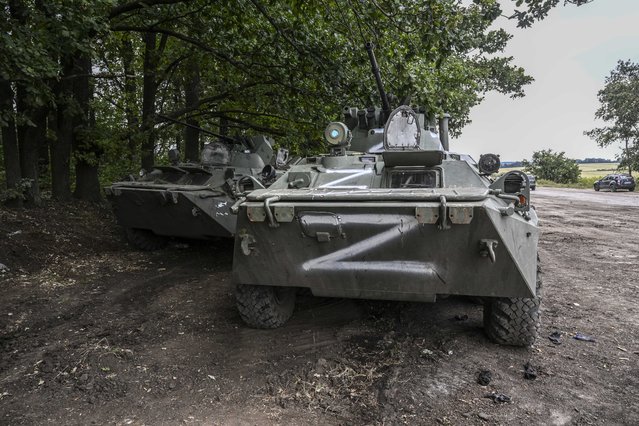 This photograph taken on September 10, 2022 shows Russian military vehicles in Balakliya, Kharkiv region, amid the Russian invasion of Ukraine. Moscow's announcement alongside Kyiv's claim to have entered the town of Kupiansk are the most significant shifts in battlefield dynamics after months of fighting in eastern Ukraine that has been dominated by Moscow. (Photo by Juan Barreto/AFP Photo) 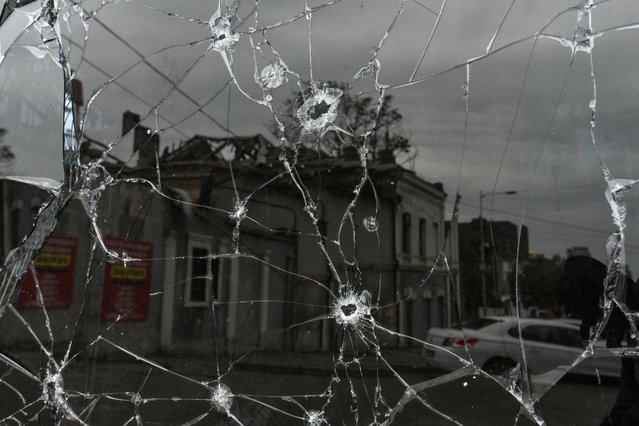 A building damaged by a Russian missile strike is reflected in a window broken with shrapnel, amid Russia's attack on Ukraine in central Dnipro, Ukraine on September 11, 2022. (Photo by Mykola Synelnykov/Reuters) 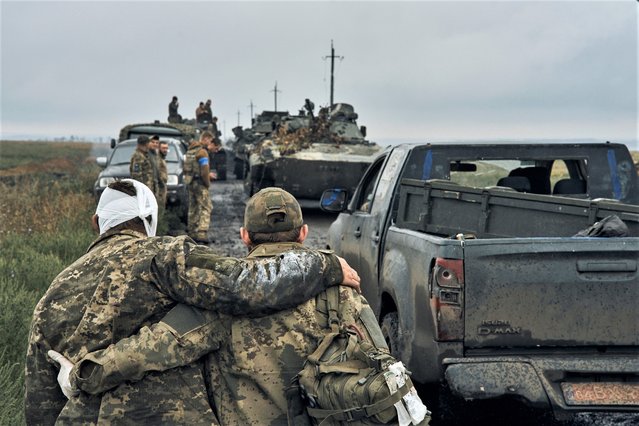 A Ukrainian soldier helps his wounded fellow soldier while military vehicles move on the road in the freed territory in the Kharkiv region, Ukraine, Monday, September 12, 2022. Ukrainian troops retook a wide swath of territory from Russia on Monday, pushing all the way back to the northeastern border in some places, and claimed to have captured many Russian soldiers as part of a lightning advance that forced Moscow to make a hasty retreat. (Photo by Kostiantyn Liberov/AP Photo) 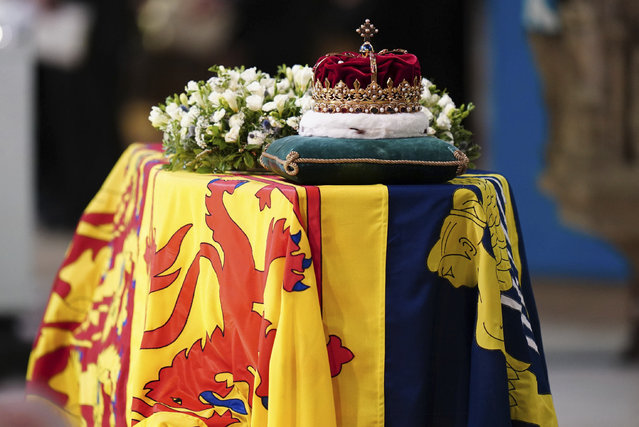 The Crown of Scotland sits atop the coffin of Queen Elizabeth II during a Service of Prayer and Reflection for her life at St Giles' Cathedral, Edinburgh, Monday, September 12, 2022. (Photo by Jane Barlow/PA Wire via AP Photo) 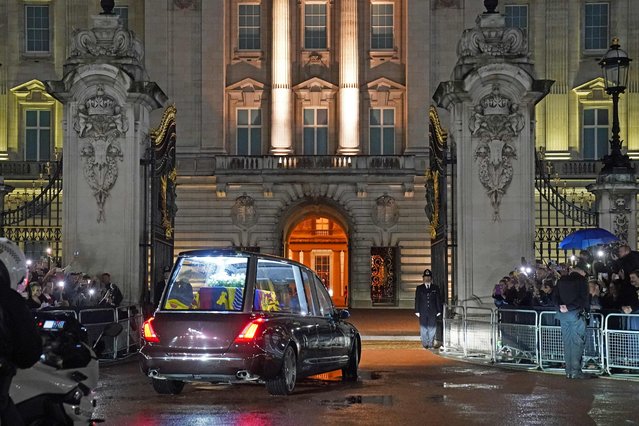 The coffin of Queen Elizabeth II arrives in the Royal Hearse at Buckingham Palace in London on September 13, 2022, where it will rest in the Palace's Bow Room overnight. Queen Elizabeth II's coffin will on Tuesday be flown by the Royal Air Force from Edinburgh to London, accompanied by the queen's only daughter Anne, the Princess Royal, and driven to Buckingham Palace, to rest in the Bow Room. (Photo by Gareth Fuller/Pool via AFP Photo) 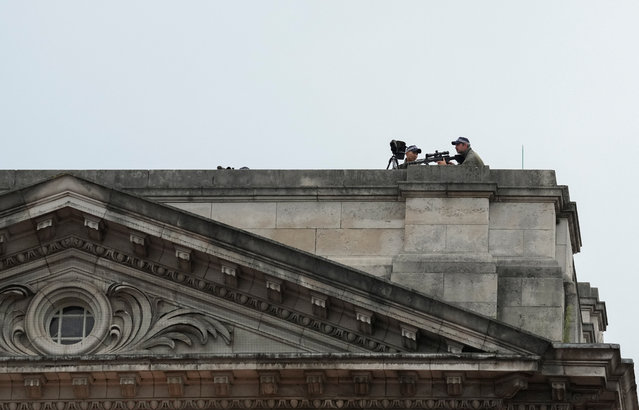 Security personnel stand guard on the terrace of Buckingham Palace, following the death of Britain's Queen Elizabeth, in London, Britain on September 13, 2022. (Photo by Maja Smiejkowska/Reuters) 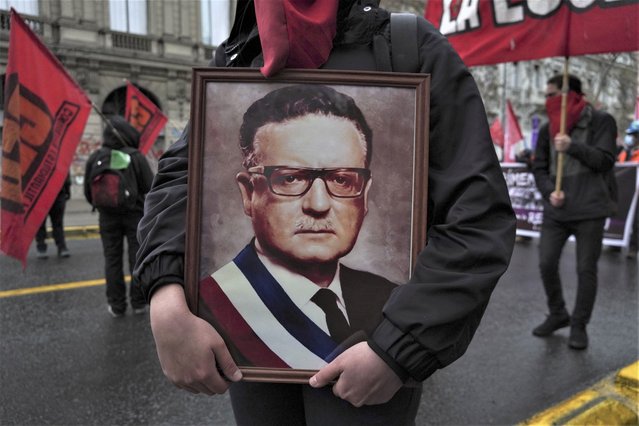 A demonstrator carries a portrait of late former President Salvador Allende during a march to commemorate the anniversary of the coup that toppled President Allende and brought dictator General Augusto Pinochet to power 49 years ago, in Santiago, Chile, Sunday, September 11, 2022. The anniversary comes one week after Chileans overwhelmingly rejected a new constitution to replace its dictatorship-era charter. (Photo by Matias Basualdo/AP Photo) 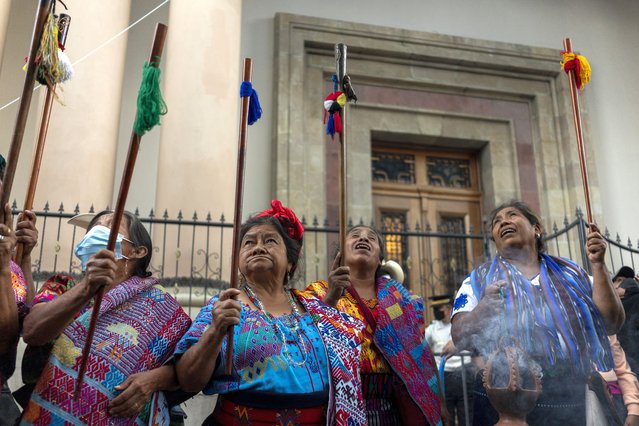 Indigenous Mayan authorities holds up their batons as they protest against Guatemala´s 201 years of independence from Spain, in Guatemala City, Monday, September 12, 2022. The protesters also demanded the resignation of President Alejandro Giammattei. (Photo by Moises Castillo/AP Photo) 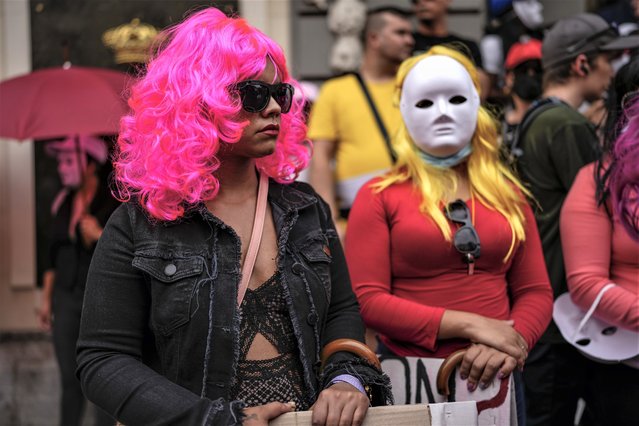 People gather during a demonstration against a bill that would penalize prostitution customers and enablers such as club owners or pimps, facing sentences up to 4 years of imprisionment in front of the Spanish Parliament in Madrid, Spain, Monday, September 12, 2022. Spain is considered to be one of the less punitive legal frames for prostitution in Europe, that would turn into a so called nordic model under the new bill, punishing both clients and enablers. (Photo by Manu Fernandez/AP Photo) 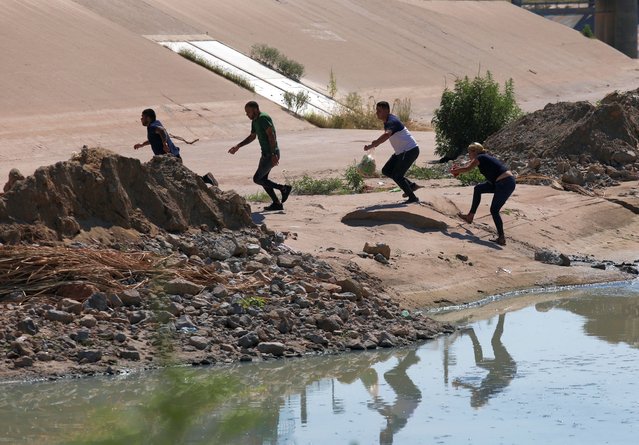 Venezuelan migrants run after crossing the Rio Bravo, or Rio Grande as it is called in the US, into the United States to seek for political asylum, as seen from Ciudad Juarez, Chihuahua State, Mexico, on September 12, 2022. (Photo by Herika Martinez/AFP Photo) 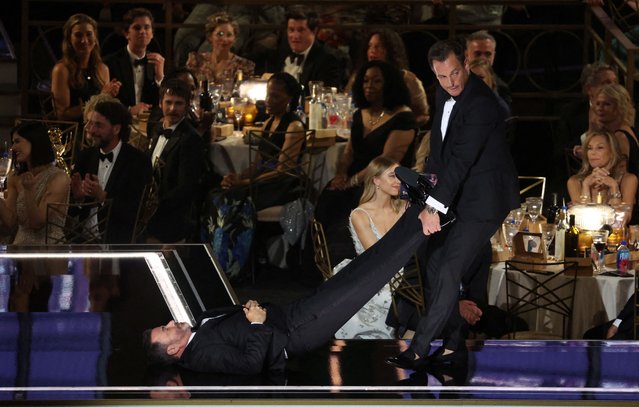 Popular comedian Jimmy Kimmel and Canadian-American actor Will Arnett perform as they present the award for Outstanding Writing For A Comedy Series at the 74th Primetime Emmy Awards in Los Angeles, California, U.S., September 12, 2022. (Photo by Mario Anzuoni/Reuters) 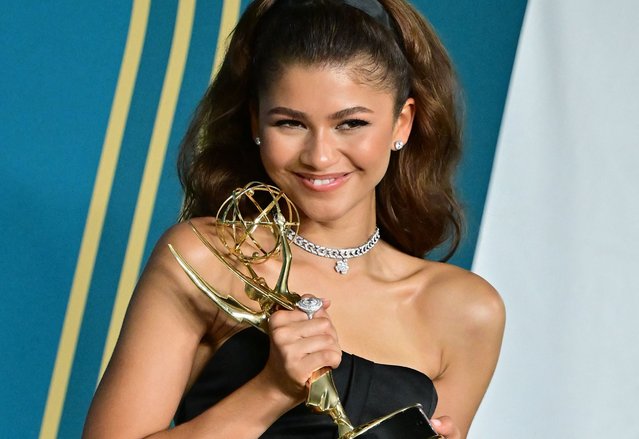 US actress Zendaya poses with the Emmy for Outstanding Lead Actress In A Drama Series for “Euphoria” during the 74th Emmy Awards at the Microsoft Theater in Los Angeles, California, on September 12, 2022. (Photo by Frederic J. Brown/AFP Photo) 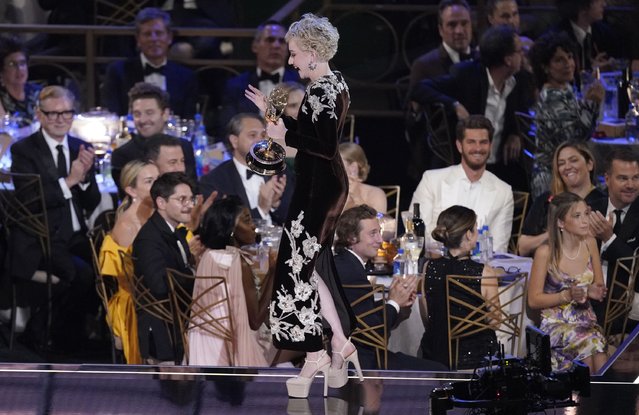 American actress Julia Garner accepts the Emmy for outstanding supporting actress in a drama series for “Ozark” at the 74th Primetime Emmy Awards on Monday, Sept. 12, 2022, at the Microsoft Theater in Los Angeles. (Photo by Mark Terrill/AP Photo) 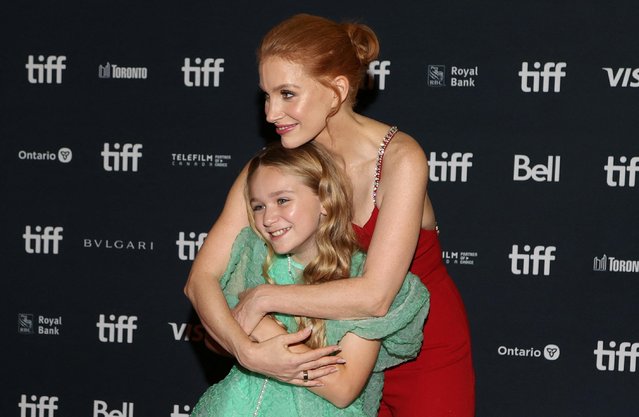 Actresses Alix West Lefler and Jessica Chastain attend the premiere of “The Good Nurse” at the Princess of Wales Theatre during the Toronto International Film Festival, Sunday, Sept. 11, 2022, in Toronto. (Photo by Carlos Osorio/Reuters) 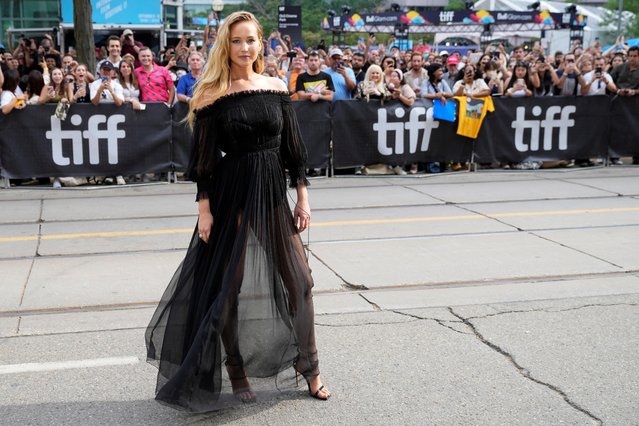 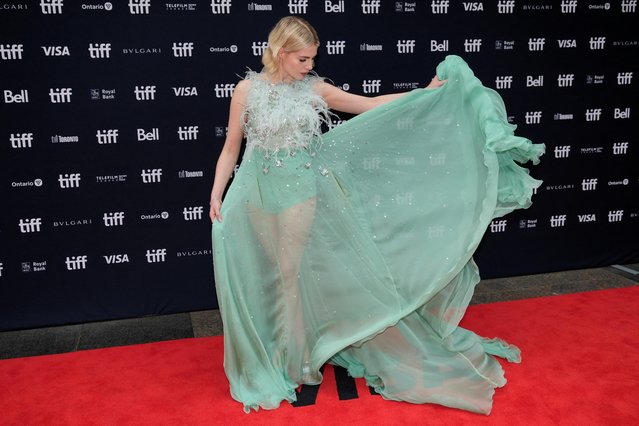 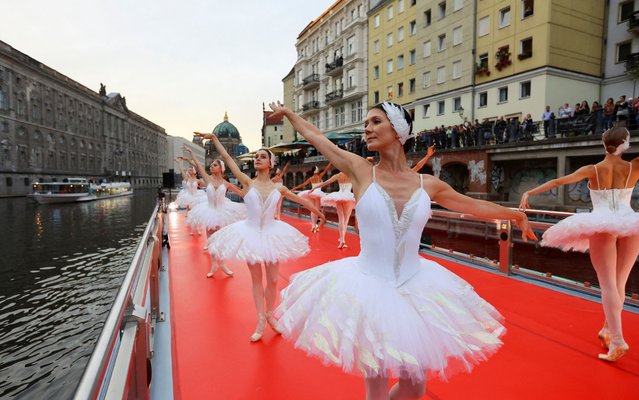 State Ballet Berlin (Staatsballett Berlin) ensemble perform their program “From Berlin with love” on the deck of a ship touring Berlin's landmarks at Spree river, Germany on September 12, 2022. (Photo by Fabrizio Bensch/Reuters) 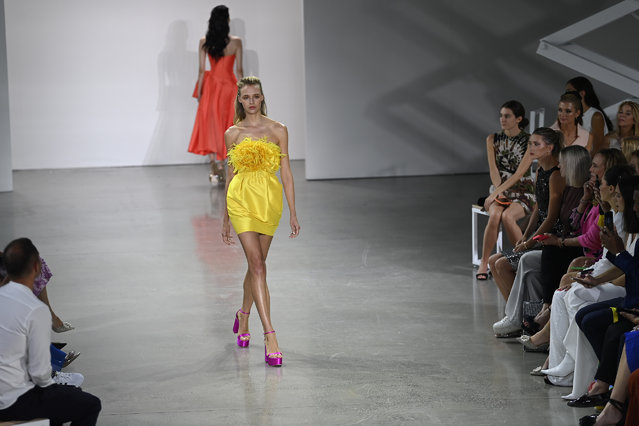 Models walk runway for the Badgley Mischka Spring '23 Runway Show during NYFW: The Shows 2022 at Spring Studios on September 11, 2022 in New York City. (Photo by Roy Rochlin/Getty Images for NYFW: The Shows) 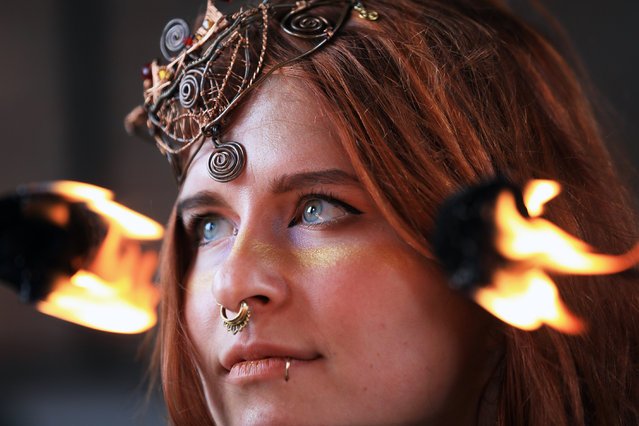