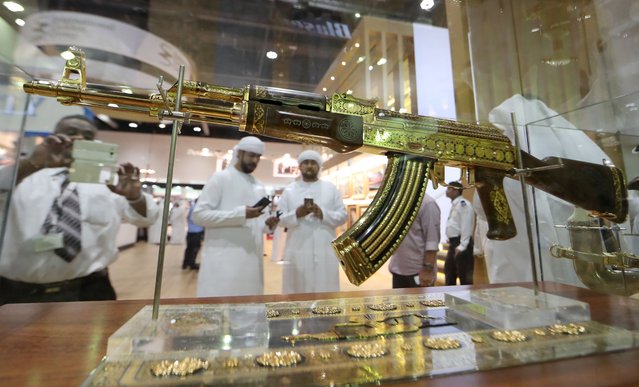 A picture taken on September 14, 2017 shows Emirati men using their cell-phones to take pictutres of an ornamented gold-plated Kalashnikov AK-47 assault rifle on display at the Arabian Saluki beauty contest as part of the Abu Dhabi International Hunting and Equestrian exhibition (ADIHEX) in the UAE capital Abu Dhabi. (Photo by Karim Sahib/AFP Photo) 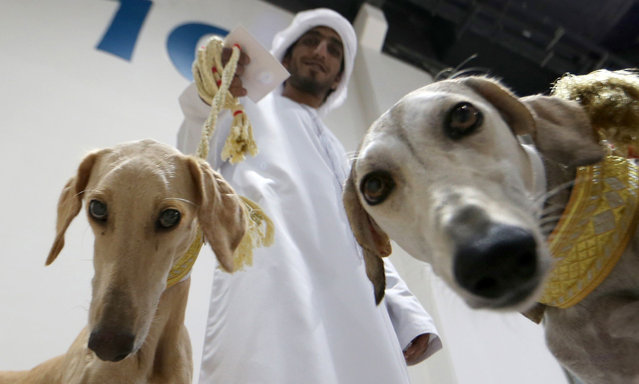 An Emirati man poses for a picture with his Saluki dogs at an Arabian Saluki beauty contest as part of the Abu Dhabi International Hunting and Equestrian exhibition (ADIHEX) in the UAE capital Abu Dhabi on September 14, 2017. (Photo by Karim Sahib/AFP Photo) 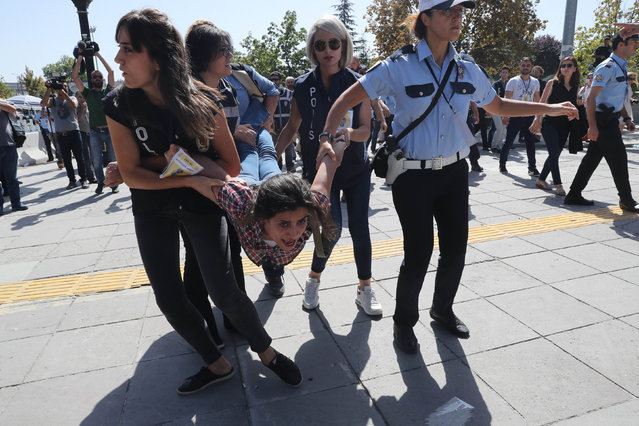 Riot police officers detain protesters during the trial of two Turkish teachers, who went on a hunger strike over their dismissal under a government decree following last year's failed coup, outside of a courthouse in Ankara, Turkey, September 14, 2017. Two imprisoned Turkish teachers who have been on a hunger strike for six months to protest their sacking in a mass purge went on trial today charged with terror-related offences. The case of academic Nuriye Gulmen and teacher Semih Ozakca, who have been jailed since May, has become a rallying cause for critics of the crackdown that followed the July 15 failed coup aimed at ousting President Recep Tayyip Erdogan. (Photo by Adem Altan/AFP Photo) 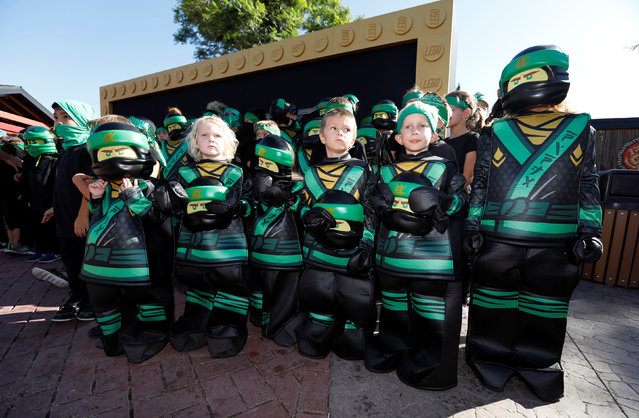 Children dressed as Ninja characters wait before a photocall at Legoland California in Carlsbad, USA on September 14, 2017. (Photo by Mario Anzuoni/Reuters) 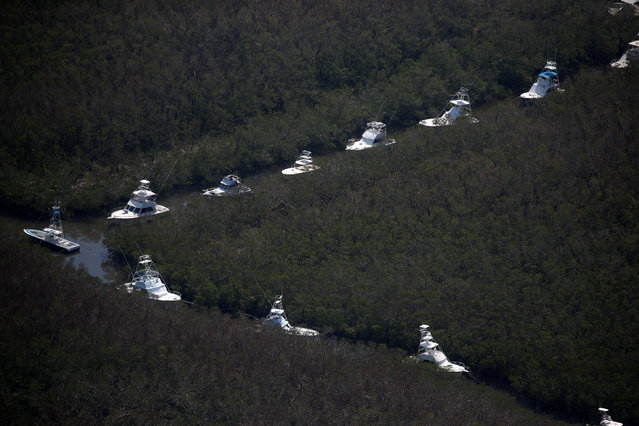 Boats lined up in a canal for protection are pictured in an aerial photo in the Keys in Marathon, Florida, U.S., September 13, 2017. (Photo by Carlo Allegri/Reuters) 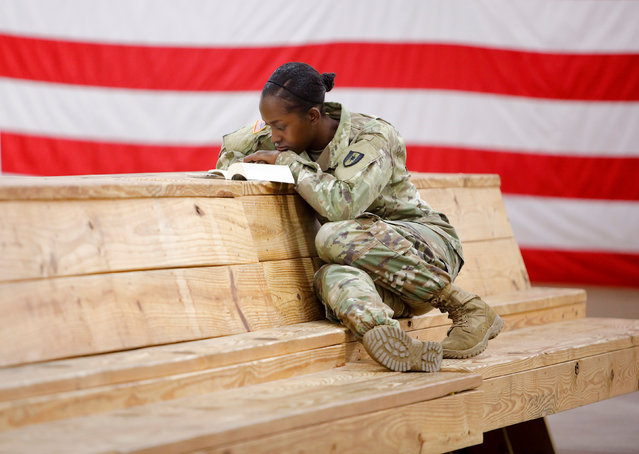 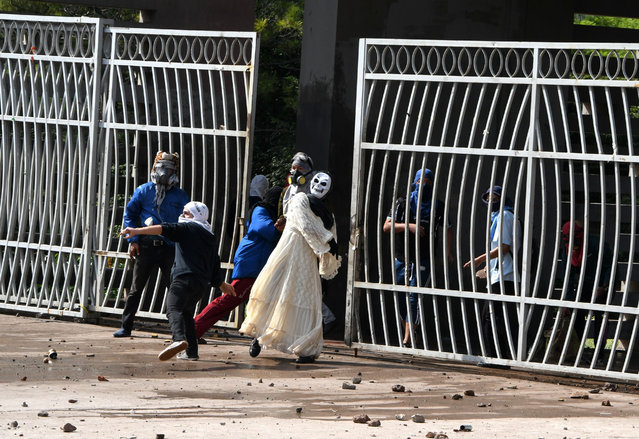 Students from the National Autonomous University of Honduras (UNAH), grouped in the University Student Movement (MEU), clash with riot police during a protest in Tegucigalpa on September 13, 2017. UNAH students have been holding protests for three months, calling for the resignation of rector Julieta Castellanos and demanding that charges against two dozen student protesters be dropped. (Photo by Orlando Sierra/AFP Photo) 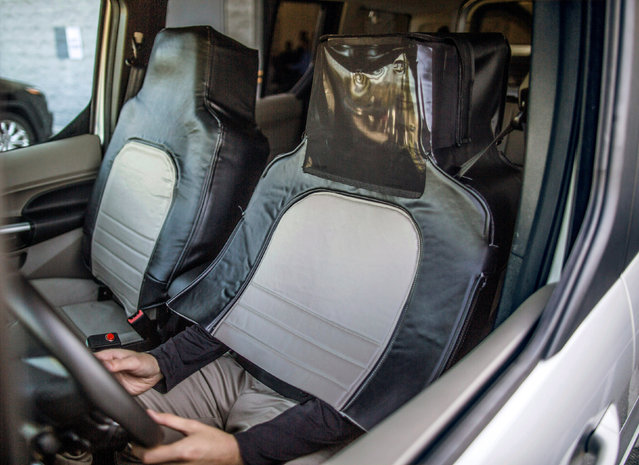 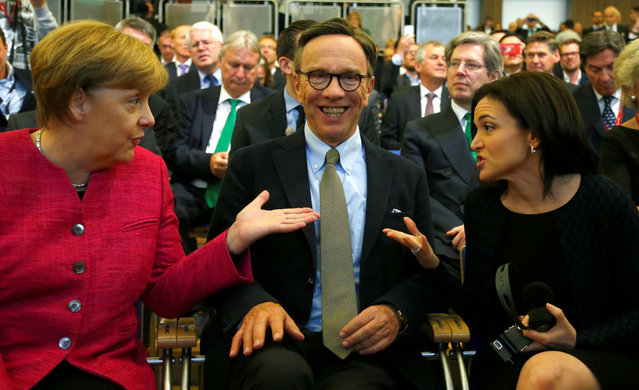 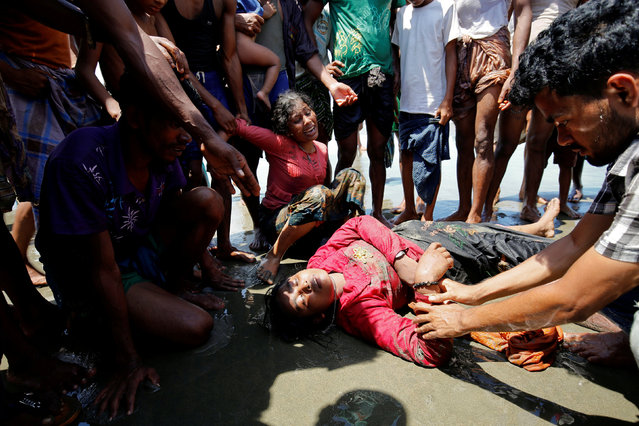 A Rohingya refugee woman cries as her relative lost consciousness after a boat capsized on the shore of Shah Porir Dwip while crossing the Bangladesh-Myanmar border in Teknaf, Bangladesh, September 14, 2017. (Photo by Mohammad Ponir Hossain/Reuters) 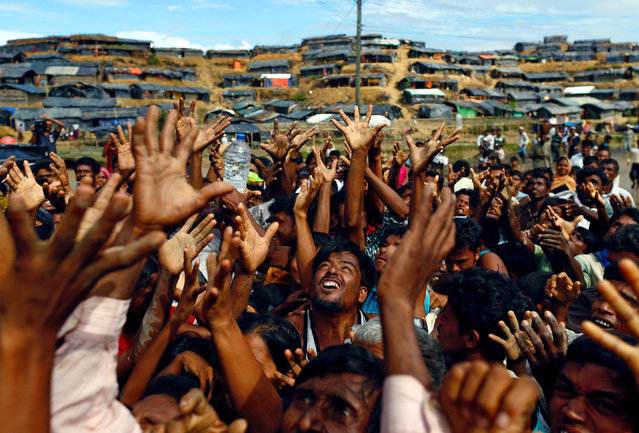 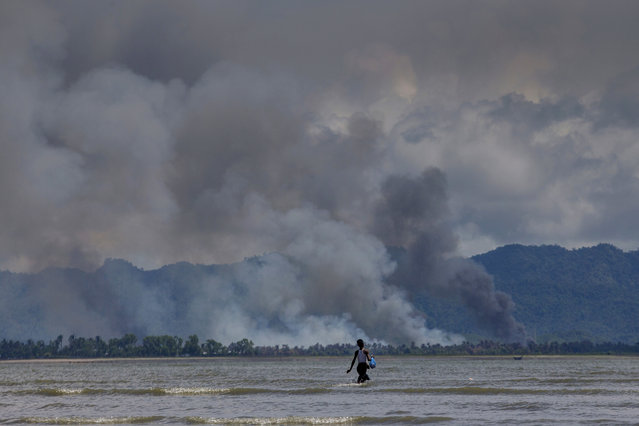 A Bangladeshi boy walks towards a parked boat as smoke rises from across the border in Myanmar, at Shah Porir Dwip, Bangladesh, Thursday, September 14, 2017. Nearly three weeks into a mass exodus of Rohingya fleeing violence in Myanmar, thousands were still flooding across the border Thursday in search of help and safety in teeming refugee settlements in Bangladesh. Those who arrived Wednesday in wooden boats described ongoing violence in Buddhist-majority Myanmar, where smoke could be seen billowing from a burning village, suggesting more Rohingya homes had been set alight. (Photo by Dar Yasin/AP Photo) 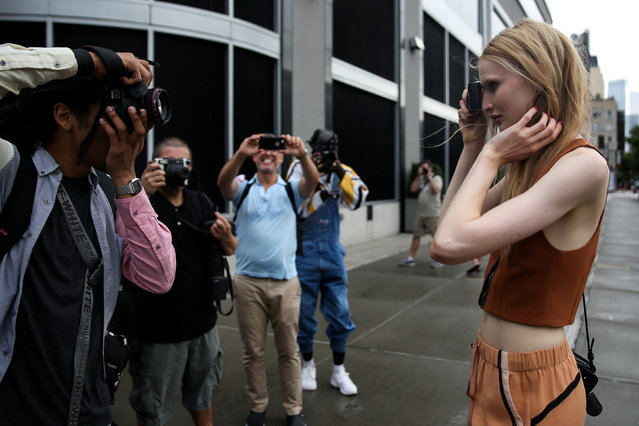 A model takes a photograph of photographers during New York Fashion Week in the Manhattan borough of New York City, U.S., September 13, 2017. (Photo by Amr Alfiky/Reuters) 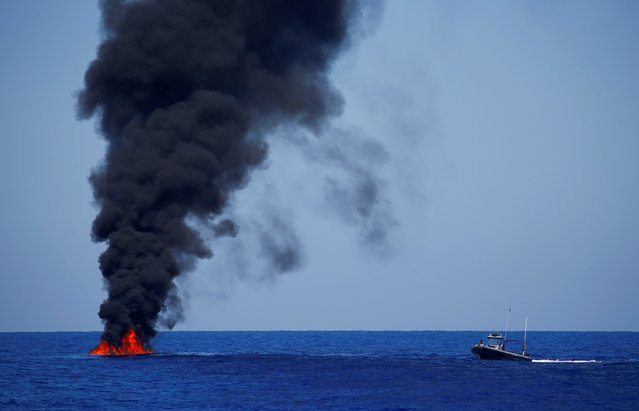 The Libyan Coast Guard burns a rubber boat at the end of a search and rescue (SAR) operation headed by the SOS Mediterranee organisation, with the MV Aquarius rescue ship (not pictured) in the Mediterranean Sea, off the Libyan Coast, September 14, 2017. (Photo by Tony Gentile/Reuters) 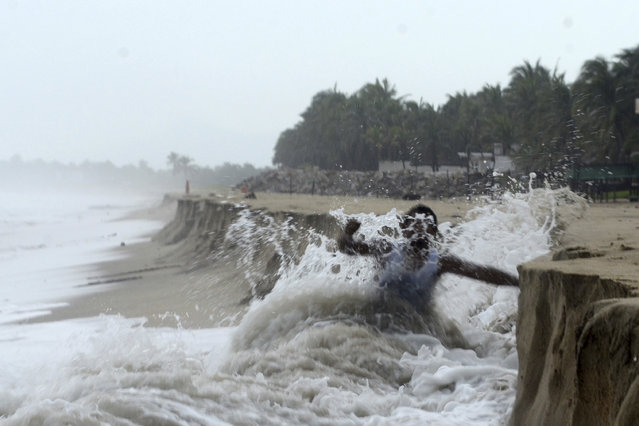 A man fights against waves caused by approaching Hurricane Max that took away part of the beach in Pie de La Cuesta, on the outskirts of Acapulco, Guerrero state, Thursday, September 14, 2017. Max has strengthened into a Category 1 hurricane off Mexico's southern Pacific coast and is forecast to make landfall later Thursday along the coast of Guerrero state. It's a region that includes the resort city of Acapulco. (Photo by Bernandino Hernandez/AP Photo) 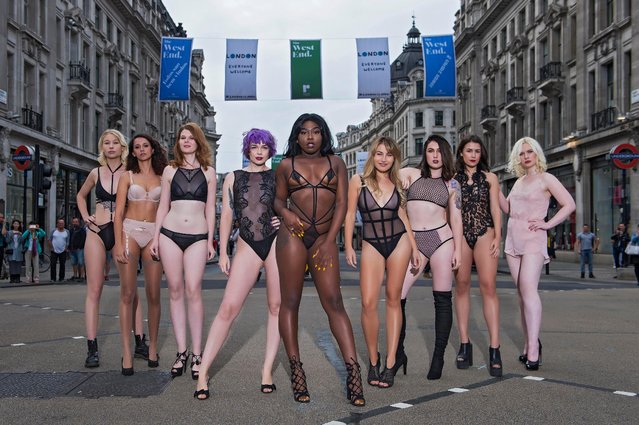 Bluebella Lingerie advertising photo shoot, Oxford Circus, London, Great Britain on September 14, 2017. Bluebella has staged its most daring lingerie campaign yet, sending 19 models to strut their stuff in skimp smalls on one of London's busiest junctions. Bluebella organised the show early in the morning to minimise congestion ahead of London Fashion Week which starts on Friday 15th September. The “models” included a medical PA, a company boss, four students, two actors, a musician and two writers. (Photo by Cavendish Press/LESAUVAGE/Bluebella) 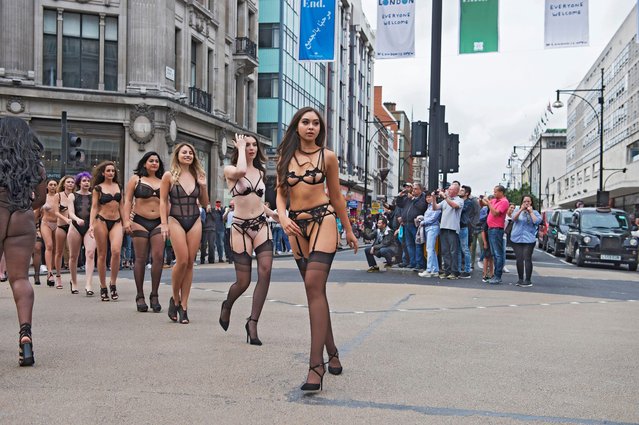 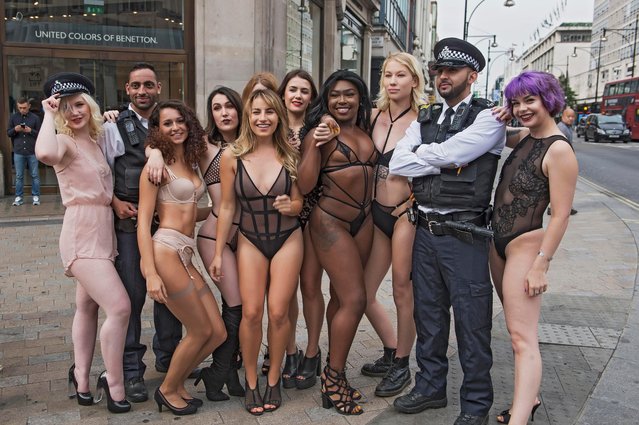 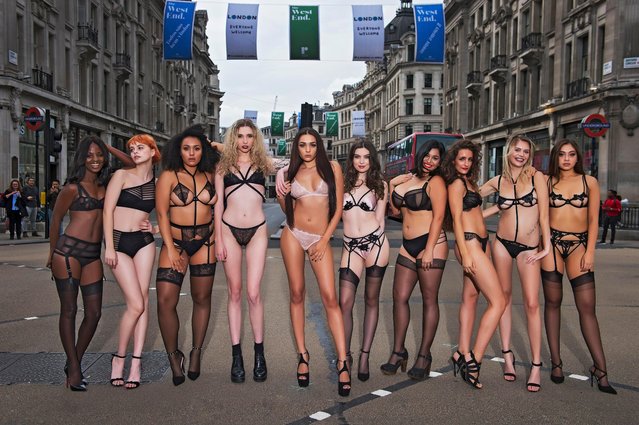