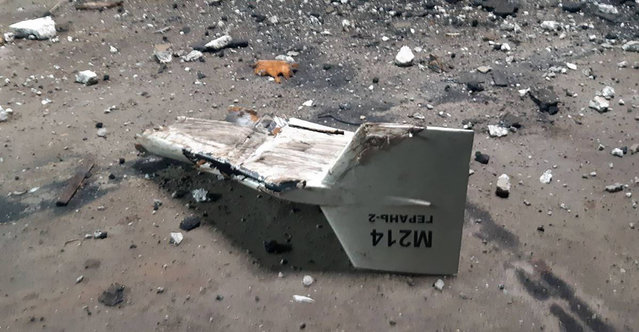 This undated photograph released by the Ukrainian military's Strategic Communications Directorate shows the wreckage of what Kyiv has described as an Iranian Shahed drone downed near Kupiansk, Ukraine. Ukraine's military claimed Tuesday, September 13, 2022, for the first time that it encountered an Iranian-supplied suicide drone used by Russia on the battlefield, showing the deepening ties between Moscow and Tehran as the Islamic Republic's tattered nuclear deal with world powers hangs in the balance. (Photo by Ukrainian military's Strategic Communications Directorate via AP Photo) 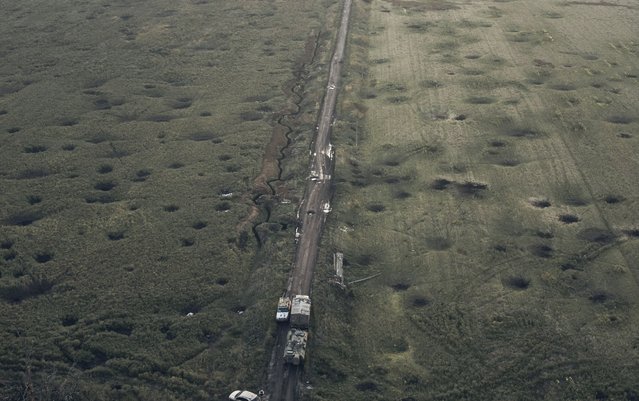 A field is covered with craters left by the shelling close to Izium, Kharkiv region, Ukraine, Tuesday, September 13, 2022. (Photo by Kostiantyn Liberov/AP Photo) 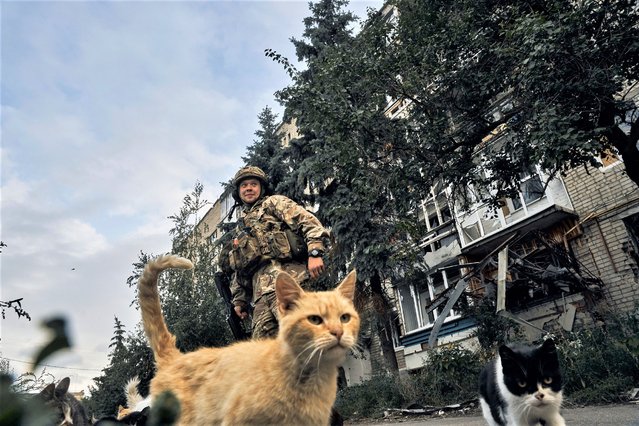 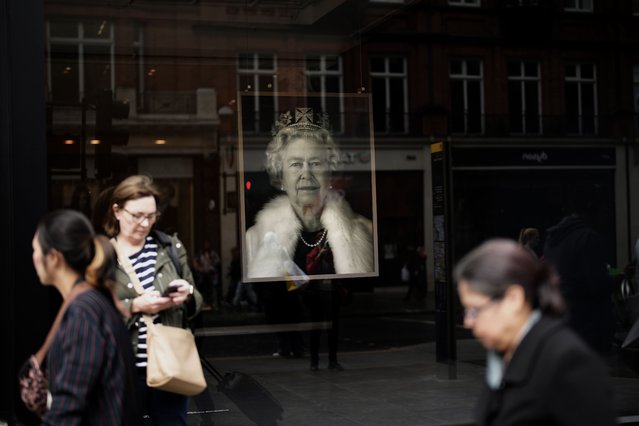 A portrait of the late Queen Elizabeth II is on display in a London shop, England, Tuesday, September 13, 2022. Queen Elizabeth II, Britain's longest-reigning monarch and a rock of stability across much of a turbulent century, died Thursday Sept. 8, 2022, after 70 years on the throne. She was 96. (Photo by Christophe Ena/AP Photo) 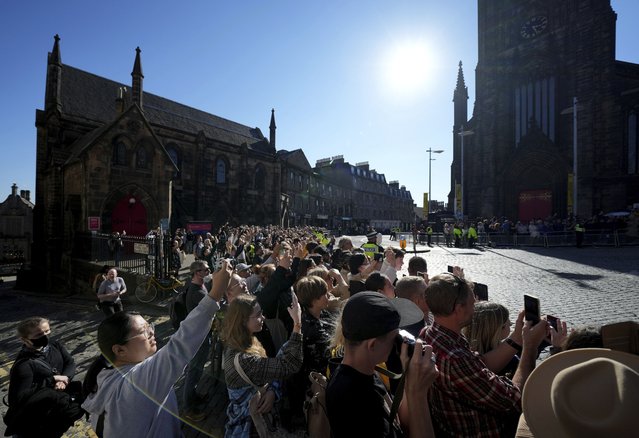 People take photos with their mobile phones along route prior to the departure of the hearse carrying Queen Elizabeth's coffin from St Giles Cathedral to Edinburgh Airport in Edinburgh, Scotland, Tuesday, September 13, 2022. After lying in the cathedral most of Tuesday, the queen's coffin will be flown back to London and driven to her official London home, Buckingham Palace. (Photo by Jon Super/AP Photo) 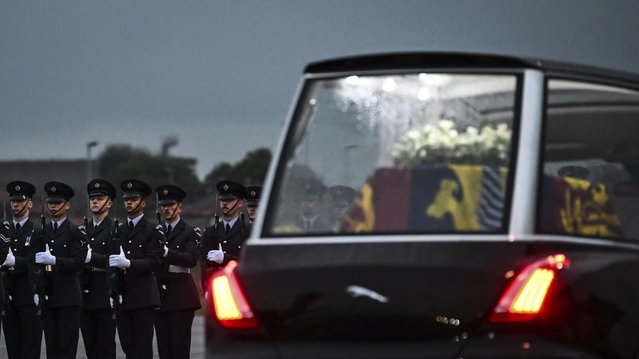 The Queen's Colour Squadron, RAF, stand by as the coffin of Queen Elizabeth II is taken away from the Royal Air Force Northolt airbase, London, Tuesday, September 13, 2022. The queen's coffin is flown back to RAF Northolt, an air force base in London, and driven to Buckingham Palace. (Photo by Ben Stansall, Pool Photo via AP Photo) 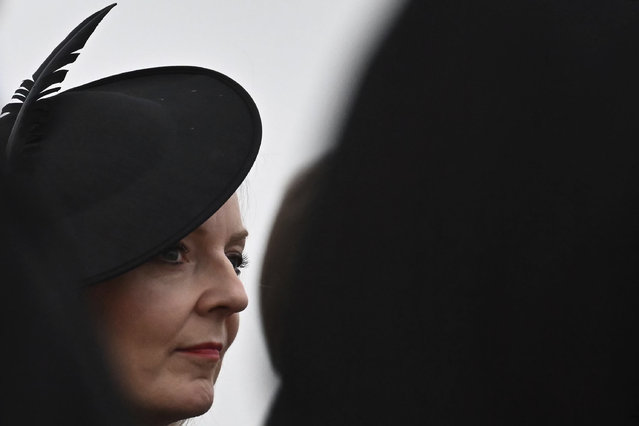 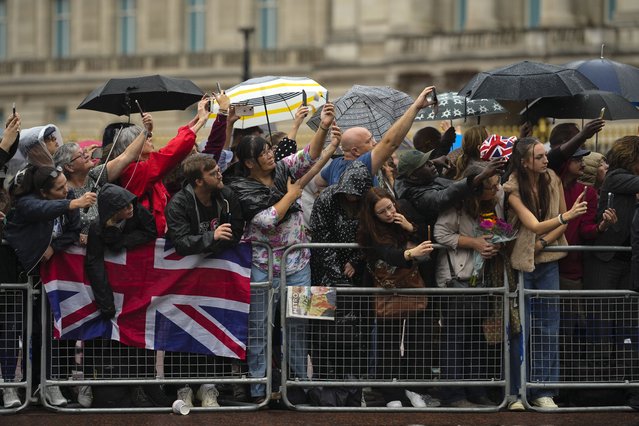 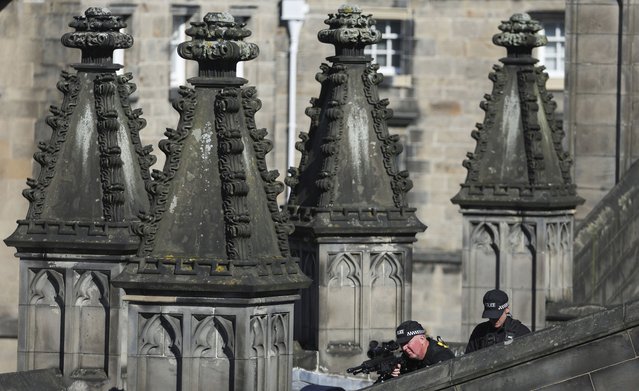 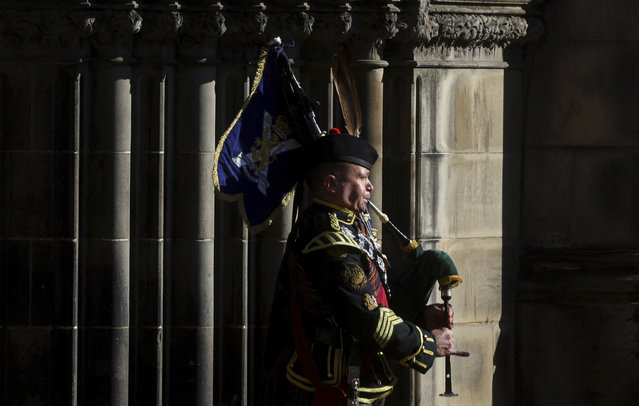 A piper plays outside St. Giles Cathedral, in Edinburgh, Scotland, Tuesday, September 13, 2022. King Charles III and Camilla, the Queen Consort, flew to Belfast from Edinburgh on Tuesday, the same day the queen’s coffin will be flown to London from Scotland. (Photo by Kai Pfaffenbach/Pool Photo via AP Photo) 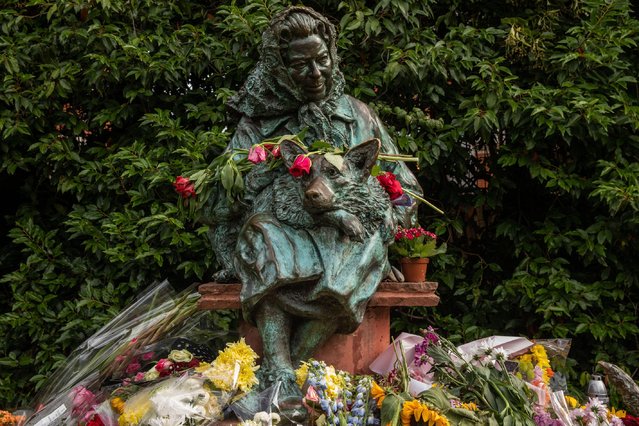 The Windsor Lady, a sculpture by Lydia Karpinska of Queen Elizabeth II and her corgi dogs, is pictured decked with floral tributes in Windsor, UK on September 12, 2022. (Photo by Mark Kerrison/Alamy Live News) 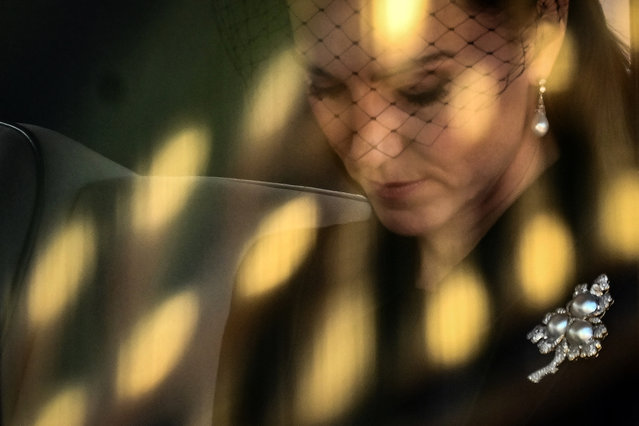 Britain's Catherine, Princess of Wales is driven behind the coffin of Queen Elizabeth II, adorned with a Royal Standard and the Imperial State Crown and pulled by a Gun Carriage of The King's Troop Royal Horse Artillery, during a procession from Buckingham Palace to the Palace of Westminster, in London on September 14, 2022. Queen Elizabeth II will lie in state in Westminster Hall inside the Palace of Westminster, from Wednesday until a few hours before her funeral on Monday, with huge queues expected to file past her coffin to pay their respects. (Photo by Marco Bertorello/AFP Photo) 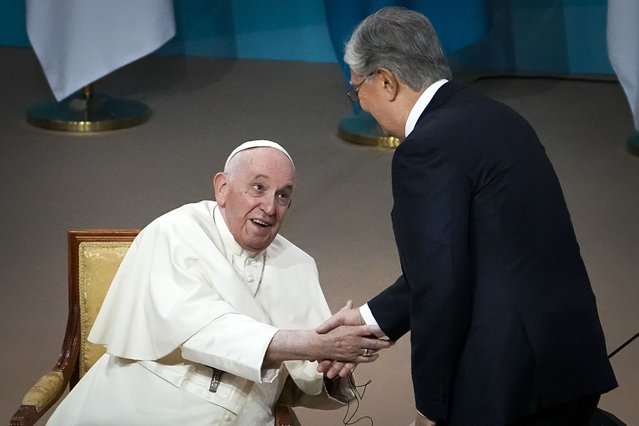 Kazakhstan's President Kassym-Jomart Tokayev, right, greets Pope Francis as he arrives at a meeting with authorities, civil society and diplomats at Qazaq Concert Hall in Nur-Sultan, Kazakhstan, Tuesday, September 13, 2022. Pope Francis begins a 3-days visit to the majority-Muslim former Soviet republic to minister to its tiny Catholic community and participate in a Kazakh-sponsored conference of world religious leaders. (Photo by Alexander Zemlianichenko/AP Photo) 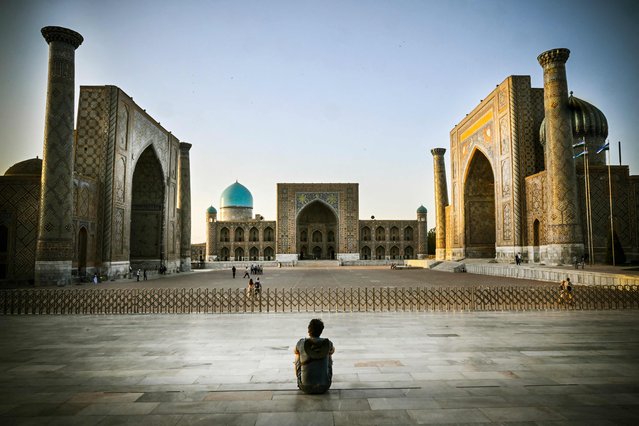 A man sits at the Registan square in downtown Samarkand on September 13, 2022. A regional summit this week where Russian President Vladimir Putin will meet China's Xi Jinping and other Asian leaders will showcase an “alternative” to the Western world, the Kremlin said on September 13, 2022. Putin and Xi will be joined by the leaders of India, Pakistan, Turkey, Iran and several other countries for the summit of the Shanghai Cooperation Organisation (SCO) in the Uzbek city of Samarkand on 16-17 September 2022. (Photo by Alexander Nemenov/AFP Photo) 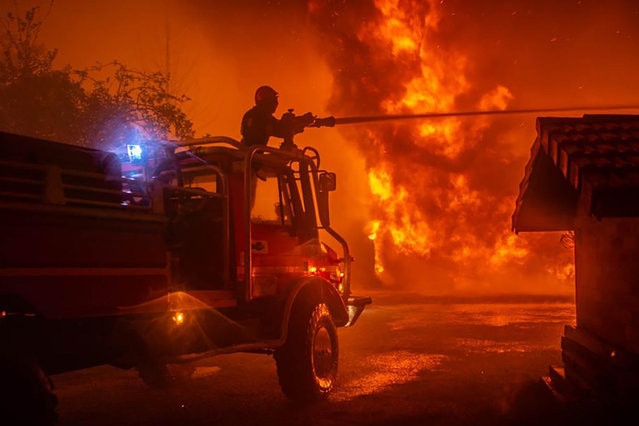 This photo provided by the SDIS33 fire brigade shows firemen trying to pull off a wildfire near the village of Saumos, southwestern France, Monday September12, 2022. New wildfires raging in southwestern France have torn through over 1,000 hectares of land and forced the evacuation of residents amid record temperatures for September. Fires that began to rage Monday caused the evacuation of over 500 in the Gironde region. (Photo by SDIS33 via AP Photo) 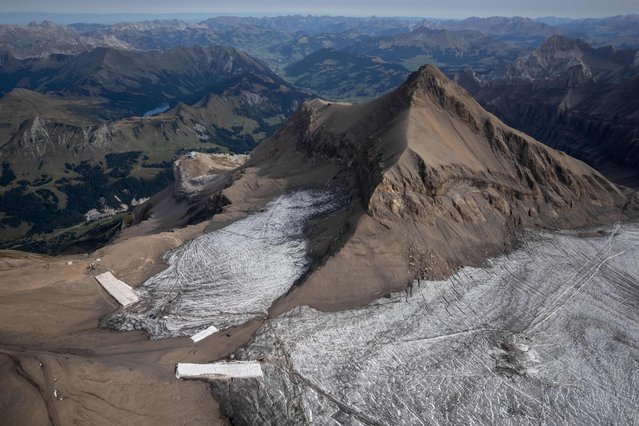 This aerial picture taken on September 13, 2022 at Glacier 3000 resort above Les Diablerets shows the Tsanfleuron pass free of the ice that covered it for at least 2,000 years next to blankets covering snow from the last winter season to prevent it from melting. The thick layer of ice that has covered a Swiss mountain pass between Scex Rouge glacier and Tsanfleuron glacier since at least the Roman era has melted away completely. Following a dry winter, the summer heatwaves hitting Europe have been catastrophic for the Alpine glaciers, which have been melting at an accelerated rate. (Photo by Fabrice Coffrini/AFP Photo) 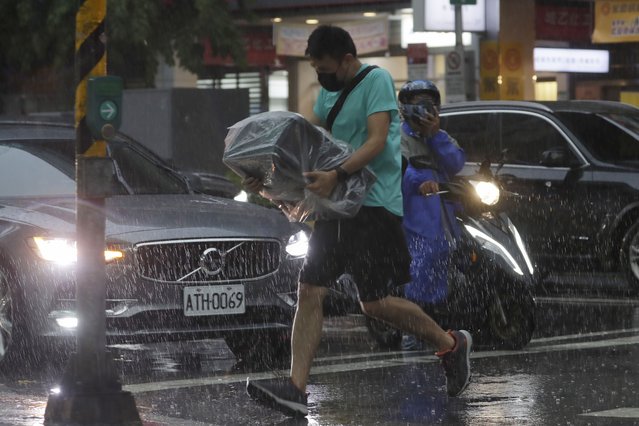 A man runs in the rain ahead of the approaching Typhoon Muifa in Taipei, Taiwan, Monday, September 12, 2022. (Photo by Chiang Ying-ying/AP Photo) 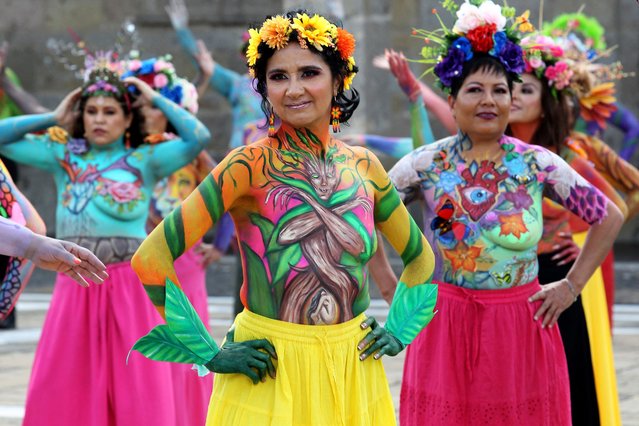 Women who were victims of breast cancer pose for a picture during the 2022 edition of “A brushstroke for life” in Guadalajara, Mexico, on September 12, 2022. (Photo by Ulises Ruiz/AFP Photo) 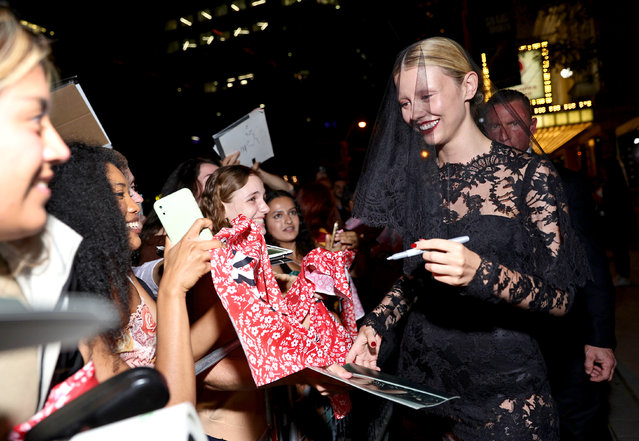 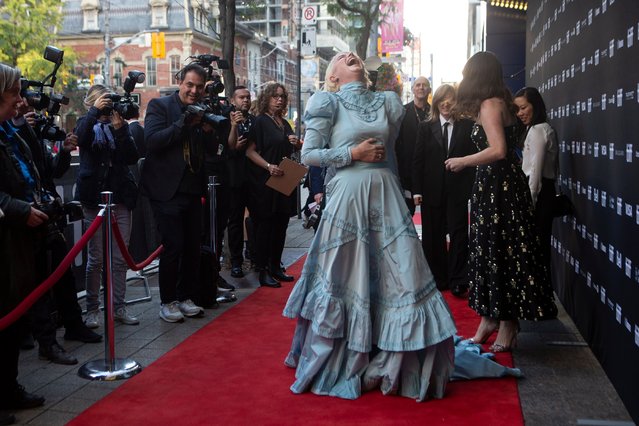 Irish actress Jessie Buckley reacts to a joke as she arrives on the red carpet for “Women Talking”, at the Toronto International Film Festival, in Toronto, on Tuesday, September 13, 2022. (Photo by Chris Young/The Canadian Press via AP Photo) 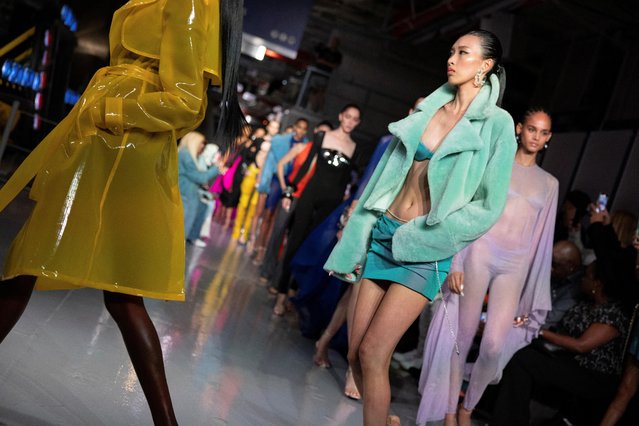 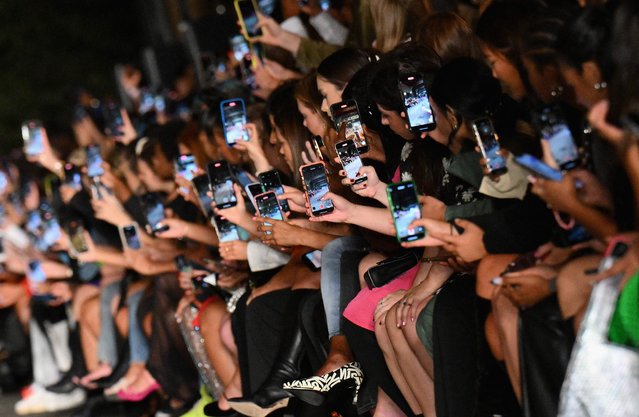 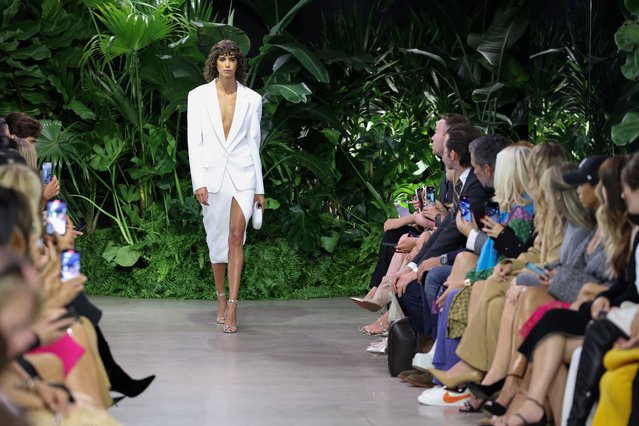 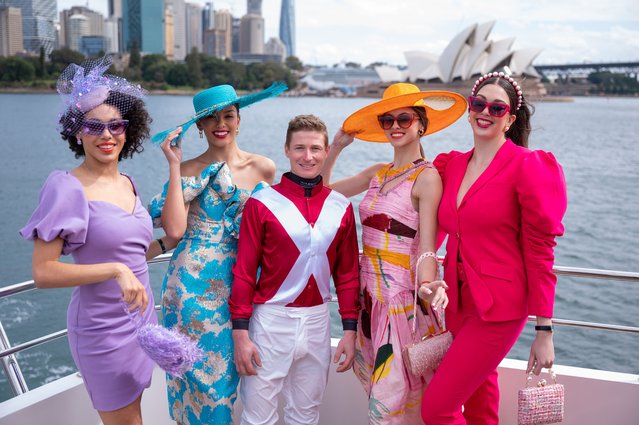