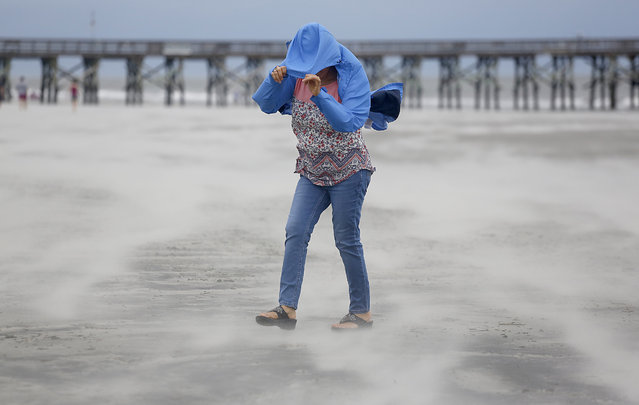 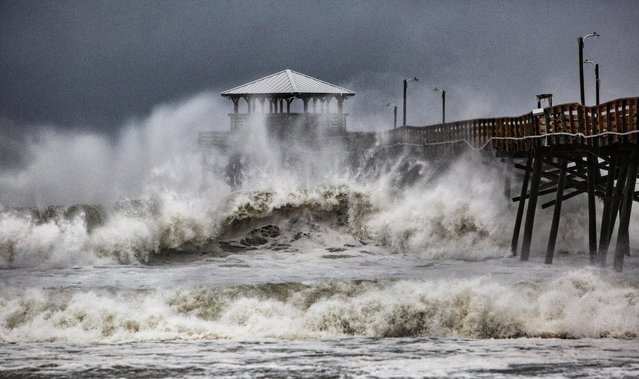 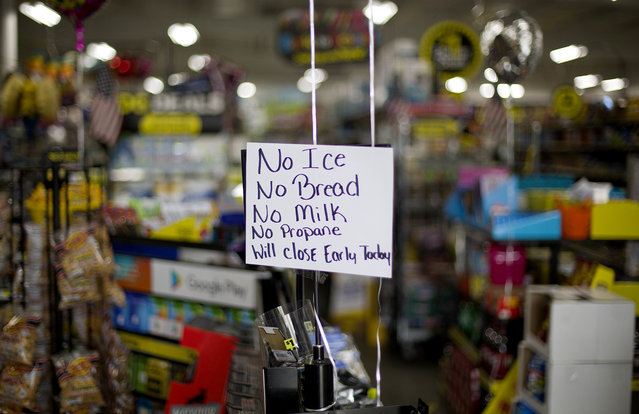 A message greets shoppers of supplies no longer available as Hurricane Florence approaches the east coast in Nichols, S.C., Thursday, September 13, 2018. The residents of this tiny inland town who rebuilt after Hurricane Matthew destroyed 90 percent of the homes are uneasy as forecasters warn inland flooding from Florence's rain could be one of the most dangerous and devastating parts of the storm. (Photo by David Goldman/AP Photo) 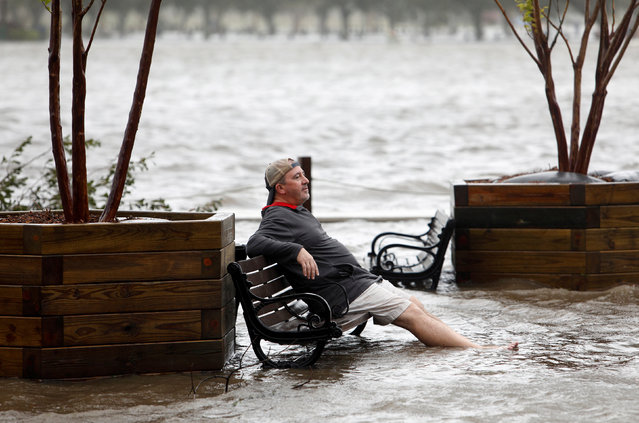 A man sits on a park bench in a flooded park as the Cape Fear River rises above its usual height in Wilmington, North Carolina, U.S., September 14, 2018. (Photo by Jonathan Drake/Reuters) 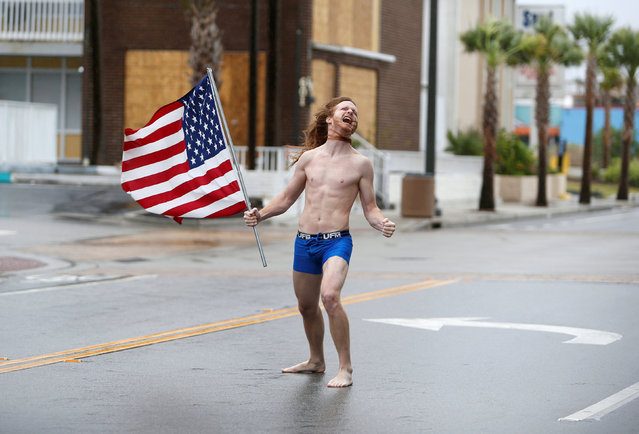 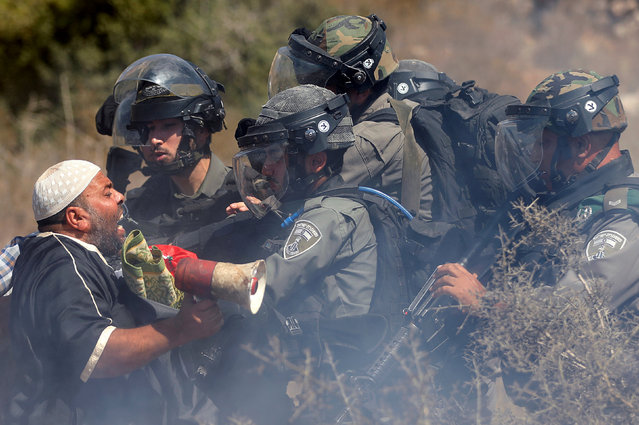 A Palestinian man scuffles with Israeli troops during a protest against Israeli land seizures for Jewish settlements, in the village of Ras Karkar, near Ramallah in the occupied West Bank September 14, 2018. (Photo by Mohamad Torokman/Reuters) 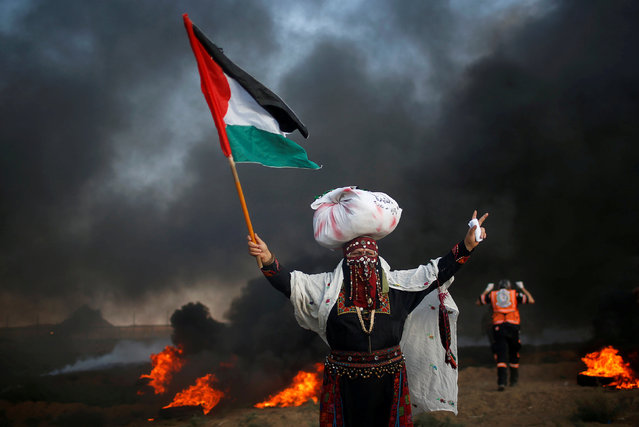 A woman holds a Palestinian flag during a protest calling for lifting the Israeli blockade on Gaza and demand the right to return to their homeland, at the Israel-Gaza border fence, east of Gaza City September 14, 2018. (Photo by Mohammed Salem/Reuters) 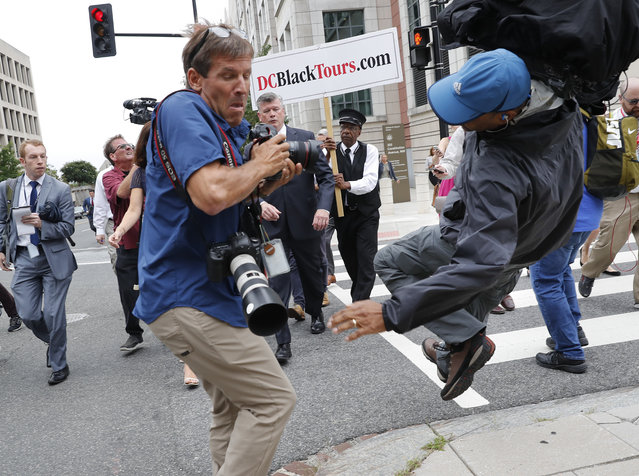 Attorney Kevin Downing, center, with the defense team for Paul Manafort, watches as television cameraman Chris Plater, trips and falls backwards outside of federal court in Washington, Friday, September 14, 2018. Former Trump campaign chairman Paul Manafort has pleaded guilty to two federal charges as part of a cooperation deal with prosecutors. The deal requires him to cooperate “fully and truthfully” with special counsel Robert Mueller's Russia investigation. The charges against Manafort are related to his Ukrainian consulting work, not Russian interference in the 2016 presidential election. (Photo by Pablo Martinez Monsivais/AP Photo) 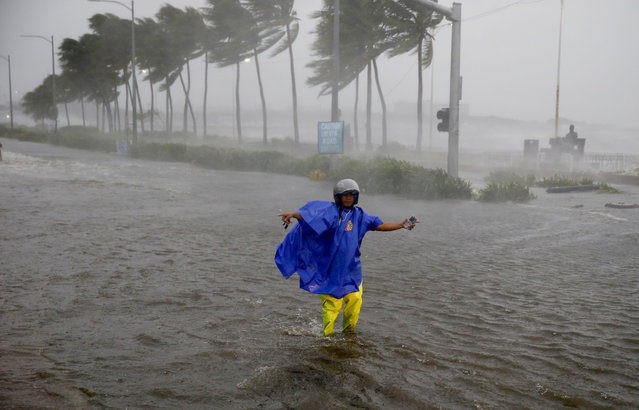 A traffic enforcer gestures at motorists to avoid a flooded street at the onslaught of Typhoon Mangkhut which barreled into northeastern Philippines before dawn Saturday, September 15, 2018 in Manila, Philippines. The typhoon slammed into the Philippines' northeastern coast early Saturday, its ferocious winds and blinding rain ripping off tin roof sheets and knocking out power, and plowed through the agricultural region at the start of the onslaught. (Photo by Bullit Marquez/AP Photo) 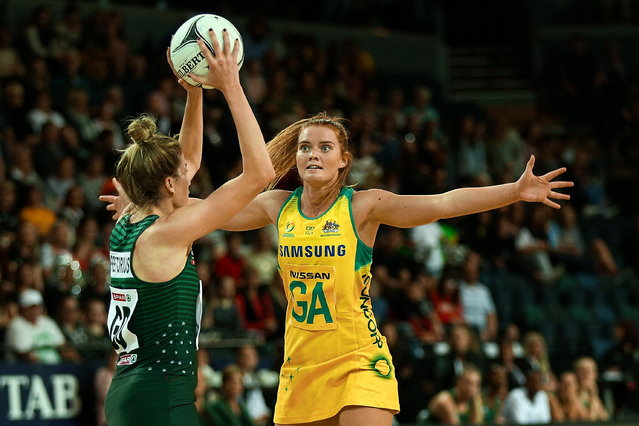 Stephanie Wood of the Diamonds blocks Karla Pretorius of the Proteas during the Netball Quad Series match between the South African Proteas and the Australian Diamonds at Spark Arena in Auckland, New Zealand, 15 September 2018. (Photo by David Rowland/EPA/EFE) 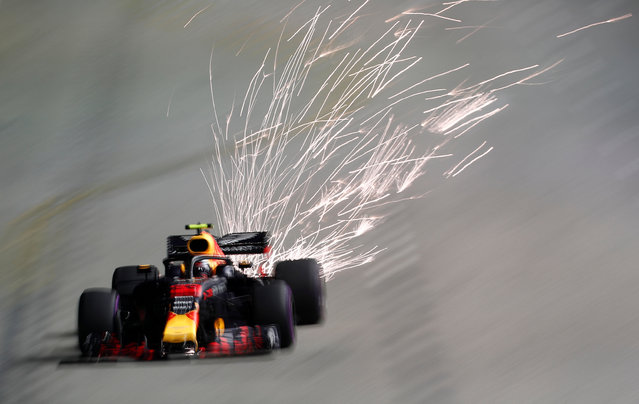 Red Bull' s Dutch driver Max Verstappen drives at the Marina Bay Street Circuit during the second practice session ahead of the Singapore Formula One Grand Prix in Singapore on September 14, 2018. (Photo by Edgar Su/Reuters) 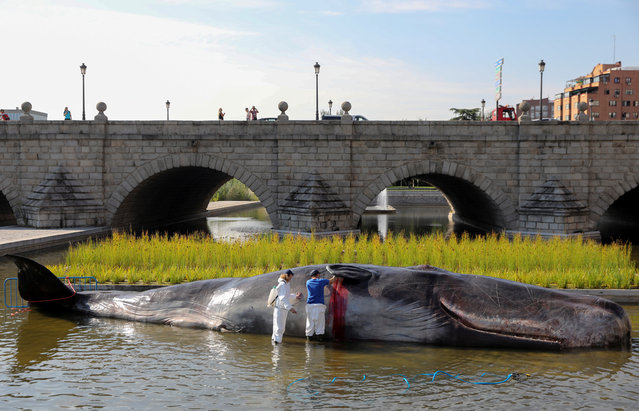 Artists perform a rescue simulation on a hiper realistic fibreglass art installation of a beached whale entitled “Whale” by Captian Boomer, a collective of Belgian artists, as part of an inaguration of the city's Fall Season cultural program in the Manaznares river in Madrid, Spain on September 14, 2018. (Photo by Sergio Perez/Reuters) 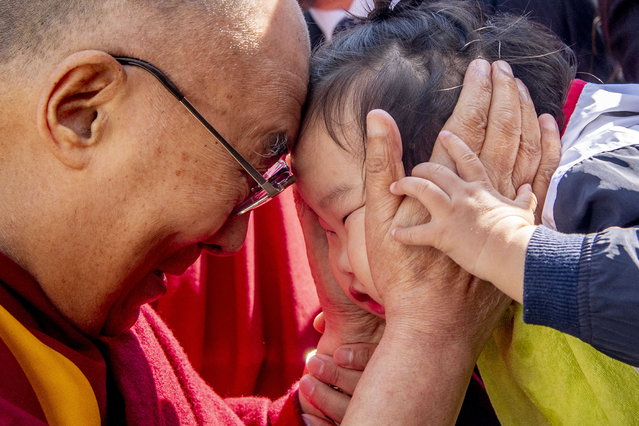 Tiibetan spiritual leader Dalai Lama greets a child as he meets with supporters after his arrival at the Bilderberg Parkhotel in Rotterdam, The Netherlands, 14 September 2018, where he will stay during his visit to the country. The 83-year-old Dalai Lama will be in the Netherlands for four days, before heading to Germany. (Photo by Robin Utrecht/EPA/EFE) 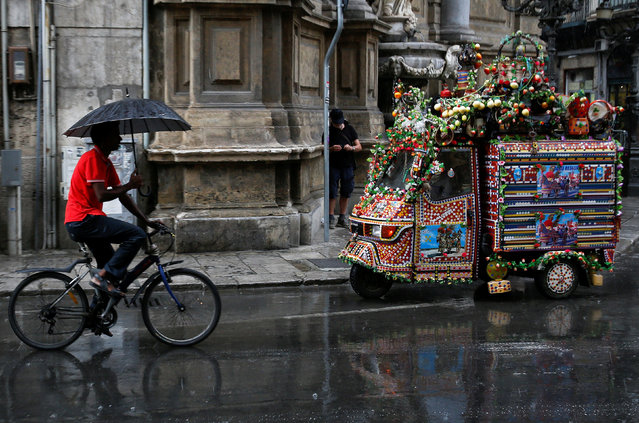 A man rides a bike in Palermo, Italy on September 14, 2018. (Photo by Tony Gentile/Reuters) 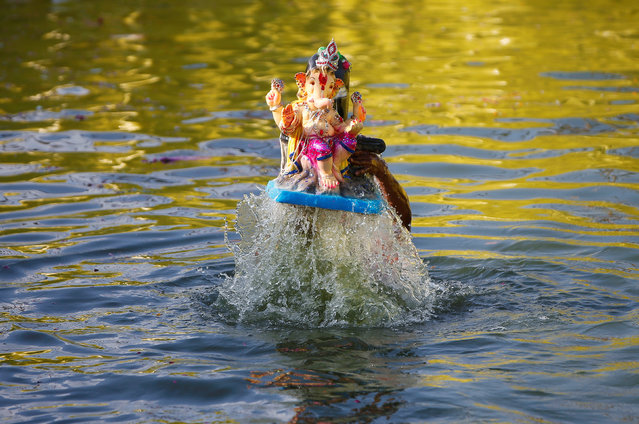 A devotee immerses an idol of the Hindu god Ganesh, the deity of prosperity, into a pond on the second day of the ten-day long Ganesh Chaturthi festival in Ahmedabad, India, September 14, 2018. (Photo by Amit Dave/Reuters) 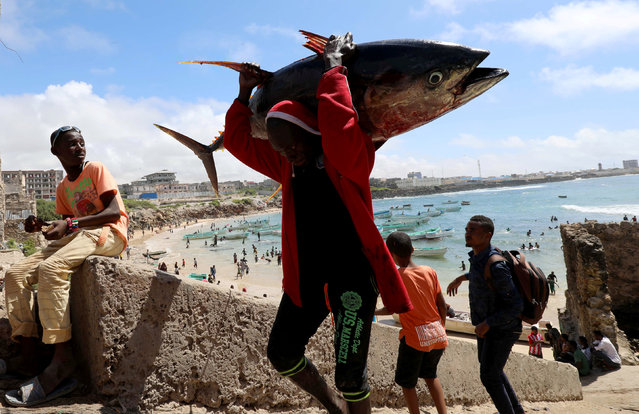 A fisherman carries his catch near a fishing port in Mogadishu, Somalia on September 14, 2018. (Photo by Feisal Omar/Reuters) 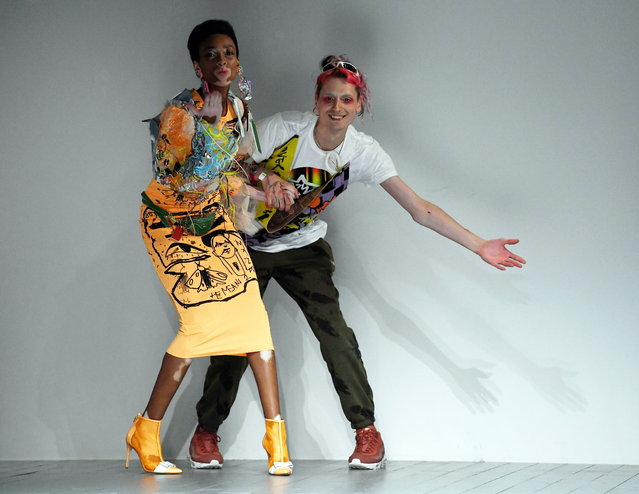 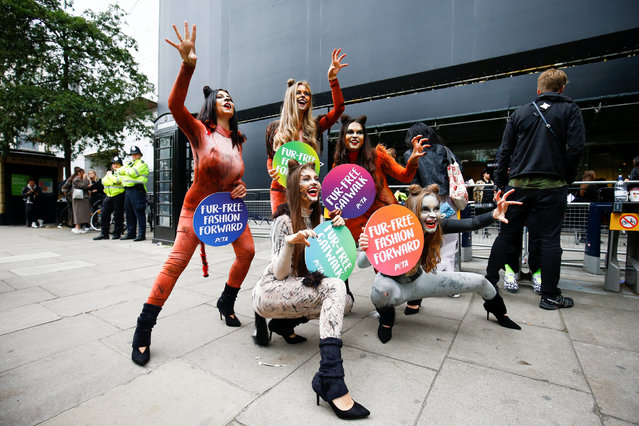 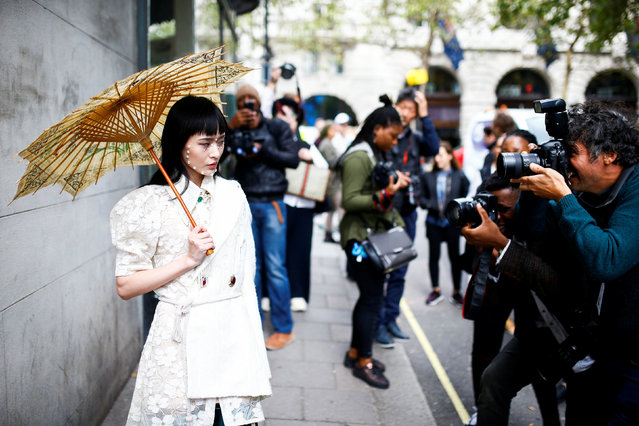 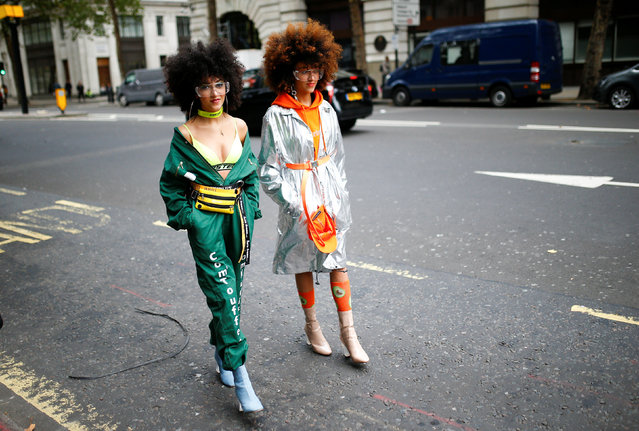 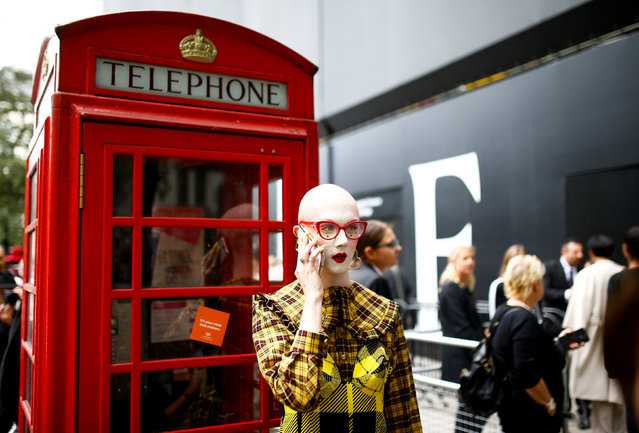