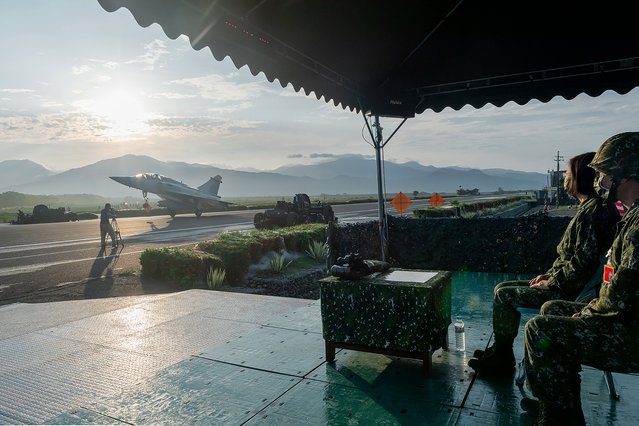 In this photo released by the Taiwan Presidential Office, Taiwanese President Tsai Ing-wen, second from right, watches as a military jet taxis along a highway in Jiadong, Taiwan, Wednesday, September 15, 2021. Four military aircraft landed on the highway and took off again on Wednesday as part of Taiwan's five-day Han Guang military exercise designed to prepare the island's forces for an attack by China, which claims Taiwan as part of its own territory. (Photo by Taiwan Presidential Office via AP Photo) 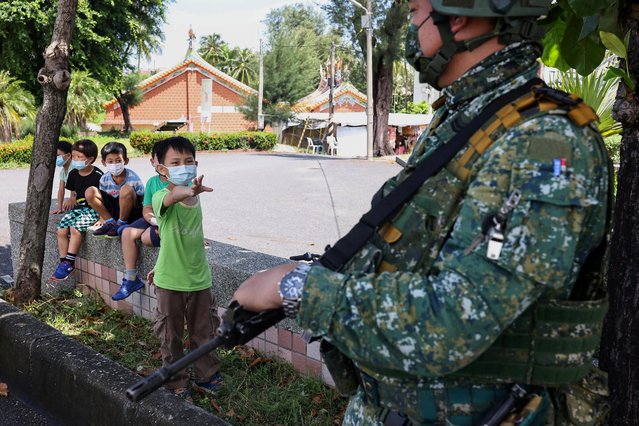 A student interacts with a soldier during the annual Han Kuang military drill in Tainan, Taiwan, September 14, 2021. (Photo by Ann Wang/Reuters) 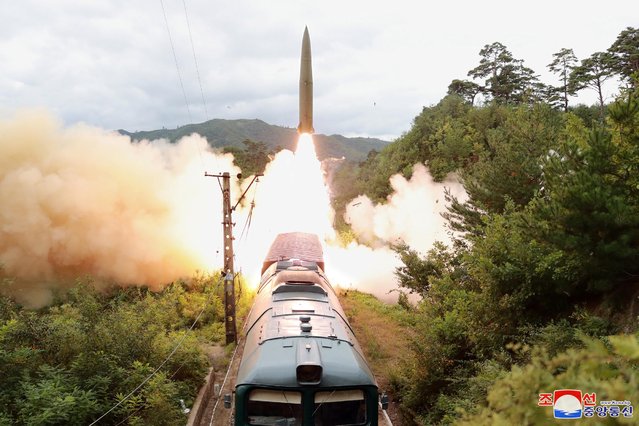 This photo provided by the North Korean government Thursday, September 16, 2021, shows a test missile is launched from a train on Sept. 15, 2021, in an undisclosed location of North Korea. North Korea says it succeeded in launching ballistic missiles from a train for the first time in part of continuing efforts to bolster its “war deterrence,” a day after the two Koreas tested-fired missiles hours apart. Independent journalists were not given access to cover the event depicted in this image distributed by the North Korean government. The content of this image is as provided and cannot be independently verified. Korean language watermark on image as provided by source reads: “KCNA” which is the abbreviation for Korean Central News Agency. (Photo by Korean Central News Agency/Korea News Service via Reuters) 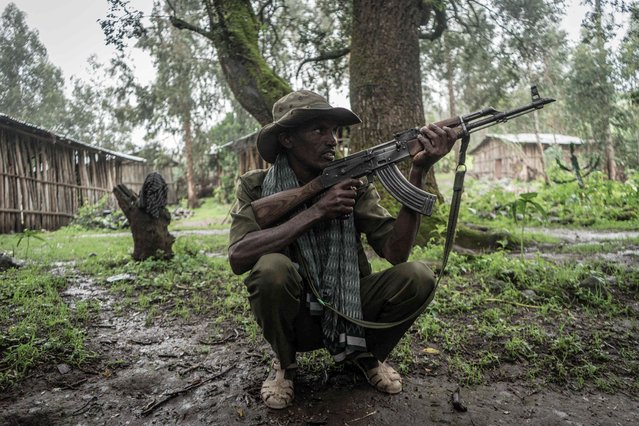 An Amhara militia member poses fro a photograph near the village of Chenna, 95 kilometres northeast of the city of Gondar, Ethiopia, on September 14, 2021. (Photo by Amanuel Sileshi/AFP Photo) 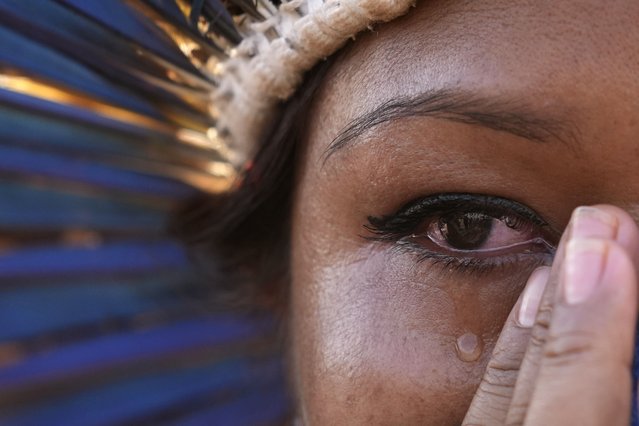 An Indigenous woman cries after the Supreme Court judges' decision to suspend the vote that defines the demarcation of Indigenous lands, during a protest in front of the Supreme Court building, in Brasilia, Brazil, Wednesday, September 15, 2021. (Photo by Eraldo Peres/AP Photo) 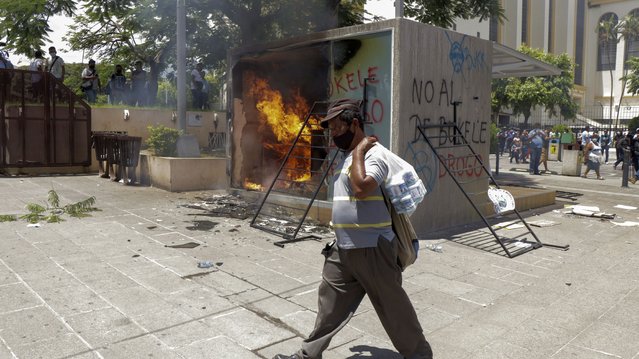 A Chivo digital wallet ATM, which exchanges cash for Bitcoin cryptocurrency, burns after being torched during a protest against President Nayib Bukele in San Salvador, El Salvador, Wednesday, September 15, 2021. Thousands marched against the government of President Bukele, centered on fears Bukele may try for re-election in 2024. (Photo by Ivan Manzano/AP Photo) 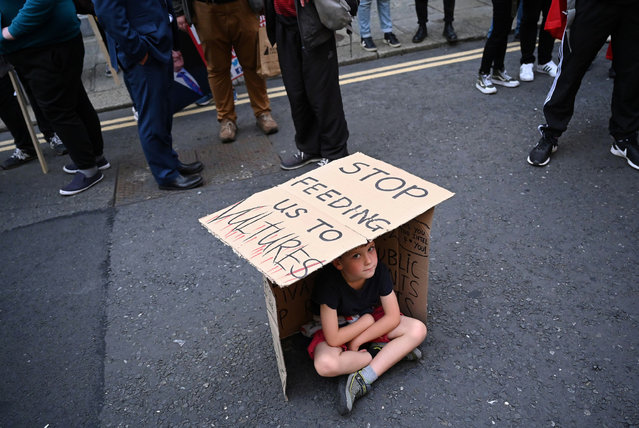 Patrick Rogerson, 6, sits inside a shelter he made from a sign reading “stop feeding us to vultures” during a protest against the rising cost of housing and rent at a rally called “Winter of Housing Discontent” in front of government buildings in Dublin, Ireland, September 15, 2021. (Photo by Clodagh Kilcoyne/Reuters) 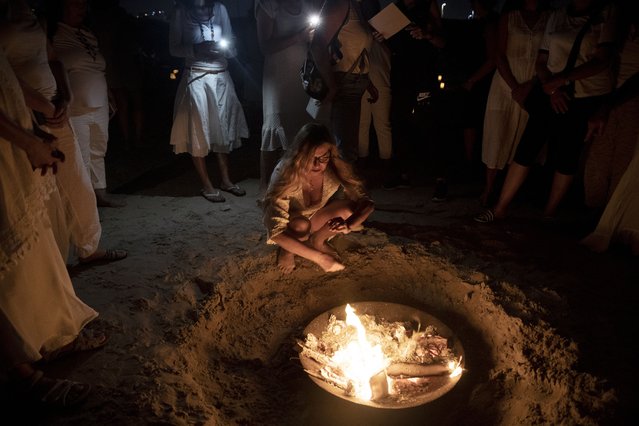 Women take part in a Tashlich ceremony, where they wrote down things they want to release before casting them into a fire, on the beach in Tel Aviv, Israel, Tuesday, September 14, 2021. Tashlich, which means 'to cast away' in Hebrew, is the practice by which Jews go to a large flowing body of water and symbolically 'throw away' their sins by throwing a piece of bread, or similar food, into the water before the Jewish holiday of Yom Kippur, the holiest day in the Jewish year which starts at sundown Wednesday. (Photo by Maya Alleruzzo/AP Photo) 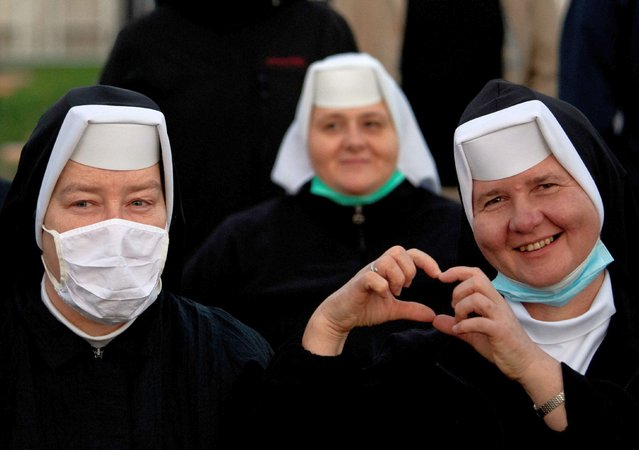 A nun forms a heart with her hands waiting with fellow worshippers at the site of the open air Holy Mass to be celebrated by Pope Francis at The National Shrine in Sastin-Straze, some 70 km norht of the Slovakian capital Bratislava on September 15, 2021. (Photo by Joe Klamar/AFP Photo) 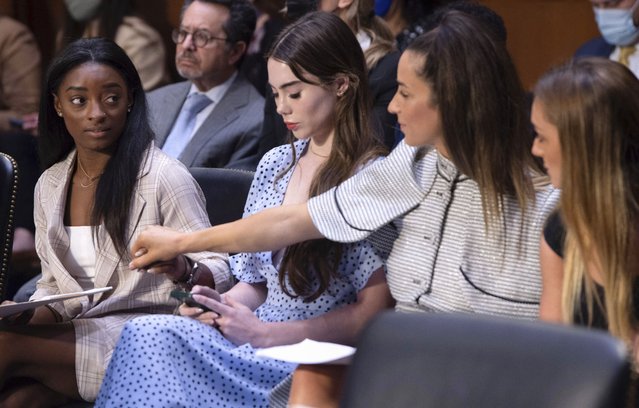 United States gymnasts from left, Simone Biles, McKayla Maroney, Aly Raisman and Maggie Nichols, arrive to testify during a Senate Judiciary hearing about the Inspector General's report on the FBI's handling of the Larry Nassar investigation on Capitol Hill, Wednesday, September 15, 2021, in Washington. Nassar was charged in 2016 with federal child p*rnography offenses and sexual abuse charges in Michigan. He is now serving decades in prison after hundreds of girls and women said he sexually abused them under the guise of medical treatment when he worked for Michigan State and Indiana-based USA Gymnastics, which trains Olympians. (Photo by Saul Loeb/Pool via AP Photo) 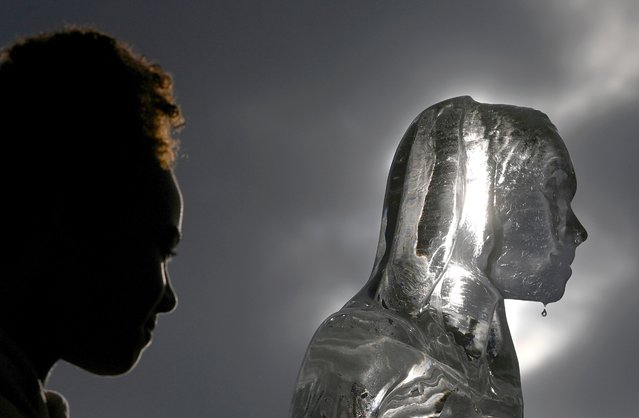 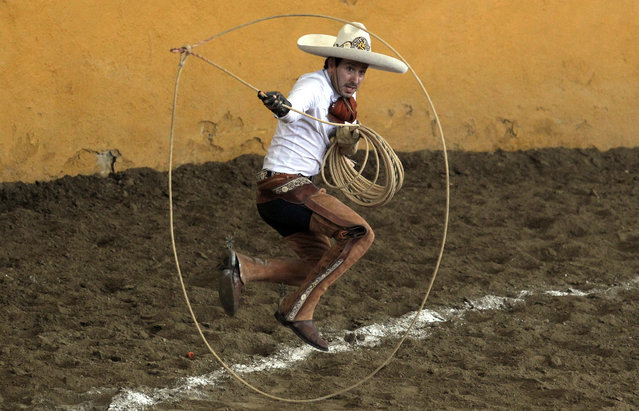 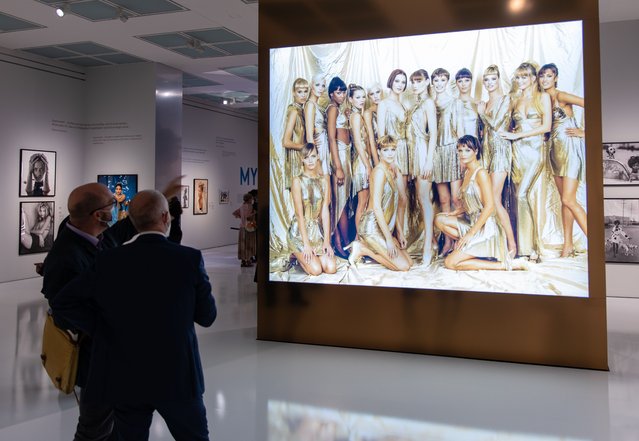 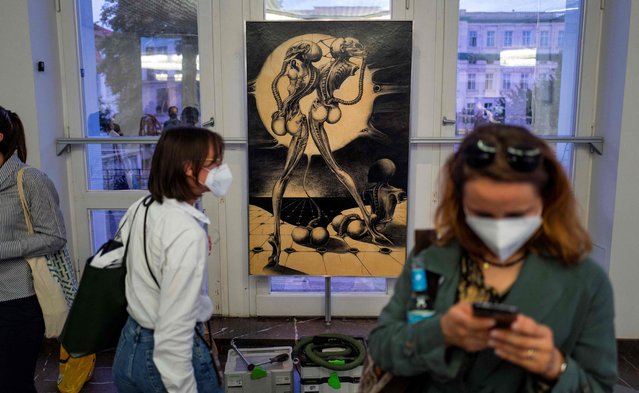 Swiss artist HR Giger's work “Atomkinder” is on display as part of the “HR Giger & Mire Lee” exhibition, at the Schinkel Pavillon gallery in Berlin, on September 15, 2021, during the Berlin Art Week. The Berlin Art Week, a yearly event that takes place from September 15-19, 2021, showcases contemporary art from all over the world, through events, exhibition openings, artist films and art fairs, spanning approximately 50 institutions, including established museums and independent galleries. (Photo by John MacDougall/AFP Photo) 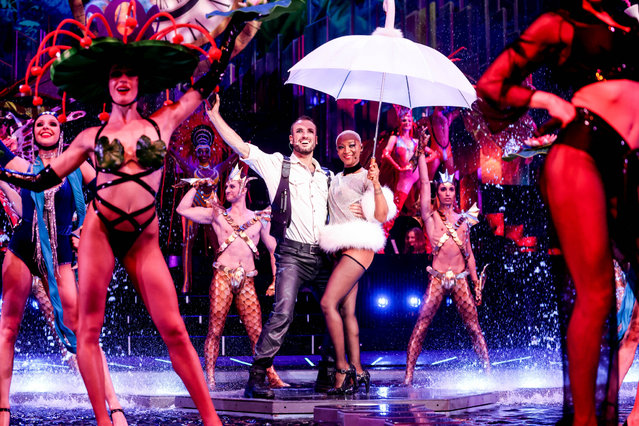 Actors and dancers perform during the press rehearsal for the “ARISE Grand Show” at the Friedrichstadt-Palast theater in Berlin, Germany, 15 September 2021. Premiere of the show is scheduled for 16 September and will amaze vistors with “extravagant costumes, breathtaking stage sets and artistic excellence” until February 2022 as the theater promises on its website. (Photo by Filip Singer/EPA/EFE) 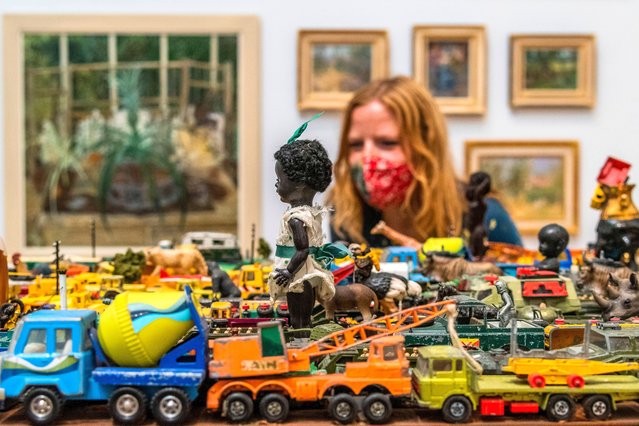 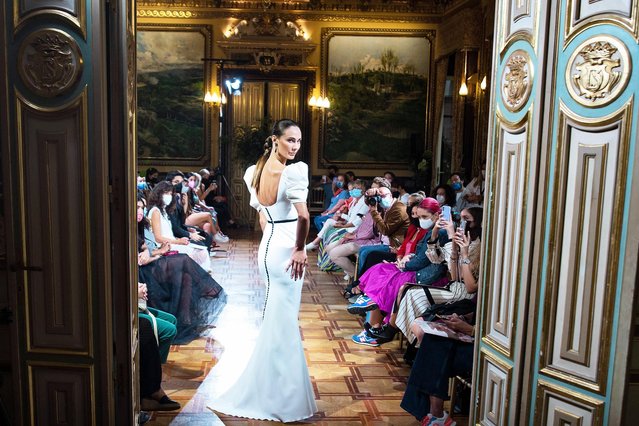