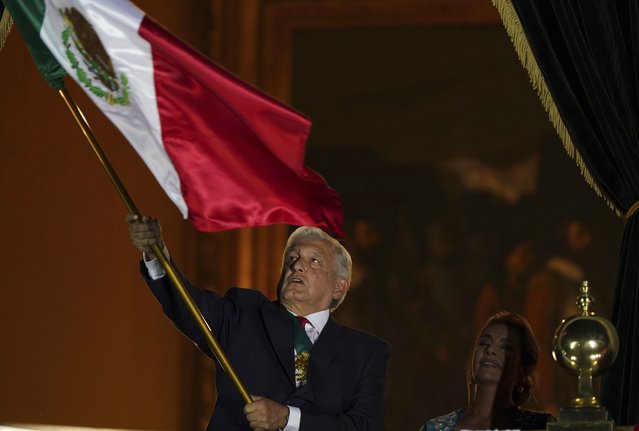 Mexican President Andres Manuel Lopez Obrador waves the national flag after giving the annual independence shout from the balcony of the National Palace to kick off subdued Independence Day celebrations amid the ongoing coronavirus pandemic, at the Zocalo in Mexico City, Wednesday, September 15, 2021. (Photo by Fernando Llano/AP Photo) Fireworks lit the sky over the Zocalo Square during the ceremony for the 211th anniversary of the “Cry of Independence” (El Grito) in Mexico City, Mexico, 15 September 2021, marking the start of Independence Day celebrations. Mexican President Andres Manuel Lopez Obrador re-enacted the “Cry of Independence” (El Grito) for the second consecutive year without the presence of citizens in the Zocalo in central Mexico City due to the COVID-19 pandemic. (Photo by Mario Guzman/EPA/EFE) 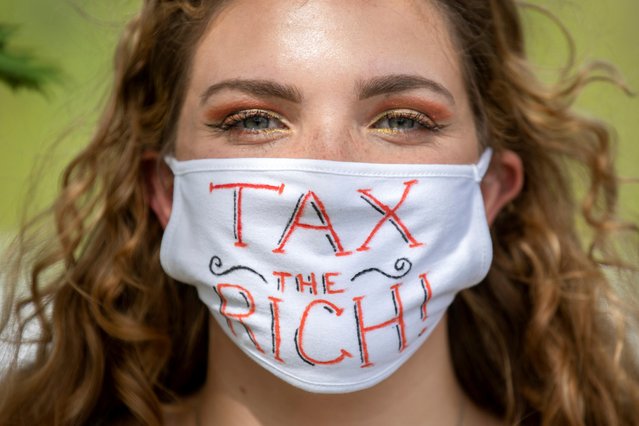 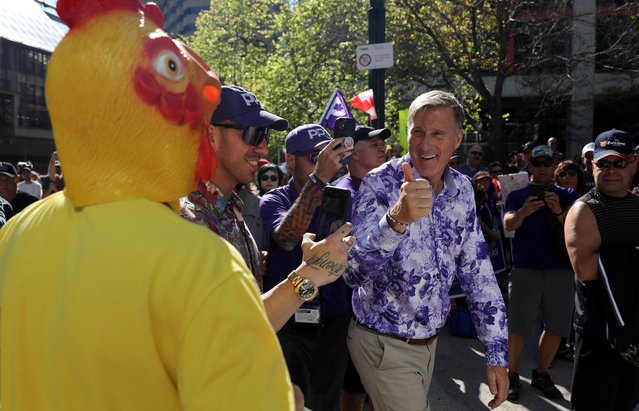 People's Party of Canada (PPC) leader Maxime Bernier gives a thumbs up to man in a rubber chicken outfit during a protest rally outside the Canadian Broadcasting Corporation (CBC) headquarters ahead of a federal election in Toronto, Ontario, Canada on September 16, 2021. (Photo by Chris Helgren/Reuters) 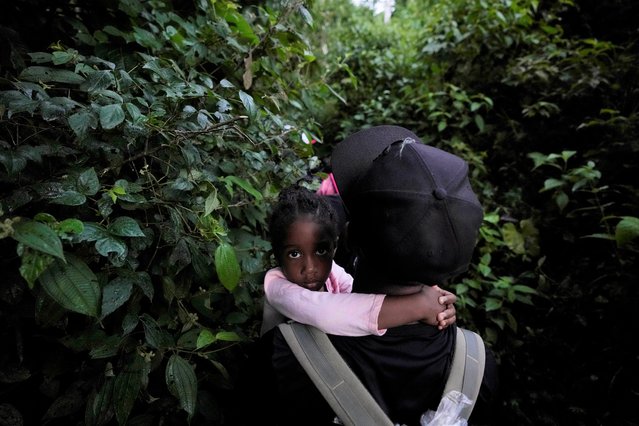 Migrants continue on their trek north, near Acandi, Colombia, Wednesday, September 15, 2021. The migrants, mostly Haitians, are on their way to crossing the Darien Gap from Colombia into Panama dreaming of reaching the U.S. (Photo by Fernando Vergara/AP Photo) 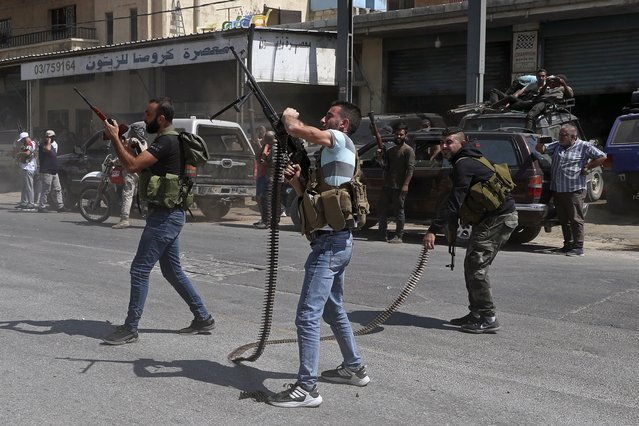 Hezbollah supporters fire in the air to celebrate the arrival of Iranian fuel tankers to Lebanon, in the eastern town of Baalbek, Lebanon, Thursday, September 16, 2021. The delivery violates US sanctions imposed on Tehran after former President Donald Trump pulled America out of a nuclear deal between Iran and world powers three years ago. (Photo by Bilal Hussein/AP Photo) 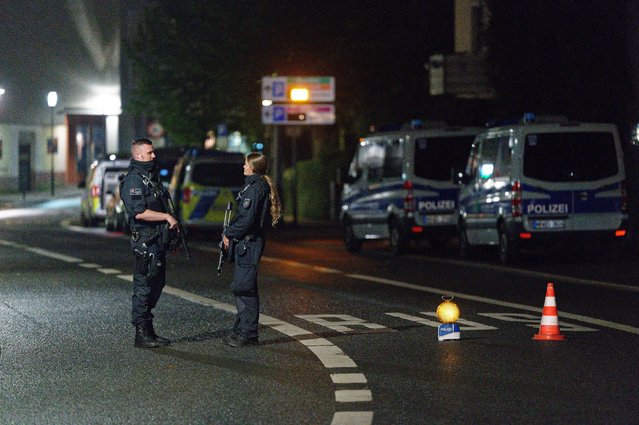 Police officers block a street in the city center during a police operation protecting the Jewish Community building in Hagen, Germany, Thursday, September 16, 2021. Numerous police officers were involved in the operation, the police spoke of indications of a possible dangerous situation. (Photo by Henning Kaiser/dpa via AP Photo) 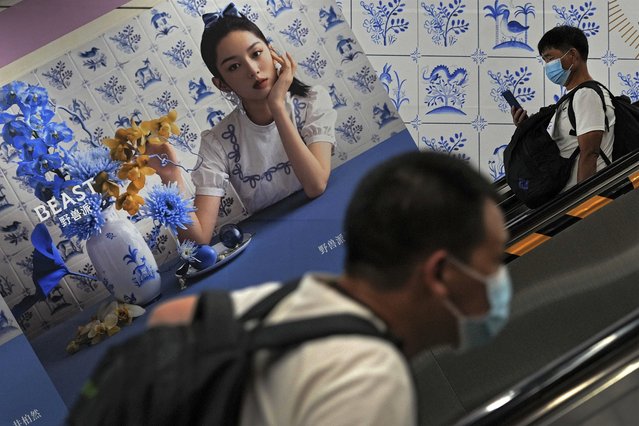 Commuters wearing face masks to help curb the spread of the coronavirus ride on an escalator past by an advertisement at a subway station in Beijing, Thursday, September 16, 2021. China on Thursday reported several dozen additional locally-transmitted cases of coronavirus as it works to contain an outbreak in the eastern province of Fujian. (Photo by Andy Wong/AP Photo) A woman shows the number three as she receives the third shot of Pfizer's Comirnaty vaccine, Thursday, September 16, 2021, at the Eastman clinic in Rome. (Photo by Alessandra Tarantino/AP Photo) 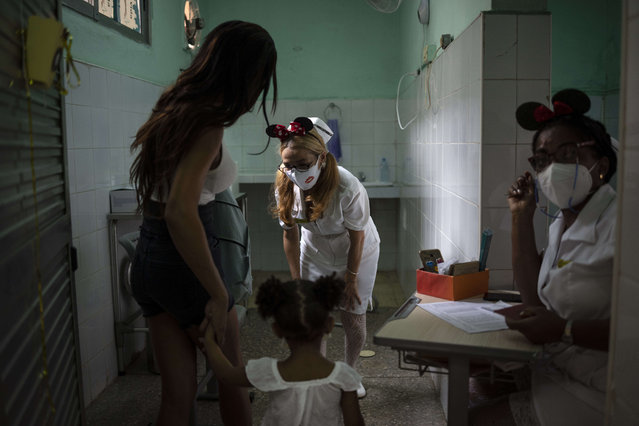 A nurse greets a young girl as she arrives with her mother to receive a dose of the Soberana-02 COVID-19 vaccine, in Havana, Cuba, Thursday, September 16, 2021. Cuba began inoculating children as young as 2-years-old with locally developed vaccines on Thursday. (Photo by Ramon Espinosa/AP Photo) 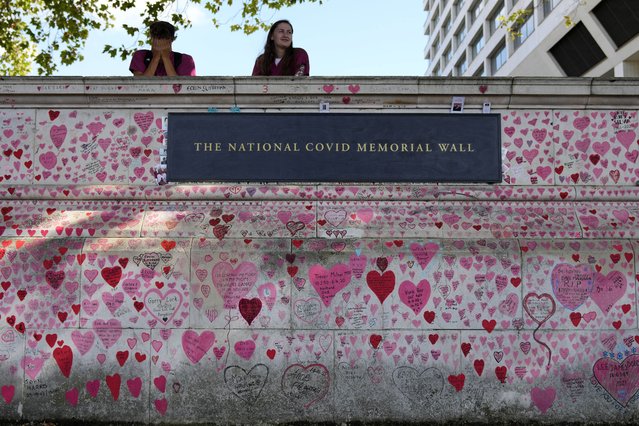 Nurses from the nearby hospital rest atop the National Covid Memory Wall in London, Thursday, September 16, 2021. Although the number of people now contracting COVID-19 is way higher than this time last year – over 30,000 new infections a day – the British government has opted not to re-introduce further virus restrictions for England, as the vaccine drive this year has reduced the number of people requiring treatment for COVID-19 and subsequently dying. (Photo by Frank Augstein/AP Photo) 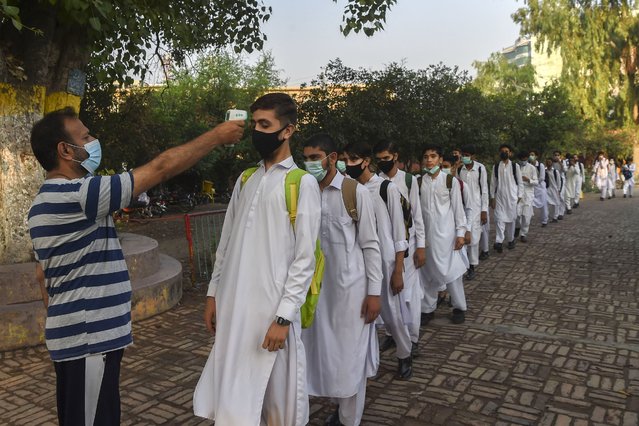 A teacher checks the body temperature of a student as others stand in queue upon their arrival at a school in Peshawar on September 16, 2021, after the government reopened educational institutes that were closed as a preventive measure to curb the spread of the Covid-19 coronavirus. (Photo by Abdul Majeed/AFP Photo) 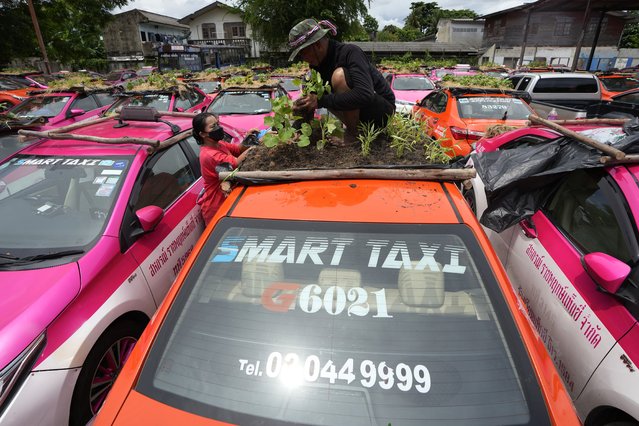 Workers from two taxi cooperatives assemble miniature gardens on the rooftops of unused taxis parked in Bangkok, Thailand, Thursday, September 16, 2021. Taxi fleets in Thailand are giving new meaning to the term “rooftop garden”, as they utilize the roofs of cabs idled by the coronavirus crisis to serve as small vegetable plots and raise awareness about the plight of out of work drivers. (Photo by Sakchai Lalit/AP Photo) 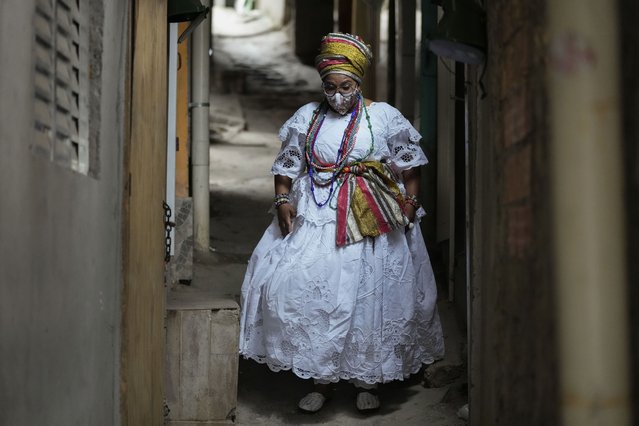 Street food vendor Mila Veloso walks through an alley in the Paraisopolis favela, during the community's centennial celebration, in Sao Paulo, Brazil, Thursday, September 16, 2021. One of the largest favela's in Brazil, home to tens of thousands of residents in the country's largest and wealthiest city, Paraisopolis is grappling with crime and a pandemic that have challenged daily life for many who live there, but organizers say its people have built a vibrant community and are launching a 10-day celebration of its achievements. (Photo by Andre Penner/AP Photo) 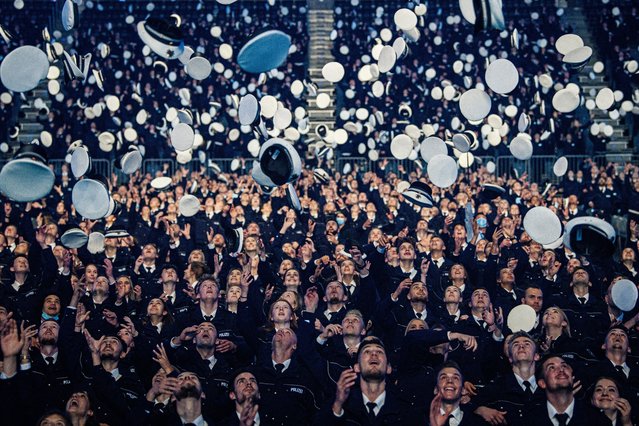 Newly-graduated police cadets attend a ceremony to take their oath of service in the Lanxess Arena on September 16, 2021 in Cologne, Germany. Approximately 2,750 cadets from both 2020 and 2019, who have been combined today due to the cancellation of the event last year because of the coronavirus pandemic, will be joining the state police force of North Rhine-Westphalia. (Photo by Lukas Schulze/Getty Images) 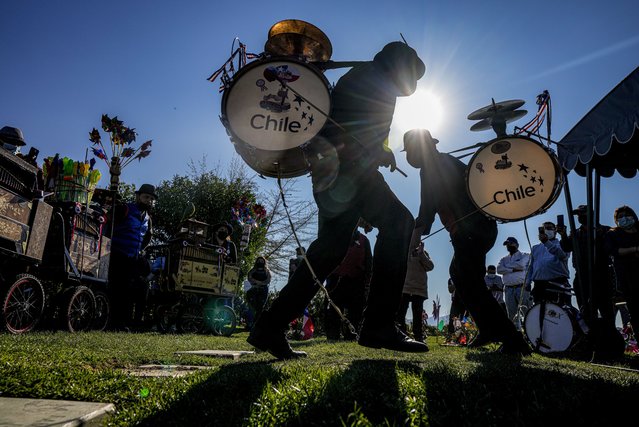 Traditional dancers, and the family of late organ grinder and ¨Chinchinero¨ Hector Lizana, 93, who died from COVID-19 three weeks after his son Manuel also succumbed to COVID-19, dance during his funeral at a cemetery in Santiago, Chile, Wednesday, September 15, 2021. A Chinchinero is an urban street performer in Chile, who plays a bass drum-type percussion instrument with long drumsticks strapped to his back which also involves a rope with a noose tied around the performer's foot to play the cymbals which also form part of this improvised instrument. (Photo by Esteban Felix/AP Photo) 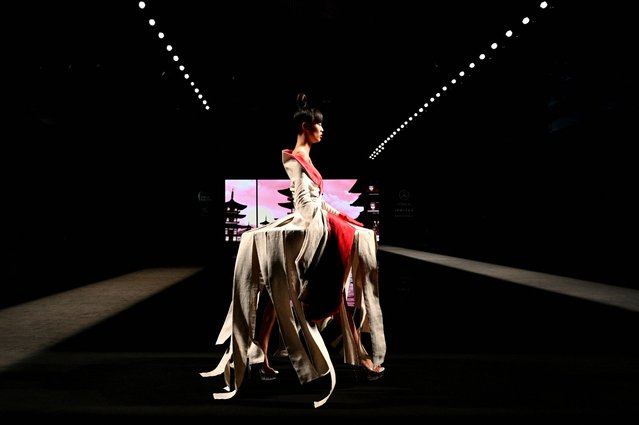 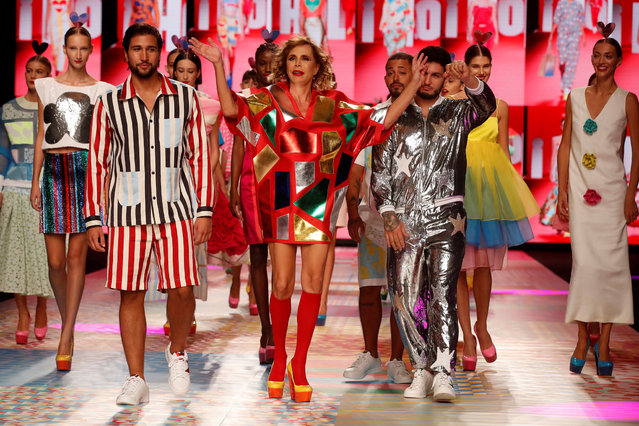 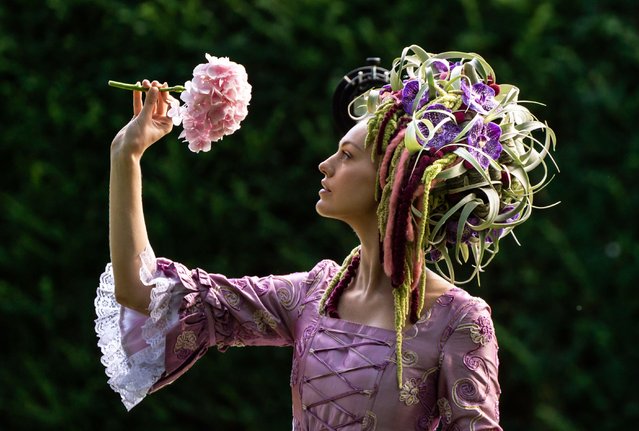