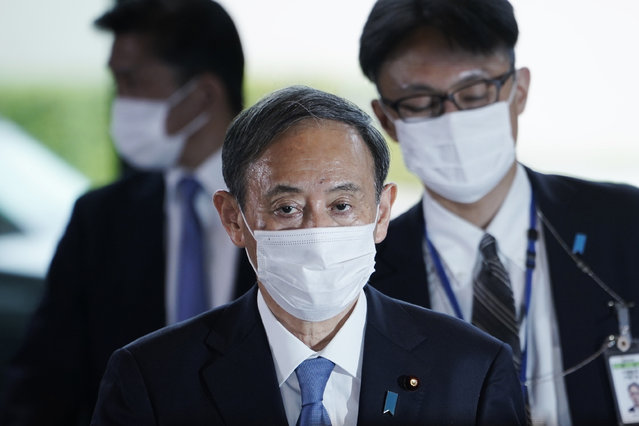 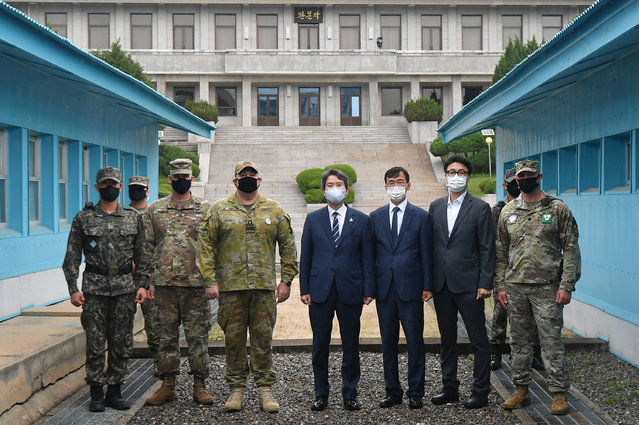 South Korean Unification Minister Lee In-young (C) and officials pose with U.S. and South Korean army soldiers at the military demarcation line during a visit to Panmunjom between South and North Korea in the demilitarized zone (DMZ) on September 16, 2020 in Panmunjom, South Korea. Unification Minister Lee In-young visit the truce village of Panmunjom for the first time since taking office, raising expectations he could send a message to North Korea amid stalled cross-border exchanges and cooperation. (Photo by Park Tae-hyun-Korea – Pool/Getty Images) A girl waits to fill bottles with water near a temporary migrant camp on the Greek Aegean island of Lesbos on September 16, 2020, after the Moria camp was destroyed by a fire on the night of September 8. Six young Afghan men including two minors will face a prosecutor on Greece's Lesbos island on September 16 on suspicion of setting fires that destroyed Europe's largest migrant camp, leaving over 12,000 people homeless. (Photo by Angelos Tzortzinis/AFP Photo) 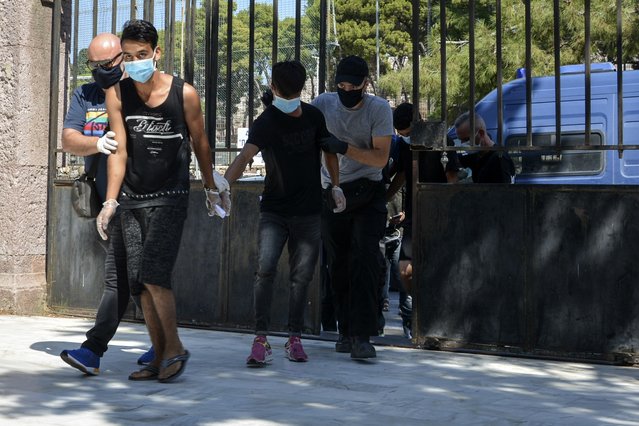 Suspects, all from Afghanistan escorted by plain clothes policemen and wearing face masks, arrive at a court in Mytilene, the capital of the northeastern Aegean island of Lesbos, Greece, Wednesday, September 16, 2020. The government says the fires in Moria refugee camp were set deliberately by the Afghan migrants protesting a coronavirus lockdown, and authorities on Tuesday announced the arrests of six suspect, include two 17-year-olds, in the case. (Photo by Panagiotis Balaskas/AP Photo) 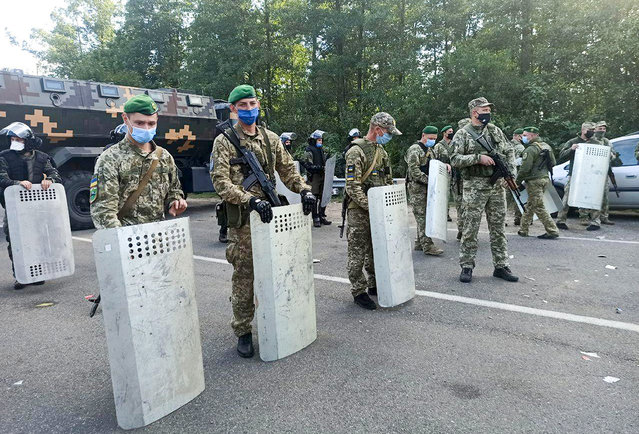 Ukrainian border guards block the road on the Belarus-Ukraine border, in Belarus, Tuesday, September 15, 2020. About 700 Jewish pilgrims are stuck on Belarus' border due to coroavirus restrictions that bar them from entering Ukraine. Thousands of pilgrims visit the city each September for Rosh Hashana, the Jewish new year. However, Ukraine closed its borders in late August amid a surge in COVID-19 infections. (Photo by TUT.by via AP Photo) 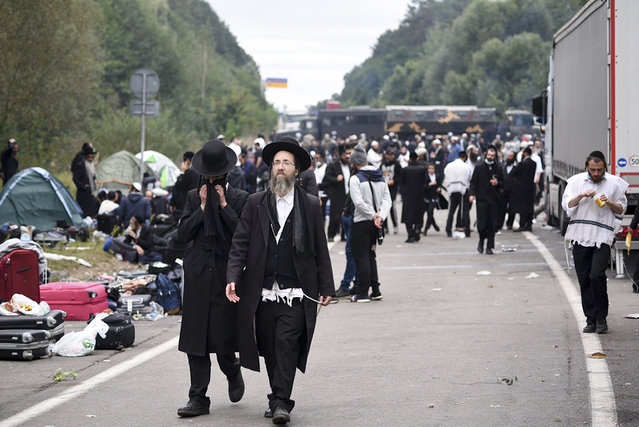 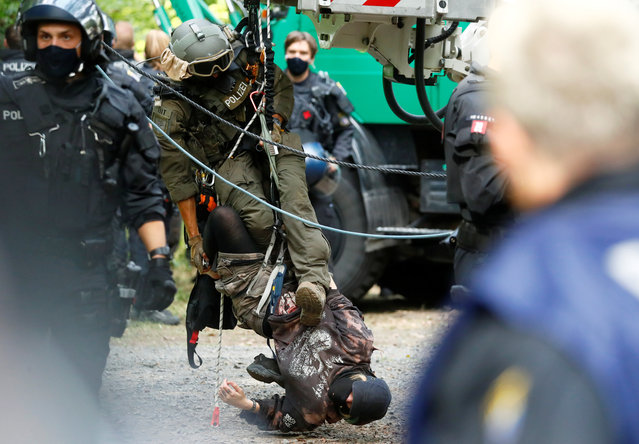 A police special forces officer brings down a protester staging a blockade as the police and forest workers clear a camp at the Dannenrod forest during a protest of environmentalists against the extension of the highway Autobahn 49, in Dannenrod, Germany on September 16, 2020. (Photo by Kai Pfaffenbach/Reuters) 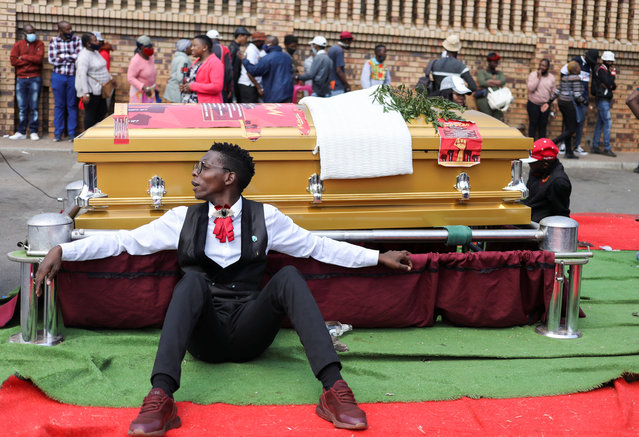 A striking funeral worker takes a break near a casket placed at a parking lot as they protest over changes to a host of procedures and regulations, during the coronavirus disease (COVID-19) outbreak outside the department of home affairs in Soweto, South Africa, September 16, 2020. (Photo by Siphiwe Sibeko/Reuters) 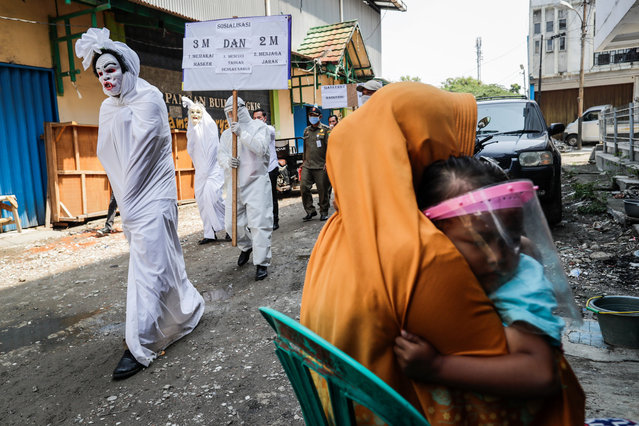 Officials dressed up as “pocong” or shroud ghosts march during a COVID-19 awareness campaign at a market in Tangerang, outskirt of Jakarta, Indonesia, 16 September 2020. Indonesia has recorded over 200,000 cases of COVID-19 since the pandemic started, with nearly 9,000 deaths, the highest number in Southeast Asia. (Photo by Mast Irham/EPA/EFE) 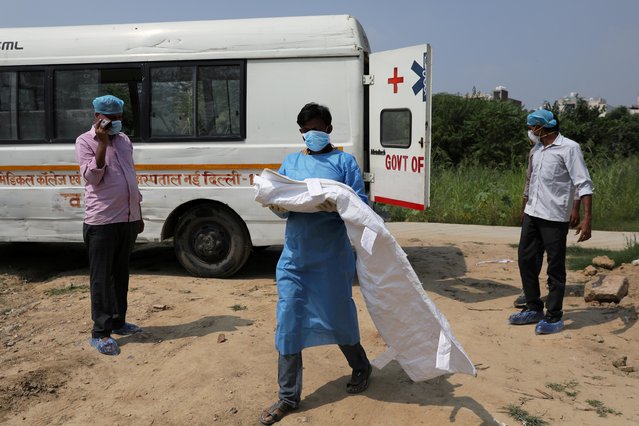 A man wearing a personal protective equipment (PPE) carries his three-month-old baby who died of COVID-19, during his funeral at a graveyard, in New Delhi, India, September 16, 2020. (Photo by Anushree Fadnavis/Reuters) 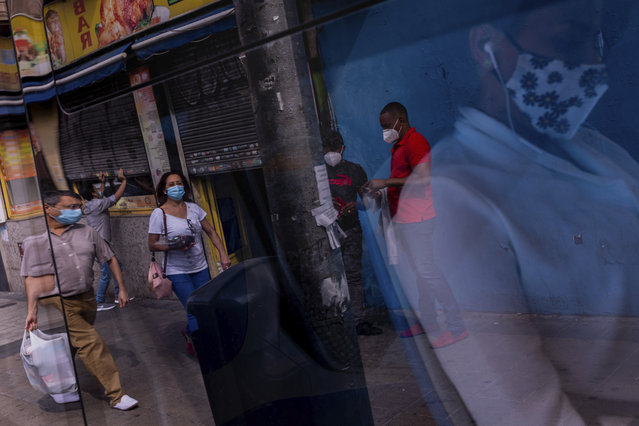 Pedestrians wear face masks to prevent the spread of coronavirus in the southern neighborhood of Vallecas in Madrid, Spain, Wednesday, September 16, 2020. The Spanish capital will introduce selective lockdowns in urban areas where the coronavirus is spreading faster, regional health authorities announced on Tuesday. The measures in Madrid will most likely affect southern, working-class neighborhoods where virus contagion rates have been steadily soaring since August. (Photo by Bernat Armangue/AP Photo) 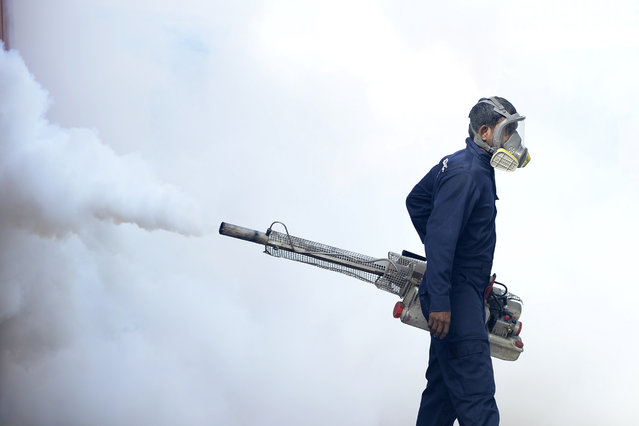 A municipal worker fumigates an area to kill off mosquitos inside the Lumbini school in Colombo on September 15, 2020. (Photo by Lakruwan Wanniarachchi/AFP Photo) 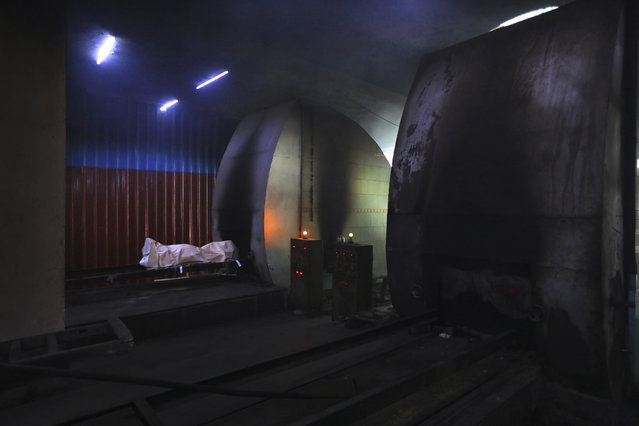 The body of a COVID-19 victim is placed for cremation in New Delhi, India, Wednesday, September 16, 2020. India is now second in the world with the number of reported coronavirus infections with over 5.1 million cases, behind only the United States. Its death toll of only 83,000 in a country of 1.3 billion people, however, is raising questions about the way it counts fatalities from COVID-19. (Photo by Manish Swarup/AP Photo) 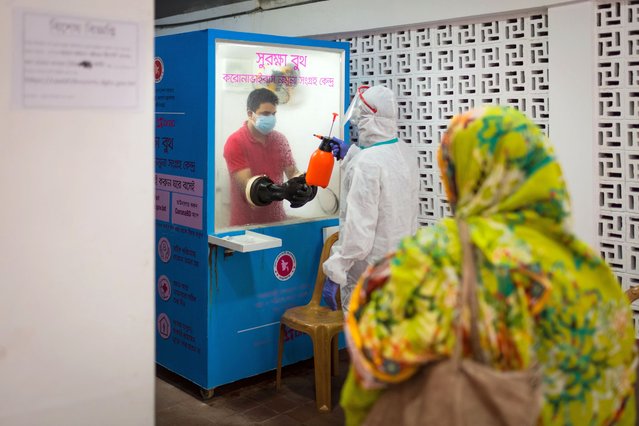 A woman is waiting in front of a COVID 19 test sample collection booth while medical employees are preparing the booth and disinfecting the area in Dhaka, Bangladesh, on September 15, 202. Bangladesh confirmed cases of COVID- 19 is 339,332 and death 4759 on September 15, 2020. (Photo by Istiak Karim/NurPhoto via Getty Images) 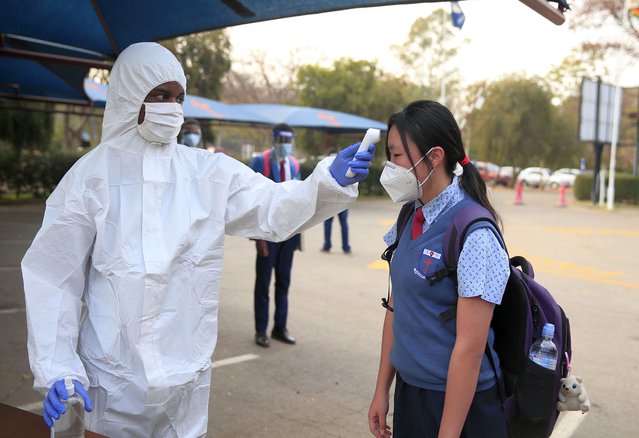 A medical worker checks the temperature of a student at Gateway Secondary school in Harare, Zimbabwe, on September 15, 2020. Zimbabwe has opened up most of its sectors including industry, commercial, aviation and tourism after months of closure due to the lockdown. In the education sector, only examination classes have been given the nod to reopen. (Photo by Shaun Jusa/Xinhua News Agency) 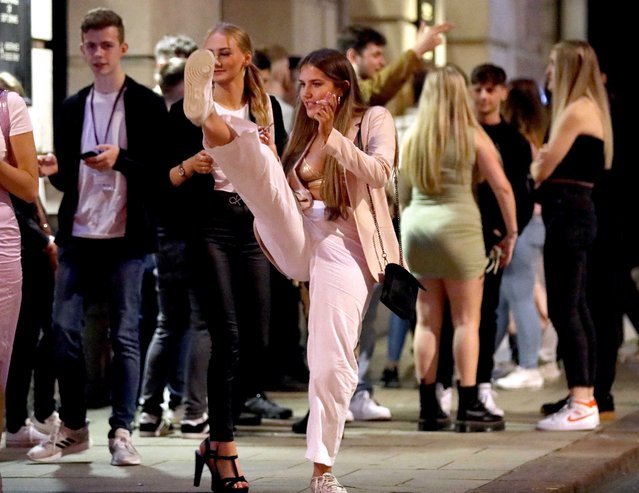 Students arrived the town for a boozy night in Leeds in northern English county of Yorkshire on September 16, 2020 to have time to have fun, as tightening restrictions on coronavirus will be tightenedю (Photo by NB PRESS LTD/The Sun)
Edit Del
18 Sep 2020 00:07:00, post received 0 comments
Publication archive:
←   →
Popular tags:
All tags
Last searches: