Smoke billows from a wildfire near the town of Almonaster la Real in Huelva, Spain on August 30, 2020. At least 3,200 people were evacuated because of a fire that has already ravaged some 10,000 hectares in the southwestern Spanish province of Huelva and which remains active, according to local authorities. (Photo by A. Perez/AP Photo) 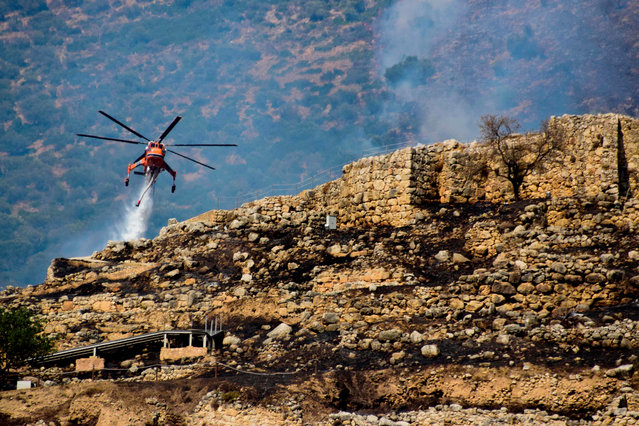 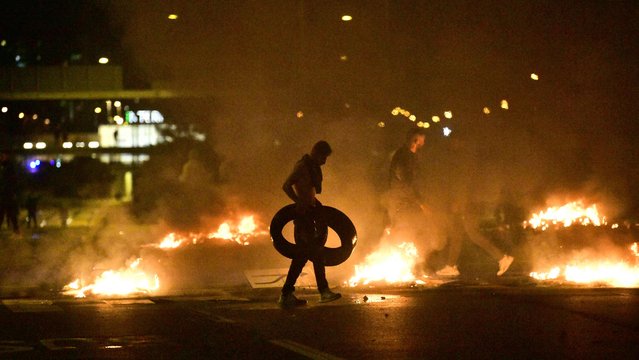 Demonstrators burn tyres during clashes with police in the Rosengard neighbourhood of Malmo, Sweden, on August 28, 2020. The protest was sparked by the burning of a coran by members of Danish far-right party Stram Kurs during an anti-Muslim rally in Malmo earlier in the day. The party's leader Rasmus Paludan, known for his anti-Muslim rhetoric, was due to attend the rally but he was arrested near Malmo and has been banned from Sweden for two years, authorities said on August 28. (Photo by TT News Agency via AFP Photo) 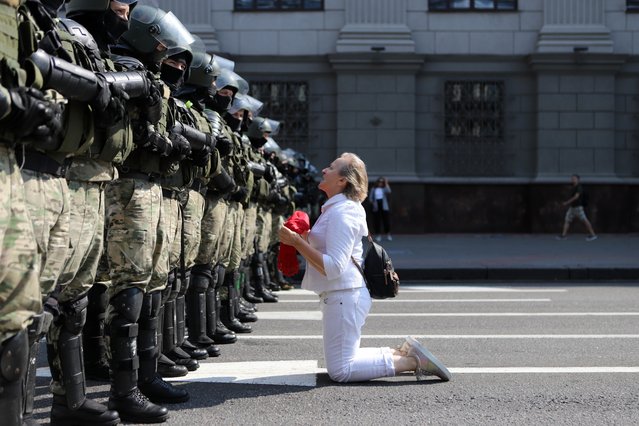 A woman kneels in front of a riot police line as they block Belarusian opposition supporters rally in the center of Minsk, Belarus, Sunday, August 30, 2020. Opposition supporters whose protests have convulsed the country for two weeks aim to hold a march in the capital of Belarus. (Photo by AP Photo/Stringer) 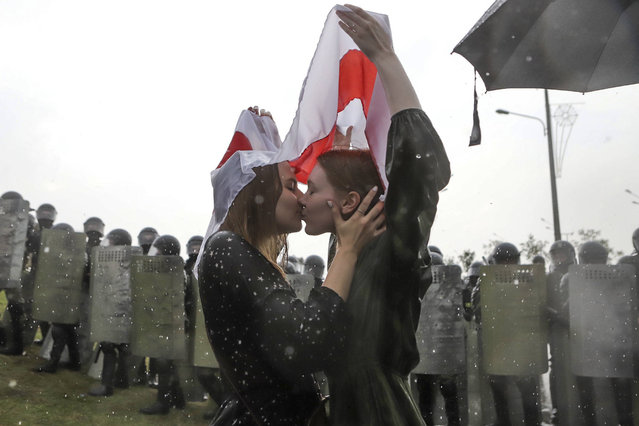 Two women kiss covered by an old Belarusian national flag as Belarusian opposition supporters gather towards the Independence Palace in Minsk, Belarus, Sunday, August 30, 2020. Tens of thousands of demonstrators have gathered in the capital of Belarus, beginning the fourth week of daily protests demanding that the country's authoritarian president resign. The protests began after an Aug. 9 presidential election that protesters say was rigged and officials say gave President Alexander Lukashenko a sixth term in office. (Photo by AP Photo/Stringer) 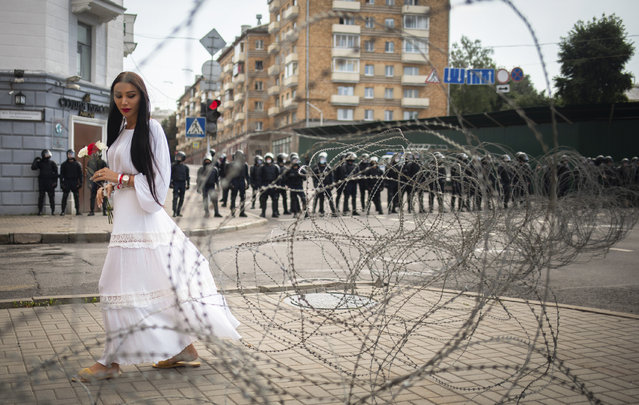 A woman walks past the barbed wire separating Belarusian servicemen and Belarusian opposition supporters during a rally in Minsk, Belarus, Sunday, August 30, 2020. Tens of thousands of demonstrators have gathered in the capital of Belarus, beginning the fourth week of daily protests demanding that the country's authoritarian president resign. The protests began after an Aug. 9 presidential election that protesters say was rigged and officials say gave President Alexander Lukashenko a sixth term in office. (Photo by Tut.By via AP Photo) 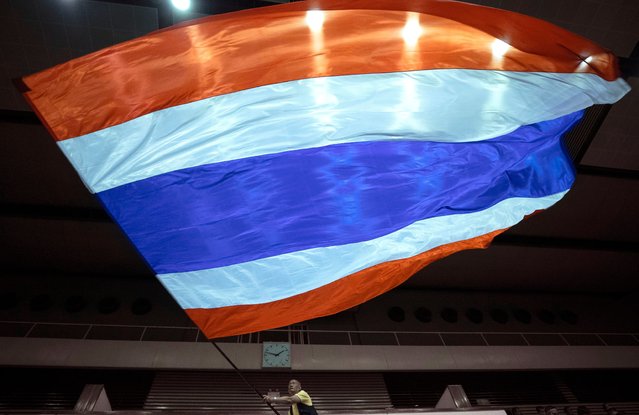 A supporter of the Thai monarchy waves a giant national flag during a rally in Bangkok, Thailand, Sunday August 30, 2020. Royalists led by a group calling itself “Loyal Thai”, have begun organizing to the defend the monarchy in a response to recent student-led pro-democracy protests, some of which have included criticism of the royal institution. (Photo by Sakchai Lalit/AP Photo) 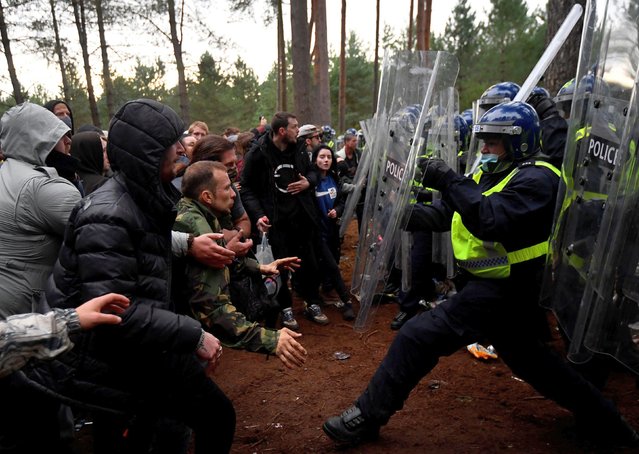 Revellers clash with riot police at the scene of a suspected illegal rave in Thetford Forest, in Norfolk, Britain, August 30, 2020. (Photo by Toby Melville/Reuters) 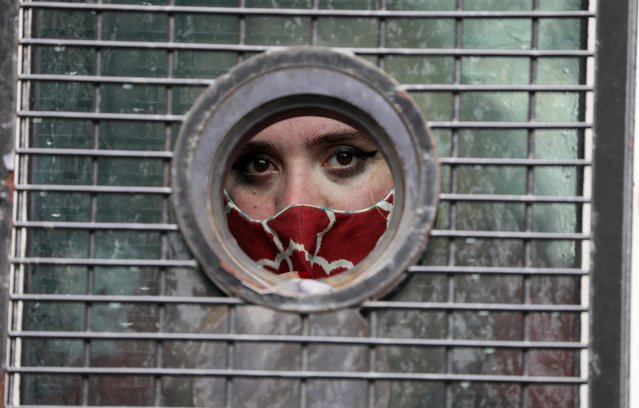 A woman is seen through the window of a police van after being detained during a protest against gender based violence outside the parliament in Cape Town, South Africa, August 29, 2020. (Photo by Sumaya Hisham/Reuters) 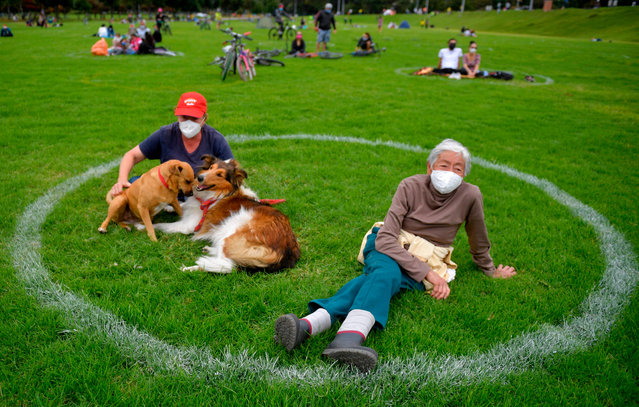 Locals enjoy the reopening of the parks, following the ease of measures imposed by Bogota's Mayor and the Colombian Goverment within the COVID-19 coronavirus pandemic, at Simon Bolivar park in Bogota on August 30, 2020. (Photo by Raul Arboleda/AFP Photo) 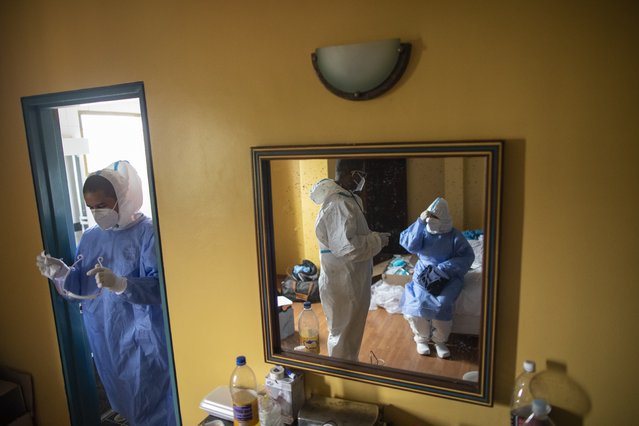 Venezuelan doctors speak in one of their rooms before going out to check on asymptomatic COVID-19 patients quarantining at a hotel in Caracas, Venezuela, Sunday, August 30, 2020. (Photo by Ariana Cubillos/AP Photo) 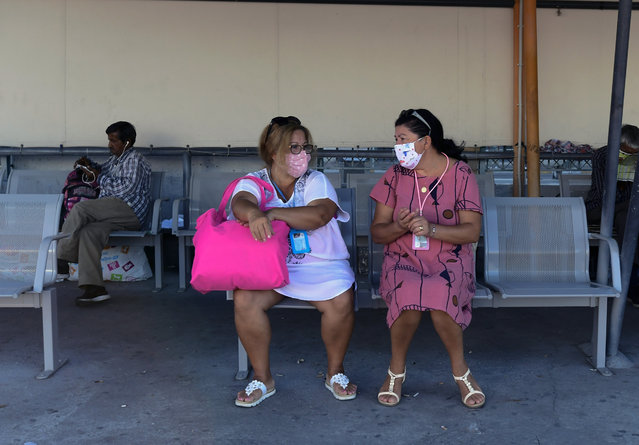 Two women wearing face masks to protect against the spread of the new coronavirus, sit on a bench at the port of Piraeus, near Athens, Sunday, August 30, 2020 Greek health officials said Friday that they are expanding for another two weeks a series of domestic health measures, including the obligatory use of masks in most indoors public areas, distancing on beaches and a ban on large gatherings on the occasion of religious festivals. (Photo by Michael Varaklas/AP Photo) 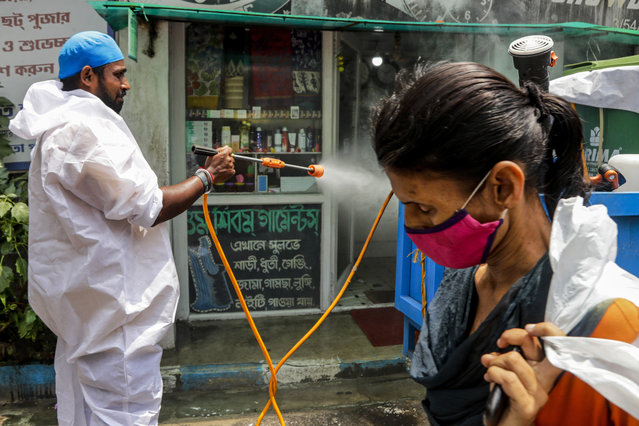 A civic worker sprays sanitizers in front of a shop as a woman wearing face mask walks past in Kolkata, India, Sunday, August 30, 2020. India has the third-highest coronavirus caseload after the United States and Brazil, and the fourth-highest death toll in the world. (Photo by Bikas Das/AP Photo) 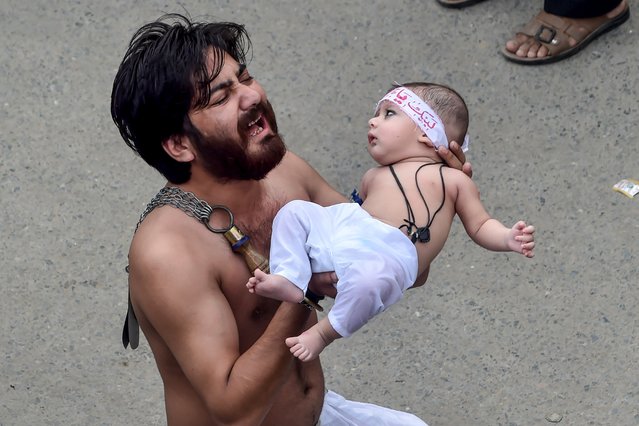 A Shiite Muslim holds his son before starting flagellating himself for an Ashura procession during the month of Muharram in Lahore on August 30, 2020. Ashura is a period of mourning for Shiite Muslims during Muharram commemorations to mark the seven-century martyrdom of Prophet Mohammad's grandson Imam Hussein who was killed in battle in Karbala in Iraq 680 AD. (Photo by Arif Ali/AFP Photo) 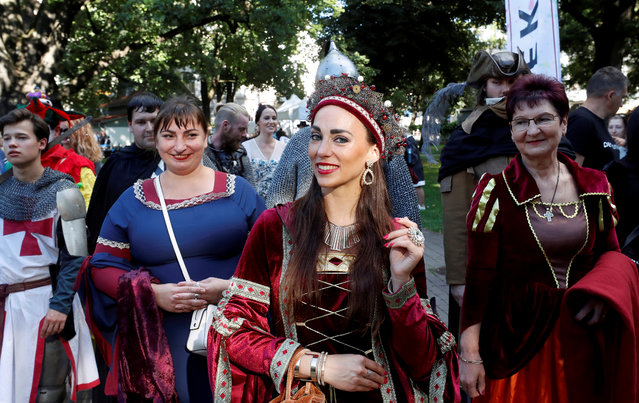 Participants in colorful costumes parade as they take part in the IX International multicultural festival called “Count of May 2020” at the Vermanes Garden Park in Riga, Latvia, 30 August 2020. The “Count of May” is a unique spring carnival that dates back to a 15th century tradition that nowadays became a family event featuring costumes from various eras and cultural regions with even a competition for the best costumes to elect the “Count and Countess of May”. (Photo by Toms Kalnins/EPA/EFE) 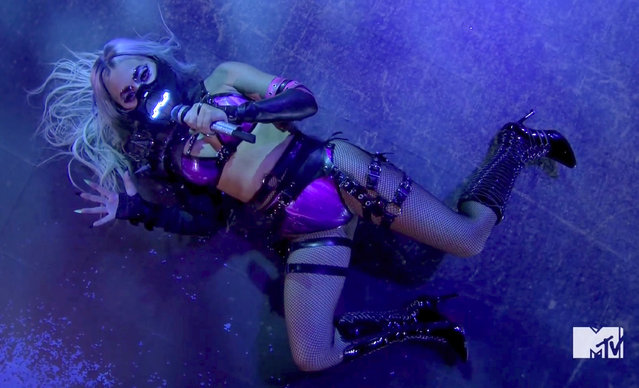 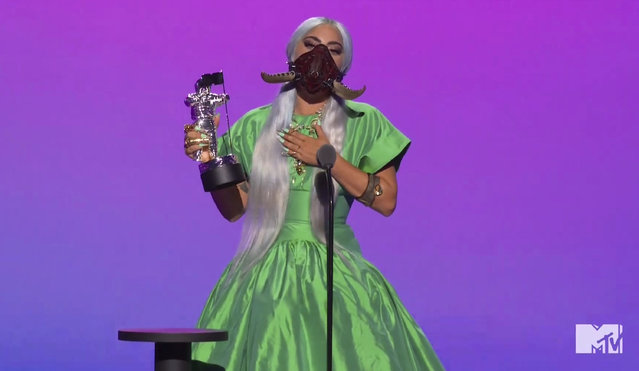 In this video grab issued Sunday, August 30, 2020, by MTV, Lady Gaga accepts the award for song of the year for “Rain On Me” during the MTV Video Music Awards. (Photo by MTV via AP Photo) 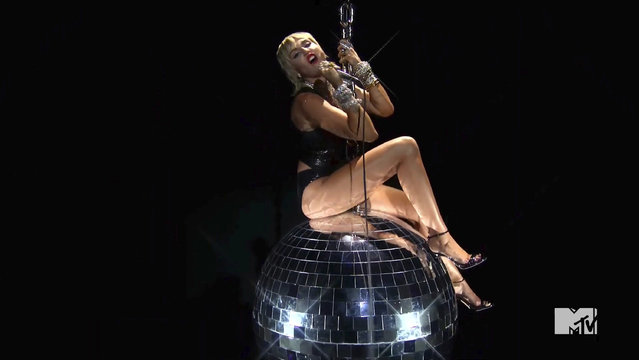 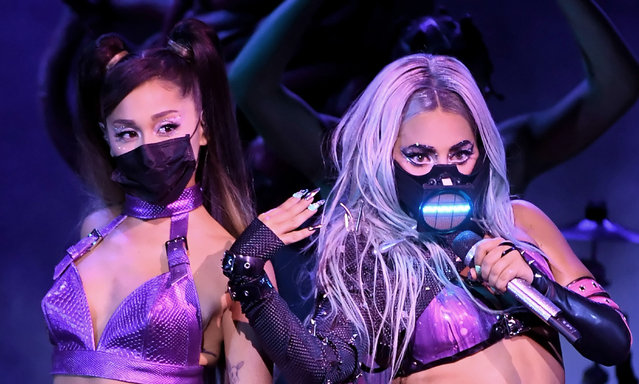