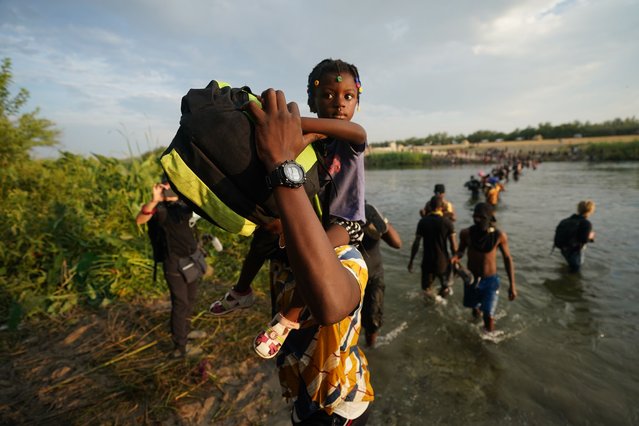 Migrants, many from Haiti, cross the Rio Grande from Del Rio, Texas, to return to Ciudad Acuna, Mexico, Tuesday, September 21, 2021, to avoid deportation from the U.S. The U.S. is flying Haitians camped in a Texas border town back to their homeland and blocking others from crossing the border from Mexico. (Photo by Fernando Llano/AP Photo) 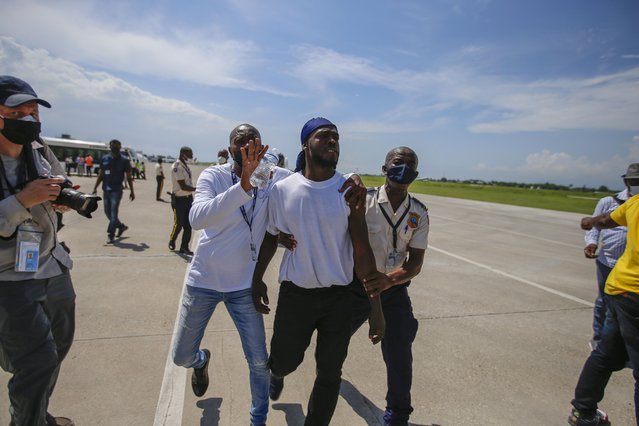 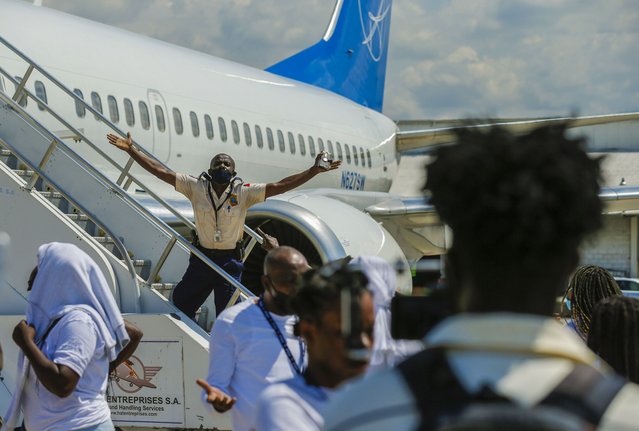 A police officer tries to block Haitians deported from the United States from boarding the same plane they were deported on, in an attempt to return to the United States, on the tarmac of the Toussaint Louverture airport, in Port-au-Prince, Haiti, Tuesday, September 21, 2021. (Photo by Joseph Odelyn/AP Photo) 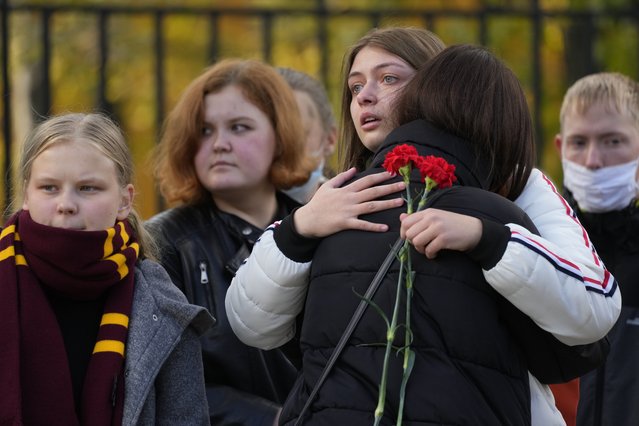 Students comfort each other as they gather outside the Perm State University following a campus shooting in Perm, about 1,100 kilometers (700 miles) east of Moscow, Russia, Tuesday, September 21, 2021. A student opened fire at the university, leaving a number of people dead and injured, before being shot in a crossfire with police and detained. Beyond saying that he was a student, authorities offered no further information on his identity or a possible motive. (Photo by Dmitri Lovetsky/AP Photo) 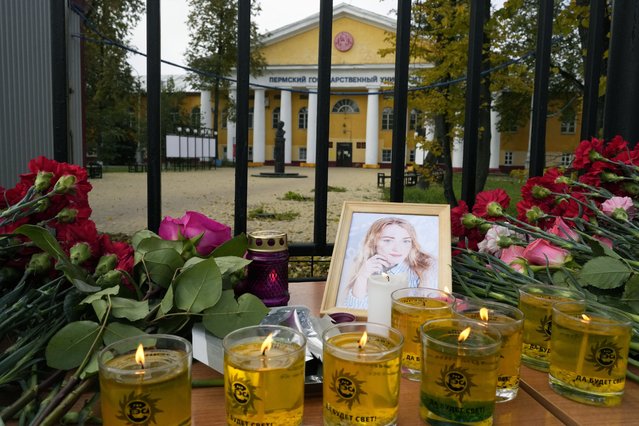 Flowers, candles and a portrait of one of victims are displayed on a table outside the Perm State University in Perm, about 1,100 kilometers (700 miles) east of Moscow, Russia, Tuesday, September 21, 2021. (Photo by Dmitri Lovetsky/AP Photo) 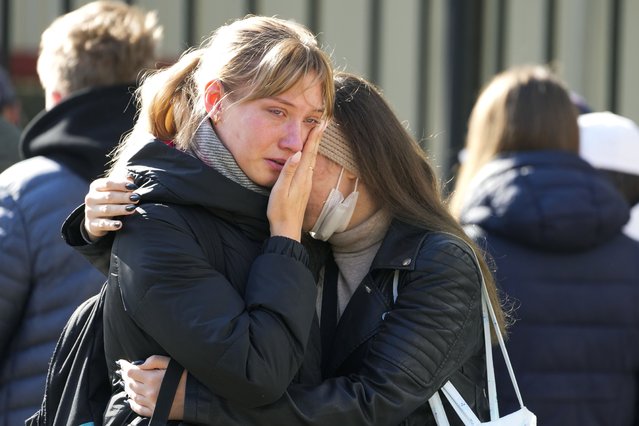 Students comfort each other as they gather outside the Perm State University following a campus shooting in Perm, about 1,100 kilometers (700 miles) east of Moscow, Russia, Tuesday, September 21, 2021. (Photo by Dmitri Lovetsky/AP Photo) 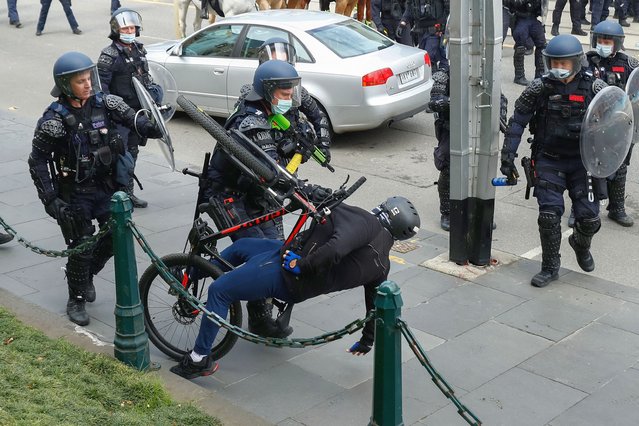 A demonstrator is handled as police officers disperse a protest against Covid-19 regulations in Melbourne on September 21, 2021. (Photo by Con Chronis/AFP Photo) 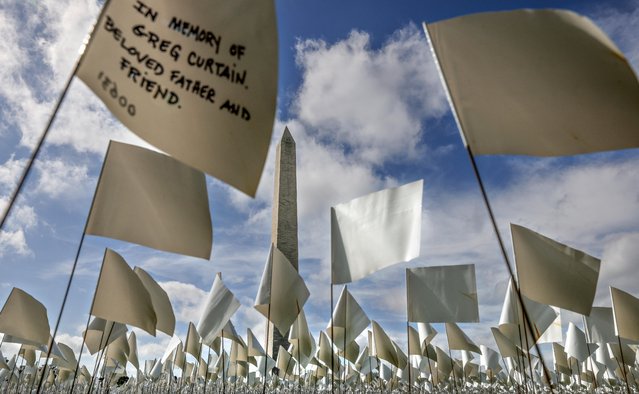 600,000 flags commemorating all Americans who have died due to the coronavirus disease (COVID-19), cover the National Mall in Washington, U.S., September 21, 2021. (Photo by Evelyn Hockstein/Reuters) 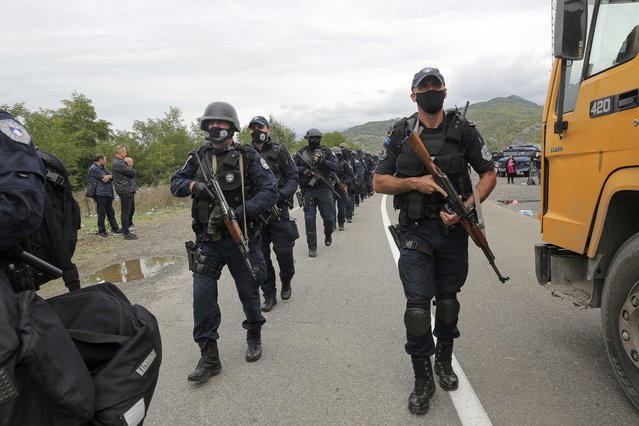 Kosovo police officers walk to replace their colleagues near the northern Kosovo border crossing of Jarinje on Tuesday, September 21, 2021. Tensions soared Monday when Kosovo special police with armored vehicles were sent to the border to impose a rule on temporarily replacing Serb license plates from cars while they drive in Kosovo. (Photo by Visar Kryeziu/AP Photo) 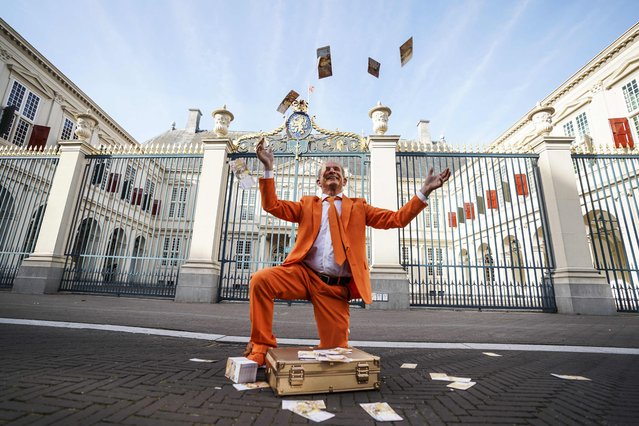 Oranjefan Johan Vlemmix performs outside Noordeinde Palace on the occasion of “Prinsjesdag”, on September 21, 2021 in The Hague. Prinsjesdag is the day on which the reigning monarch of the Netherlands addresses a session of the States-General of the Netherlands to give a speech setting out the main features of government policy for the coming parliamentary session. (Photo by Jeroen Jumelet/ANP/AFP Photo) 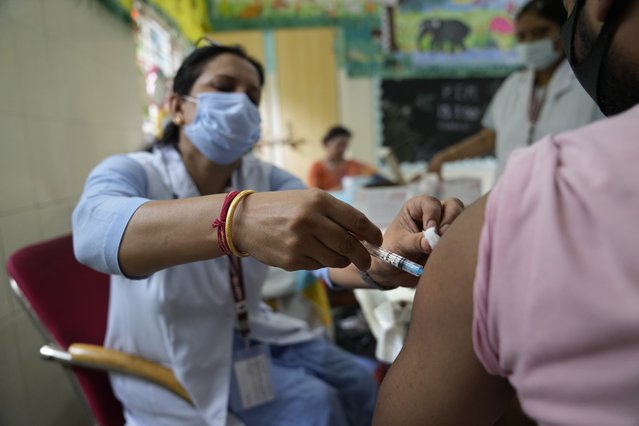 A health worker administers the vaccine for COVID-19 at a vaccination center set up at a government-run school in New Delhi, India, Tuesday, September 21, 2021. India, the world's largest vaccine producer, will resume exports and donations of surplus coronavirus vaccines in October after halting them during a devastating surge in domestic infections in April, the health minister said Monday. (Photo by Manish Swarup/AP Photo) 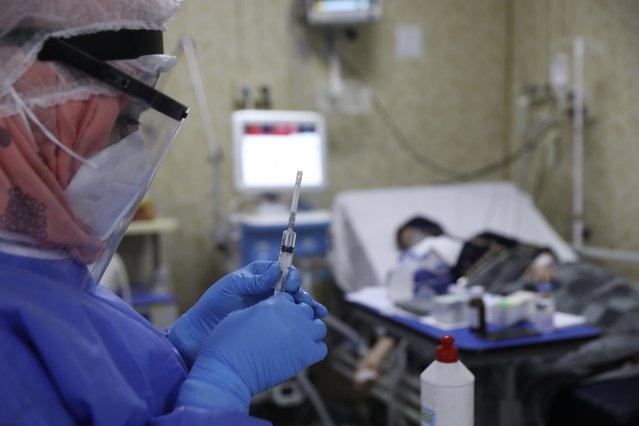 A nurse prepares a syringe for a patient infected with the coronavirus in the intensive care unit at the Syrian American Medical Society Hospital, in the city of Idlib, northwest Syria, Monday, September 20, 2021. Coronavirus cases are surging to the worst levels of the pandemic in Idlib province, a rebel stronghold in Syria – a particularly devastating development in a region where scores of hospitals have been bombed and that doctors and nurses have fled in droves during a decade of war. (Photo by Ghaith Alsayed/AP Photo) 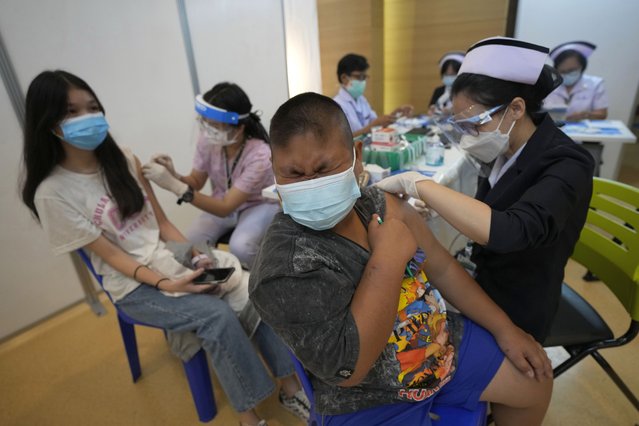 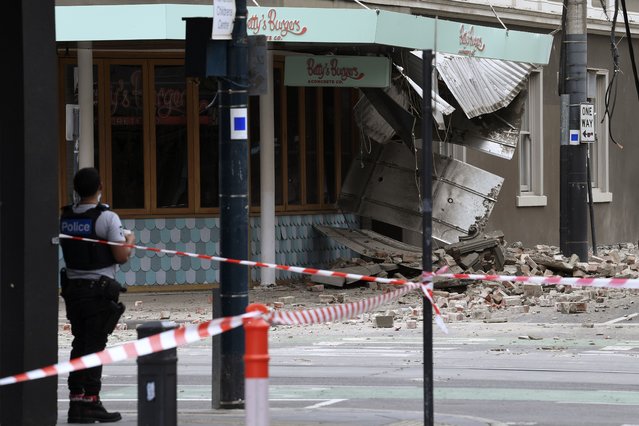 A police officer closes an intersection where debris is scattered in the road after an earthquake damaged a building in Melbourne, Wednesday, September 22, 2021. A magnitude 5.8 earthquake caused damage in the city of Melbourne in an unusually powerful temblor for Australia, Geoscience Australia said. (Photo by James Ross/AAP Image via AP Photo) Lava from a volcano engulfs a building near El Paso on the island of La Palma in the Canaries, Spain, Monday September 20, 2021. Giant rivers of lava are tumbling slowly but relentlessly toward the sea after a volcano, seen in backround, erupted on a Spanish island off northwest Africa. The lava is destroying everything in its path but prompt evacuations helped avoid casualties after Sunday's eruption. (Photo by k*ke Rincon/Europa Press via AP Photo) 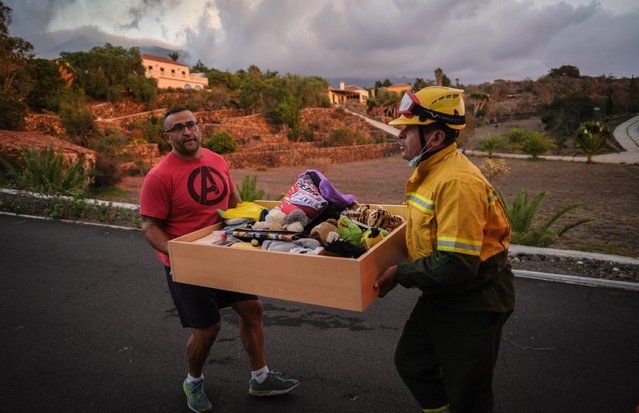 People leave their homes as Mount Cumbre Vieja continues to erupt in El Paso, spewing out columns of smoke, ash and lava as seen from Los Llanos de Aridane on the Canary island of La Palma on September 20, 2021. The Cumbre Vieja volcano erupted on Spain's Canary Islands today spewing out lava, ash and a huge column of smoke after days of increased seismic activity, sparking evacuations of people living nearby, authorities said. Cumbre Vieja straddles a ridge in the south of La Palma island and has erupted twice in the 20th century, first in 1949 then again in 1971. (Photo by Andres Gutierrez/Anadolu Agency via Getty Images) 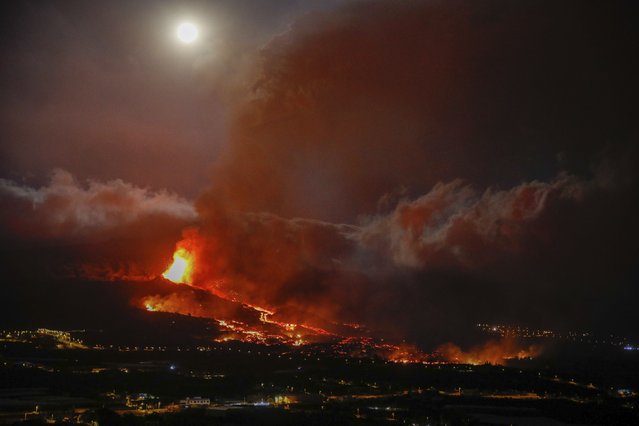 Lava erupts from a volcano near El Paso on the island of La Palma in the Canaries, Spain, Monday September 20, 2021. (Photo by k*ke Rincon/Europa Press via AP Photo) 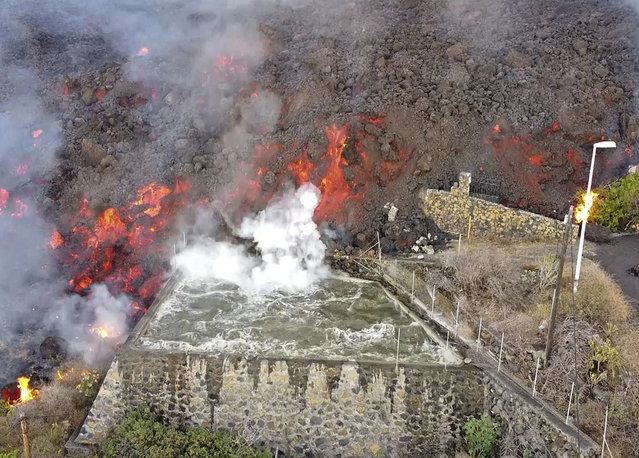 Hot lava reaches a balsa normally used for for irrigation after an eruption of a volcano on the island of La Palma in the Canaries, Spain, Monday September 20, 2021. (Photo by Europa Press via AP Photo) 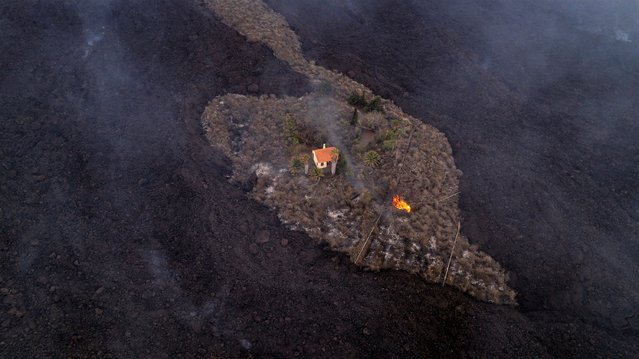 In this photo provided by iLoveTheWorld, a house remains intact as lava flows after a volcano erupted near Las Manchas on the island of La Palma in the Canaries, Spain, Monday, September 20, 2021. A dormant volcano on a small Spanish island in the Atlantic Ocean erupted on Sunday, forcing the evacuation of thousands of people. Huge plumes of black-and-white smoke shot out from a volcanic ridge where scientists had been monitoring the accumulation of molten lava below the surface. (Photo by Alfonso Escalero/iLoveTheWorld via AP Photo) 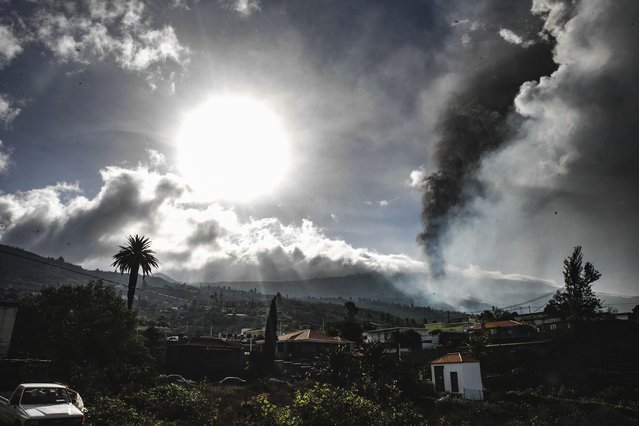 Smoke billows from a volcano near Los Llanos de Ariadne on the island of La Palma in the Canaries, Spain, Tuesday September 21, 2021. Several small earthquakes have shaken the Spanish island of La Palma off northwest Africa, keeping nerves on edge as rivers of lava continue to flow toward the sea after Sunday's volcanic eruption with the lava gradually closing in on the more densely populated coastline. (Photo by k*ke Rincon/Europa Press via AP Photo) 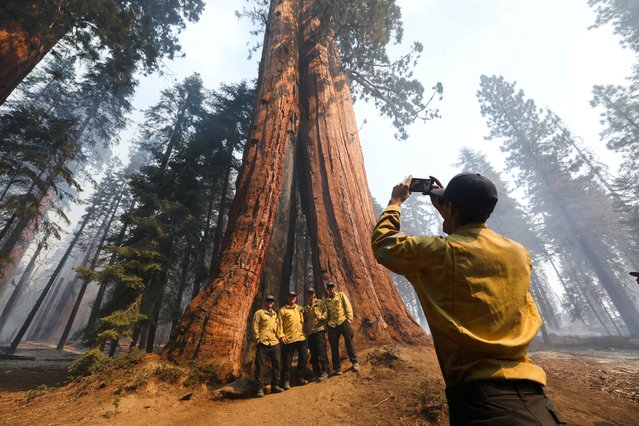 Ecuadorian indigenous people celebrate the festival of the moon or Kulla Raymi, in Quito, Ecuador, 21 September 2021. A circle on the ground made up of fruits and inside the Andean symbol of the chacana, multinational geometric flags and a cross that symbolizes the four cardinal points, were the setting in which the festival of the moon, the Kulla, was commemorated this Tuesday. Raymi, on a hill in Quito. It is one of the four most significant festivities of the Andean agroecological calendar, which commemorates the beginning of life and exalts women as the maximum representation of fertility. (Photo by Jose Jacome/EPA/EFE) 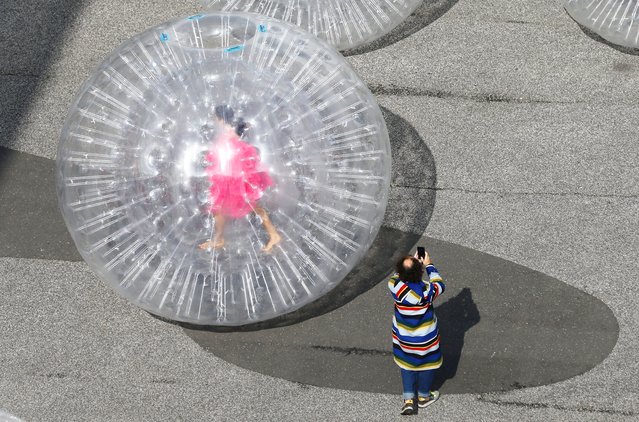 An artist is seen in a transparent plastic ball during the performance “Tears” by Monster Chetwynd in front of the venue of the Art Basel art fair at the Messeplatz square in Basel, Switzerland on September 21, 2021. (Photo by Arnd Wiegmann/Reuters) 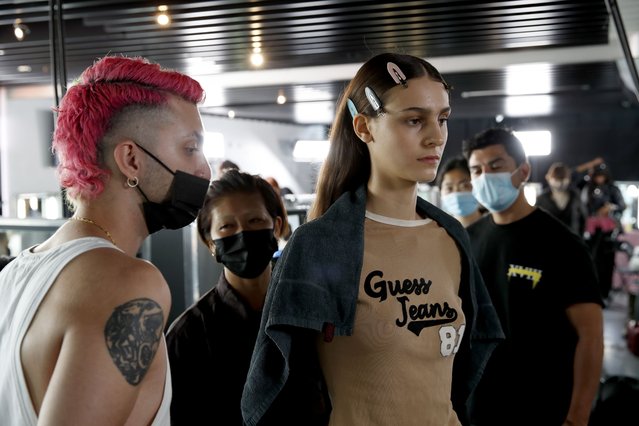