South Korean protesters carry a caricature of U.S. President Donald Trump during a rally to denounce the United States' policy against North Korea, near U.S. Embassy in Seoul, South Korea, Wednesday, September 27, 2017. North Korea's top diplomat said Monday that a weekend tweet by Trump was a “declaration of war” and North Korea has the right to retaliate by shooting down U.S. bombers, even in international airspace. The caricature reads: “North Korea is destroyed”. (Photo by Ahn Young-joon/AP Photo) 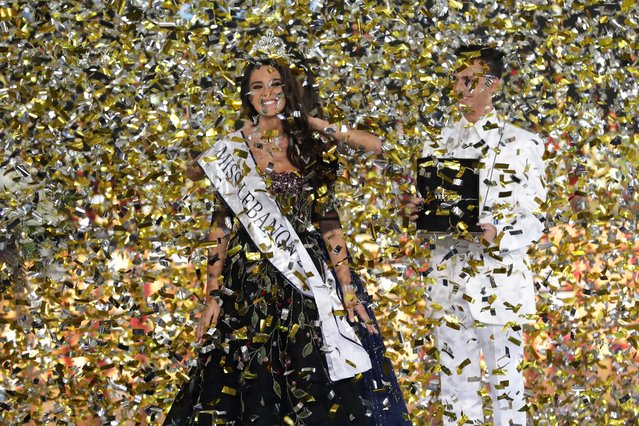 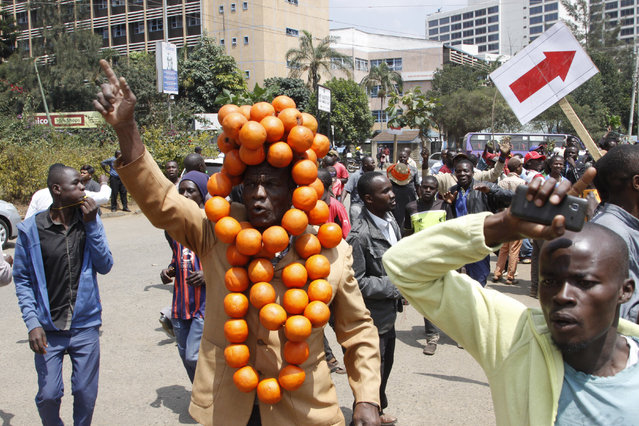 Supporters of opposition leader, Raila Odinga, one wearing oranges, the symbol the Democratic Party of Kenya, demonstrate in Nairobi, Kenya Tuesday, September 26, 2017. The protest is to demand the resignations of top officials of the Independent Electoral and Boundaries Commission following the annulment of presidential elections in August. Ruling party supporters also demonstrated calling for no change to the electoral body. (Photo by Khalil Senosi/AP Photo) 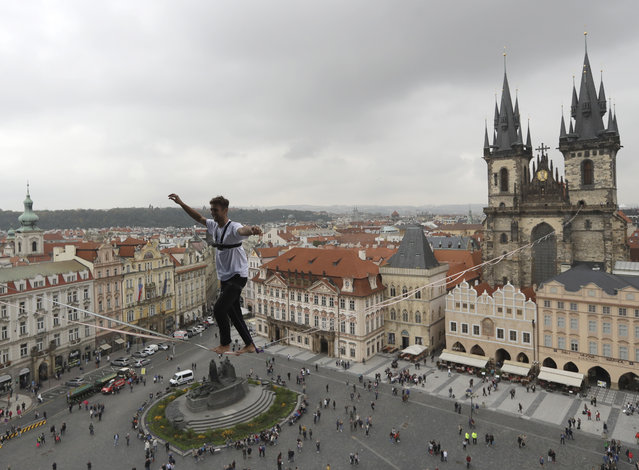 An athlete balances on a slackline stretched across the Old Town Square in Prague, Czech Republic, Monday, September 25, 2017. The performance was part of a campaign supporting people living with diabetes. (Photo by Petr David Josek/AP Photo) 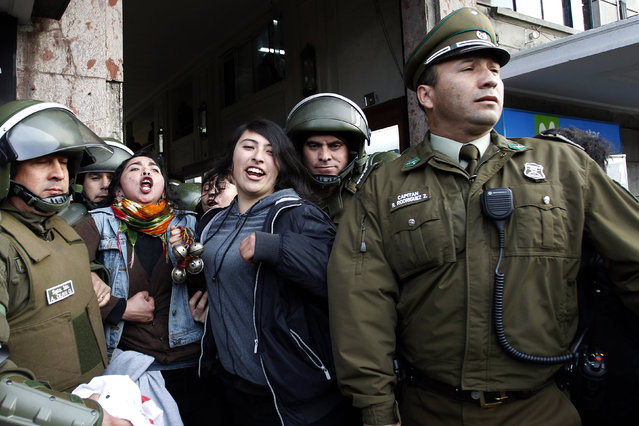 Two young people shout slogans while being detained by police during a demonstration in Concepcion, southern Chile, 25 September 2017. At least 30 activists were detained today after a protest that took place outside the cathedral of Concepcion, southern Chile, in support of four Mapuche activists who have been on hunger strike for 110 days. (Photo by Dragomir Yankovic/EPA/EFE) 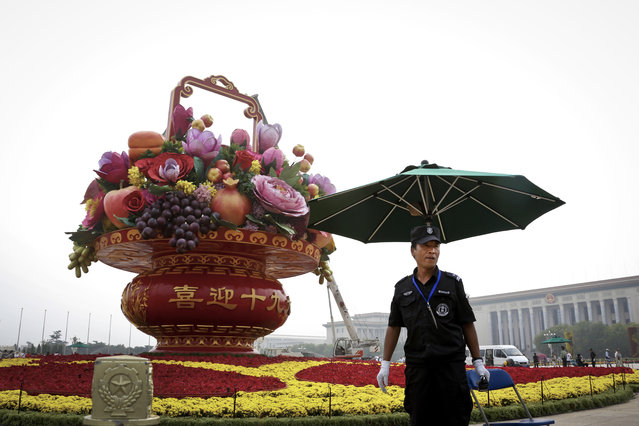 A security officer stands watch near a giant basket decorated with replicas of flowers and fruits on display at Tiananmen Square in Beijing, Monday, September 25, 2017. Hundreds of thousands foreign and domestic tourists are expected to flock to the square to celebrate the National Day and Mid-Autumn Festival over the week-long holidays starting on Sept. 30. (Photo by Andy Wong/AP Photo) 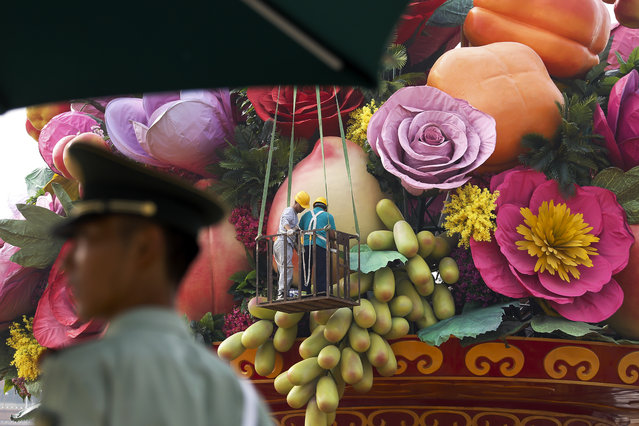 A Chinese paramilitary policeman stands watch as workers put finishing touch on a giant basket decorated with replicas of flowers and fruits on display at Tiananmen Square in Beijing, Monday, September 25, 2017. (Photo by Andy Wong/AP Photo) 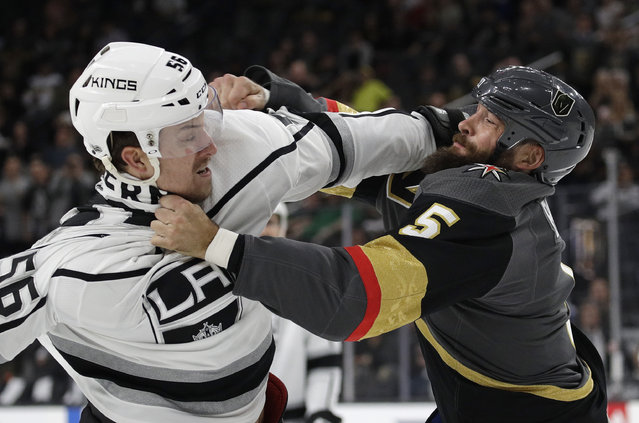 A Nepali child plays on a swing, popularly known as the “Dashain Ping”, on the sixth day of the Hindu festival of Dashain in Lalitpur, on the outskirts of Kathmandu on September 26, 2017. People of all ages play on a swing in towns and villages, while marking the largest Hindu festival of Dashain in honour of the Hindu goddess of power, Durga. (Photo by Prakash Mathema/AFP Photo) 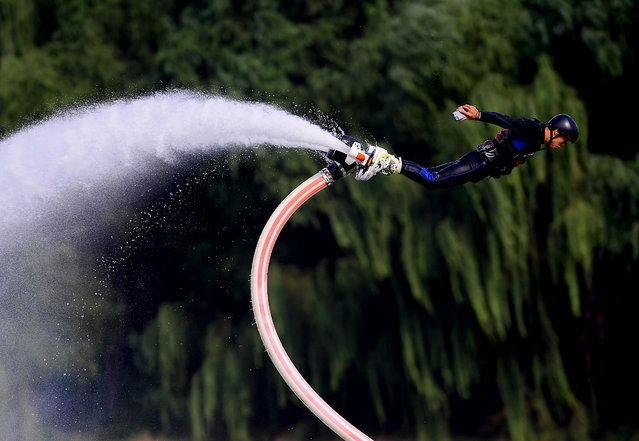 This photo taken on September 24, 2017 shows a man performing on a water-propelled flyboard at Shenyang Olympic Park in Shenyang in China's northeastern Liaoning province. (Photo by AFP Photo/Stringer) Kadri Gursel, a columnist for Turkey's main opposition newspaper Cumhuriyet, kisses his wife Nazire Kalkan Gursel after his release from Silivri prison outside Istanbul, early Tuesday, September 26, 2017. A court in Istanbul has ordered Gursel released from prison pending the conclusion of his trial. The court on Monday ruled that four other Cumhuriyet newspaper employees, including editor-in-chief Murat Sabuncu and investigative journalist Ahmet Sik, remain in pre-trial detention. (Photo by Yasin Akgul/AFP Photo) 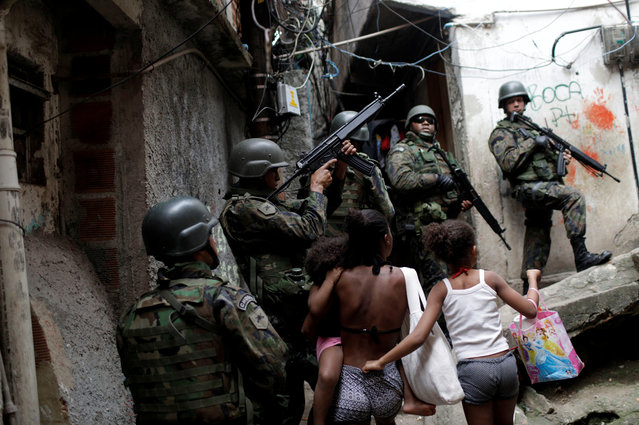 Soldiers take up a position during an operation after violent clashes between drug gangs in Rocinha slum in Rio de Janeiro, Brazil on September 22, 2017. (Photo by Ricardo Moraes/Reuters) 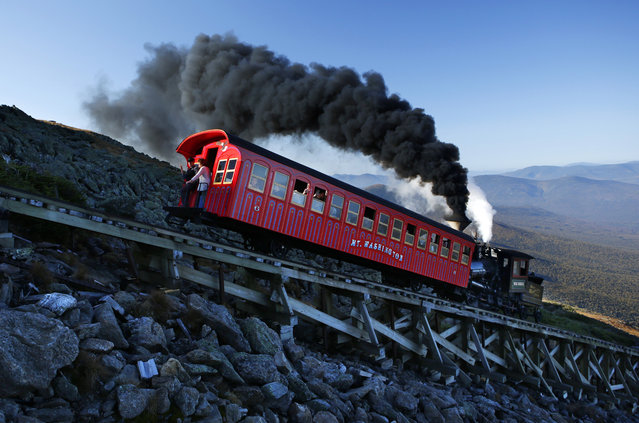 A vintage coal-fired steam engine pushes a passenger car up the Cog Railway on a 3.8-mile journey to the summit of 6,288-foot Mount Washington in New Hampshire, Sunday, September 24, 2017. Tourists visiting the northeast's highest peak were rewarded with summer-like weather on the first weekend of autumn. (Photo by Robert F. Bukaty/AP Photo) 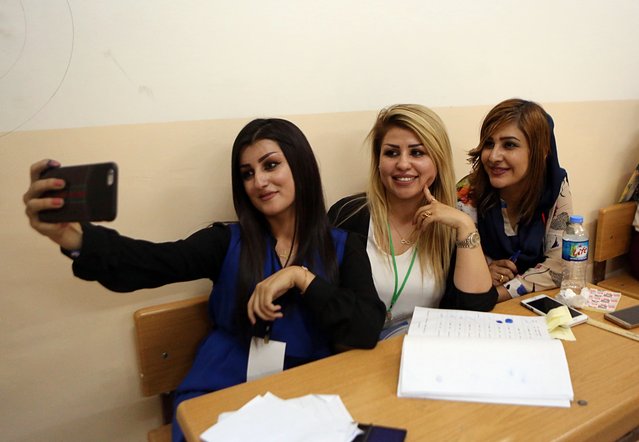 Kurdish Election staff take a picture in a polling station during the referendum on independence from Iraq in Irbil, Iraq, Monday, September 25, 2017. The vote is not binding and is not expected to result in independence any time soon, but was hailed as historic by Kurdish leaders spearheading the campaign. (Photo by Khalid Mohammed/AP Photo) 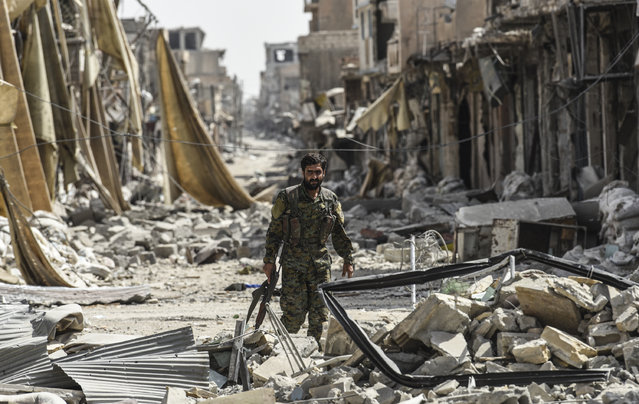 A member of the Syrian Democratic Forces (SDF) walks through the debris in the old city centre on the eastern frontline of Raqa on September 25, 2017. Syrian fighters, backed by US special forces, are battling to clear the last remaining Islamic State (IS) group fighters holed up in their crumbling stronghold of Raqa. (Photo by Bulent Kilic/AFP Photo) 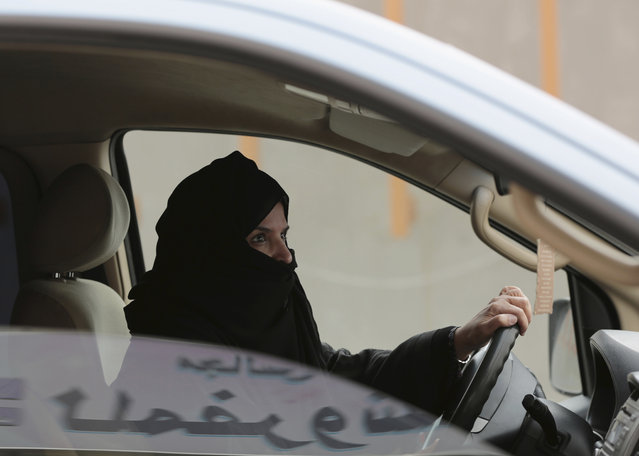 In this Saturday, March 29, 2014 file photo, Aziza Yousef drives a car on a highway in Riyadh, Saudi Arabia, as part of a campaign to defy Saudi Arabia's ban on women driving. Saudi Arabia says it will allow women to drive for the first time in the ultra-conservative kingdom. The kingdom, which announced the change on Tuesday, September 26, 2017, was the only the country in the world to bar women from driving and for years had garnered negative publicity internationally for detaining women who defied the ban. (Photo by Hasan Jamali/AP Photo) 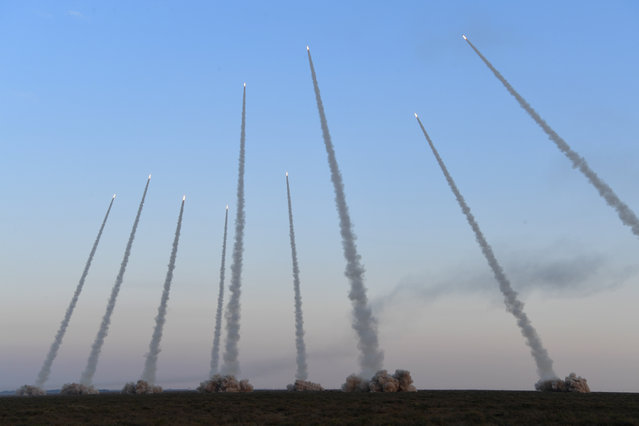 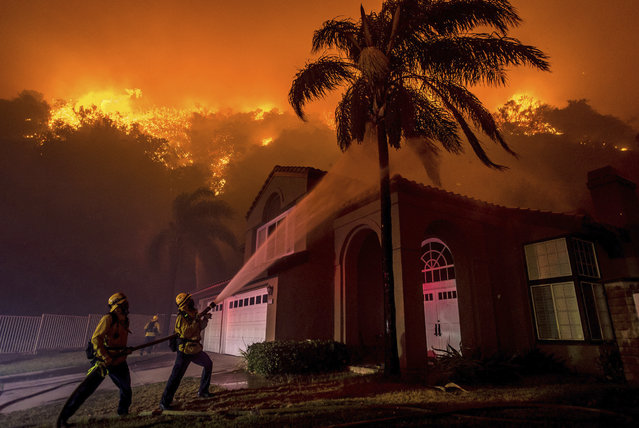 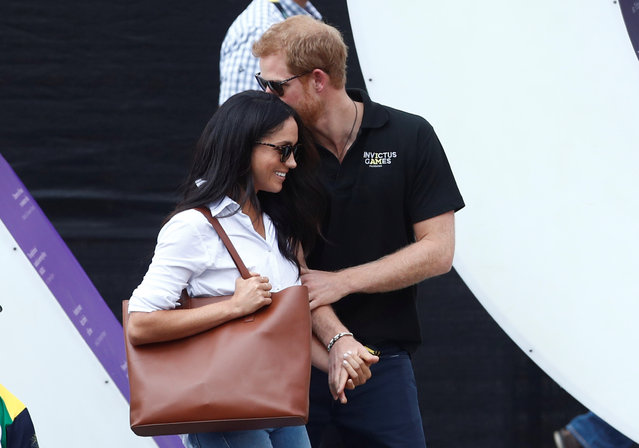 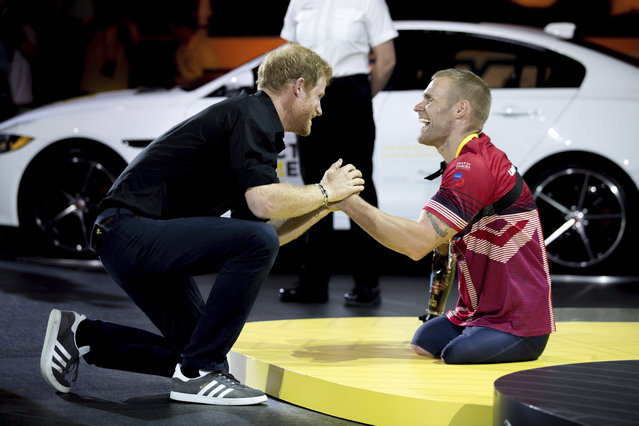 Prince Harry congratulates Mark Ormrod, of the U.K., on his silver medal in indoor rowing at the Invictus Games in Toronto on Tuesday, September 26, 2017. (Chris Donovan/The Canadian Press via AP Photo) 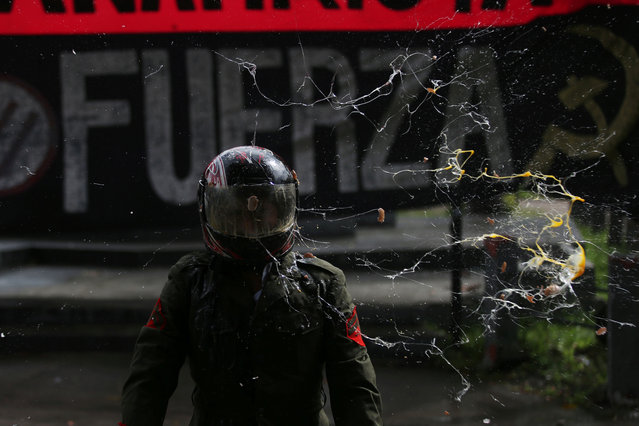 An El Salvador National University student dressed as a soldier performs during a protest against the government, which uses the military to control crime in San Salvador, El Salvador, September 25, 2017. (Photo by Jose Cabezas/Reuters) 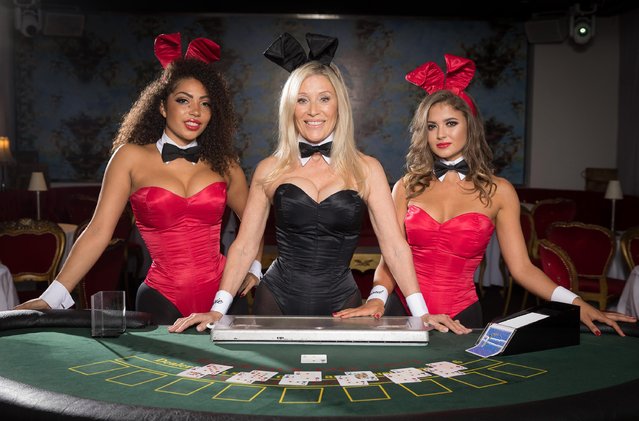