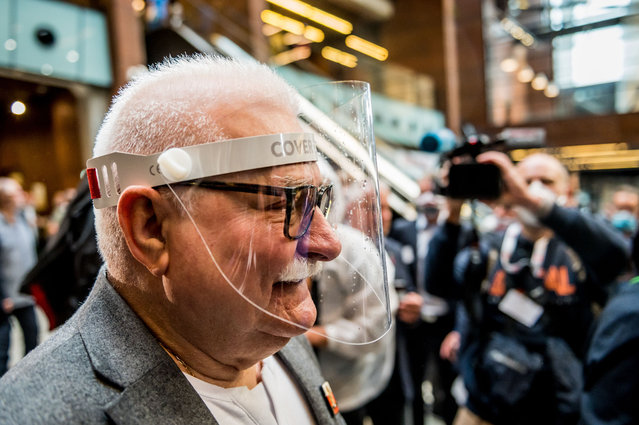 Former Polish President and Nobel Peace Prize Laureate Lech Walesa attends the 40th anniversary of the Gdansk Agreement and the Solidarity in Gdansk, Poland on August 31, 2020. The Gdansk Agreement and the Solidarity trade union were between striking workers and Poland's communist authorities which led to the creation of Independent Self-governing Labor Union “Solidarity”. (Photo by Marcin Bruniecki/Rex Features/Shutterstock) 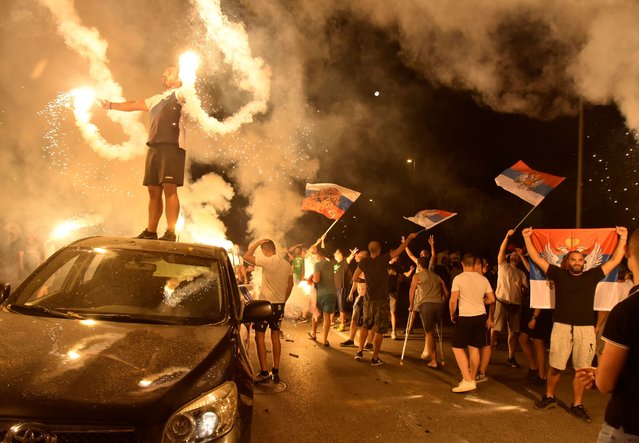 Supporters of opposition groups celebrate after poll closed in Montenegro's parliamentary elections in Podgorica, Montenegro, early Monday, August 31, 2020. Montenegro's pro-Serb and Russian opposition groups claimed victory against the ruling pro-Western party in a tense parliamentary election that could see a change in the course of the small Balkan state. (Photo by Risto Bozovic/AP Photo) 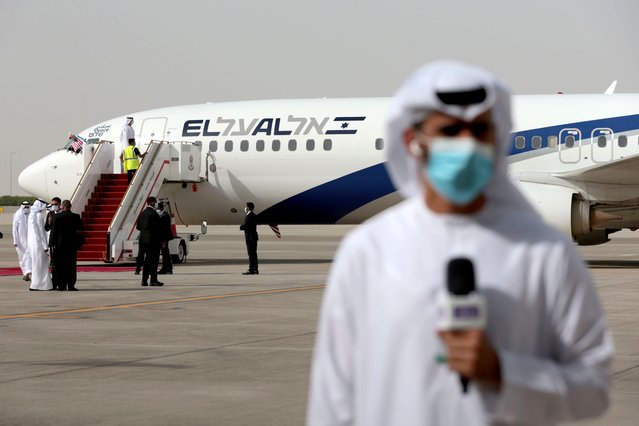 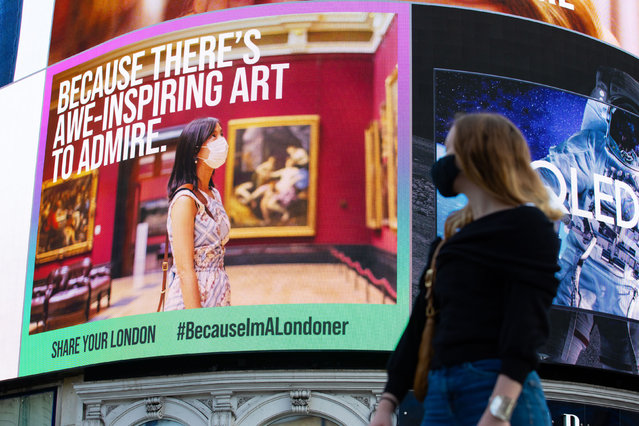 A woman looks at a digital billboard at Piccadilly Circus in London on August 31, 2020 promoting the #BecauseImALondoner campaign, which aims to encourage residents to safely explore their areas and support local businesses as part of Covid recovery efforts. (Photo by David Parry/PA Wire Press Association) 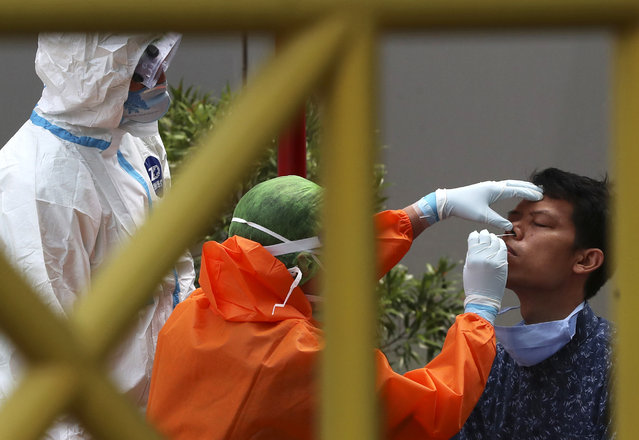 A health worker takes a nasal swab sample from a man during a public testing for the coronavirus conducted in Jakarta, Indonesia, Tuesday, September 1, 2020. (Photo by Achmad Ibrahim/AP Photo) 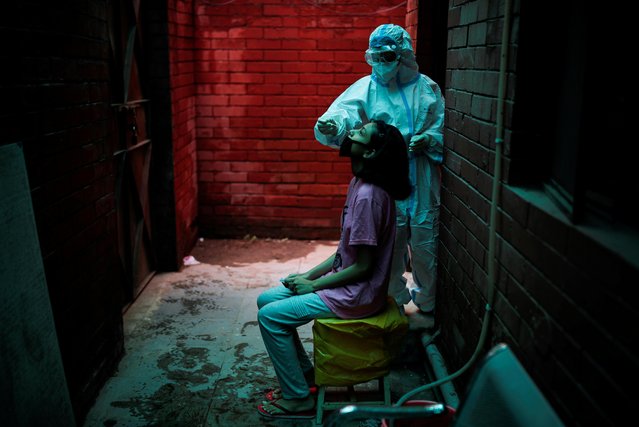 A health worker in personal protective equipment (PPE) collects a sample using a swab from a person at a local health center to conduct tests for the coronavirus amid the spread of the disease, in New Delhi, India on August 31, 2020. (Photo by Adnan Abidi/Reuters) 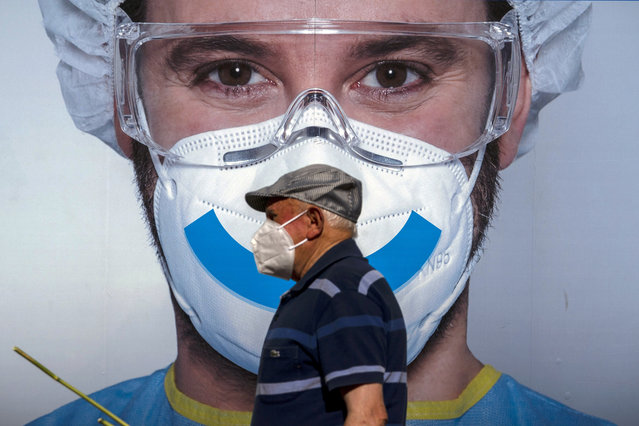 A man wearing face mask walks past an advertising of a private clinic in Barcelona, Spain on Monday August 31, 2020. Spain, with nearly 440,000 infections of the new virus since February, has become western Europe's hardest hit country by a new surging wave of fresh outbreaks. (Photo by Emilio Morenatti/AP Photo) 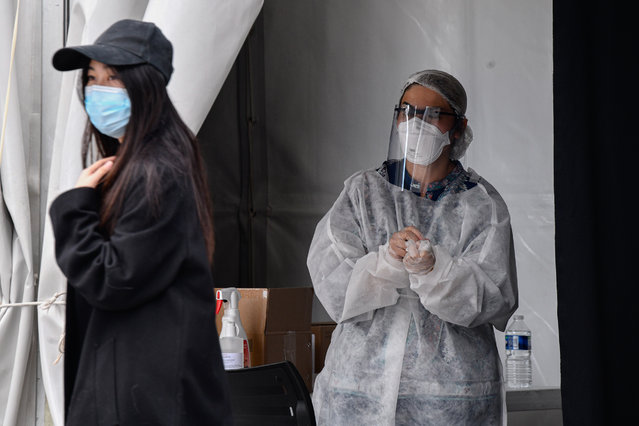 Nurses and doctors perform PCR tests in the laboratory installed in front of the Paris City Hall against the spread of the novel Coronavirus (Covid-19) on August 31, 2020 in Paris, France. (Photo by Julien Mattia/Anadolu Agency via Getty Images) 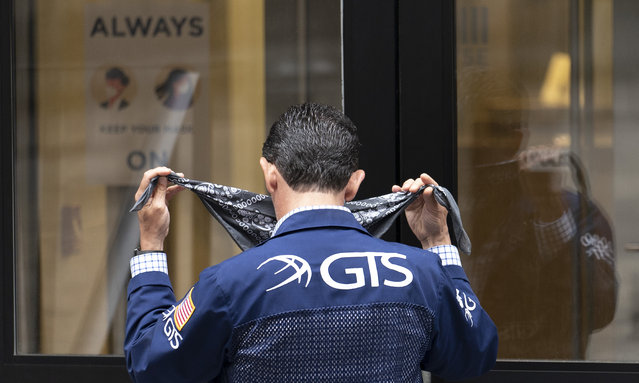 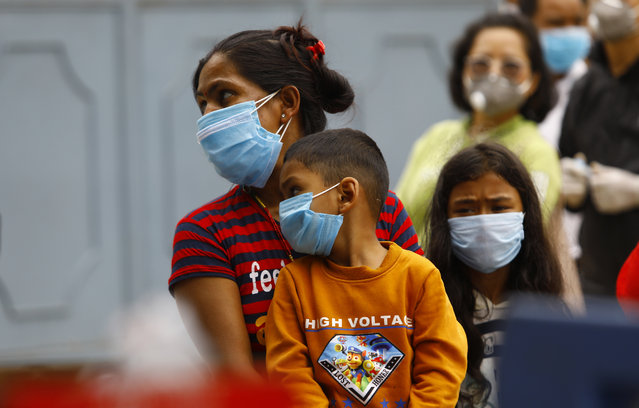 A kid waits for her swab collection amid covid-19 epidemic at a hospital in Kathmandu, Nepal on August 31, 2020. (Photo by Saroj Baizu/NurPhoto via Getty Images) 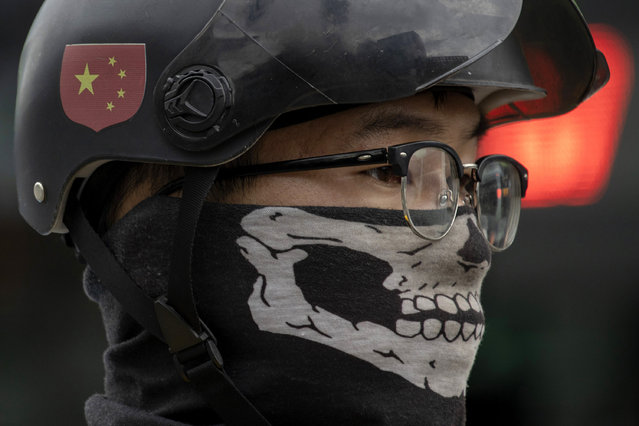 A delivery man wears a skull themed mask and a helmet with the Chinese flag colors on the streets of Beijing on Monday, August 31, 2020. Even as China has largely controlled the outbreak, the coronavirus is still surging across parts of the world. (Photo by Ng Han Guan/AP Photo) 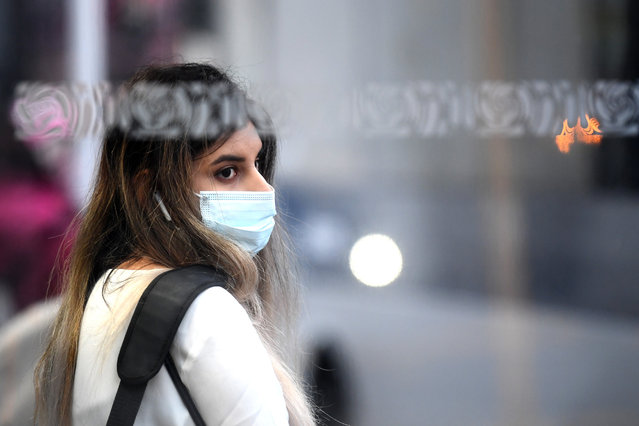 A woman wearing a face mask waits for a bus on August 31, 2020 in Auckland, New Zealand. Face coverings are now compulsory for all New Zealanders over the age of 12 on public transport or planes under current Alert Level restrictions in place across the country. Auckland is currently at Alert Level 2.5 while the rest of New Zealand is at Alert Level 2. (Photo by Hannah Peters/Getty Images) 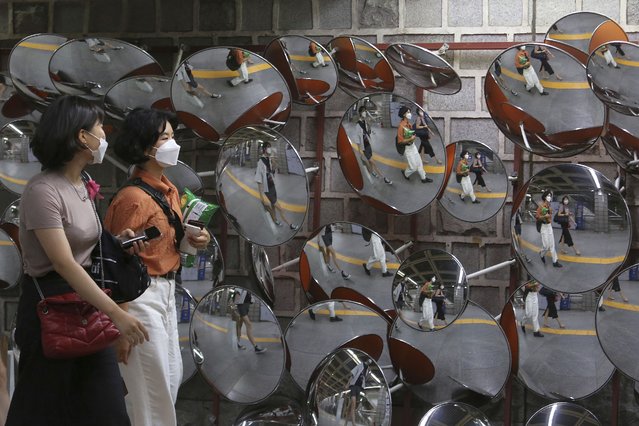 People wearing face masks to help protect against the spread of the coronavirus are reflected in mirrors at a subway station in Seoul, South Korea, Monday August 31, 2020. South Korea has counted its 18th straight day of triple-digit daily jumps in coronavirus cases as its health minister warned about an increase in transmissions gone untraced. (Photo by Ahn Young-joon/AP Photo) 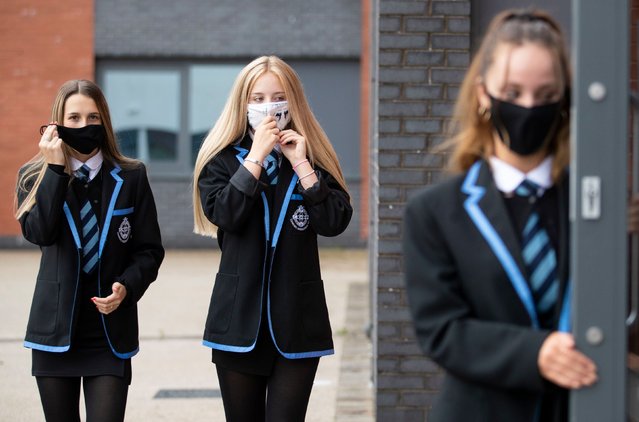 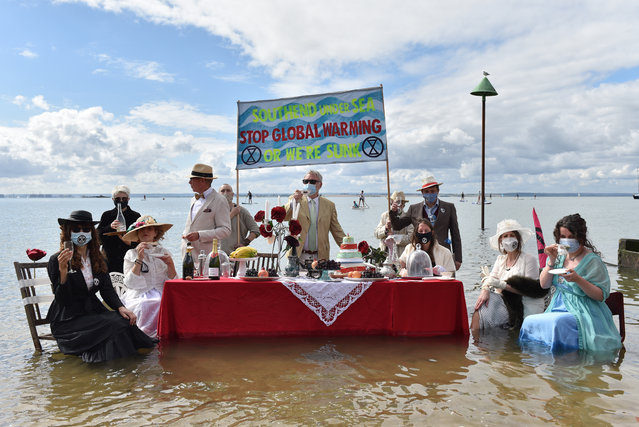 Extinction Rebellion protesters stage a Titanic-themed dinner party in the sea to illustrate the threat of rising sea levels, on Chalkwell beach on August 31, 2020 in Southend-on-Sea, England. Due to the coronavirus pandemic, Extinction Rebellion protesters have been encouraged to take action locally against the airports, the fossil fuel industry and petrol stations and banks ahead of larger-scale demonstrations planned for London, Manchester and Cardiff on September 1. (Photo by John Keeble/Getty Images) 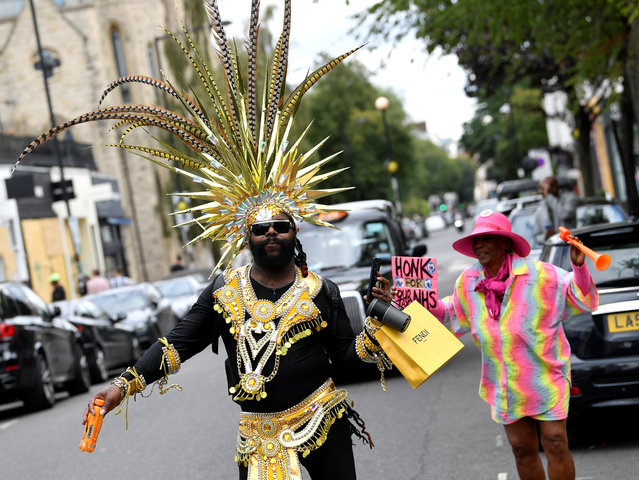 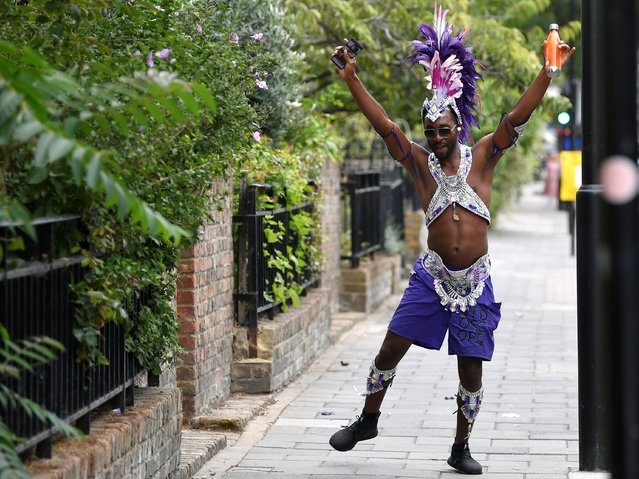 A reveller dressed in carnival costume dances after the normal Notting Hill Carnival festivities was cancelled amid the coronavirus disease (COVID-19) outbreak, in London, Britain, August 31, 2020. (Photo by Toby Melville/Reuters) 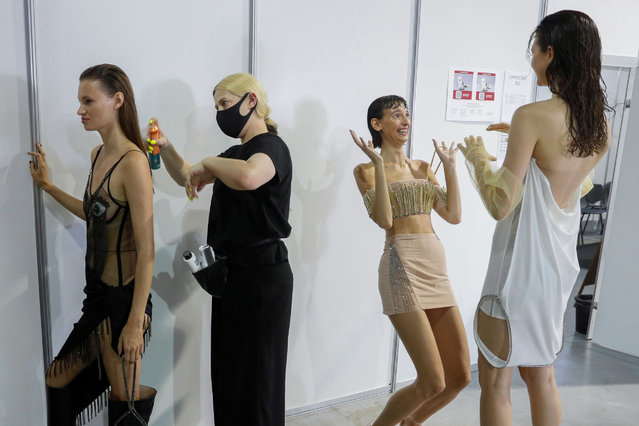