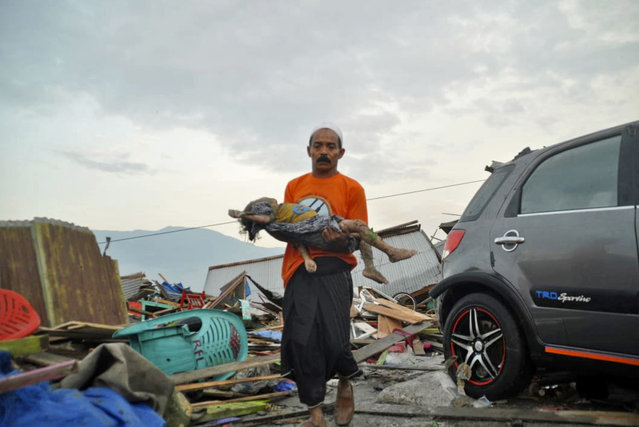 A man carries the body of a child who was killed in the tsunami in Palu, Central Sulawesi, Indonesia, Saturday, September 29, 2018. A powerful earthquake rocked the Indonesian island of Sulawesi on Friday, triggering a 3-meter-tall (10-foot-tall) tsunami that an official said swept away houses in at least two cities. (Photo by AP Photo/Rifki) 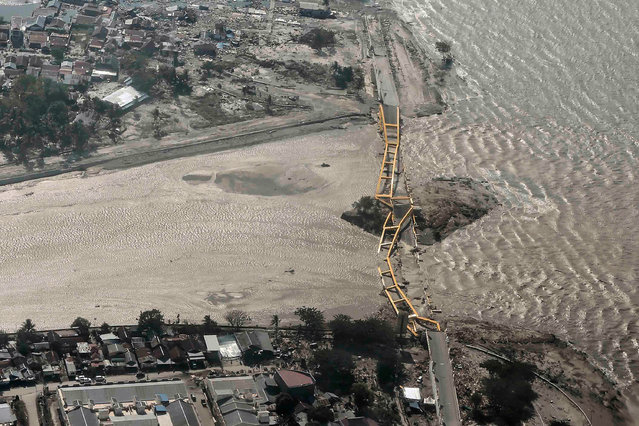 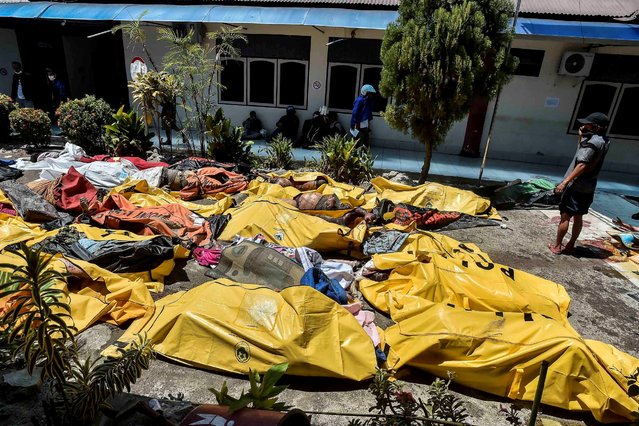 A man examines earthquake and tsunami victims who were placed outside the Bhayangkara Hospital after a quake in Palu, Central Sulawesi, Indonesia September 30, 2018 in this photo taken by Antara Foto. (Photo by Muhammad Adimaja/Reuters/Antara Foto) 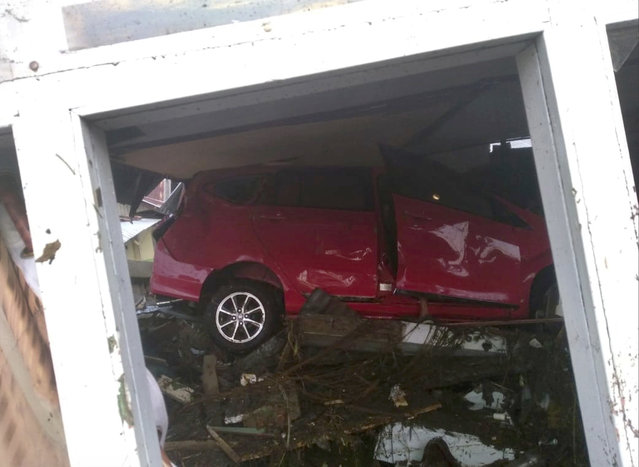 A car swept away by tsunami is seen stuck under a damaged building in Palu, Central Sulawesi, Indonesia, Saturday, September 29, 2018. A powerful earthquake rocked the Indonesian island of Sulawesi on Friday, triggering a 3-meter-tall (10-foot-tall) tsunami that an official said swept away houses in at least two cities. (Photo by Dede Budiyarto via AP Photo) 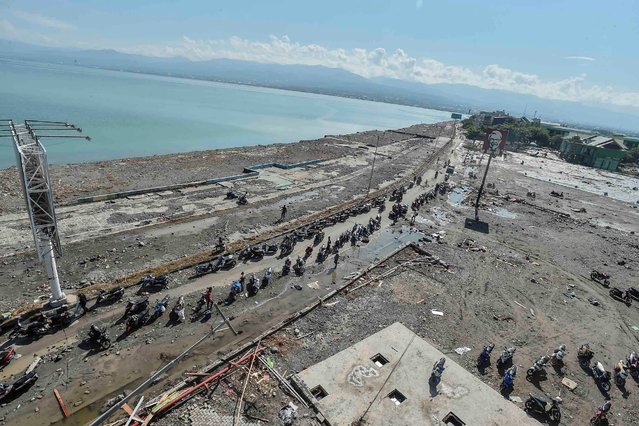 A general view of Taman Ria's beach which was hit by a tsunami, after a quake in West Palu, Central Sulawesi, Indonesia September 30, 2018 in this photo taken by Antara Foto. (Photo by Muhammad Adimaja/Reuters/Antara Foto) 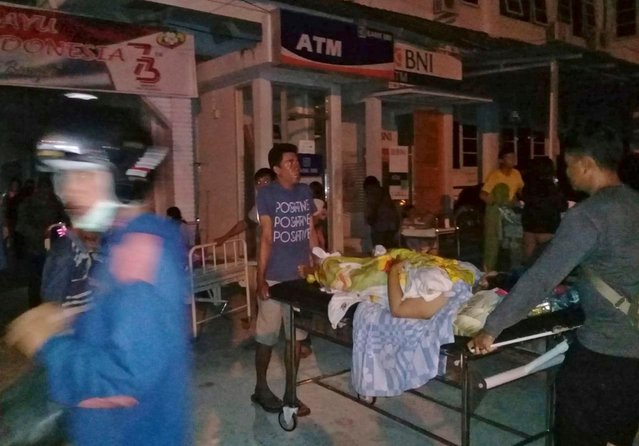 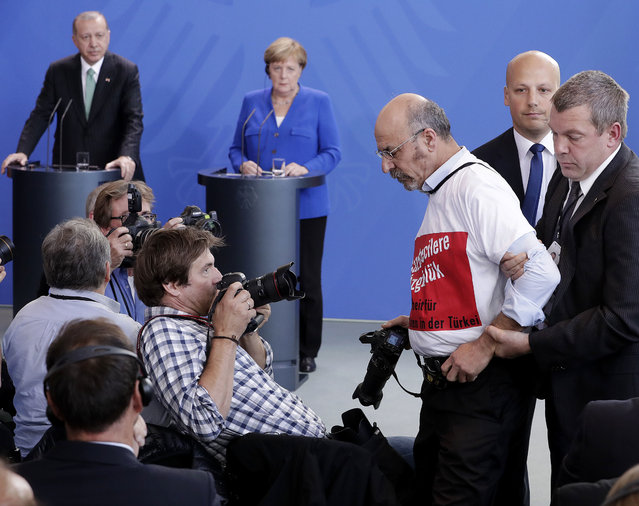 A protester is taken away as Turkish President Recep Tayyip Erdogan and German Chancellor Angela Merkel, right, give a joint press conference in Berlin, Germany, Friday, September 28, 2018. Erdogan is on a three-day official state visit to Germany. (Photo by Michael Sohn/AP Photo) 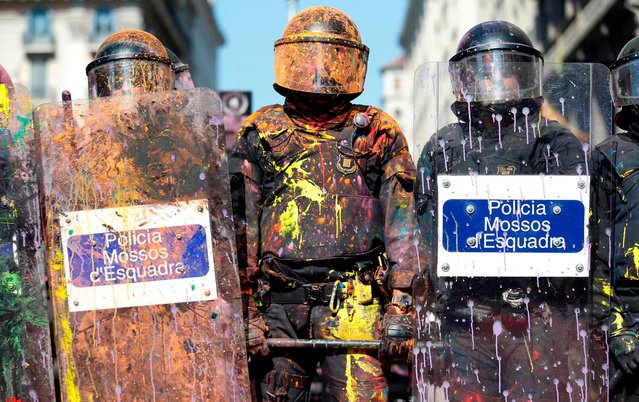 Catalan regional police “Mossos D” Esquadra' officers covered in paint stand guard after clashing with separatist protesters during a counter- protest against a demonstration in support of Spanish police in Barcelona on September 29, 2018. Monday, October 1, will mark one year since a banned independence referendum in Catalonia which was met with a massive police crackdown, captured the world' s attention and plunged Spain into its worst political crisis in decades. (Photo by Pau Barrena/AFP Photo) 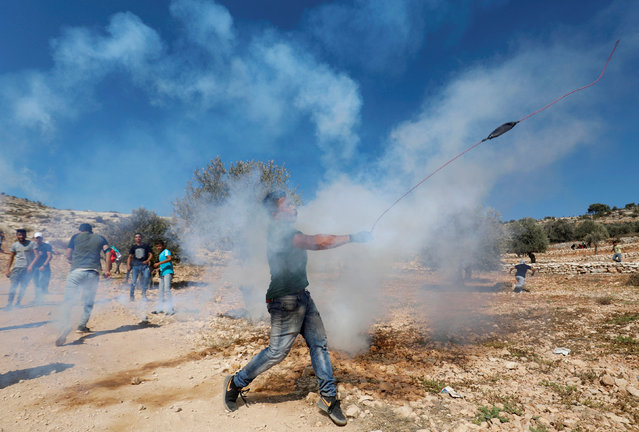 A Palestinian demonstrator hurls stones at Israeli troops during a protest against Israeli land seizures for Jewish settlements, in the village of Ras Karkar, near Ramallah in the occupied West Bank September 28, 2018. (Photo by Mohamad Torokman/Reuters) 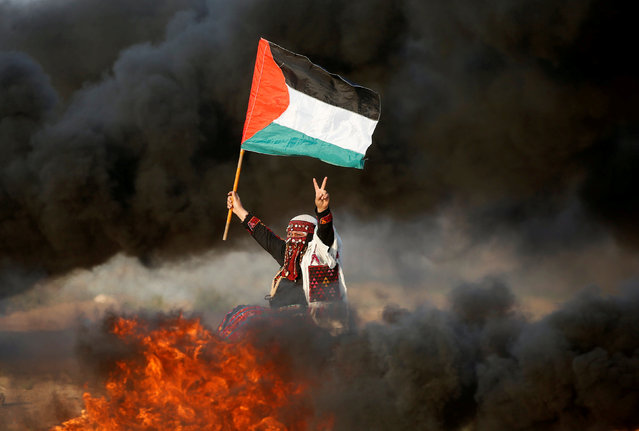 A woman waves a Palestinian flag during a protest calling for lifting the Israeli blockade on Gaza and demanding the right to return to their homeland, at the Israel-Gaza border fence east of Gaza City September 28, 2018. (Photo by Mohammed Salem/Reuters) 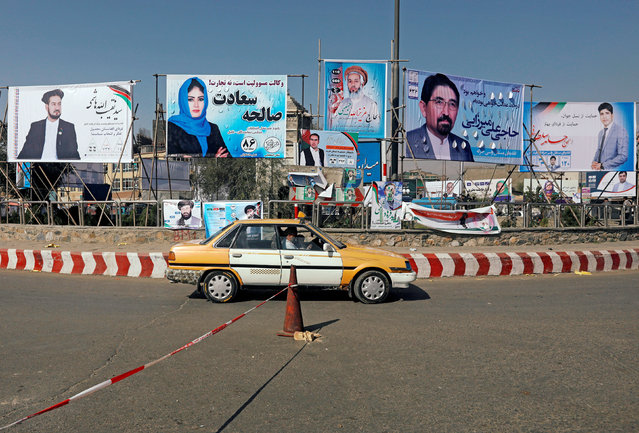 A vehicle drives in front of election posters of parliamentarian candidates installed during the first day of elections campaign in Kabul, Afghanistan September 28, 2018. (Photo by Omar Sobhani/Reuters) 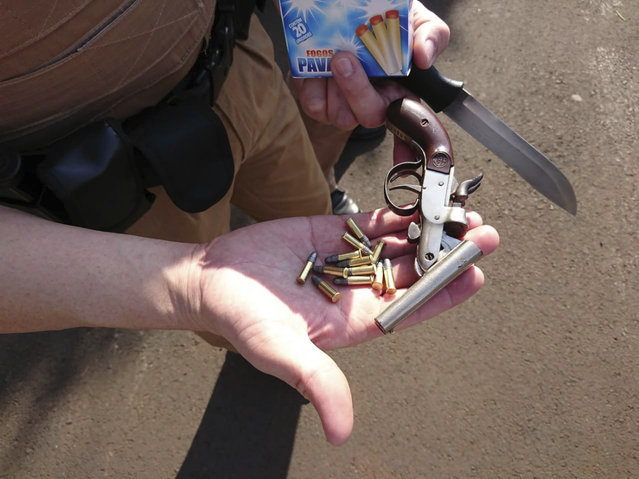 In this photo provided by the news site Guiamedianeira, a police officer shows the a gun used by a teenager that opened fire on students at a school, in Medianeira, Parana state, Brazil, Friday, September 28, 2018. The teenager opened fire leaving two students injured, authorities said. In a statement, the state's secretary of education said the shooter and another teen who was with him had been taken into custody. (Photo by Arildo Kehl/Guiamedianeira via AP Photo) 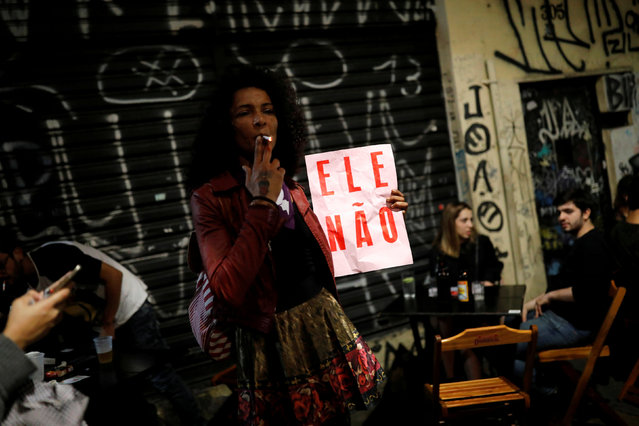 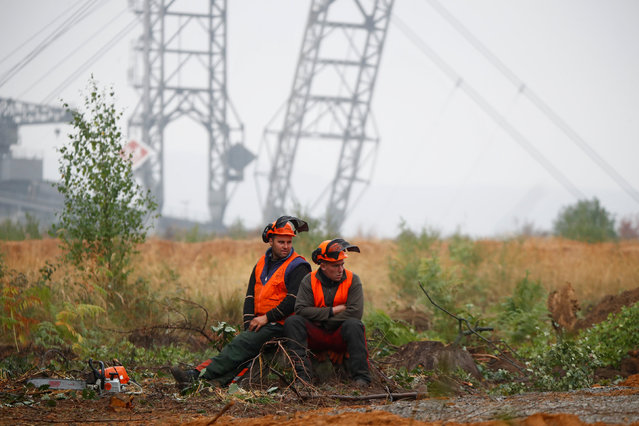 Two lumberjacks of German utility and power supplier RWE rest on a tree stump as a brown coal excavator of the Hambach open cast mining of RWE is seen behind them next to the forest “Hambacher Wald” where activists are cleared from their tree house camp by German special police forces near Kerpen-Buir next to Cologne, Germany, September 28, 2018. (Photo by Wolfgang Rattay/Reuters) 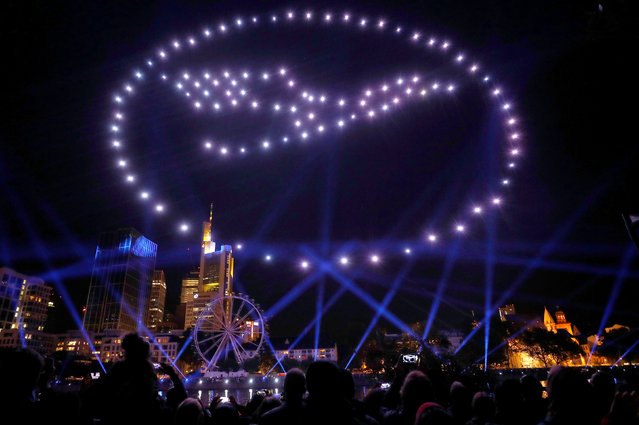 The skyline with its financial district is illuminated by drones forming the logo of German air carrier Lufthansa during an art installation celebrating the opening of the re-built old town in Frankfurt, Germany, September 29, 2018. (Photo by Kai Pfaffenbach/Reuters) 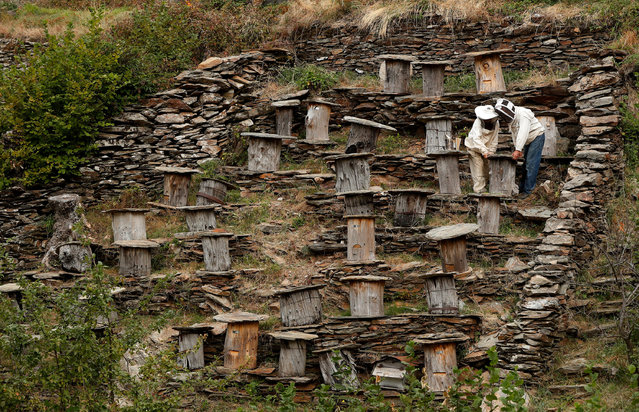 Bee keeper inspect an apiary trunk, in the hamlet Saint Maurice de Ventalon, near Pont de Montvert, southern France, 18 September 2018. Producing high quality honey, black bees are present in western Europe since 20,000 years. Now a victim of massive importation of other bees and resulting hybridization, they are threatened with extinction. People in the Black Bee valley of the Cevennes National Park try to build again a favorable landscape to pollinators. (Photo by Guillaume Horcajuelo/EPA/EFE) 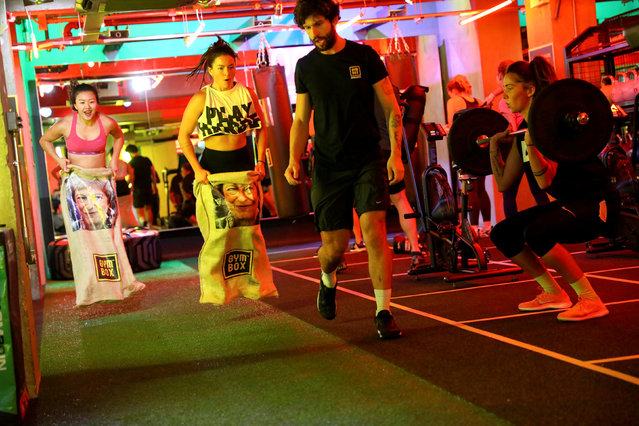 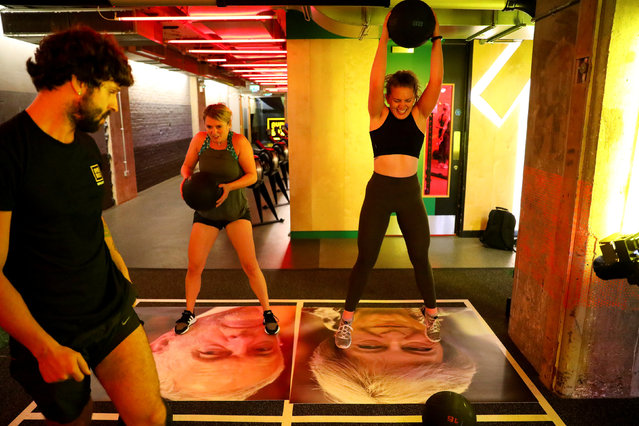 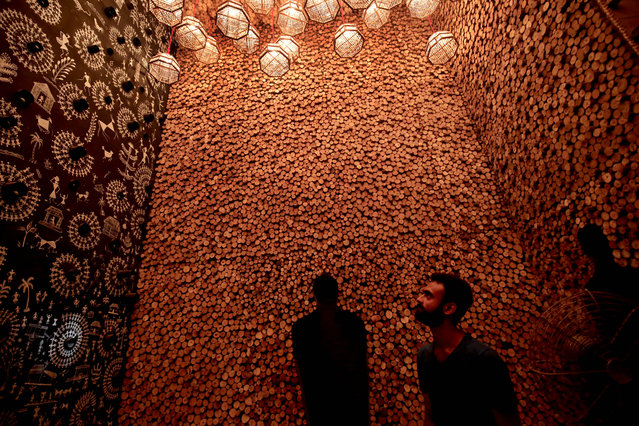 Indian artists work on a makeshift pandal made with wood, fiber, metal and bamboo by artist Anirban Das in Kolkata, Eastern India, 23 September 2018. Bengalis all over the world will be marking the festival representing the victory of good over evil and the celebration of female power from 15 to 19 th October 2018. (Photo by Piyal Adhikary/EPA/EFE) 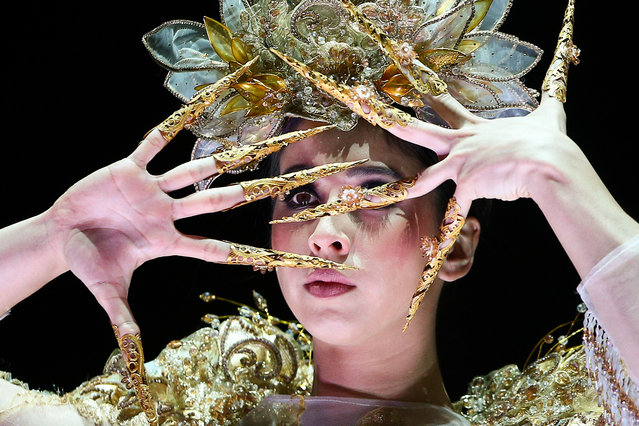 “Shine” by Alina Garcia of Macao is modelled in the Reflective Surfaces Section during the World of WearableArt Opening Night 2018 at TSB Bank Arena on September 27, 2018 in Wellington, New Zealand. (Photo by Hagen Hopkins/Getty Images for World of Wearable Art) 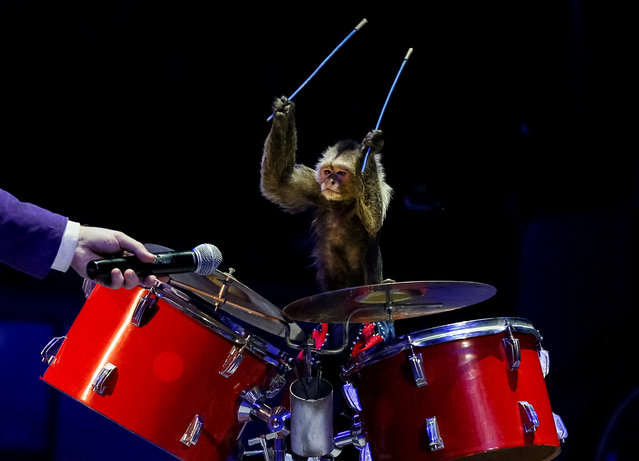 A monkey performs during the presentation of the new show “The Show of the Giant Fountains” at the National Circus in Kiev, Ukraine September 27, 2018. (Photo by Gleb Garanich/Reuters) 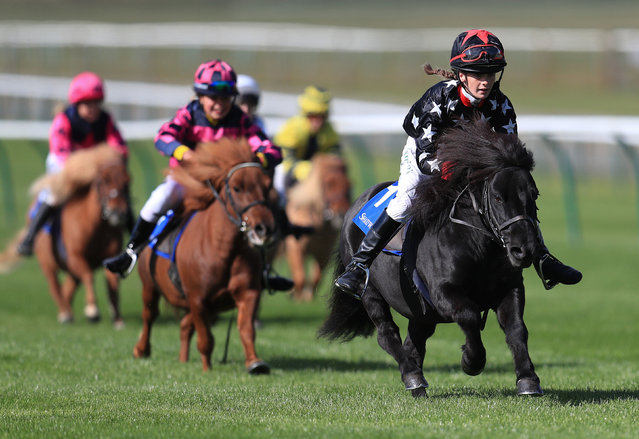