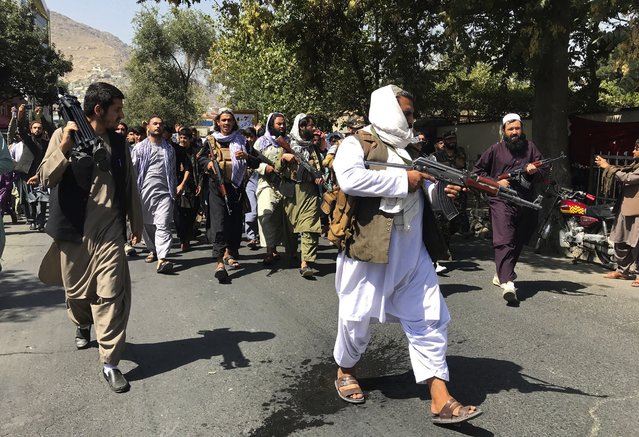 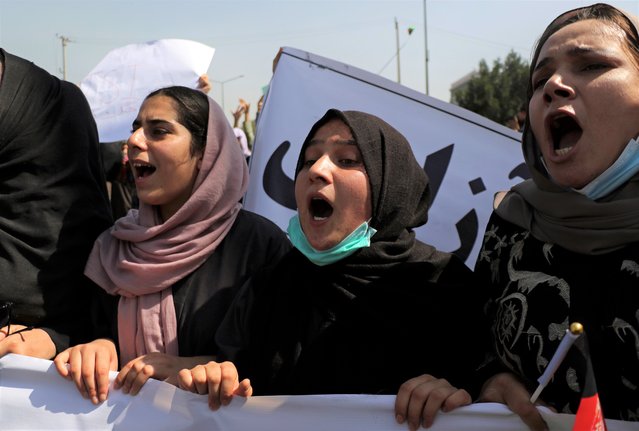 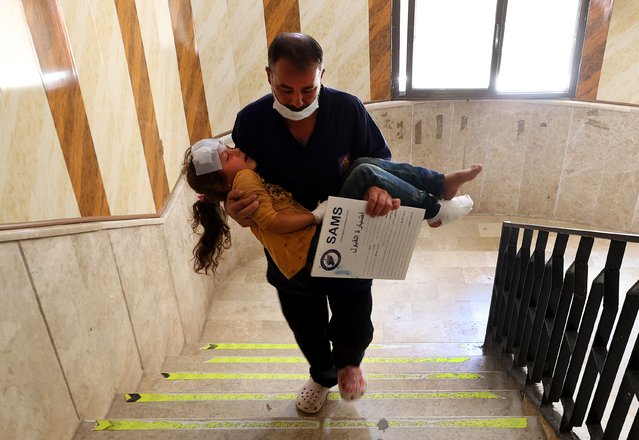 A man carries a girl that was injured during aerial bombardment at a make-shift camp for displaced Syrians, along a stairway in a hospital in the atby town of Maaret Misrin in the north of Syria's rebel-held Idlib province on September 7, 2021. (Photo by Omar Haj Kadour/AFP Photo) 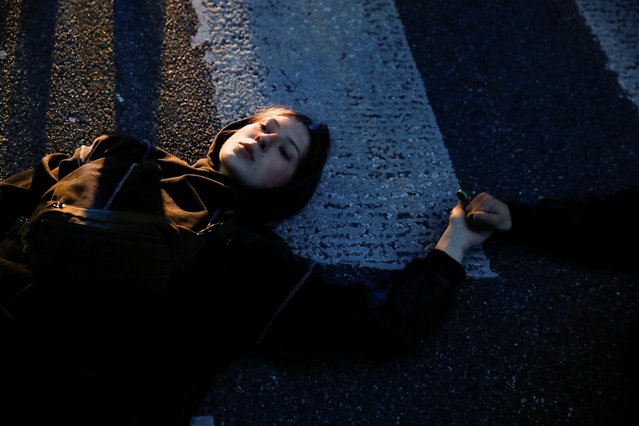 People lie on the ground during a protest against the state of emergency declared at the Polish border with Belarus, in front of the Parliament in Warsaw, Poland on September 6, 2021. (Photo by Kacper Pempel/Reuters) 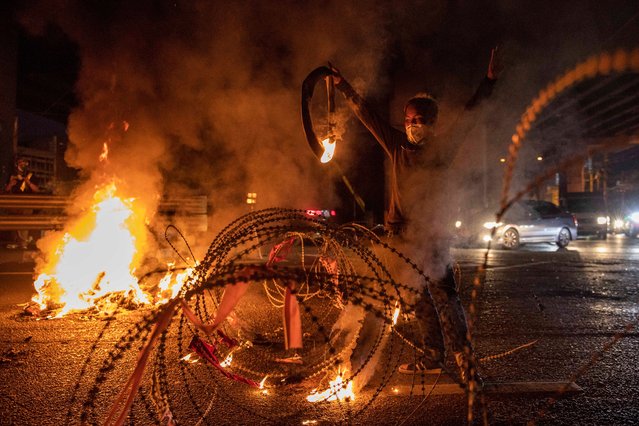 Thai anti-government activists light tires on fire during at the Din Daeng Intersection during a rally on September 06, 2021 in Bangkok, Thailand. Anti-government protesters have continued to hold rallies for weeks, often clashing with police, despite Covid-19 cases remaining at record highs. (Photo by Lauren DeCicca/Getty Images) 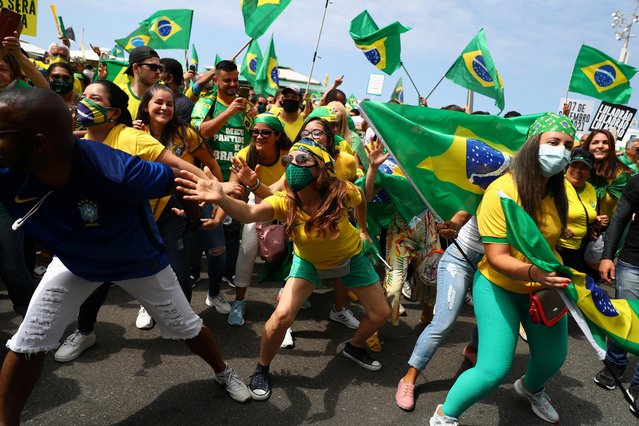 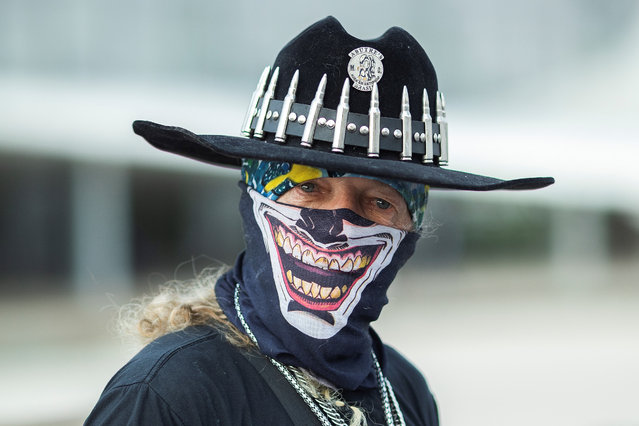 upporters of the President of Brazil, Jair Bolsonaro, demonstrate in front of the Planalto Palace, in Brasilia, Brazil, 06 September 2021. Brazilian President Jair Bolsonaro and the extreme right have called for demonstrations for 'freedom' against Congress and the Supreme Court, which many fear could lead to the 'coup' that the most radical conservatives demand of Bolsonaro. (Photo by Joedson Alves/EPA/EFE) 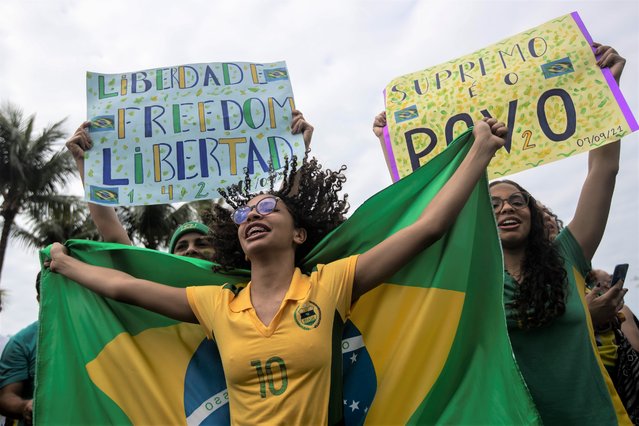 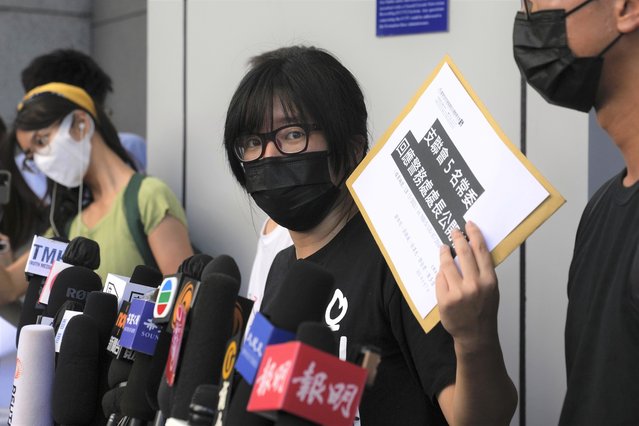 Chow Han Tung, vice chairwoman of the Hong Kong Alliance in Support of Patriotic Democratic Movements of China, speaks to media before delivering a letter to the police to reject their information request at the police headquarters in Hong Kong, Tuesday, September 7, 2021. The group said the Hong Kong government is arbitrarily labeling pro-democracy organizations as foreign agents so they can be prosecuted under a tough national security law, Tuesday. (Photo by Kin Cheung/AP Photo) 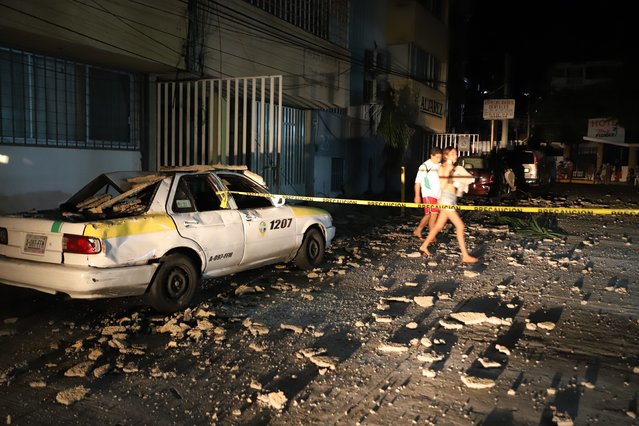 A couple walks past a taxi cab that was damaged by falling debris after a strong earthquake in Acapulco, Mexico, Tuesday, September 7, 2021. The quake struck southern Mexico near the resort of Acapulco, causing buildings to rock and sway in Mexico City nearly 200 miles away. (Photo by Bernardino Hernandez/AP Photo) 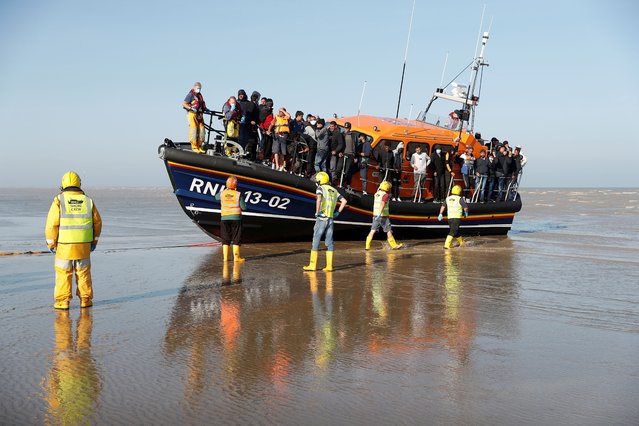 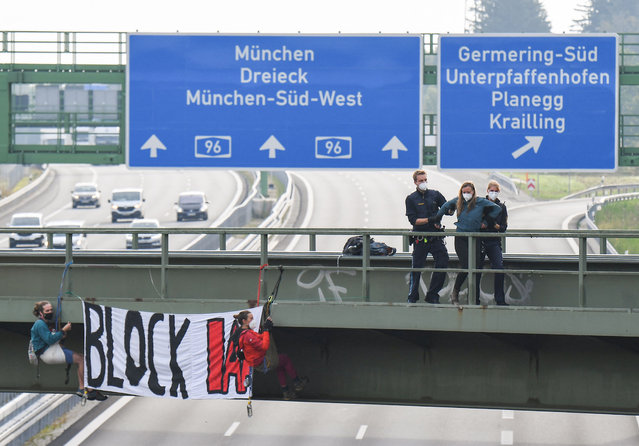 Police detain a climate activist of Extinction Rebellion who were abseiling from a bridge over a motorway near Munich with a banner reading “Block IAA” in order to block the access to the International Motor Show (IAA) held in Munich, southern Germany, on September 7, 2021. Germany's revamped IAA auto show, one of the world's largest, officially opened in Munich for a celebration of all things car-related, but climate concerns and pandemic woes threaten to spoil the party. (Photo by Tobias Schwarz/AFP Photo) 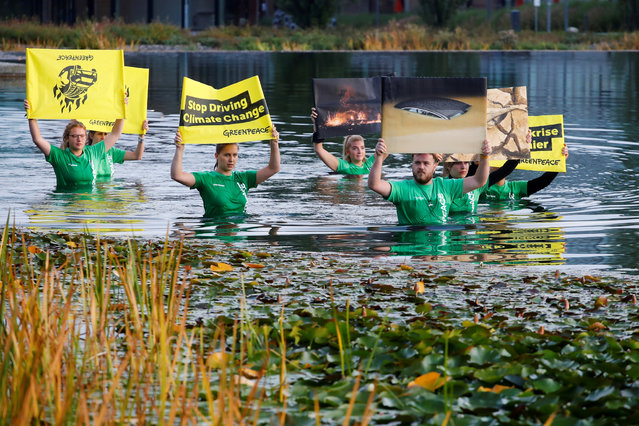 Greenpeace activists protest in a lake ahead of the Munich Motor Show IAA Mobility 2021 in Munich, Germany, September 7, 2021. (Photo by Wolfgang Rattay/Reuters) 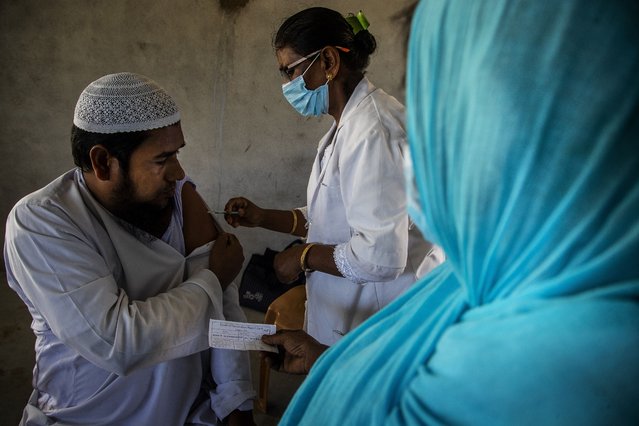 A health worker administers the vaccine for COVID-19 in Khola Bhuyan village on the outskirts of Gauhati, India, Tuesday, September 7, 2021. (Photo by Anupam Nath/AP Photo) 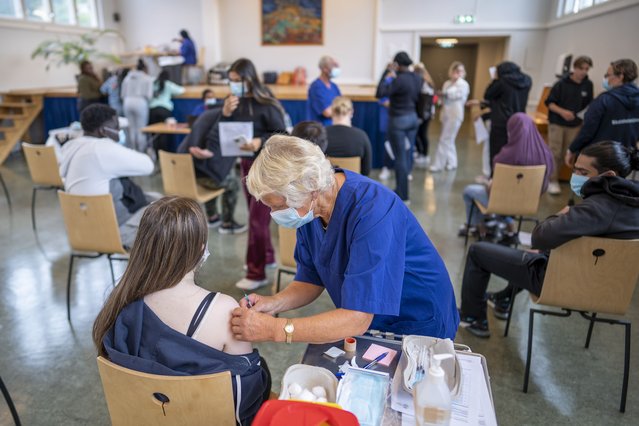 A student at Holtet high school receives the first dose of Pfizer vaccine against COVID-19 in the school's auditorium in Oslo, Tuesday, September 7, 2021. Vaccination of teenagers has started some places in Norway. (Photo by Heiko Junge/NTB via AP Photo) 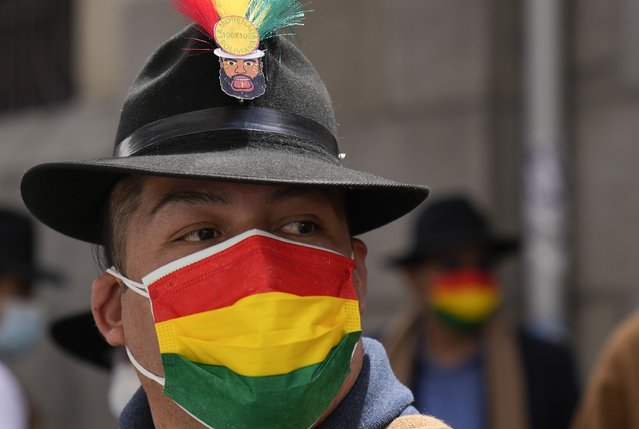 A performer wears a mask with a Bolivian flag motif, due to the COVID-19 pandemic, as he dances on the National Day of the Morenada Dance in La Paz, Bolivia, Tuesday, September 7, 2021. La Morenada is a folk dance from the Andes that was inspired by slaves brought to the region during the colonial era. (Photo by Juan Karita/AP Photo) 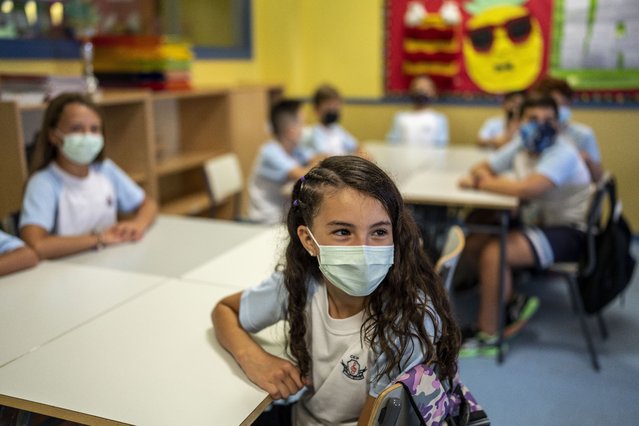 Pupils wearing a face mask to protect against the spread of coronavirus attend a class at Maestro Padilla school as the new school year begins, in Madrid, Spain, Tuesday, September 7, 2021. Around 8 million children in Spain are set to start the new school year. (Photo by Manu Fernandez/AP Photo) 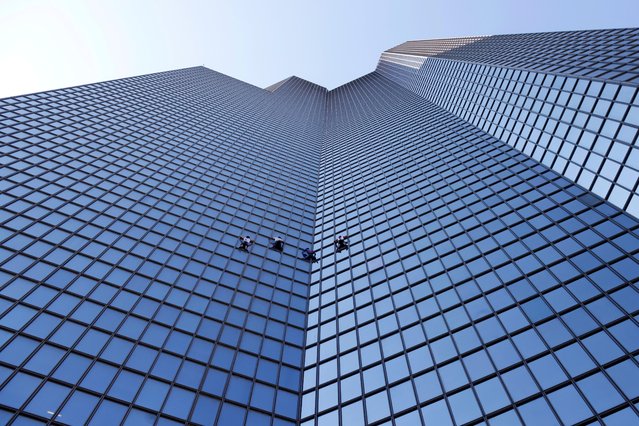 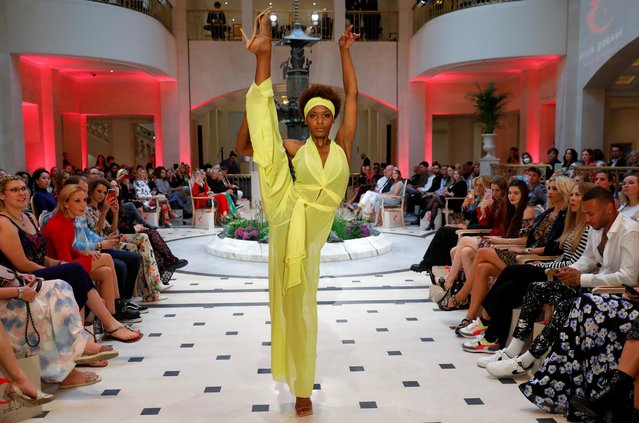 A model presents a creation by designer Anja Gockel during the Fashion Week in Berlin, Germany, September 7, 2021. (Photo by Michele Tantussi/Reuters) 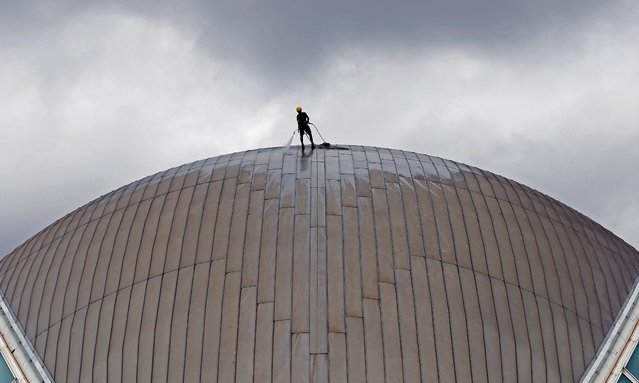 A worker cleans the dome of the Hermisferic of the City of Arts and Sciences in Valencia, Spain, 07 September 2021. The cultural​ and architectural complex was designed by Santiago Calatrava. (Photo by Juan Carlos Cardenas/EPA/EFE)
Edit Del
08 Sep 2021 08:51:00, post received 0 comments
Publication archive:
←   →
Popular tags:
All tags
Last searches: