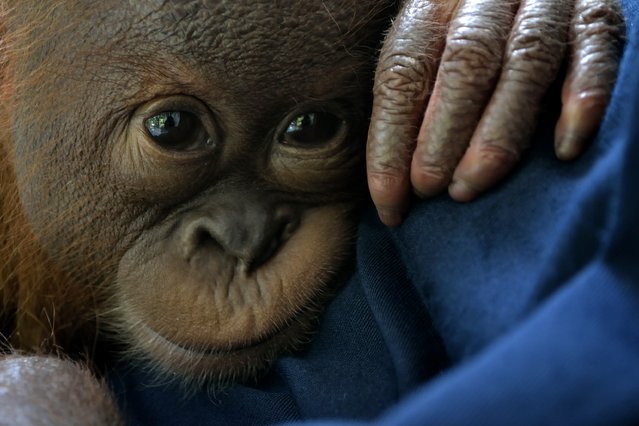 In this photograph taken on April 16, 2014, a rescued baby male Sumatran orangutan named Siboy undergoes rehabiliation at the Sumatran Orangutan Conservation Programme center in Sibolangit district in northern Sumatra island. The orangutan was rescued by Indonesia's ministry of forestry personnel and Orangutan Information Center on April 15, 2014 in nearby Langkat district in a small patch of forest and agricultural plantation. The center has cared for over 280 orangutans rescued from palm oil plantations, poachers and pet owners and over 200 have been reintroduced in the wilds. The critically-endangered primates population are dwindling rapidly due to poaching and rapid destruction of their forest habital that is being converted into palm oil plantation. (Photo by Sutanta Aditya/AFP Photo) 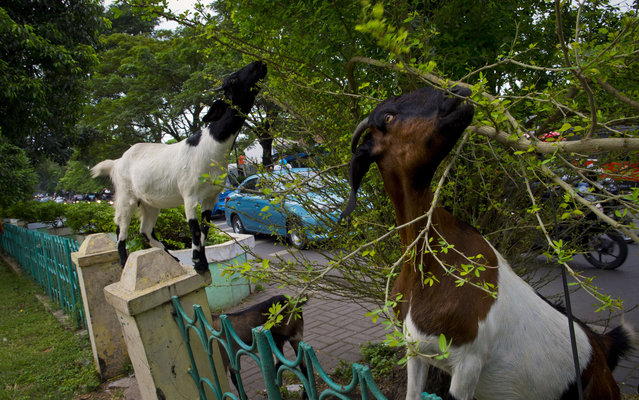 Goats feed on a tree in Manggarai park in the Indonesian capital city of Jakarta on April 15, 2014. Experts urged the government to develop more public parks, to balance the city's ecosystem with its limited park and its increasing population, compounded by urban congestion and worsening traffic problems. (Photo by Romeo Gacad/AFP Photo) 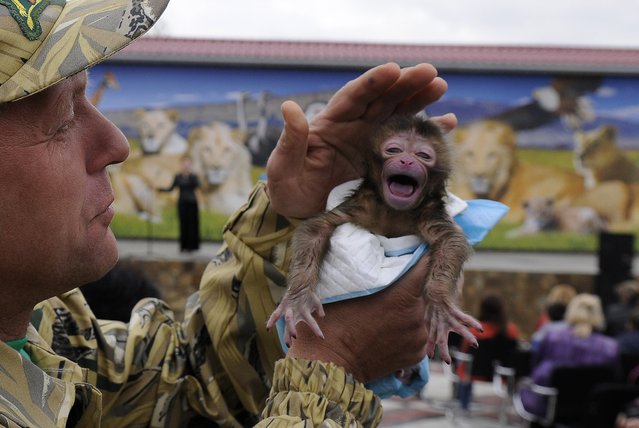 Taigan Safari Park director Oleg Zubkov holds a newly born Japanese macaque monkey in the Taigan Safari Park, about 50 km (31 miles) east of Simferopol, Crimea, Saturday, April 12, 2014. The Taigan Safari Park, created in 2012, is home to some 50 lions and a unique attraction in Eastern Europe. Visitors have the opportunity to see lions on the range as the park is equipped with special observation decks with total length of one kilometer. They allow admiring the lions from safe distance. Taigan has also a mini-zoo and a stationary zoo, where different animals and birds live. (Photo by Alexander Polegenko/AP Photo) 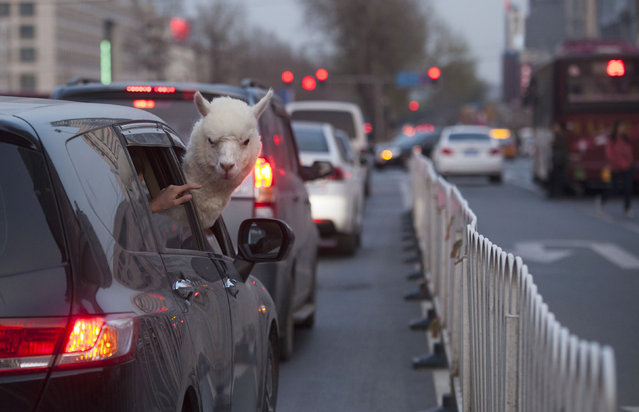 An alpaca looks out from a car on a busy street in Changchun, Jilin province April 16, 2014. According to local media, a newly-opened bar in Changchun rented the 5-year-old male alpaca from Australia hoping to attract more customers. (Photo by Reuters/China Daily) 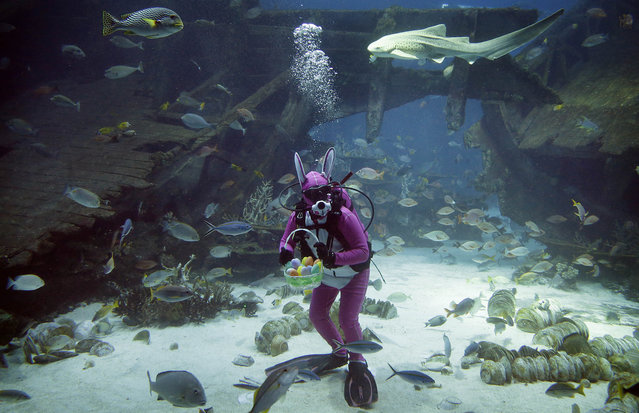 A diver dressed as the Easter Bunny swims among sharks, rays and other species of fish in the Shipwreck habitat, Thursday, April 17, 2014 at the South East Asia Aquarium of Resorts World Sentosa, a popular tourist attraction in Singapore. The performance is part of the Easter celebrations.(Photo by Wong Maye-E/AP Photo) 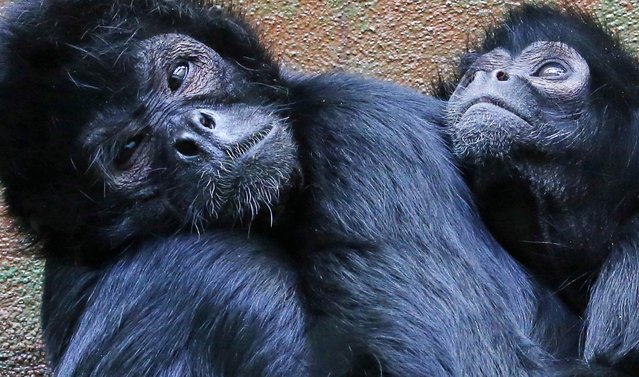 Two brown-headed spider monkeys are pictured at the zoo in Antwerp April 11, 2014. (Photo by Yves Herman/Reuters) 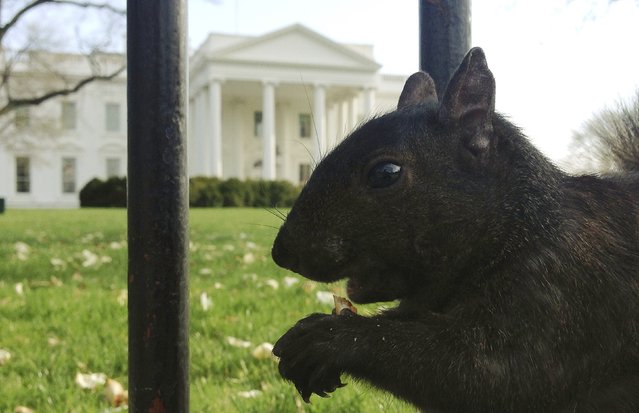 A squirrel eats a piece of cracker dropped by a tourist at the north fence of the White House in Washington, April 11, 2014. (Photo by Jim Bourg/Reuters) 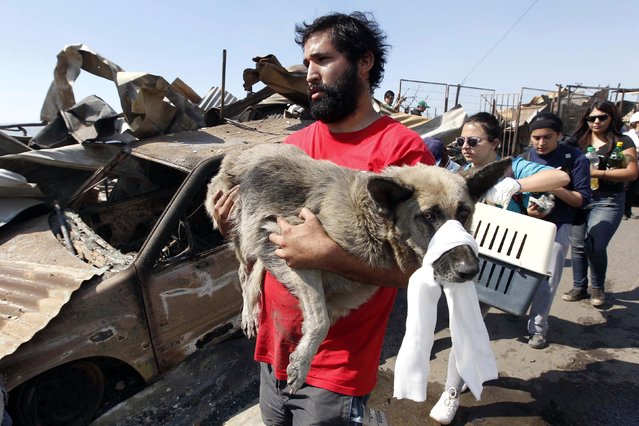 A resident carries an injured dog at the location where a forest fire burned several neighbourhoods in the hills in Valparaiso city, northwest of Santiago, April 13, 2014. At least 11 people were killed and 500 houses destroyed over the weekend by a fire that ripped through parts of Chilean port city Valparaiso, as authorities evacuated thousands and used aircraft to battle the blaze. (Photo by Eliseo Fernandez/Reuters) 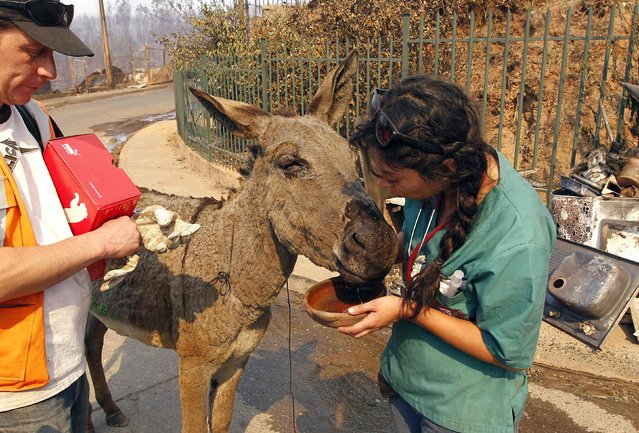 A volunteer gives a donkey water at the location where a forest fire burned several neighbourhoods in the hills in Valparaiso city, northwest of Santiago, April 13, 2014. (Photo by Eliseo Fernandez/Reuters) 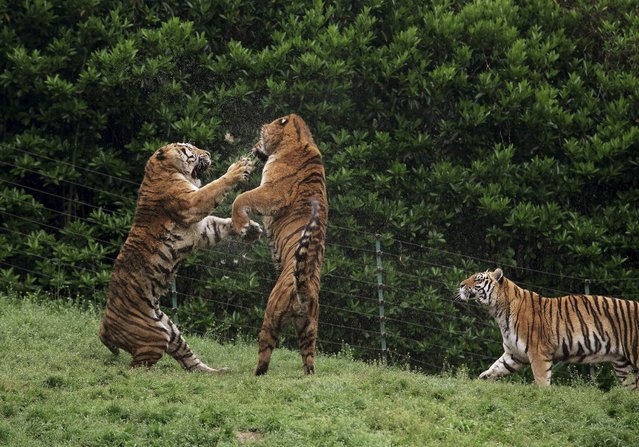 Tigers fight at a zoo in Yangzhou, Jiangsu province April 12, 2014. (Photo by Reuters/Stringer) 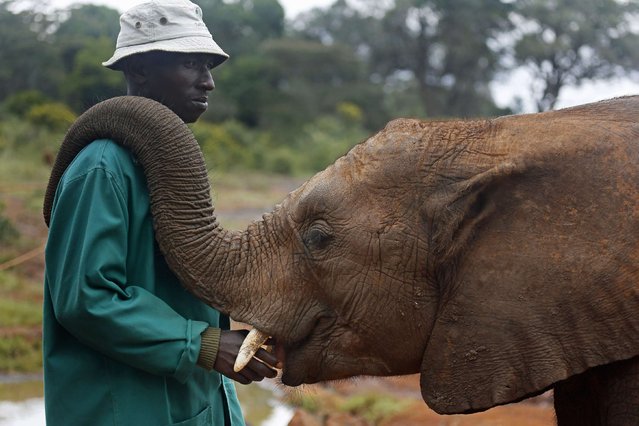 A keeper interacts with an orphaned elephant during feeding time at the David Sheldrick Wildlife Trust in Nairobi National Park, near Nairobi, Kenya, on April 17, 2014. (Photo by Reuters) 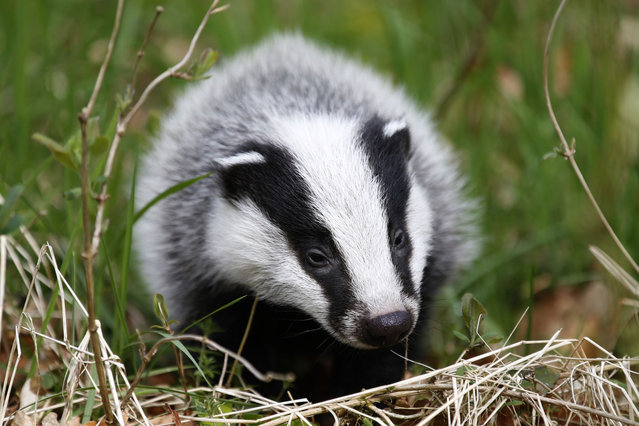 A badger walks in woodland in Perthshire, Scotland April 17, 2014. (Photo by Russell Cheyne/Reuters) 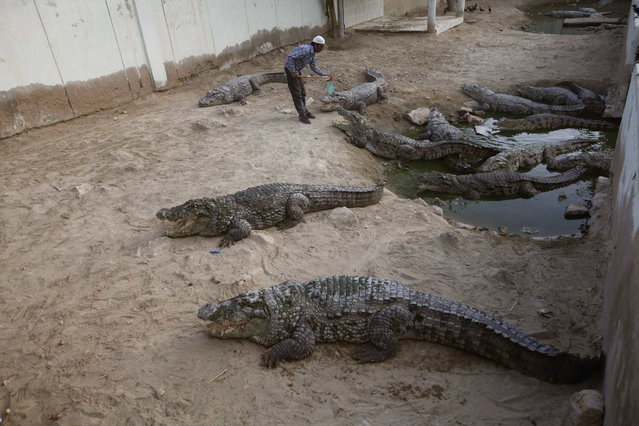 A man feeds pieces of meat offered by devotees to crocodiles at the Manghopir Sufi saint shrine on the outskirts of Karachi April 17, 2014. Visitors and devotees go to the shrine to pay respect to the Sufi saint, Pir Haji Syed Sakhi Sultan and to feed the crocodiles, as a tribute to the divine. (Photo by Athar Hussain/Reuters) 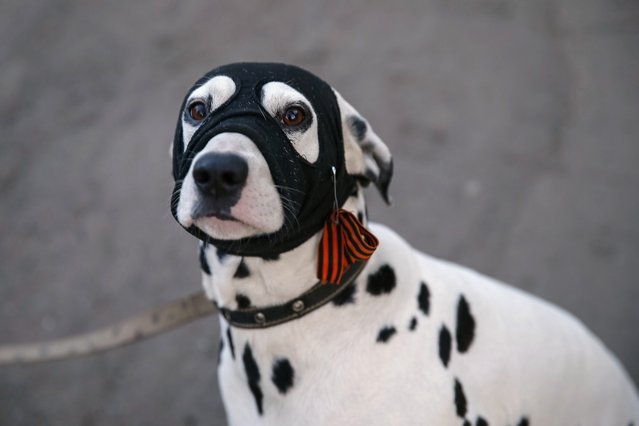 A dog wearing a face mask with black and orange ribbons of St. George – a symbol widely associated with pro-Russian protests in Ukraine, is seen in Slavyansk April 18, 2014. Armed pro-Russian separatists in eastern Ukraine said on Friday they were not bound by an international deal ordering them to disarm and would not move out of public buildings they have seized until the Kiev government stepped down. (Photo by Gleb Garanich/Reuters) 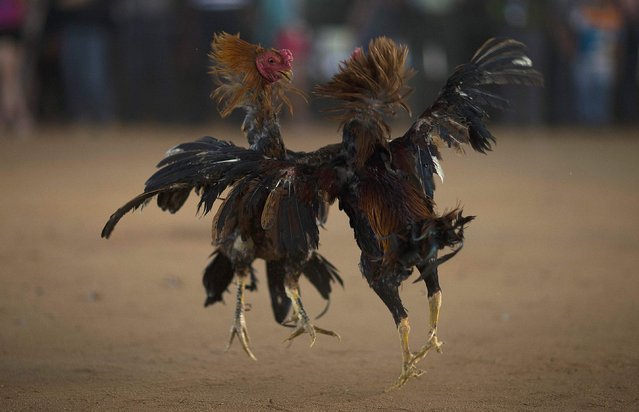 Roosters jump as they fight during a celebration for the New Year of the Dai minority in Xishuangbanna, Yunnan province April 13, 2014. Sunday marked the beginning of the 1,376th New Year, according to the ethnic Dai minority calendar. (Photo by Wong Campion/Reuters) 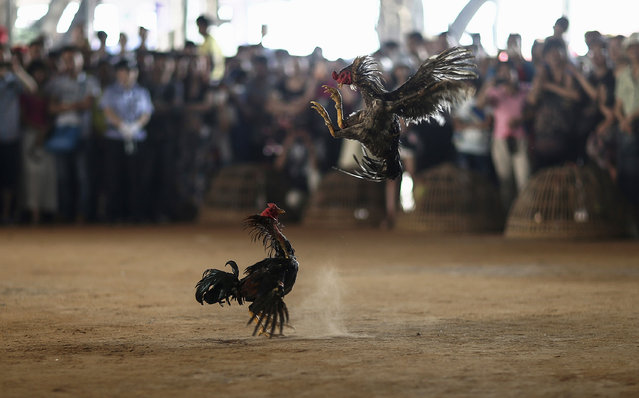 People watch roosters fight during a celebration for the New Year of the Dai minority in Xishuangbanna, Yunnan province April 13, 2014. Sunday marked the beginning of the 1,376th New Year, according to the ethnic Dai minority calendar. (Photo by Wong Campion/Reuters) 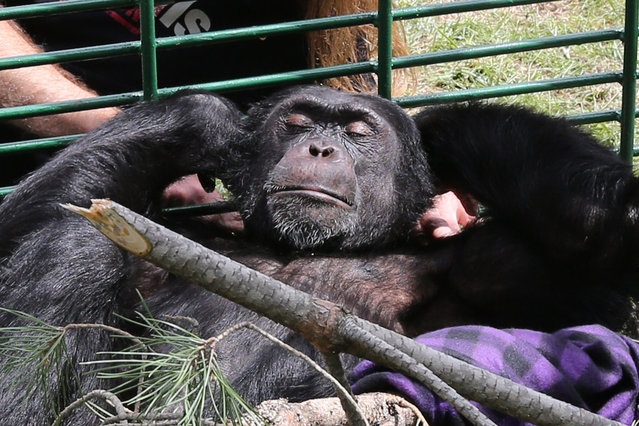 Charlie the chimpanzee, rests in his cage on April 14, 2014, in the town of Aley in Mount Lebanon, southeast of Beirut, after being confiscated from a zoo on April 12, and placed in Animals Lebanons care. Charlie, nine-years-old, was smuggled into Lebanon in 2005 and sold from a pet shop before ending up in Animal City zoo. The Ministry of Agriculture declared in 2006 that he was brought into the country without a legal permit for his importation. An attempted confiscation in early 2006 failed after the zoo removed the chimp the day before the action was to take place. Today he is in the care of Animals Lebanon which recently took up the case to free him. (Photo by Anwar Amro/AFP Photo) 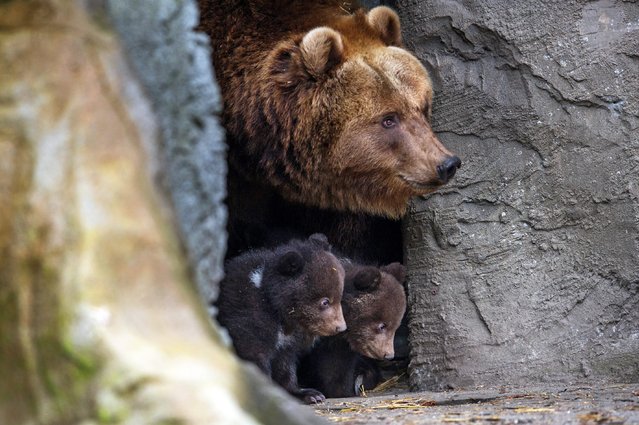 Brown bear Mascha and her cubs peek out a cave at Hagenbeck zoo in Hamburg, Germany, 11 April 2014. The zoo will perform the stocktaking later the day. (Photo by Maja Hitij/EPA) 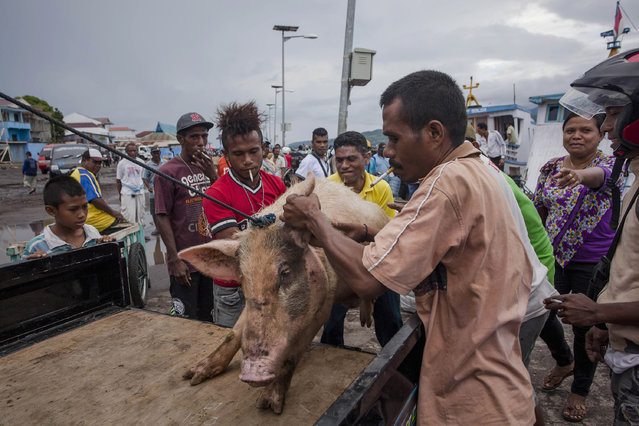 Catholic worshippers carry a pig from a wooden boat on their way to attend Holy Week celebrations, known as “Semana Santa” on April 17, 2014 in Larantuka, East Nusa Tenggara, Indonesia. Easter celebrations in Larantuka started in the 16th century, when Portuguese missionaries entered and acculturated the local people. The ritual appeals to the pilgrims and people from various regions in Indonesia, who come to follow the procession. Holy Week marks the last week of Lent and the beginning of Easter celebrations. Catholics make up approximately three percent of the population of the predominantly Muslim country. (Photo by Ulet Ifansasti/Getty Images) 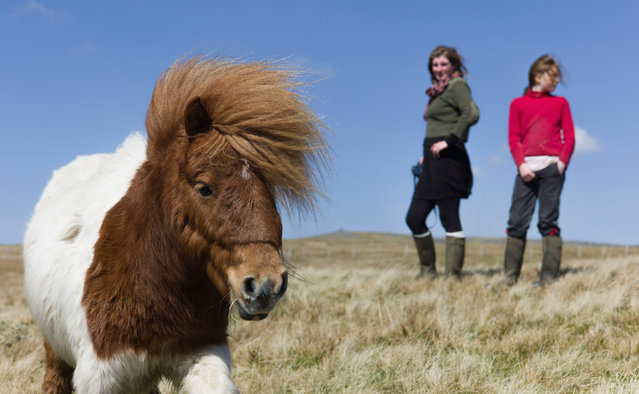 Yorkshire shepherdess Amanda Owen and her daughter, Raven, 13, head onto the moors to feed the horses at Amanda's farm Ravenseat on April 15, 2014 near Kirkby Stephen, England. Amanda Owen runs a 2,000 acre working hill farm in Swaledale which is one of the remotest areas on the North Yorkshire Moors. Working to the rhythm of the seasons the farm has over 900 Swaledale sheep that are now entering the lambing season as well as cattle and horses. (Photo by Ian Forsyth/Getty Images) 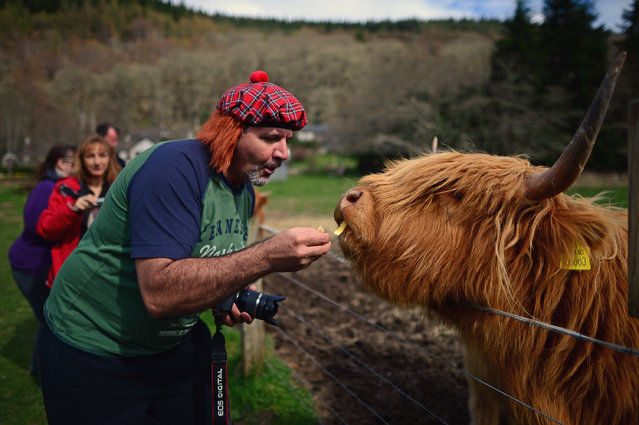 A man feeds a Highland cow in a field at Invermoriston on April 16, 2014 in Scotland. A referendum on whether Scotland should be an independent country will take place on September 18, 2014. (Photo by Jeff J. Mitchell/Getty Images) 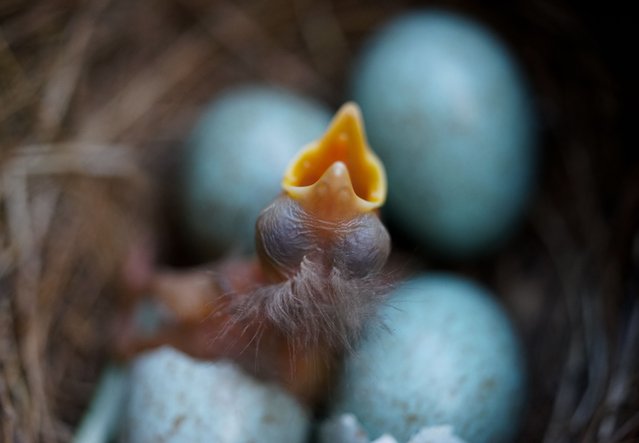 A newly hatched blackbird chick opens his beak alongside three other eggs in a nest in Frankfurt am Main, western Germany on April 13, 2014. (Photo by Arne Dedert/AFP Photo/DPA) 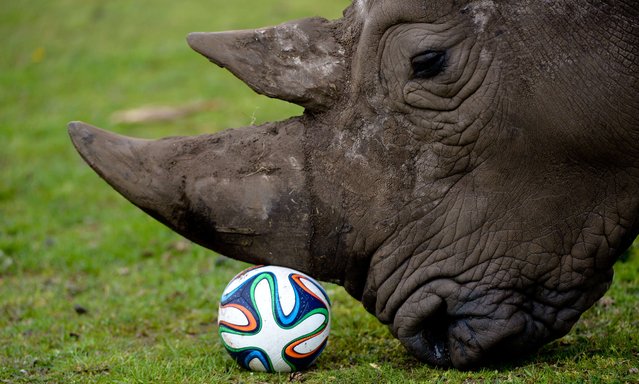 A rhinoceros plays with a football in his enclosure at the Serengeti Park in Hodenhagen, central Germany on April 13, 2014. (Photo by Peter Steffen/AFP Photo/DPA) 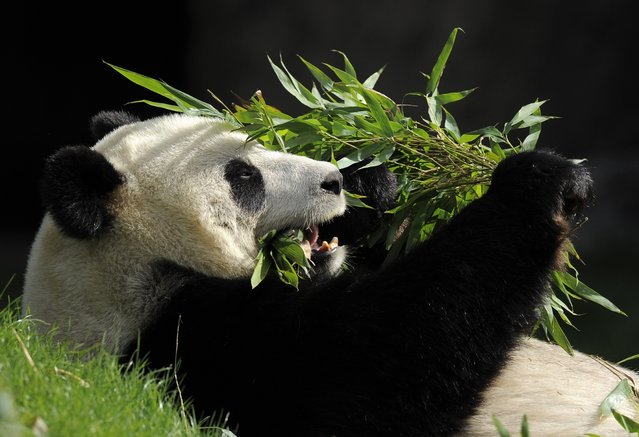 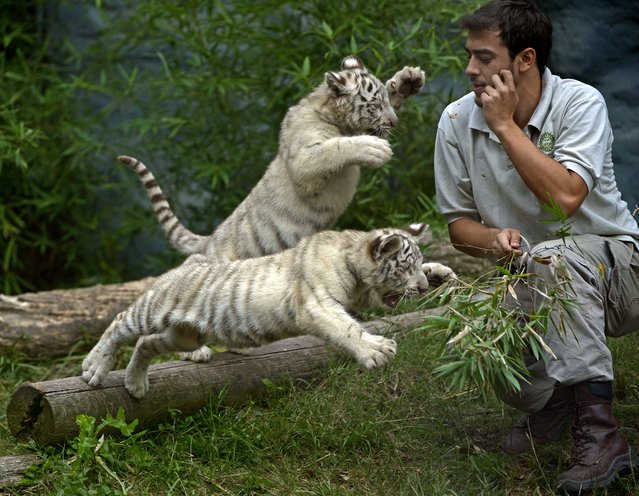