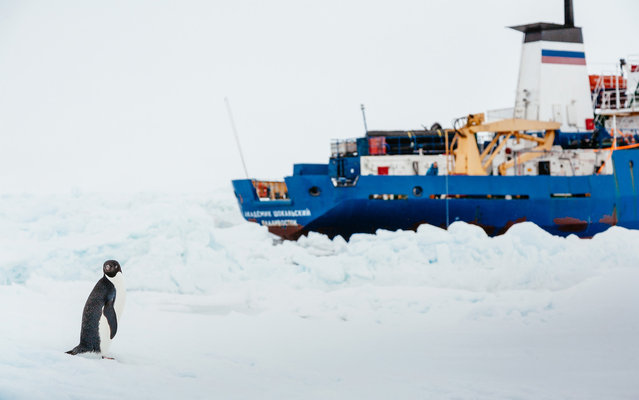 This image taken by expedition doctor Andrew Peacock of www.footloosefotography.com on December 31, 2013 shows an adelie penguin near the MV Akademik Shokalskiy (R), still stuck in the ice off East Antarctica, as the ship waits for a possible helicopter rescue. The icebound Russian research vessel prepared to ring in the New Year in remote Antarctica on December 31 as blizzards hampered a helicopter rescue planned after several icebreaking attempts failed. The ship is carrying scientists and tourists who are following the Antarctic path of explorer Douglas Mawson a century ago, details of which at www.spiritofmawson.com, and have been carrying out the same scientific experiments his team conducted during the 1911-1914 Australian Antarctic Expedition – the first large-scale Australian-led scientific expedition to the frozen continent. (Photo by Andrew Peacock/AFP Photo) 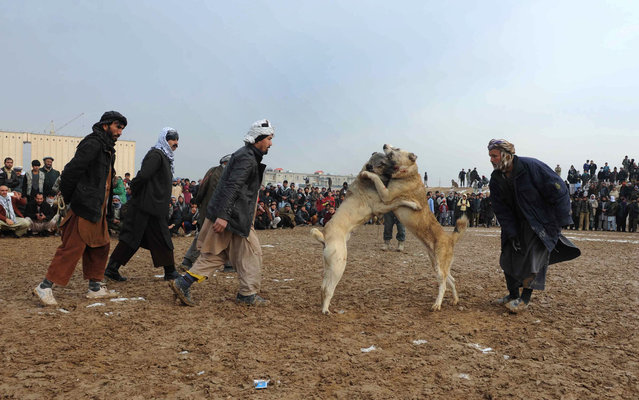 Afghan owners and spectators watch a pair of fighting dogs during the weekly dog fights in Mazar-i-Sharif on January 3, 2014. Dog fighting is held on vacant lots and though betting is done, matches are stopped as soon as one dog shows absolute domination. Dog fighting was banned during the Taliban regime. (Photo by Farshad Usyan/AFP Photo) 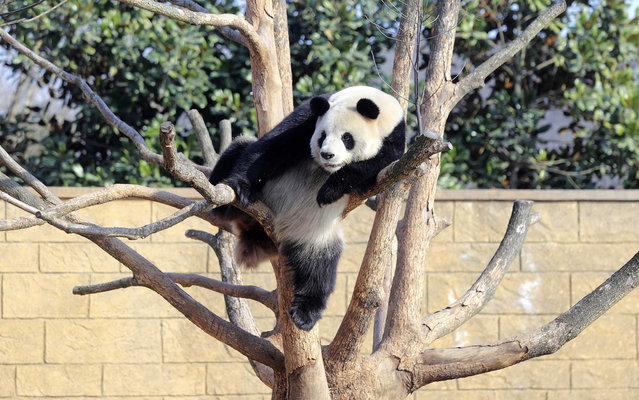 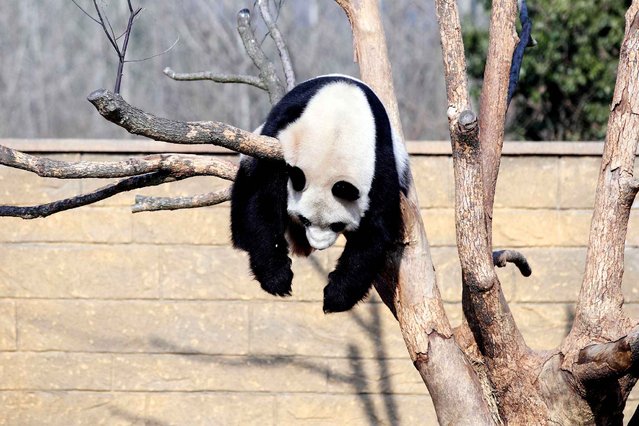 This picture taken on January 1, 2014 shows giant panda “Li Li” sleeping on a tree in Hangzhou Wild Animal World in Hangzhou, east China's Zhejiang province. Giant pandas, notorious for their low s*x drive, are among the world's most endangered animals. Fewer than 1,600 pandas remain in the wild, mainly in China's Sichuan province, with a further 300 in captivity around the world. (Photo by AFP Photo) 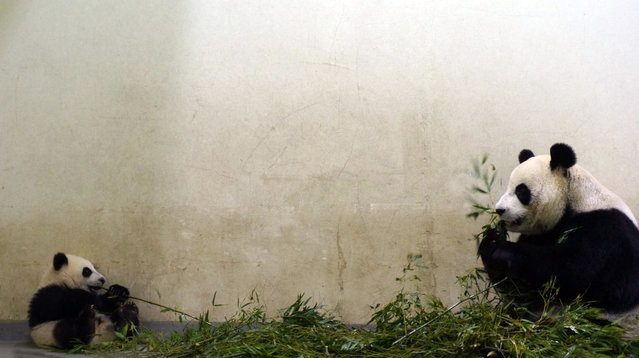 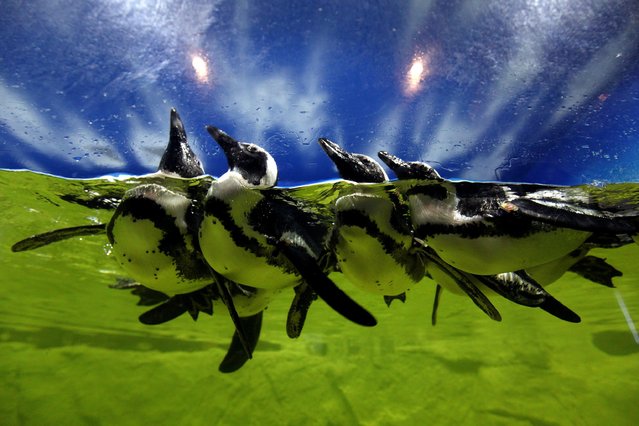 Penguins swim at Times City or Vinpearl City Times Aquarium in Hanoi, Vietnam, December 30, 2013. The aquarium, which is considered the largest aquarium in Vietnam so far, was officially opened on December 24, 2013. (Photo by Luong Thai Linh/EPA) A Nepalese mahout demonstrates his skill with a pachyderm during an elephant beauty pageant at Sauraha in Chitwan, some 150 kms southwest of Kathmandu, during the Chitwan Elephant Festival on December 29, 2013. The ongoing five-day long Chitwan Elephant Festival is celebrated with elephants, horses, and bullock cart races as well as elephant soccer games and an elephant beauty pageant. (Photo by Prakash Mathema/AFP Photo) 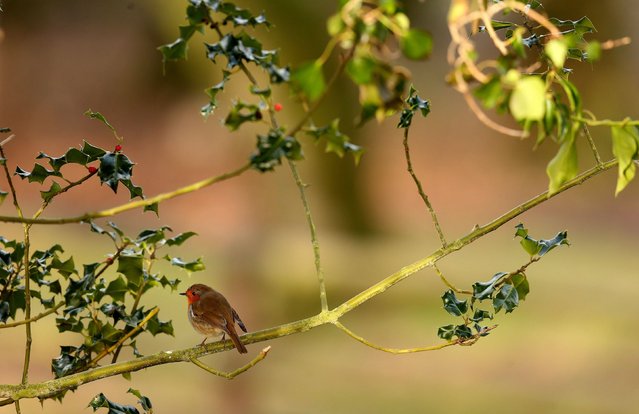 A robin perches in a holly tree at Fota wildlife park in Co. Cork, Ireland, on December 30, 2013. (Photo by Brian Lawless/PA Wire) 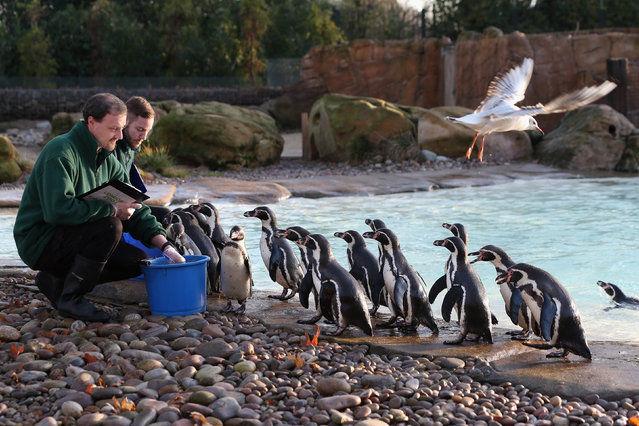 Keepers record the number of penguins during ZSL London Zoo's annual stocktake of animals on January 2, 2014 in London, England. The zoo's annual stocktake requires keepers to check on the numbers of every one of the 800 different animals species held, including every invertebrate, bird, fish, mammal, reptile, and amphibian. (Photo by Oli Scarff/Getty Images) 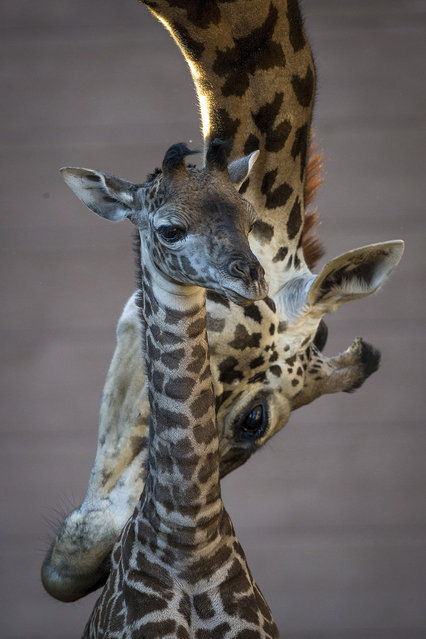 This photo provided by the San Diego Zoo shows Masai giraffe Bahati as she introduces her new calf to the rest of the herd after tenderly grooming her to make sure she was presentable enough to meet the rest of the family, Tuesday, December 31, 2013 in San Diego. The calf was born on December 22 measuring 6 feet 1 inch tall and weighing 157 pounds. Masai giraffes are native to Africa and are threatened in some areas. Bringing species back from the brink of extinction is the mission of San Diego Zoo Global. (Photo by Ken Bohn/AP Photo/San Diego Zoo) 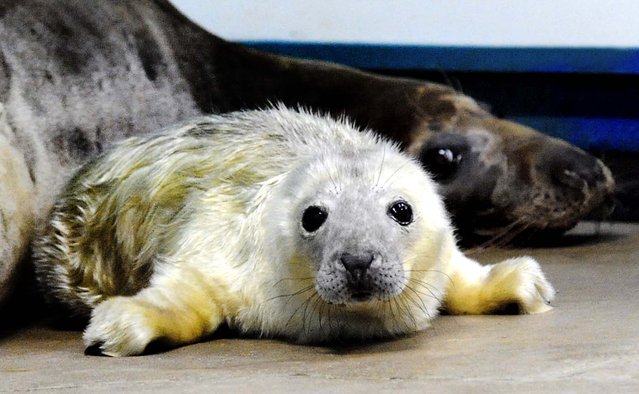 A baby grey seal, on New Year's Day, is seen with his mother, 10-year-old Lily, at the Brookfield Zoo in Brookfield, Illinois, on January 2, 2013. Zoo officials say the pup, who weighs 25 pounds (11,3 kg), is the first of its species to be born at the zoo. (Photo by Chicago Zoological Society) 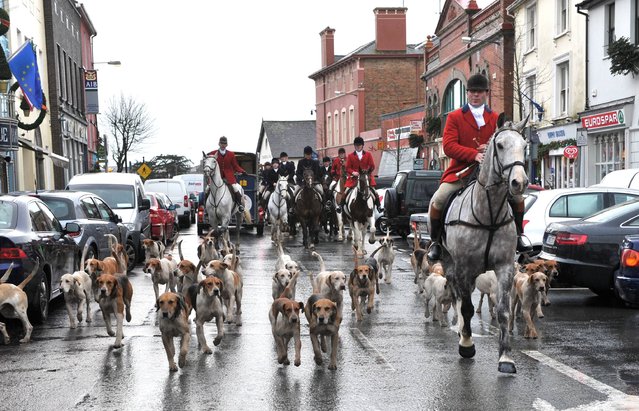 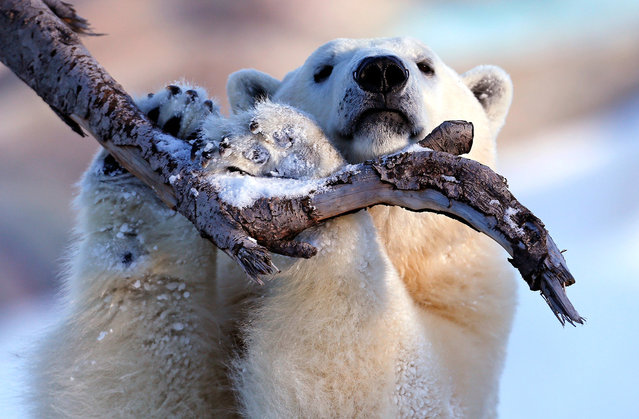 Taiga the polar bear grabs a tree branch at the Quebec Aquarium in Quebec City, December 30, 2013. (Photo by Mathieu Belanger/Reuters) 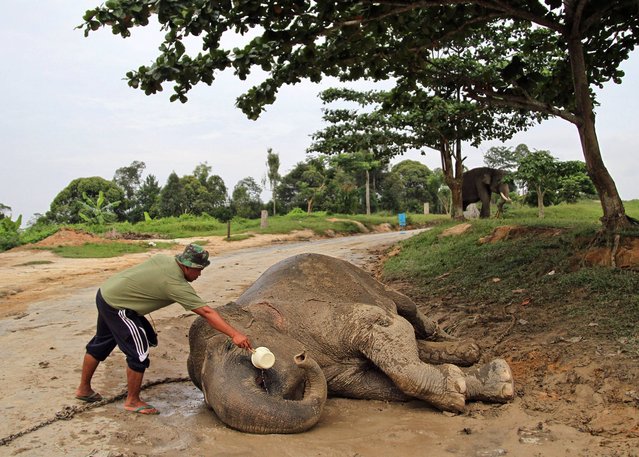 An elephant trainer gives water to a wild Sumatran elephant that has not fully recovered after being tranquilized during its relocation from a populated area in the nearby town to a conservation center in Minas, Riau province, Indonesia, Monday, December 30, 2013. Indonesia's endangered elephants on Sumatra island are threatened by habitat loss and poaching. Less than 3,000 Sumatran elephants are believed to remain in the wild. (Photo by Rony Muharrman/AP Photo) 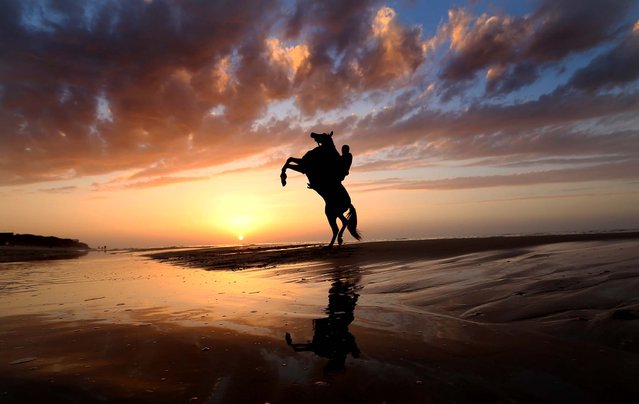 A man rides a horse on the beach as the sun sets in Gaza City, December 28, 2013. (Photo by Hatem Moussa/Associated Press) 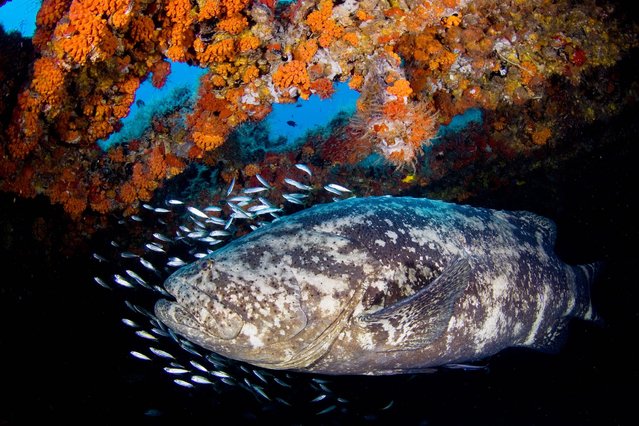 These massive fish look like they mean business as they prowl the ocean bed deep below the waves. (Photo by Jim Abernethy/Solent News & Photo Agency) 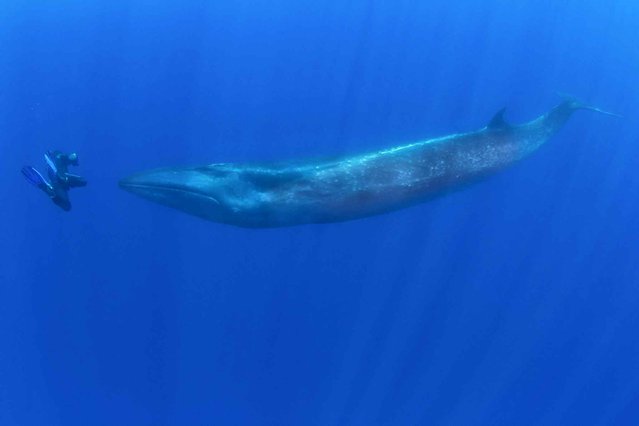 This is the stunning moment a fearless diver came face to face with a 50ft whale. The extraordinary encounter happened as diver Reinhard Mink swam in the sea near the Azores Islands in Portugal. He suddenly found himself just inches away from the Sei whale – one of the fastest whales on the planet, with speeds of up to 40mph. (Photo by Kai Matthes/Caters News/SIPA Press) 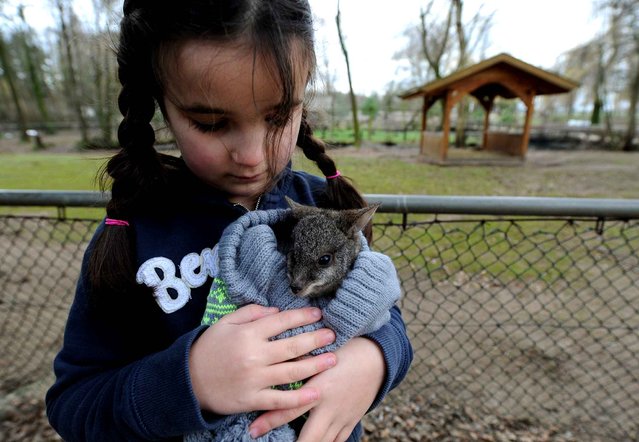 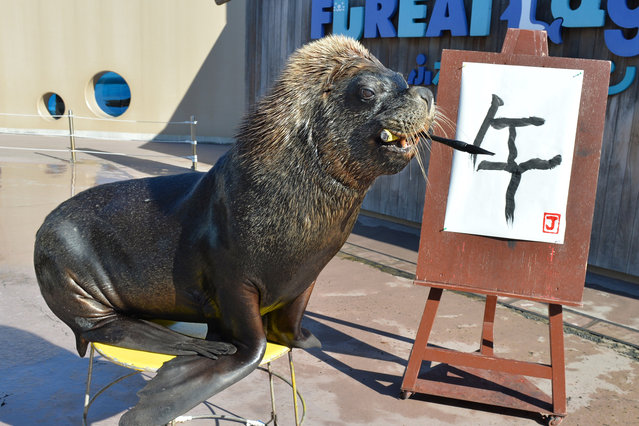 Sea lion “Jay” paints a Chinese character reading “the horse” to practice his calligraphy as part of his New Year's Day attraction at the Hakkeijima Sea Paradise aquarium in Yokohama, suburban Tokyo on December 31, 2013. The event, marking the forthcoming Chinese lunar calender “Year of the Horse”, will be held as part of a New Year's attraction until the end of January. (Photo by Kazuhiro Nogikazuhiro/AFP Photo) 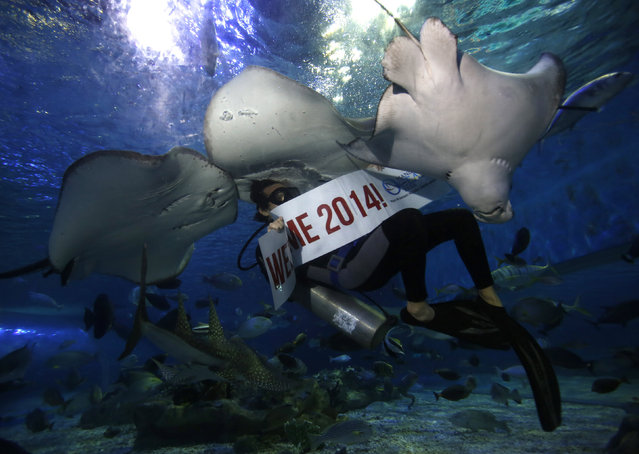 A professional diver holds a “Welcome 2014” banner while swimming with stingrays as part of a show during New Year celebrations inside a large aquarium at a ocean park in Manila December 31, 2013. Neither an earthquake nor a super typhoon have dampened the country's optimism as 94 percent are entering the New Year with hope instead of fear, according to a new survey by pollster Social Weather Stations on Tuesday. (Photo by Romeo Ranoco/Reuters) 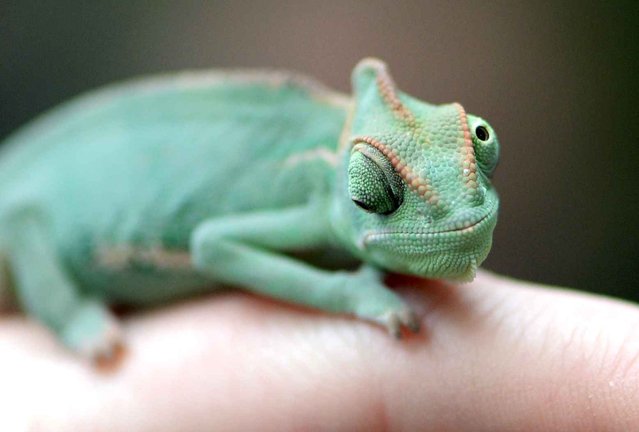 A veiled chameleon, also known as Yemen chameleon, sits on the finger of a keeper during an animal inventory at the Biosphere Potsdam tropical plants and animal park in Potsdam, eastern Germany, on January 2, 2014. (Photo by Ralf Hirschberger/AFP Photo/DPA) 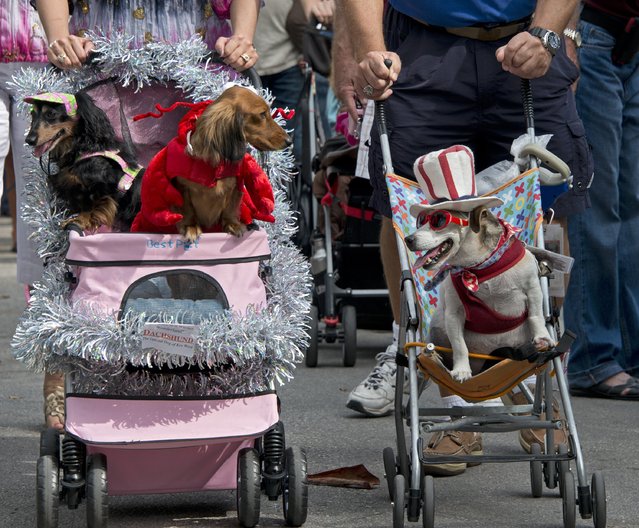