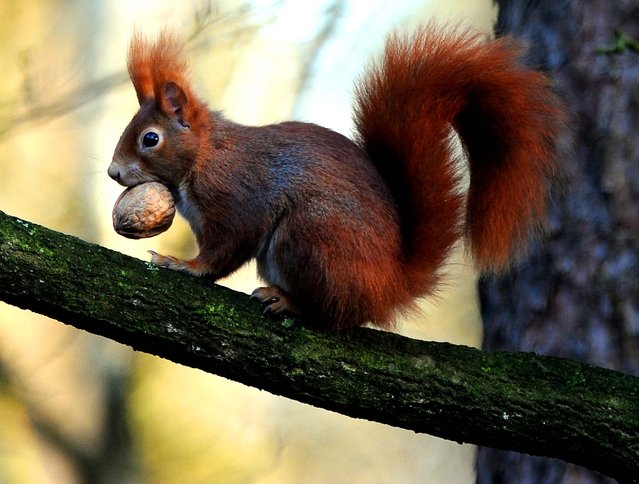 A squirrel with a walnut in its mouth sits on the branch of a tree in Sottrum, Germany, on January 12, 2014. (Photo by Ingo Wagner/DPA) 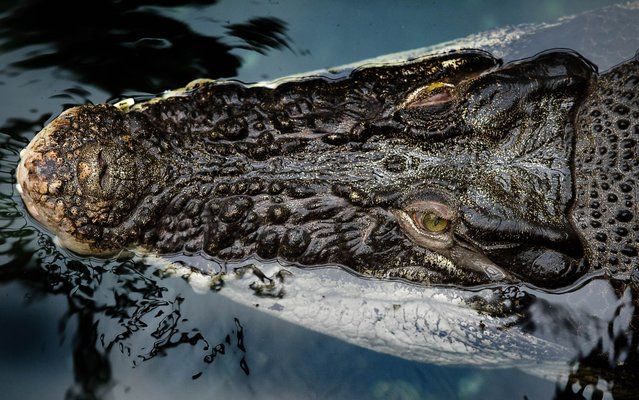 Saltwater crocodile Max swims in a pool during the annual inventory at the zoo in Dresden, Germany, 16 January 2014. All of the zoo's residents are examined and catalogued carefully every year. The sloth weighed 1,400 grams. (Photo by Arno Burgi/AFP Photo) 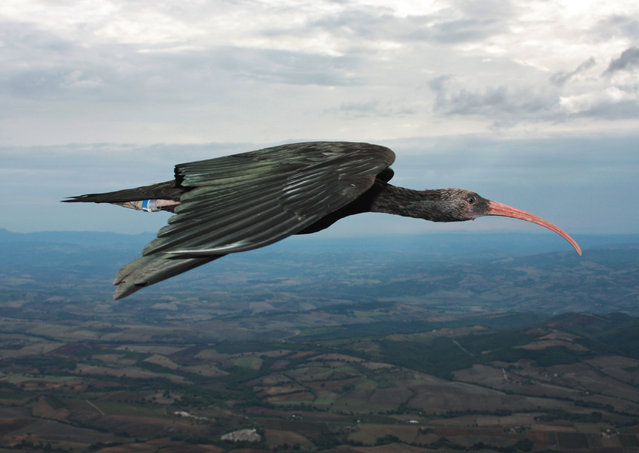 In this undated photo made available by journal Nature on January 15, 2014, a northern bald ibis (Geronticus eremita) flies in Tuscany, Italy. A new study released Wednesday, January 15, 2014 says the birds choreograph the flapping of their wings, getting a boost from an updraft of air in the wake of the flapping wings by flying behind the first bird and off to the side. When a flock of birds take advantage of these aerodynamics, they form a V. (Photo by Markus Unsöld/AP Photo) 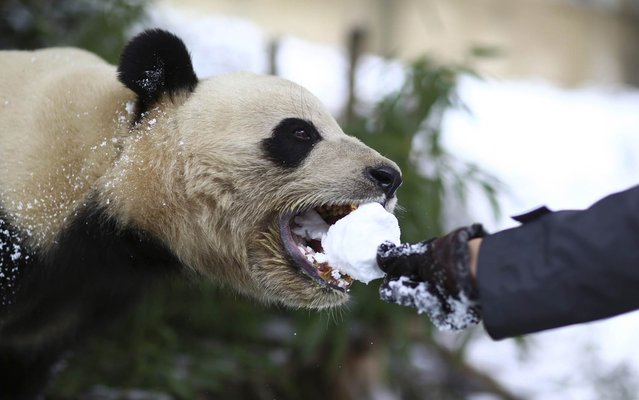 A visitor feeds a giant panda with a snowball at a zoo in Kunming, Yunnan province, January 13, 2014. (Photo by Wong Campion/Reuters) 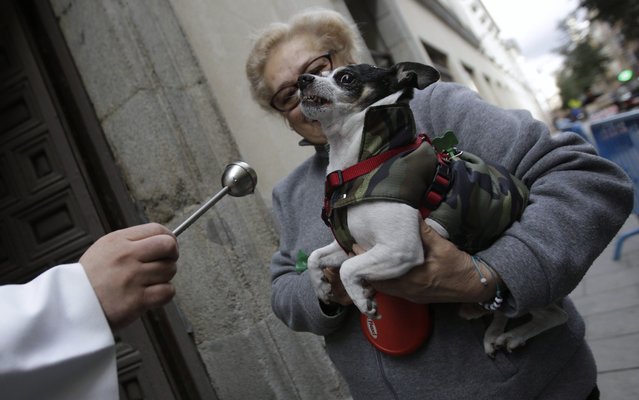 A priest blesses a dog outside Madrid's San Anton Church January 17, 2014. Hundreds of pet owners bring their animals to be blessed every year on the day of San Anton, Spain's patron saint of animals. (Photo by Andrea Comas/Reuters) 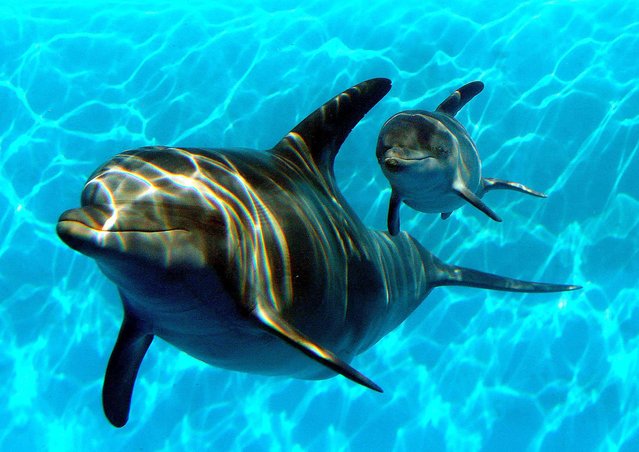 Bella, a Bottlenose Dolphin, swims in a pool with her new calf named Mirabella at Six Flags Discovery Kingdom in Vallejo, California, on January 17, 2014. Bella, 9, gave birth to her first calf on January 9. (Photo by Justin Sullivan/Getty Images) 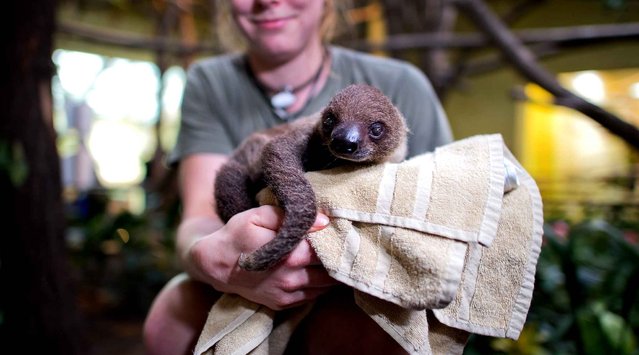 Keeper Stefanie Silbermann carefully weighs a baby sloth that was born on 04 September 2013 during the annual inventory at the zoo in Dresden, Germany, 16 January 2014. All of the zoo's residents are examined and catalogued carefully every year. The sloth weighed 1,400 grams. (Photo by Arno Burgi/AFP Photo/DPA) 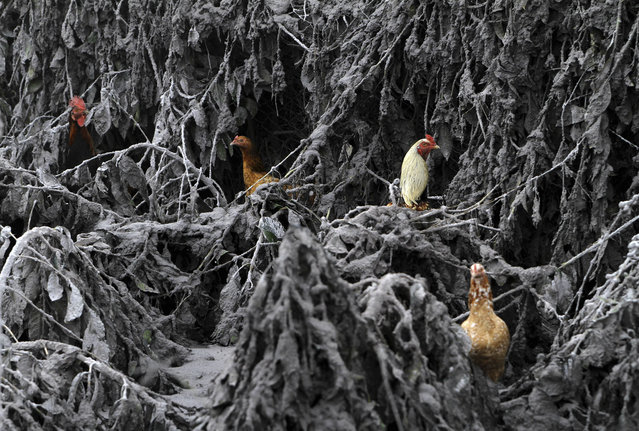 Chickens are seen in the midst of plants covered by ash from Mount Sinabung near Sigarang-Garang village in Karo district, Indonesia's North Sumatra province, January 12, 2014. More than 22,000 villagers have been evacuated since authorities raised the alert status for the volcano to the highest level in November 2013, local media reported on Friday. (Photo by Roni Bintang/Reuters) 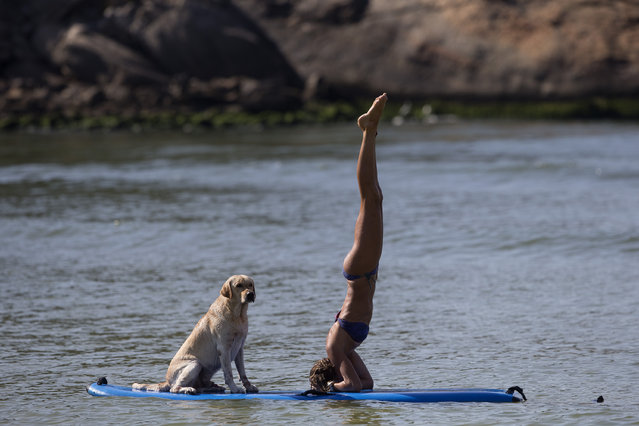 Cecilia Canetti practices yoga on a stand-up paddle board as her dog Polo accompanies her off Barra de Tijuca beach in Rio de Janeiro, Brazil, Thursday, Jan. 16, 2014. Canetti is training her dog to accompany her as she stand-up paddle surfs, along with other paddle surfing dog owners preparing for an upcoming competition of paddle surfers who compete with their dogs. (Photo by Silvia Izquierdo/AP Photo) 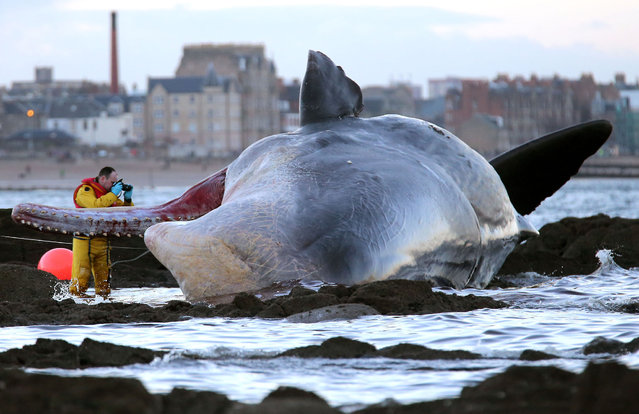 A marine rescue worker photographs a sperm whale that washed up on Portobello beach in Edinburgh, Scotland, Saturday, January 11, 2014. Police in Scotland and a Scottish Society for Prevention of Cruelty to Animals, SSPCA, team were called to Portobello beach near the Rockville hotel in Joppa, Edinburgh, at around 7.30 am Saturday. A spokeswoman said the animal is dead and arrangements are being made with Edinburgh City Council to remove it from the water. (Photo by Andrew Milligan/AP Photo/PA Wire) 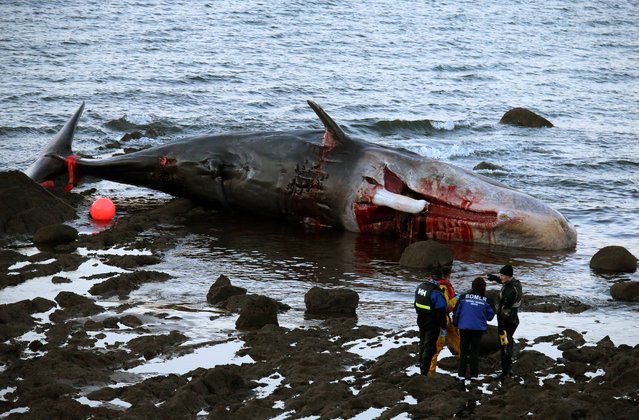 Marine rescue workers examine a sperm whale that washed up on Portobello beach in Edinburgh. (Photo by Andrew Milligan/PA Wire) 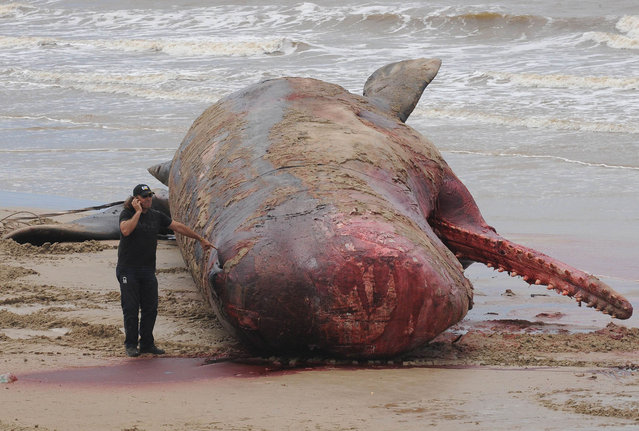 A municipal worker talks on a mobile phone next to a whale on January 12, 2014 as its body is being removed from the water a day after appearing at the shore of Carrasco beach in Montevideo, Uruguay. (Photo by Miguel Rojo/AFP Photo) 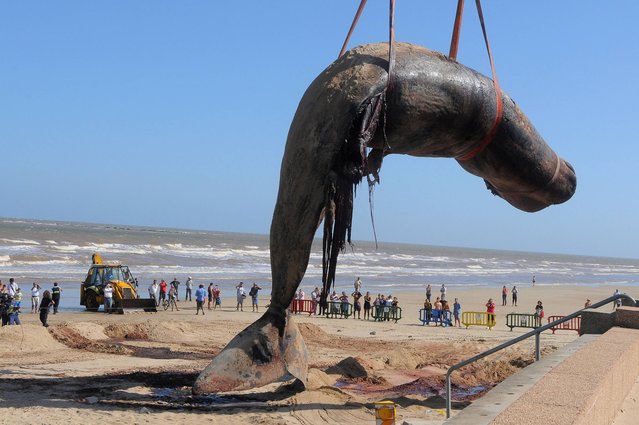 The carcass of a sperm whale that washed ashore on Carrasco beach is lifted with a crane, in Montevideo, Uruguay, Monday, January 13, 2014. Dozens of Navy officials and rescuers used excavators to remove the marine mammal weighing up to 25 tons, to be buried in a nearby landfill. The 16-meter (52.5-foot) whale was found Saturday. (Photo by El Pais/AP Photo) 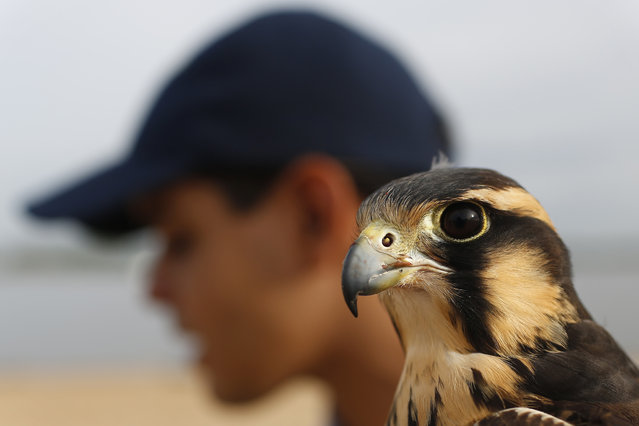 A female Aplomado Falcon named Baraka perches on the hand of her trainer Raul Palacios as he gives an interview and demonstration of his training techniques alongside the bay of Asuncion, Paraguay, Saturday, January 11, 2014. Baraka and other falcons trained by Palacios, a veterinarian, are being used to chase migratory birds away from airplanes that service the capital's airport, in an effort to reduce the risk of birds getting sucked into plane turbines and causing aviation accidents. (Photo by Jorge Saenz/AP Photo) 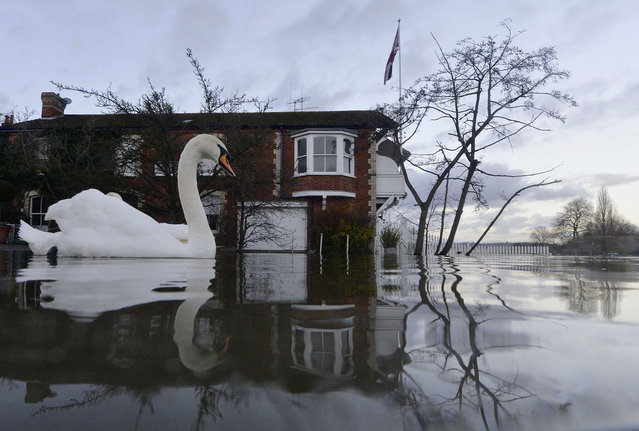 Swans swim near riverside properties partially submerged in floodwaters at Henley-on-Thames in southern England, January 13, 2014. Britain's insurers are preparing to pay out hundreds of millions of pounds in claims following a run of winter storms that have flooded homes and disrupted travel, though the absence of major damage should limit the impact on their 2013 results. More than 1,700 homes and businesses have been affected by the floods in England since late December, which also killed seven people, according to news reports. (Photo by Toby Melville/Reuters) 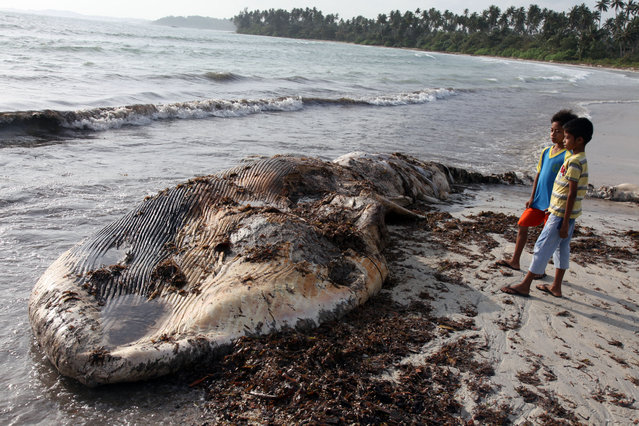 Passersby look over a dead whale shown washed up on shore January 14, 2014 on Bintan Island, Indonesia. The beaching of the unidentified species is a relatively rare occurence for this span of island shore bordering Singapore and Malaysia. (Photo by Yuli Seperi/Getty Images) 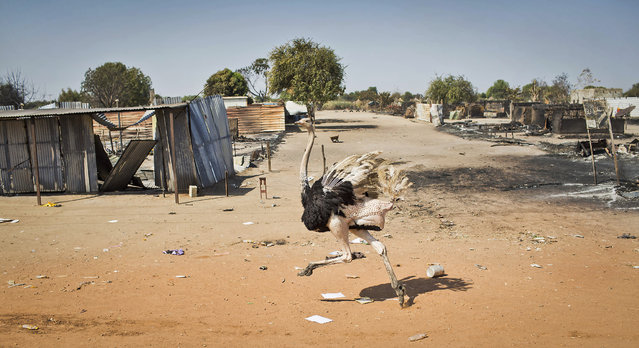 An ostrich runs through empty streets and past destroyed buildings, after government forces on Friday retook from rebel forces the provincial capital of Bentiu, in Unity State, South Sudan, Sunday, January 12, 2014. On Sunday senior South Sudanese government officers inspected the recaptured town of Bentiu, in northern Unity State, that was the scene of intense fighting between government and rebel forces, while a South Sudanese government official claimed rebels had badly damaged petroleum facilities in the state. (Photo by Mackenzie Knowles-Coursin/AP Photo) 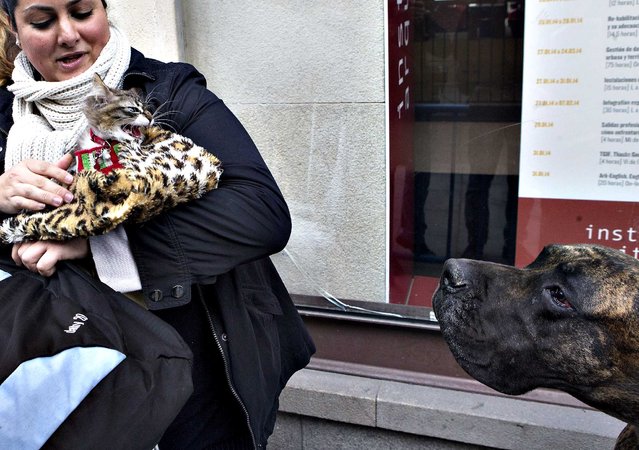 A cat hisses at a Great Dane dog in the queue while waiting to be anointed outside the Saint Anton church in Madrid, Friday, January 17, 2014. It is the animal's patron saint day in which thousands of people all over Spain bring their pets to churches to be blessed. (Photo by Paul White/AP Photo) 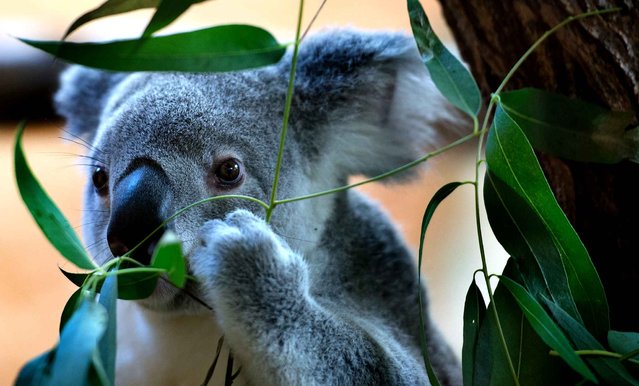 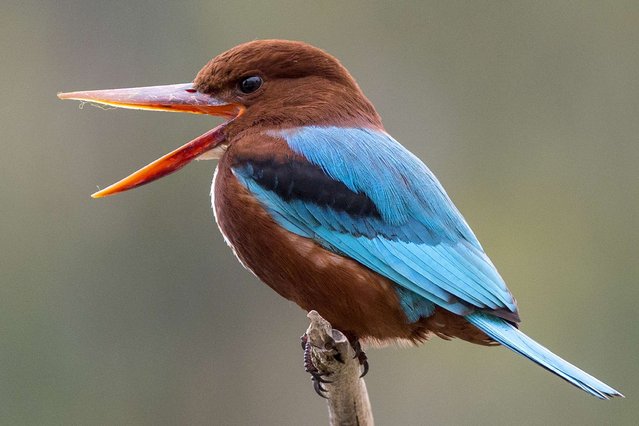 A picture taken on January 10, 2014 shows a tree kingfisher perched on a branch in the Mediterranean coastal city of Tel Aviv, Israel. (Photo by Jack Guez/AFP Photo) 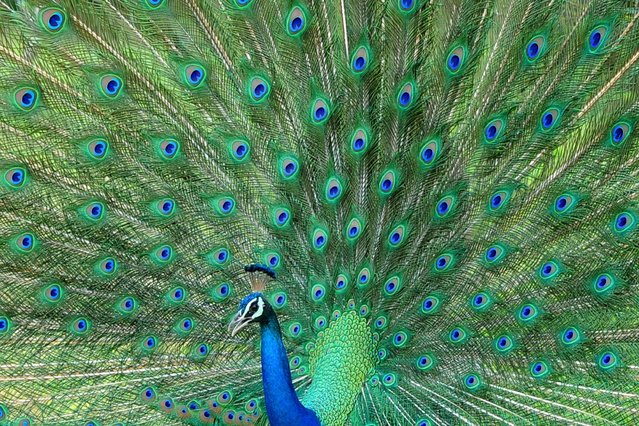 A male peacock displays its feathers at Sri Lanka's Yala National Park, in the southern district of Yala, some 250 kms southwest of Colombo, on January 15, 2014.Yala National Park is the most visited and second largest national park in Sri Lanka. (Photo by Lakruwan Wanniarachchi/AFP Photo) 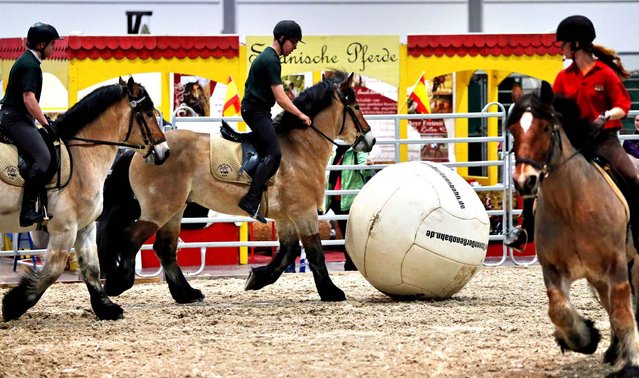 Draft horses play horse soccer at the horse show Partner Pferd in Leipzig, Germany, 16 January 2014. Around 25 exhibitors from seven countries are presenting their products for horses until 19 January 2014. The expo also features a program of shows and world cup tournaments in show jumption, equestrian vaulting and four-in-hand drivers. (Photo by Jan Woitas/AFP Photo) 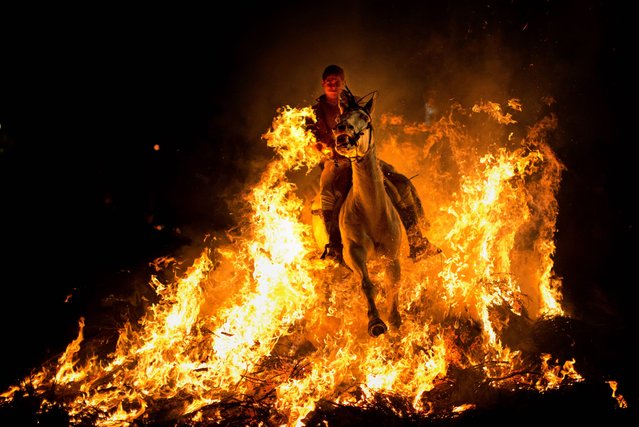 A man rides a horse through a bonfire as part of a ritual in honor of Saint Anthony, the patron saint of animals, in San Bartolome de Pinares, about 100 km west of Madrid, Spain on Thursday, January 16, 2014. On the eve of Saint Anthony's Day, hundreds ride their horses through the narrow cobblestone streets of the small village of San Bartolome during the “Luminarias”, a tradition that dates back 500 years and is meant to purify the animals with the smoke of the bonfires and protect them for the year to come. (Photo by Emilio Morenatti/AP Photo) 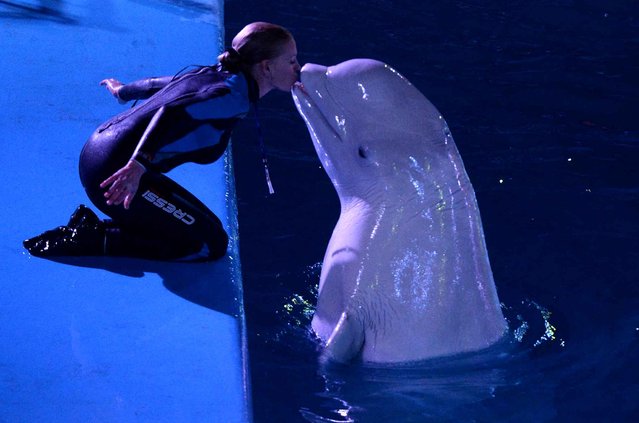 Stephen, the Beluga, kisses with Ukrainian trainer Inga Strekach during the show at the Maritime Museum in Karachi on January 11, 2014. The dolphin, the beluga and the sea lion have been brought in especially for a water show that will be the first of its kind to take place in Pakistan. (Photo by Asif Hassan/AFP Photo) 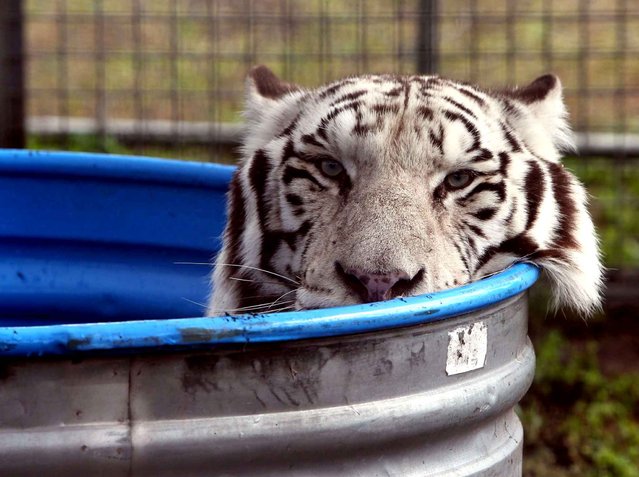 “Sunderan”, a 6-year-old Bengal tiger cools off in a tub during a workout, as the Ringling Bros. and Barnum & Bailey Circus is held at the American Airlines Arena in downtown Miami, Wednesday, January 15, 2014. (Photo by Walter Michot/Miami Herald/MCT via Getty Images) 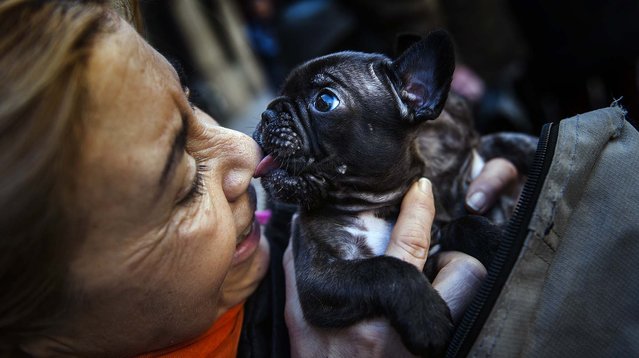 A woman waits with her dog to be anointed outside the Saint Nicolas church in Pamplona, Spain, on the animals patron saint day, on January 17, 2014. (Photo by Alvaro Barrientos/Associated Press) 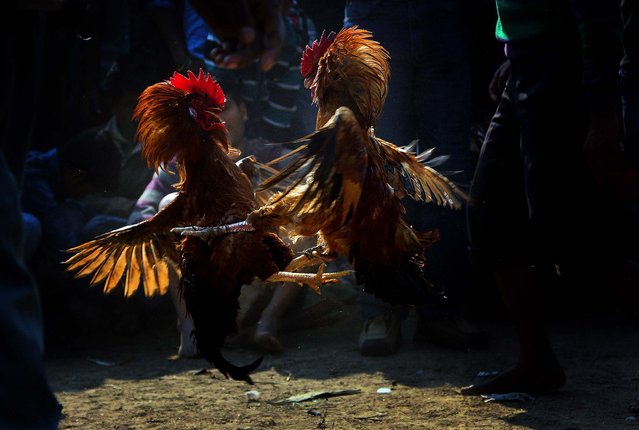 Roosters attack each other during a rooster fight as part of the Jonbeel festival near Jagiroad, India, on January 17, 2014. Tribal communities like Tiwa, Karbi, Khasi, and Jaintia from nearby hills participate in the festival that signifies harmony and brotherhood amongst various tribes and communities. (Photo by Anupam Nath/Associated Press) 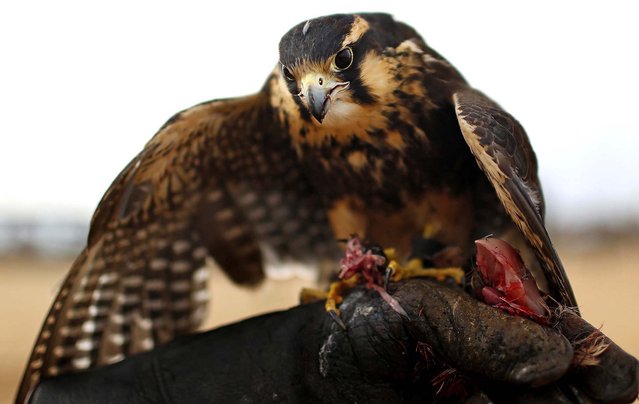 Baraka, a female Aplomado Falcon, eats quail meat as she perches on the hand of her trainer Raul Palacios during a demonstration of his training techniques at the bay of Asuncion, Paraguay, on January 11, 2014. Baraka and other falcons trained by Palacios, a veterinarian, are being used to chase migratory birds away from airplanes that service the capital's airport, in an effort to reduce the risk of birds getting sucked into plane turbines which can cause aviation accidents. (Photo by Jorge Saenz/Associated Press) 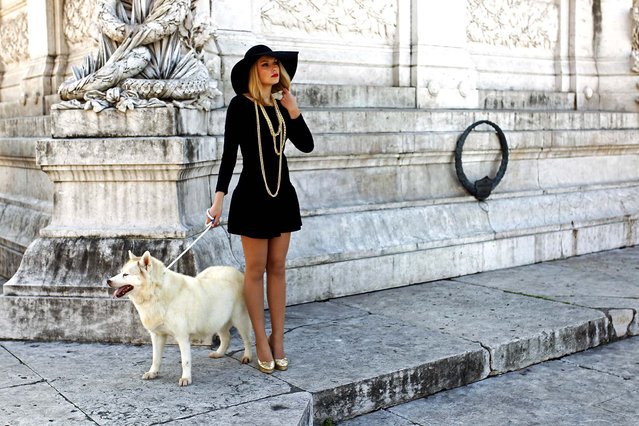 A model holds a dog by a leash as she waits for her turn to enter the catwalk during the recording of a Portuguese soap opera at Lisbon's Restauradores Square, on January 11, 2014. (Photo by Francisco Seco/Associated Press)
Edit Del
18 Jan 2014 13:54:00, post received 0 comments
Publication archive:
←   →
Popular tags:
All tags
Last searches: