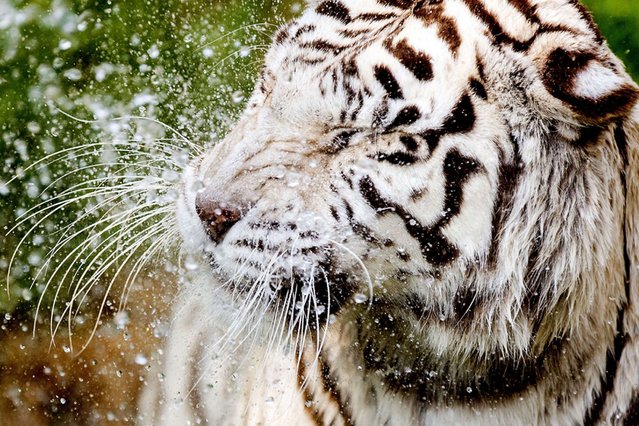 A white tiger is cooled off with water in the Ouwehand Zoo in Rhenen, Netherlands, on July 24, 2013, as temperatures reach 32 degrees Celsius. (Photo by Koen van Weel/AFP Photo) 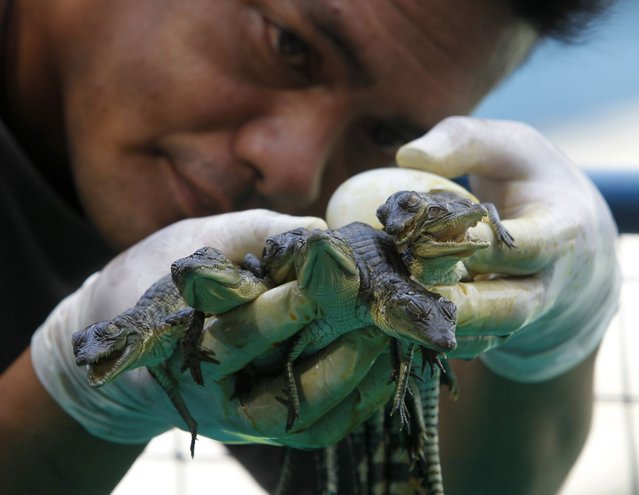 A caretaker shows newly hatched baby crocodiles inside a crocodile farm in Pasay City, Manila in the Philippines on July 19, 2013. (Photo by Romeo Ranoco/Reuters) 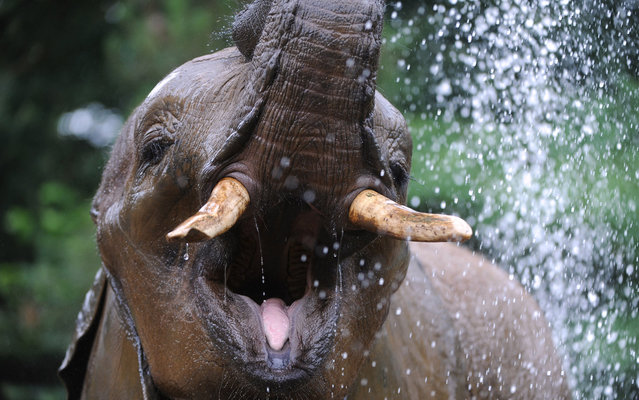 An elephant gets a shower, on July 23, 2013 at the La Fleche Zoo, western France. Keepers at the zoo prepare cold treats for animals to give them respite from the hot weather. (Photo by Jean-Francois Monier/AFP Photo) 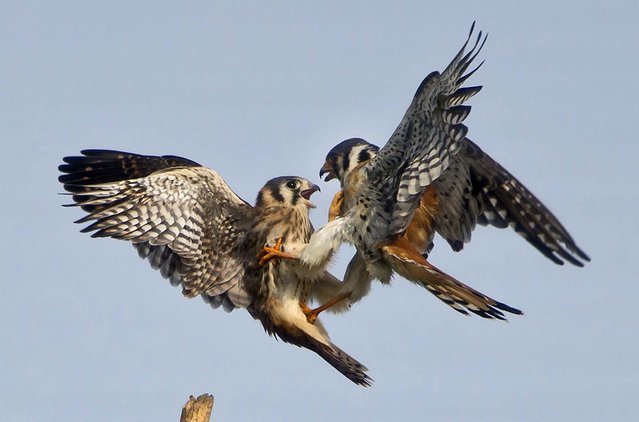 A female and male American Kestrel, formerly known as the Sparrow Hawk, have a family spat near Newberry, Florida, on July 25, 2013, while teaching their newly fledged young how to make their way in the wild. The American Kestrel is the smallest falcon in North America. (Photo by Phil Sandlin/Associated Press) 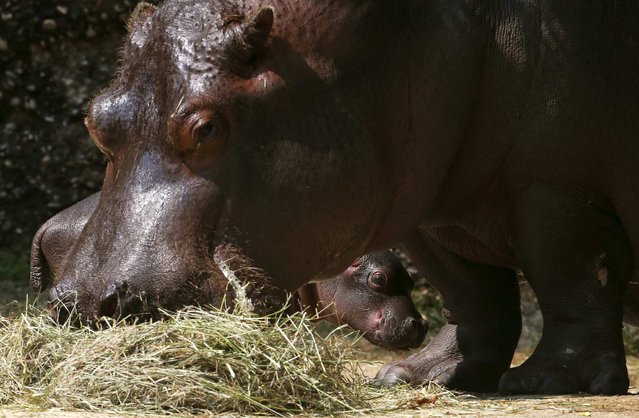 A two-day old unnamed hippopotamus stands behind its 22-year old mother Helvetia at an enclosure at the Zoo in Basel July 19, 2013. (Photo by Arnd Wiegmann/Reuters) 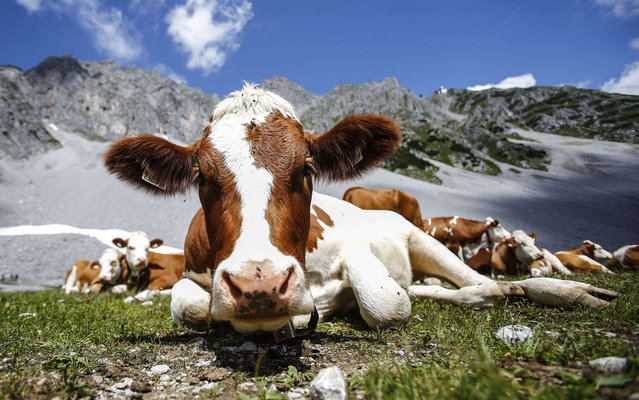 Cows lie in grass in front of Hafelekar mountain on a hot summer day in Innsbruck July 25, 2013. (Photo by Dominic Ebenbichler/Reuters) 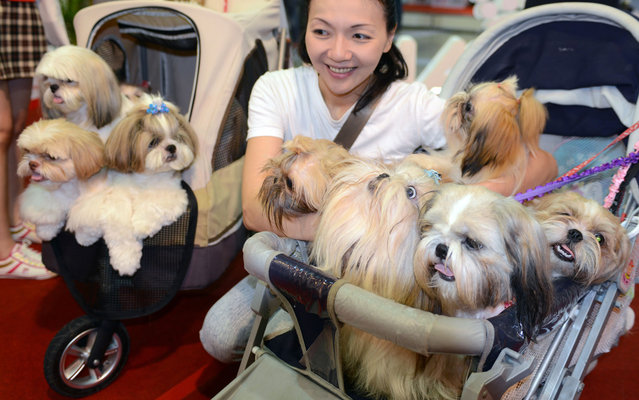 A woman poses with her dogs during the annual pet show at the World Trade Center in Nankang, Taipei on July 25, 2013. According to organizers, this will be the biggest Pets Taipei ever, with the number of participants growing by 35 percent from last year. This year’s show will have a total of 850 stalls with everything ranging from the most mundane daily requirements such as pet food and grooming equipment. (Photo by Sam Yeh/AFP Photo) 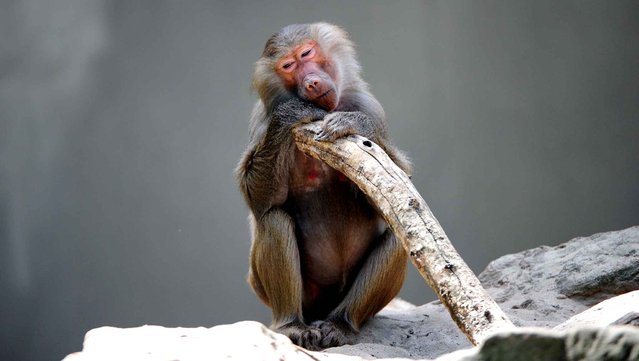 A baboon sits in the shade in its enclosure in the Berlin Zoo, Germany, on July 22, 2013. (Photo by Daniel Reinhardt/AFP Photo/DPA) 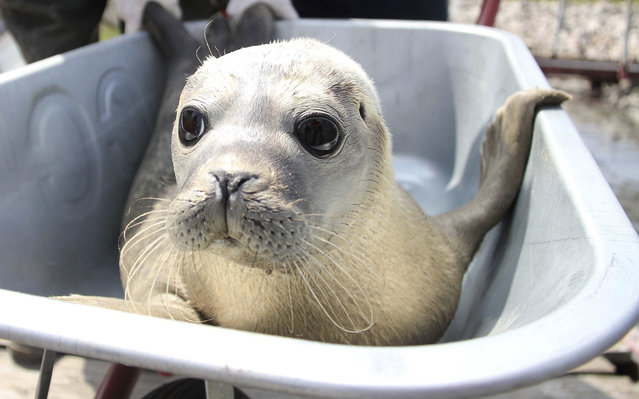 A seal is pictured inside a wheelbarrow in Friedrichskoog, Germany, on July 25, 2013. It's being transported to a boat and to be taken out to sea. (Photo by Wolfgang Runge/DPA) 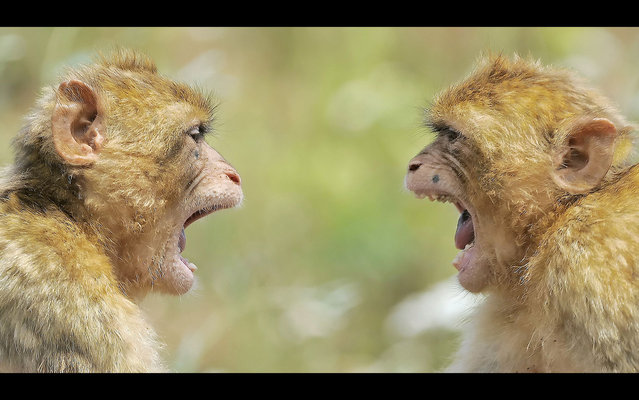 Barbary apes challenge for food in the Erfurt zoo in central Germany, on July 25, 2013. (Photo by Jens Meyer/AP Photo) 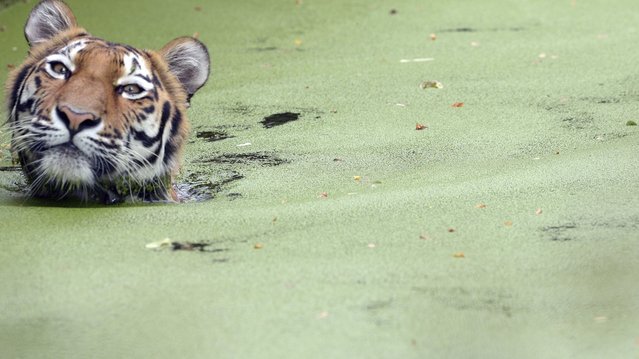 A Siberian tiger takes a swim in his open-air enclosure at the Zoo in Duisburg, Germany on July 23, 2013. (Photo by Federico Gambarini/EPA) 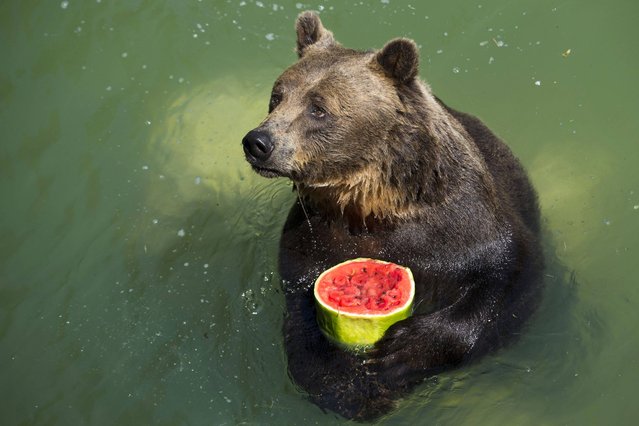 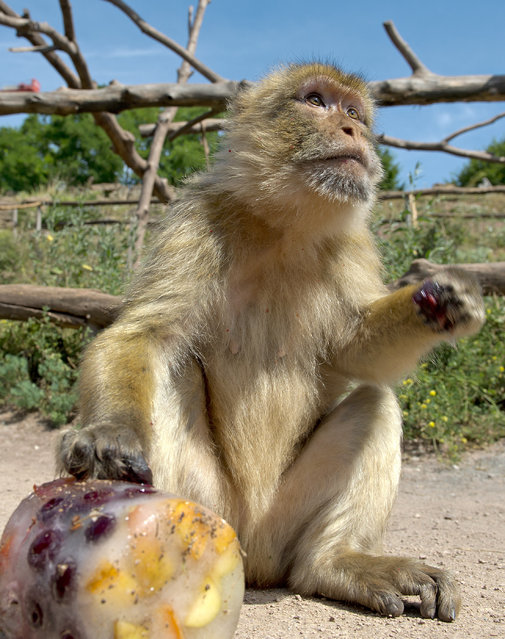 A barbary ape guards a big block of ice candy, composed of a mix of vegetables frozen in ice, during warm temperatures in the Erfurt Zoo, central Germany, Friday, July 26, 2013. Weather forecasts predict sunny weather and warm temperatures for Germany in the next few days. (Photo by Jens Meyer/AP Photo) 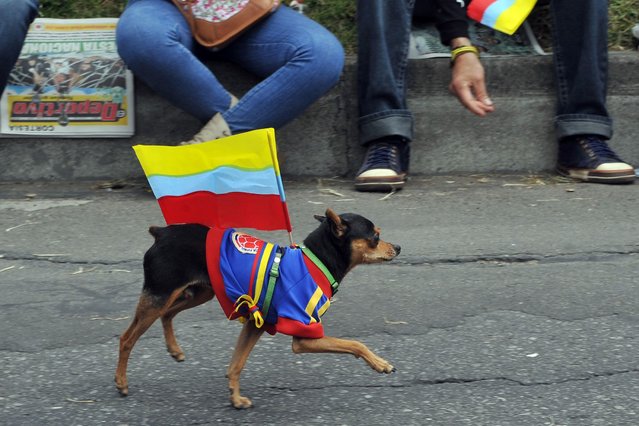 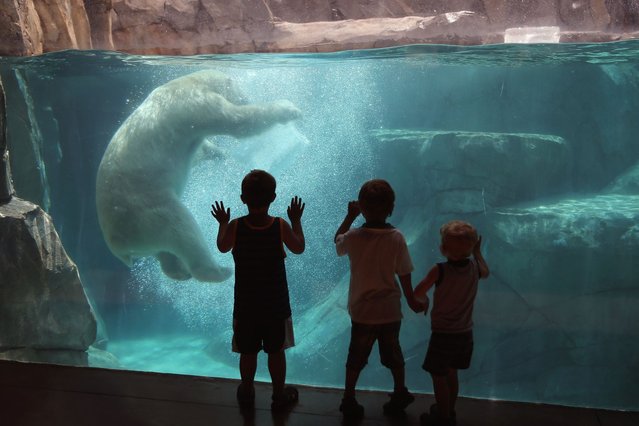 Hudson, a polar bear, cools down by playing with a block of ice during a swim in his enclosure at Brookfield Zoo in Brookfield, Illinois, on July 21, 2013. (Photo by Scott Olson/Getty Images) 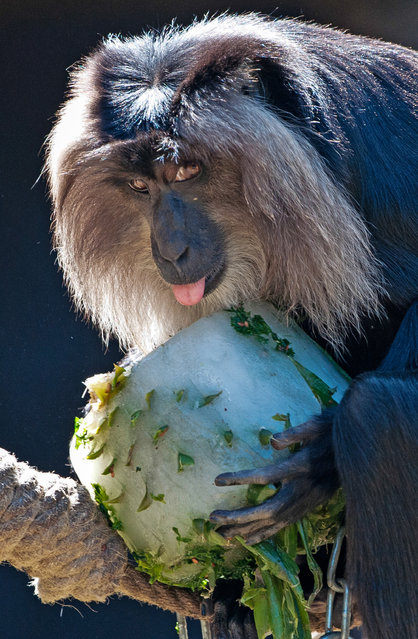 A Lion-Tailed macaque holds a big block of ice with a mix of frozen vegetables and fruit at the zoo in Leipzig, central Germany, Friday, July 19, 2013. Weather forecasts predict sunny weather and warm temperatures for Germany in the next few days. (Photo by Jens Meyer/AP Photo) 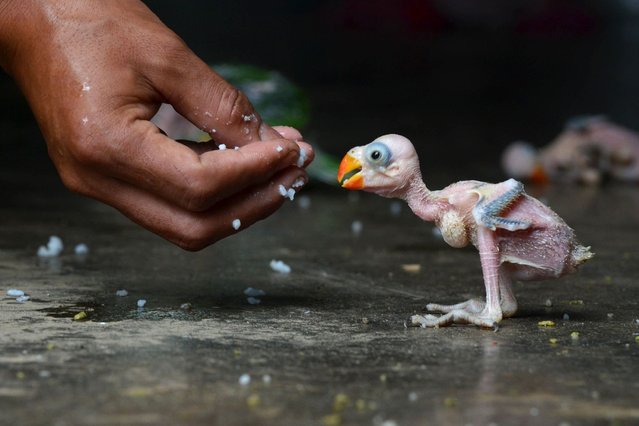 An Indian parrot hatchling is fed by hand in Dimapur after being caught in a forest by a local hunter, on July 25, 2013. (Photo by AFP Photo) 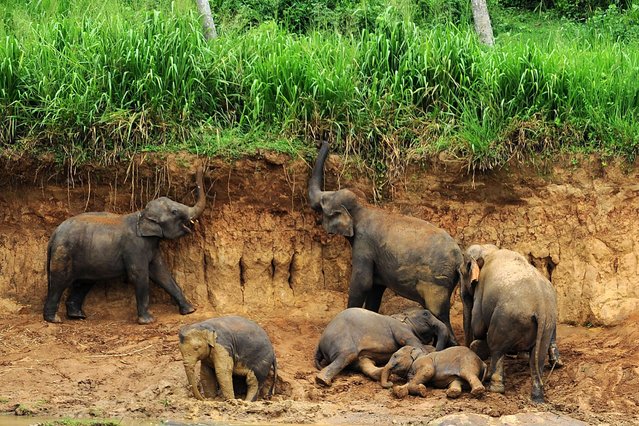 A herd of elephants from the Pinnawela Elephant Orphanage are pictured at the village of Pinnawela, some 90kms north-east of Colomb, on July 25, 2013. (Photo by Ishara S. Kodikara/AFP Photo) 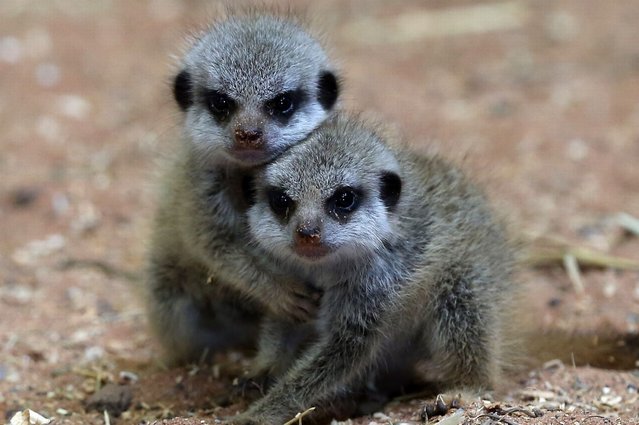 Two of the three recently arrived baby meerkats, play together in their enclosure at Bristol Zoo Gardens, on July 25, 2013. (Photo by Matt Cardy/Getty Images) 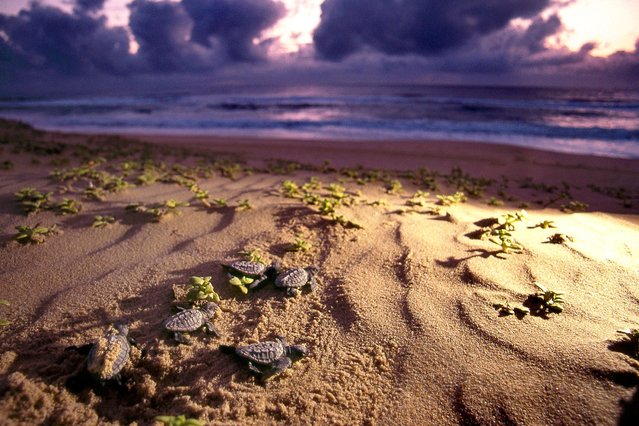 This is the incredible moment baby turtles take their first steps across the beach before swimming away in the sea in South Africa, on July 25, 2013. (Photo by Roger de la Harpe/Caters News) 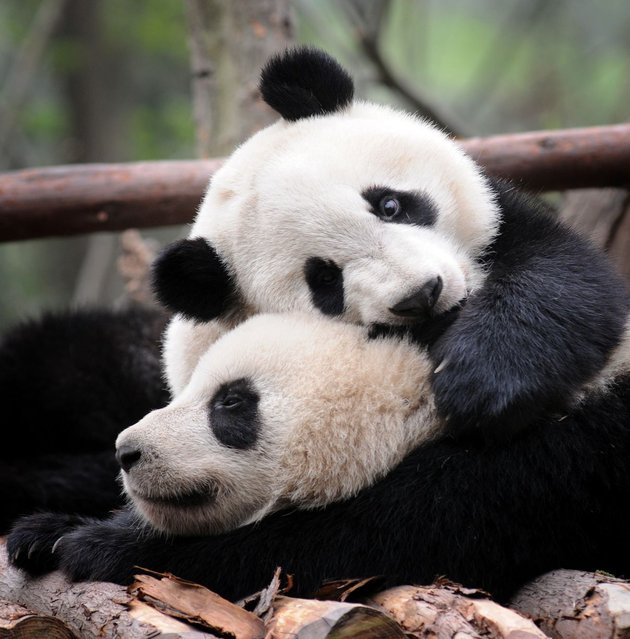 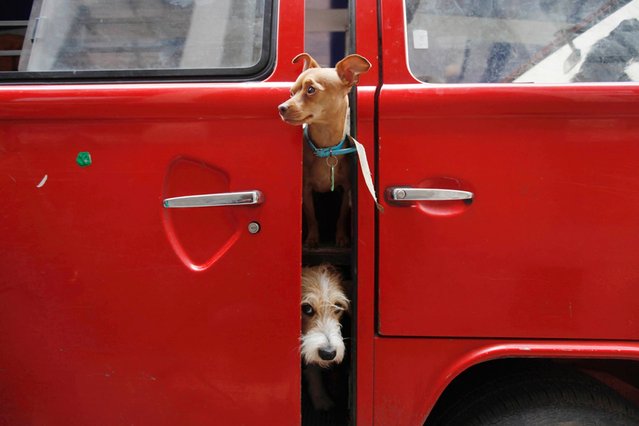 Dogs look out from a car in Mexico City, on July 20, 2013. Robbery and kidnapping of breed dogs have quadrupled during the last few years in Mexico, according to animal care and control organizations. (Photo by Edgard Garrido/Reuters) 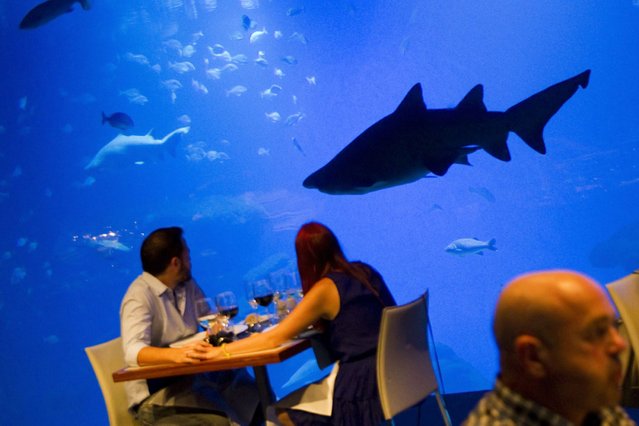 People enjoy a dinner past the Big Blue, the deepest shark tank in Europe at the Palma Aquarium in Palma de Mallorca, on July 20, 2013. (Photo by Jaime Reina/AFP Photo) 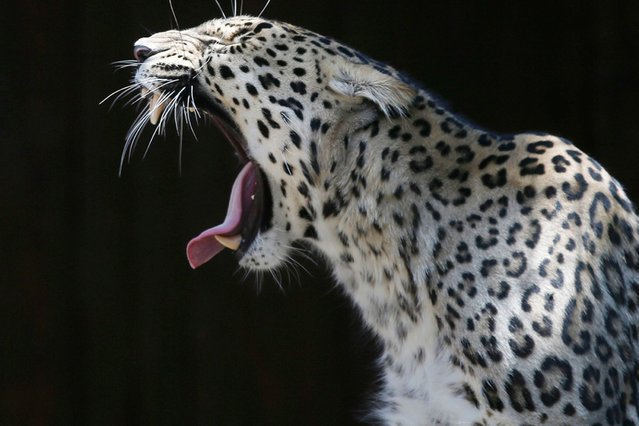 A leopard yawns inside its enclosure at the Madrid Zoo in Spain, on July 24, 2013. (Photo by Juan Medina/Reuters) 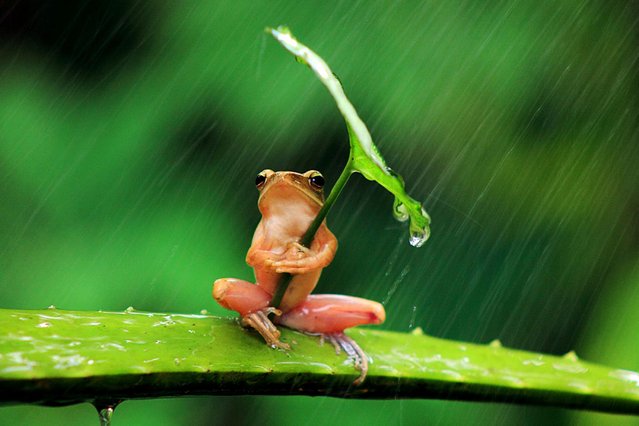 Heatwave is over: While millions of Brits swap sun hats for brollies this resourceful frog was snapped sheltering from the rain, using a leaf as an umbrella, on July 24, 2013. (Photo by Penkdix Palme/Newsteam/SWNS) 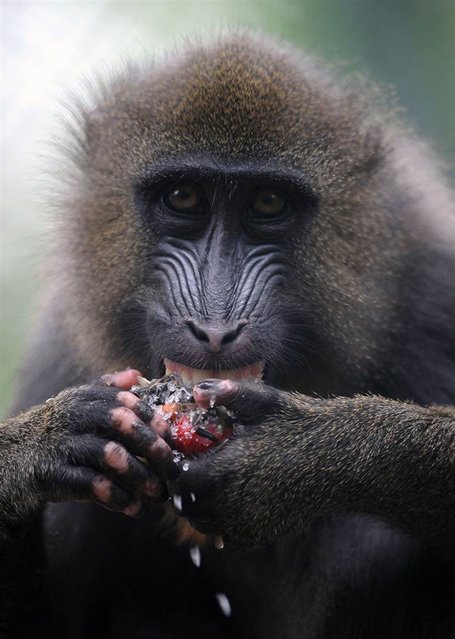 A mandrill refreshes itself with seeds from a giant sunflower, corn and strawberry ice on July 23, 2013 at the Zoo de La Flèche in France. (Photo by Jean-francois Monier/AFP Photo) 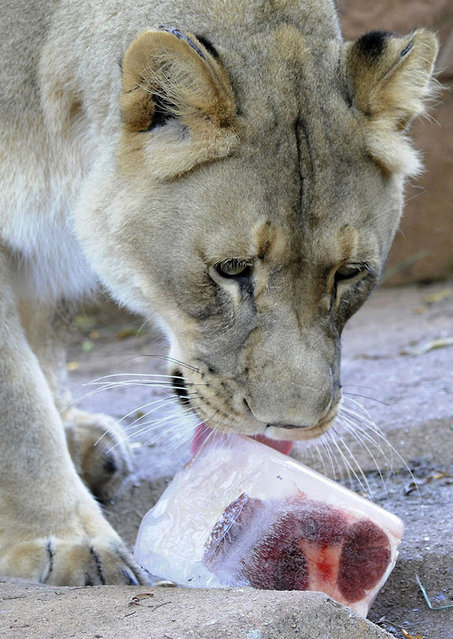 Special today at the Brookfield Zoo – frozen cow. It's one of Isis' favorites on a hot day, July 19, 2013. (Photo by Jim Schulz/Associated Press) 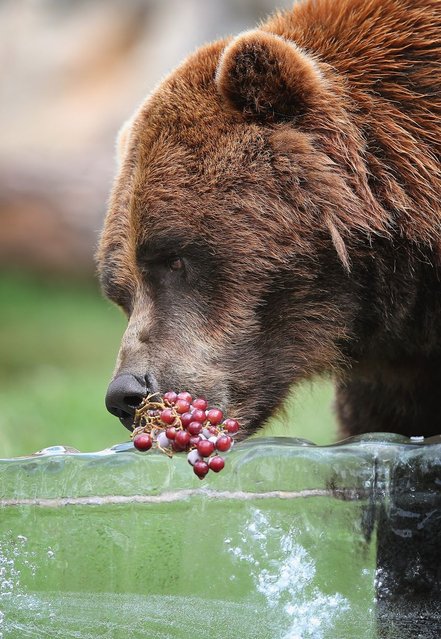 A grizzly bear gets a treat of fruit served on a block of ice to help him stay cool in his enclosure at Brookfield Zoo in Brookfield, Illinois, on July 21, 2013. (Photo by Scott Olson/Getty Images)
Edit Del
27 Jul 2013 09:44:00, post received 0 comments
Publication archive:
←   →
Popular tags:
All tags
Last searches: