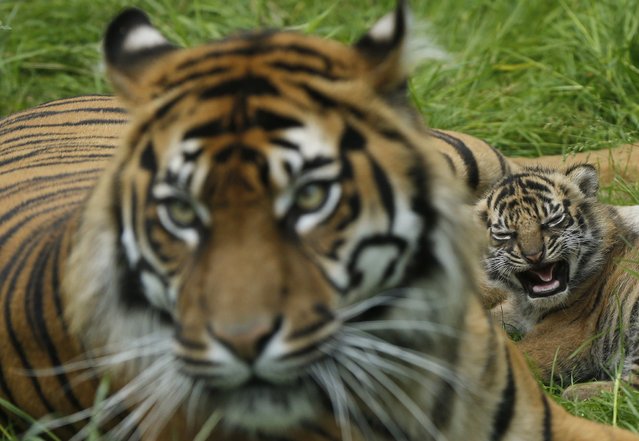 Kirana, a female Sumatran iger looks on as one of her month-old cubs yawns in their enclosure at Chester Zoo in northern England July 1, 2013. (Photo by Phil Noble/Reuters) 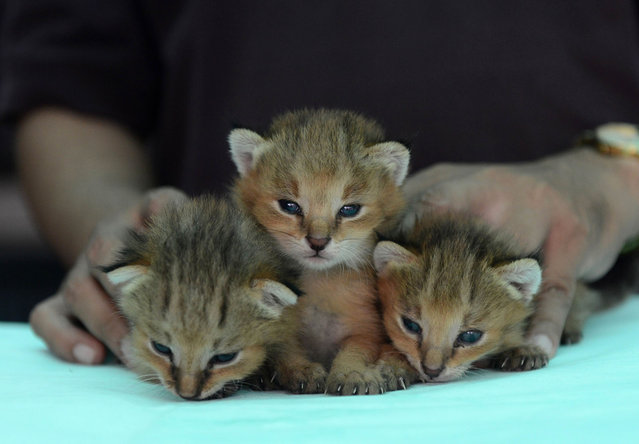 Asha Foundation animal shelter and hospital founder, Harmesh Bhatt (unseen) poses with three Jungle Lynx kittens being nurtured at the shelter on the outskirts of Ahmedabad on July 2, 2013. The Jungle Lynx kittens, who are native to Central and Southeast Asia, were rescued from Dabhoda village of Gujarat. (Photo by Sam Panthaky/AFP Photo) 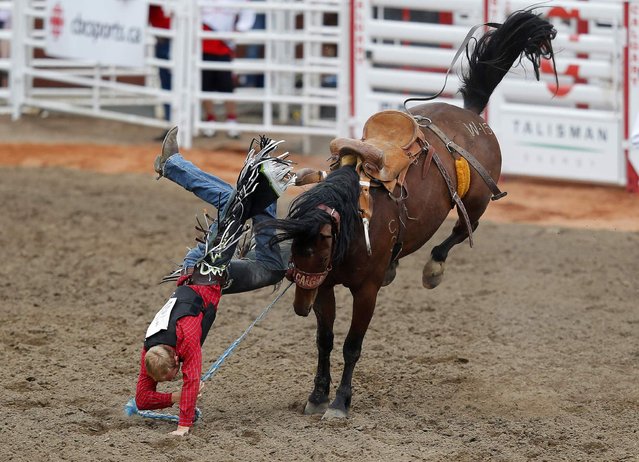 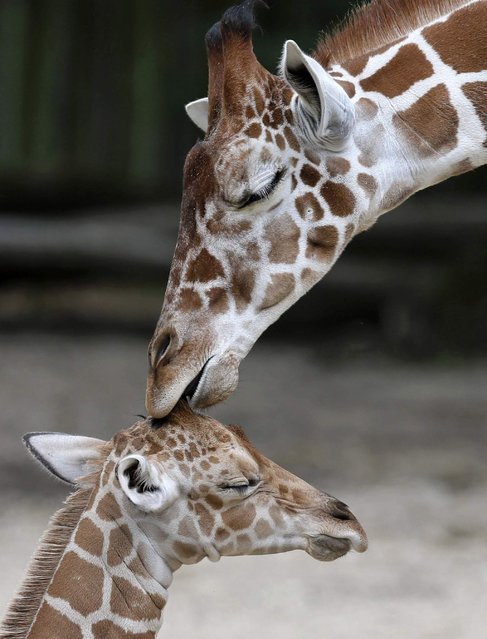 An unnamed new born male giraffe (bottom) is seen with his half-brother, Dave, at the Brookfield Zoo near Chicago, Illinois, July 3, 2013. The calf was born on June 21, and is the 59th giraffe born at the Zoo. (Photo by Jim Young/Reuters) 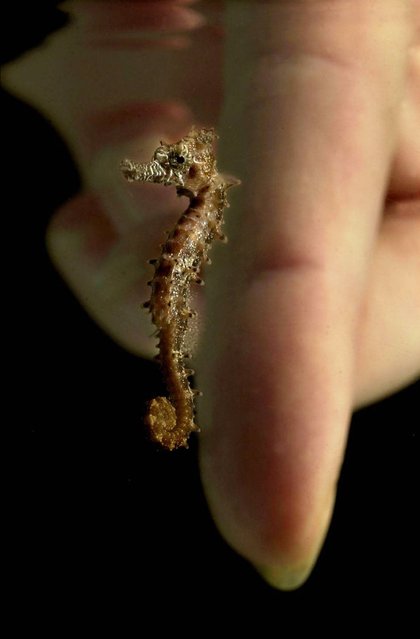 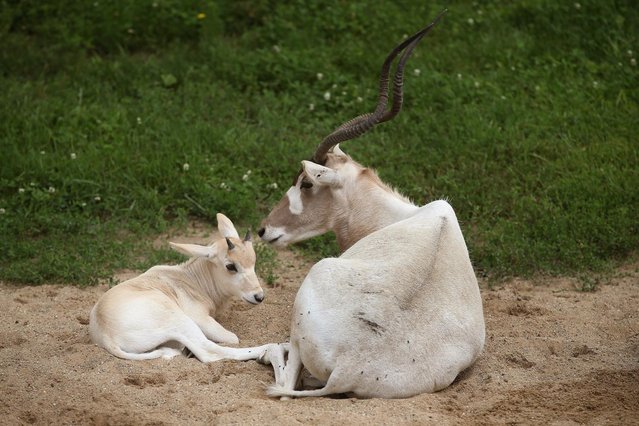 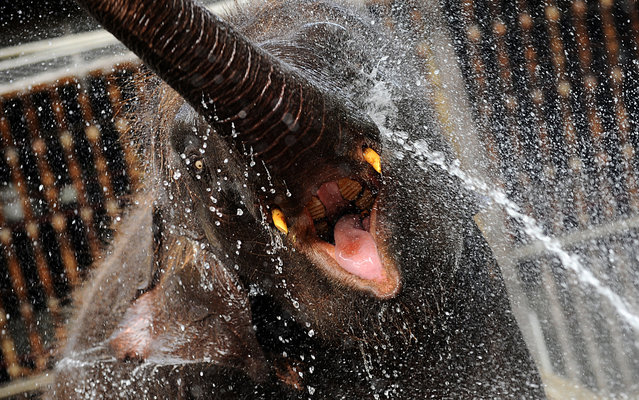 A Sri Lankan mahout (elephant trainer) hoses down an elephant at Gangarama temple in Colombo on July 5, 2013. The Sri Lankan elephant is listed as endangered by the International Union for Conservation of Nature (IUCN) as the population has declined by at least 50% over the last three generations, with the species threatened by habitat loss, degradation and fragmentation. (Photo by Ishara S. Kodikara/AFP Photo) 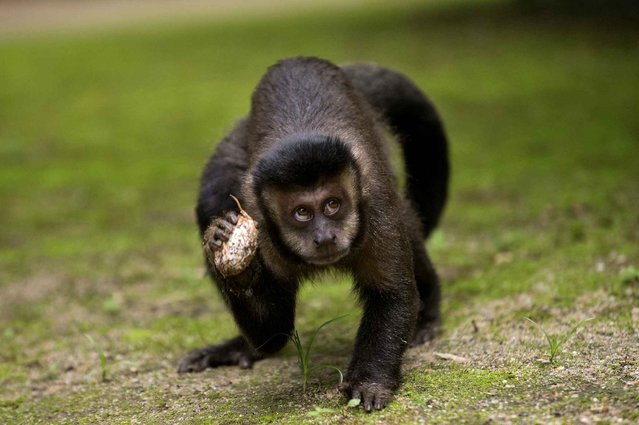 A brown capuchin monkey holds a fruit in the Botanic Garden of Rio de Janeiro, Brazil, on July 5, 2013. (Photo by Pablo Porciuncula/AFP Photo) 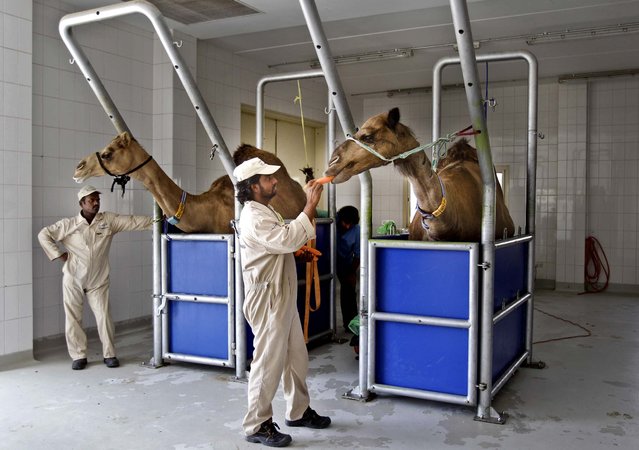 A man feeds a camel a carrot at Camelicious farm in Dubai, United Arab Emirates, on July 3, 2013. The Dubai camel milk farm expects a bump in production after the UAE approved the first Middle Eastern country to export dairy products to Europe. (Photo by Kamran Jebreili/Associated Press) 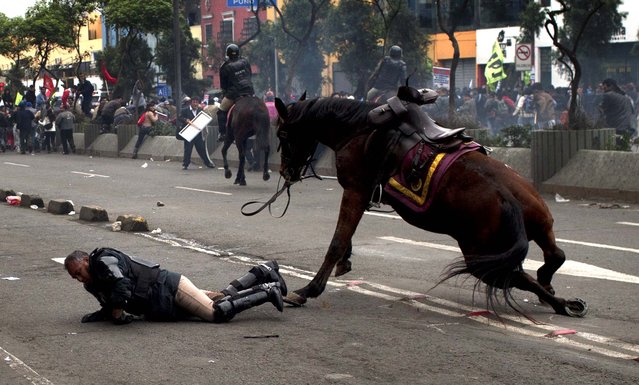 A policeman tries to recover after falling from his horse during a protest against the new civil service law that will require government employees to undergo work evaluations, in Lima, Peru, on July 4, 2013. After a total of 20 hours of debates and months of modifications, Peru's Congress approved the new civil service law with 59 votes in favor, 45 against and 3 abstentions. (Photo by Rodrigo Abd/Associated Press) 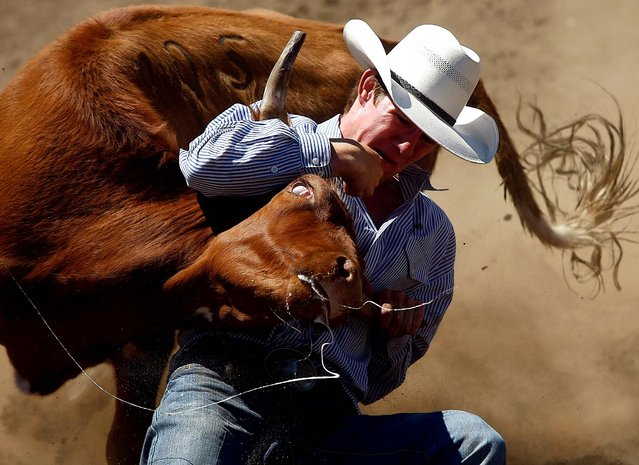 Dalton Massey competes in the steer wrestling event during the Yoncalla Rodeo in Yoncalla, Oregon, on July 4, 2013. (Photo by Michael Sullivan/The News-Review) 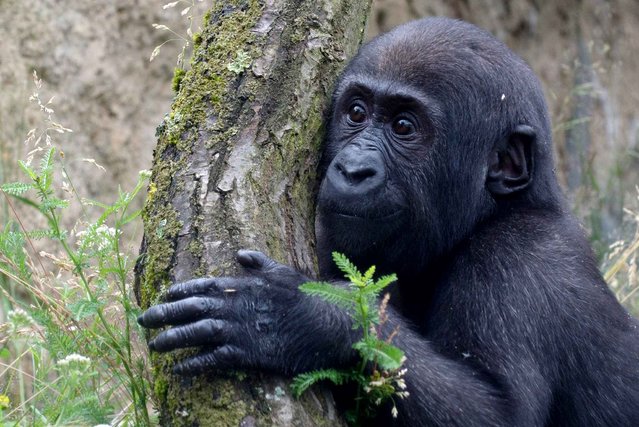 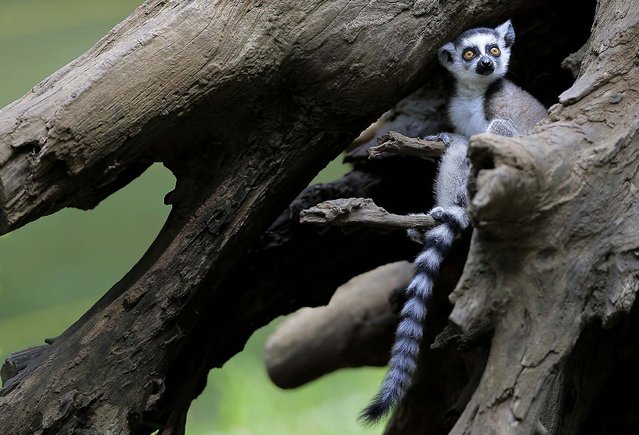 A two-month-old ring-tailed lemur sits in a tree at the Chiba Zoological Park near Tokyo, on June 30, 2013. (Photo by Itsuo Inouye/Associated Press) 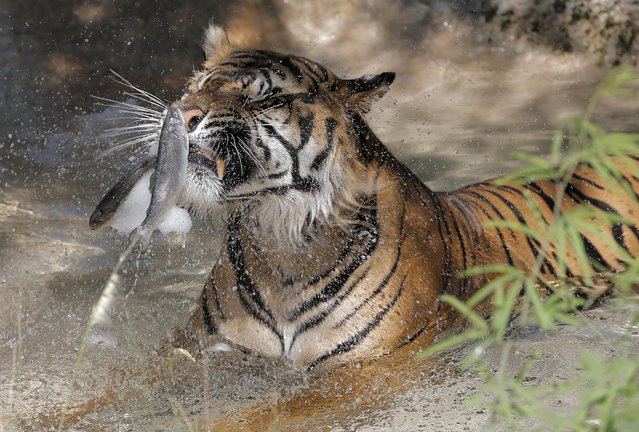 Jai, a tiger at the Phoenix Zoo, breaks apart frozen trout while sitting in his pool to keep cool, June 29, 2013 in Phoenix. Excessive heat warnings will continue for much of the Desert Southwest as building high pressure triggers major warming in eastern California, Nevada, and Arizona. Dangerously hot temperatures are expected across the Arizona deserts throughout the week with a high of 118 Friday. (Photo by Matt York/AP Photo) 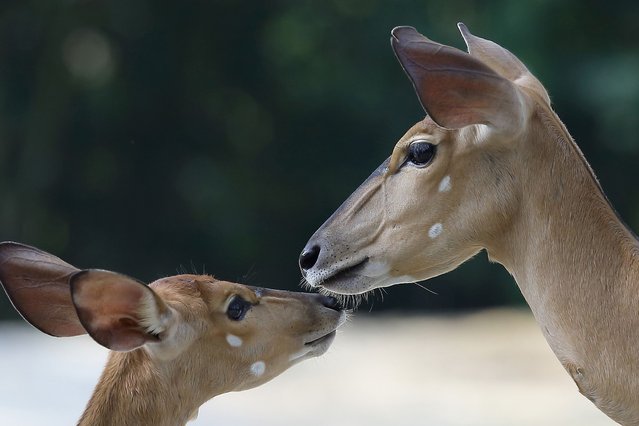 Female Nyalas are seen at the Singapore Zoo, on June 30, 2013. (Photo by Suhaimi Abdullah/Getty Images) 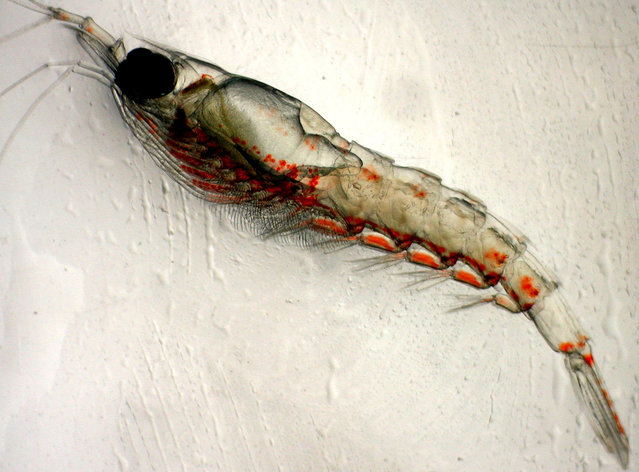 This undated photo from NOAA Fisheries Service shows a species of Pacific krill. Millions of the inch-long shrimp-like animals have been washing up on beaches between Eureka, Calif., and Newport, Ore., and scientists don't exactly know why. Strong winds may have pushed them ashore while they were mating near the surface, or they may have run into an area of low oxygen. (Photo by Jaime Gomez Gutierrez/AP Photo/NOAA) 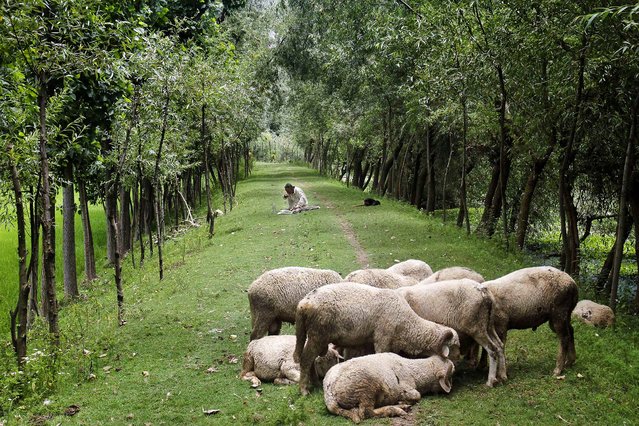 A Kashmiri villager eats his meal as a dog and a herd of sheep rest near him on the outskirts of Srinagar, India, on June 30, 2013. (Photo by Mukhtar Khan/Associated Press) 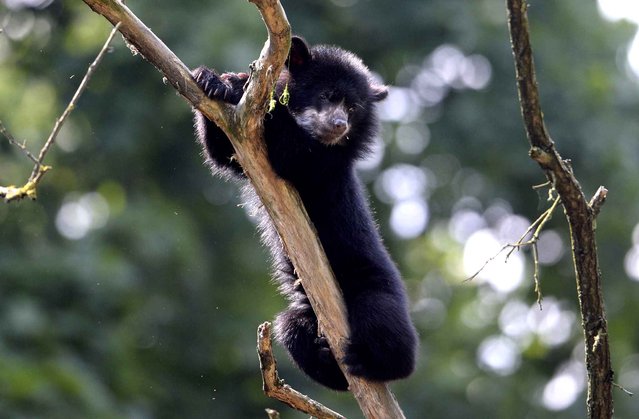 A 6-month-old spectacled bear cub, also known as an Andean bear, plays in the Tierpark Zoo in Berlin, Germany on June 28, 2013. (Photo by Johannes Eisele/AFP Photo) 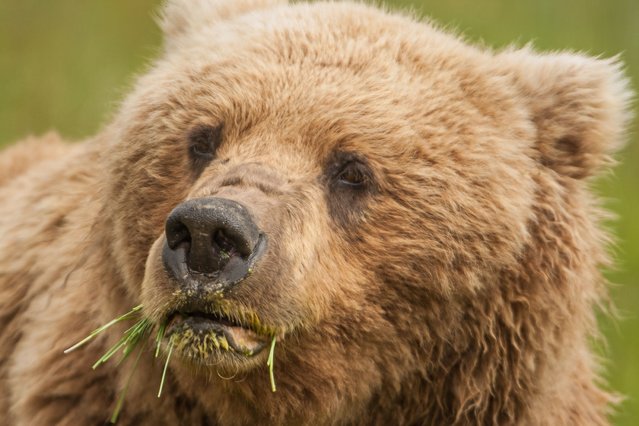 A close up of a grizzly bear in Alaska, United States, on July 5, 2013. (Photo by Graham McGeorge/Barcroft Media) 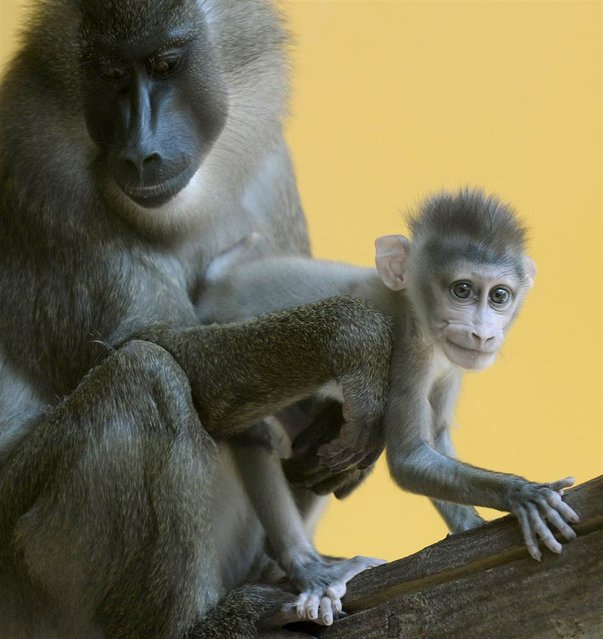 A drill monkey baby plays with his mother, Afi, at the Hellabrunn Zoo in Munich on June 29, 2013. The male monkey was born at the Zoo on May 8, 2013. (Photo by Christof Stache/AFP Photo) 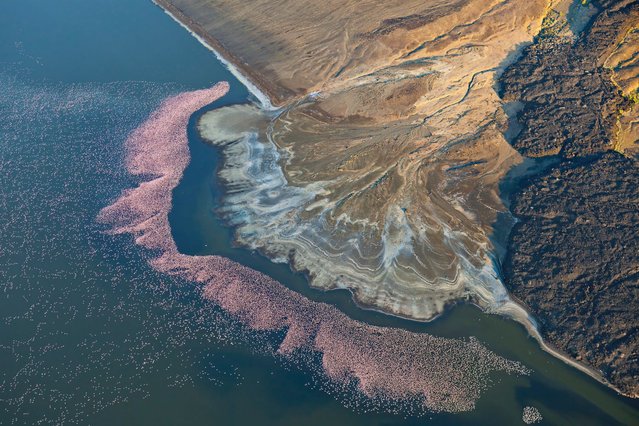 Millions of flamingos group together as they fly searching for food in different lakes in Kenya, on July 5, 2013. (Photo by Photoshelter.com) 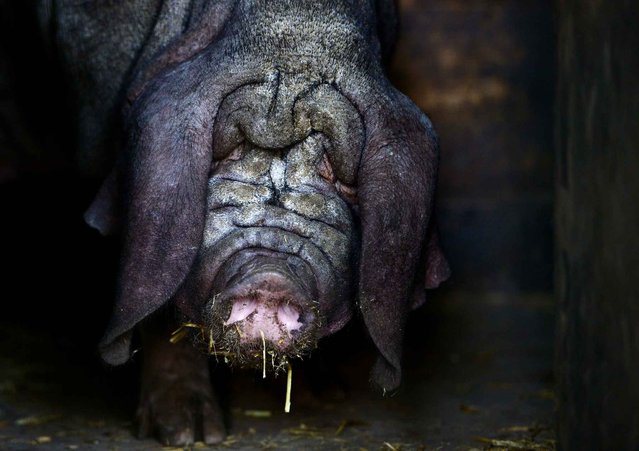