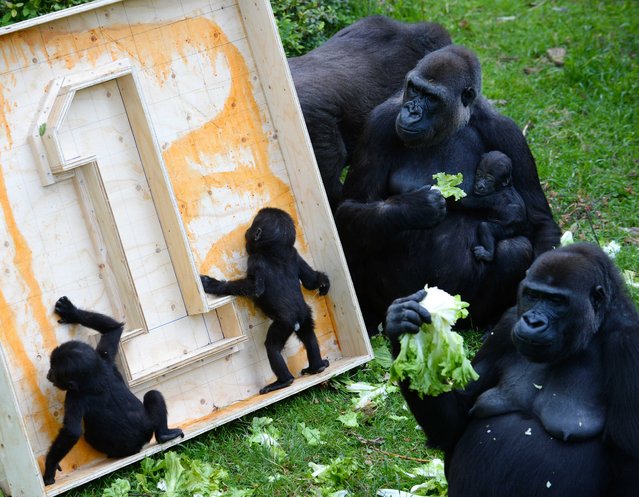 Two Gorilla twin babies curiously explore a birthday gift as they are watched by members of their family horde while 'celebrating' their first birthday in the Burgers' Zoo in Arnhem, The Netherlands, 13 June 2014. The mother has managed to keep her twin offspring alive for a full year, which is said to be the first time ever happening in an European zoo. (Photo by Piroschka Van De Wouw/EPA) 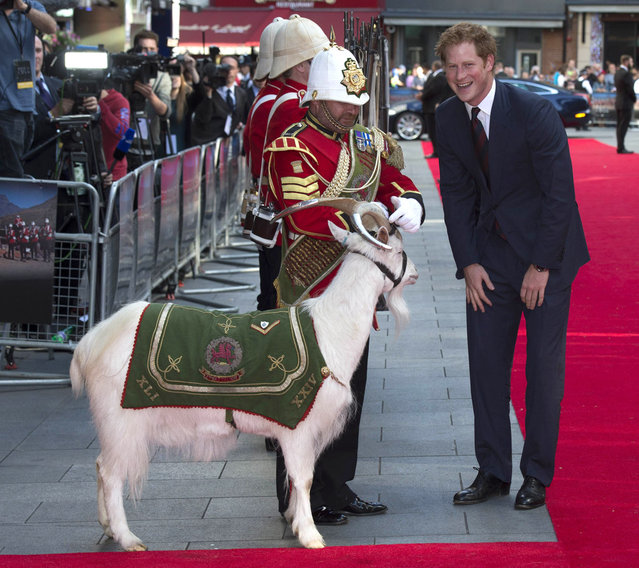 Britain's Prince Harry (R) greets the goat Shenkin, Reigmental Mascot of the 3rd Battalion The Royal Welsh and his handler Sgt Jacko Jackson (C) as he arrives to attend the 50th anniversary premiere screening of the film Zulu in London on June 10, 2014. Zulu dramatises the events at Rorke's Drift between the British Army and the Zulu Battalions in January 1879. (Photo by Paul Edwards/AFP Photo) 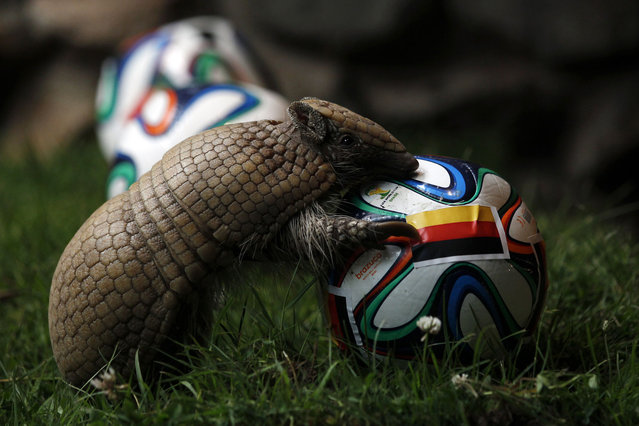 The armadillo called Norman, Germany's World Cup oracle, approaches the soccer ball representing Germany as he makes his prediction for the team's opening World Cup match against Portugal on June 16, at the zoo in the western city of Muenster June 13, 2014. (Photo by Ina Fassbender/Reuters) 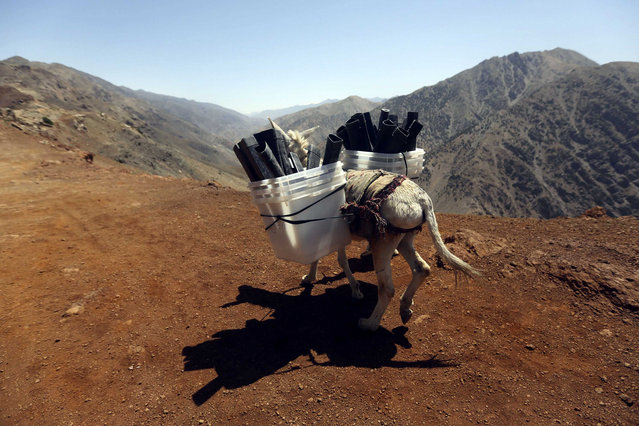 A donkey transports ballot boxes and other election material on to polling stations which are not accessible by road in Shutul, Panjshir province June 13, 2014. (Photo by Omar Sobhani/Reuters) 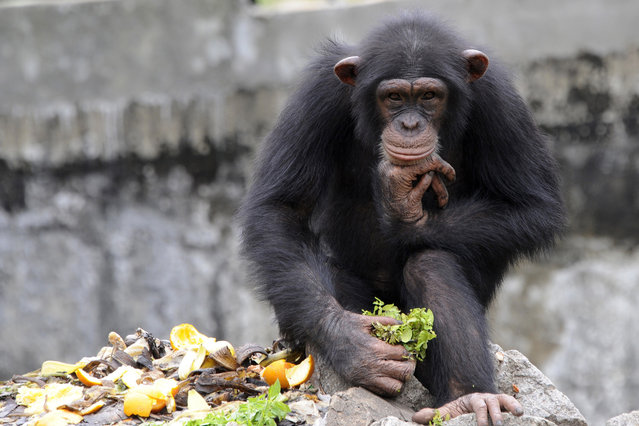 A chimpanzee holds a lettuce at the zoo in Abidjan on June 12, 2014. The zoo is home to approximately 250 amimals of 42 species. (Photo by Sia Kambou/AFP Photo) 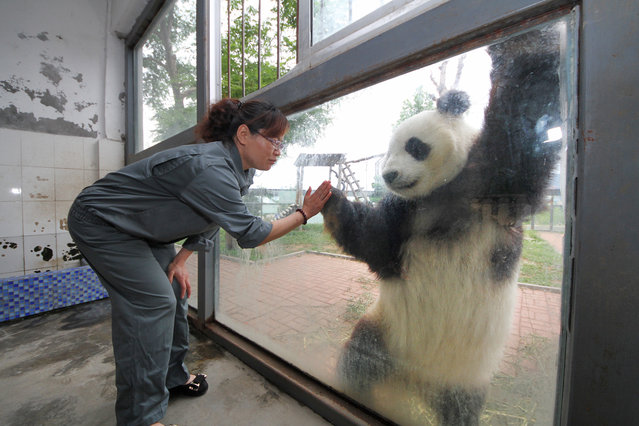 Giant panda “Huaao” shakes hands with a breeder across the glass at Yantai Nanshan Park Zoo on June 9, 2014 in Yantai, Shandong Province of China. Giant pandas Huaao and Qingfeng have finished their 3-year sojourn in Yantai and will be sent back to Ya'an Bifeng Gorge Breeding Base of Sichuan on Tuesday. (Photo by ChinaFotoPress/ChinaFotoPress via Getty Images) 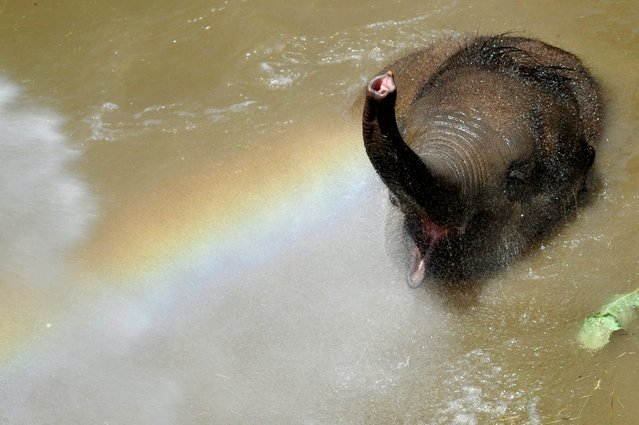 A 16-month-old Indian elephant named Asha is sprinkled with water to cool off in her enclosure in the Budapest Zoo in Budapest, Hungary, June 11, 2014, as temperatures reached 91 degrees Fahrenheit. (Photo by Attila Kovacs/AP Photo) 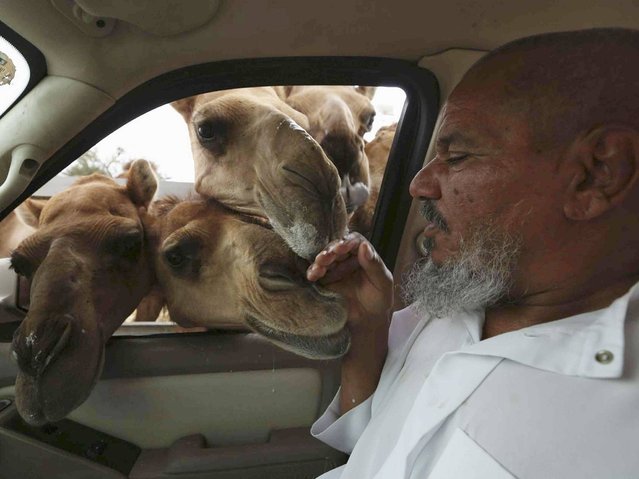 A man touches camels peering through the window of a car in Taif, on June 8, 2014. (Photo by Mohamed Alhwaity/Reuters) 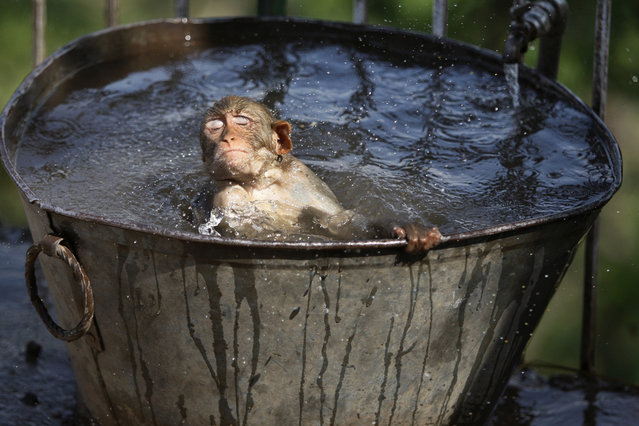 A monkey cools off in a water tub in the premises of a Hindu temple on a hot summer afternoon in Jammu, India, Wednesday, June 11, 2014. Severe heat conditions are prevailing across northern India with temperatures soaring past 45 degrees Celsius (113 Fahrenheit) at several places. (Photo by Channi Anand/AP Photo) 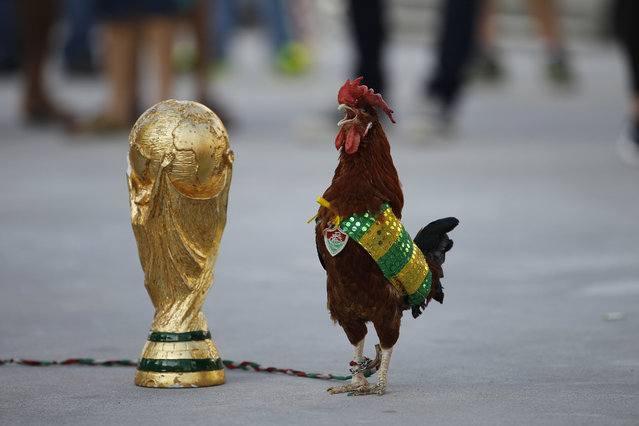 A pet rooster named Paquita Fred stands next to a replica of the World Cup trophy in front of Maracana stadium, in Rio de Janeiro, Brazil, Wednesday, June 11, 2014. The 11 year old rooster wearing a cape with the colors of the Brazilian national soccer team and a medallion of the local Fluminense soccer team gets his name from Fred, the Brazilian footballer who plays as a striker for Fluminense and is now one of the members of the national soccer team. The World Cup soccer tournament starts Thursday. (Photo by Leo Correa/AP Photo) 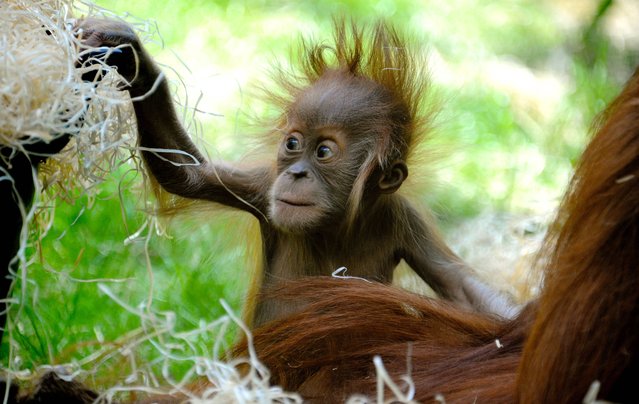 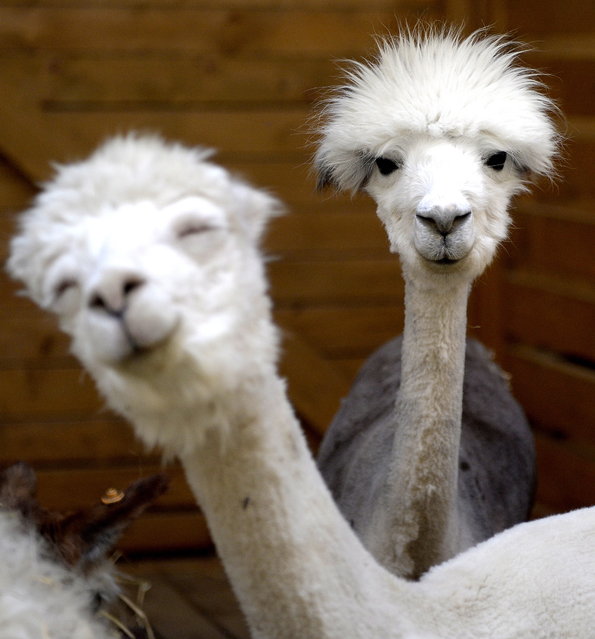 Alpacas peek out of their box in Kielnarowa, Poland, June 11, 2014. A total of 35 female and 3 male alpacas were imported from Chile by the Rzeszow University of Information Technology and Management Center Zoo to be used for the therapy of children. Alpacas also provide one of the most expensive wools. (Photo by Darek Demanowicz/EPA) 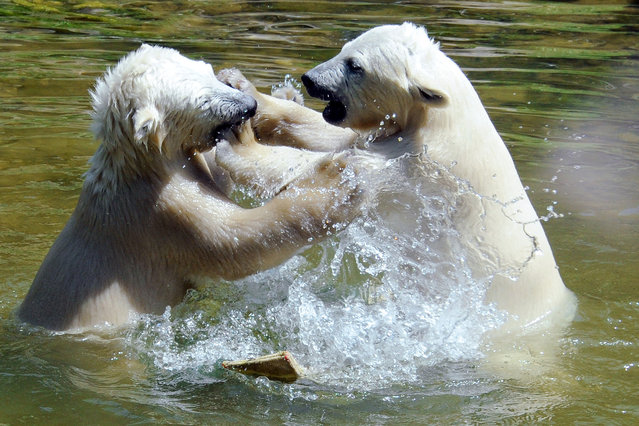 Two six month-old polar bears play in the water during warm and sunny weather in their enclosure at the Hellabrunn zoo in Munich, southern Germany, Thursday, June 12, 2014. (Photo by Rebecca Krizak/AP Photo/DPA) 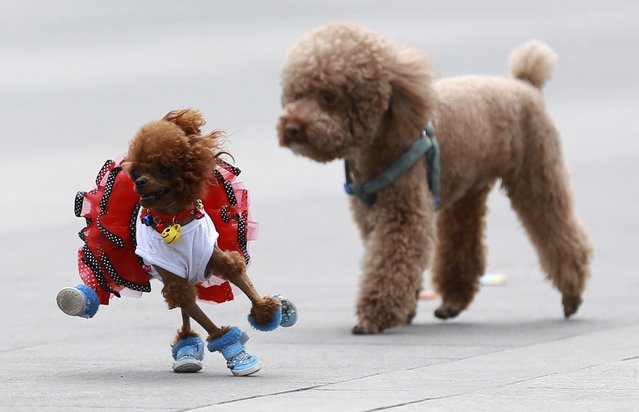 Poodles play at a square in Shenyang, Liaoning province, June 6, 2014. (Photo by Reuters/Stringer) 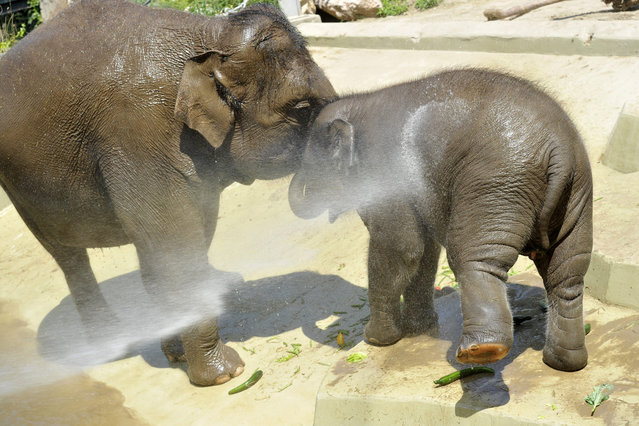 Sixteen-month old Indian elephant Asha and its mother Angele are sprinkled with water to cool them in their enclosure in the Budapest Zoo as the temperature reaches 33 degrees Celsius (91 Fahrenheit) in Budapest, Hungary, Wednesday, June 11, 2014. (Photo by Attila Kovacs/AP Photo/MTI) 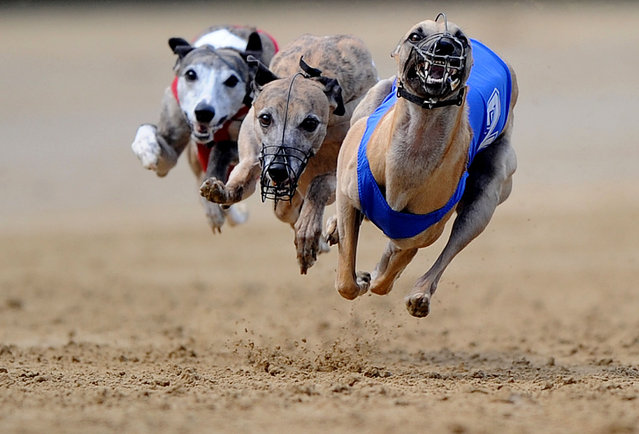 Whippets run during a dog race in Gelsenkirchen, Germany, on June 8, 2014. (Photo by Jonas Guettler/DPA) 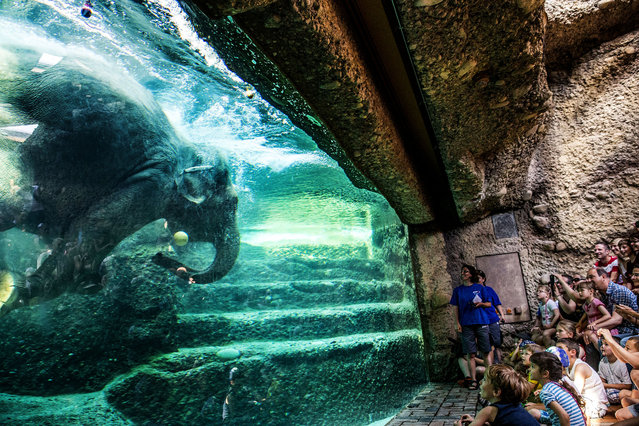