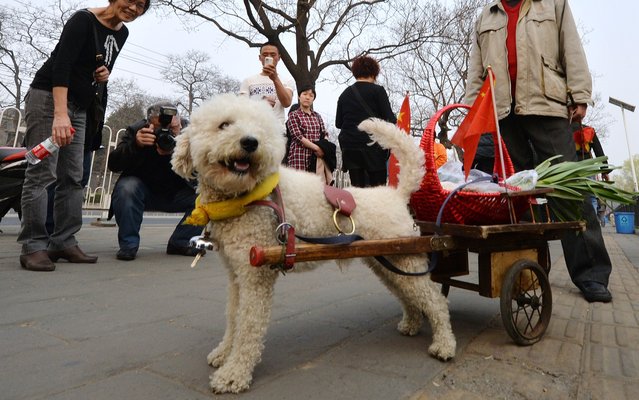 An elderly Chinese man (C) returns from a shopping trip with his dog Duoji who is pulling a small cart in Beijing on March 26, 2014. Dog ownership is popular amongst China’s elderly and the growing middle class but owners cannot legally keep dogs taller than 36 centimeters. (Photo by Mark Ralston/AFP Photo) 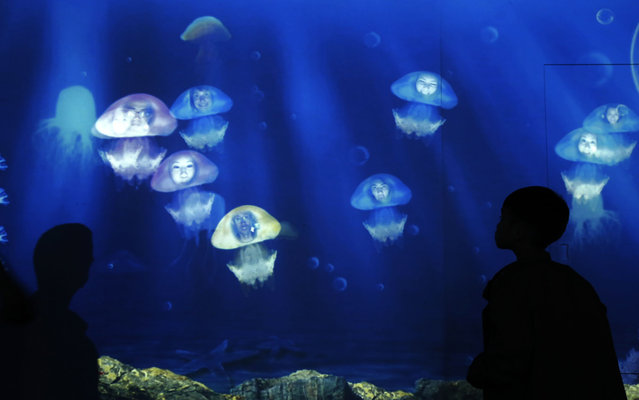 Visitors look at their portraits attached onto a projection of jellyfish images at the Hong Kong Ocean Park March 25, 2014. (Photo by Bobby Yip/Reuters) 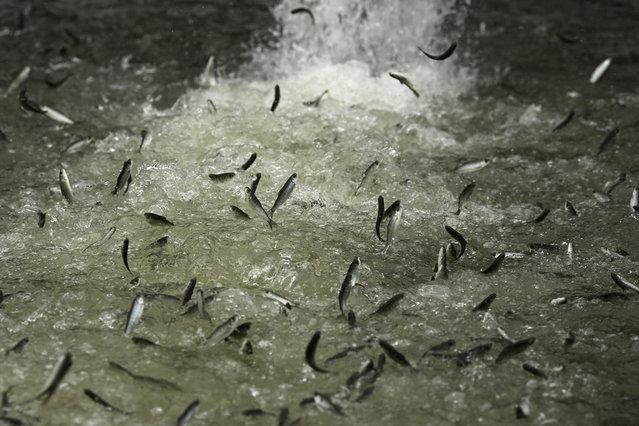 Thousands of young salmon are sent into a holding tank in the Sacramento River in Rio Vista, Calif., on March 25, 2014. The salmon were trucked more than 200 miles from a hatchery on the northern part of the river. Drought conditions in the state made the river impassable for young fish. (Photo by Robert Galbraith/Reuters) 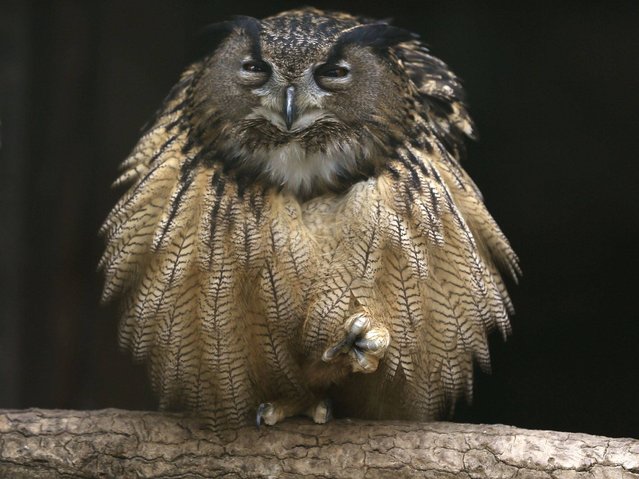 An eagle owl fluffs out its feathers as it sits on one foot on a branch in its enclosure at the Grugapark in Essen, Germany, on March 25, 2014. (Photo by Ina Fassbender/Reuters) 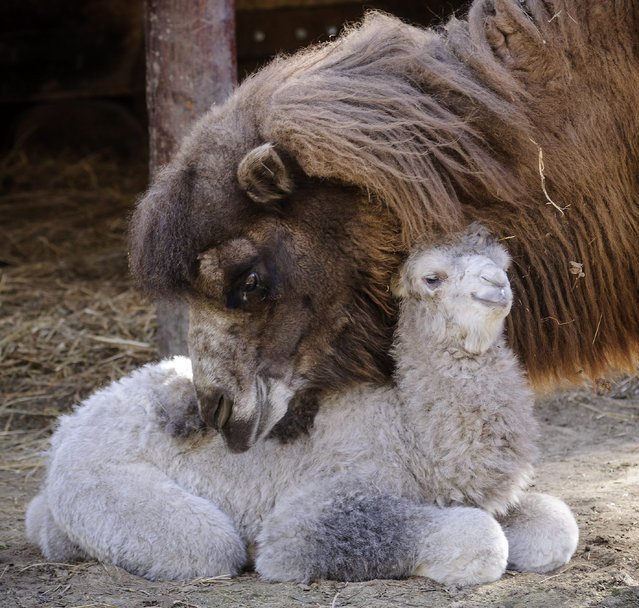 A newborn two-humped camel baby lies with its mother in its enclosure at Debrecen Zoo in Debrecen, 226 kms east of Budapest, Hungary, 21 March 2014. (Photo by Zsolt Czengledi/EPA) 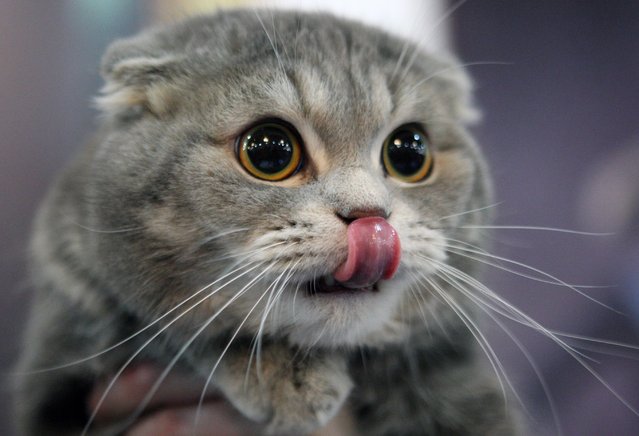 A “Scottish Fold” cat is seen during a cat exhibition in Bishkek, Kyrgyzstan, 23 March 2014. Cats breeders and owners from Kyrgyzstan and Kazakhstan gathered in Bishkek to present their feline pets. (Photo by Igor Kovalenko/EPA) 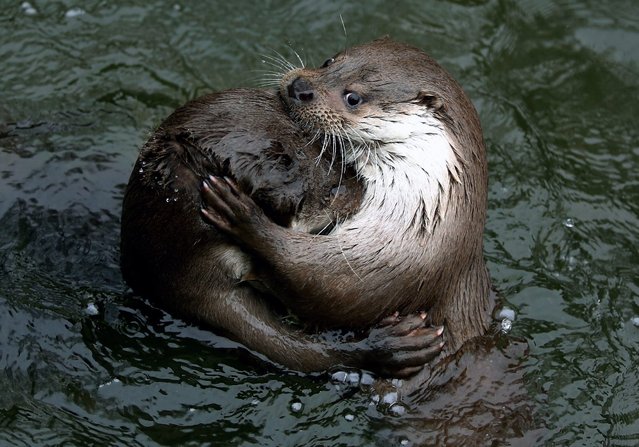 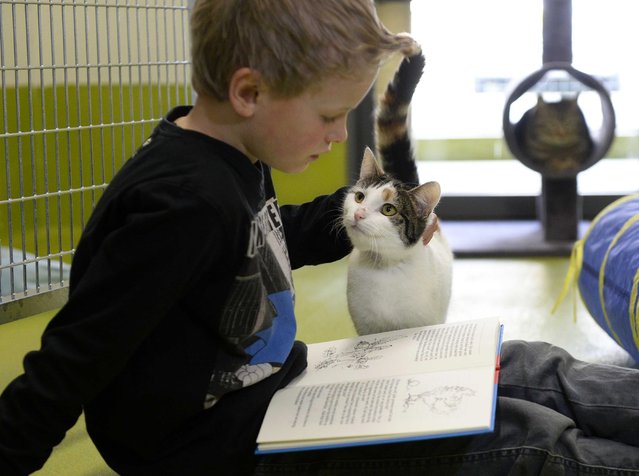 A child reads to a cat in the animal shelter in Amersfoort, The Netherlands, 26 March 2014. Both asylum cats and children benefit from the reading: the children in terms of improving their reading skills, the cats revel in hearing the sound of a voice. (Photo by Marco De Swart/EPA) 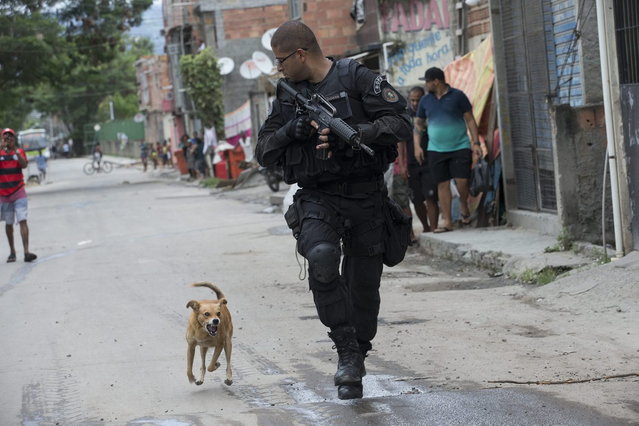 A Special Police Operations Battalion (BOPE) officer is chased by a barking dog during an operation in the Mare slum complex, ahead of its “pacification”, in Rio de Janeiro, Brazil, Wednesday, March 26, 2014. Elite federal police and army troops will be sent to the city to help quell a wave of violence in so-called “pacified” slums. Recent attacks on police bases in the favelas is raising concerns about an ambitious security program that began in 2008, in part to secure the city ahead of this year's World Cup and the 2016 Olympics. (Photo by Silvia Izquierdo/AP Photo) 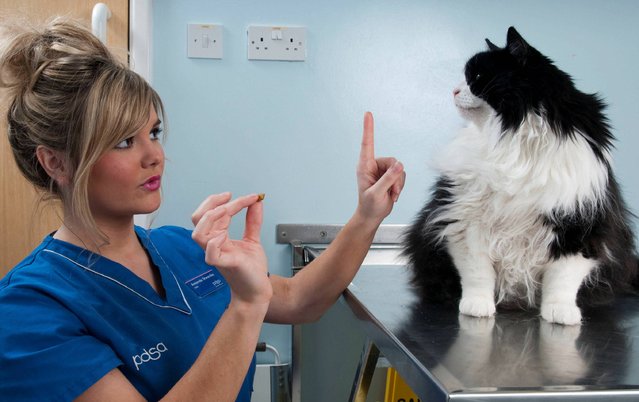 A handout photo issued by People's Dispensary for Sick Animals charity of PDSA Veterinary Nurse Amanda Shearsby with overweight cat Lucky as the charity is announcing its annual PDSA Pet Fit Club, which has been running for the last eight years, on March 27, 2014. Junk food and fatty treats are fuelling a tragic obesity crisis for British pets, new research has shown. Owners are giving more than 10 million animals high-calorie foods including take-aways, biscuits, chips and even alcohol, according to the People's Dispensary for Sick Animals (PDSA) charity. Around nine out of ten (87%) give pets treats, despite the fact that 91% realise the resulting obesity can reduce their pet's lifespan. (Photo by Nick McGowan-Lowe/PDSA/PA Wire) 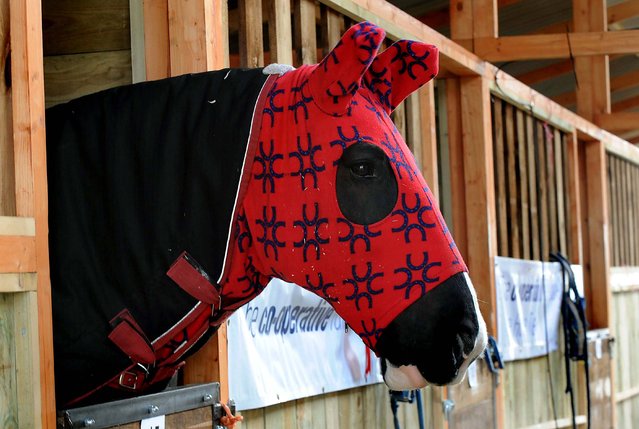 A Shire horse looks out of its stable during the National Shire Horse Show at Arena UK Showground, Allington, on March 23, 2014. (Photo by Rui Vieira/PA Wire) 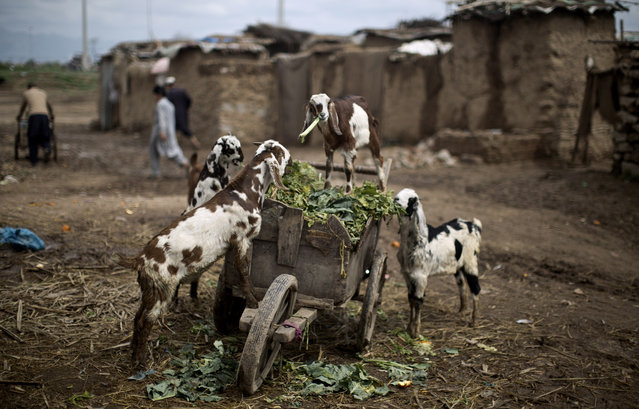 Goats eat vegetable leaves, from a wooden-cart belonging to a Pakistani man working in a wholesale fruit and vegetable market, in a poor neighborhood, on the outskirts of Islamabad, Pakistan, Tuesday, March 25, 2014. (Photo by Muhammed Muheisen/AP Photo) 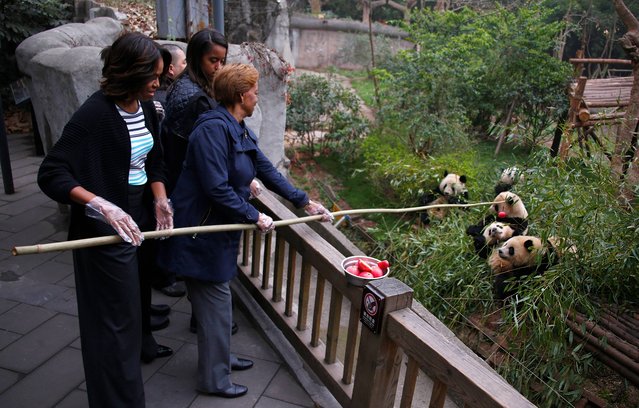 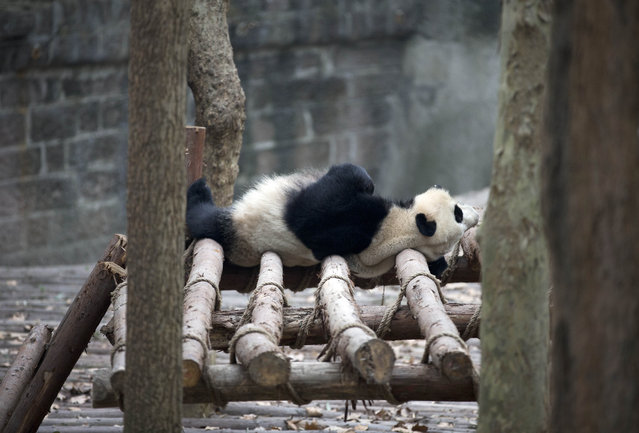 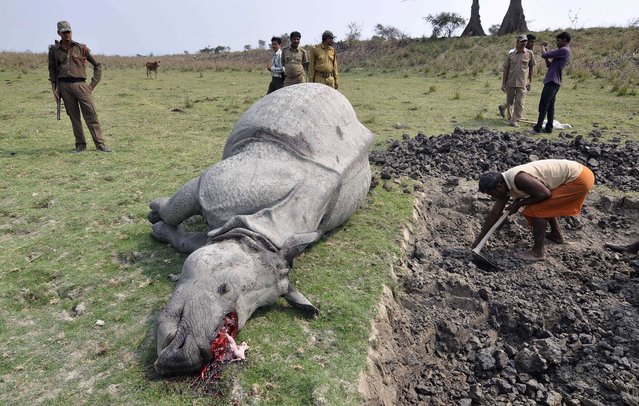 Indian forest officials and security personnel inspect the body of a one-horned rhinoceros which was killed and dehorned by poachers at the Pobitora Wildlife Sanctuary some 45kms from Guwahati in the northeastern state of Assam on March 26, 2014. Forest officials shot two poachers to death inside the sanctuary after they had killed the rhino. A third suspected poacher escaped with the animal's horn. (Photo by Biju Boro/AFP Photo) 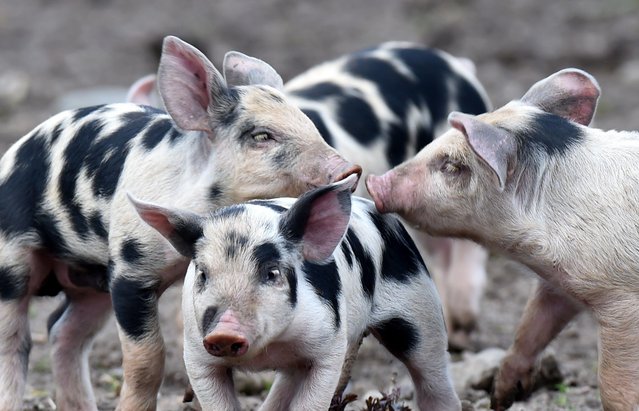 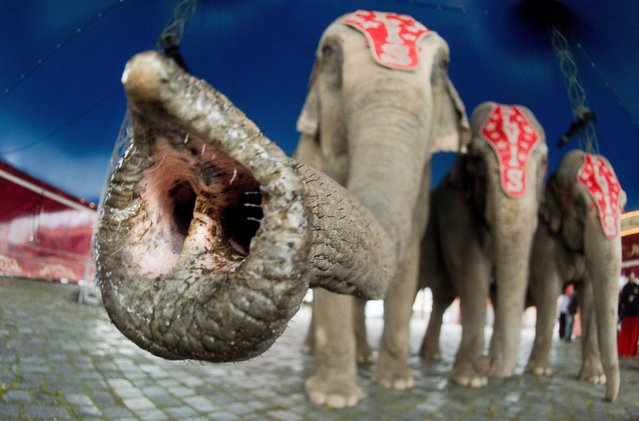 A curious elephant holds its trunk in front of the camera during the press event for the Circus Charles Knie in Hanover, Germany, March 24, 2014. The circus, with its 110 animals and 100 employees, will be in Hanover until April 6th. (Photo by Julian Stratenschulte/EPA) 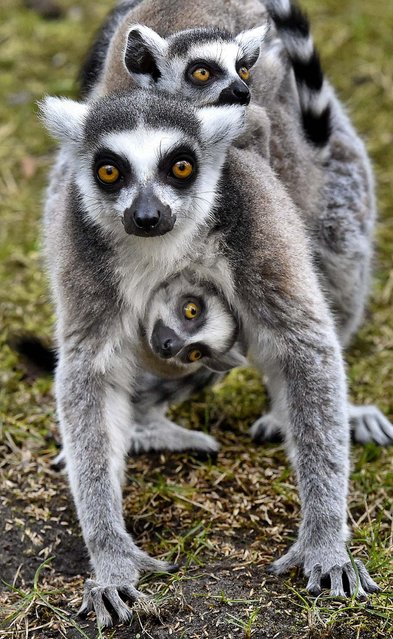 In this photo made available Tuesday, March 25, 2014, a female ring-tailed lemur (Lemur catta) carries her cubs through their enclosure at the zoo in Eberswalde, eastern Germany, Monday, March 24, 2014. (Photo by Patrick Pleul/AP Photo/DPA) 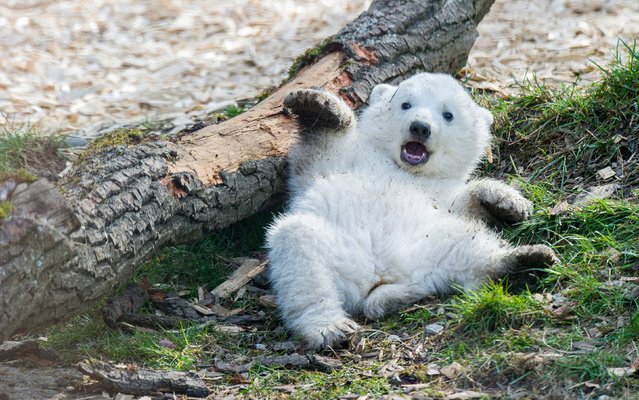 In this picture taken Saturday March 22, 2014, one of the polar bear twin cubs plays in the enclosure at Hellabrunn Zoo in Munich, Germany. The polar bear cubs were born on December 9, 2013 and were introduced this week to the public for the first time. (Photo by Marc Mueller/AP Photo/DPA) 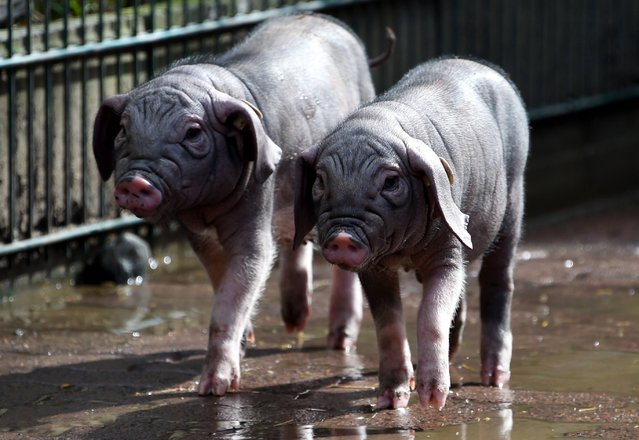 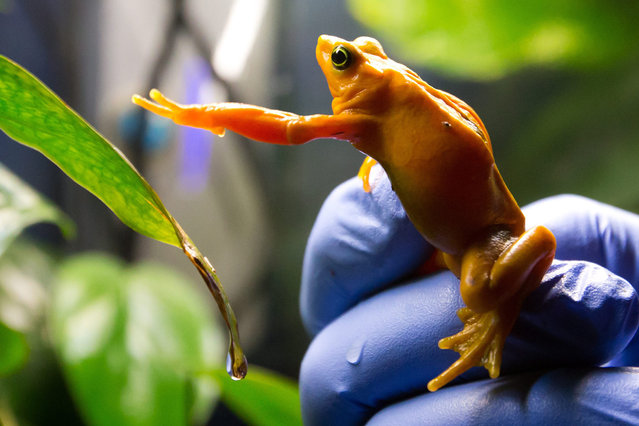 Vancouver Aquarium director of animal operations Dr. Dennis Thoney holds a Panamanian golden frog at the aquarium in Vancouver, British Columbia, on Thursday March 27, 2014. The aquarium has successfully bred the frogs, thought to be extinct in the wild, as part of a worldwide effort to preserve the species. They are native to the mountainous, higher-altitude regions of western-central Panama and the goal is to eventually re-populate their natural habitat in the country. (Photo by Darryl Dyck/AP Photo/The Canadian Press) 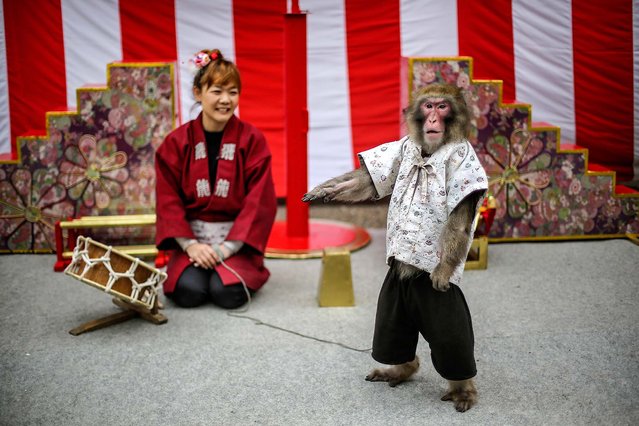 A monkey poses after a performance in front of spectators at a shrine in Tokyo, on March 26, 2014. (Photo by Eugene Hoshiko/Associated Press) 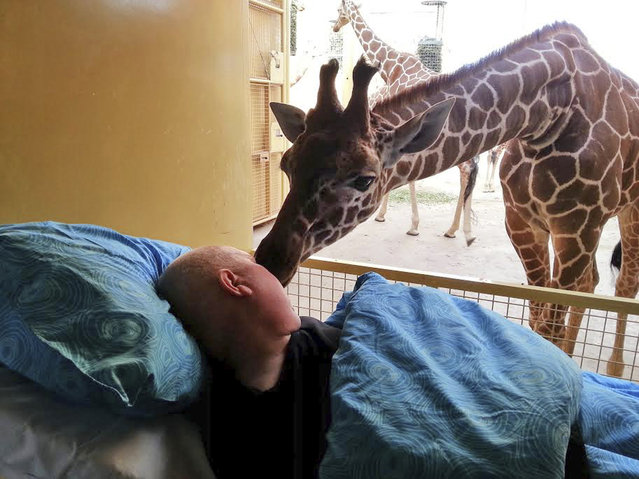 A tagging arrow detaches from its tag as scientists successfully tag the dorsal fin of an adult male Cuvier's beaked whale, in this undated handout photo obtained by Reuters on March 26, 2014. Scientists said on Wednesday they tracked these medium-sized whales off the coast of California using satellite-linked tags as the creatures dove down nearly 1.9 miles (2,992 meters) and spent two hours and 17 minutes underwater before resurfacing. Those figures represent both the deepest and the longest dives ever documented for any marine mammal. (Photo by Erin A. Falcone/Reuters/Cascadia Research) 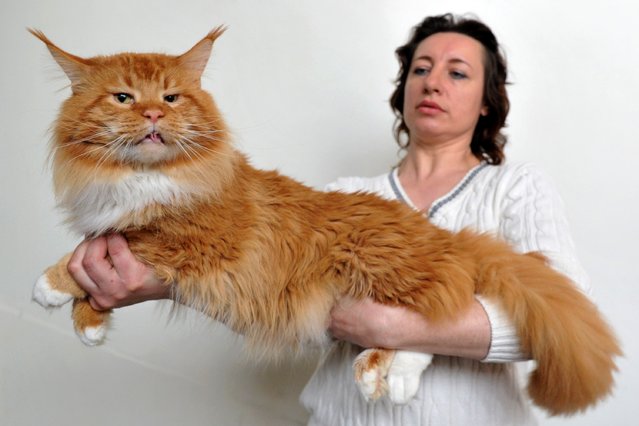 A woman and her Maine Coon cat pose during a cat exhibition in Bishkek on March 23, 2013. Cat lovers from Kyrgyzstan, Kazakhstan and Uzbekistan took part in the exhibition. (Photo by Vyacheslav Oseledko/AFP Photo) 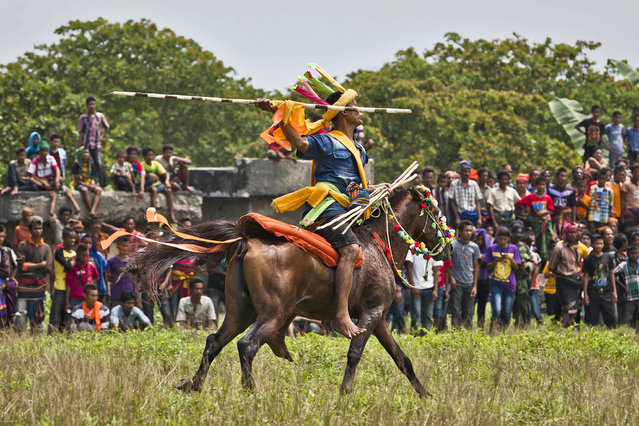 A Pasola rider prepares to throw his spear during the pasola war festival at Wainyapu village on March 25, 2014 in Sumba Island, Indonesia. The Pasola Festival is an important annual event to welcome the new harvest season, which coincides with the arrival of “Nyale” sea worms during February or March each year. Pasola, an ancient ritual fighting game, involves two teams of men on horseback charging towards each other while trying to hit their rivals with “pasol” javelins and avoid being hit themselves. (Photo by Ulet Ifansasti/Getty Images) 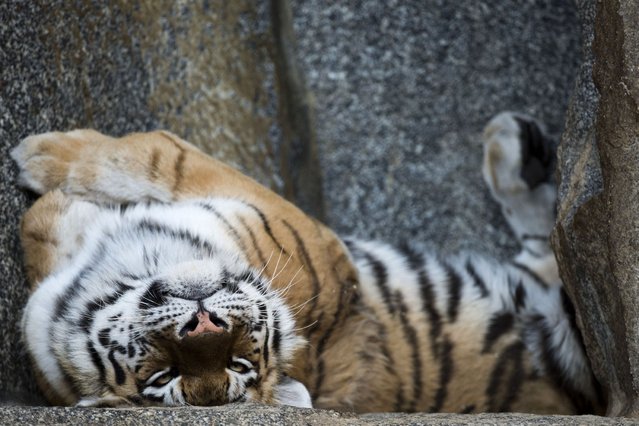 A Siberian tiger lies on its back in its enclosure at Berlin's Tierpark zoo on March 27, 2014. (Photo by John MacDougall/AFP Photo) 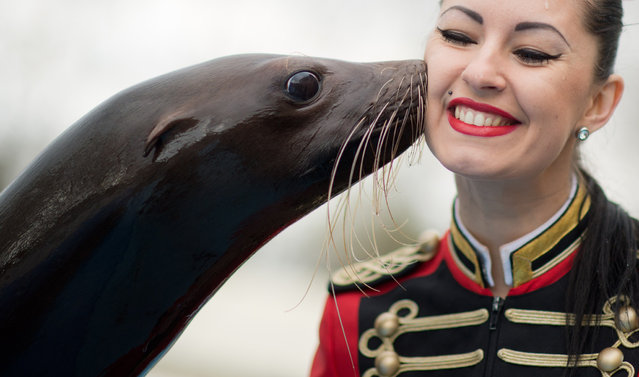 Seal “Steffi” kisses circus assistant Victoria during a photo call at the Circus Charles Knie in Hanover, central Germany, on March 24, 2014. The circus with 110 animals and 100 employees gives guest performances in Hanover until April 6, 2014. (Photo by Julian Stratenschulte/AFP Photo/DPA) 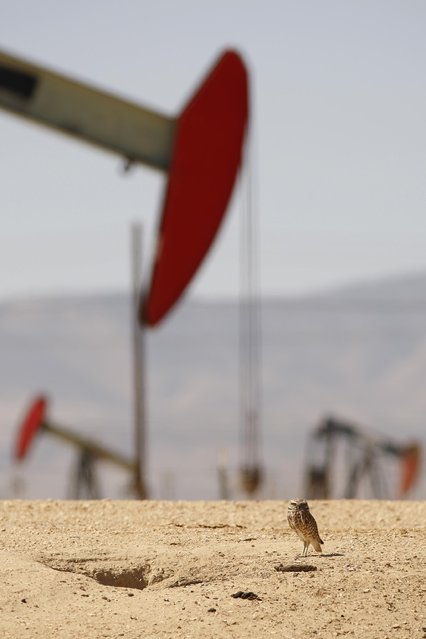 A burrowing owl stands next to its burrow near pump jacks in an oil field over the Monterey Shale formation where gas and oil extraction using hydraulic fracturing, or fracking, is on the verge of a boom on March 23, 2014 near Lost Hills, California. Critics of fracking in California cite concerns over water usage and possible chemical pollution of ground water sources as California farmers are forced to leave unprecedented expanses of fields fallow in one of the worst droughts in California history. Concerns also include the possibility of earthquakes triggered by the fracking process which injects water, sand and various chemicals under high pressure into the ground to break the rock to release oil and gas for extraction though a well. The 800-mile-long San Andreas Fault runs north and south on the western side of the Monterey Formation in the Central Valley and is thought to be the most dangerous fault in the nation. Proponents of the fracking boom saying that the expansion of petroleum extraction is good for the economy and security by developing more domestic energy sources and increasing gas and oil exports. (Photo by David McNew/Getty Images) 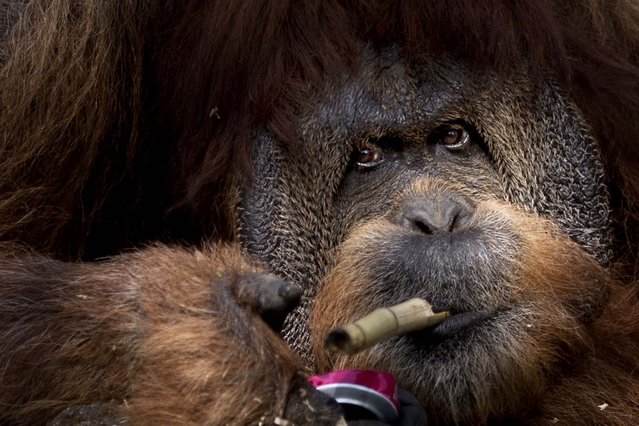