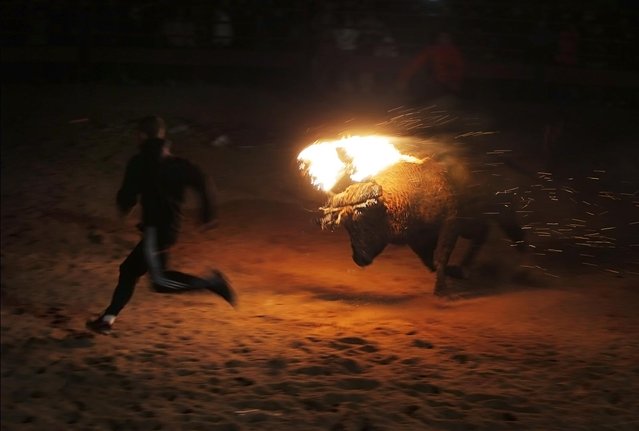 A fire bull chases a reveler during the “Toro de Jubilo” Fire Bull Festival in Medinaceli, Spain, Sunday, November 10, 2013,. Fire bull Festival “Toro de Jubilo” that takes place in the main square of Medinaceli is an ancient tradition from the bronze age. During the event a bull is tied to a pylon and flammable balls attached to the bull's horns are set on fire before the animal released. Revelers dodge the bull when it comes close until the flammable material is consumed. The bull is covered with a thick layer of mud on the back and face to protect it from burns. (Photo by Andres Kudacki/AP Photo) 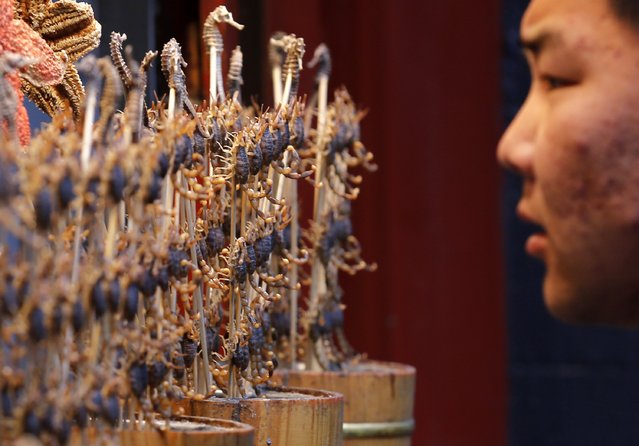 A man looks at sticks of deep-fried scorpions and seahorses displayed for sale at a food stall in Beijing November 14, 2013. The scorpions, which are fried in cooking oil, are sold for 25 yuan ($4) per stick and are commonly eaten as street snacks. (Photo by Kim Kyung-Hoon/Reuters) 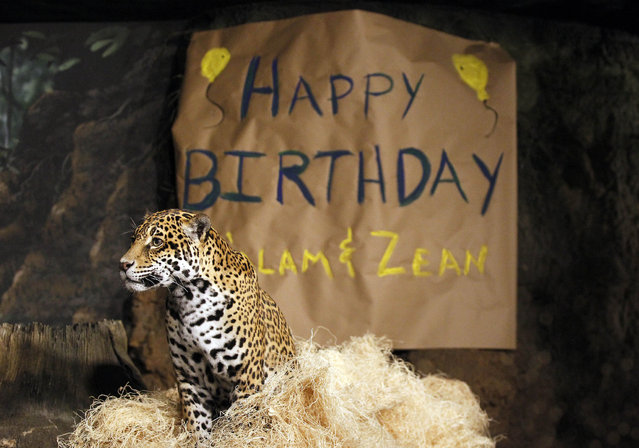 Stella, the mother to jaguar cubs Balam and Zean sits near a happy birthday sign as her cubs celebrate their 1st birthdays in the Florence Mila Borchert Big Cat Country at the Milwaukee County Zoo on Tuesday, November 12, 2013. Balam and Zean were born one year ago on November 13, to mother Stella and wild-born father, Pat. Pat's genes are incredibly valuable for the conservation of the species, because he is a wild-born animal. (Photo by Mike De Sisti) 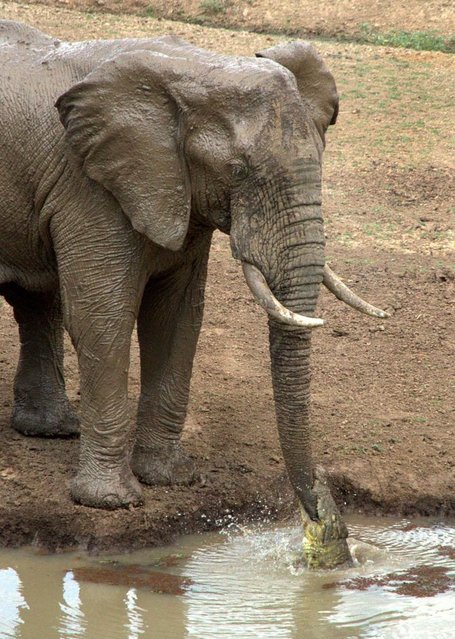 The remarkable scene was captured by amateur wildlife photographer Ian Salisbury, 62, at the South Luangwa National park in Zambia. The crocodile grabs hold of the elephant's trunk, but it soon becomes clear that he has bitten off a lot more than he can chew by grabbing the huge beast. Mr Salisbury said the elephant “fled rapidly into the bush” after the attack. (Photo by Ian Salisbury/Caters News) 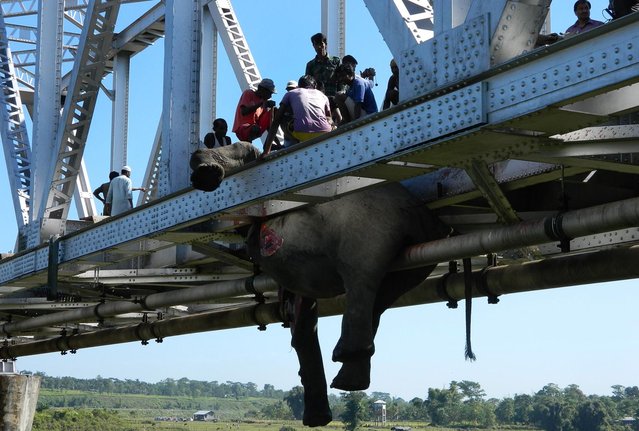 Indian forest department personel inspect the carcass of an elephant which was hit by a speeding train on a railway bridge at Jaldhaka village, Khunia range in Jalpaiguri district in eastern West Bengal state on November 14, 2013. At least seven elephants were killed after a passenger train hit a herd of elephants while they were crossing a railway track near a bridge, local media reported. (Photo by AFP Photo) 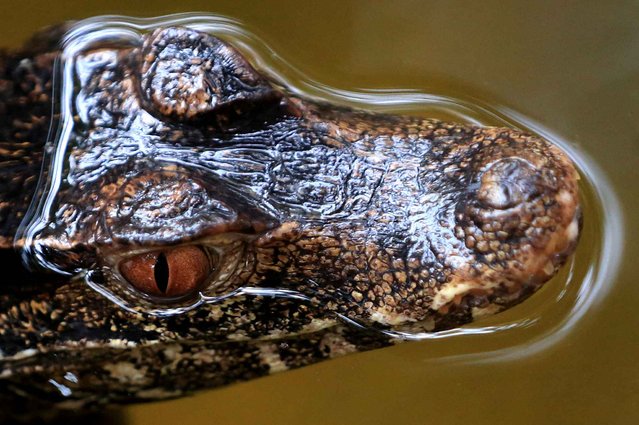 A Cuvier's dwarf caiman swims around in Magdeburg, Germany, on November 12, 2013. (Photo by Jens Wolf/AFP Photo/DPA) 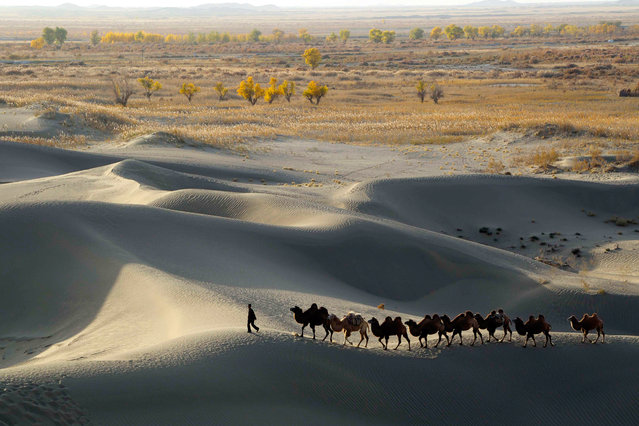 A man leads camels at the edge of the Taklamakan Desert in Xinjiang Uighur Autonomous Region, October 29, 2013. (Photo by Reuters/China Daily) 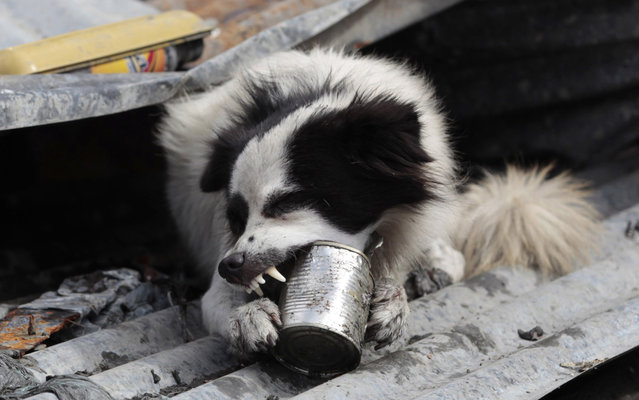 A dog takes a bite on an empty canned food as it searches for food in typhoon-hit Tacloban city, Leyte province, central Philippines on Wednesday, November 13, 2013. Typhoon Haiyan, one of the strongest storms on record, slammed into six central Philippine islands on Friday leaving a wide swath of destruction. (Photo by Aaron Favila/AP Photo) 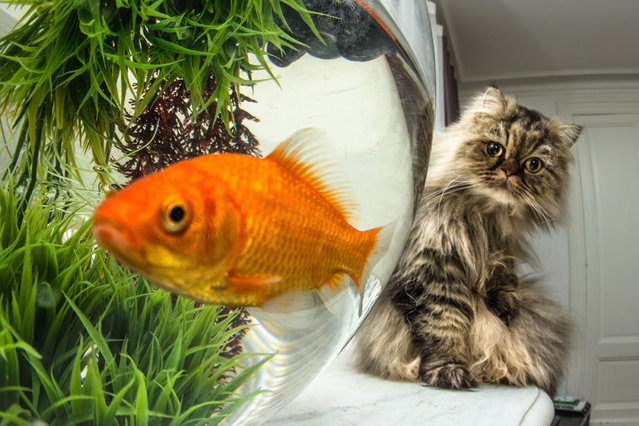 This goldfish could be forgiven for looking a little nervous as a mischievous cat watched it swim around a bowl. (Photo by Xabi Barreneche/Solent New) 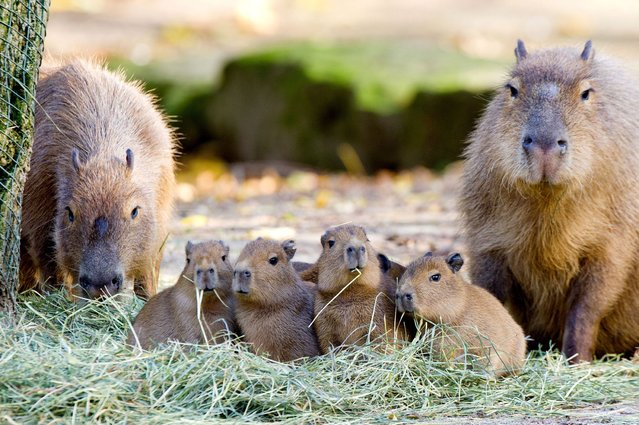 Four young capybaras are flanked by their parents in their enclosure at the Hannover Zoo (Niedersachsen), on November 13, 2013. (Photo by Christoph Schmidt/AP Images/DPA) 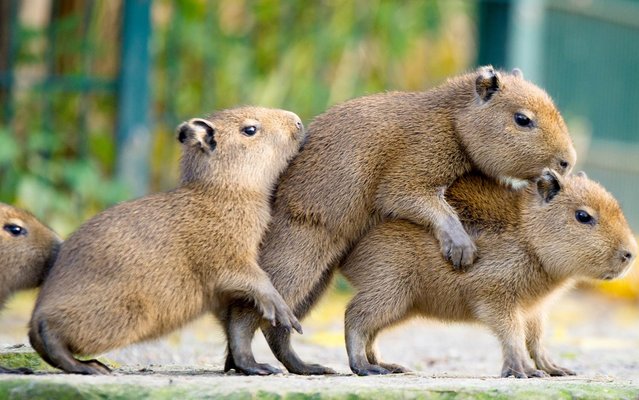 Young capybara romp in their enclosure at the zoo in Hanover (Lower Saxony), on November 14, 2013. (Photo by Christoph Schmidt/AP Images/DPA) 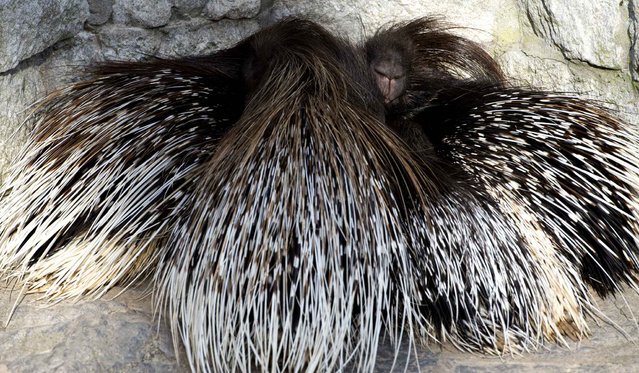