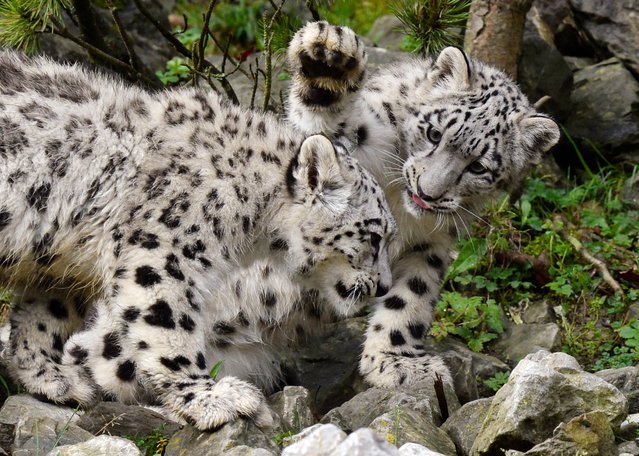 The two snow leopard twins Okara and Orya play at the zoo in Zurich, Switzerland, Wednesday, October 15, 2014. The cubs were born five and a half months ago. (Photo by Steffen Schmidt/AP Photo/Keystone) 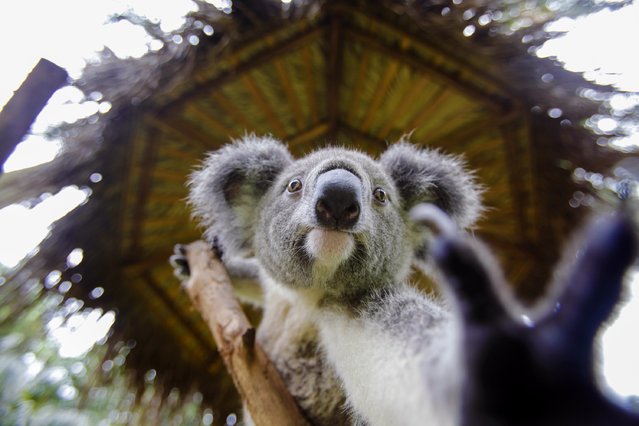 A koala climbs on a tree at the zoo of “Chimelong Paradise”, in Guangzhou, Guangdong province, October 15, 2014. (Photo by Alex Lee/Reuters) 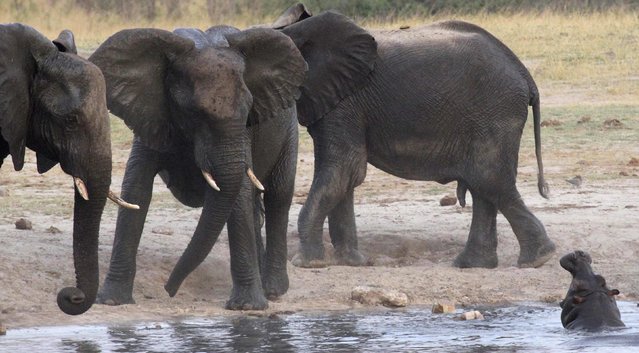 A herd of elephants confronts a hippopotamus at a watering hole in Hwange National Park October 14, 2014. The watering hole was one of several that were contaminated by poachers with cyanide in 2013, leading to the death of at least 100 animals, according to Zimbabwean authorities. Picture taken October 14, 2014. (Photo by Philimon Bulawayo/Reuters) 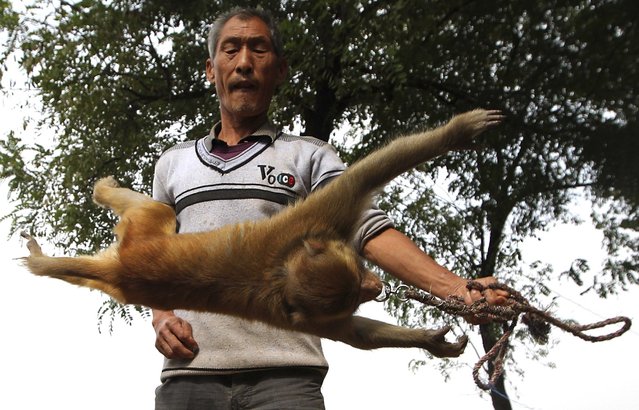 Huahua, a three-year-old monkey, plays with Yang Lingui, in Xinye county, Henan province, October 15, 2014. Yang, 58, and his family earn a living by training and performing with monkeys, which was traditionally the most popular profession of the county. In the past, Yang and his fellow village performers travelled around the country to perform, but now they hardly get a single show invite. Even worse, four of the performers from Xinye were convicted earlier this year for transporting rare animals without license, a document the villagers claimed almost impossible for them to be granted from the government. (Photo by Reuters/Stringer) 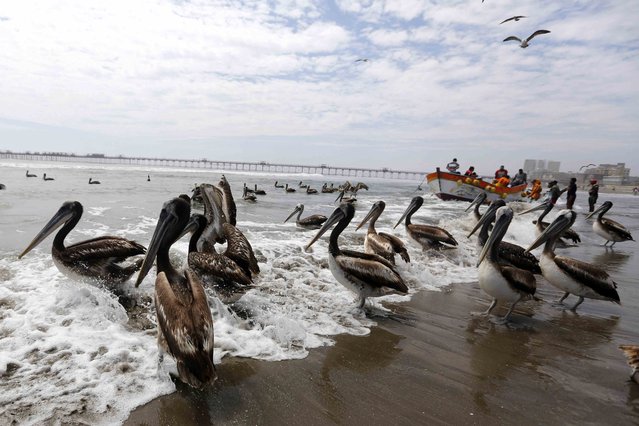 Pelicans are pictured on the shore as a fishing boat arrives at the port of Pimentel in the northern coast of Lambayeque, October 17, 2014. (Photo by Mariana Bazo/Reuters) 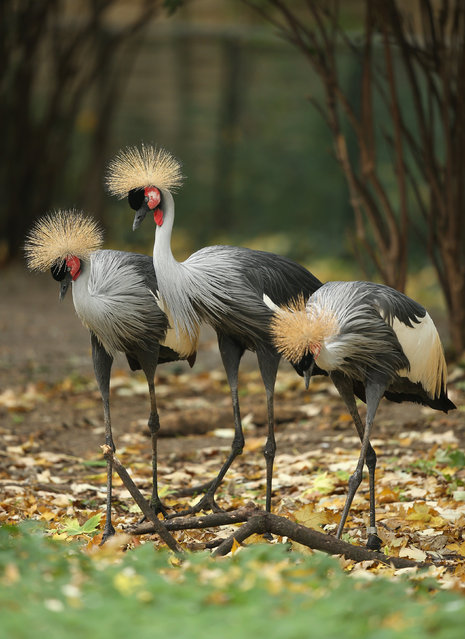 Grey crowned cranes (balearica pavonina gibbericeps, in German: Heller Kronenkranich) stand in their enclosure at Zoo Berlin zoo on October 14, 2014 in Berlin, Germany. The grey crowned crane is native to southeastern Africa and is the continent's most populous crane species. (Photo by Sean Gallup/Getty Images) 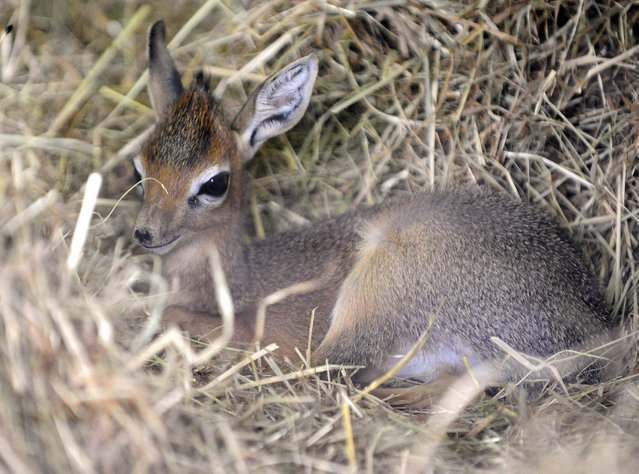 A picture taken on October 16, 2014 shows a new born Kirk's dik-dik at the zoological park of the eastern French city of Amneville. (Photo by Jean-Christophe Verhaegen/AFP Photo) 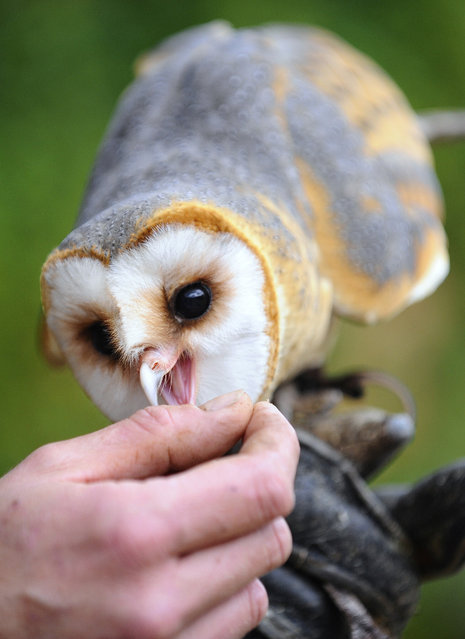 A picture taken on October 16, 2014 shows a young Barn Owl at the zoological park of the eastern French city of Amneville. (Photo by Jean-Christophe Verhaegen/AFP Photo) 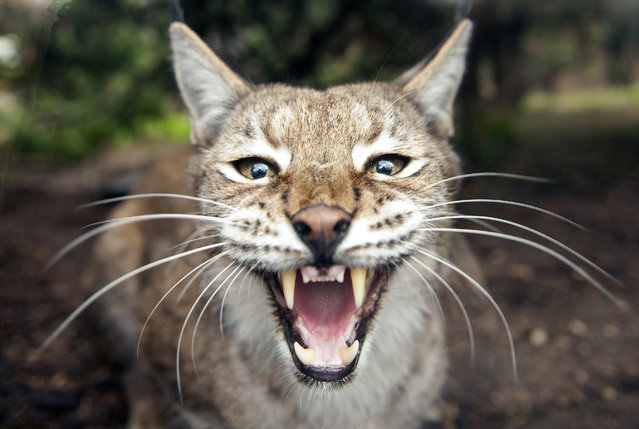 A picture taken on October 16, 2014 shows an Eurasian lynx at the zoological park of the eastern French city of Amneville. (Photo by Jean-Christophe Verhaegen/AFP Photo) 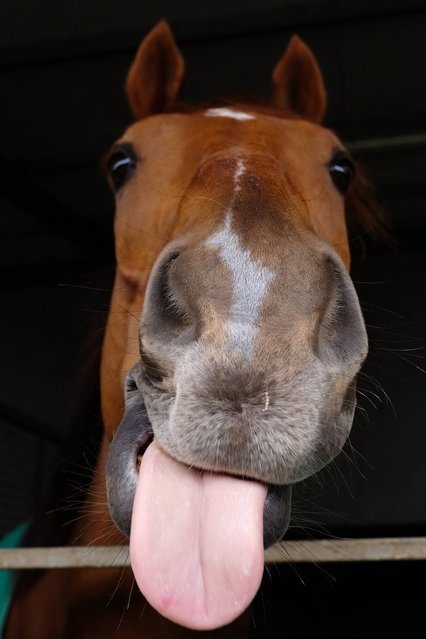 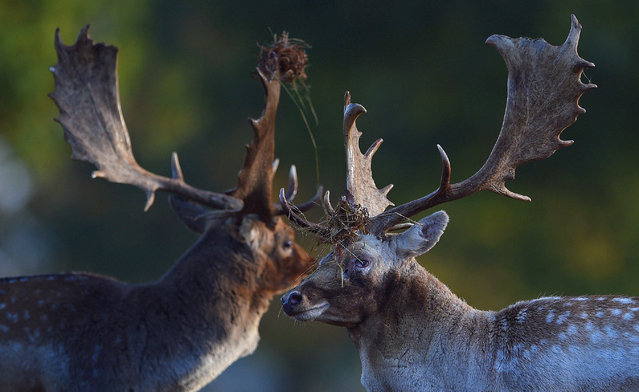 Fallow deer during the rutting season on October 17, 2014 in Bradgate Park, Leicestershire, United Kingdom. Autumn sees the start of the “Rutting” season, stags can be heard roaring and barking in an attempt to attract females known as bucks. The larger males can also be seen clashing antlers with rival males. (Photo by Michael Regan/Getty Images) 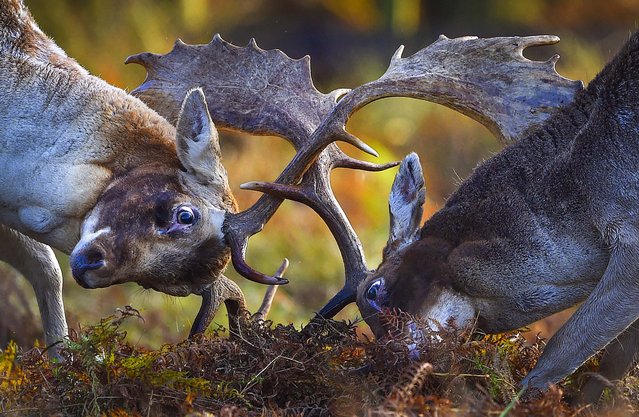 Fallow deer challenge each other during the rutting season in Leicestershire, United Kingdom. Stags can be heard roaring and barking in an attempt to attract females. (Photo by Michael Regan/Getty Images) 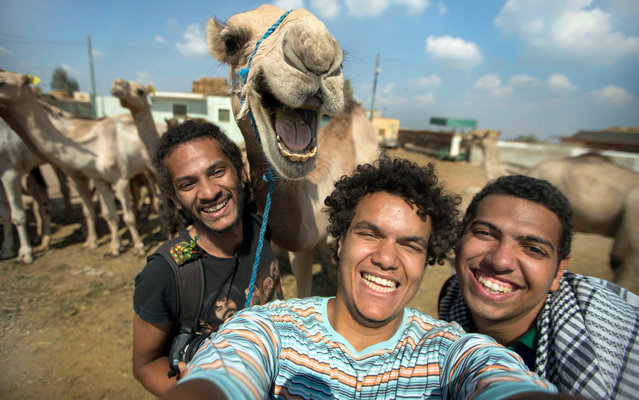 This camel clearly didnt get the hump about having its picture taken after posing for a selfie. Pictured joining in with the group photo, the hilarious photo shows the delighted desert dweller smiling happily for the camera. Captured by friends Hossam Antikka, 20, Karem Abdelaziz, 22, and Misara Salah, 24, the group spent around half an hour feeding the camel before deciding to take a snap of their new found friend. (Photo by Karem Abdelaziz/Caters News) 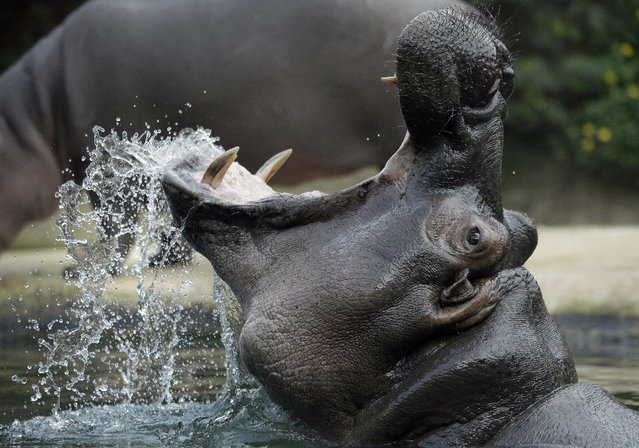 A hippo opens its mouth as it takes a bath at the Zoo in Berlin, Germany, Tuesday, October 14, 2014. (Photo by Michael Sohn/AP Photo) 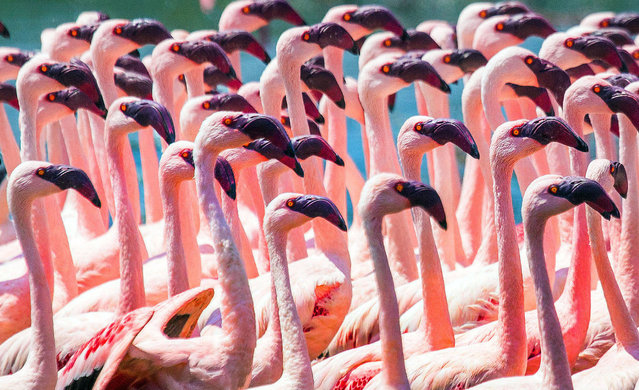 The flock of flamingos at Lake Bogoria in Kenya. Captured congregating in their thousands, the brightly coloured birds are able to transform the skyline as far as the eye can see. Known for their vivid pink plumage, the long legged waders get their unique colour from the pigmentation found in the organisms they eat. Taken by Russian photographer, Andrey Gudkov, 42, the wildlife lover visited various lakes in Africa and Brazil to photograph one of natures most stunning spectacles. In fact, during mating season, it has been known for over one million individual flamingos to appear in a single gathering. (Photo by Andrey Gudkov/Caters News) 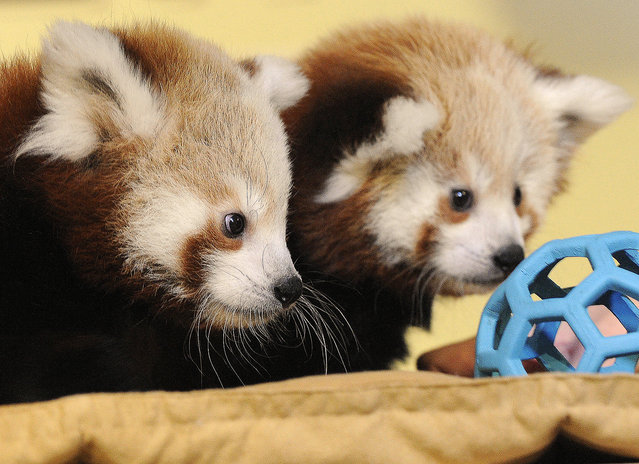 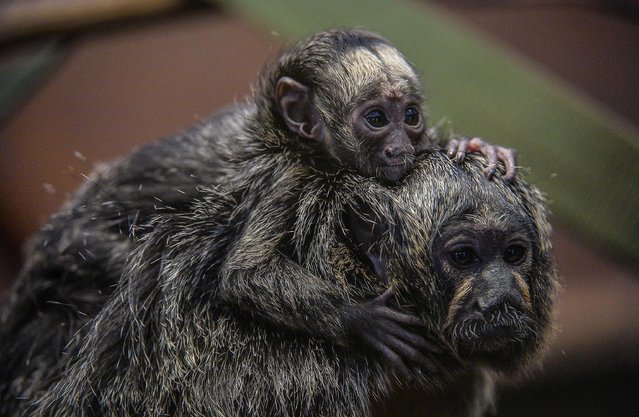 This is the adorable moment a newborn monkey hitched a ride with his mum. The six-week old Saki monkey latched on to mum Tabiti after being unveiled to visitors at Chester Zoo. Native to south America, the white-faced monkey was born on September 2 and was recently shown off to guests at the zoo. Keepers said the wide-eyed infant is taking well to its new environment and that he is being well looked after by mum Tabiti and dad Kwinti. (Photo by Chester Zoo/Mercury Press/Caters News) 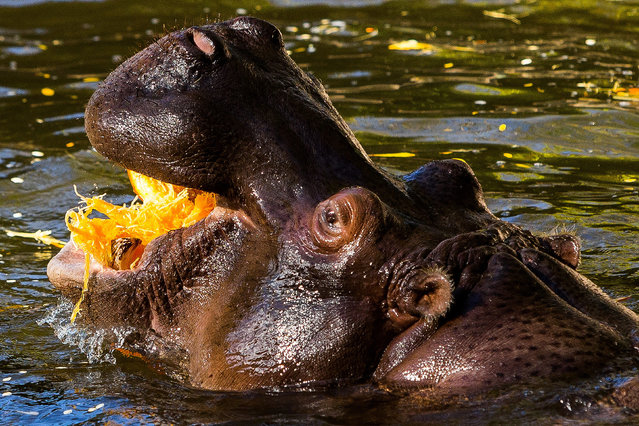 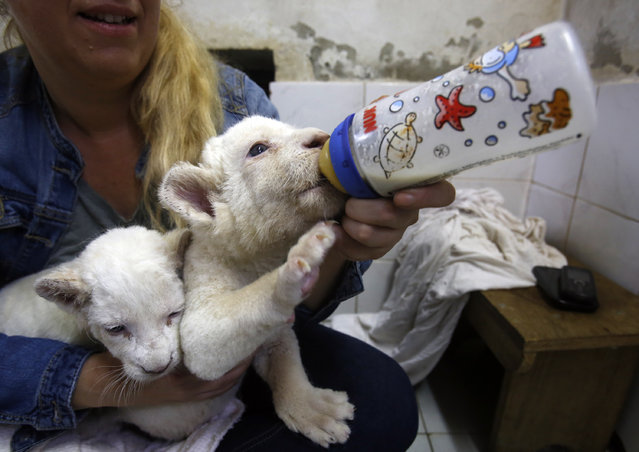 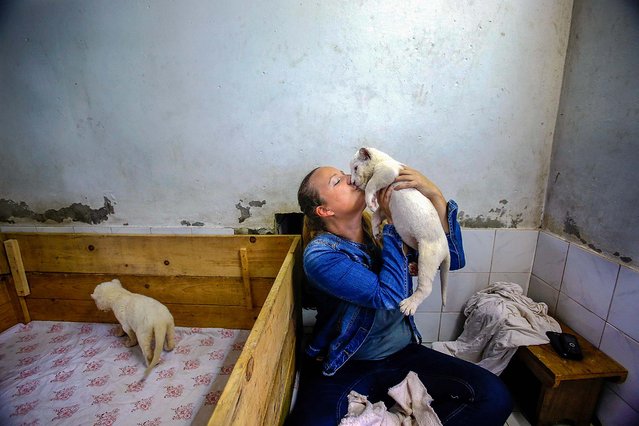 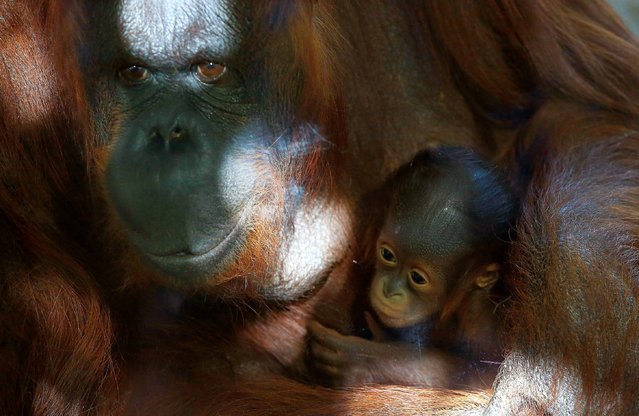 A Bornean orangutan Bess, left, shows off her six-week-old baby boy on the first day the Phoenix Zoo is allowing the two to be seen by the public Monday, October 13, 2014, in Phoenix. The still unnamed Bornean orangutan newborn will spend the first four or five months on their mothers, clinging tightly. (Photo by Ross D. Franklin/AP Photo) 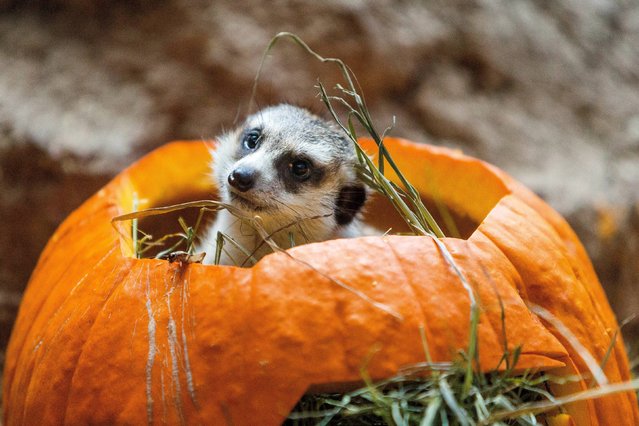