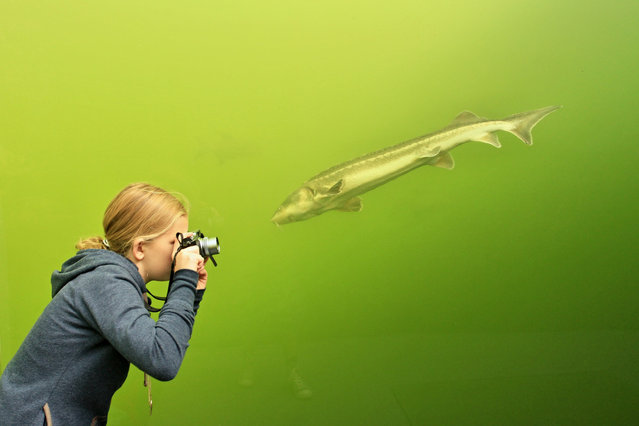 A girl takes a photo of a fish through the transpaent walls of a tunnel in a lake in Madra, 70 km southeast from Brno, South Moravia, Czech Republic on September 30, 2013. The tunnel, which is located at a depth of three meters, measuring eight meters in length from which one can observe sturgeon, carp, catfish, perch, tench, eell and trout. (Photo by Radek Mica/AFP Photo) 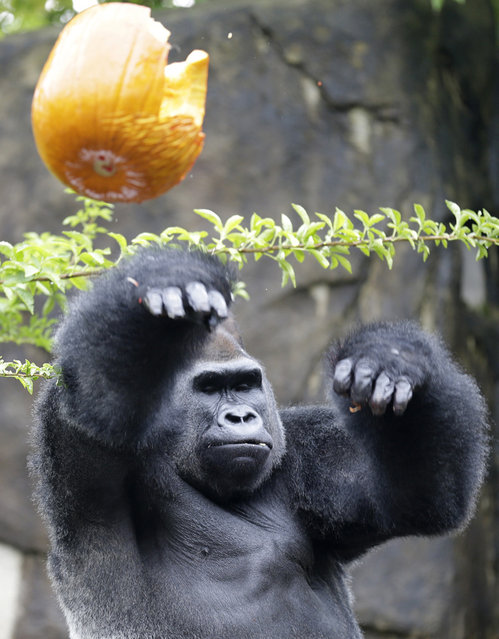 Jomo, a silverback gorilla, throws a Halloween pumpkin, Thursday, Oct. 3, 2013, at the Cincinnati Zoo in Cincinnati. The gorillas were enjoying the zoo's annual Pumpkin Hunt where they fill pumpkins with treats, such as granola, raisins, sunflower seeds, peanuts, grapes, popcorn and apples. (Photo by Al Behrman/AP Photo) 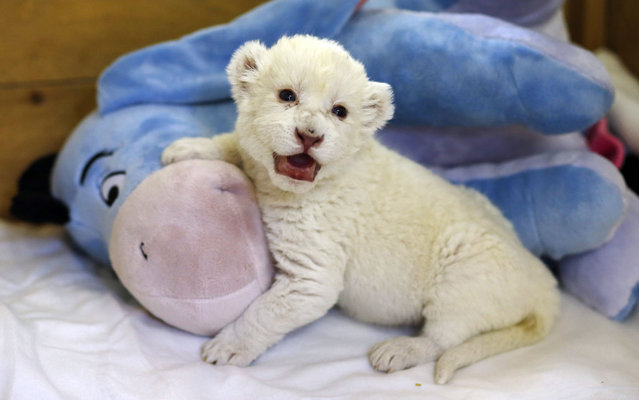 An eight-day-old white lion cub plays with a soft toy donkey at Belgrade's “Good hope garden” Zoo, October 4, 2013. The female white lion cub, still unnamed, was born eight days ago to parents Masha and Wambo. A male was also born but died. Belgrade zoo has a total of 11 white lions, which are extinct in the wild and are found only in zoos and reservations. It is estimated that there are around 500 living in captivity around the world. (Photo by Marko Djurica/Reuters) 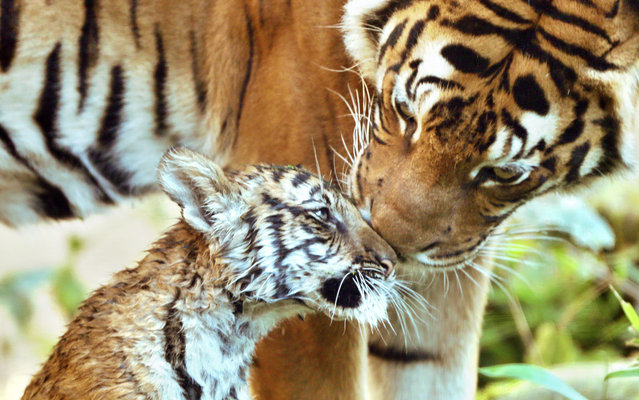 Female tiger cub Sahaja (L) enjoys the cuddling of her mother Cindy in their enclosure at the Zoo in Halle/Saale in eastern Germany on October 1, 2013. The tiger cub was born June 21, 2013 and named Sahaja , “The only one” since her two siblings died after birth. (Photo by Jan Woitas/AFP Photo/DPA) 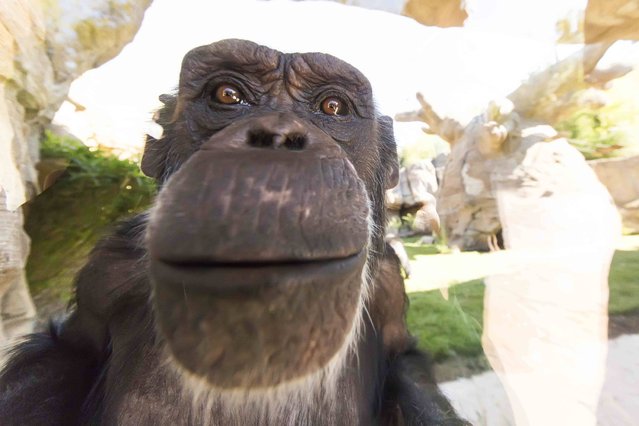 A Chimpanzee is seen with funny expressions at Hanover Zoo on September 27, 2013 in Hanover, Germany. (Photo by Barcroft Media) 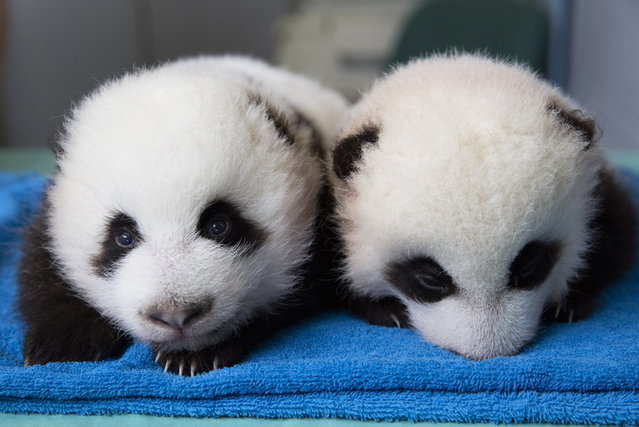 Two male giant panda cubs are shown in this handout provided by The Atlanta Zoo in Atlanta, Georgia, October 3, 2013. The Zoo is giving members of the public a chance to vote on a pair of names for the baby giant pandas born there in July. Five sets of names were released on Thursday for voters to choose from for the male cubs. (Photo by Adam K.Thompson/Reuters/Atlanta Zoo) 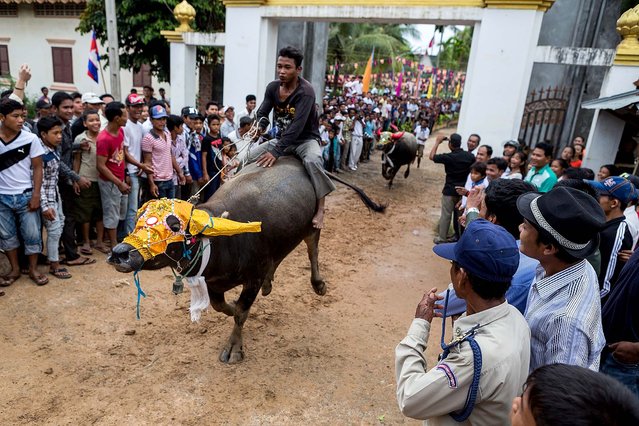 Buffalo riders compete during annual races held as part of the Festival of the Dead in Vihear Sour, Cambodia, on October 4, 2013. Riders race in teams of two, competing over several heats to determine the overall winner. Horse and buffalo races take place every year during Pchum Ben, Cambodia's annual festival that pays respect to deceased relatives over several generations. (Photo by Nicolas Axelrod/Getty Images) 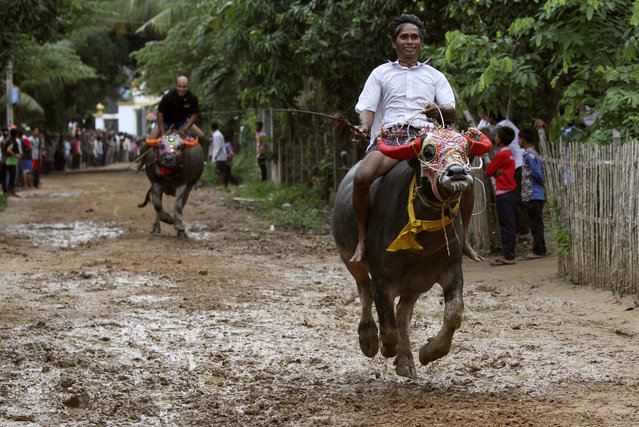 Men ride on buffaloes during the annual buffalo-racing ceremony at Virhear Sour village in Kandal province, 30 km (19 miles) southeast of Phnom Penh October 4, 2013. The ceremony, which started more than 70 years ago, is held to honour the Neakta Preah Srok pagoda spirit. It also marks the end of the Festival of Pchum Ben, which runs from September 20 to October 4. After the ceremony, the buffaloes are sold to the highest bidder. (Photo by Samrang Pring/Reuters) 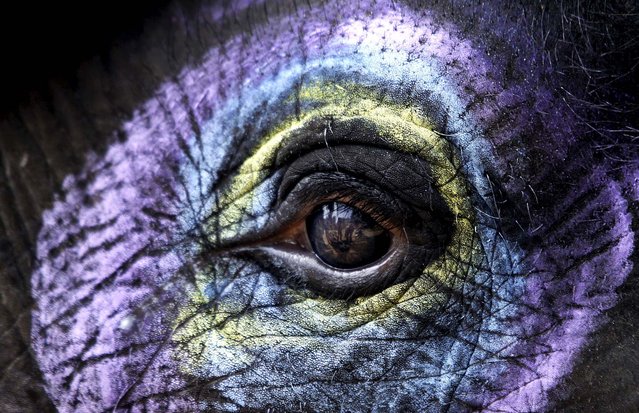 A decorated elephant stands at the Nandankanan Zoological park on the outskirts of the eastern Indian city of Bhubaneswar, on October 4, 2013. Wild life week is celebrated in India from October 2 to 8. (Photo by Biswaranjan Rout/Associated Press) 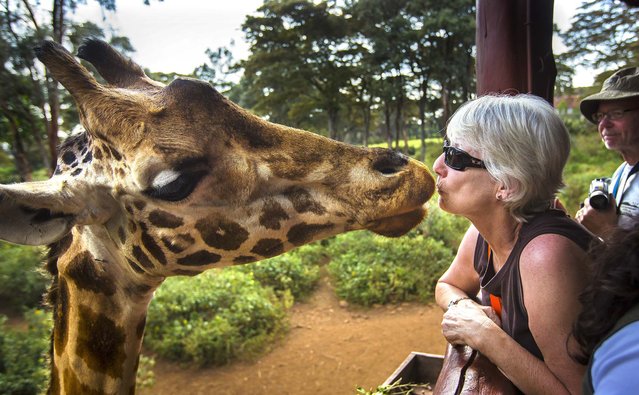 A giraffe eats a food pellet from the mouth of a foreign visitor at the Giraffe Center in Nairobi, Kenya, on September 30, 2013. (Photo by Ben Curtis/Associated Press) 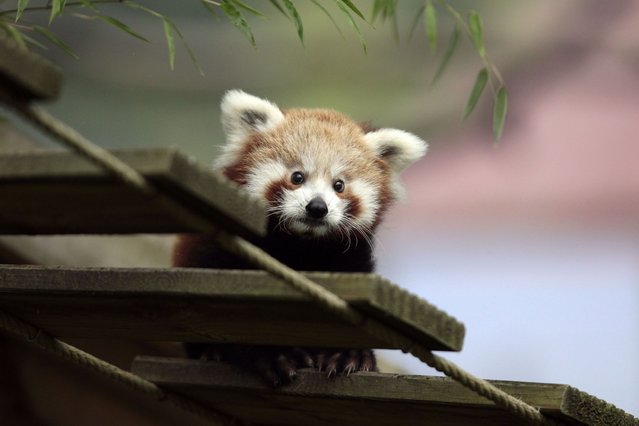 One of the two baby red pandas, named Ying and Yang and born on June 22, stands in an enclosure at the Cerza Zoo in Hermival-les-Vaux, France, on October 1, 2013. (Photo by AFP Photo) 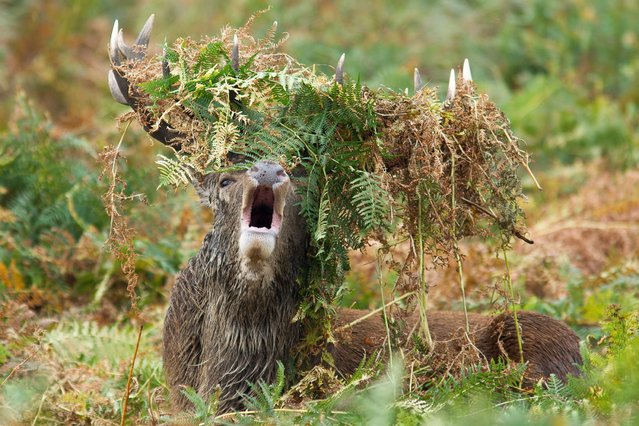 This mighty stag proves he's truly king of the forest with a crown of leaves. (Photo by Geg Morgan/Solent News & Photo Agency) 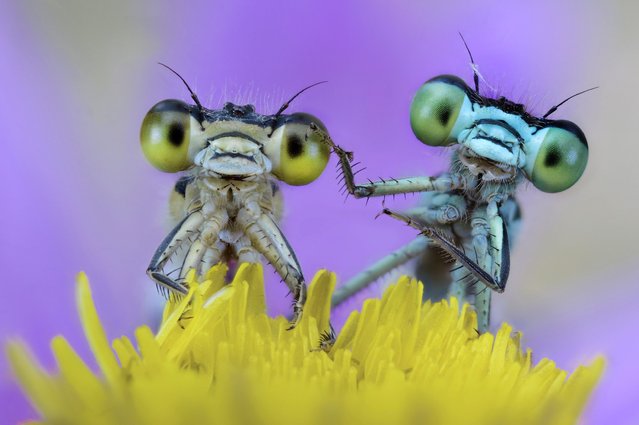 These vividly coloured damselflies show they are best buddies, looking like they're holding hands as they cuddle up on a flower, on October 1, 2013. (Photo by Alberto Ghizzi Panizza/Solent News & Photo Agency) 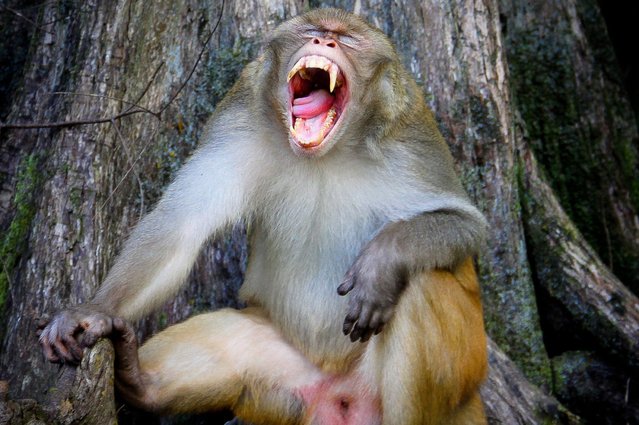 An alpha male called King Phillip or snaggle tooth because of his right fang hanging over his lower lip, is seen demonstrating a “threat call” along the shoreline of the Silver River, on October 3, 2013. (Photo by Ocala Star-Banner/Landov/Barcroft Media) 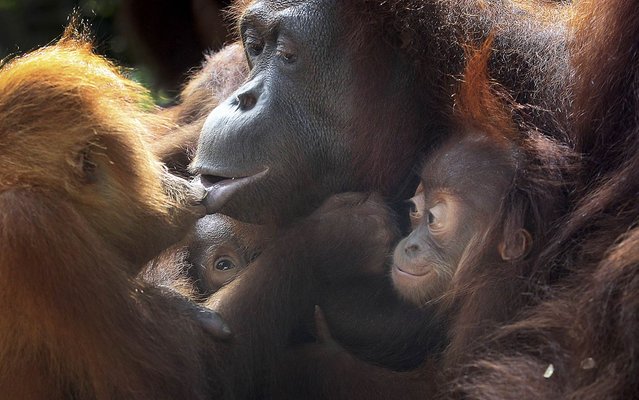 Two under a year old baby Bornean orangutans, second left and right, cling on to their mother while another 3-year-old orangutan kisses her, Thursday, October 3, 2013, at the Singapore Zoo. The Singapore Zoo is renowned for its flagship animal, the orangutan, and exhibits both the endangered Bornean and critically endangered Sumatran sub-species in a social setting. (Photo by Wong Maye-E/AP Photo) 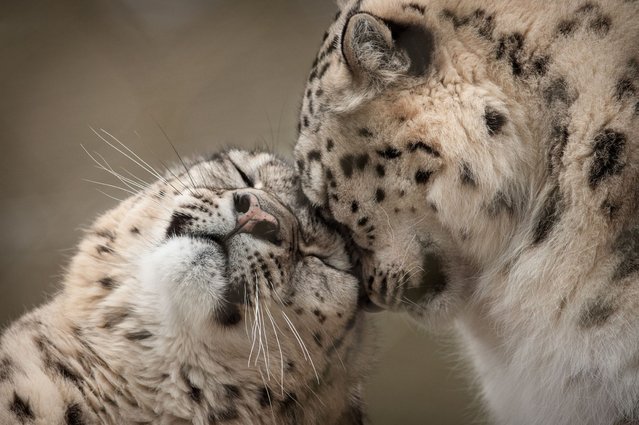 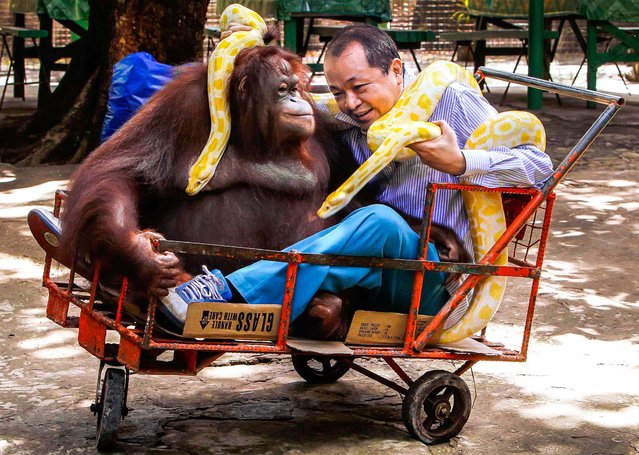 Manny Tangco, owner of Malabon Zoo in Manila, Phillipines, holds a pair of albino Burmese Python as he plays with an orangutan as they celebrate World Animal Day which is tomorrow, on October 3, 2013. (Photo by Romeo Ranoco/Reuters) 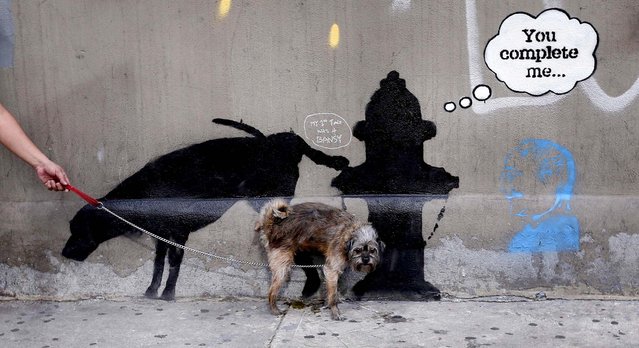 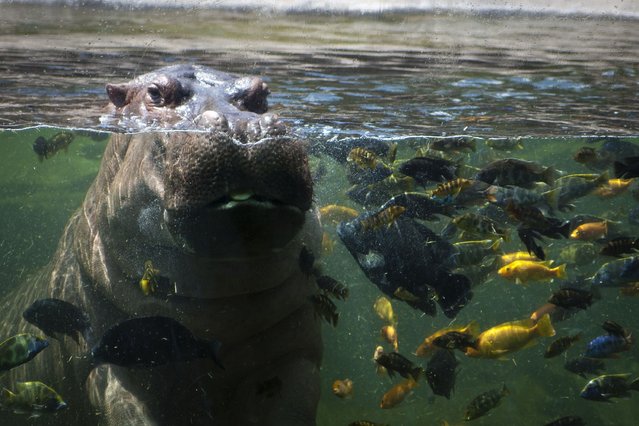