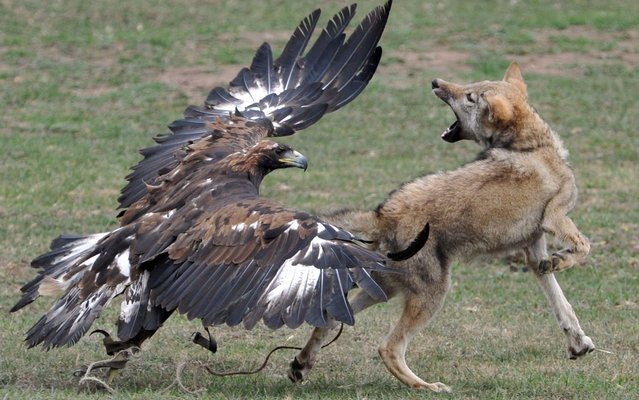 A golden eagle attacks a chained wolf during the first World Nomad Games in the Kyrchin (Semenovskoe) gorge, some 300 km from Bishkek on September 11, 2014. Teams of Azerbaijan, Kazakhstan, Belarus, Mongolia and Tajikistan take part in the games. (Photo by Vyacheslav Oseledko/AFP Photo) 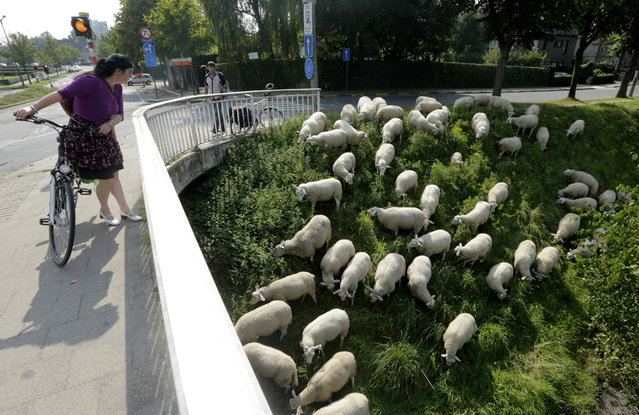 A woman looks at sheep grazing in Ghent, western Belgium, Monday, September 8, 2014. About 60 sheep, belonging to the city of Ghent, graze daily in the city’s parks and along the canal banks as an ecological alternative to lawn mowers. (Photo by Yves Logghe/AP Photo) 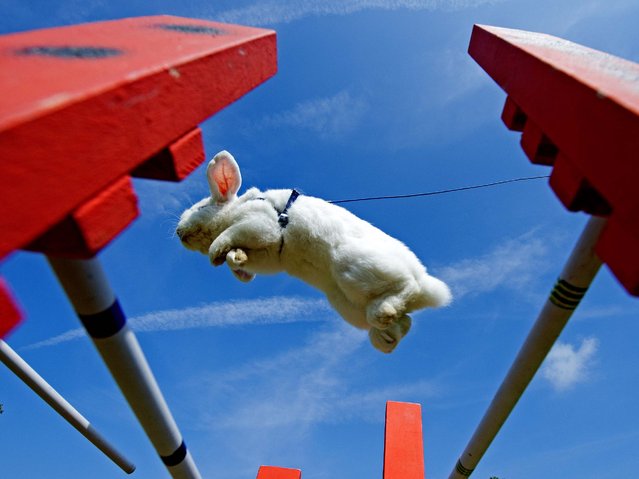 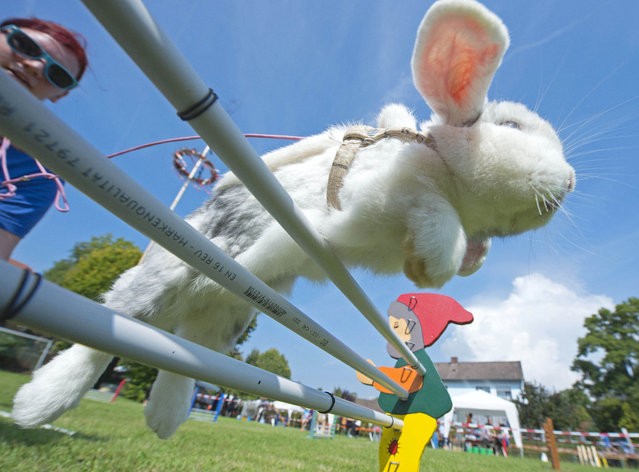 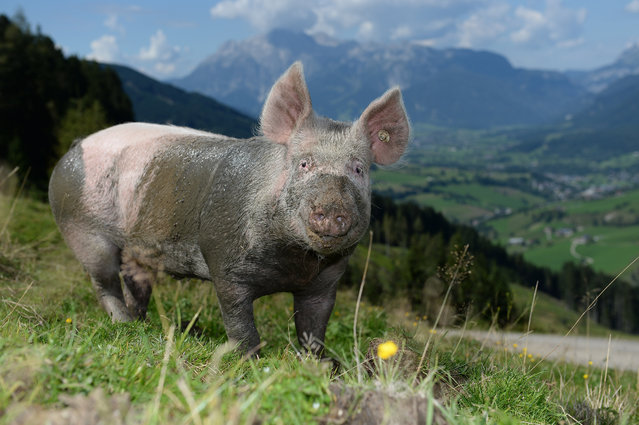 After a mud-bath a pig stands on a green meadow on an alp near Maria Alm, Austrian province of Salzburg, on Monday, September 8, 2014. Weather forecasts predict changeable weather during the next few days. (Photo by Kerstin Joensson/AP Photo) 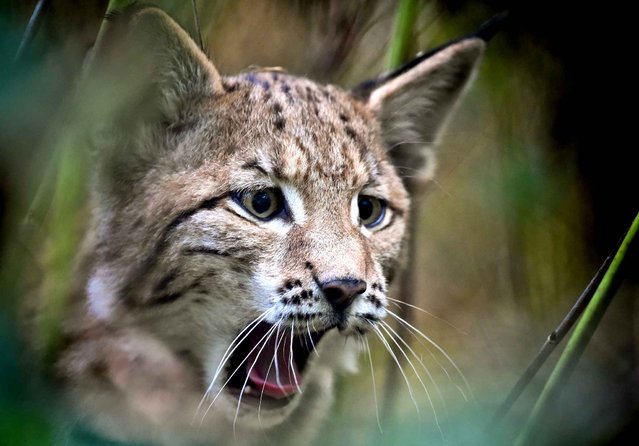 A circa six weeks old lynx is seen at the Schorfheide wild animal park in Gross Schoenebeck, eastern Germany, on September 8, 2014. (Photo by Patrick Pleul/AFP Photo/DPA) 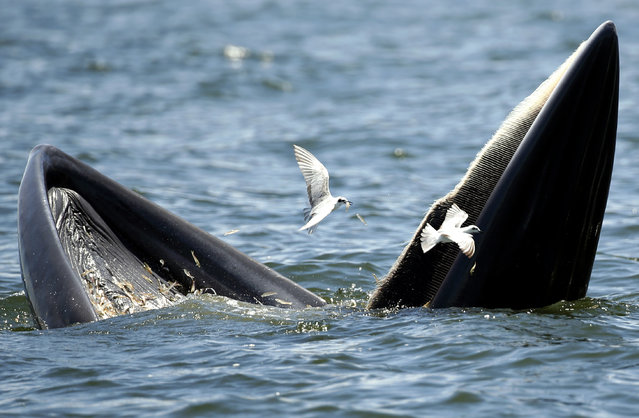 A Bryde's whale and seagulls feast on anchovies in the Gulf of Thailand, September 9, 2014. Bryde's whale are a baleen medium seized whale with dark grey color and a white underbelly and live in tropical to temperate waters. An estimated population of 30 to 35 Bryde's whales are commonly seen along the upper Gulf of Thailand coastlines, between March and October. The Bryde's whale is listed in the Convention on International Trade in Endangered Species of Wild Fauna and Flora (CITES) which prohibits international trade of any parts of the animal. (Photo by Rungroj Yongrit/EPA) 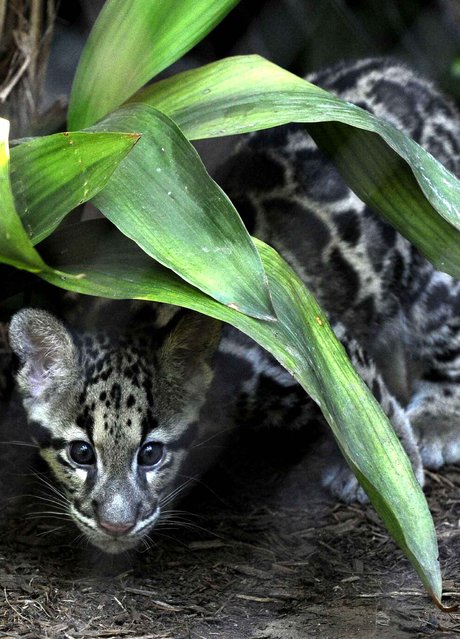 Clouded leopard cub Koshi peeks out from under a plant in his public debut at the Houston Zoo Thursday, September 11, 2014, in Houston. The cub and his brother were born June 6 at the zoo. (Photo by Pat Sullivan/AP Photo) 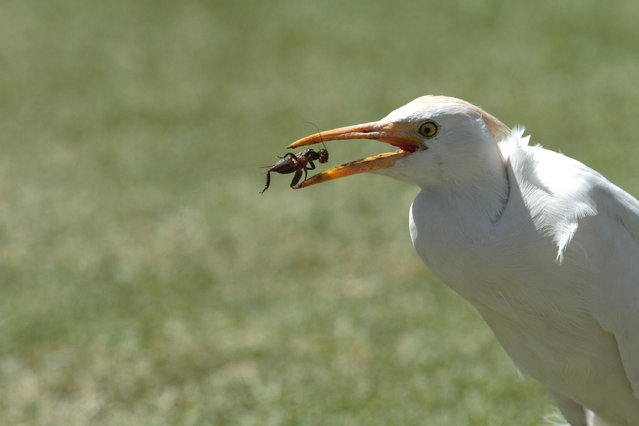 A white stork feasts on a cricket it caught on the pitch, during the cricket One Day International final between South Africa and Australia in Harare, Zimbabwe, Saturday, September 6, 2014. (Photo by Tsvangirayi Mukwazhi/AP Photo) 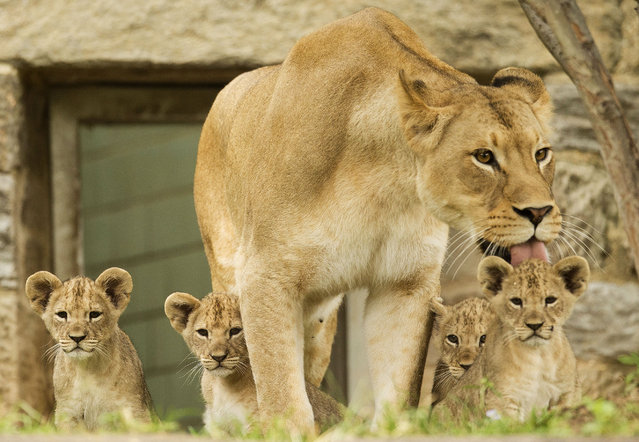 Four-year-old African lion mother Tajiri licks one of her cubs during their debut at the Philadelphia Zoo Friday, September 5, 2014, in Philadelphia. The four cubs were born in late June at the zoo. (Photo by Matt Rourke/AP Photo) 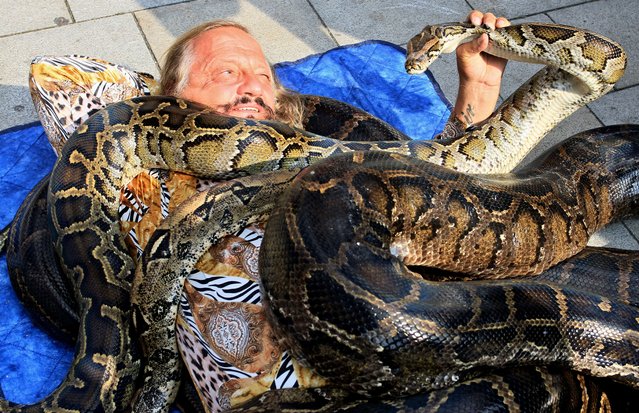 Circus director Jaromir Joo lays under some snakes during a record attempt on September 9, 2014 on St James Square in Brno, Czech Republic. Three boa constrictors and two pythons, each of them having a length of around five meters and weighing together more than 500 kilograms, were laid on Joo, director of the Jo-Joo Circus. (Photo by Radek Mica/AFP Photo) 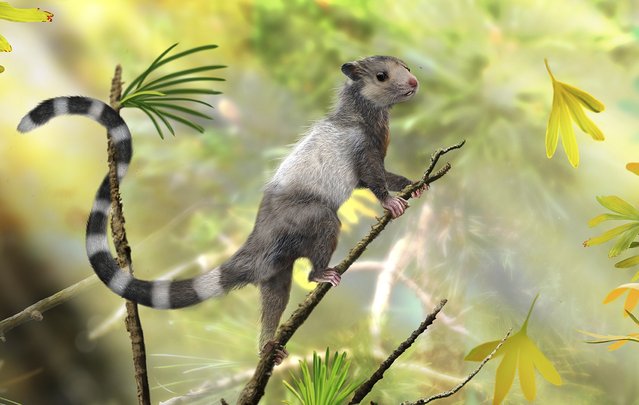 An illustrated reconstruction shows the new mammal species, Xianshou songae, in this American Museum of Natural History image released on September 10, 2014. This mouse-sized animal was a tree dweller in the Jurassic forests and belonged to an extinct group of Mesozoic mammals called Euharamiyida. Scientists announced on Wednesday the discovery in China of fossils belonging to three critters in a find that sheds light on a poorly understood collection of ancient mammals, and indicates that mammals as a group appeared earlier than some experts thought. (Photo by Zhao Chuang/Reuters/American Museum of Natural History) 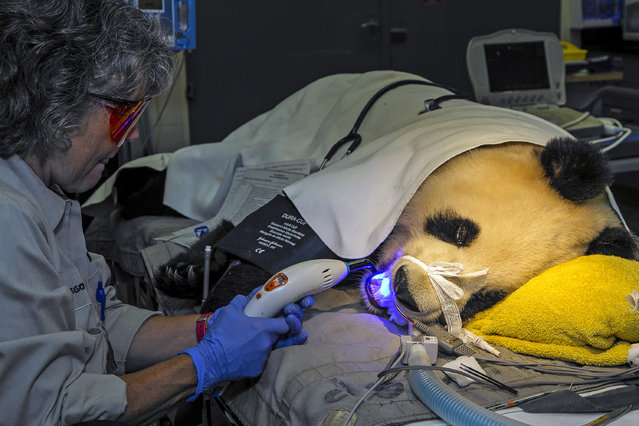 Meg Sutherland Smith, associate director of veterinary services at the San Diego Zoo, uses a light to seal a dental composite during a restorative dental procedure on giant panda Bai Yun at the San Diego Zoo Wednesday, September 10, 2014. The dental procedure was needed after keepers noticed a chip in one of Bai Yun's lower canines. After a dental exam was performed and X-rays taken, the Zoo's veterinary team proceeded to repair the chipped tooth on the anesthetized panda. A dental composite was used to fill in the damaged tooth, which was then cured with a light to seal the filling. (Photo by Ken Bohn/AP Photo/San Diego Zoo) 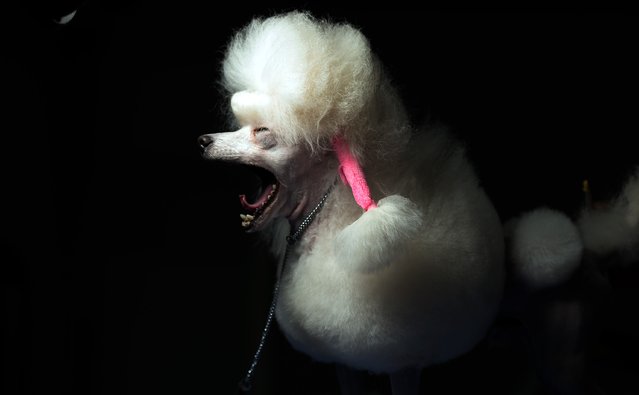 This photo taken on September 7, 2014 in Hangzhou shows a mini poodle yawning before he competes during a dog show. For three days the annual event sees around hundred dogs competing in three categories named: best of breed, best in group and best in show. (Photo by Johannes Eisele/AFP Photo) 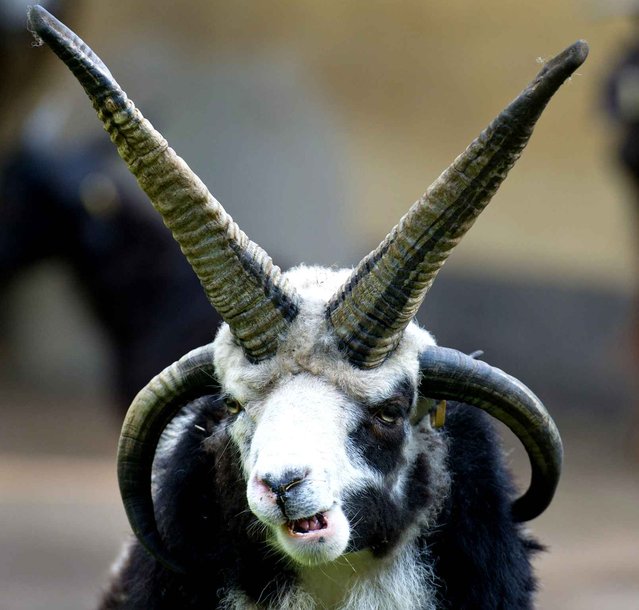 A Jacob sheep stands in its enclosure in the zoo Stralsund, northern Germany, on September 8, 2014. Jacobs may have from two to six horns, but most commonly have four. (Photo by Stefan Sauer/AFP Photo/DPA) 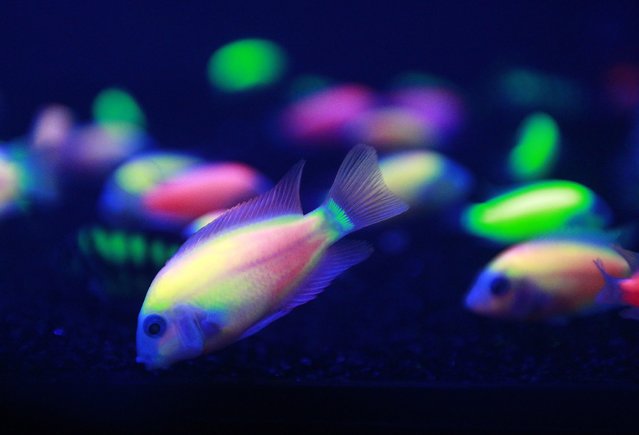 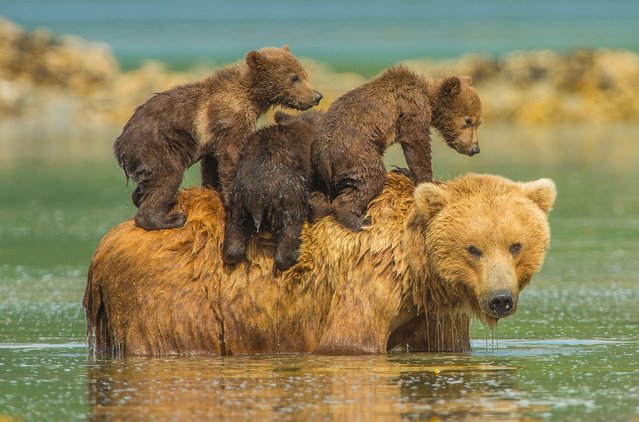 A mother bear takes a dip in the water to cool off in the warm summer sun but refuses to leave her three youngsters behind – so they climb aboard her back. (Photo by Jon Langeland/Solent News & Photo Agency) 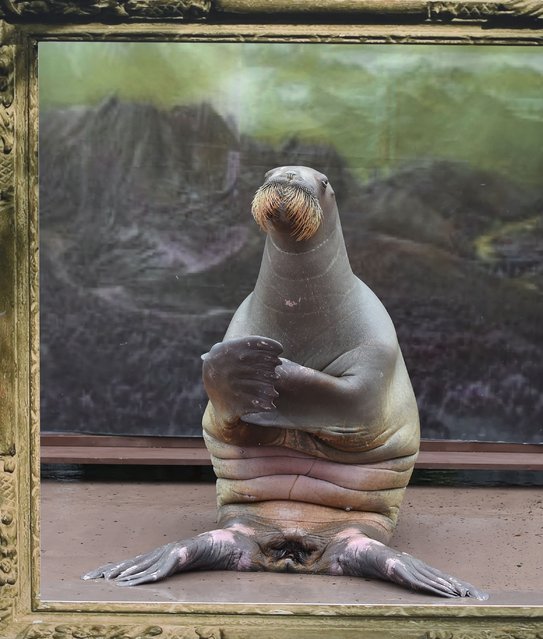 “Pico”, a female-walrus poses as a “Mona Lisa” painting by Leonardo da Vinci during her performance show at the Yokohama Hakkeijima Sea Paradise aquarium in Yokohama on September 7, 2014. The aquarium started the two-month-long autum festival including the walrus performances to attract visitors. (Photo by Toshifumi Kitamura/AFP Photo) 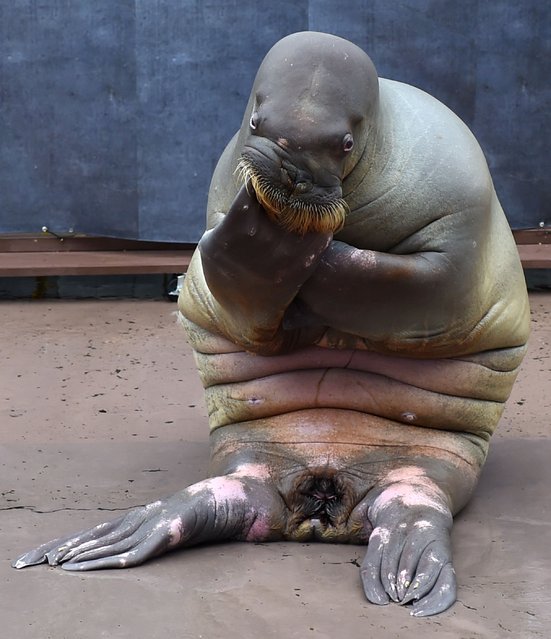 “Pico”, a female-walrus poses as “The Thinker” by Auguste Rodin during her performance show at the Yokohama Hakkeijima Sea Paradise aquarium in Yokohama on September 7, 2014. (Photo by Toshifumi Kitamura/AFP Photo) 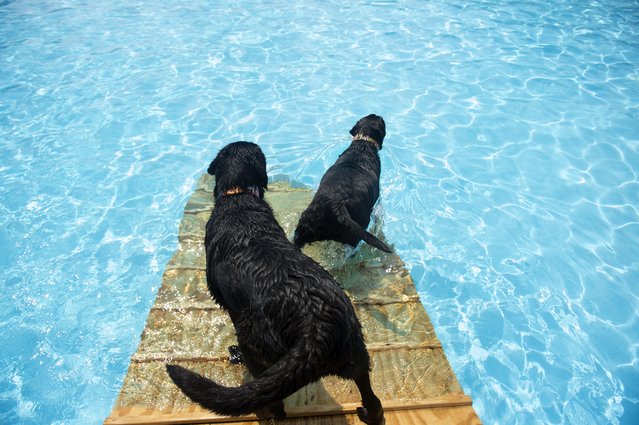 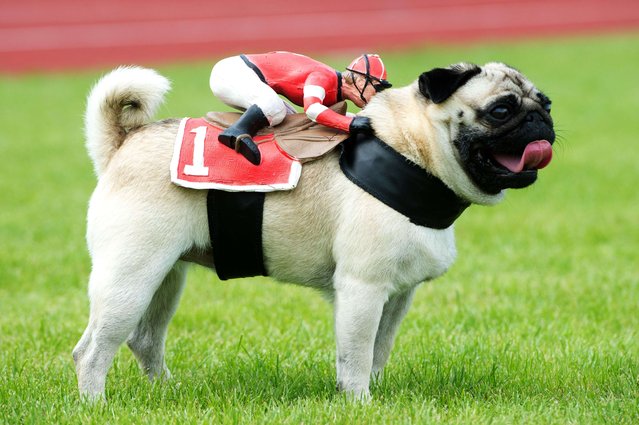 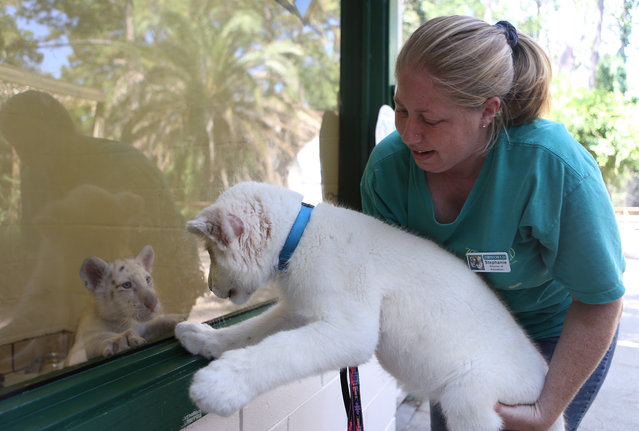