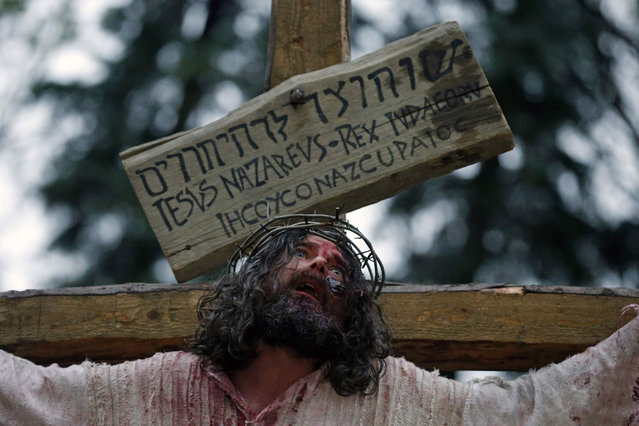 An actor takes part in a re-enactment of the “Via Crucis” (Way of the Cross), which commemorates the crucifixion of Jesus Christ, during the Orthodox Holy Week celebrations in Bucharest April 15, 2014. Romania's Christian Orthodox majority will celebrate Easter on April 20 together with Catholic believers. (Photo by Bogdan Cristel/Reuters) 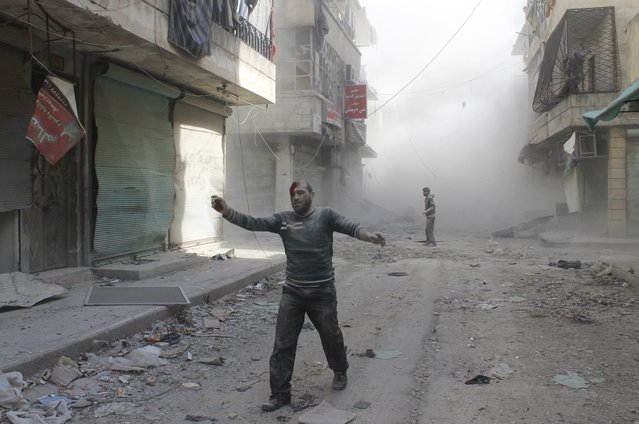 An injured man walks along a street after what activists said was a barrel bomb dropped by forces loyal to Syria's President Bashar al-Assad in Aleppo's al-Myassar neighbourhood April 16, 2014. (Photo by Firas Badawi/Reuters) 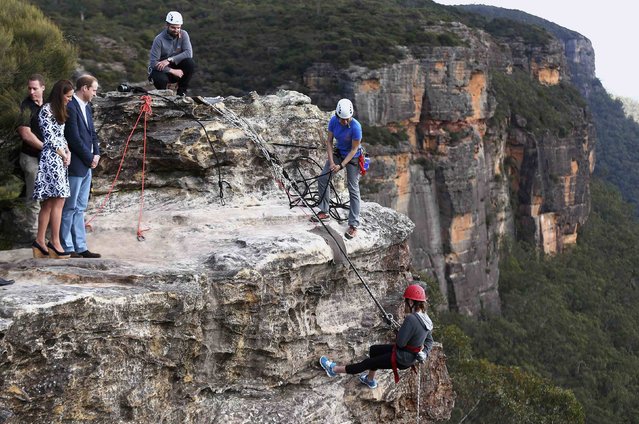 Britain’s Prince William watches rappelling by the Mountain Youth Services group with his wife, Catherine, the Duchess of Cambridge, at Narrow Neck Lookout in the Blue Mountains town of Katoomba, west of Sydney. The royal couple are undertaking a 19-day visit to New Zealand and Australia with their son, George. (Photo by Ryan Pierse/Reuters) 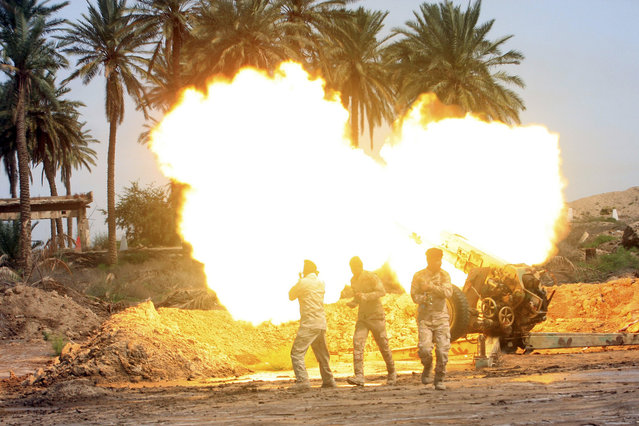 Iraqi security forces fire an artillery gun during clashes with the al Qaeda-linked Islamic State in Iraq and the Levant (ISIL) in Jurf al-Sakhar, 60 km (40 miles) from the capital April 16, 2014. (Photo by Mushtaq Muhammed/Reuters) 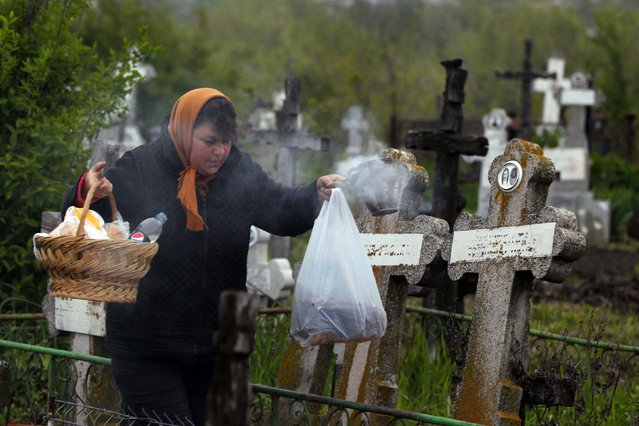 A woman burns incense in front of the graves of her relatives at a cemetery in the village of Copaciu, southwest of Bucharest, early morning April 17, 2014. Orthodox women went to church and cemeteries in the early morning on Maundy Thursday to light candles, burn incense and mourn their dead relatives as part of a southern Romanian tradition. Maundy Thursday, or Holy Thursday, is the day Christians commemorate the Last Supper of Jesus Christ. Romania's Christian Orthodox majority will celebrate Easter on April 20 together with Catholic believers. (Photo by Bogdan Cristel/Reuters) 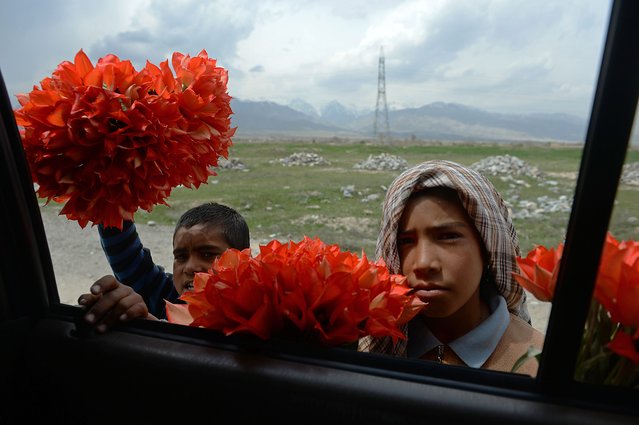 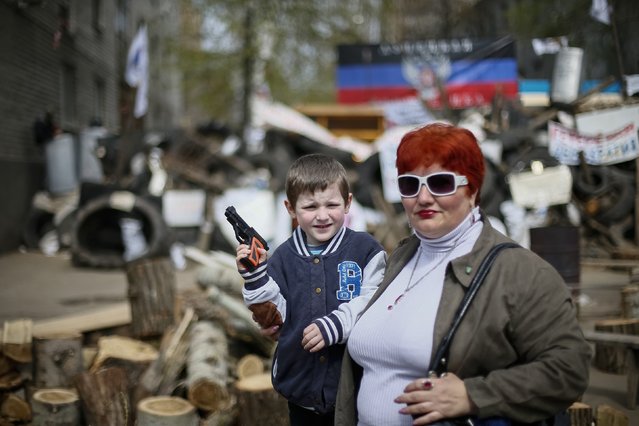 A boy with toy gun poses for picture in front of barricades at the police headquarters in the eastern Ukrainian town of Slaviansk, April 17, 2014. Russian President Vladimir Putin said on Thursday that Ukraine's government needs to provide guarantees to its Russian-speaking population in the east of the country to resolve the crisis. (Photo by Gleb Garanich/Reuters) 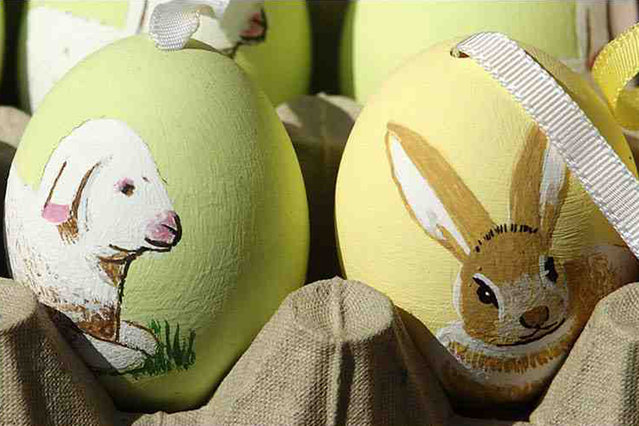 A combination of photographs shows handmade Easter eggs at an Easter market in Vienna, April 17, 2014. (Photo by Heinz-Peter Bader/Reuters) 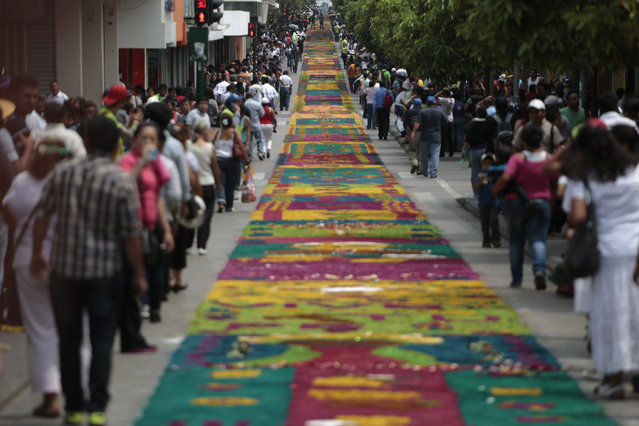 People walk next to a traditional Guatemalan traditional sawdust carpet during Holy Week celebrations, in downtown Guatemala City April 17, 2014. According to local media, the carpet was recognized as the Guinness world record for the longest sawdust carpet at 2,012 meters. The carpet is made of colored sawdust and has sacred symbols. (Photo by Jorge Dan Lopez/Reuters) 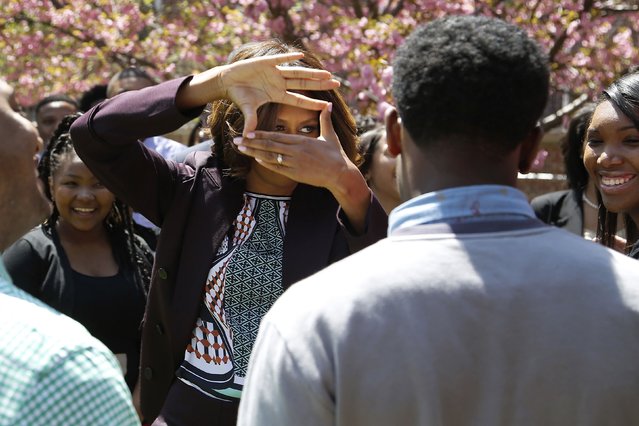 U.S. first lady Michelle Obama obliges cheering students by showing off the hand signal the students in the quadrangle dormitory use to identify themselves, during a campus tour of Howard University with high school students in Washington April 17, 2014. Obama joined the juniors and seniors from Chicago public high schools on the first day of a four-day visit to Howard University called Escape to the Mecca. (Photo by Jonathan Ernst/Reuters) 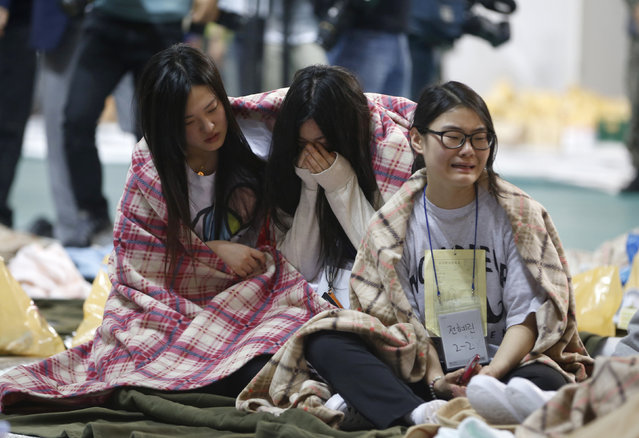 Rescued passengers cry at a gym where rescued passengers gather in Jindo April 16, 2014. More than 300 people were missing after a ferry sank off South Korea, the coastguard said on Wednesday, with a three-fold increase in the number of passengers unaccounted for put down to a miscalculation by officials. The ferry Sewol was carrying 477 people, of whom 164 were confirmed rescued, coastguard officials said. Two people were confirmed dead after the ferry listed heavily onto its side and capsized in apparently calm conditions off South Korea's southwest coast. (Photo by Kim Hong-Ji/Reuters) 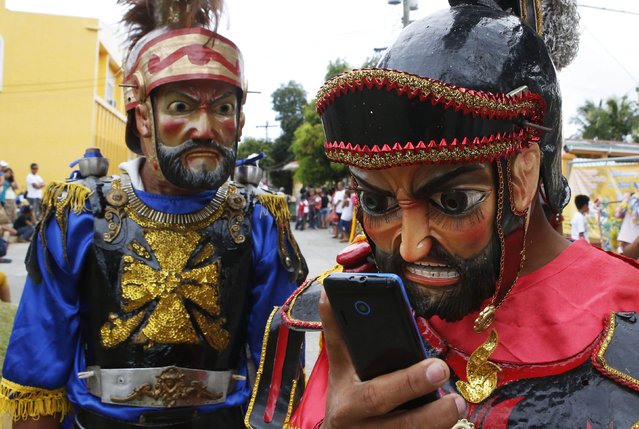 A penitent called “Morion” checks his mobile phone in Mogpog town on Marinduque island in central Philippines April 14, 2014. During the annual festival, masked and costumed penitents called “Moriones” dress in attire that is the local interpretation of what Roman soldiers wore during biblical times. Holy Week is celebrated in many Christian traditions during the week before Easter. (Photo by Erik De Castro/Reuters) 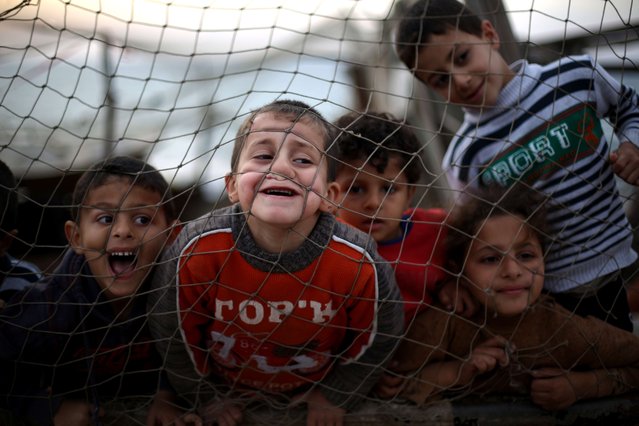 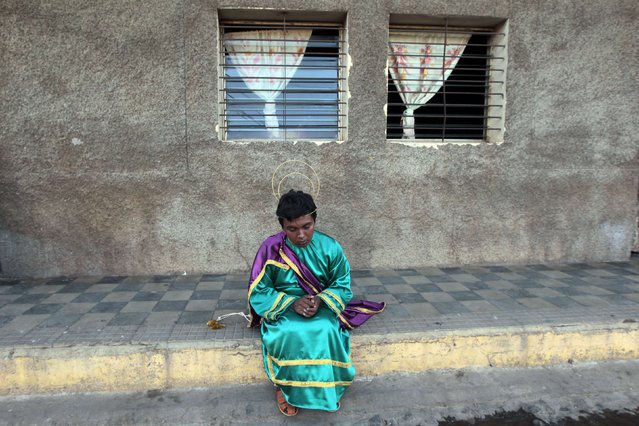 An actor taking part in a re-enactment of the crucifixion of Jesus Christ takes a break during Holy Week in Masaya, April 17, 2014. Holy Week is celebrated in many Christian traditions during the week before Easter. (Photo by Oswaldo Rivas/Reuters) 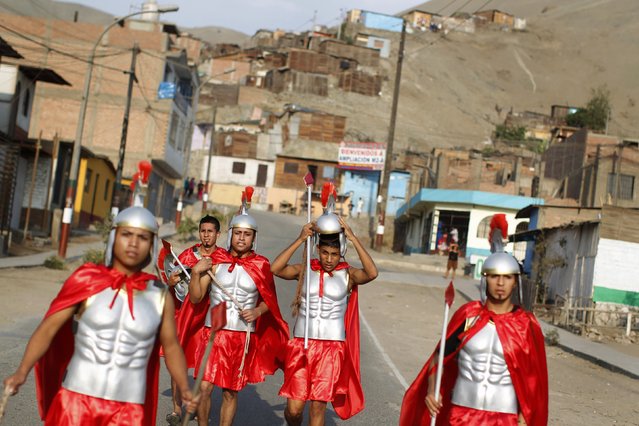 Actors prepare to take part in a re-enactment of the crucifixion of Jesus Christ during Holy Week at Mi Peru, a shanty town on the outskirts of Lima April 17, 2014. Holy Week is celebrated in many Christian traditions during the week before Easter. (Photo by Enrique Castro-Mendivil/Reuters) 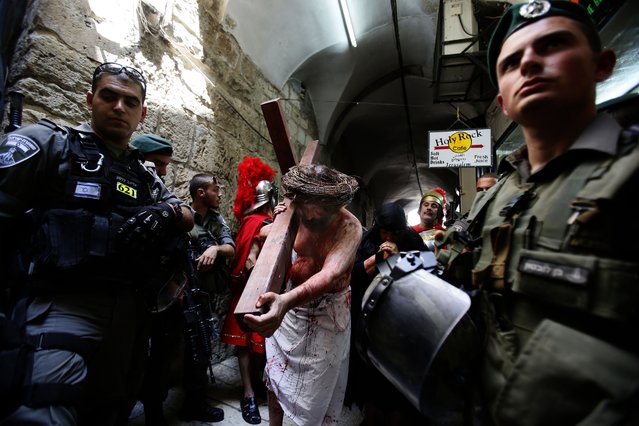 Israeli security force stand guard as Christian pilgrim reenacts the Passion of Christ along the Via Dolorosa (Way of Suffering) during a procession marking Good Friday on April 18, 2014 in Jerusalem's old city. Thousands of Christian pilgrims take part in processions along the route where, according to tradition, Jesus Christ carried the cross during his last days, as Christians around the world mark the Holy Week, commemorating the crucifixion of Jesus Christ, leading up to his resurrection on Easter. (Photo by Gali Tibbon/AFP Photo) 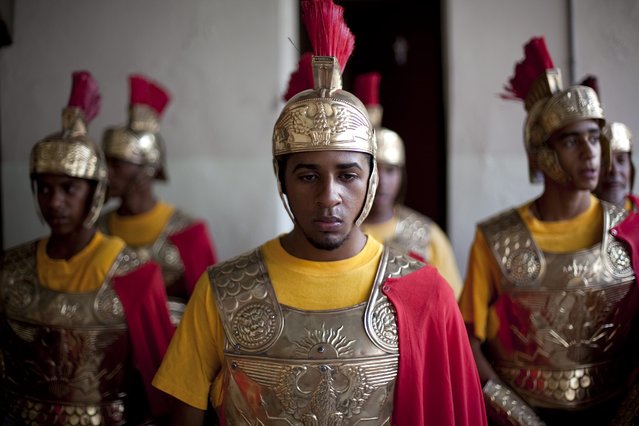 A group of men dressed as Roman soldiers participate in the celebrations of Palm Sunday in Santo Domingo, Dominican Republic, 13 April 2014. The Palm Sunday is marked by Roman Catholic devotees all over the world and starts the Christian Holy Week. (Photo by Orlando Barria/EPA) 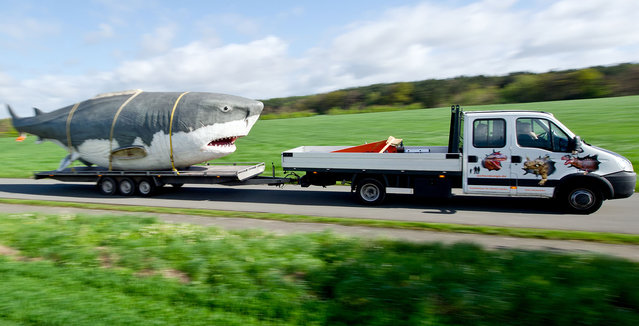 A van transports a life-sIze reconstruction of a Megalodon, an extinct species of shark, to a dinosaur park in Muenchehagen, central Germany on April 14, 2014. The reconstructed Megalodon model measures 14 m long and weighs about 1,0 ton. (Photo by Christoph Schmidt/AFP Photo/DPA) 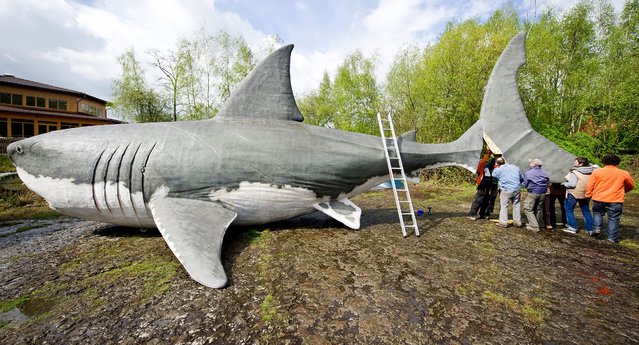 Helpers carry the tailfin to attach it to a life-size reconstruction of a “Megalodon”, a prehistoric giant shark, in the Dinosaur Park in Muenchehagen, Germany, 14 April 2014. With a length of 15 to 20 meters the “Megalodon” is suggested to look like the “big brother” of the great white shark. (Photo by Christoph Schmidt/EPA) 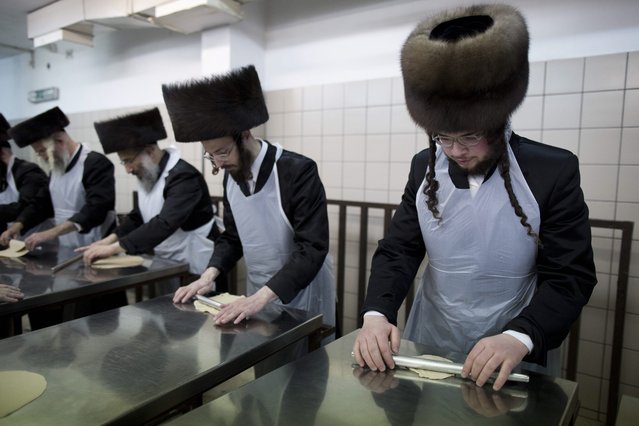 Ultra-Orthodox Jews knead dough in a matzah bakery in the Belz Hasidic dynasty in Jerusalem, Israel, 14 April 2014, as part of the preparation for the high holiday of Passover at sunset this evening. Religious Jewish families as well store and restaurant owners removed all traces of “chametz” (unleavened food) prior to the Passover feast, which commemorates the Israelites' exodus from ancient Egypt. (Photo by Abir Sultan/EPA) 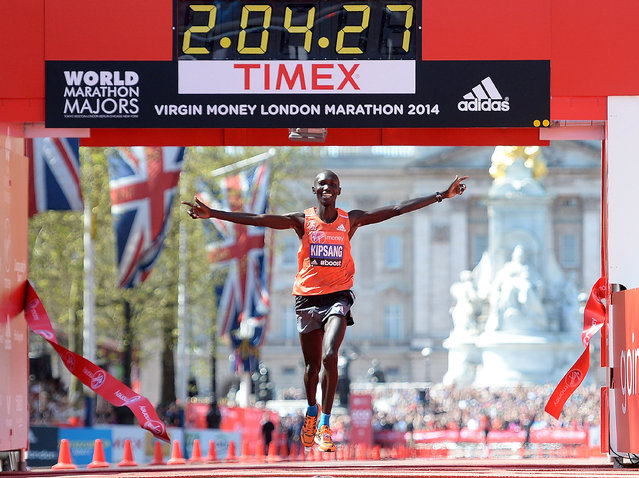 Wilson Kipsang of Kenya crosses the finish line to win the men's elite race at the Virgin London Marathon on April 13, 2014 in London, England. (Photo by Tom Dulat/Getty Images) 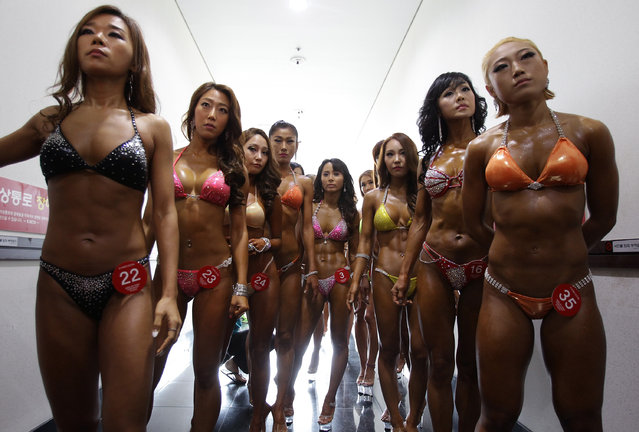 Female bodybuilders prepare themselves for judging backstage during the 2014 NABBA/WFF Korea Championship on April 13, 2014 in Daegu, South Korea. (Photo by Chung Sung-Jun/Getty Images) 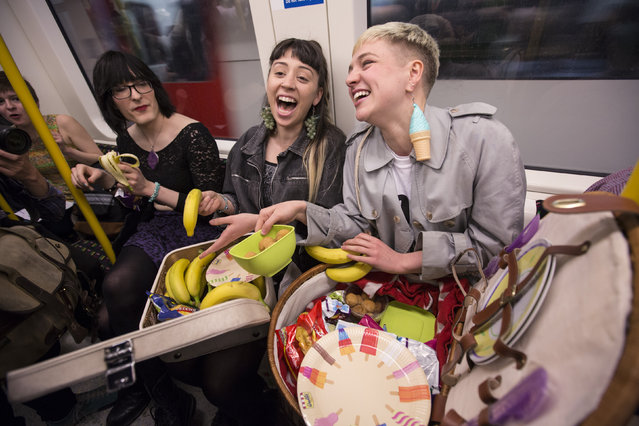 Women eat on a Circle Line Underground train in protest at the “Women who eat on tubes” website on April 14, 2014 in London, England. The “Women who eat on tubes” blog invites members of the public to upload images of women eating on the London Underground and has received thousands of followers plus numerous accusations of misogyny. (Photo by Oli Scarff/Getty Images) 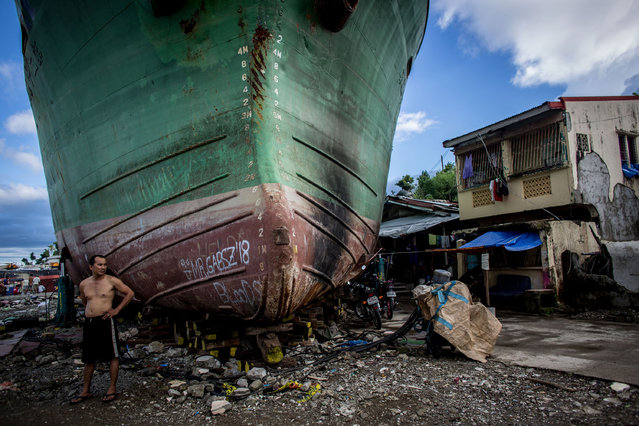 A man stands in front of a large ship grounded by Typhoon Haiyan on April 18, 2014 in Tacloban, Leyte, Philippines. People continue to rebuild their lives five months after Typhoon Haiyan struck the coast on November 8, 2013, leaving more than 6000 dead and many more homeless. Although many businesses and services are functioning, electricity and housing continue to be the main issues, with many residents still living in temporary housing conditions due to “No Build” areas preventing them from rebuilding their homes. This week marks Holy Week across the Philippines and will see many people attending religious activities. (Photo by Chris McGrath/Getty Images) 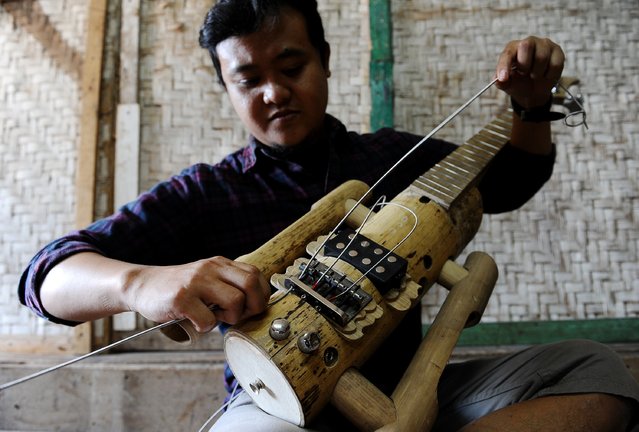 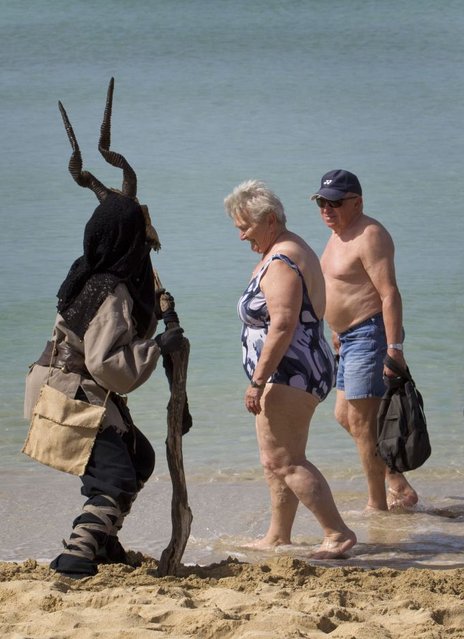 Tourists walk past a protestor dressed as a devil perfoming as he protests against oil exploration off the coast of the Balearic Islands, at Playa de Palma in Palma de Mallorca on April 12, 2014. Campaigners warned on March 2014 of environmental threats from new oil-prospecting projects off Spain's Balearic and Canary Islands, two major tourist destinations. Campaign group Ecologists in Action said in a report that 10 oil installations were operating off Spanish coasts and new oil-prospecting licences had been granted for the islands that draw millions of tourists every year. The group said the proposed prospection and certain oil installations already in place off Spain's coasts posed a “constant risk of pollution” and threatened sea species and fishing. (Photo by Jaime Reina/AFP Photo) 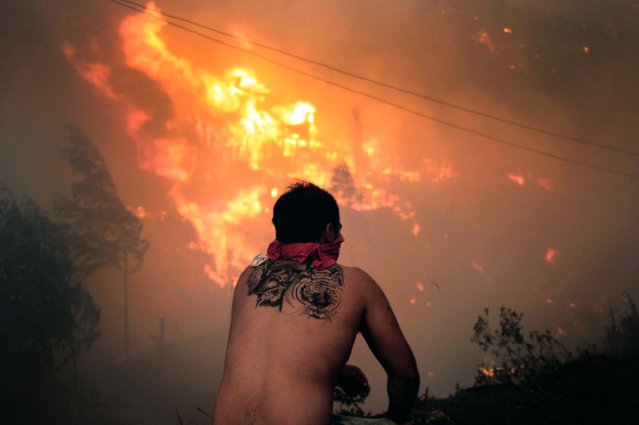 A local stares at houses in flames during a fire in Valparaiso, 110 km west of Santiago, Chile, on April 12, 2014. Authorities decreed a red alert for the area after the fire consumed more than 100 houses. (Photo by Felipe Gamboa/AFP Photo) 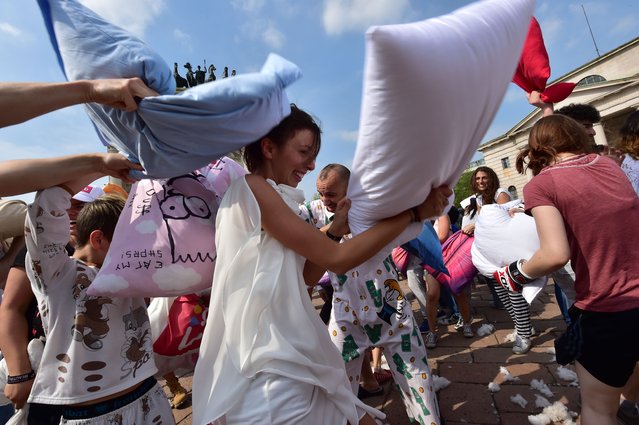 People take part in a “pillow fight” at the Arco della Pace on April 12, 2014 in Milan. (Photo by Giuseppe Cacace/AFP Photo) 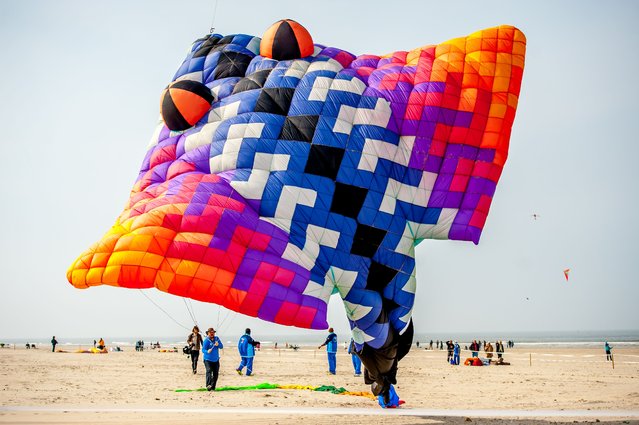