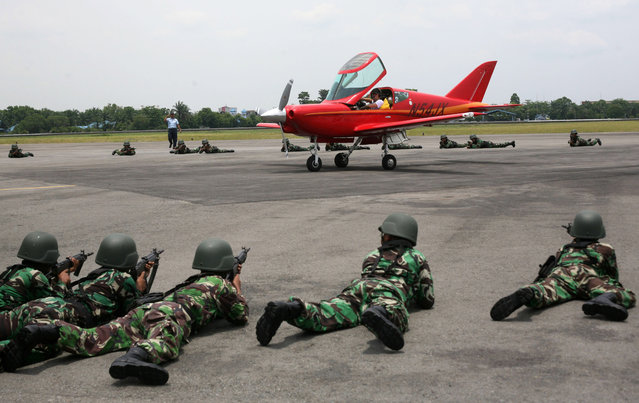 Indonesian soldiers train their weapons at an airplane piloted by 65 year-old Heinz Peier of Switzerland after it was intercepted by Indonesian jet fighters and forced to land at Soewondo Air Base in Medan, North Sumatra, Indonesia, Thursday, April 10, 2014. Peier was on a ferry flight from Colombo to Singapore when he entered Indonesian airspace illegally, an Air Force official said. (Photo by Binsar Bakkara/AP Photo) 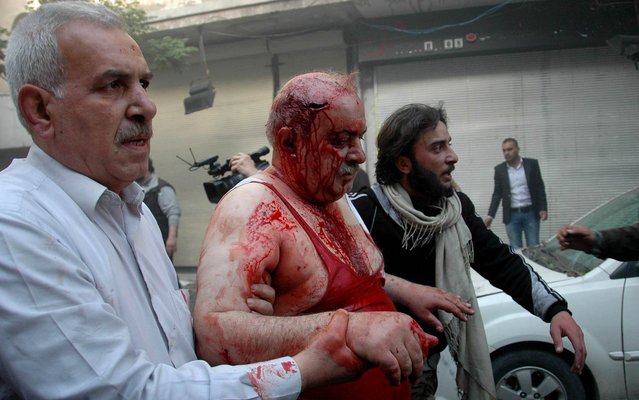 Syrians help a wounded man following a car bomb explosion in al-Khudary Street in the Karm al-Loz neighbourhood of the central Syrian city of Homs on April 9, 2014. More than 150,000 people have been killed in Syria since the conflict began in March 2011, a monitoring group said in a new toll released. (Photo by AFP Photo/STR) 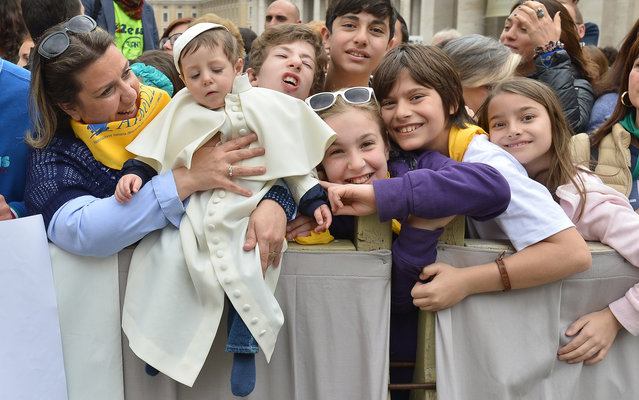 A mother holds her baby dressed as a pope as they wait Pope Francis upon his arrival on St. Peter's square at the Vatican to lead his weekly general audience on April 9, 2014. (Photo by Alberto Pizzoli/AFP Photo) 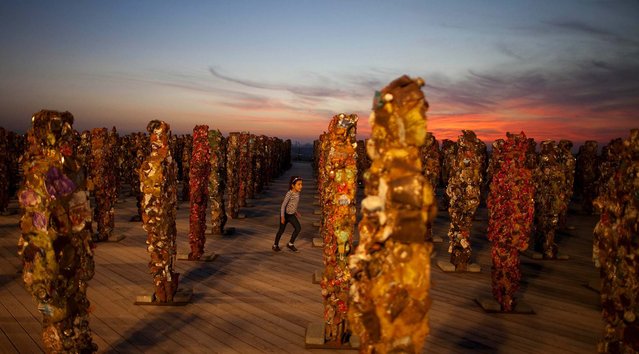 A girl plays at the “Trash People” exhibition by German conceptual artist HA Schult in Ariel Sharon Park, a former waste site outside Tel Aviv, on April 6, 2014. The “Trash People” exhib features life-size figures made from 20 tons of recycled iron, glass, computer parts, cans and industrial waste. The exhibition has been traveling for 18 years around the world, with stops in Paris' La Defense, Moscow's Red Square, the Great Wall of China, Egypt's pyramids in Giza, the Piazza del Popolo in Rome, Antarctica and now Israel. (Photo by Lior Mizrahi/Getty Images) 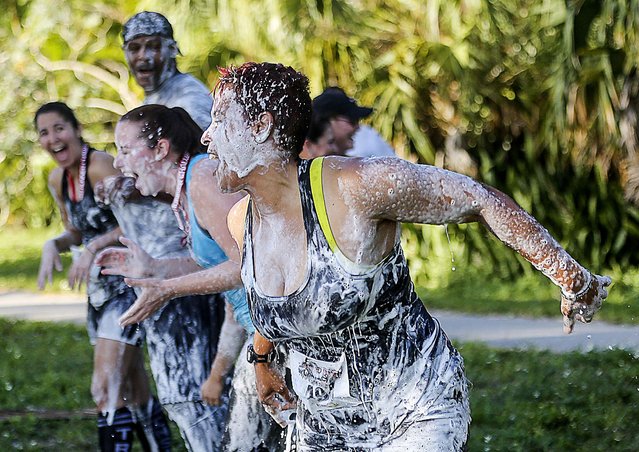 Participants race after sliding down the soapy slip-and-slide in the Rugged Runner Challenge in West Palm Beach, on April 6, 2014. (Photo by Damon Higgins/The Palm Beach Post) 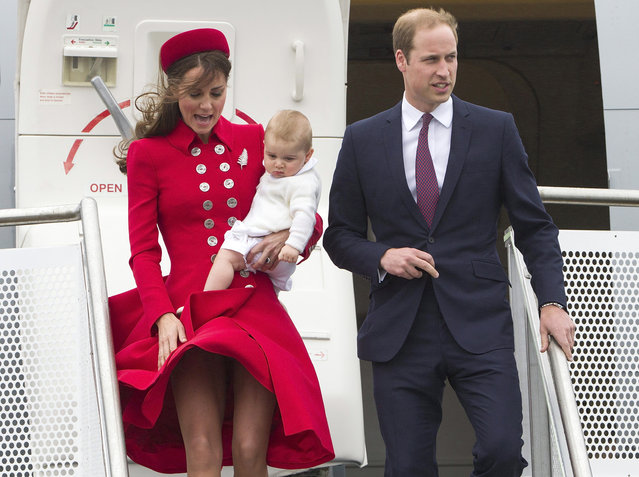 Britain's Prince William and his wife Kate, the Duchess of Cambridge with Prince George arrive for their visit to New Zealand at the International Airport, in Wellington, New Zealand, Monday, April 7, 2014. (Photo by David Rowland/AP Photo/SNPA) 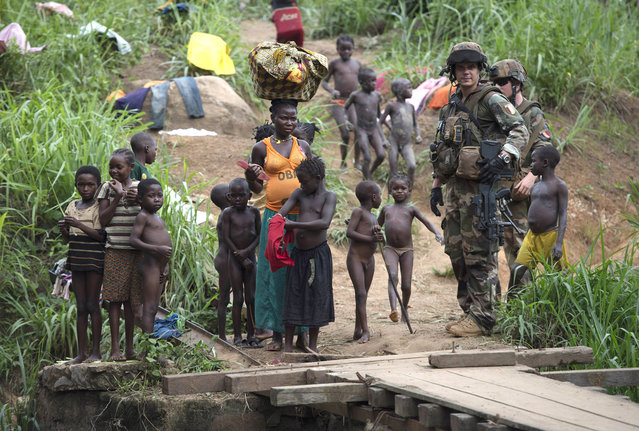 French soldiers of the 13th Alpine Hunters Battalion (13th BCA) stand beside children as they patrol near the northwestern city of Boda on April 7, 2014. Thousands of people have been killed in a wave of sectarian violence across the Central African Republic that has lasted for more than a year, despite the presence of African Union and French peacekeeping troops. (Photo by Miguel Medina/AFP Photo) 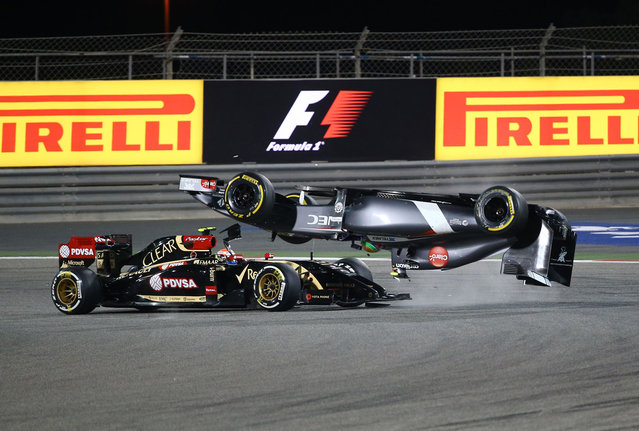 Sauber driver Esteban Gutierrez of Mexico crashes ahead of Lotus driver Pastor Maldonado of Venezuela during the Formula One Bahrain Grand Prix at Sakhir circuit in Manama on April 6, 2014. (Photo by Marwan Naamani/AFP Photo) 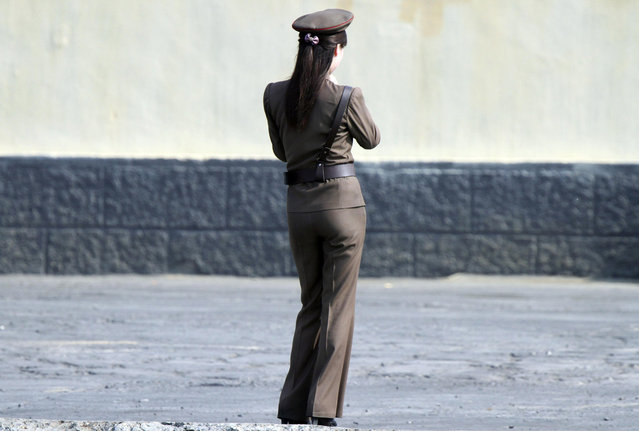 A soldier stands along the bank of Yalu River, near the North Korean town of Sinuiju, opposite the Chinese border city of Dandong, April 7, 2014. (Photo by Jacky Chen/Reuters) 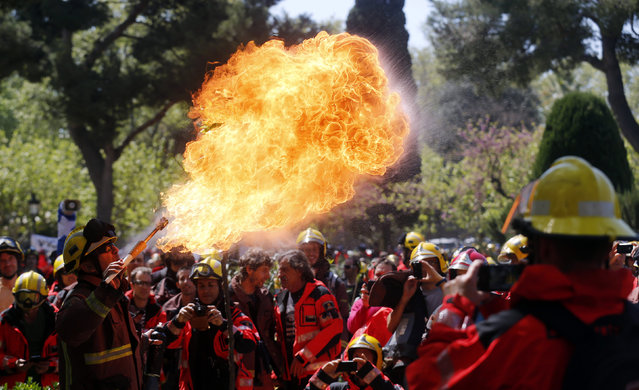 A fireman performs with fire during a protest against budget cuts in front of Catalunya's Parliament in Barcelona, April 10, 2014. (Photo by Albert Gea/Reuters) 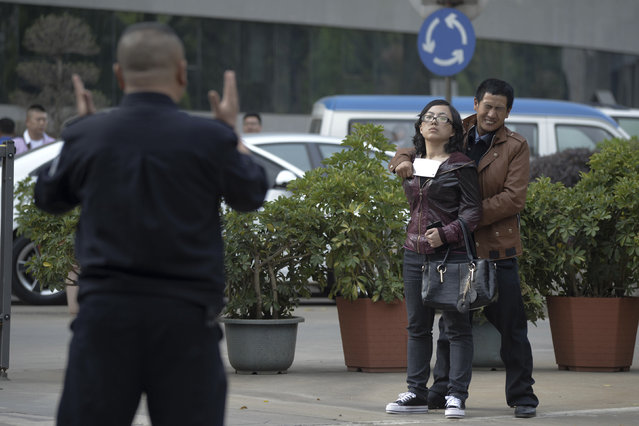 A police officer speaks to a man holding a woman hostage with a cleaver on a street in Kunming, Yunnan province April 8, 2014. Police successfully rescued the hostage and detained the man after a one-hour standoff. The reason of the crime remains unclear, local media reported. (Photo by Reuters) 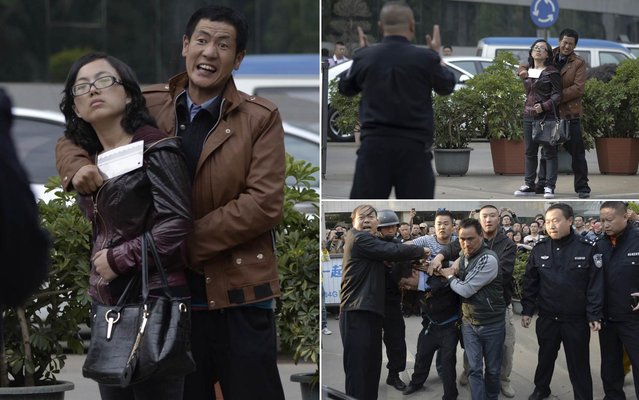 Chinese police officers arrest a cleaver-wielding man, who took a woman hostage, in front of the Kunming News Center in Kunming city, southwest Chinas Yunnan province, 8 April 2014. A woman taken hostage by a cleaver-wielding man was rescued unharmed by police at the Kunming News Center in southwest Chinas Yunnan Province on Tuesday (8 April 2014). The man took a woman hostage with a cleaver at 17:00 pm. Police cordoned off the area and tried to negotiate with him. After failing to persuade the man to surrender, police acted and captured the man. The woman hostage fainted due to fright after being rescued and was rushed to the hospital immediately. An officer suffered injuries to his right hand. The case is still being investigated. (Photo by Reuters) 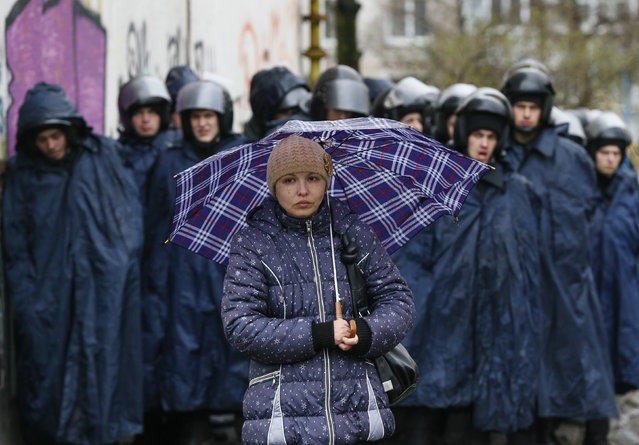 A supporter of the detained pro-Russian protesters waits in front of the court building in Kharkiv, April 10, 2014. Ukraine will not prosecute pro-Russian separatists who seized government buildings if they surrender their weapons and disperse, the country's president said on Thursday, in a bid to ease a crisis that stoked fears of the country's break-up. (Photo by Gleb Garanich/Reuters) 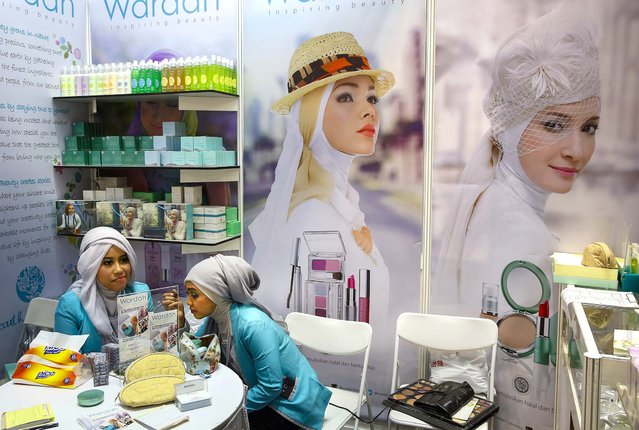 A vendor touches up her make-up while waiting for customers during the Malaysia International Halal Showcase in Kuala Lumpur, on April 9, 2014. (Photo by Vincent Thian/Associated Press) 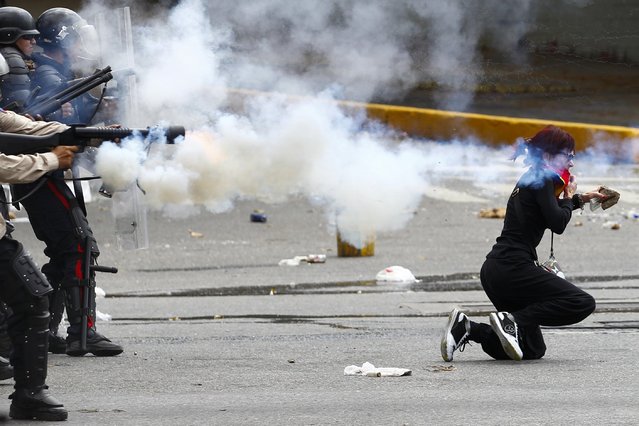 Venezuela's national police fire tear gas as an anti-government protester kneels holding a rock during riots in Caracas April 6, 2014. Protesters have been on the streets since early February calling for President Nicolas Maduro's resignation and complaining about a litany of problems from rampant crime to food shortages.The government says they are seeking a coup against Maduro. (Photo by Carlos Garcia Rawlins/Reuters) 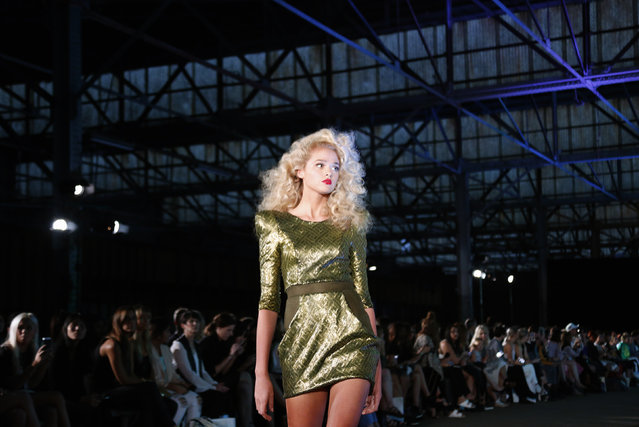 A model presents a creation by Australian fashion label “Zhivago” during a show held in an old train shed at Australian Fashion Week in Sydney April 10, 2014. The five-day fashion event showcases designs by local and international fashion labels. (Photo by David Gray/Reuters) 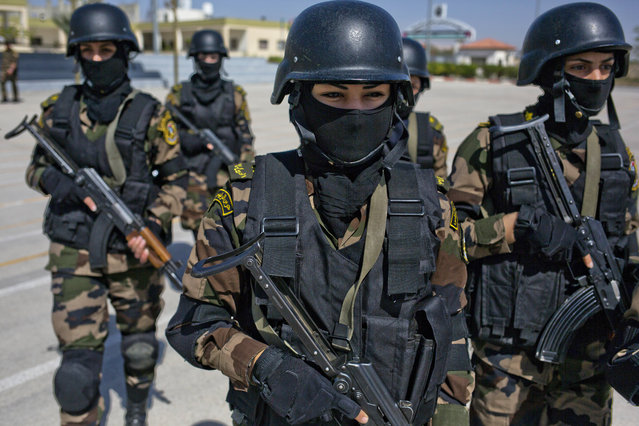 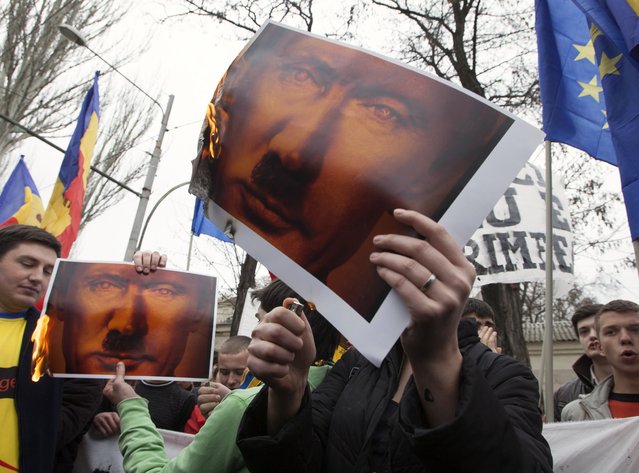 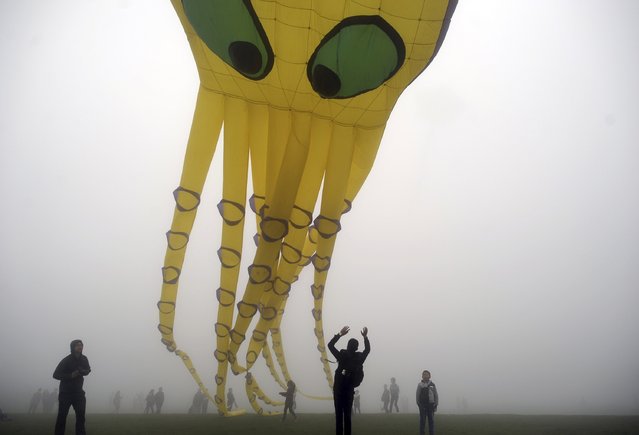 An octopus-shaped kite flies over visitors on a smoggy day during a kite festival in Chongqing, China, on April 6, 2014. (Photo by China Daily via Reuters) 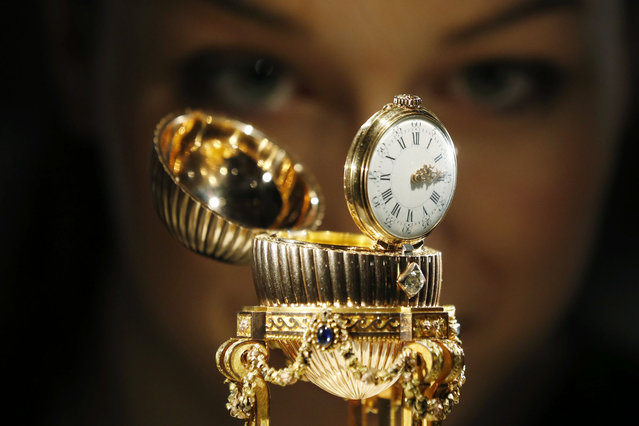 An assistant poses for a photograph with a Faberge egg during a photo-call at antique dealer Wartski, in central London April 7, 2014. The $20 million egg, hailing from the court of imperial Russia, was bought in a U.S. junk market by a scrap metal dealer, before it was acquired by Wartski for an unidentified private collector. It will be on display at Wartski's in London for four days in April. (Photo by Olivia Harris/Reuters) 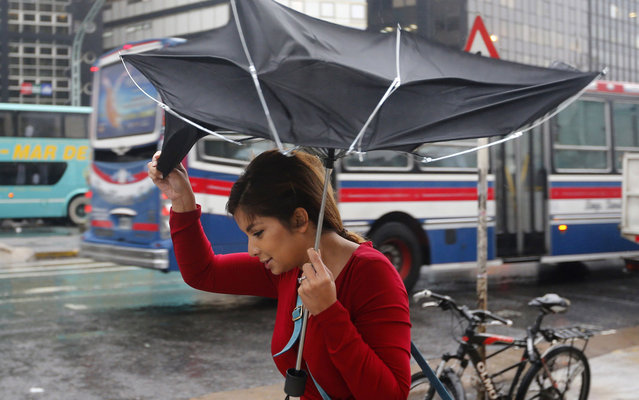 A woman struggles to control her umbrella from the wind during a rainfall in Buenos Aires April 7, 2014. (Photo by Enrique Marcarian/Reuters) 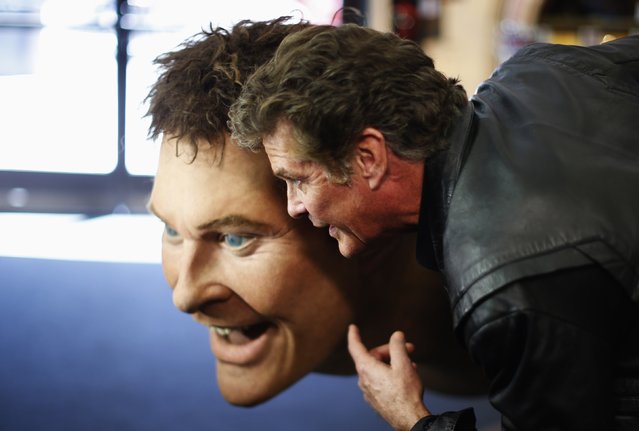 Actor David Hasselhoff poses with a replica of himself built for the “The SpongeBob SquarePants Movie”, during an auction in Beverly Hills, California April 7, 2014. (Photo by Lucy Nicholson/Reuters) 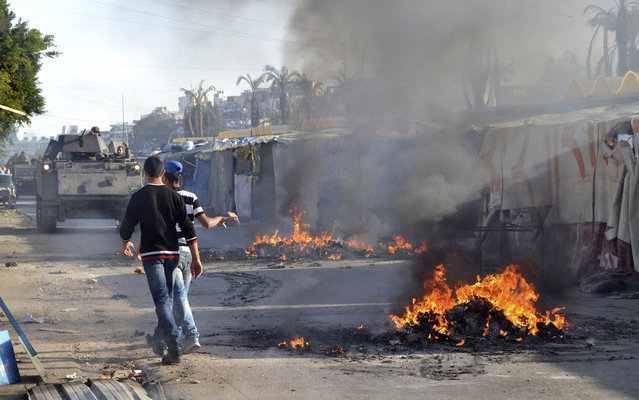 Sunni Muslim protesters set fire, blocking a road in the northern city of Tripoli, to protest against the Lebanese army's ongoing raids that are part of their security plan for the city in a push to control sectarian violence fuelled by the war in Syria April 8, 2014. (Photo by Reuters/Stringer) 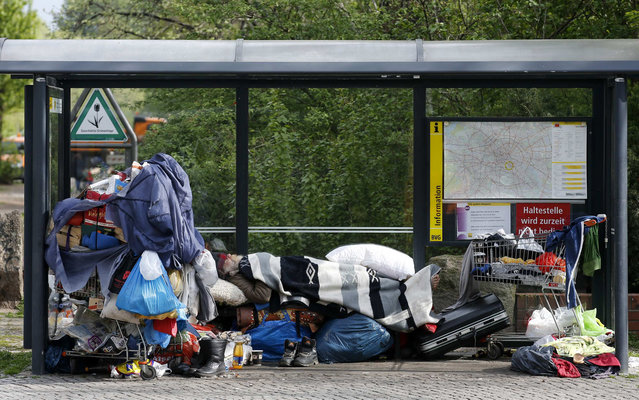 A homeless man sleeps amongst his possessions inside a bus stop at Berlin's Kreuzberg district, April 8, 2014. (Photo by Fabrizio Bensch/Reuters) 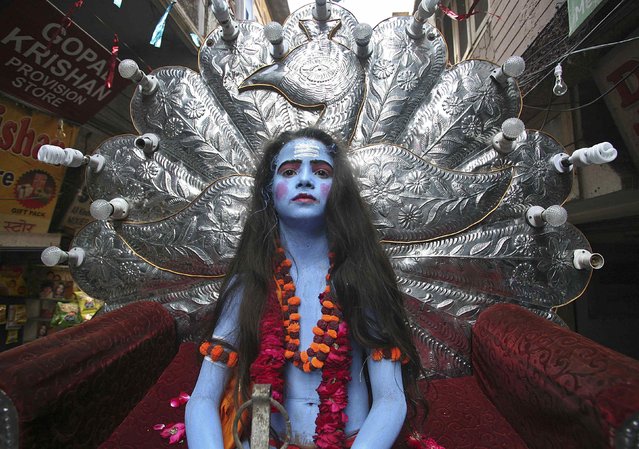 A boy takes part in a religious procession on the occasion of Ramnavmi festival in the northern Indian city of Amritsar April 8, 2014. The festival commemorates the birth of Hindu god Rama. (Photo by Munish Sharma/Reuters) 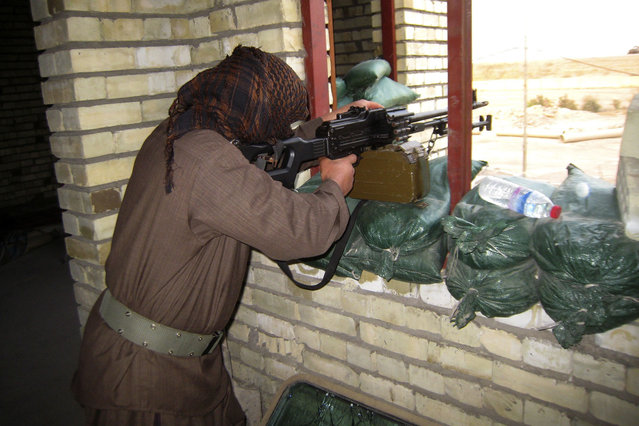 A masked Sunni Muslim gunman takes position with his weapon in the city of Falluja April 8, 2014. Government forces are fighting rebellious Sunni tribes and an al-Qaeda splinter group, the Islamic State of Iraq and the Levant (ISIL), in western Anbar province. (Photo by Reuters/Stringer) 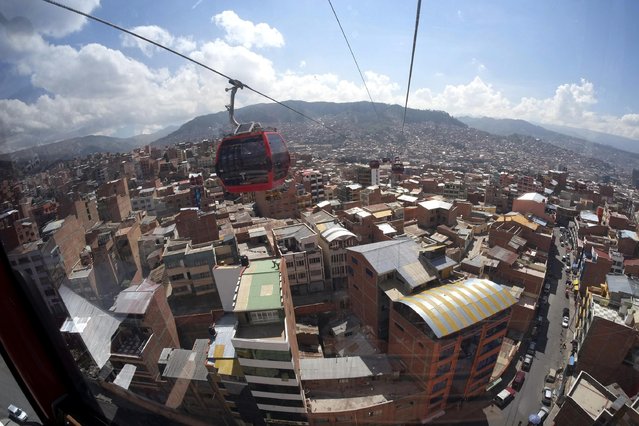 Cable cars are seen over La Paz April 8, 2014. Austria's Doppelmayr Garaventa Group held a media preview on Tuesday for the first of three urban ropeways in the Bolivian capital of La Paz. The first ropeway links the cities of La Paz and El Alto. The three ropeways will have an overall length of almost 11 km (6.835 miles) and a total of 11 stations, forming the world's largest network of urban ropeways and easing the traffic on congested roads, according to Doppelmayr. (Photo by David Mercado/Reuters) 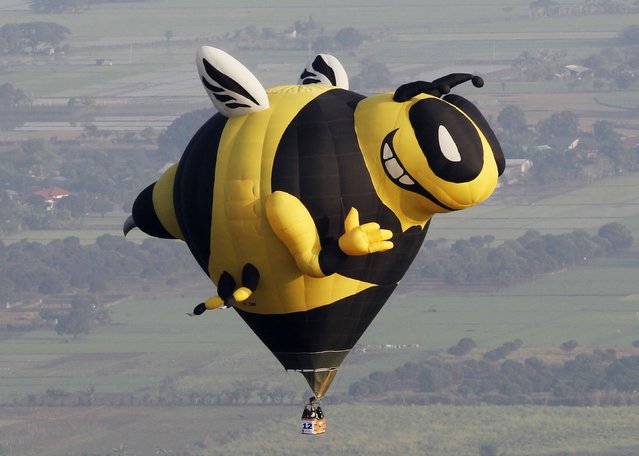 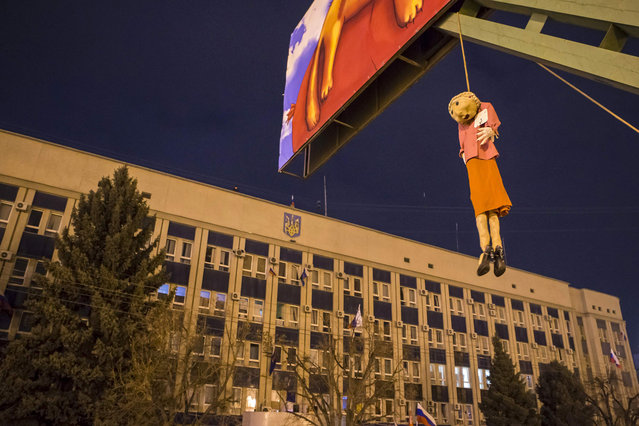 An effigy depicting Ukrainian politician and presidential candidate Yulia Tymoshenko is hanged on a advertisement board in front of the offices of the SBU state security service in Luhansk, in eastern Ukraine April 9, 2014. Pro-Russian separatists reinforced barricades around the state security building in the eastern Ukrainian city of Luhansk on Wednesday and called on President Vladimir Putin for help after the government warned it could use force to restore order. (Photo by Shamil Zhumatov/Reuters) 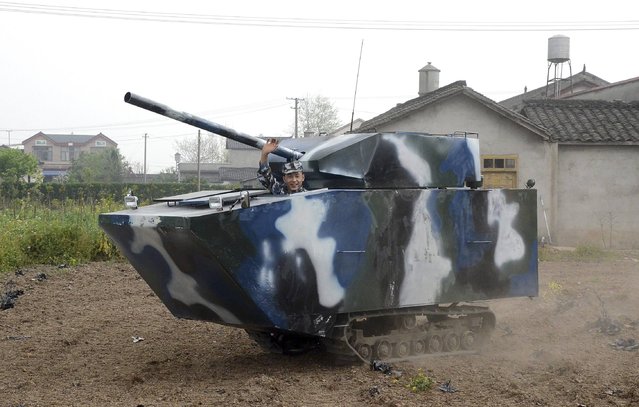