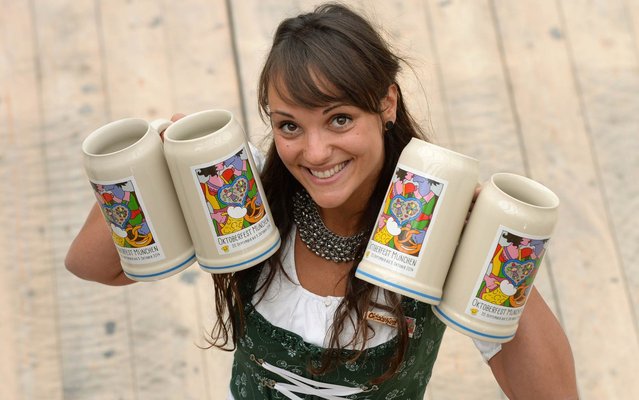 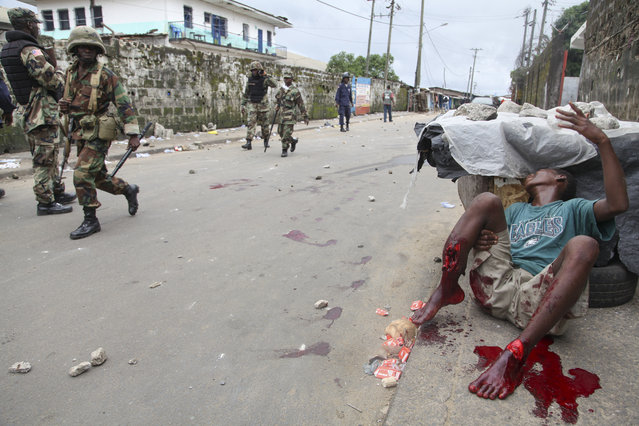 A Liberian boy reacts after being injured during clashes with Liberian security forces in the West Point area of Monrovia, Liberia, August 20, 2014. Residents were protesting against government's decision to quarantine the slum area of West Point in order to contain the spread of Ebola. The quartine in West Point and a national curfew are the most recent measures imposed by government in the fight to curb the spread. The World Health Organization (WHO) has said the number of deaths from Ebola has risen to 1,229 in West Africa. (Photo by Ahmed Jallanzo/EPA) 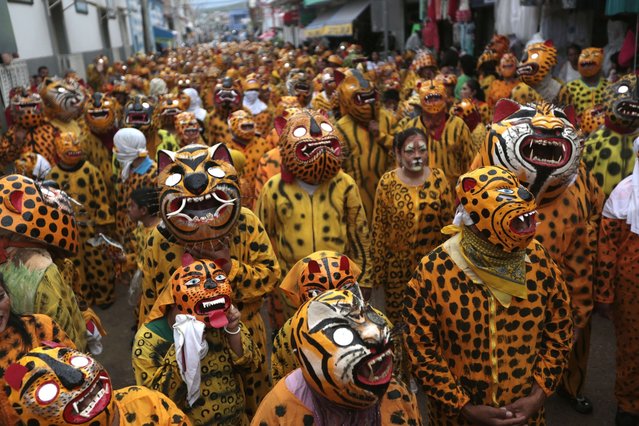 People dressed up as tigers take part in a traditional parade to ask for rain and plenty of crops, in Chilapa, Guerrero State, Mexico, on August 16, 2014. (Photo by Pedro Pardo/AFP Photo) 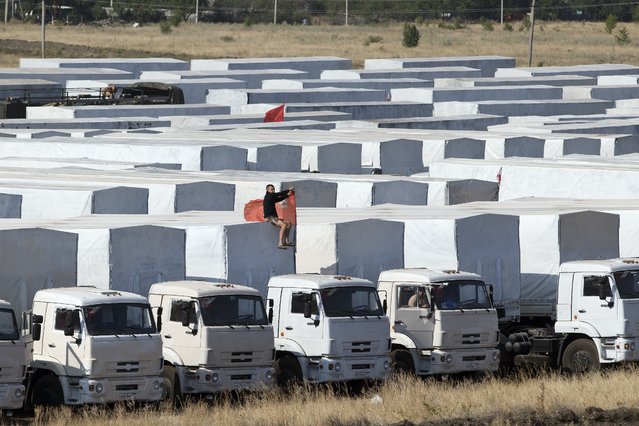 A driver sets straight the flag of the Moscow region on one of the trucks of the aid convoy is parked a field about 28 kilometers (17 miles) from the Ukrainian border, near Kamensk-Shakhtinsky, Rostov-on-Don region, Russia, Wednesday, August 20, 2014. Tensions in the region have been high since Russia announced plans last week to send an aid convoy of more than 200 trucks to help alleviate the unfolding humanitarian crisis in the east. The International Committee of the Red Cross, which is expected to take responsibility for the convoy when it enters Ukraine, was still awaiting security guarantees from all sides. (Photo by Pavel Golovkin/AP Photo) 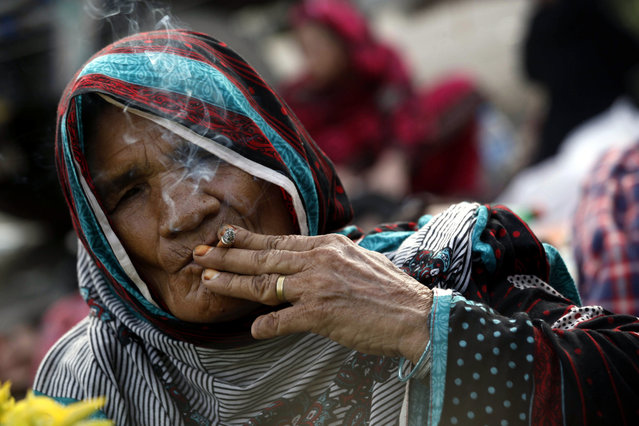 A supporter of Tahirul Qadri, a Pakistani-Canadian cleric, smokes as she continues her sit-in protest for the sixth day in Islamabad, Pakistan, August 20, 2014. Thousands of anti-government protesters led by Imran Khan and Canada-based cleric Tahirul Qadri marched towards the red zone amid fears that a prolonged confrontation might lead to a military coup a year after the country's first democratic transfer of power. Pakistani authorities deployed thousands of police and soldiers to maintain peace and stop any incursion to the red zone where key offices and foreign missions are located. The situation is tense amid fears of terrorists attacks on any of the installations or protestors. (Photo by Bilawal Arbab/EPA) 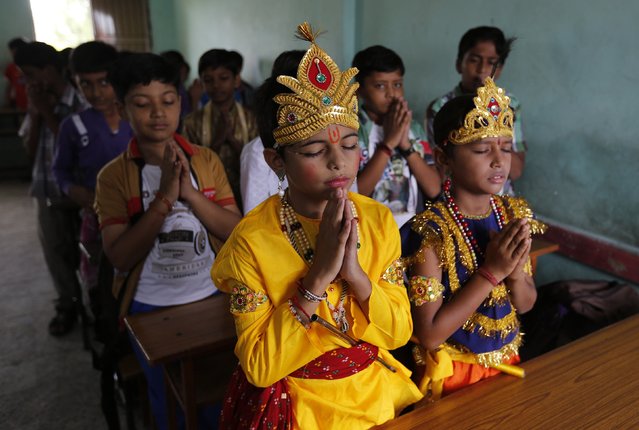 Students dressed as Hindu Lord Krishna (C) and his consort Radha (R) offer school prayers inside their classroom during celebrations marking the Janmashtami festival in the western Indian city of Ahmedabad August 16, 2014. The festival, which marks the birth anniversary of Lord Krishna, will be celebrated across India on Monday. (Photo by Amit Dave/Reuters) 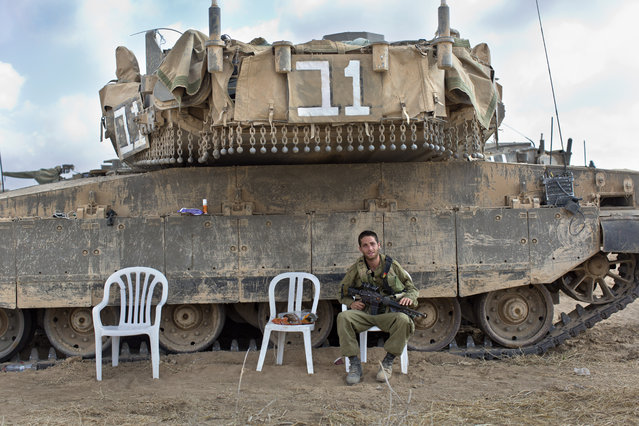 An Israeli soldier sits next to a Merkava tank in a staging area in southern Israel, along the border with the Gaza Strip, August 19, 2014. The Israeli military said three rockets had been fired from the Gaza Strip into southern Israel despite a ceasefire. (Photo by Jim Hollander/EPA) 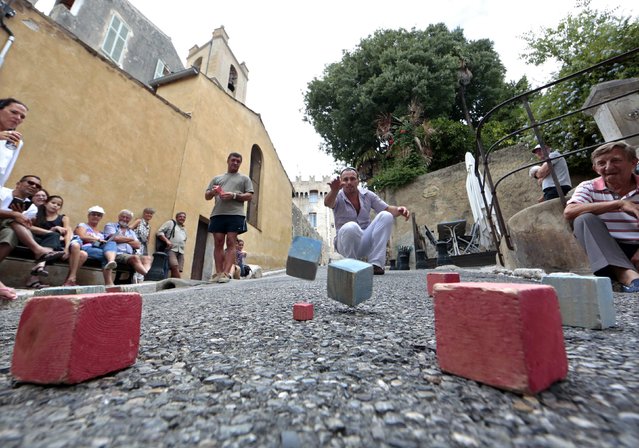 A competitor strikes a boule as he attends the square boules world championship in Cagnes, August 16, 2014. 330 competitors of different countries compete in this unique two days championship. (Photo by Eric Gaillard/Reuters) 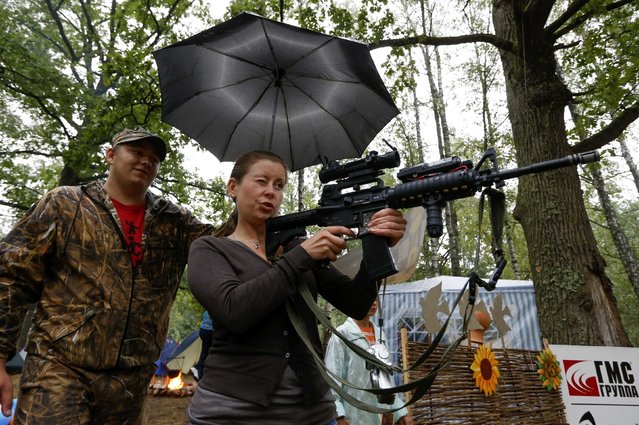 A member from the Belarussian pro-government youth organisation takes aim at balloons with an air gun during their annual meeting in a forest, near the village of Dumanovshchina, southeast of Minsk, August 16, 2014. Through this camp, the group aims to promote patriotism and instil moral values into youth. (Photo by Vasily Fedosenko/Reuters) 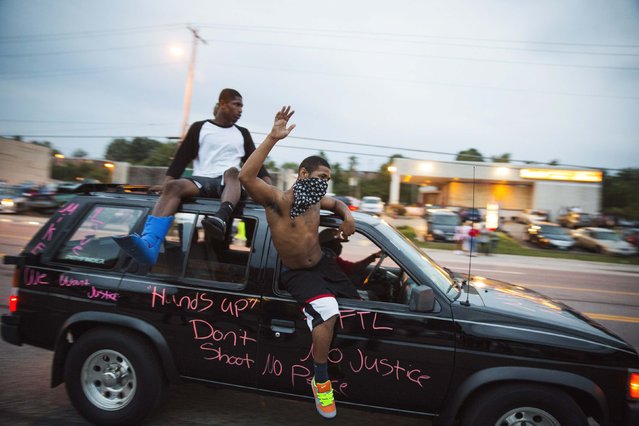 Protesters hang out of a car as they honk their horn and chant during ongoing demonstrations in reaction to the shooting of Michael Brown in Ferguson, Missouri August 16, 2014. Missouri Governor Jay Nixon declared a state of emergency and imposed a curfew in Ferguson on Saturday following a week-long series of racially charged protests and looting over the shooting of the unarmed black teenager by a white police officer. (Photo by Lucas Jackson/Reuters) 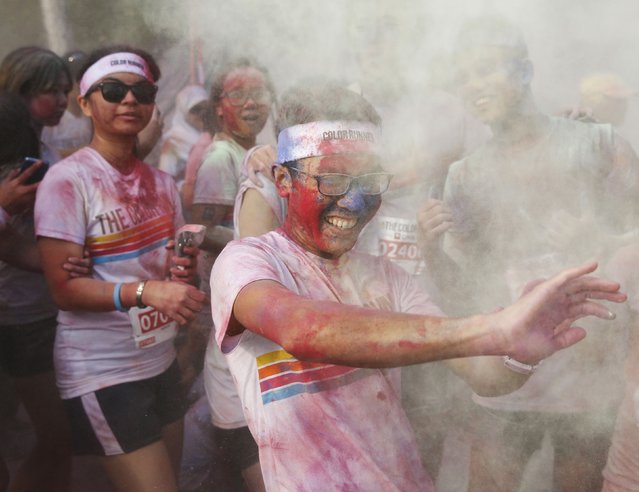 A man reacts as coloured powder is thrown at him during the Color Run in Kuala Lumpur August 17, 2014. (Photo by Olivia Harris/Reuters) 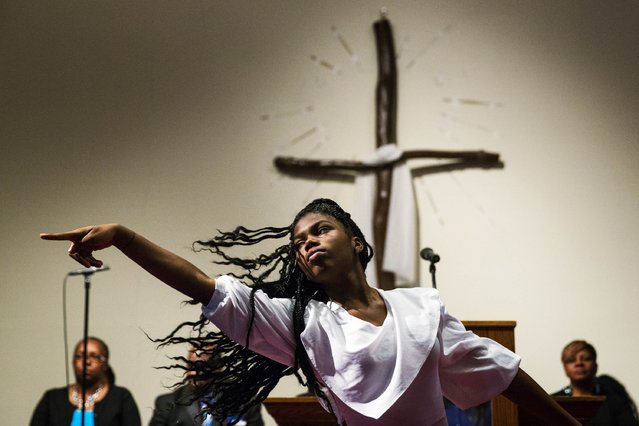 A woman dances during church services at the Greater St Mark Family Church as the community discusses reactions to the shooting of teenager Michael Brown in Ferguson, Missouri August 17, 2014. The Ferguson police department has come under strong criticism for both the shooting and its handling of its aftermath. On Sunday U.S. Attorney General Eric Holder ordered a federal medical examiner to perform an autopsy, in addition to one being conducted by state medical examiners. (Photo by Lucas Jackson/Reuters) 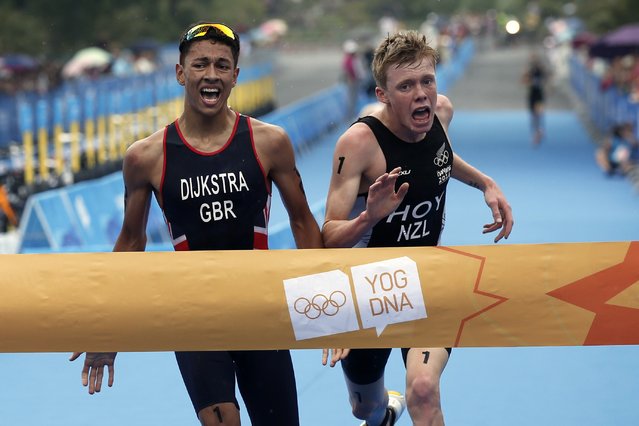 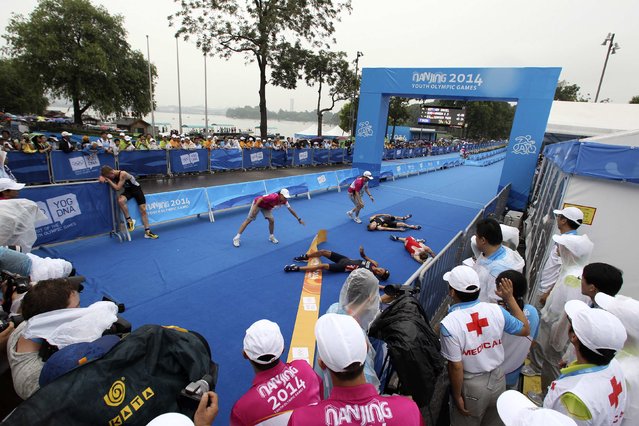 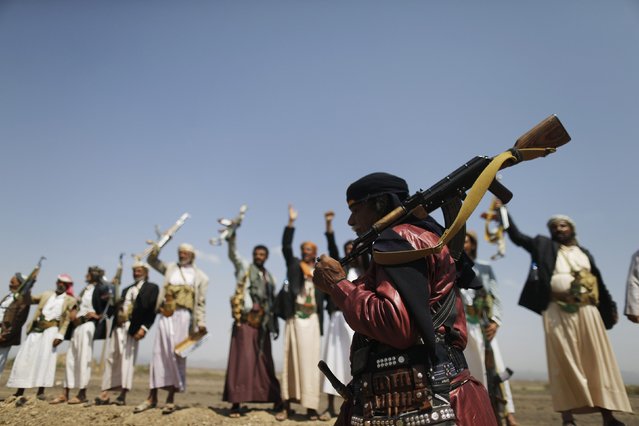 A follower of the Shi'ite Muslim Houthi group carries his weapon on his shoulder as he attends an anti-government gathering in Arhab, north of Yemen's capital Sanaa August 17, 2014. The Houthis, who control much of the northern Saada province bordering Saudi Arabia, are trying to consolidate their power in the north as the country moves towards a federal system that gives more power to regional authorities. (Photo by Khaled Abdullah/Reuters) 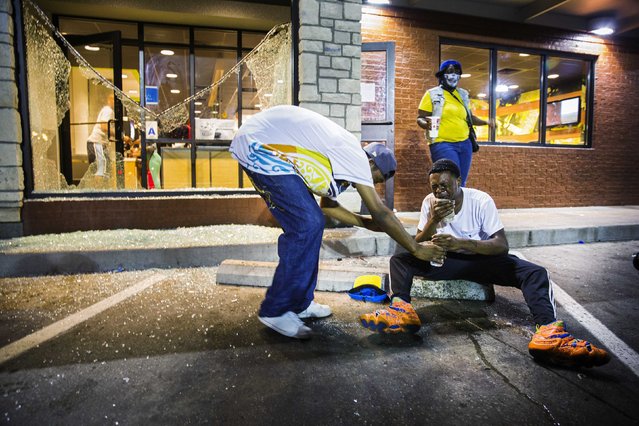 Protesters react to the effects of tear gas which was fired at demonstrators reacting to the shooting of Michael Brown in Ferguson, Missouri August 17, 2014. Shots were fired and police shouted through bullhorns for protesters to disperse, witnesses said, as chaos erupted Sunday night in Ferguson, Missouri, which has been racked by protests since the unarmed black teenager was shot by police last week. (Photo by Lucas Jackson/Reuters) 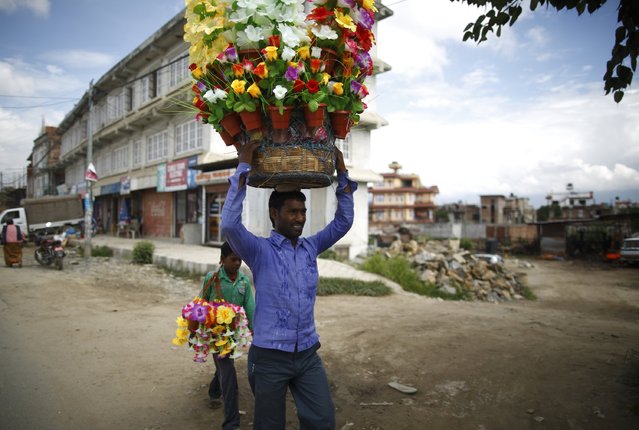 A street vendor carrying plastic flowers walks along the street to sell them in Lalitpur August 18, 2014. (Photo by Navesh Chitrakar/Reuters) 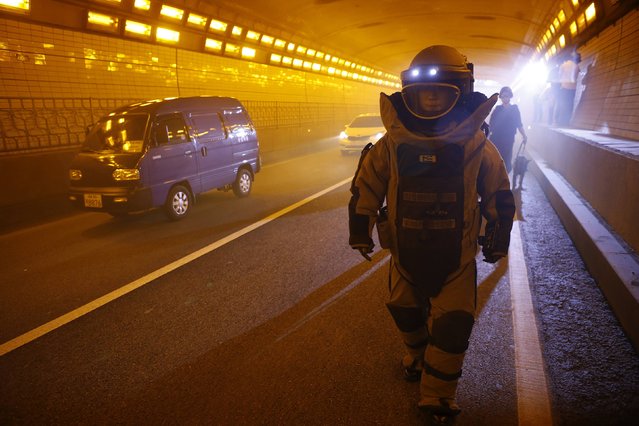 A member of the Special Weapon and Tactics (SWAT) unit, wearing a bomb suit, takes part in an anti-terror drill in Seoul August 18, 2014. South Korean and U.S. forces began on Monday the Ulchi Freedom Guardian (UFG) drill, an annual joint exercise to test their defence ability against North Korea. The drill will last until August 29, according to local media. (Photo by Kim Hong-Ji/Reuters) 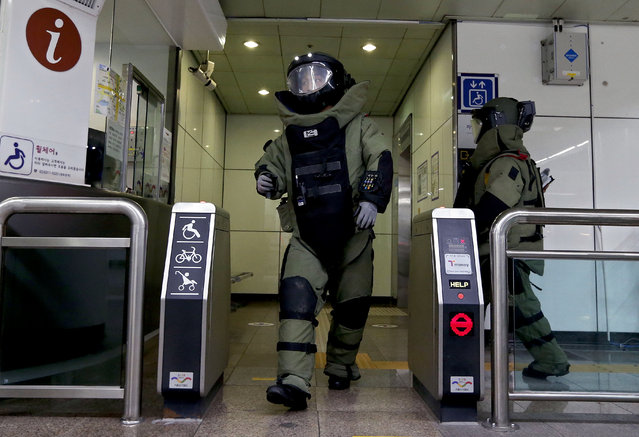 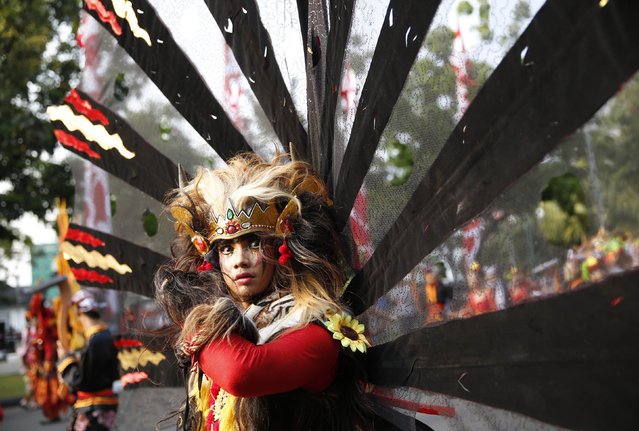 An Indonesian dancer waits for the start of a cultural parade marking the country's 69th Independence Day celebration in Jakarta August 18, 2014. (Photo by Darren Whiteside/Reuters) 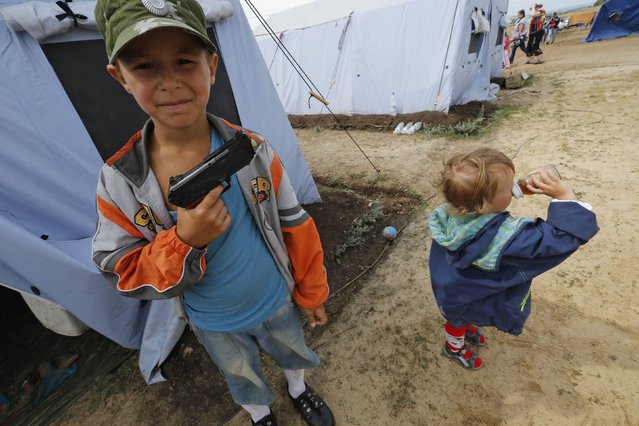 Maxim, 7, who arrived from the eastern Ukrainian town of Horlivla (Gorlovka), poses with a toy gun at a temporary tent camp set up for Ukrainian refugees outside Donetsk, located in Russia's Rostov region near the Russian-Ukrainian border, August 18, 2014. (Photo by Alexander Demianchuk/Reuters) 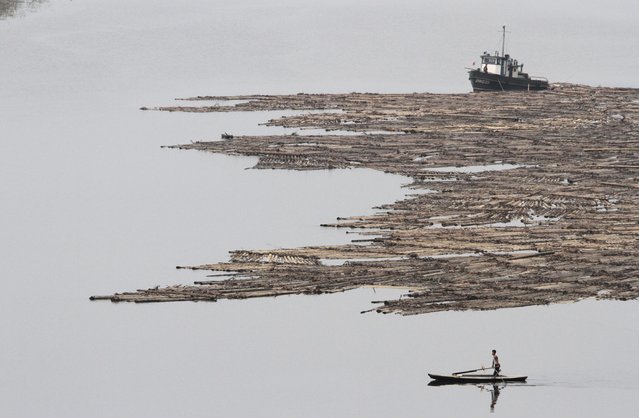 A North Korean man rows a boat past logs, which were tied together and transported by boats on the Yalu River near the North Korean city of Hyesan, Ryanggang province August 16, 2014. (Photo by Jacky Chen/Reuters) 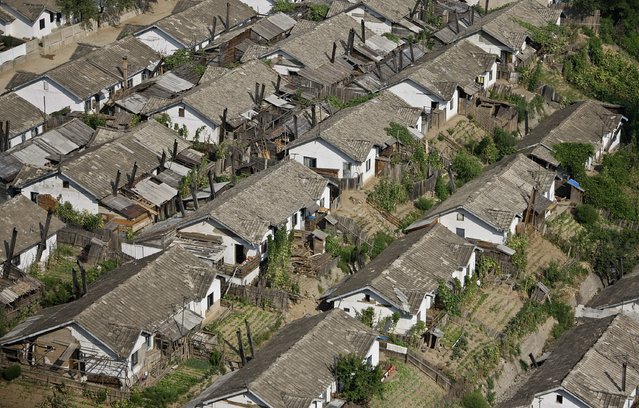 Residential houses and farmlands are seen on the banks of Yalu River in North Korean city of Manpo, Chagang province, August 16, 2014. (Photo by Jacky Chen/Reuters) 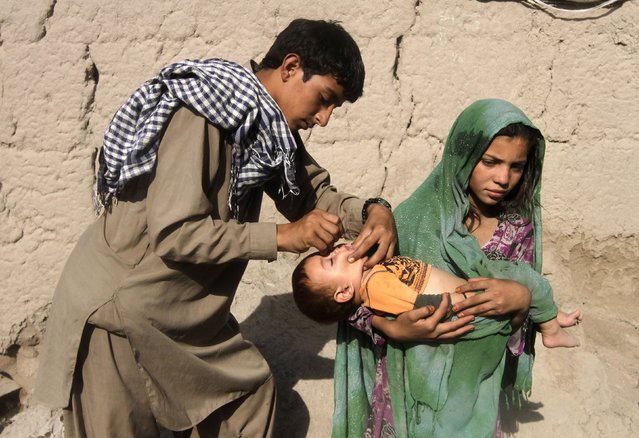 A child receives polio vaccination during an anti-polio campaign on the outskirts of Jalalabad August 18, 2014. (Photo by Reuters/Parwiz) 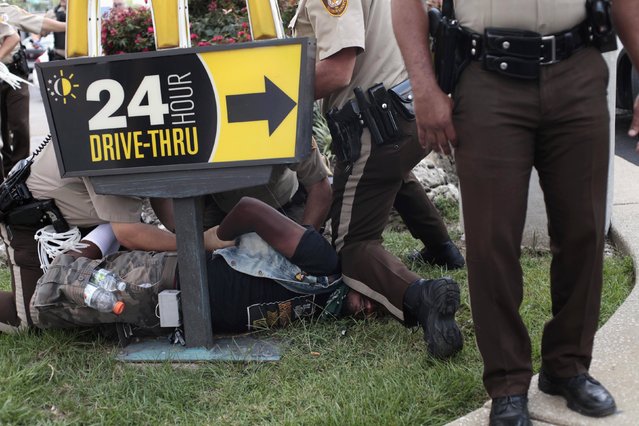 Police officers detain a demonstrator for protesting Michael Brown's murder in Ferguson, Missouri August 18, 2014. Missouri Governor Jay Nixon lifted the curfew for the St. Louis suburb of Ferguson on Monday and began deploying National Guard troops to help quell days of rioting and protests spurred by the fatal shooting of the black unarmed teenager by a white policeman. (Photo by Joshua Lott/Reuters) 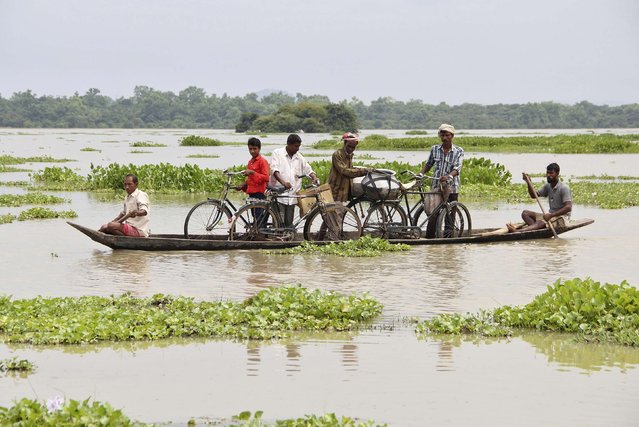 Villagers transport their bicycles on a boat through the flooded areas of Morigaon district in the northeastern Indian state of Assam August 18, 2014. The latest heavy rains have caused landslides and floods in many parts of India and Nepal, where at least 90 people have been killed since Thursday. (Photo by Reuters/Stringer) 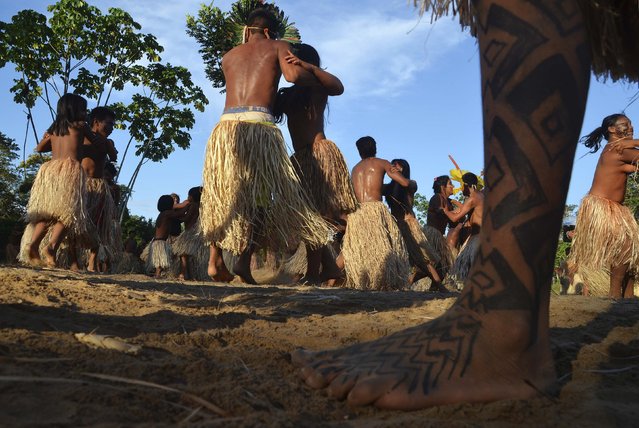 Yawanawa Indians dance during the Mariri Festival in the village of Mutum, in the Amazon forest of Acre state, August 11, 2014. The Yawanawa people, who live on a reservation in northwestern Brazil that was demarcated in 1933, spend five days each August celebrating their way of life through dance, art, and cultural expression. (Photo by Odair Leal/Reuters) 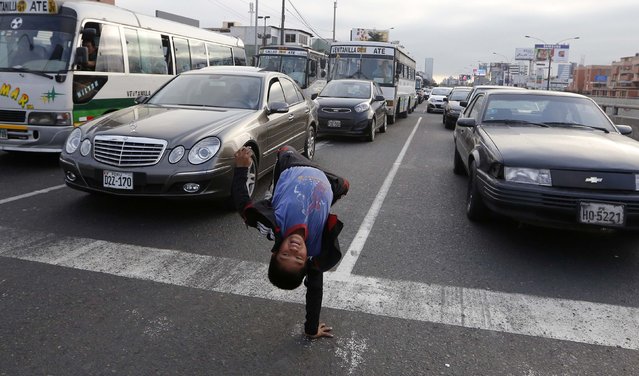 Eleven-year-old Renzo somersaults at a traffic junction in the San Borja district in Lima August 18, 2014. Renzo and his 9-year-old brother Gianpierre perform on streets to make a living from tips given by drivers, make an average of $7 a day between the two brothers. They work on the streets after school to help their parents, whom they live with, with household expenses. (Photo by Mariana Bazo/Reuters) 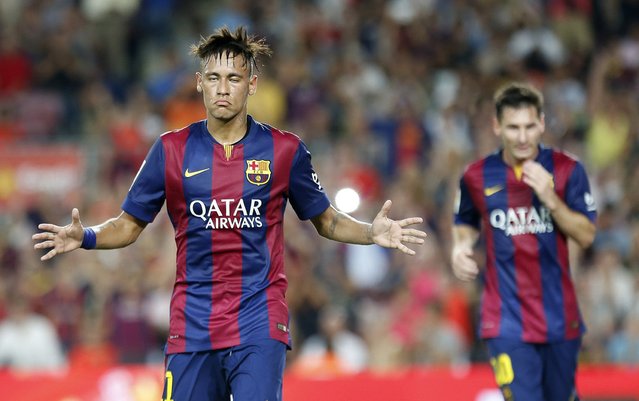