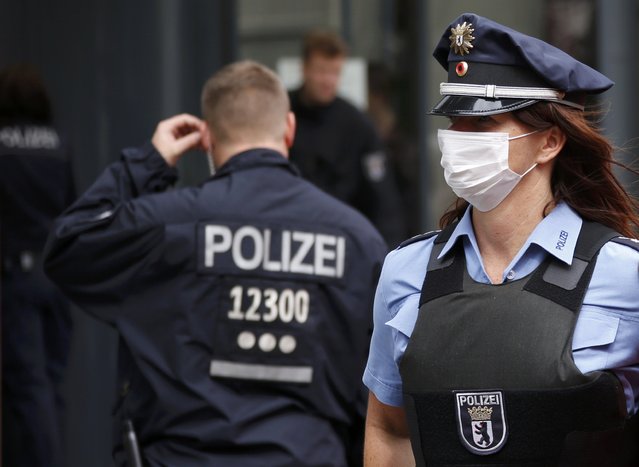 A police officer wearing a face mask stands outside the job centre in the Berlin district of Pankow August 19, 2014. A woman who showed symptoms of an infectious disease while at the job centre, was transported by emergency services to Charitie hospital on Tuesday. (Photo by Fabrizio Bensch/Reuters) 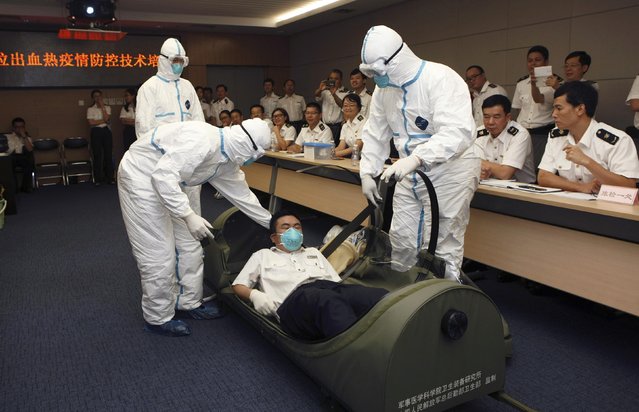 Health inspection officers help a mock patient (C) get into a negative pressure isolation stretcher, during a drill to demonstrate the procedures of transporting an Ebola victim, at Shenzhen Entry-exit Inspection and Quarantine Bureau, in Shenzhen, Guangdong province August 14, 2014. China's quarantine authority has intensified inspections at customs to prevent the deadly Ebola virus, which killed over 1,000 people in Africa, from entering the country, Xinhua News Agency reported. (Photo by Reuters/Stringer) 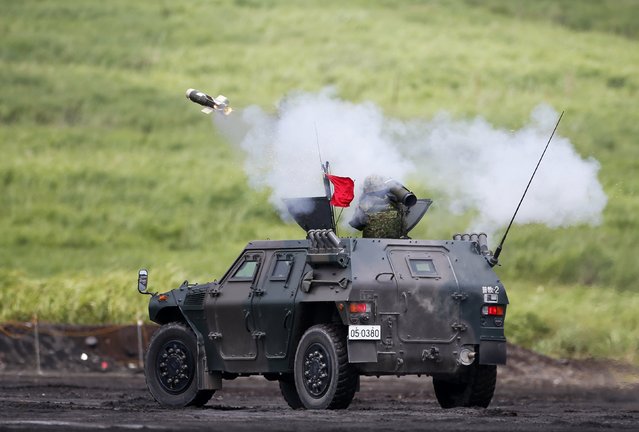 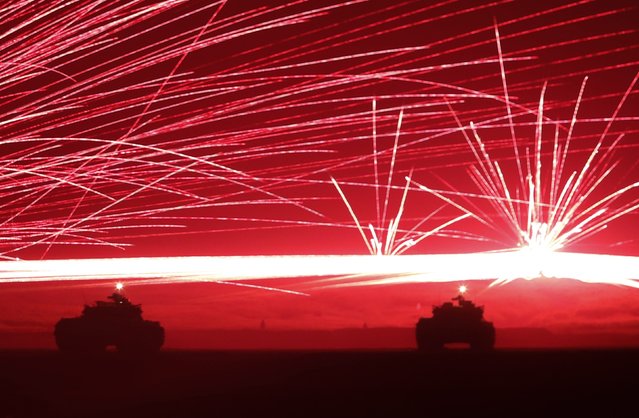 Tracer bullets ricochet off their targets as Japanese Ground Self-Defence Force tanks fire their machine guns during a night session of an annual training exercise at Higashifuji training field near Mount Fuji in Gotemba, west of Tokyo, August 19, 2014. Japanese battle tanks, helicopters and elite troops stormed the foothills of Mount Fuji Tuesday in a first-of-its-kind display of the tactics and equipment the nation's military could use to defend or retake islands in and around the East China Sea. (Photo by Yuya Shino/Reuters) 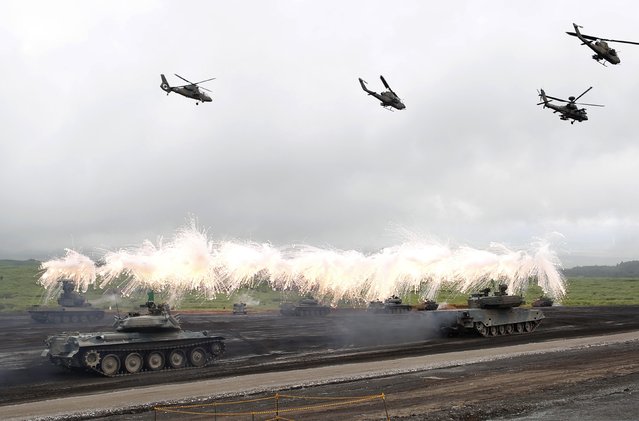 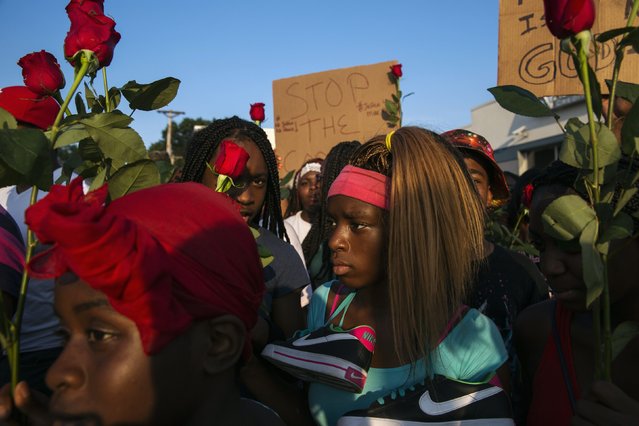 Demonstrators march down West Florissant during a peaceful march in reaction to the shooting of Michael Brown, near Ferguson, Missouri August 18, 2014. Missouri's governor lifted the curfew for the St. Louis suburb of Ferguson on Monday as National Guard troops were called out after days of violent unrest sparked by the fatal shooting of an unarmed black teenager by a white policeman. (Photo by Lucas Jackson/Reuters) 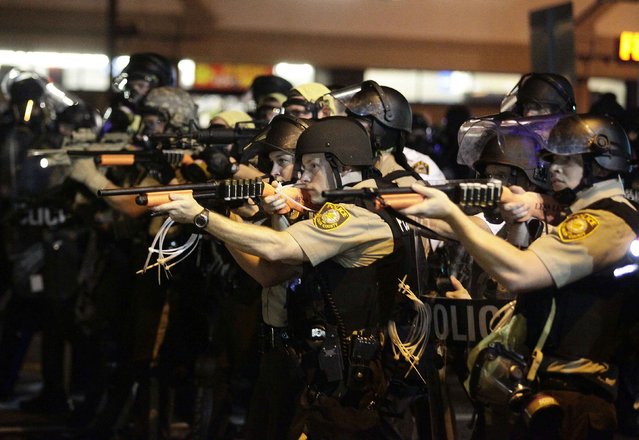 Police officers point their weapons at demonstrators protesting against the shooting death of Michael Brown in Ferguson, Missouri August 18, 2014. Police fired tear gas and stun grenades at protesters on Monday after days of unrest sparked by the fatal shooting of unarmed black teenager Michael Brown by a white policeman. (Photo by Joshua Lott/Reuters) 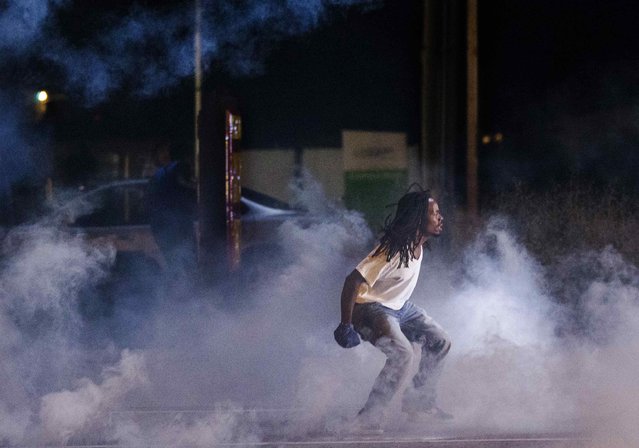 A protester yells towards police in a cloud of tear gas after protests in reaction to the shooting of Michael Brown turned violent near Ferguson, Missouri August 17, 2014. Shots were fired and police shouted through bullhorns for protesters to disperse, witnesses said, as chaos erupted Sunday night in Ferguson, Missouri, which has been racked by protests since an unarmed black teenager was shot by police last week. (Photo by Lucas Jackson/Reuters) 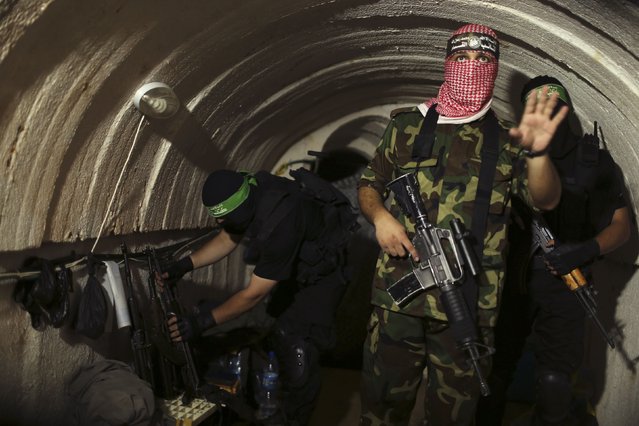 A Palestinian fighter from the Izz el-Deen al-Qassam Brigades, the armed wing of the Hamas movement, gestures inside an underground tunnel in Gaza August 18, 2014. A rare tour that Hamas granted to a Reuters reporter, photographer and cameraman appeared to be an attempt to dispute Israel's claim that it had demolished all of the Islamist group's border infiltration tunnels in the Gaza war. (Photo by Mohammed Salem/Reuters) 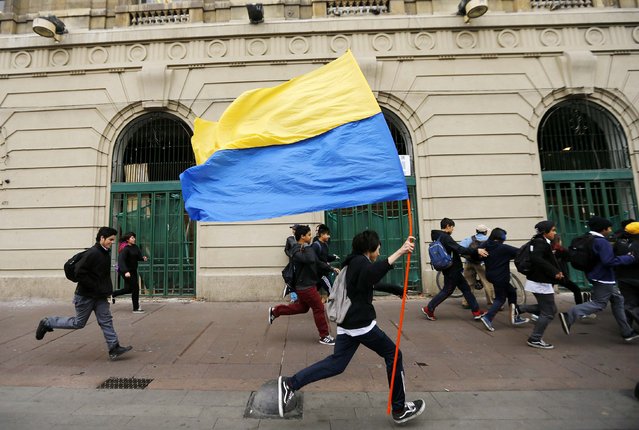 High school students run away from the riot police during a rally in downtown Santiago, August 19, 2014. The rally was held after the Santiago Court of Appeals ruled in favor of prohibiting the occupations of educational institutions by students. (Photo by Ivan Alvarado/Reuters) 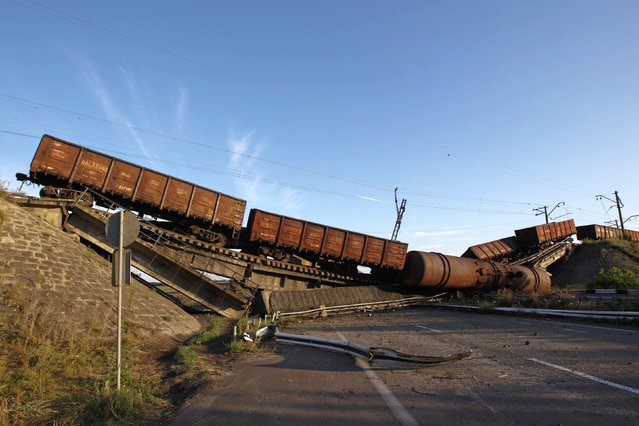 Train wagons are seen on the destroyed railway bridge which collapsed during the fighting between the Ukrainian army and pro-Russian separatists, over a main road leading to the eastern Ukrainian city of Donetsk, near the village of Novobakhmutivka, north of Donetsk city, August 19, 2014. (Photo by Valentyn Ogirenko/Reuters) 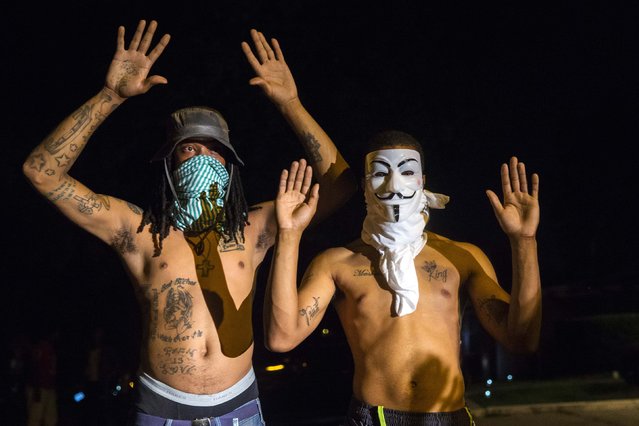 Members of a rowdy group of demonstrators stand with their hands up as they are lit by a police spotlight on West Florissant during protests in reaction to the shooting of Michael Brown near Ferguson, Missouri August 18, 2014. Police fired tear gas and stun grenades at protesters in Ferguson, Missouri on Monday, after days of unrest sparked by the fatal shooting of an unarmed black teenager by a white policeman. (Photo by Lucas Jackson/Reuters) 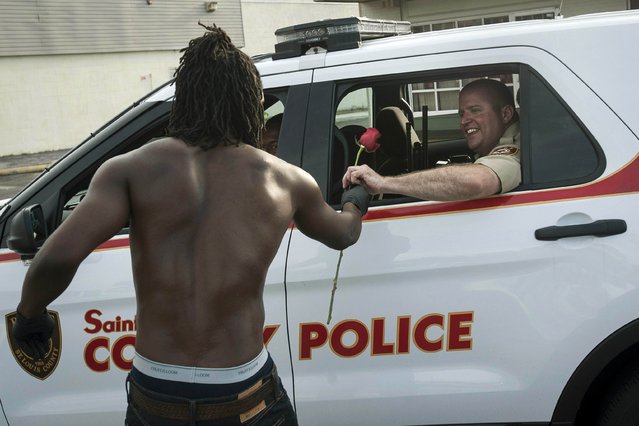 Resident John West (L) hands a rose to a police officer, showing his appreciation with help in cleanup efforts in Ferguson, Missouri, August 19, 2014. Dangerous protests continued overnight as police fired tear gas and rubber bullets as shots were reportedly fired by people in the crowd and crowds failed to disperse. (Photo by Mark Kauzlarich/Reuters) 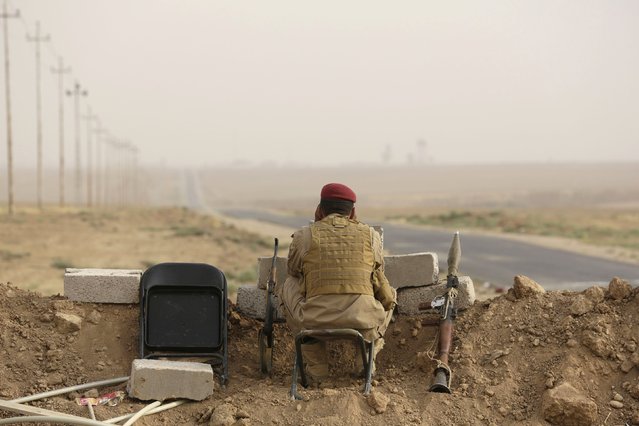 A Kurdish fighter keeps guard while overlooking positions of Islamic State militants near Mosul in northern Iraq August 19, 2014. Sunni Muslim fighters led by the Islamic State swept through much of northern and western Iraq in June, capturing the Sunni cities of Tikrit and Mosul as well as the Mosul dam, which controls water and power supplies to millions of people down the Tigris river valley. (Photo by Youssef Boudlal/Reuters) 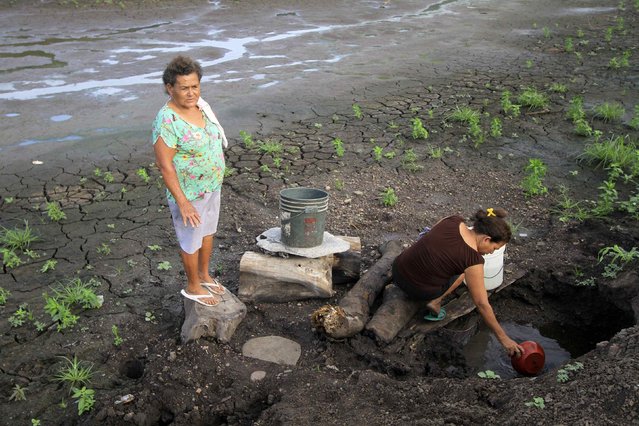 Women look for water at Santa Isabel August 19, 2014. According to a recent report by the Famine Early Warning Systems Network (FEWS NET), run by the US Agency for International Development (USAID), low rainfall linked to the El Nino weather phenomenon has led to drought in parts of Central America, causing widespread damage to crops, shortages and rising prices of food, and worsening hunger among the region's poor. (Photo by Oswaldo Rivas/Reuters) 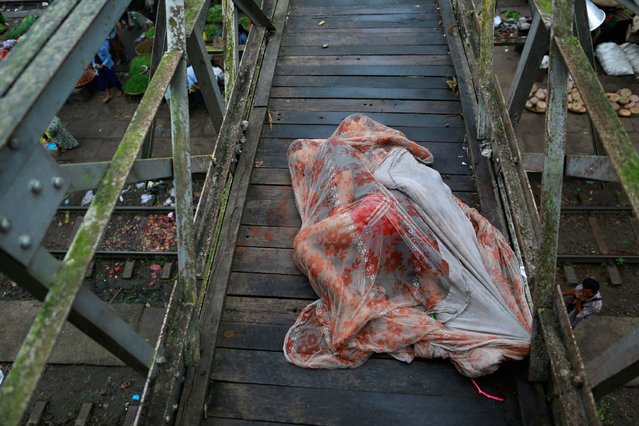 Men sleep covered with a mosquito net on a bridge above a train station outside Yangon, Myanmar, on August 20, 2014. (Photo by Soe Zeya Tun/Reuters) 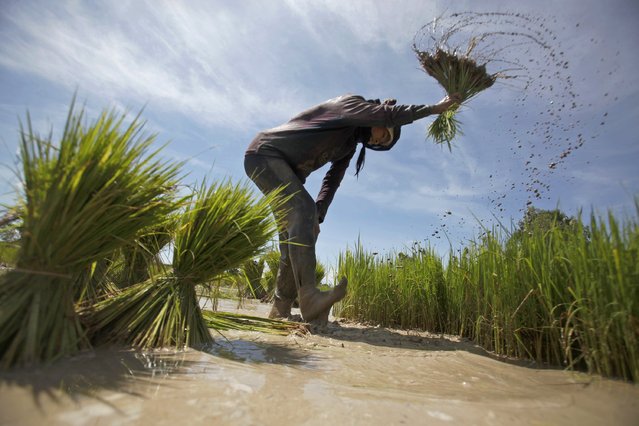 A girl works at a rice paddy field on the outskirts of Phnom Penh August 20, 2014. (Photo by Samrang Pring/Reuters) 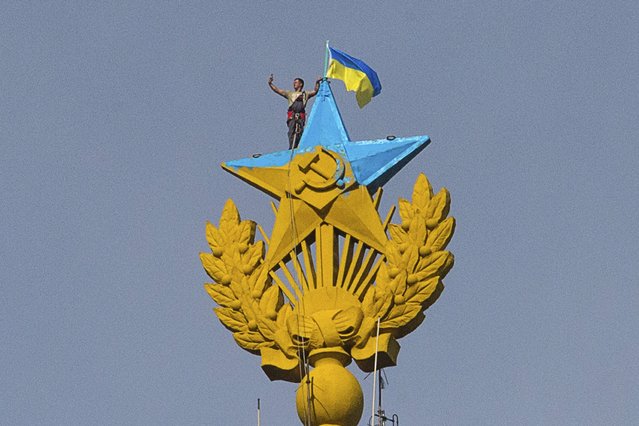 A man takes a “selfie” as he stands with a Ukrainian flag on a Soviet-style star re-touched with blue paint so it resembles the yellow-and-blue national colours of Ukraine, atop the spire of a building in Moscow August 20, 2014. Russian police said on Wednesday they had charged four young people with vandalism after they climbed to the top of a Moscow skyscraper and briefly attached a Ukrainian flag to its spire. (Photo by Ilya Varlamov/Reuters) 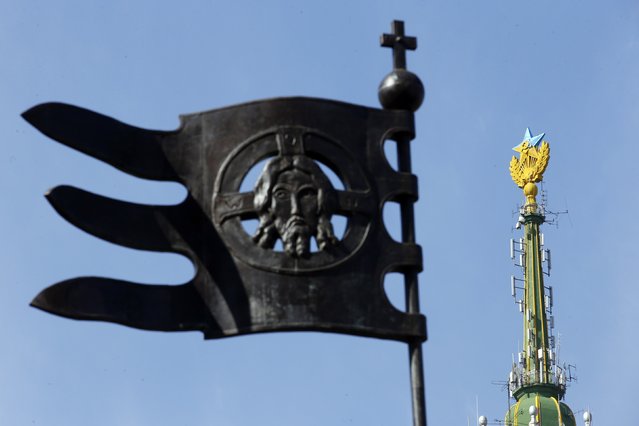 A Soviet-style star re-touched with blue paint so it resembles the yellow-and-blue national colours of Ukraine, is seen atop the spire of a building in Moscow August 20, 2014. (Photo by Maxim Zmeyev/Reuters) 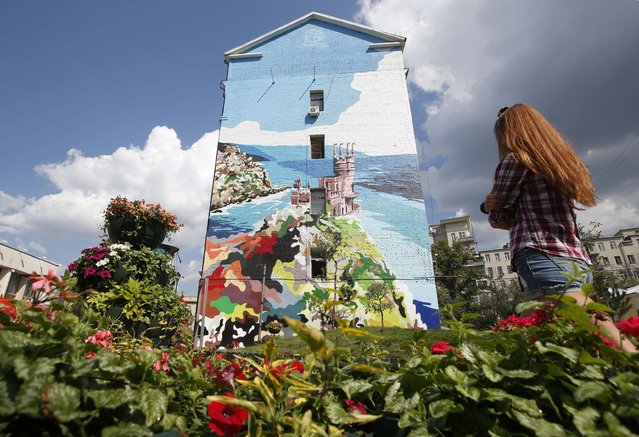 A woman walks past a mural on the side of a building which depicts the Swallow's Nest castle overlooking the Black Sea outside the Crimean town of Yalta, in Moscow, August 20, 2014. (Photo by Maxim Zmeyev/Reuters) 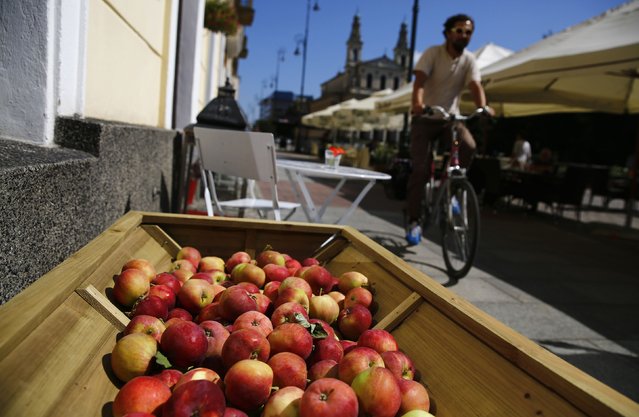 Apples are displayed outside a restaurant as a man rides past on a bicycle in central Warsaw August 20, 2014. According to a representative of the restaurant, they are giving away free apples to everyone to support Polish farmers in reaction to Russian food sanctions. EU fruit and vegetable growers will get financial aid of up to 125 million euros ($167 million) to help them cope with Russia's ban on most Western food imports, which has created a glut of produce in peak harvest time, the European Commission said on Monday. Russia has declared a one-year embargo on meat, fish, dairy, fruit and vegetables from the United States, the European Union, Canada, Australia and Norway in retaliation for Western economic sanctions over Moscow's actions in Ukraine. The EU funding will cover produce such as tomatoes, apples, cauliflowers, mushrooms, grapes, cucumbers, strawberries and blackcurrants, which lack storage options and have no immediate alternative markets to make up for the absence of Russia. (Photo by Kacper Pempel/Reuters) 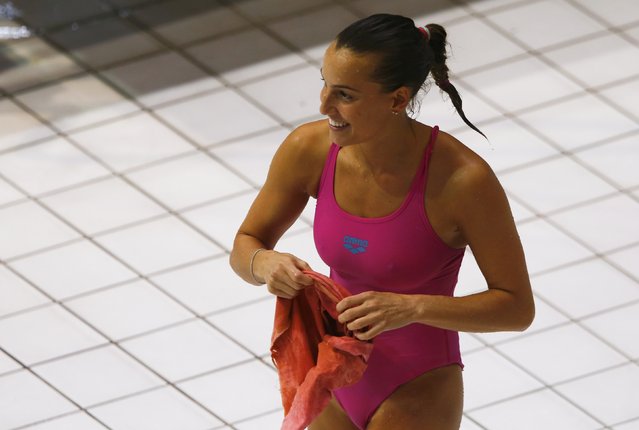 Tania Cagnotto of Italy reacts after winning the 1m springboard final at the European Swimming Championships in Berlin August 20, 2014. (Photo by Michael Dalder/Reuters) 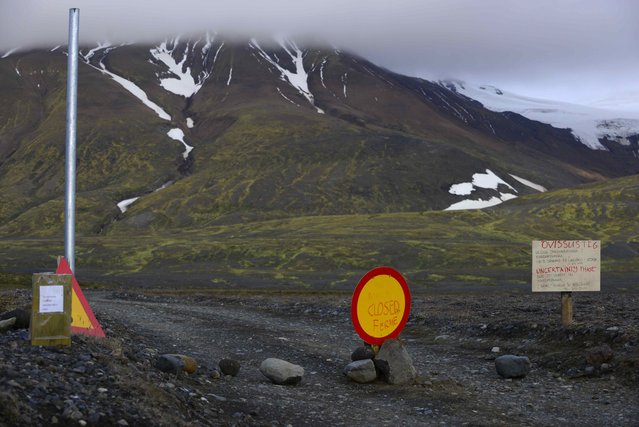 Warning signs block the road to Bardarbunga volcano, about 12.5 miles away, in the northwest region of the Vatnajokull glacier in Iceland on August 17, 2014, where intense seismic activity and ongoing magma movement have been reported. (Photo by Sigtryggur Johannsson/Reuters) 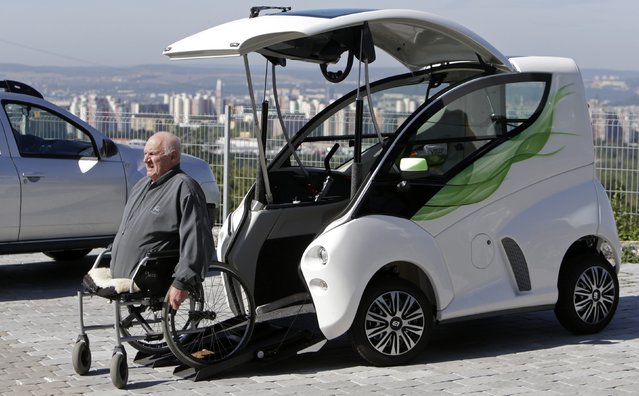 Frantisek Trunda, 67, who lost his legs in 2006, moves himself into his Elbee vehicle while seated on a wheelchair in Brno August 18, 2014. The Elbee is a vehicle designed specifically for wheelchair-bound people, and allows them to drive the vehicle without needing to get off their wheelchair or receive assistance from another person. The vehicle stretches 248 centimetres long and 133 centimetres wide, allowing it to be parked vertically on a pedestrian zone for easier boarding and exit from buildings. Factory production of the first batch of Elbee vehicles started this year after completing initial road tests and homologation from local authorities received in 2010. (Photo by David W. Cerny/Reuters) 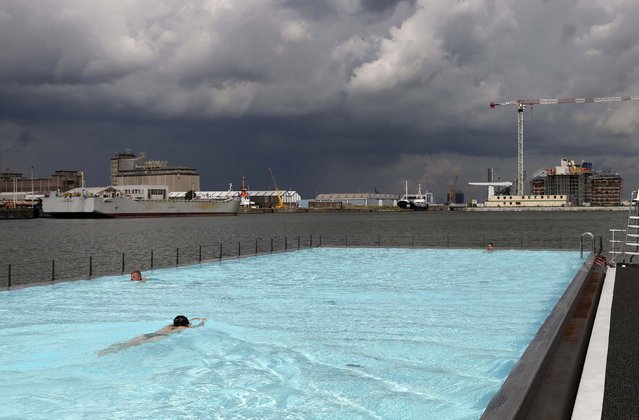 Swimmers enjoy a floating open-air swimming pool called “badboot” in the port of Antwerp August 20, 2014. The venue is located in a 120 metre-long (394 feet) former barge which can accommodate 600 people and consists of two swimming pools, two event venues and a restaurant with a lounge terrace. (Photo by Francois Lenoir/Reuters) 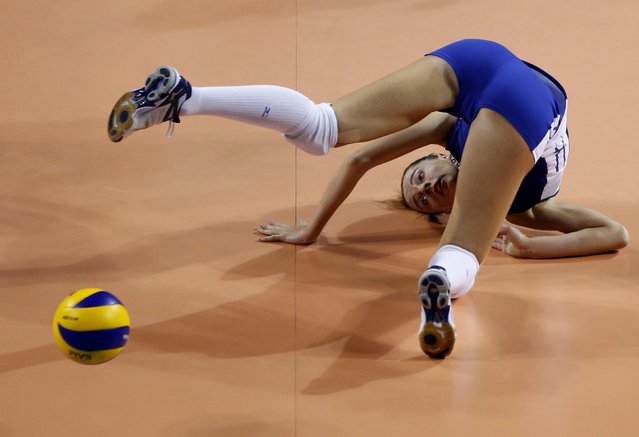 Yana Shcherban of Russia looks at the ball after failing to receive it during their FIVB Women's Volleyball World Grand Prix 2014 final round against Japan in Tokyo August 20, 2014. (Photo by Yuya Shino/Reuters) 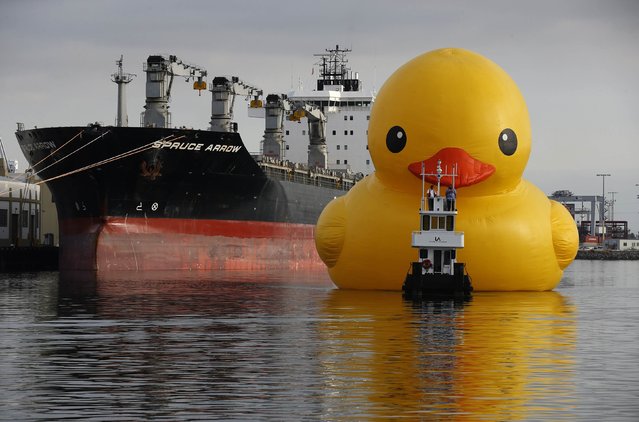 A giant inflatable rubber duck installation by Dutch artist Florentijn Hofman floats through the Port of Los Angeles as part of the Tall Ships Festival, in San Pedro, California August 20, 2014. The creation, which is five stories tall and five stories wide, has been seen floating in various cities around the world since 2007. (Photo by Lucy Nicholson/Reuters) 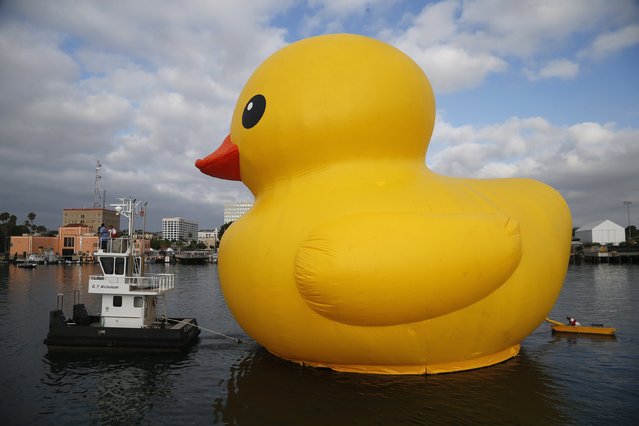 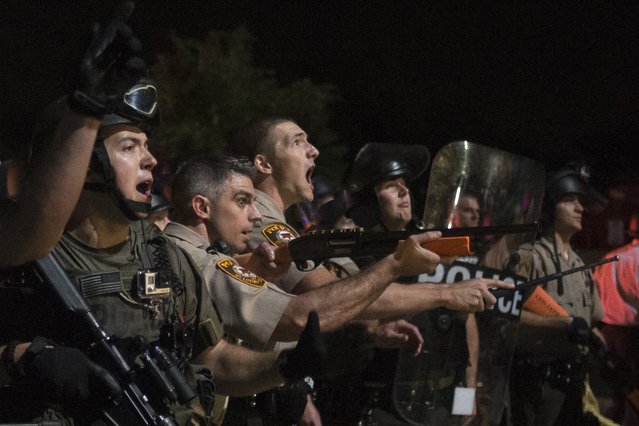 Security forces charge demonstrators after being hit by water bottles during a protest against the shooting of unarmed black teen Michael Brown in Ferguson, Missouri August 20, 2014. Police in riot gear ordered dozens of lingering demonstrators in Ferguson, Missouri, to disperse late on Tuesday and charged into the crowd to make arrests as relative calm dissolved amid protests over the police shooting death of Brown in the St. Louis suburb. (Photo by Adrees Latif/Reuters)
Edit Del
23 Aug 2014 11:29:00, post received 0 comments
Publication archive:
←   →
Popular tags:
All tags
Last searches: