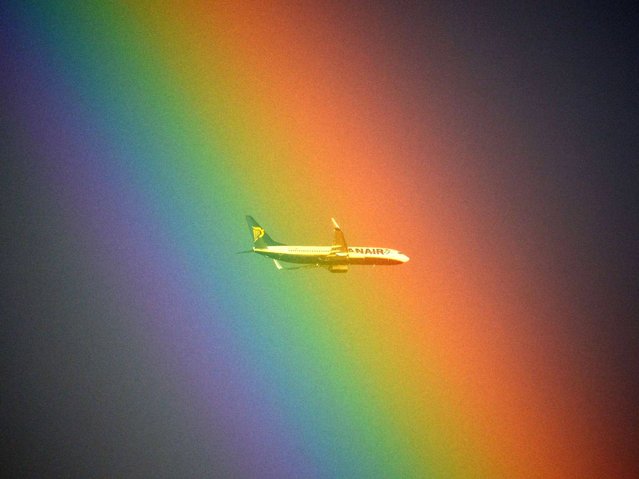 A plane of the Irish low cost company Ryanair flies in front of a rainbow over Rome on January 19, 2014. (Photo by Gabriel Bouys/AFP Photo) 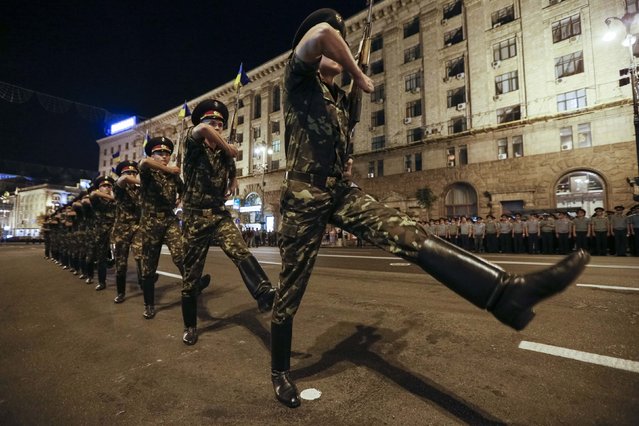 Ukrainian soldiers march along Khreshchatyk street during a rehearsal for the Independence Day parade in Kiev August 20, 2014. The parade will take place this Sunday. (Photo by Gleb Garanich/Reuters) 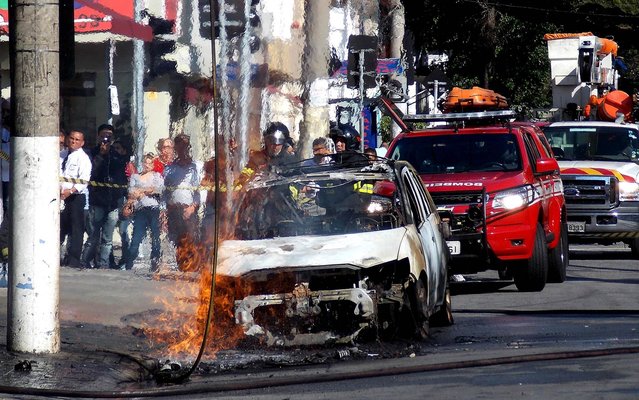 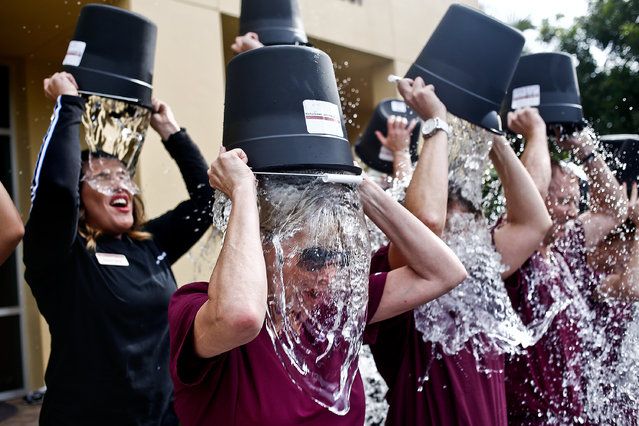 Debbie Wallace, center, dumps a bucket of ice water on her head along with her coworkers as they participate in an Ice Bucket Challenge at the Woodruff Institute in Naples, FL on Tuesday, August 19, 2014. Wallace, a physician assistant at Woodruff, lost her brother Chester to ALS two weeks before and challenged her coworkers in the challenge. The Ice Bucket challenge began on social media on July 29 to benefit ALS or amyotrophic lateral sclerosis. Participants dump a bucket of ice water over their heads, record it and nominate someone else to do the same. If the person nominated doesn't comply or fails to record their video within 24 hours, they must donate cash to benefit ALS research. Between July 29 and Aug. 16, The ALS Association and its 38 chapters have received $11.4 million in donations. (Photo by Scott McIntyre/AP Photo/Naples Daily News) 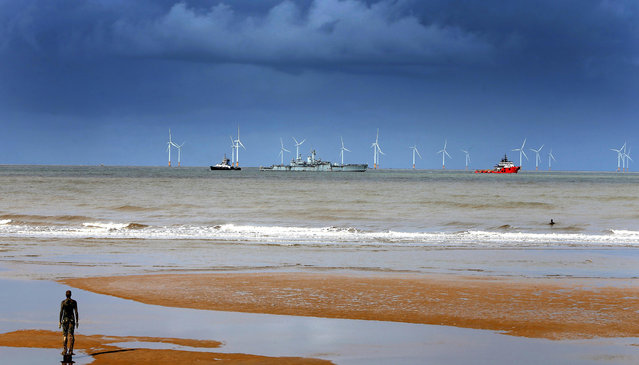 A statue from Another Place by Anthony Gormley is seen in the foreground as HMS Plymouth is towed away from Liverpool to be scrapped, on August 20, 2014. The warship was part of the mission during the Falklands war and is on its way to Turkey where it will be scrapped. (Photo by Peter Byrne/PA Wire) 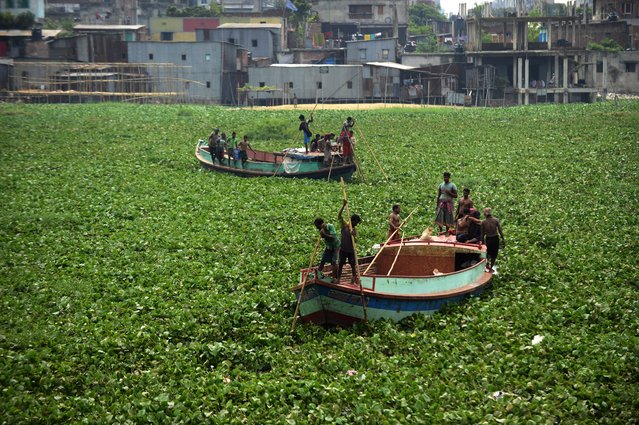 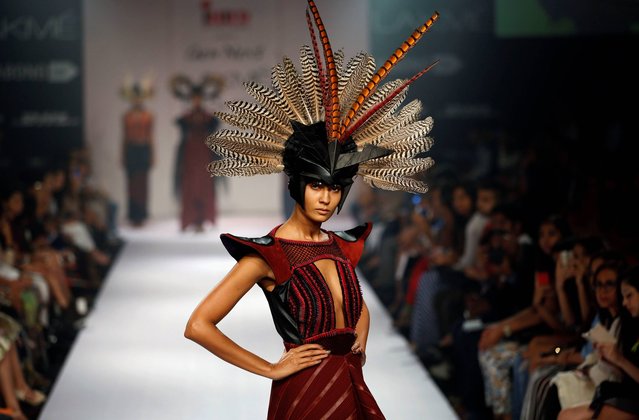 A model displays a creation by a Gen Next designer during the first day of the Lakme Fashion Week in Mumbai, India, Wednesday, August 20, 2014. (Photo by Rajanish Kakade/AP Photo) 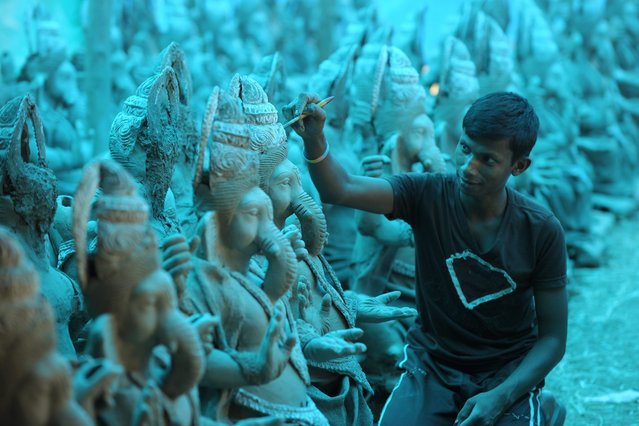 An Indian artisan works on biodegradable idols of Hindu god Lord Ganesh, made of mud and bamboo, at a blue tarp-covered workshop on the outskirts of Hyderabad on August 21, 2014. Some 2,500 idols are being made by the artisans for the upcoming Hindu Ganesh festival, where the idols will be immersed in water bodies as part of religious rituals. (Photo by Noah Seelam/AFP Photo) 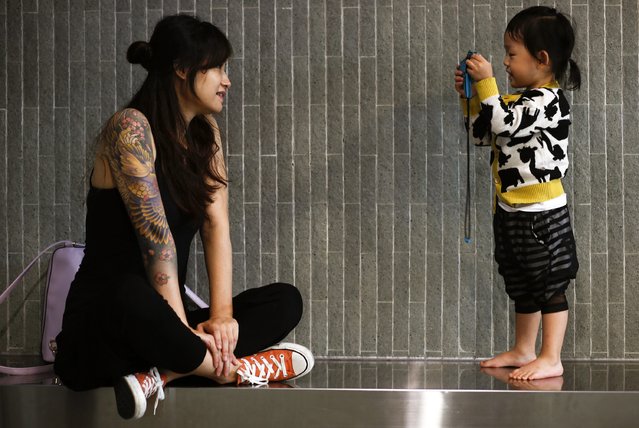 A visitor poses a photo for her daughter at the International Hong Kong China Tattoo Convention in Hong Kong August 22, 2014. The territory held its second international tattoo convention on Friday, hoping to pin Hong Kong onto the global tattoo-map and aiming at changing the perception of tattoos in a city where inked skin is still strongly associated with triads and criminals. (Photo by Bobby Yip/Reuters) 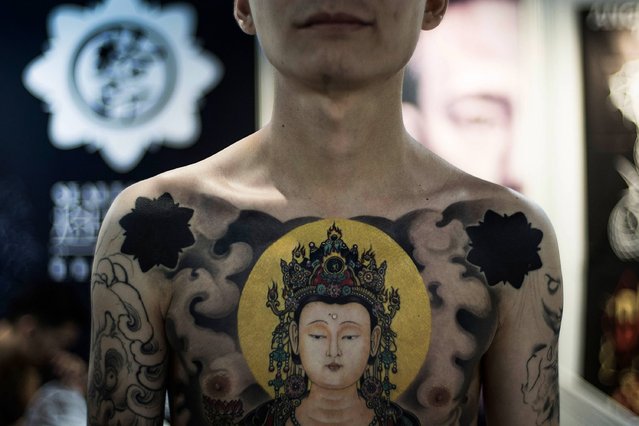 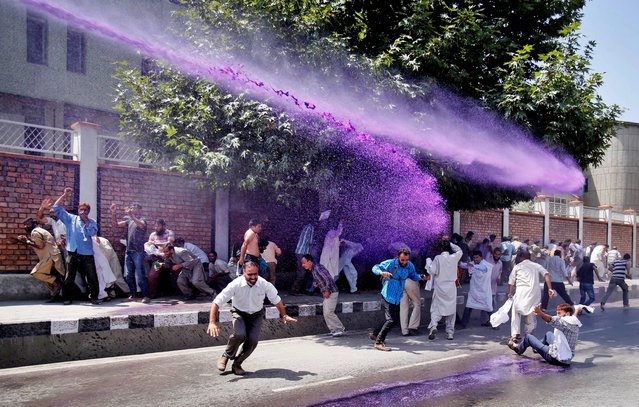 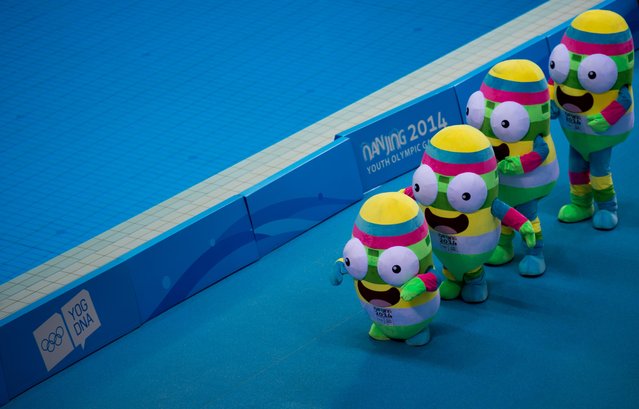 Volunteers dresses as the official mascot perform a dance during the 2014 Youth Olympic Games in Nanjing, in eastern China's Jiangsu province on August 18, 2014. More than 3,700 competitors aged 15 to 18 were expected to participate in the games, with many hoping to build towards a place at the 2016 Summer Games in Rio de Janeiro. (Photo by Johannes Eisele/AFP Photo) 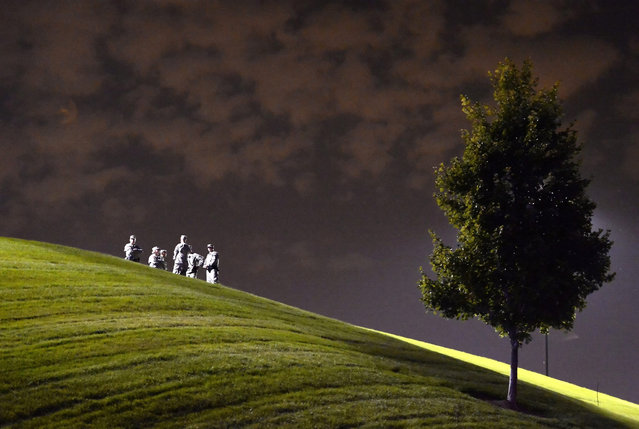 National Guard watch from a small hill top a couple blocks away as demonstrators protest the shooting death of Michael Brown in Ferguson, Missouri, USA, 21 August 2014. The National Guard is to withdraw from Ferguson, Missouri as nearly two weeks of often violent protests have finally waned. Only six arrests were logged overnight in the town, which saw a more peaceful night after steady protests related to the killing of an unarmed black teenager by a policeman. (Photo by Larry W. Smith/EPA) 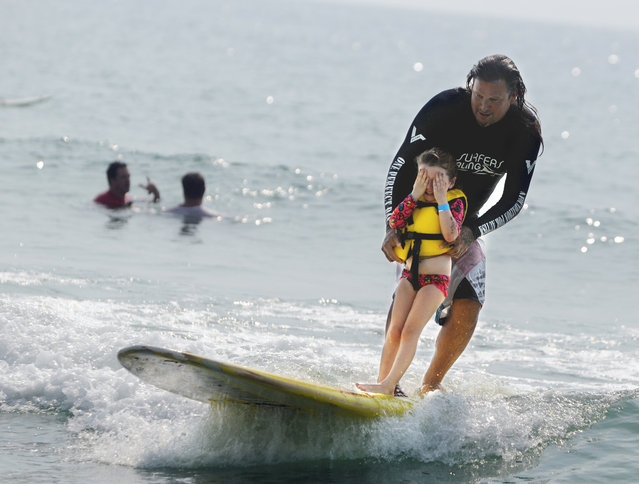 Izzy Paskowitz helps Nixee Grace Chanowsky, 4, catch a wave Monday, August 18, 2014 at Wrightsville Beach, N.C. during the Annual Surfers Healing event for children with autism. Hundreds of people made their way to the beach to watch and cheer on the camp that was founded by Israel and Danielle Paskowitz. (Photo by Mike Spencer/AP Photo/The Star-News) 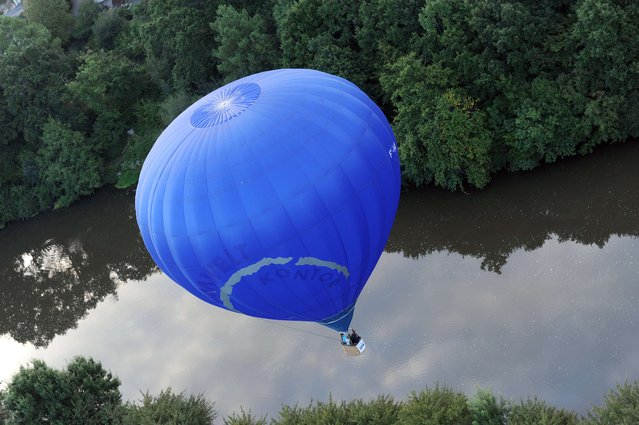 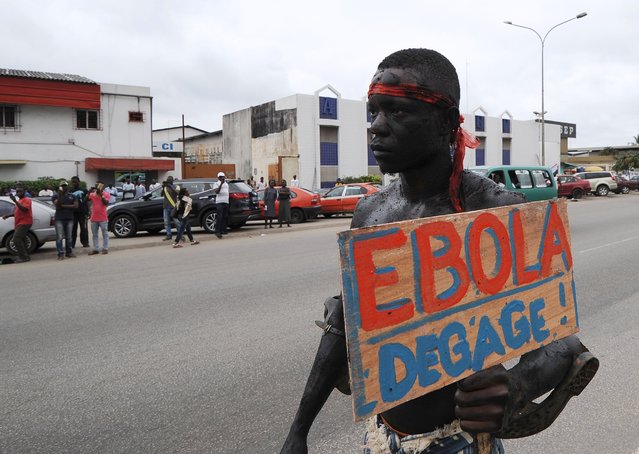 A man holds a placard reading “Ebola, go away!” as members of the artist group “'Be Kok Spirit” march to raise awareness on the Ebola virus, on August 19, 2014 in Abidjian. The Ivory Coast announced on August 11 that it has banned all flights from countries hit by Ebola as part of steps to prevent the deadly virus from reaching the west African nation. (Photo by Sia Kambou/AFP Photo) 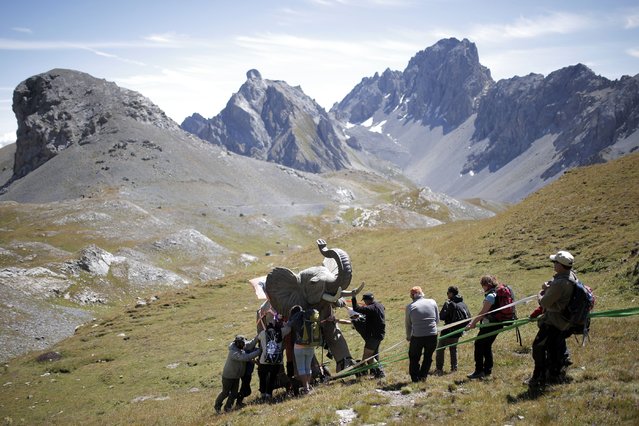 Volunteers use ropes to push an elephant, a 200kg-replica of one of Hannibal's elephant, by French artist Luc Dubost, on the Cavalla Pass, in the Maira Valley, near Cuneo and the French border, on August 21, 2014, as part of an artistic project called “Not for highway use”. The artist and a team of volunteers started to carry the elephant from Larche in France on August 15, 2014 in a bid to “create a kind of a poetic remake of the strategic achievement of Hannibal”. (Photo by Marco Bertorello/AFP Photo) 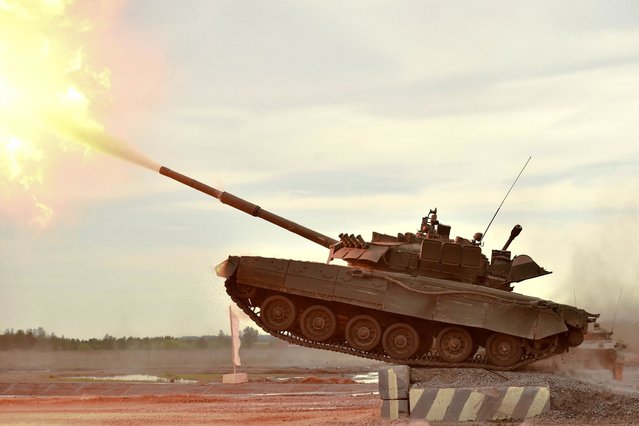 A Russian tank takes part in a military show during the military exhibition “Oboronexpo-2014” in Zhukovsky outside Moscow, on August 17, 2014. (Photo by Kirill Kudryavtsev/AFP Photo) 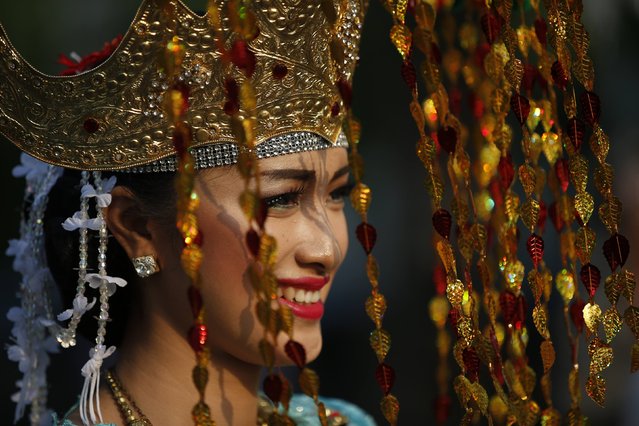 An Indonesian dancer smiles while waiting for the start of a cultural parade marking the country's 69th Independence Day celebration in Jakarta August 18, 2014. (Photo by Darren Whiteside/Reuters) 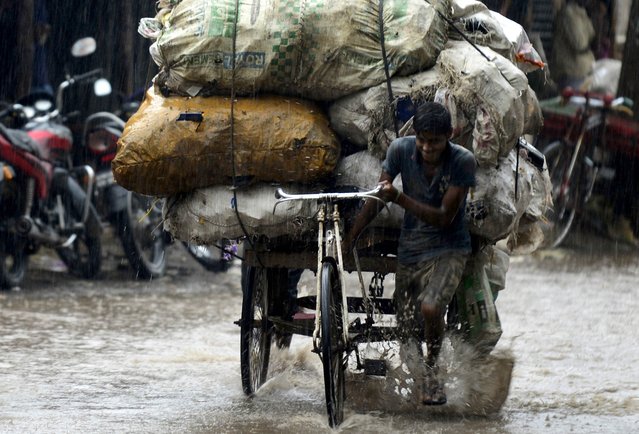 A Bangladeshi rickshaw puller makes his way through the rain in Dhaka on August 19, 2014. Seven rivers in Bangladesh are flowing above the danger mark after heavy rains. (Photo by Munir Uz Zaman/AFP Photo) 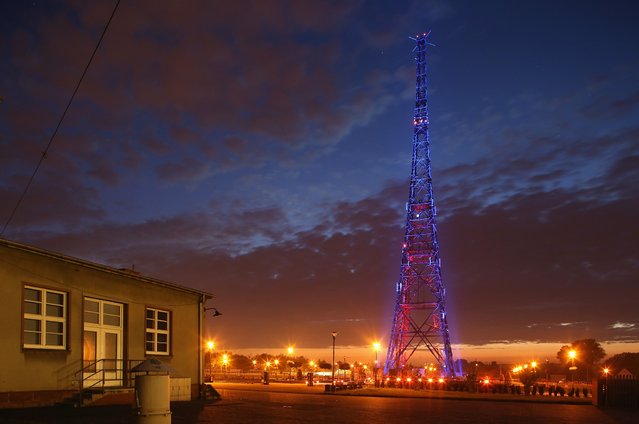 The former radio station tower that became famous through the “Gleiwitz Incident” stands illuminated on August 19, 2014 in Gliwice, Poland. On August 31, 1939, German soldiers speaking Polish and pretending to be Silesian separatists stormed the Sender Gleiwitz radio broadcast facility in Gleiwitz, which was at the time part of Germany and close to the border with Poland, in the most famous of a series of incidents contrived by the Nazis in order to win public support for their invasion of Poland. Germany launched its invasion of Poland a day later, propelling Europe and the world into World War II. Germany and Poland will mark the 75th anniversary of the outbreak of the war with a series of commemorative events. Today the former radio tower, which at 111 meters is the tallest wooden structure in Europe, stands in a public park and the radio station building is a small museum. (Photo by Sean Gallup/Getty Images) 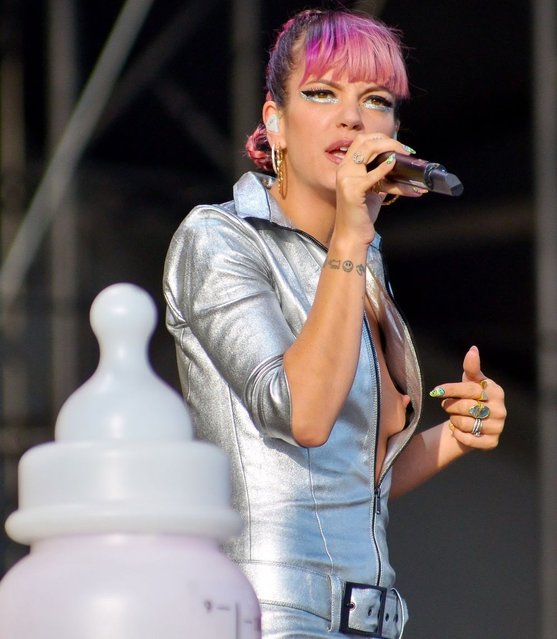 Lily Allen performs on the Virgin Media stage during Day 2 of the V Festival at Hylands Park on August 17, 2014 in Chelmsford, England. (Photo by Ian Gavan/Getty Images) 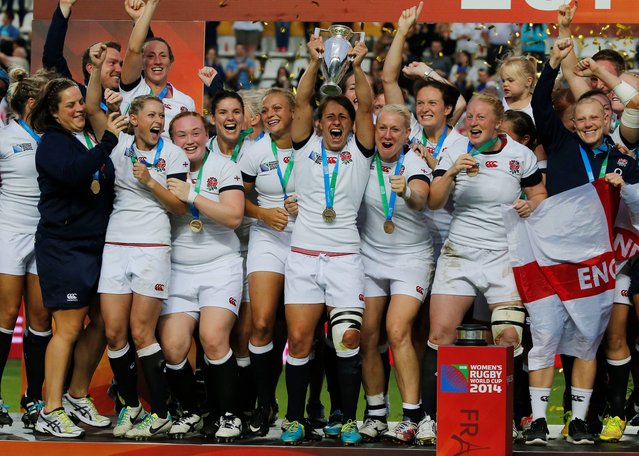 England's captain Katy McLean, holds the trophy as she celebrates with her teammates, after defeating Canada 21-9, during the final match of the Women's Rugby World Cup 2014, at Jean Bouin stadium, in Paris, Sunday, August 17, 2014. (Photo by Michel Euler/AP Photo) 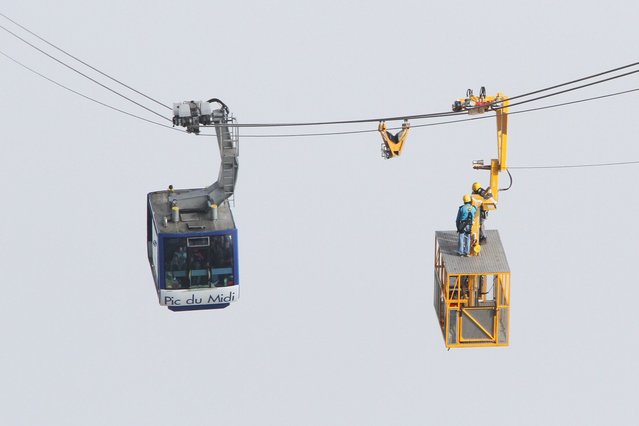 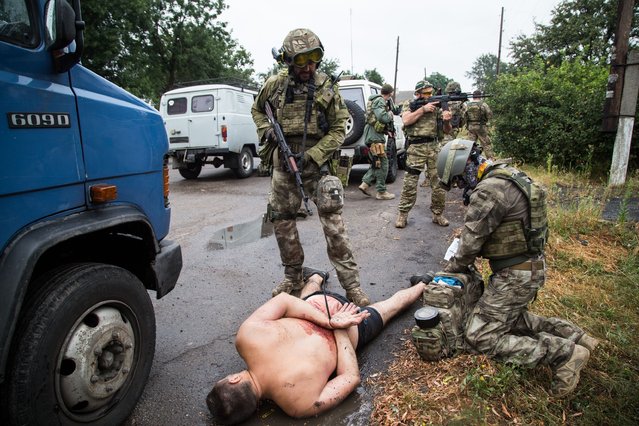 Armed Ukrainian forces detain a pro-Russian militant in the village of Chornukhine in the Lugansk region on August 18, 2014. A Ukrainian warplane was blown out of the sky over rebel-held territory as fierce clashes between government troops and pro-Russian insurgents left dozens of civilians dead. At least 415,800 people have fled their homes due to fighting between government forces and pro-Russian separatists in eastern Ukraine, the UN refugee agency said on August 20. (Photo by Oleksandr Ratushniak/AFP Photo) 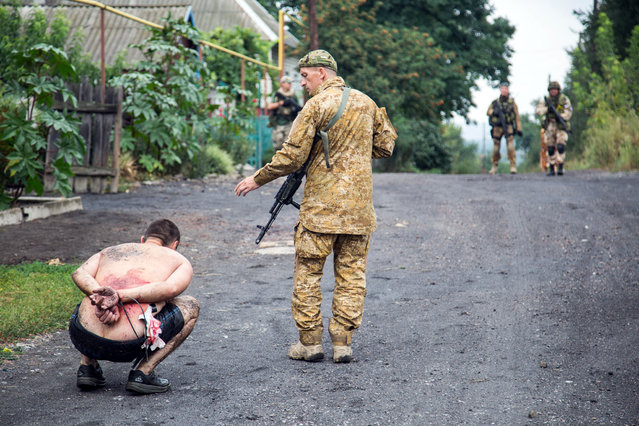 Armed Ukrainian forces detain a pro-Russian militant in the village of Chornukhine in the Lugansk region on August 18, 2014. A Ukrainian warplane was blown out of the sky over rebel-held territory as fierce clashes between government troops and pro-Russian insurgents left dozens of civilians dead. (Photo by Oleksandr Ratushniak/AFP Photo) 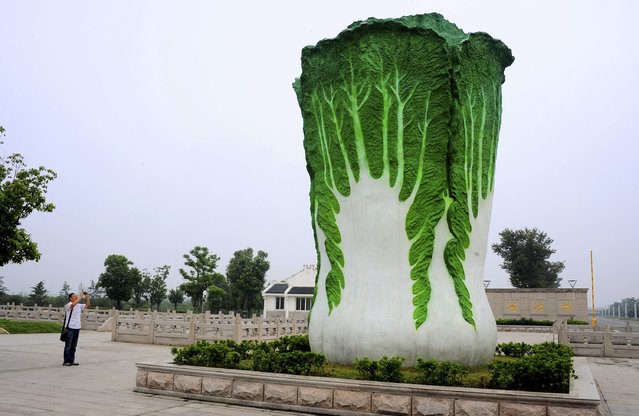 A man takes pictures of a sculpture of a Chinese cabbage outside an ecological agriculture company in Suzhou, Jiangsu province, August 16, 2014. (Photo by Reuters/Stringer) 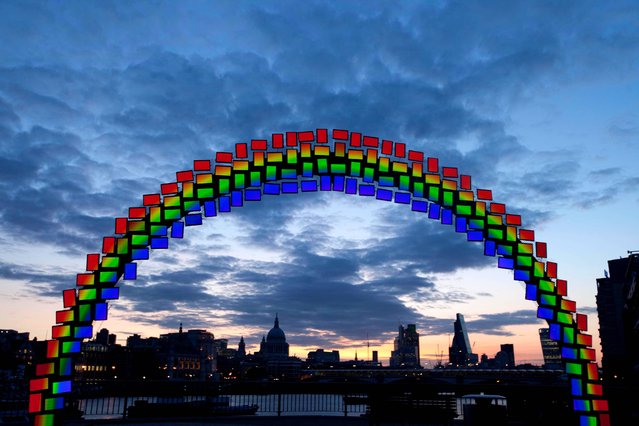 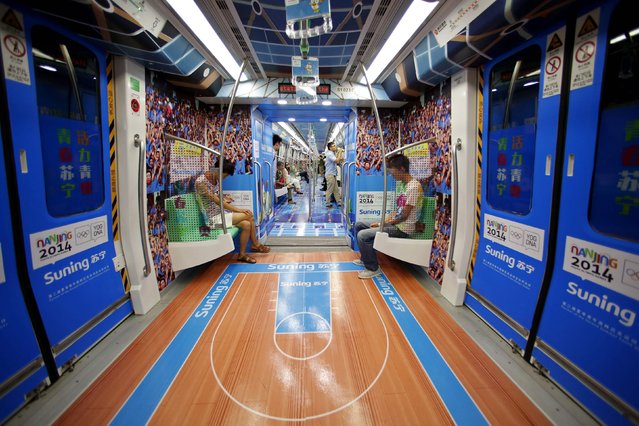 Passengers sit in the carriage of a subway train with floors decorated to resemble a basketball court to celebrate the ongoing 2014 Nanjing Youth Olympic Games in Nanjing, Jiangsu province, August 19, 2014. (Photo by Aly Song/Reuters) 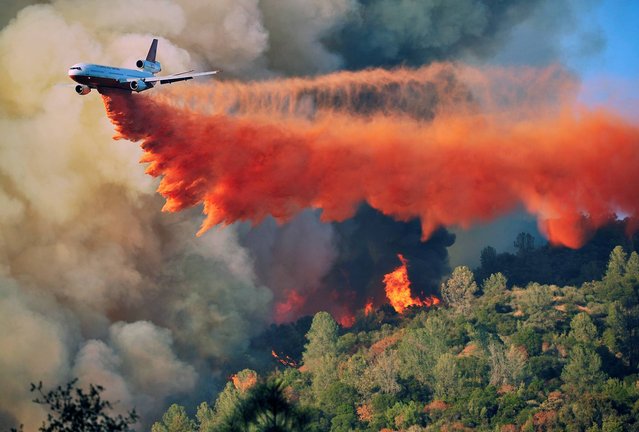