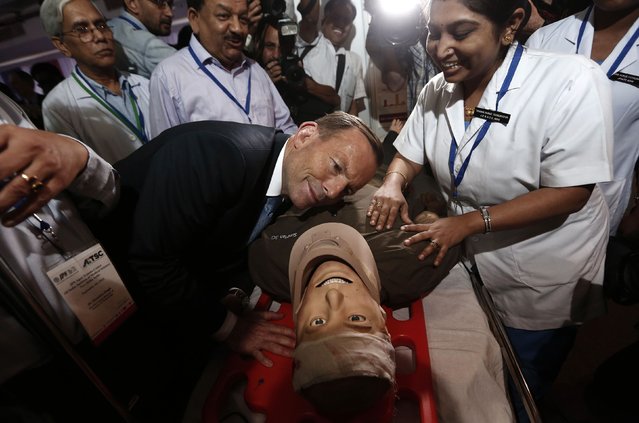 Australia's Prime Minister Tony Abbott (C) takes part in a presentation with a patient simulator during his visit to the trauma centre of the All India Institutes of Medical Sciences (AIIMS) in New Delhi September 5, 2014. Abbott said he would seal a civil nuclear deal to sell uranium to India on Friday, offering to ramp up supplies of energy to help the emerging Asian giant overcome chronic shortages. (Photo by Adnan Abidi/Reuters) 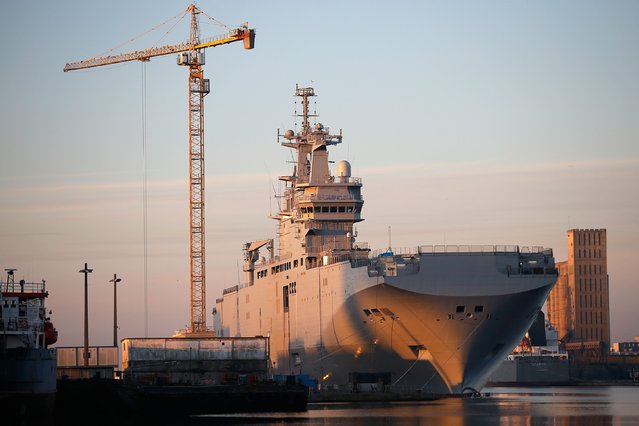 The Mistral-class helicopter carrier Vladivostok is seen at the STX Les Chantiers de l'Atlantique shipyard site in Saint-Nazaire, September 4, 2014. France will not deliver the first of two helicopter carriers to Russia for now because of Moscow's actions in eastern Ukraine, the French president's office said on Wednesday. (Photo by Stephane Mahe/Reuters) 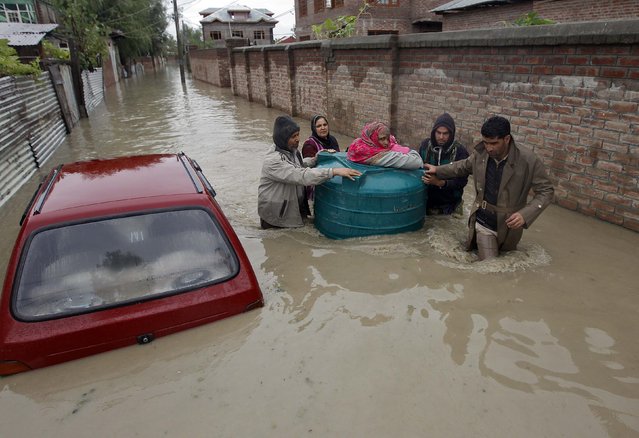 People transport a sick woman in an empty water tank on a flooded street during rain in Srinagar September 5, 2014. Sixty-five people were killed after heavy rains caused flash floods in Indian-administered Kashmir, including a wedding party on a bus that was swept away, officials said on Thursday. Authorities declared a disaster alert in the northern region after two days of heavy rain hit villages across the Kashmir valley, causing the worst flooding in two decades. (Photo by Danish Ismail/Reuters) 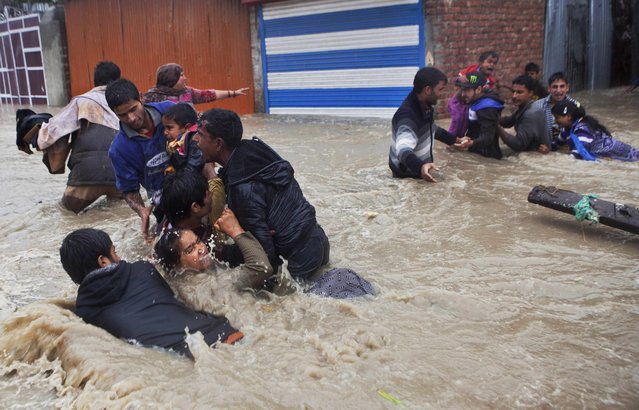 Kashmiri residents struggle to withstand sudden and strong water currents while wading through floodwaters in their efforts to move to safer places in Srinagar, India, Thursday, September 4, 2014. At least 100 villages across the Kashmir valley were flooded by overflowing lakes and rivers, in the worst flooding in 22 years caused by heavy rains. (Photo by Dar Yasin/AP Photo) 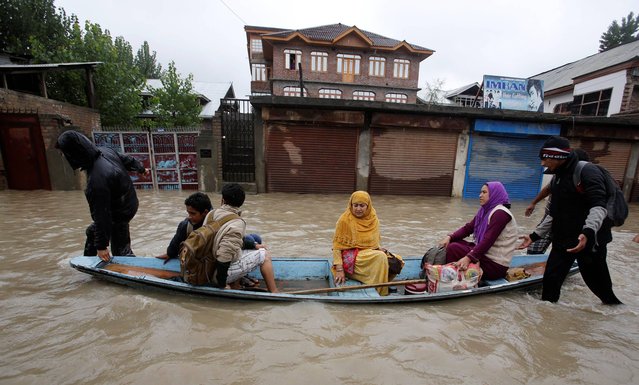 Residents leave a flooded neighborhood on a boat in Srinagar, India, Thursday, September 4, 2014. Authorities say heavy rains have triggered floods and landslides in the Indian portion of Kashmir, killing at least 14 people in the worst flooding in 22 years. (Photo by Mukhtar Khan/AP Photo) 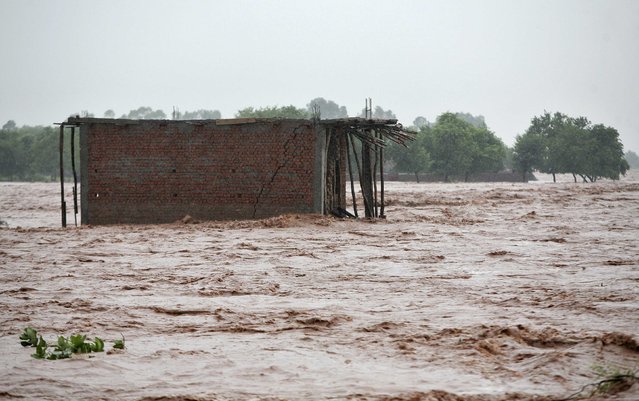 A house under construction is surrounded by the flooded banks of river Tawi after heavy rains in Jammu September 5, 2014. (Photo by Mukesh Gupta/Reuters) 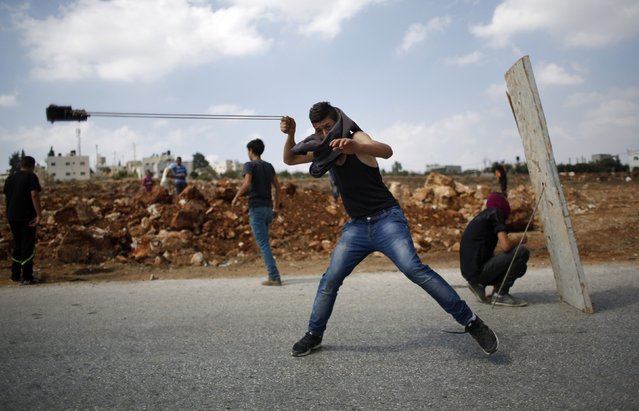 A Palestinian protester uses a sling shot to hurl a stone at Israeli troops during clashes at a weekly protest against Jewish settlements, in the West Bank village of Nabi Saleh, near Ramallah, September 5, 2014. (Photo by Mohamad Torokman/Reuters) 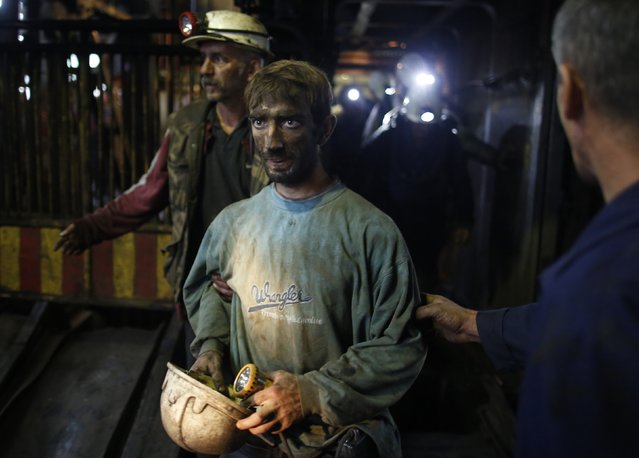 Trapped coal miners leave after they were rescued at the Raspotocje coal mine in Zenica September 5, 2014. Five Bosnian miners were confirmed dead on Friday, a day after an earthquake triggered a collapse at the mine, as emergency teams helped 29 others to the surface. (Photo by Dado Ruvic/Reuters) 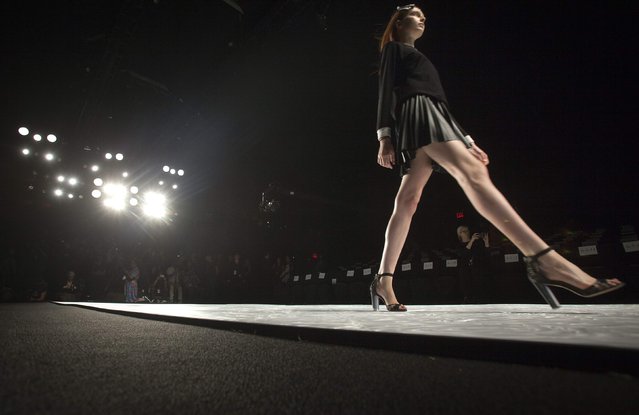 A model does a practice run before the Monique Lhuillier Spring/Summer 2015 runway show during New York Fashion Week in the Manhattan borough of New York September 5, 2014. (Photo by Carlo Allegri/Reuters) Emma Sulkowicz, a senior visual arts student at Columbia University, carries a mattress in protest of the university's lack of action after she reported being raped during her sophomore year, on September 5, 2014. Sulkowicz has said she is committed to carrying the mattress everywhere she goes until the university expels the rapist or he leaves. The protest is also doubling as her senior thesis project. (Photo by Andrew Burton/Getty Images) 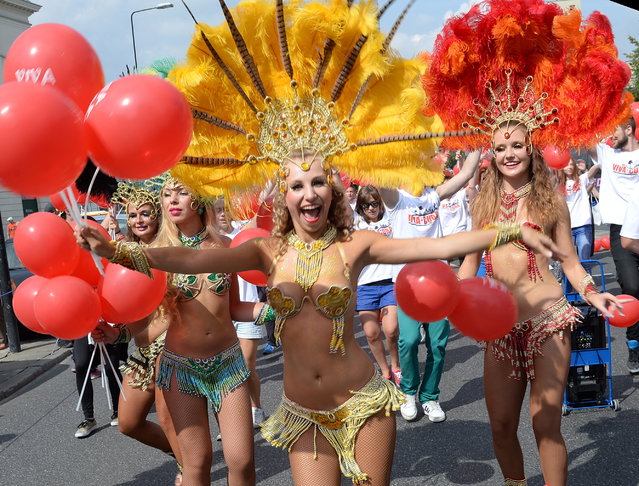 Participants perform a dance as they take part in a parade during the 8th Multicultural Warsaw Street Party in Warsaw, Poland, August 31, 2014. The festival includes art exhibitions, workshops, film screenings and concerts presenting cultures of ethnic and national minorities, and societies of immigrants who live in Warsaw. (Photo by Jacek Turczyk/EPA) 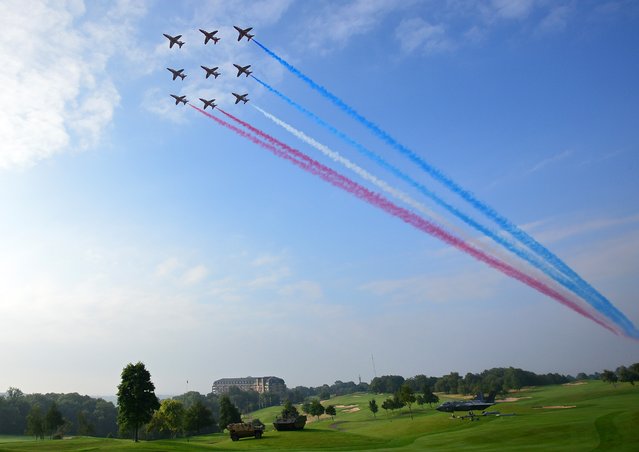 Britain's Red Arrows airplane display team perform a flypast over the NATO 2014 Summit at the Celtic Manor Hotel in Newport, South Wales, on September 5, 2014. NATO leaders are expected to announce a raft of fresh sanctions against Russia on Friday over its actions in Ukraine, although hopes remain that a ceasefire can be forged at peace talks in Minsk on the same day. (Photo by Carl Court/AFP Photo) 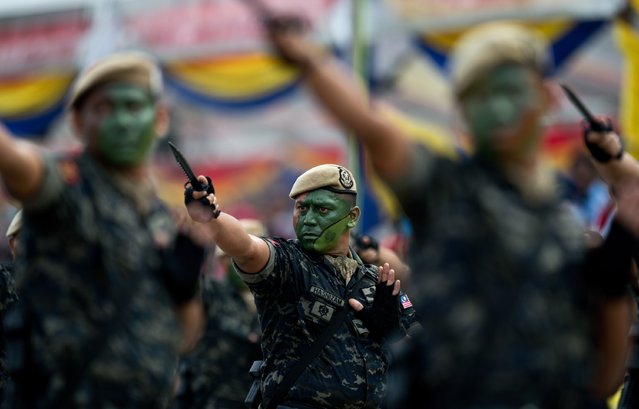 Malaysia's military personnel perform during the 57th National Day celebrations at Independence Square in Kuala Lumpur on August 31, 2014. Malaysia celebrated its 57th National Day to commemorate the independence of the Federation of Malaya from British rule in 1957. (Photo by Manan Vatsyayana/AFP Photo) 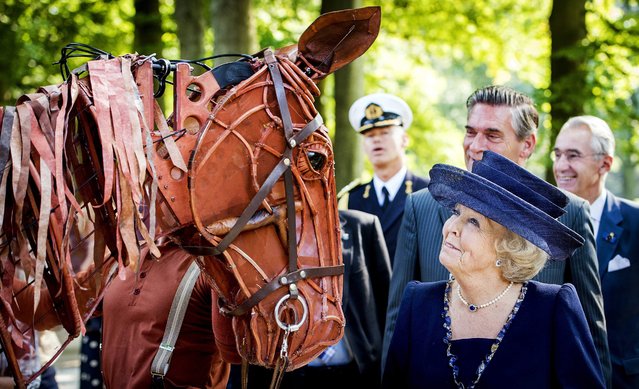 Dutch Princess Beatrix meets the horse sculpture from the musical 'War Horse' after she opened new permanent exhibition about The Netherlands and World War One in Huis Doorn, in Doorn, The Netherlands, 04 September 2014. Huis Doorn was the post-war asylum of German Emperor Wilhelm II in The Netherlands. (Photo by Koen van Weel/EPA) 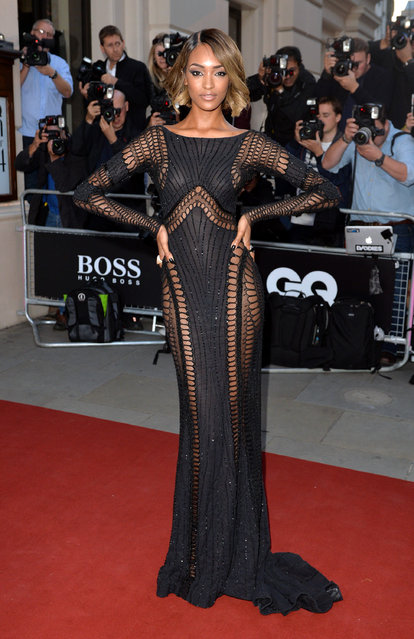 Jourdan Dunn attends the GQ Men of the Year awards at The Royal Opera House on September 2, 2014 in London, England. (Photo by Anthony Harvey/Getty Images) 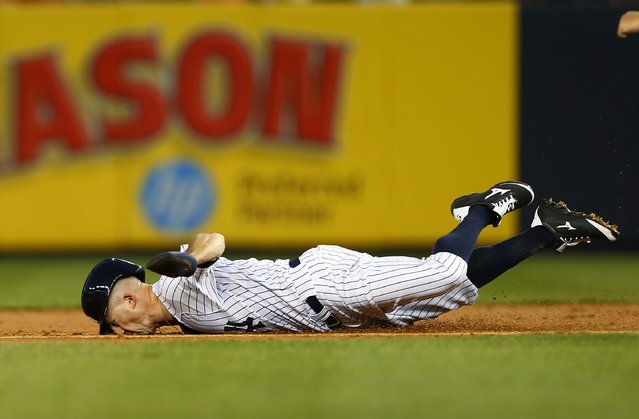 Brett Gardner #11of the New York Yankees dives into second base on the back end of an attempted double during the first inning in a MLB baseball game at Yankee Stadium on September 3, 2014 in the Bronx borough of New York City. Gardner was tagged out on the play. (Photo by Rich Schultz/Getty Images) 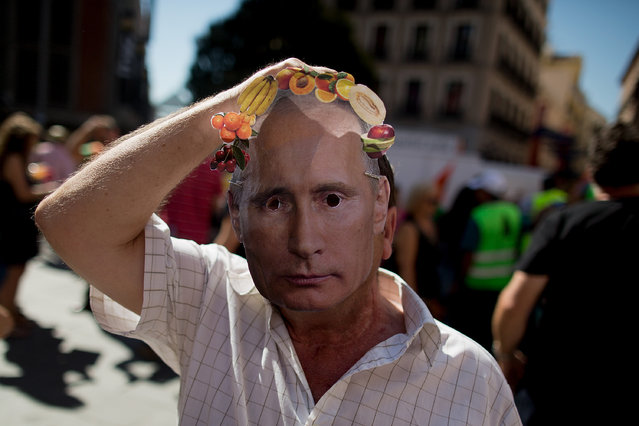 A man puts on a mask depicting Russian President Vladimir Putin wearing a fruit crown during a protest against the Russian food ban giving food away at Plaza Callao on September 5, 2014 in Madrid, Spain. Spanish farmers give away 10 tonnes of fruits to members of the public in Madrid in protest against Russia's ban on EU food imports and to promote the consumption of home grown produce. (Photo by Pablo Blazquez Dominguez/Getty Images) 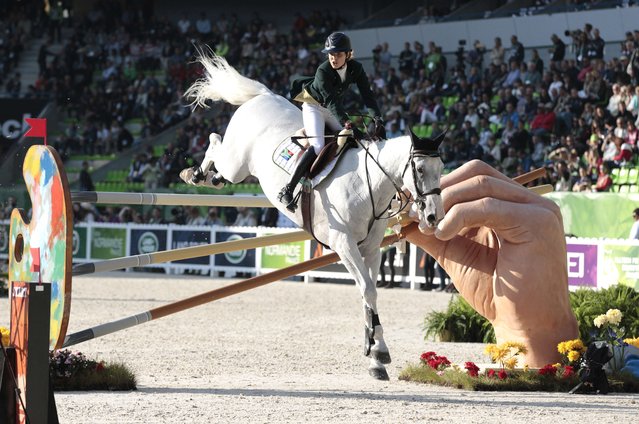 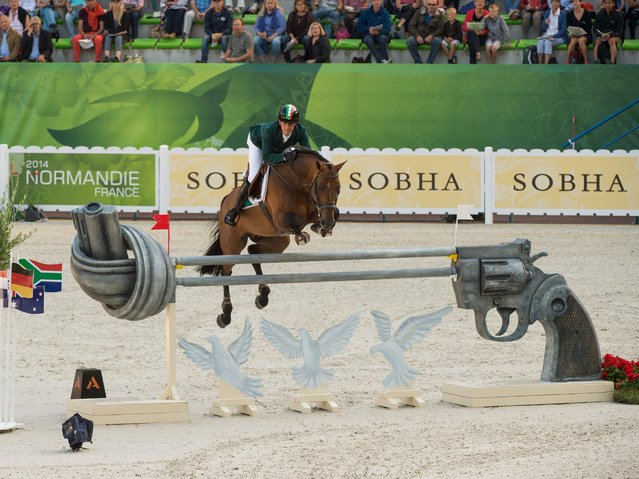 Darragh Kenny on Imothep competing during the first round of the team competiton. 2014 Alltech FEI World Equestrian Games, Caen, France, on September 3, 2014. (Photo by Ray McManus/SPORTSFILE) 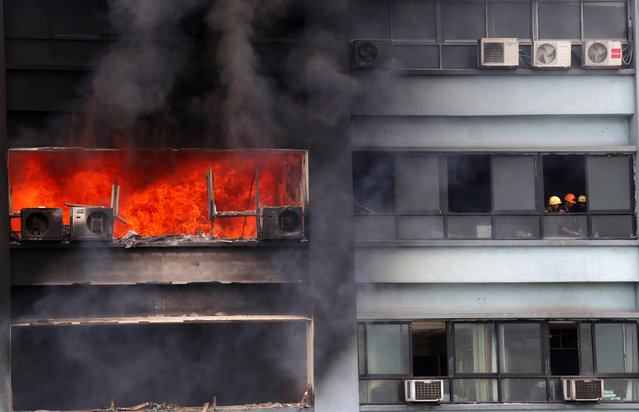 Firefighters battle to extinguish a large fire on 12th floor of the Chatterjee International Centre building in Calcutta, India, September 2, 2014. Reportedly the fire originally started on the 12th floor and slowly extended to other floors. At least twelve fire engines reached the spot and at least four persons were evacuated but noboby was injured. (Photo by Piyal Adhikary/EPA) 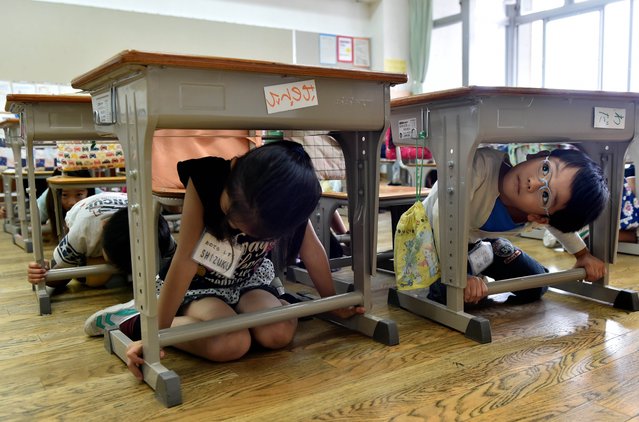 Elementary school children take cover under their desks during an earthquake drill at a school in Tokyo on September 1, 2014. Nationwide anti-disaster drills were held on September 1 on the anniversary of the massive 1923 earthquake which killed more than 140,000 people in the Tokyo metropolitan area. (Photo by Yoshikazu Tsuno/AFP Photo) 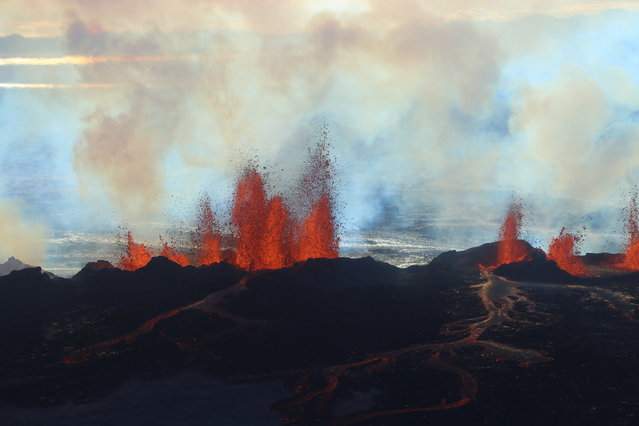 In this aerial view, fountains of lava, up to 60 meters high, spurt from a fissure in the ground on the north side of the Bardarbunga volcano in Iceland, Tuesday, September 2, 2014. The alert warning for the area surrounding Iceland's Bardarbunga volcano remained at orange on Tuesday, indicating that it is showing increased unrest with greater potential for an explosive eruption. (Photo by Stefano Di Nicolo/AP Photo) 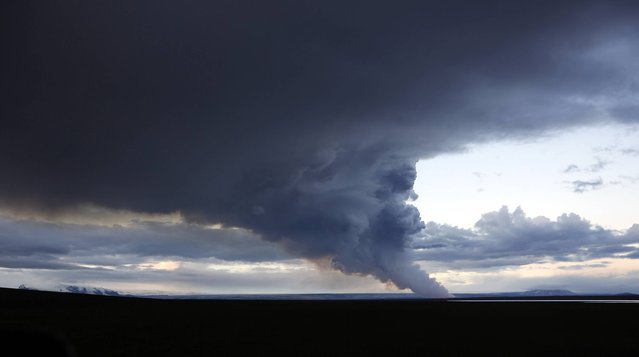 A plume of smoke rises from the lava eruption on Holuhraun, northwest of the Dyngjujoekull glacier in Iceland, Monday, September 1, 2014. Lava fountains danced along a lengthy volcanic fissure near Iceland's subglacial Bardarbunga volcano Sunday, prompting authorities to raise the aviation warning code to the highest level and close the surrounding airspace. The warning was lowered 12 hours later as visibility improved and it was clear that no volcanic ash was detected. (Photo by Eggert Johannesson/AP Photo) 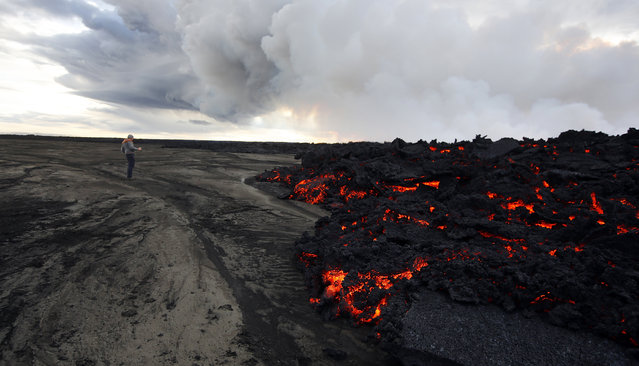 A man stands near to a lava eruption on Holuhraun, northwest of the Dyngjujoekull glacier in Iceland, Monday, September 1, 2014. (Photo by Eggert Johannesson/AP Photo) 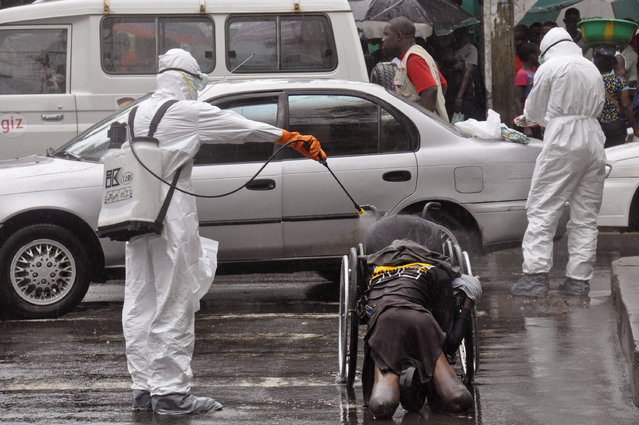 Health workers spray the body of a amputee suspected of dying from the Ebola virus with disinfectant, in a busy street in Monrovia, Liberia, Tuesday, September 2, 2014. Food in countries hit by Ebola is getting more expensive and will become scarcer because many farmers won't be able to access fields, a U.N. food agency warned Tuesday. An Ebola outbreak in West Africa has killed more than 1,500 people, and authorities have cordoned off entire towns in an effort to halt the virus' spread. (Photo by Abbas Dulleh/AP Photo) 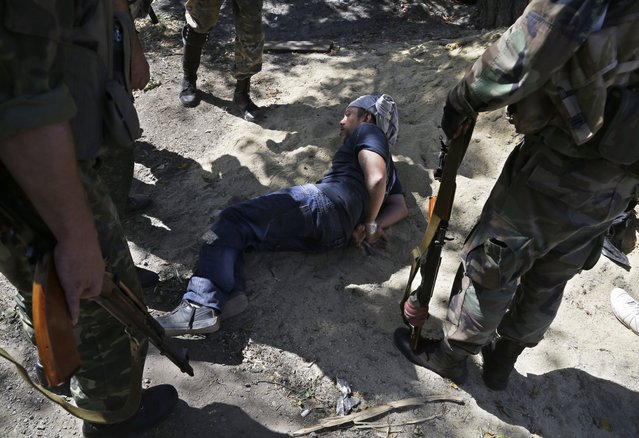 A detainee held by Pro-Russian rebels lays bound meters away from a column of destroyed Ukranian military vehicles in the village of Novokaterynivka, eastern Ukraine, Tuesday, September 2, 2014. Ukrainian troops have over the past week suffered a string of major military losses in their offensive against Russian-backed separatist rebels, losing large swathes of territory and having hundreds of soldiers captured. (Photo by Sergei Grits/AP Photo) 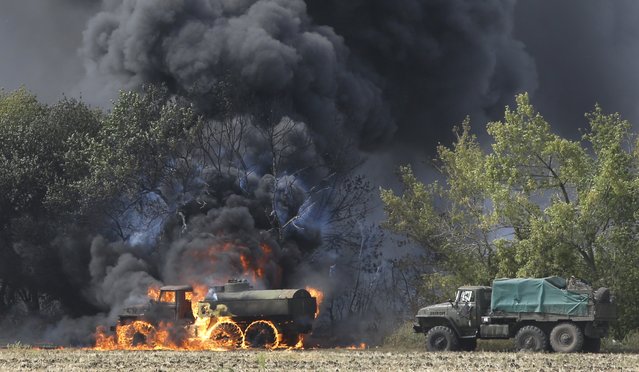 An unmarked military vehicle burns on a country road in the village of Berezove, eastern Ukraine, Thursday, September 4, 2014, after a clash between pro-government troops and Russian-backed separatist militia. Separatist rebels have made major strides in their offensive against Ukrainian government forces in recent days, drawing on what Ukraine and NATO says is ample support from the Russian military. (Photo by Sergei Grits/AP Photo) 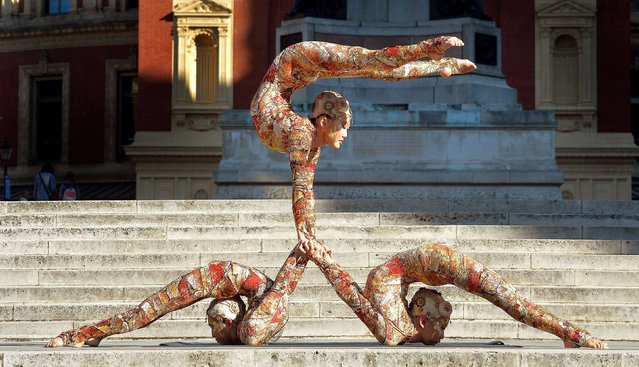 A trio of Mongolian contortionists from the Cirque du Soleil show Kooza show off their special skills on September 2, 2014, in front of the Royal Albert hall where the production will return for its annual limited run at the London venue from January 6, 2015. (Photo by John Stillwell/PA Wire) 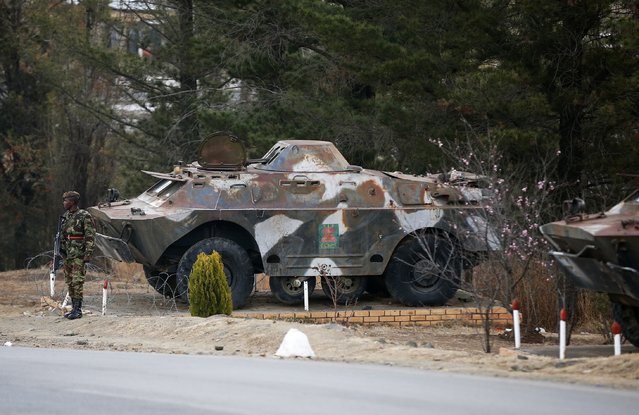 A member of the Lesotho military stands guard in front of an armed personnel carrier at the entrance of the army barracks in Maseru August 30 2014. Lesotho's Prime Minister Thomas Thabane on Saturday accused his country's army of staging a coup against him and fled to neighbouring South Africa, which condemned the military's action and called for a peaceful settlement. Early morning gunfire was heard in Maseru, capital of the small southern African kingdom encircled by South Africa. Army units occupied police headquarters and surrounded the prime minister's residence, residents and diplomats said. (Photo by Siphiwe Sibeko/Reuters)
Edit Del
06 Sep 2014 11:53:00, post received 0 comments
Publication archive:
←   →
Popular tags:
All tags
Last searches: