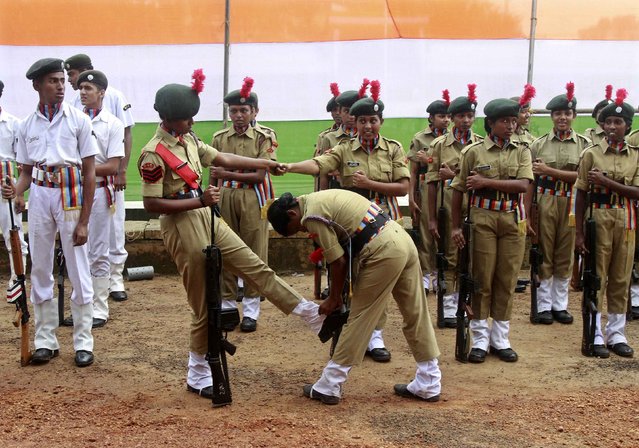 A female National Cadet Corps (NCC) cadet helps her comrade fix her boots before the start of the Independence Day parade as it rains in the southern Indian city of Kochi August 15, 2014. Indian Prime Minister Narendra Modi voiced dismay on Friday at the government in-fighting he found on assuming office in May and vowed to fire up the bureaucracy to deliver results in a country desperately in need of growth and development. (Photo by Sivaram V/Reuters) 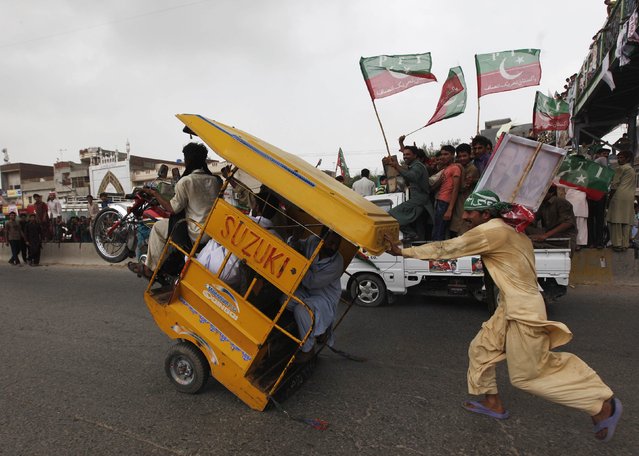 A supporter (R) of cricketer-turned-opposition politician Imran Khan runs to catch an overladen rickshaw, which had its front off the ground, to join others in the Freedom March in Gujrat August 15, 2014. Thousands of protesters began to march on the Pakistani capital from the eastern city of Lahore on Thursday, buoyed by a last-minute court order that a peaceful march could go ahead and a government promise to obey the ruling. (Photo by Akhtar Soomro/Reuters) 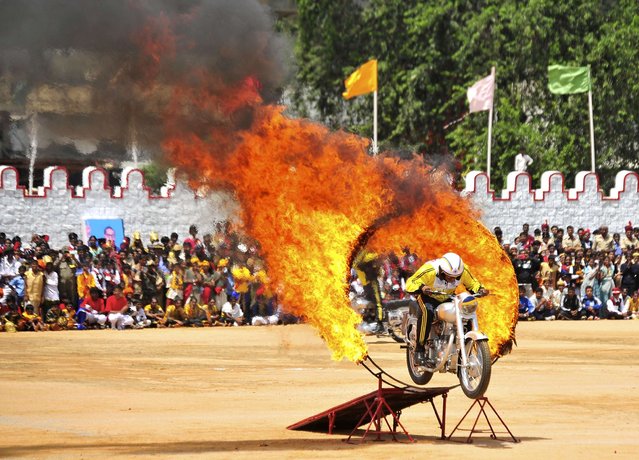 An Indian army soldier performs a stunt on his motorcycle during India's Independence Day celebrations in the southern Indian city of Bangalore August 15, 2014. (Photo by Abhishek N. Chinnappa/Reuters) 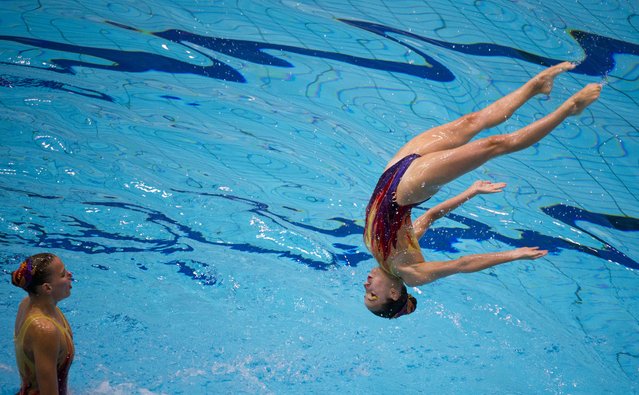 Switzerland's team performs their free routine in the synchronised swimming event at the 32nd LEN European swimming championships on August 14, 2014 at the Europa-Sportpark in Berlin. (Photo by John Macdougall/AFP Photo) 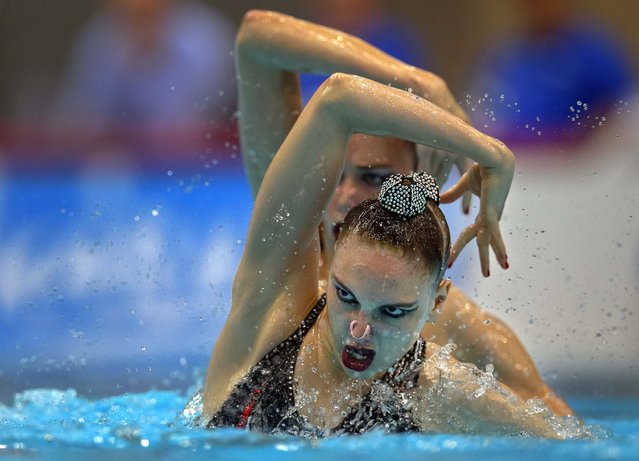 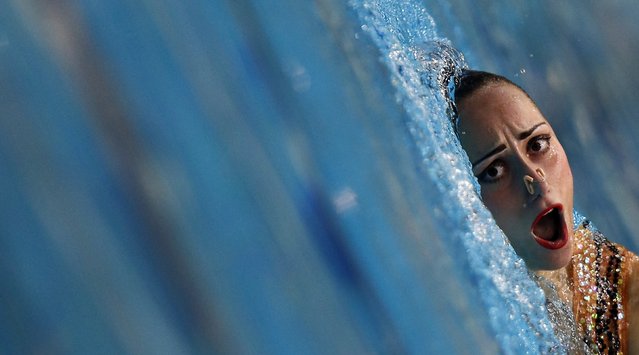 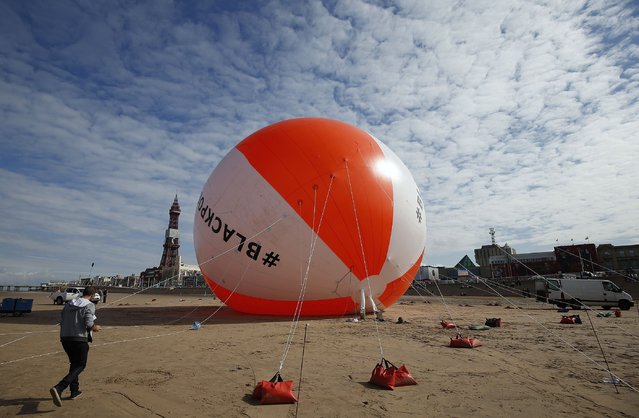 A giant inflated beach ball sits on the sand at Blackpool Beach in Blackpool, northern England August 15, 2014. The ball was inflated to a height of 16.6 meters on Friday, beating the previous world record of 15.8 meters. (Photo by Andrew Yates/Reuters) 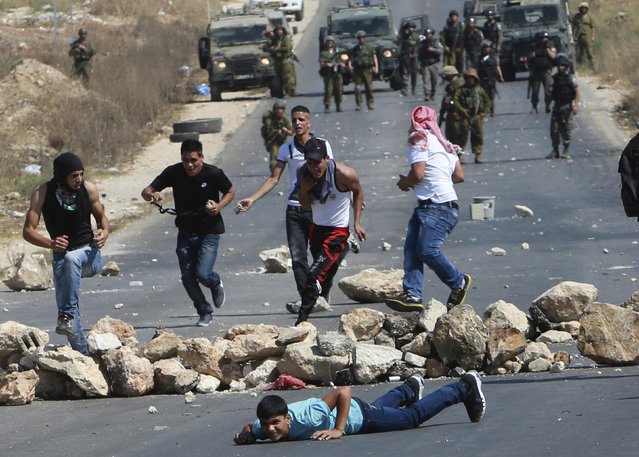 Palestinian protesters run for cover as Israeli soldiers fire rubber bullets during clashes following a demonstration against Israeli military action in Gaza, at the Beit Fourik checkpoint near the West Bank city of Nablus August 15, 2014. (Photo by Abed Omar Qusini/Reuters) 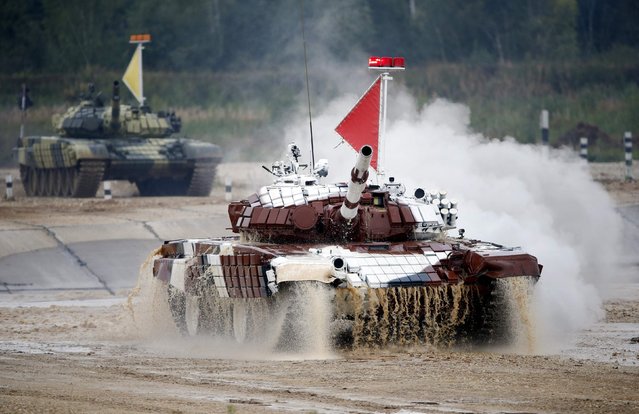 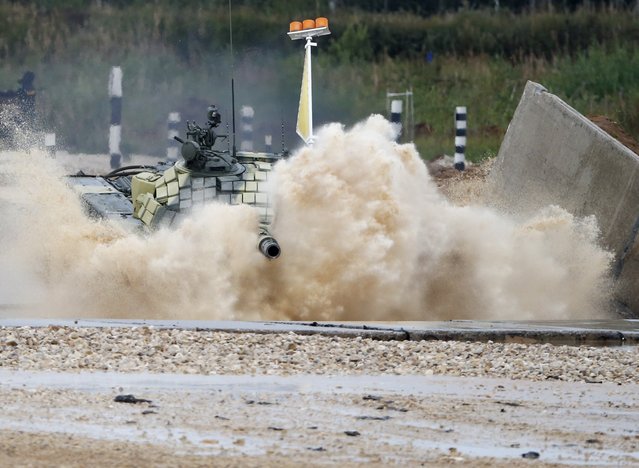 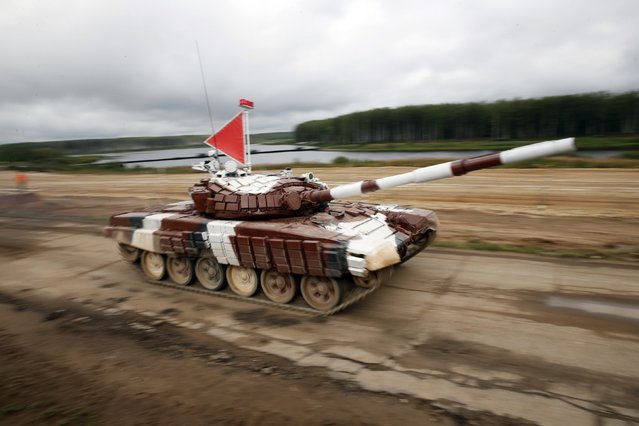 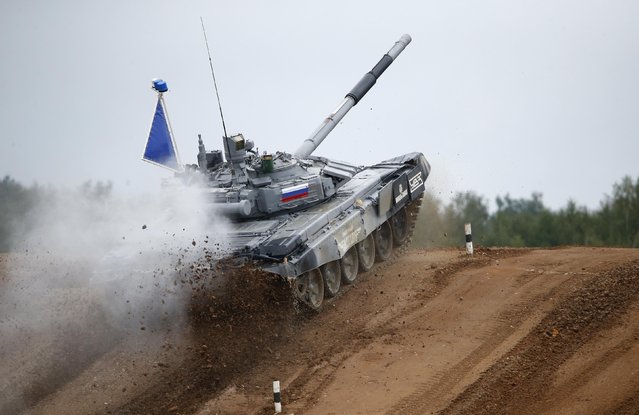 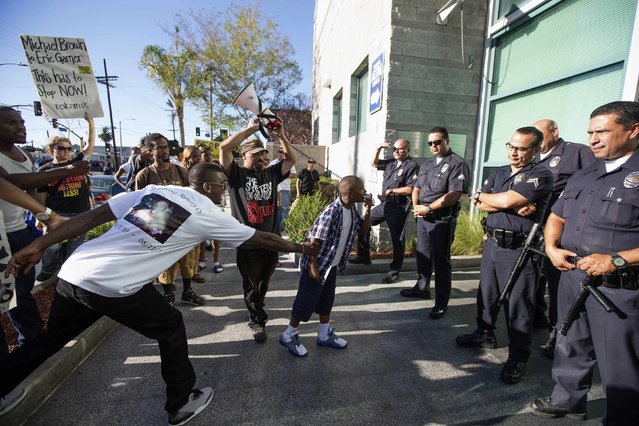 People protest the fatal police shooting of Ezell Ford, who died during an August 11, 2014 confrontation with police in South Los Angeles, at a rally outside the Newton area police station in Los Angeles, California August 15, 2014. Police are investigating the shooting death of an unarmed black man by an officer during an “investigative stop” that led to a struggle, a police spokeswoman said on Wednesday. Police said they were not immediately identifying the deceased man, but a woman who said she was his mother told local broadcaster KTLA his name was Ezell Ford, 25. (Photo by Lucy Nicholson/Reuters) 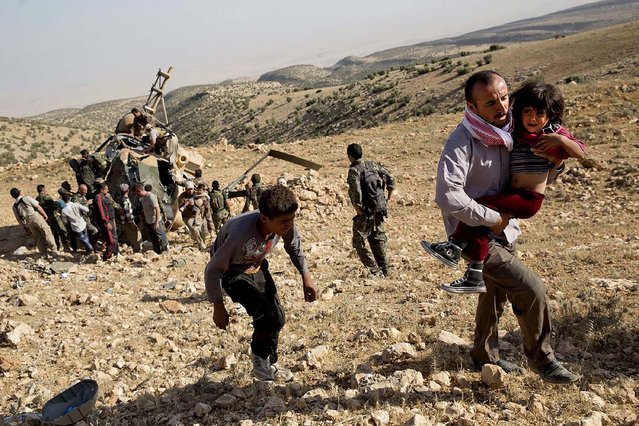 A child is carried away from the crash of an Iraqi military helicopter that was delivering supplies to Yezidis still trapped in Iraq's Sinjar mountains, on August 12, 2014. The Kurdish pesh merga pilot died in the crash, but others aboard were picked up later by other rescue helicopters. (Photo by Adam Ferguson/The New York Times) 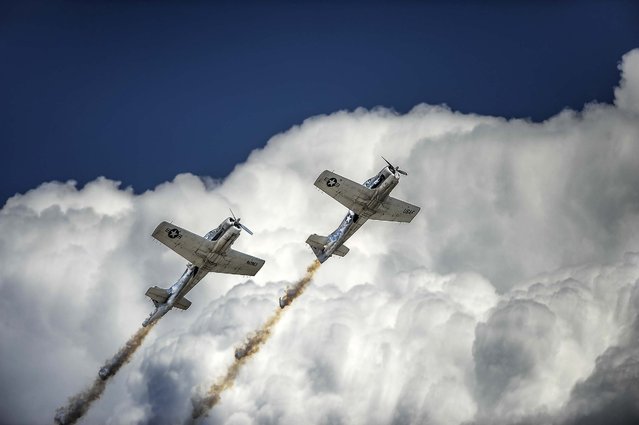 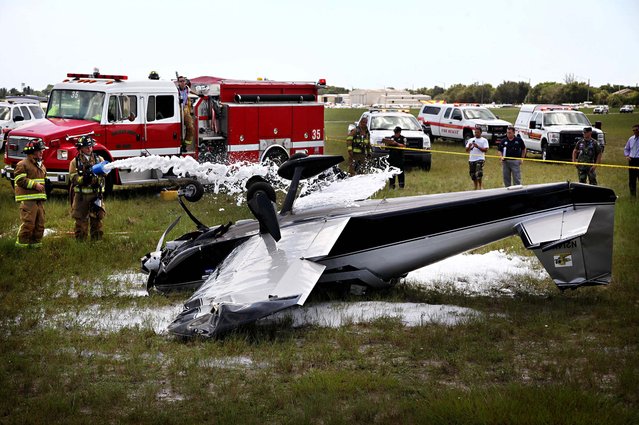 Palm Beach County Fire Rescue workers pour foam on a single engine plane that flipped on the southwest corner of Lantana Airport property, on August 10, 2014. One man on the scene was injured severely enough to qualify for a trauma alert and was rushed to Delray Medical Center. (Photo by Richard Graulich/The Palm Beach Post) 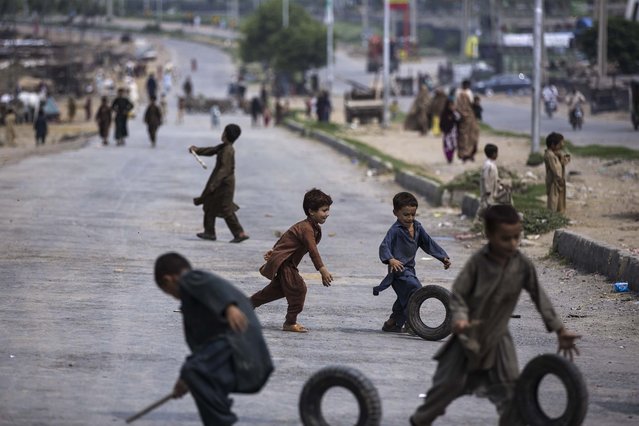 Children play with tyres in a main road which is empty of traffic, after being blocked by the Pakistani police with shipping containers, on the outskirts of Islamabad, Pakistan, Thursday, August 14, 2014. Roads leading to the Capital are being blocked in run up to announced protests by cricketer-turned-politician Imran Khan and anti-government cleric Tahir-ul-Qadri. Both men want the government to step down and new elections to be held. (Photo by Muhammed Muheisen/AP Photo) 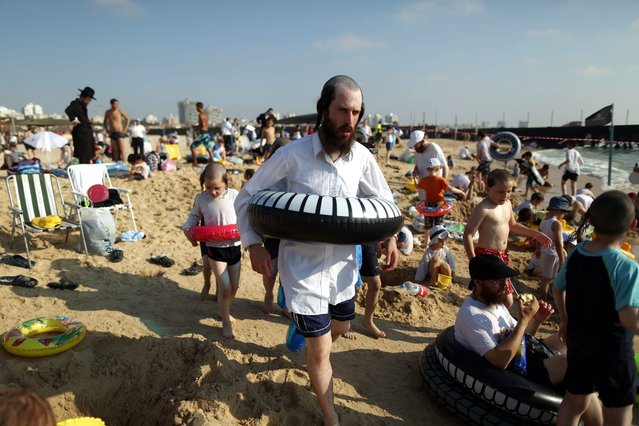 Ultra Orthodox Jews enjoying summer time at the beach with their families in the southern city of Ashdod, Israel, on 13 August 2014. Many Israelis are making the most of the 72-hour truce ceasefire and try to return to normal life. (Photo by Abir Sultan/EPA) 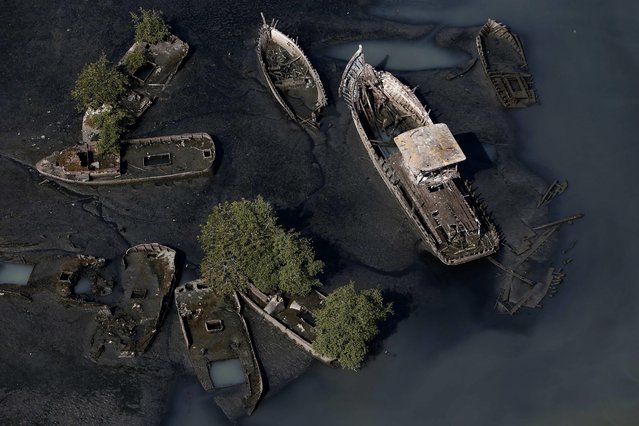 An aereal view of Niteroi area at the Guanabara bay, which surrounds the north and south part of Rio de Janeiro, Brazil, 11 August 2014. This area, which is suffering high levels of contamitation due to spilled sewage and sedimentation process, will host sailing competitions at the 2016 Olympic Games. (Photo by Marcelo Sayao/EPA) 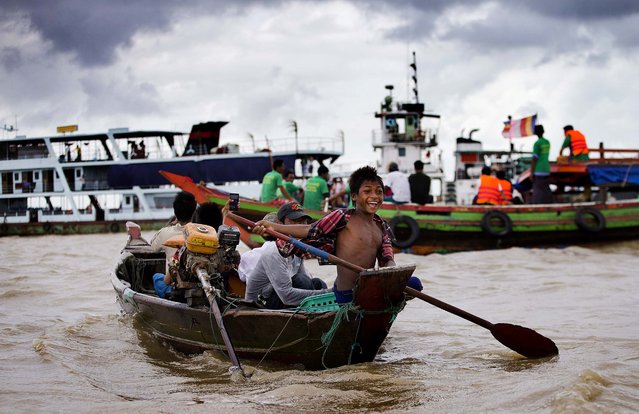 A boy peddles a boat with passengers who came to see the recovery efforts of an ancient bell in a river in Yangon, Myanmar, on August 15, 2014. Divers attached to safety ropes have plunged into waters south of Myanmar’s old capital as part of renewed efforts to retrieve a bronze bell that has been lying for centuries at the confluence of three rivers. The 270-ton bell, believed to be one of the largest ever cast, was made on the order of King Dhammazedi in 1476 and donated to the revered Shwedagon pagoda. In the early 1600s, it was stolen by Portuguese despot Philip de Brito, but his rickety vessel sank where the Yangon and Bago rivers meet the Pazundaung creek. (Photo by Gemunu Amarasinghe/AP Photo) 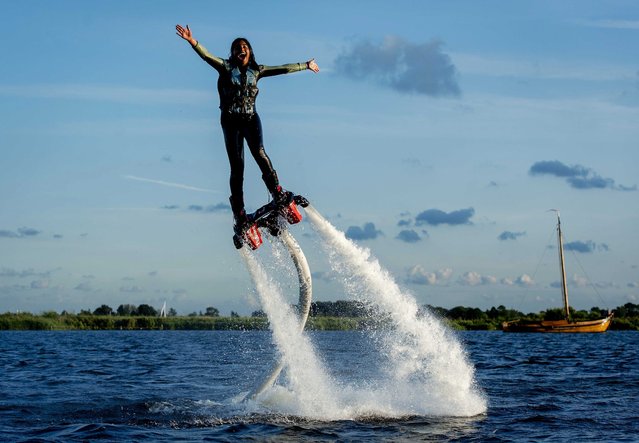 A picture made available on 14 August 2014 shows a girl using a flyboard, a water jet pack which connects to a personal water craft with a hose at the Kaag Lakes, in Kaag, the Netherlands, 13 August 2014. A flyboard rider stands on a board connected by a long hose to a watercraft. Water is forced under pressure to a pair of boots which provide thrust for the rider to fly up in the air. (Photo by Robin van Lonkhuijsen/EPA) 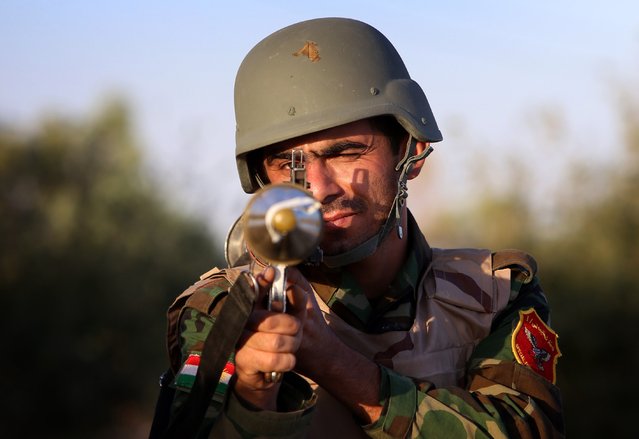 An Iraqi Kurdish Peshmerga fighter poses for a picture on the front line in Makhmur, about 280 kilometres (175 miles) north of the capital Baghdad, during clashes with Islamic State (IS) militants on August 9, 2014. Makhmur, is one of the areas that had been attacked by jihadist fighters in recent days. (Photo by Safin Hamed/AFP Photo) 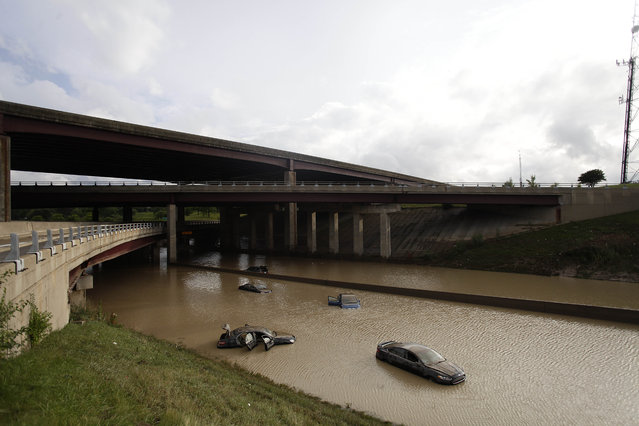 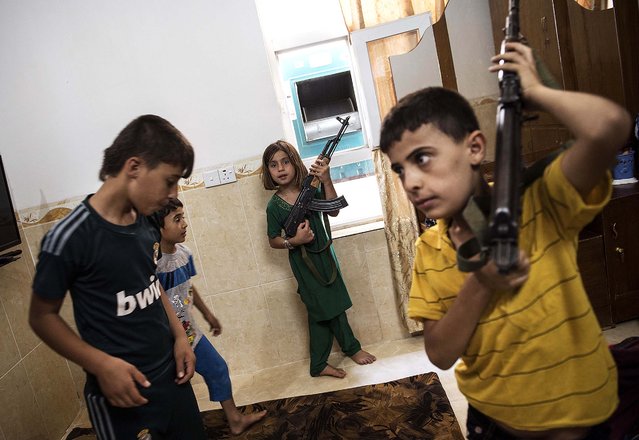 The children of Saman Babita play with the guns and protective gear he has prepared in case fighters with the Islamic State in Iraq and Syria return to Mahmour, Iraq, on August 15, 2014. (Photo by Lynsey Addario/The New York Times) 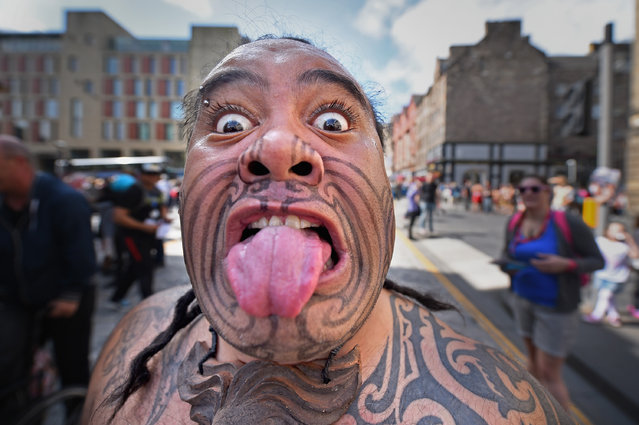 Te Matatini Kapa Haka Aotearoa perform the Haka at the Edinburgh Festival Fringe on the Royal Mile on August 14, 2014 in Edinburgh, Scotland. The largest performing arts festival in the world, this years festival hosts more than 3,000 shows in nearly 300 venues across the city. (Photo by Jeff J. Mitchell/Getty Images) 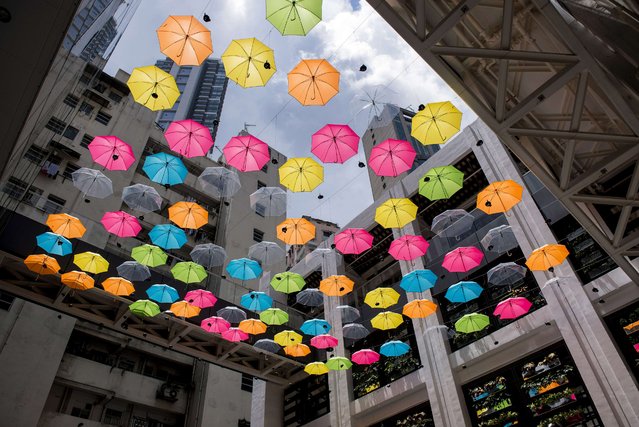 Umbrellas are suspended at the Comix Home Base arts centre in Hong Kong on August 11, 2014. The colourful umbrella canopy was installed to mark the first anniversary of the Comix Home Base, an event space for comic illustrators and animators, and venue for workshops and screenings. (Photo by Alex Ogle/AFP Photo) 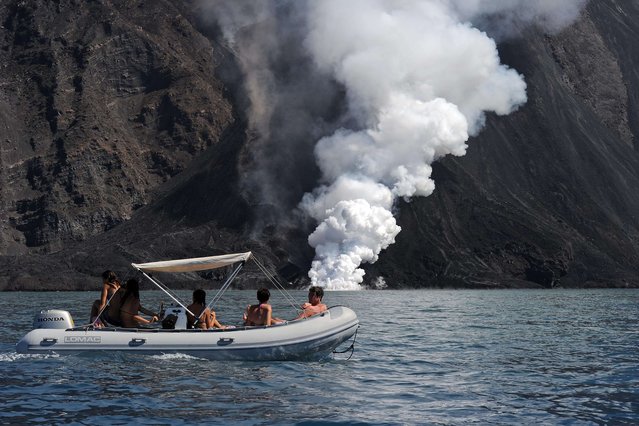 People sail on a boat as lava from the Stromboli volcano flows into the sea, on August 9, 2014. Stromboli, one of Europe's most active volcano, is part of the seven-island Eolian Archipelago just off Sicily in southern Italy. (Photo by Giovanni Isolino/AFP Photo) 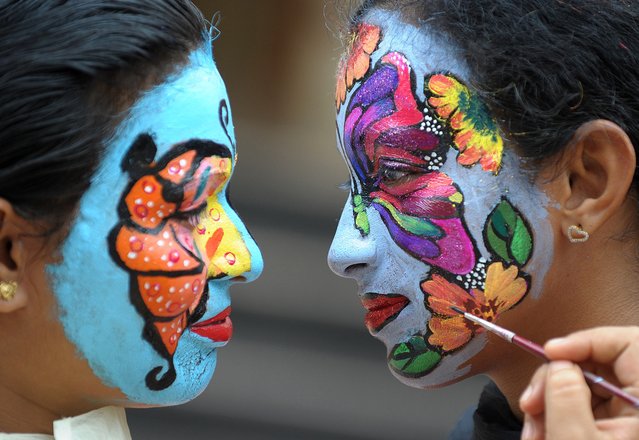 Indian nursing students participate in a face painting competition on the theme of “preserving the nature” at Vijay Marie College of Nursing in Hyderabad on August 11, 2014 on the occasion of the country's upcoming Independence Day celebrations. India celebrates its anniversary of Independence from Britian on August 15. (Photo by Noah Seelam/AFP Photo) 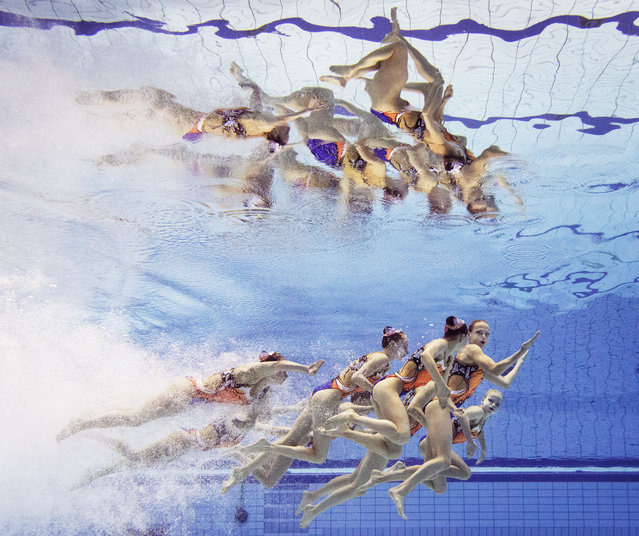 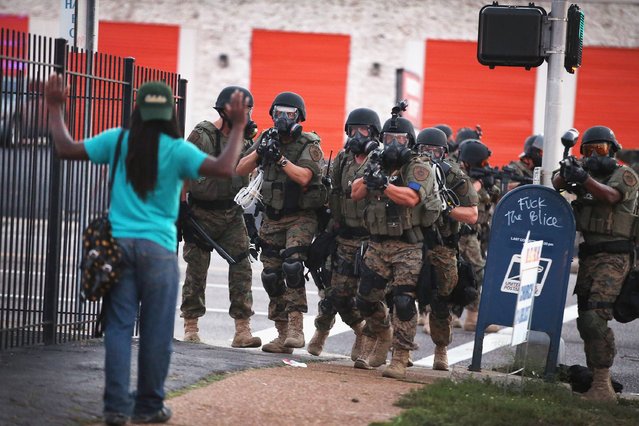 Police force protestors from the business district into nearby neighborhoods on August 11, 2014 in Ferguson, Missouri. Police responded with tear gas and rubber bullets as residents and their supporters protested the shooting by police of an unarmed black teenager named Michael Brown who was killed Saturday in this suburban St. Louis community. Yesterday 32 arrests were made after protests turned into rioting and looting in Ferguson. (Photo by Scott Olson/Getty Images)
Edit Del
16 Aug 2014 10:53:00, post received 0 comments
Publication archive:
←   →
Popular tags:
All tags
Last searches: