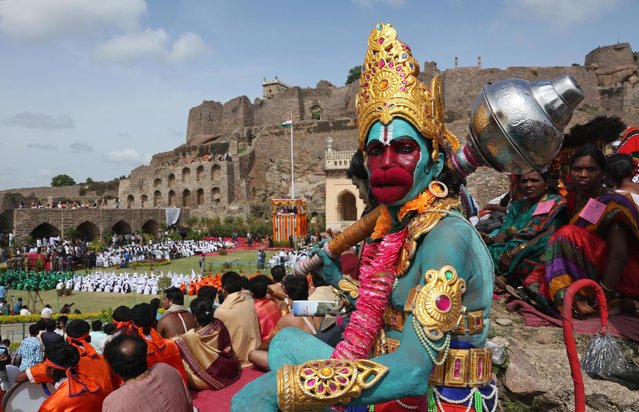 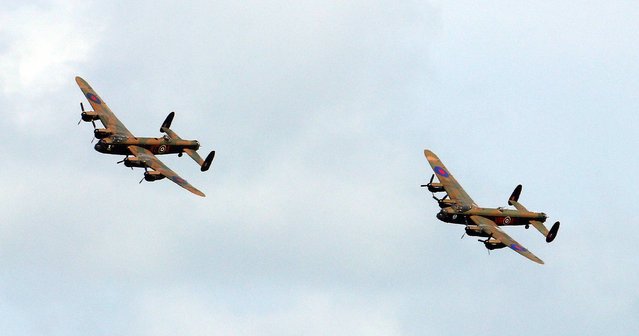 The world's two only properly functioning Lancaster bombers take to the skies above Eastbourne, Sussex, a display that hasn't been seen since the 1950's as part of the town's annual Eastbourne Air Show, on August 14, 2014. (Photo by Gareth Fuller/PA Wire) 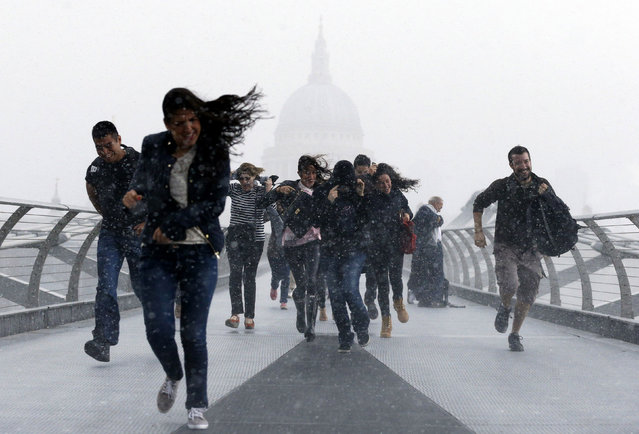 Pedestrians dash through a sudden downpour along the Millennium Bridge, with St. Paul's Cathedral in the background, as the remnants of Hurricane Bertha sweep across parts of the country, London, Sunday, August 10, 2014. (Photo by Jonathan Brady/AP Photo/PA Wire) 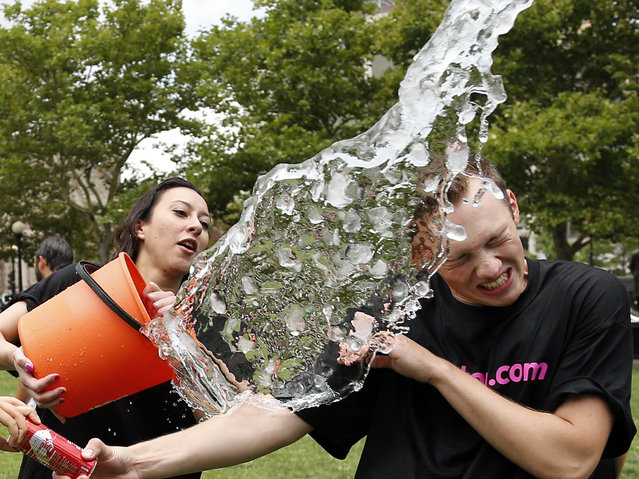 Beryl Lipton, left, douses Matt Lee during the ice bucket challenge at Boston's Copley Square, Thursday, August 7, 2014 to raise funds and awareness for ALS. The idea is: pay up for charity or get doused. The fund-raising phenomenon is catching on fast, propelled by popular videos of the dunkers and the dunked – including famous athletes and entertainers – posted on social media sites. And the challenges are raising tens of thousands of dollars and immeasurable awareness for causes from ALS to breast cancer to a camp for kids who've lost a father to war. (Photo by Elise Amendola/AP Photo) 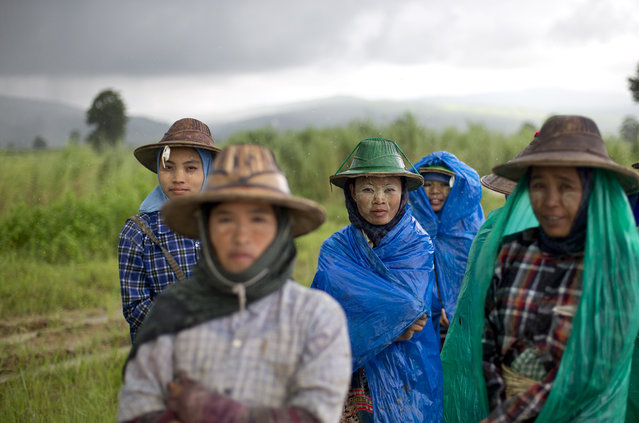 A group of Myanmar rice-field workers cover themselves in plastic sheets as monsoon rain pour down in Naypyidaw, Myanmar, Monday, August 11, 2014. Farmers grow rice with the help of the monsoon rain, which starts late May and ends in mid-October. (Photo by Gemunu Amarasinghe/AP Photo) 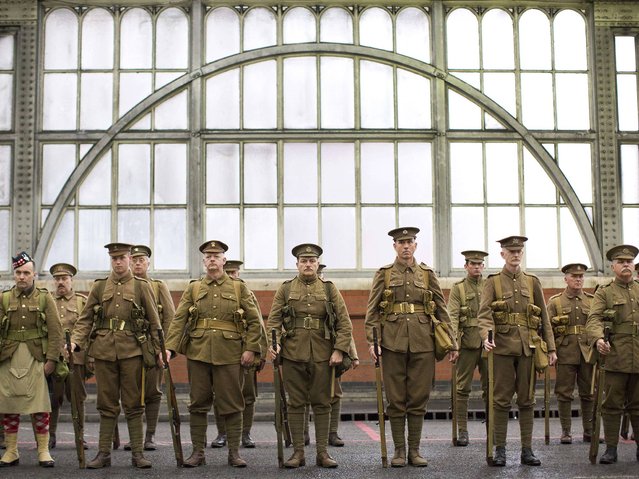 Members of the Association of Military Remembrance, also known as The Khaki Chums, stand in ranks as they re-enact the journey 100 years ago today of the first WW1 soldiers to mobile at London's railway stations to travel to the south coast before onward deployment to France at Waterloo station in London on August 10, 2014. When Britain declared war on Germany on 4th August 1914, trains were used to rapidly mobilise British forces and their equipment and transport them to France. August 10, 2014 marks 100 years to the day when the first troops mobilised at London's railway stations. (Photo by Justin Tallis/AFP Photo) 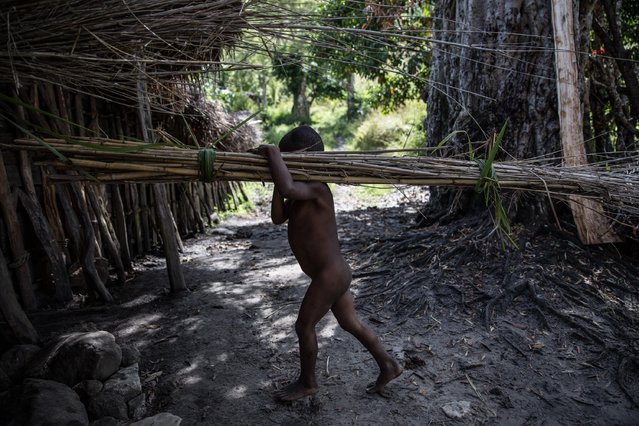 A boy from the Dani tribe carries a bunch of bamboos twigs at Obia Village on August 9, 2014 in Wamena, Papua, Indonesia. The stone-age Dani tribe live a traditional existence in the Baliem Valley, which is situated 1600 metres above sea level in the heart of the Cyclops Mountains. The valley has one of the highest densities of population in Papua Province but Wamena is the only town. It is estimated that 250,000 members of the Dani Tribe live in the region. The Dani's settlements are usually located on the river banks and hill slopes of the Valley. In the settlement, they live in a structures called Honai, Eweai and Leseai. Leseai is a square shaped unit used for family gatherings, cooking and eating. Honai and Eweai are round shaped sleeping quarters without ventilation to trap heat, as it gets very cold at night. The tribe were once famed as a head-hunting tribe because they often had to fight for their territory against different villages or other tribes. They are mostly farmers and hunters and while hunting or working in the fields they will sing songs, usually accompanied by a musical instrument known as Pikon. The sound of Pikon also serves as an identification signal to a friend or an enemy. (Photo by Agung Parameswara/Getty Images) 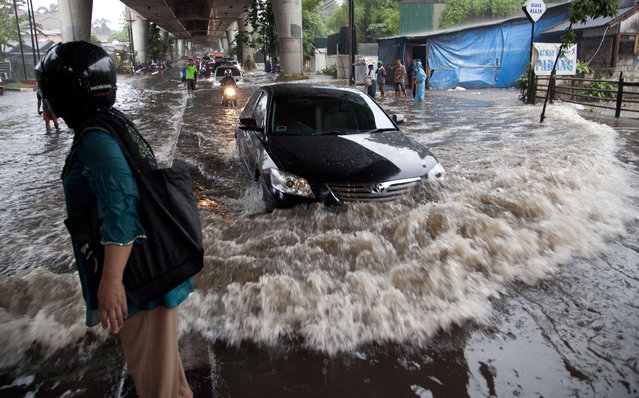 A car drives through a flooded road in Jakarta, Indonesia, Monday, August 11, 2014. The unseasonal rains flooded many areas of South Jakarta in the late afternoon causing much traffic congestion as commuters attempted to make their way home. (Photo by Mark Baker/AP Photo) 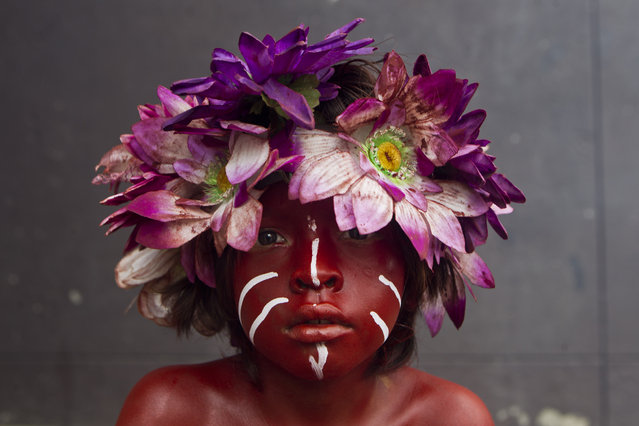 In this August 4, 2014, photo, a boy with his body covered in red paint poses for a portrait during the Santo Domingo festivities in Managua, Nicaragua. The faithful coat their bodies in used motor oil or red paint, and dress in traditional costumes as a promise for a prayer or miracle they believe was performed or answered by Managua's patron saint, Santo Domingo de Guzman. (Photo by Esteban Felix/AP Photo) 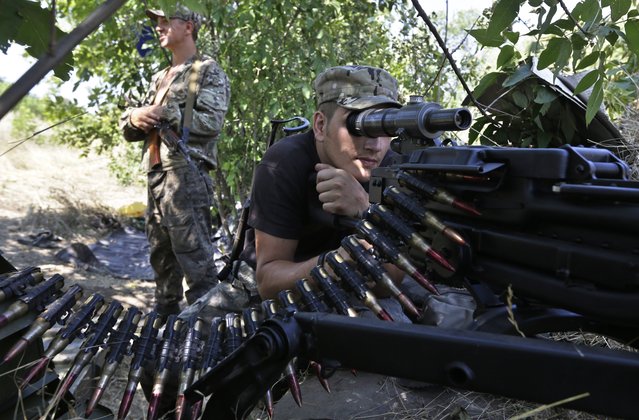 Pro-Russian rebels hold their positions on the frontline near the village of Krasnodon, eastern Ukraine, Friday, August 15, 2014. Russia let Ukrainian officials inspect an aid convoy while it was still on Russian soil Friday and agreed that the Red Cross can distribute the goods in Ukraine's rebel-held city of Luhansk. (Photo by Sergei Grits/AP Photo) 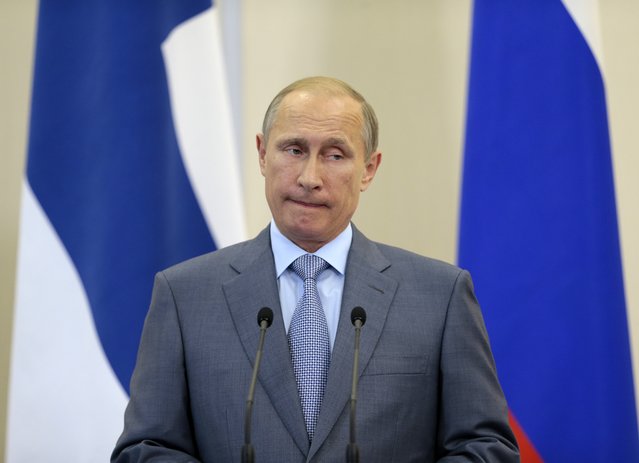 Russian President Vladimir Putin speaks during his and Finnish President Sauli Niinisto's news conference after talks at a residence in the Black Sea resort of Sochi, southern Russia, in Sochi, Russia, Friday, August 15, 2014. Putin met with his Finnish counterpart Sauli Niinisto here on Friday to discuss interaction between the two countries, as well as international problems, first of all, the situation in Ukraine, the Kremlin press service reported. (Photo by Ivan Sekretarev/AP Photo) 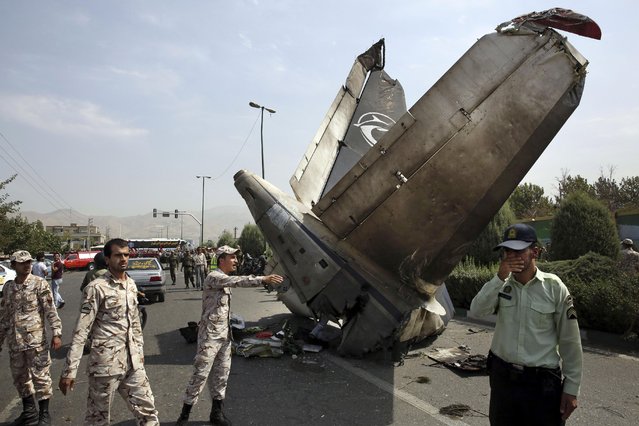 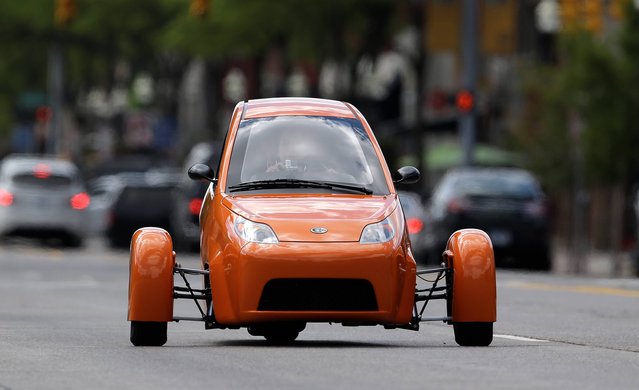 The Elio, a three-wheeled prototype vehicle, is shown in traffic in Royal Oak, Mich., Thursday, August 14, 2014. Instead of spending $20,000 on a new car, Paul Elio is offering commuters a cheaper option to drive to work. His three-wheeled vehicle The Elio will sell for $6,800 car and can save on gas with fuel economy of 84 mpg. (Photo by Paul Sancya/AP Photo) 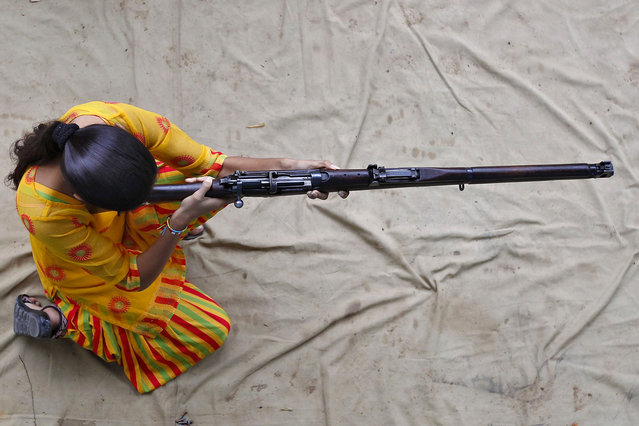 A girl practices with a rifle during weapons training course at the firing range of the police headquarters in the western Indian city of Ahmedabad August 12, 2014. Thousands of girls across Gujarat state are participating in the fifteen-day self defense training programmes jointly organised by the police and the state government of Gujarat, a police media release said. (Photo by Amit Dave/Reuters) 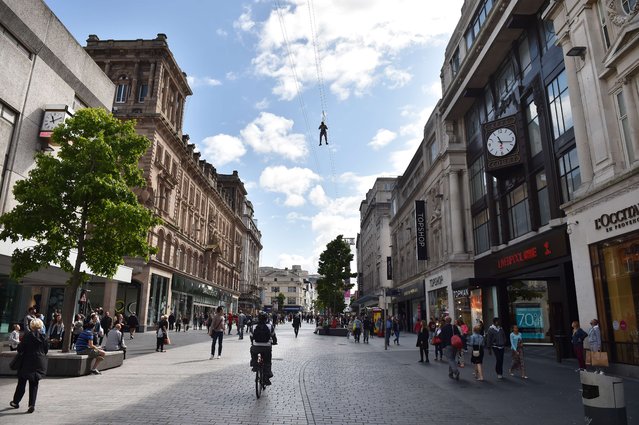 A member of the public rides a zip wire that has been built above one of the main shopping streets in Liverpool, north-west England on August 11, 2014. The 1000ft long wire will be open until September 7. (Photo by Paul Ellis/AFP Photo) 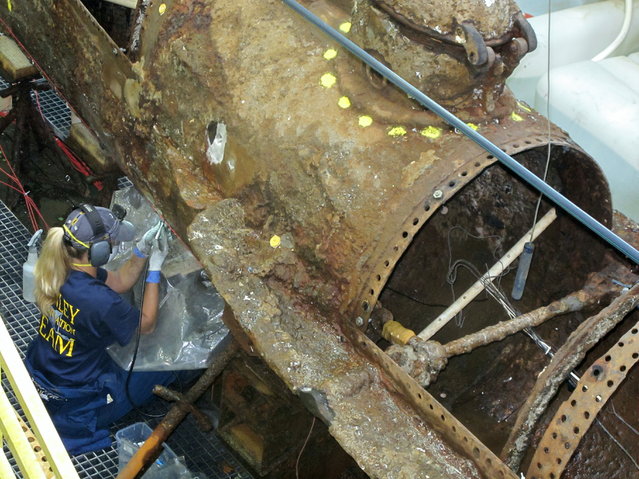 Conservator Liisa Nasanen uses tools to remove encrustation from the hull of the Confederate submarine H.L. Hunley at the Warren Lasch Conservation Center in North Charleston, S.C., on Tuesday, August 12, 2014. After the submarine sat in a chemical bath for more than three months to help loosen the encrustation, scientists on Tuesday began the laborious job of removing the built-up sediment by hand. The work is expected to take between eight months and a year and scientists hope that when the hull is revealed, it will provide the final clues as to why the hand-cranked sub, the first in history to sink an enemy warship, sank off South Carolina in 1864. (Photo by Bruce Smith/AP Photo) 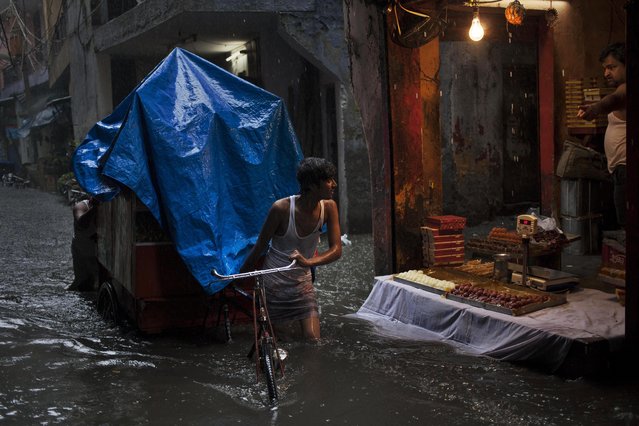 An Indian sweets vendor, right, shouts at a laborer who is pulling a cart through a street flooded due to monsoon rains in New Delhi, India, Sunday, August 10, 2014. The vendor was reacting angrily since the ripples created by the cart's movement was causing the floodwater to enter his shop. (Photo by Tsering Topgyal/AP Photo) 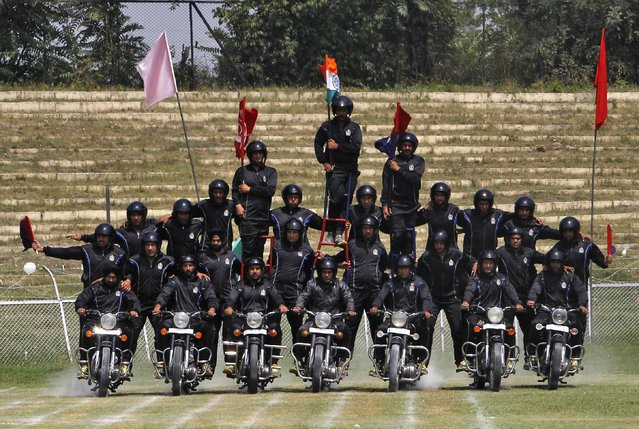 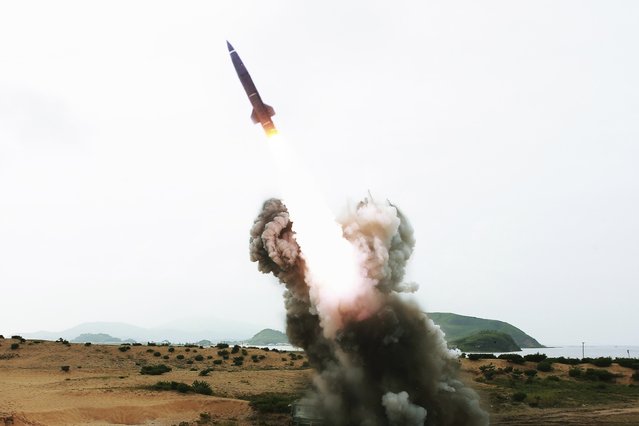 A tactical rocket is launched during a test fire in this undated photo released by North Korea's Korean Central News Agency (KCNA) in Pyongyang August 15, 2014. (Photo by Reuters/KCNA) 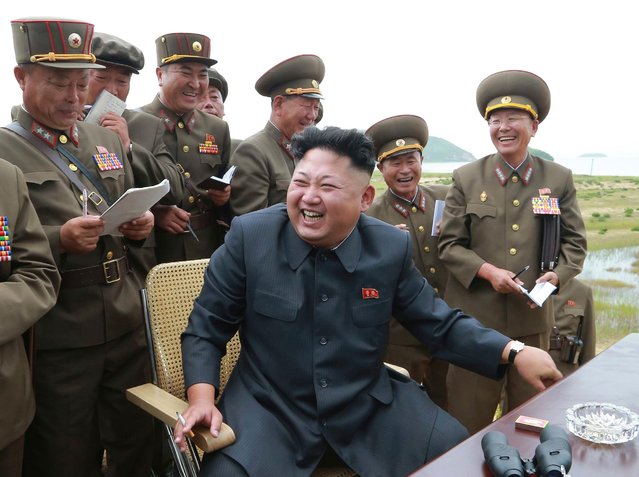 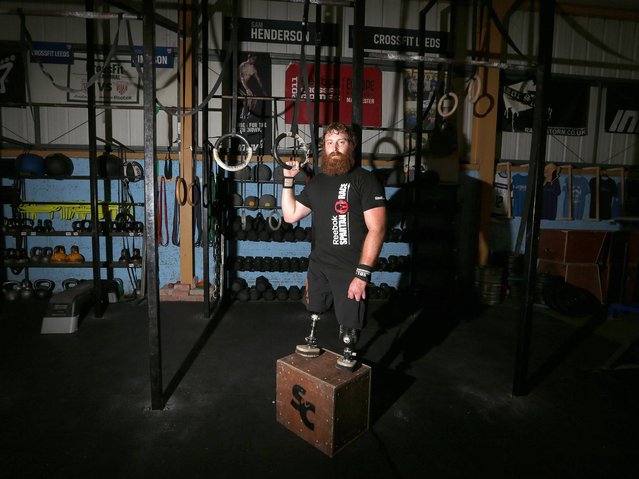 Stevie Richardson, 26, from Edinburgh, trains at CrossFit, Leeds, ahead of taking part in the Spartan Race event, on August 10, 2014. (Photo by Lynne Cameron/PA Wire) 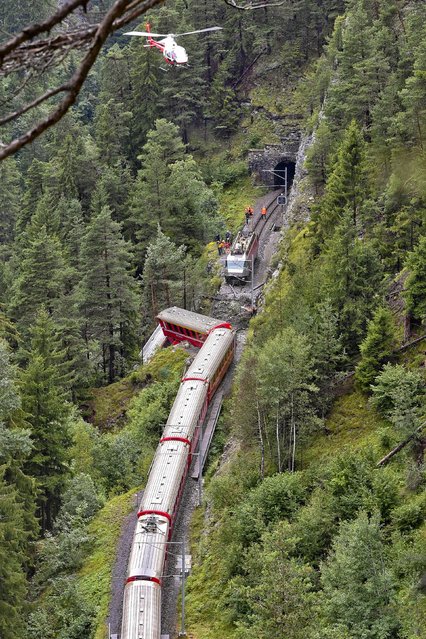 A helicopter flies over a train after it was derailed by a landslide near Tiefencastel, in a mountainous part of eastern Switzerland, on August 13, 1014. A landslide derailed a passenger train in the Swiss mountains on August 13 sending one carriage plunging into a ravine but it appeared that miraculously there had been no deaths. (Photo by Michael Buholzer/AFP Photo) 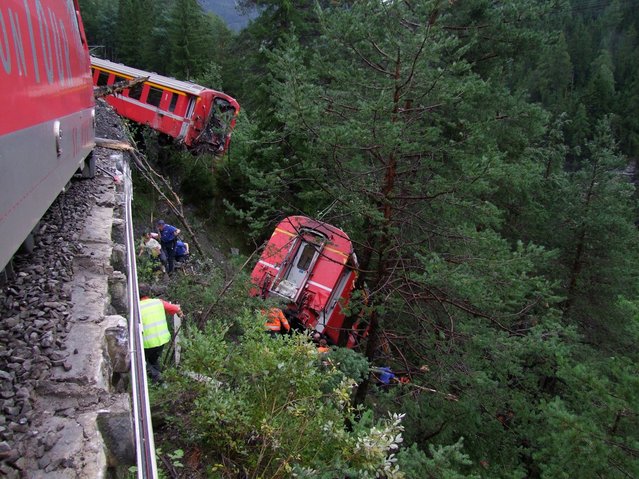 Police and rescue workers help after a passenger train derailed into a ravine near Tiefencastel in a mountainous region of southeastern Switzerland after encountering a mudslide on the tracks August 13, 2014. Several passengers were injured after at least three train carriages came off the tracks near Tiefencastel, a village less than 50 km (31 miles) northwest of the ski resort St. Moritz. (Photo by Kantonspolizei Graubunden/Reuters) 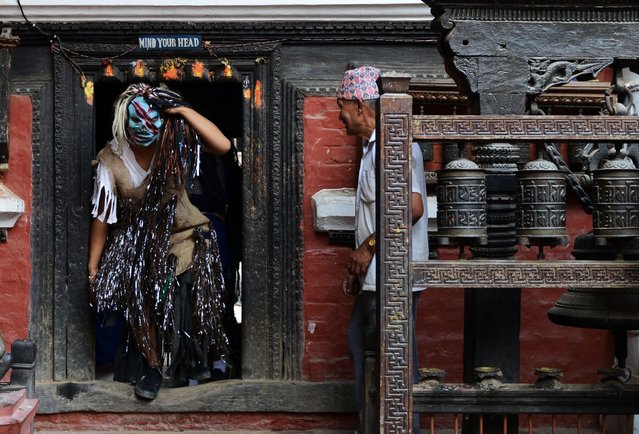 A Nepalese Buddhist devotee wears a mask takes part in the Neku Jatra-Mataya festival in Patan in Kathmandu, August 12, 2014. The Buddhist festival marks the victory of Sakyamuni Buddha over Mara, where devotees pray for the souls of departed family members and hold parades throughout the city. (Photo by Prakash Mathema/AFP Photo) 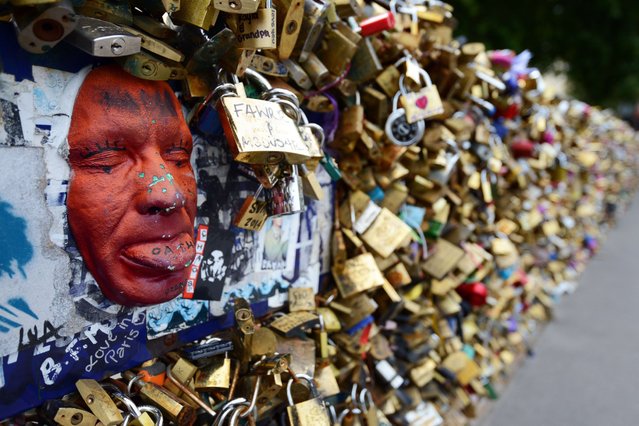 Paris shows love padlocks attached to the railing of the Archeveche bridge in Paris, August 13, 2014. (Photo by Domnique Faget/AFP Photo) 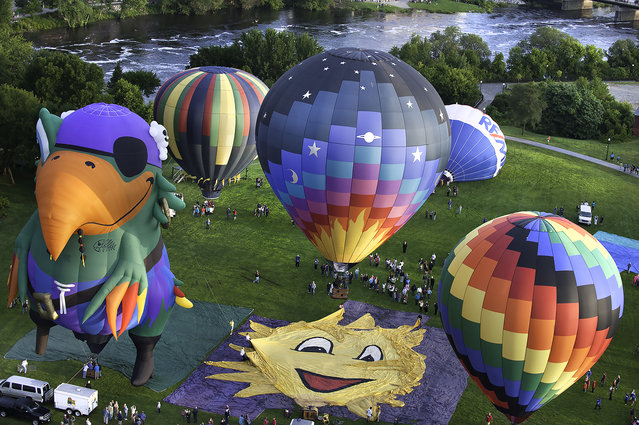 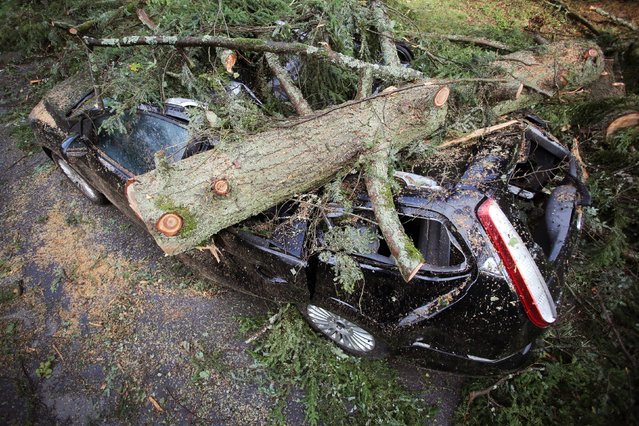 The log of a tree sits on a car after a storm in Bad Schwalbach near Frankfurt, Germany, Monday, August 11, 2014. A thunderstorm destroyed several cars and damaged buildings on Sunday evening. (Photo by Fredrik von Erichsen/AP Photo/DPA) 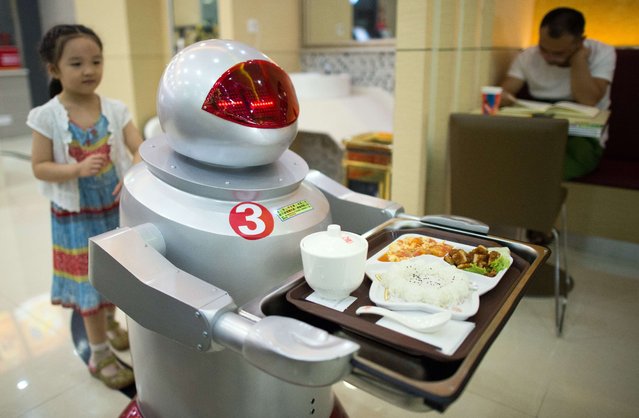 This photo taken on August 13, 2014, shows a robot carrying food to customers in a restaurant in Kunshan. It's more teatime than Terminator – a restaurant in China is electrifying customers by using more than a dozen robots to cook and deliver food. (Photo by Johannes Eisele/AFP Photo) 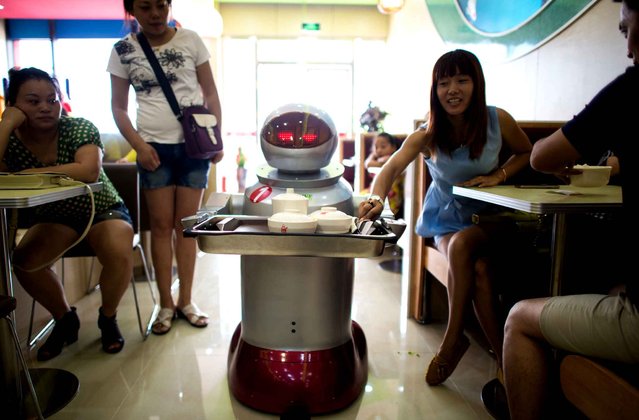 This photo taken on August 13, 2014, shows a robot carrying food to customers in a restaurant in Kunshan. (Photo by Johannes Eisele/AFP Photo) 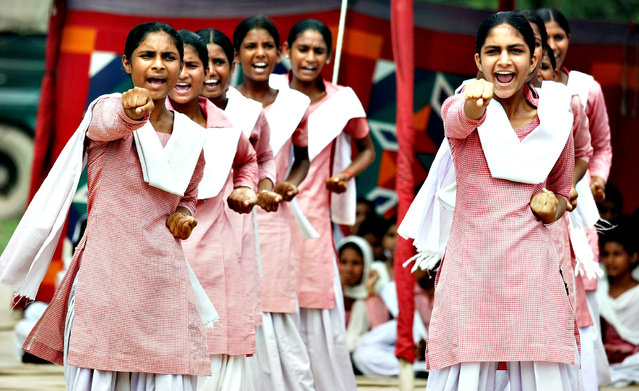