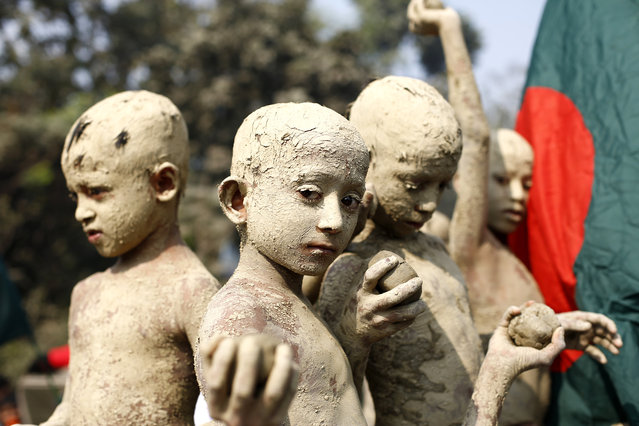 Bangladeshi children, covered in mud to look like freedom fighters, attend a rally during the Victory Day celebration in Gazipur, Bangladesh, December 16, 2014. Bangladesh marks 43rd Victory Day across the country remembering the war heroes. Bangladesh became a free nation after a nine-month bloody war against Pakistan on December 16, 1971. (Photo by Abir Abdullah/EPA) 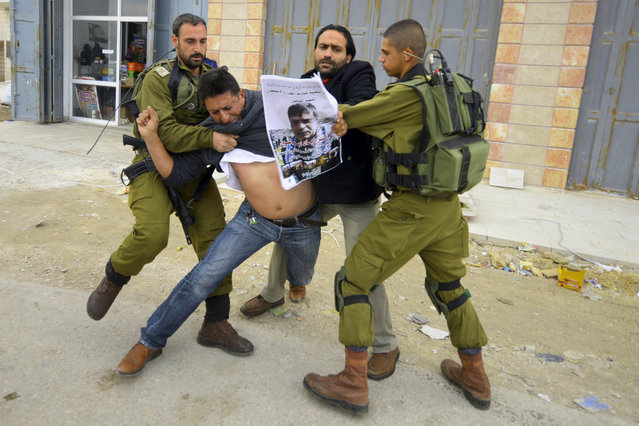 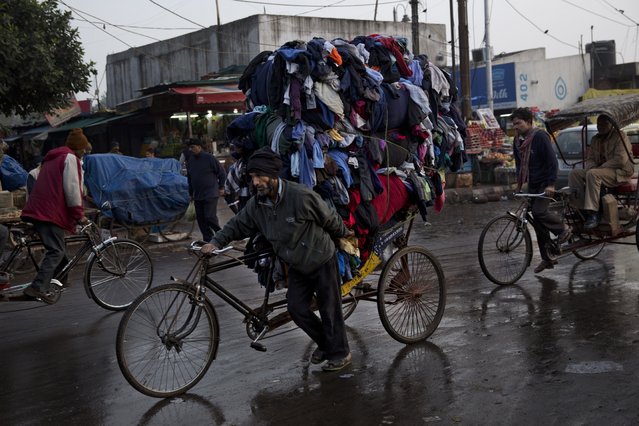 An Indian man pulls a cycle rickshaw carrying bundles of clothes near the Jama Masjid, one of the biggest mosques situated on a busy street in the old parts of New Delhi, India, Monday, December 15, 2014. Old Delhi despite of being extremely crowded and dilapidated still serves as the symbolic heart of the city. (Photo by Bernat Armangue/AP Photo) 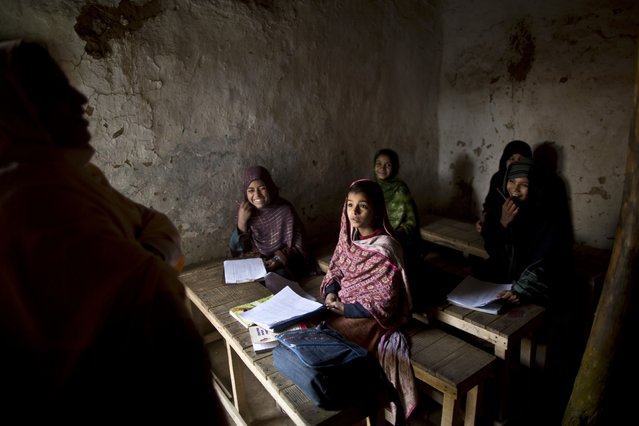 Afghan refugees and internally displaced Pakistani school girls laugh with their teacher during an exam at a makeshift school on the outskirts of Islamabad, Pakistan, Friday, December 19, 2014, days after Taliban fighters killed 148 people – most of them children – in a school massacre. (Photo by Muhammed Muheisen/AP Photo) 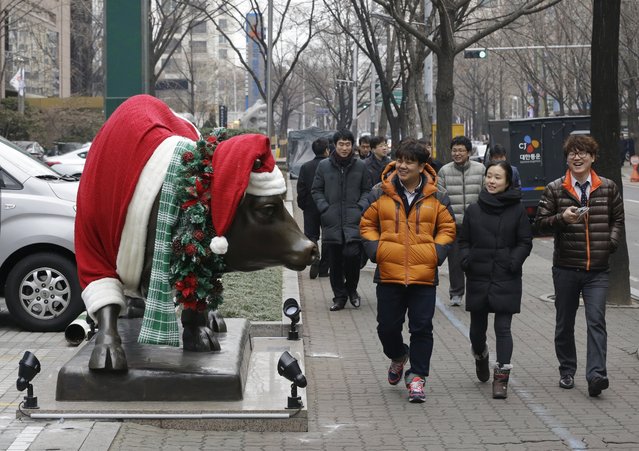 Passersby look at a bull statue decorated with a Santa Claus costume on display in a sidewalk outside a security firm in Seoul, South Korea, Monday, December 15, 2014. (Photo by Ahn Young-joon/AP Photo) 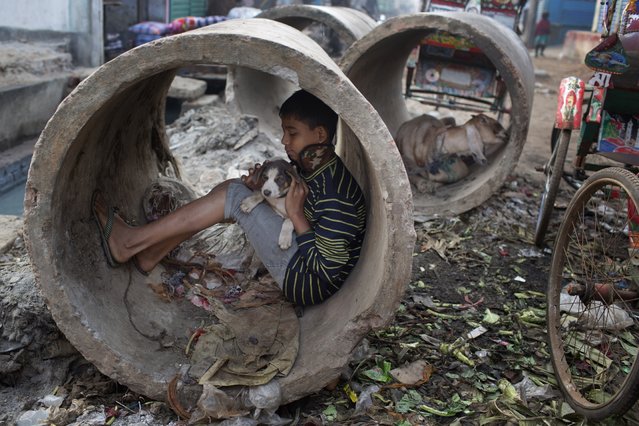 A Bangladeshi boy holds a dog and sits inside a concrete pipe by the side of a road, on a cold winter morning in Dhaka, Bangladesh, Friday, December 19, 2014. A 2013 World Bank report said there was a continuous decline in the number of poor people in Bangladesh, one of the most densely populated countries in the world, from nearly 63 million in 2000, to 55 million in 2005, and then 47 million in 2010. (Photo by A. M. Ahad/AP Photo) 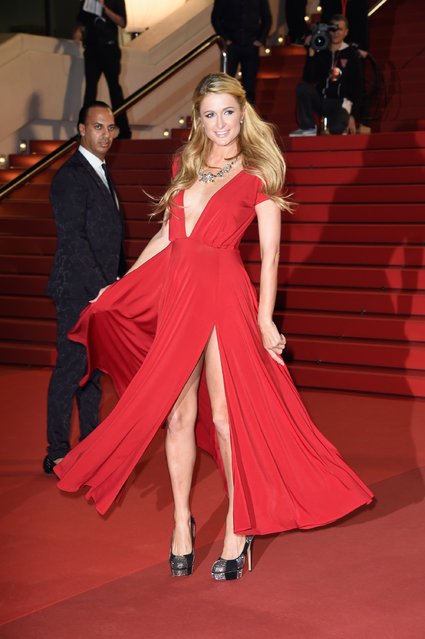 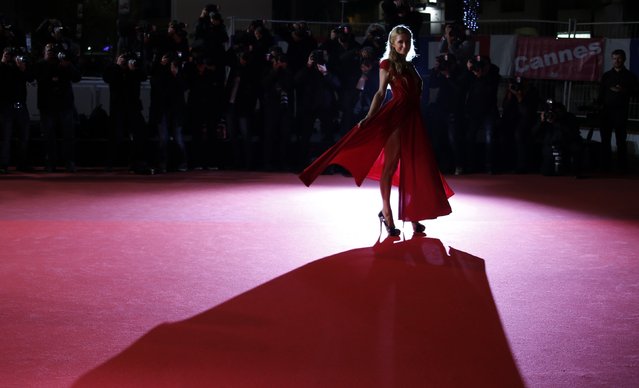 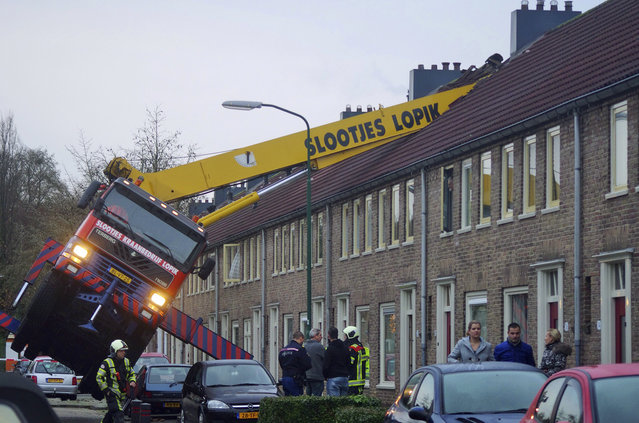 A crane which crashed into the roof of a house is seen following an unusual marriage proposal by a man who wished to be lifted in front of the bedroom window of his girlfriend to ask for her hand in marriage, in the central Dutch town of IJsselstein, Saturday December 13, 2014. No people were injured in the accident, the groom-to-be jumped to safety without injuries and his girlfriend accepted to marry him, according to local Dutch media. (Photo by AP Photo/AS Media) 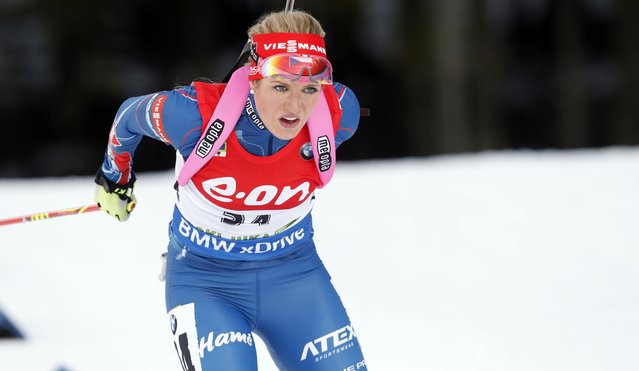 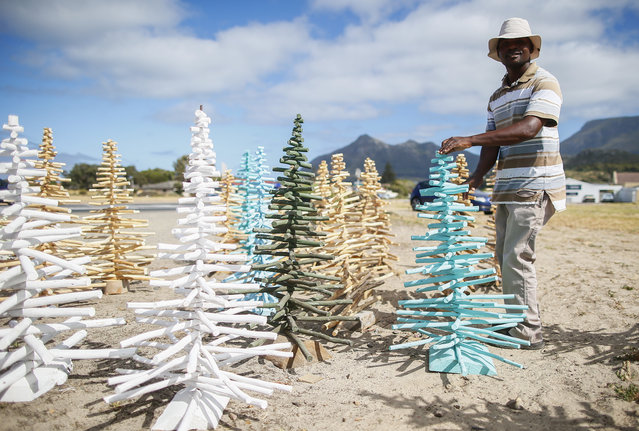 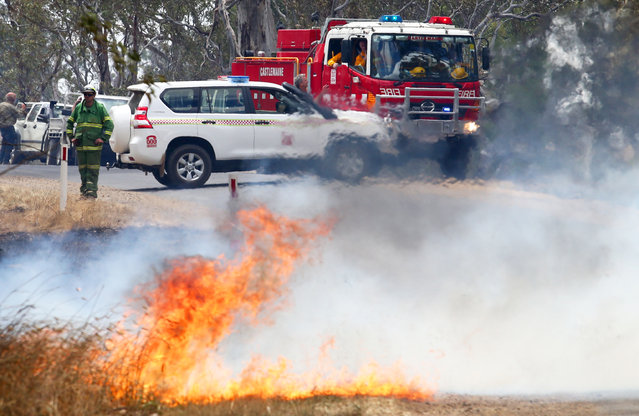 Country Fire Authority (CFA) firefighters work to mop up a fire near Mia Mia in Victoria, Australia, December 18, 2014. Bushfires have been burning in north Eastern Victoria and are believed to have started from lightning strikes. (Photo by David Crosling/EPA) 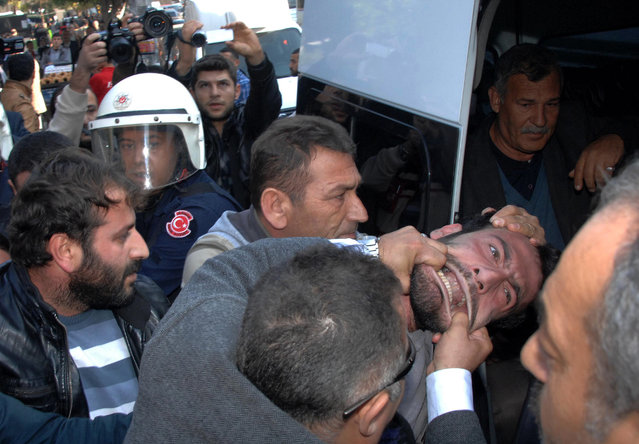 Plain clothed police officers detain a man who was trying to set up a tent to mourn and commemorate the fighters killed in Syrian city of Ayn al-Arab or Kobani, in southern Turkish city of Adana, Turkey, Monday, December 15, 2014.(Photo by AP Photo/Hurriyet) 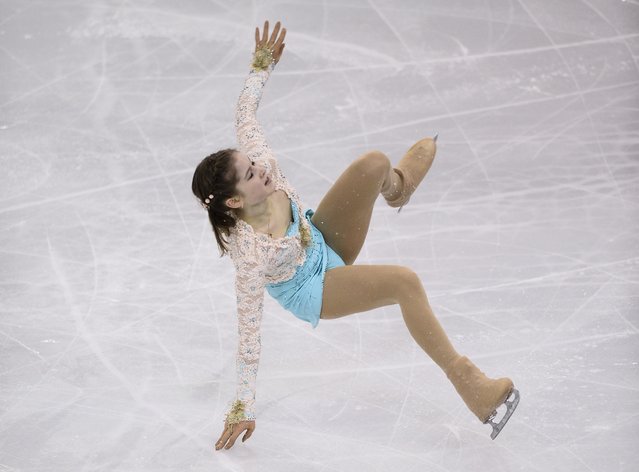 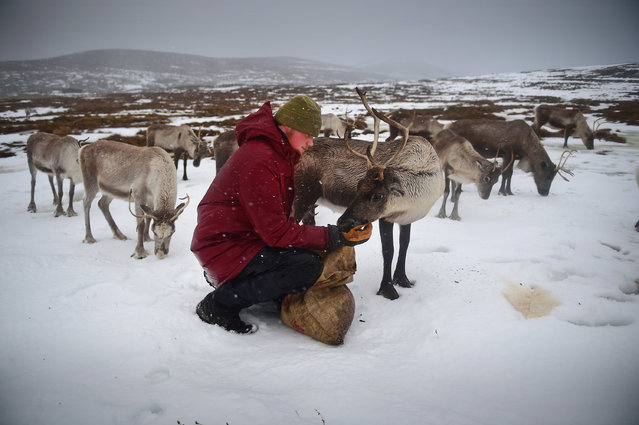 Zac Brown a reindeer herder at the Cairgorm Herd feed the deer at The Cairngorms National Park on December 14, 2014 in North East Scotland. Reindeer were introduced to Scotland in 1952 by Swedish Sami reindeer herder, Mikel Utsi. Starting with just a few reindeer the herd has now grown in numbers over the years and is currently at about 130 by controlling the breeding. The herd rages on 2,500 hectares of hill ground between 450 and 1,309 meters and stay above the tree line all year round regardless of the weather conditions. (Photo by Jeff J. Mitchell/Getty Images) 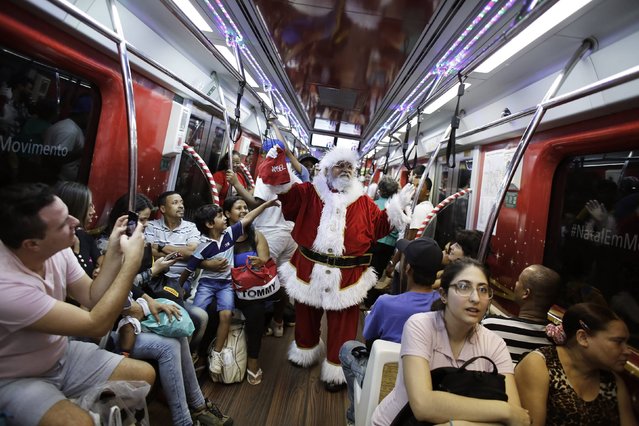 A man, dressed as Santa Claus, rides a subway train as part of a promotional event by a bank in Sao Paulo December 12, 2014. (Photo by Nacho Doce/Reuters) 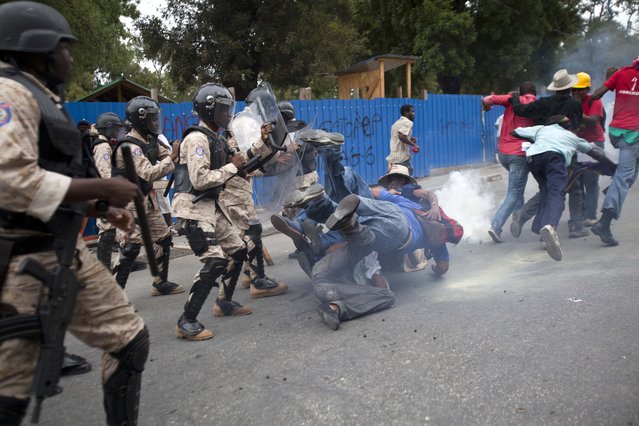 Anti-government demonstrators fall to the ground during clashes with national police officers during a protest calling for the resignation of Haiti's President Michel Martelly in Port-au-Prince, Haiti, Tuesday, December 16, 2014. Haiti's capital has endured a growing number of demonstrations in recent weeks during which protesters have demanded the holding of elections that were expected in 2011 and the resignations of Prime Minister Laurent Lamothe as well as President Michel Martelly. Lamothe resigned over the weekend. (Photo by Dieu Nalio Chery/AP Photo) 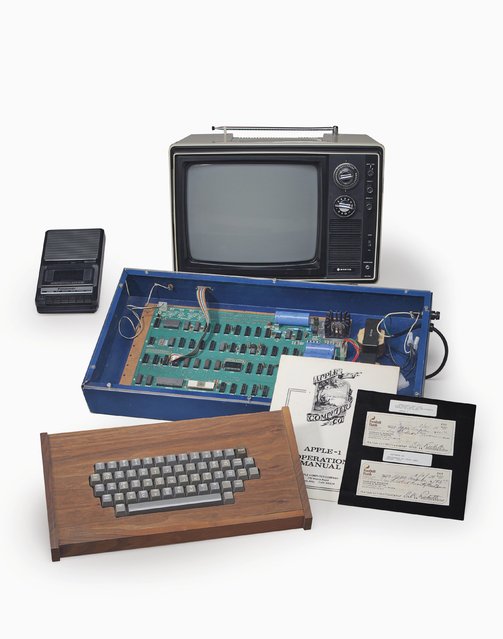 The Ricketts Apple-1 Personal Computer, named after its original owner Charles Ricketts, is shown in this Christie's handout photo released on December 12, 2014. The fully operational Apple computer that company co-founder Steve Jobs sold out of his parents' garage in 1976 for $600 sold for $365,000 at Christie's on Thursday. (Photo by Reuters/Christie's Images LTD. 2014) 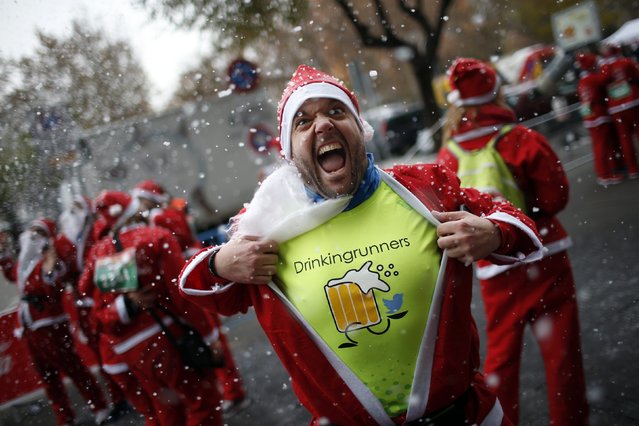 A man dressed in a Santa outfit reacts for the camera under artificial snow at the end of the annual Carrera de Papa Noel (Santa Claus Run), in Madrid, December 13, 2014. (Photo by Juan Medina/Reuters) 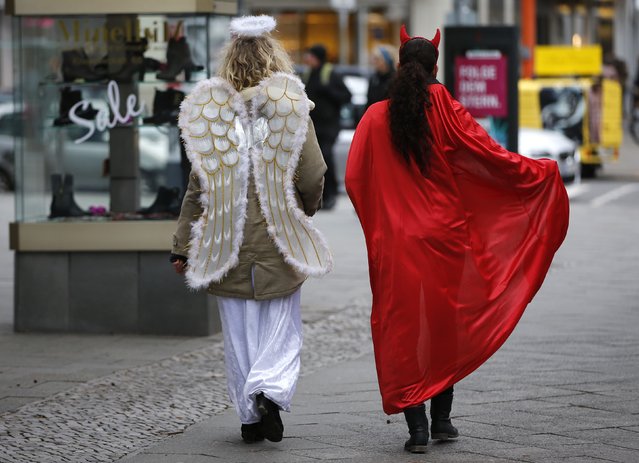 Two women, one dressed as an angel (L) and one as a devil, walk during a Christmas shopping promotion event at the main shopping street Kurfuerstendamm boulevard in Berlin December 13, 2014. (Photo by Fabrizio Bensch/Reuters) 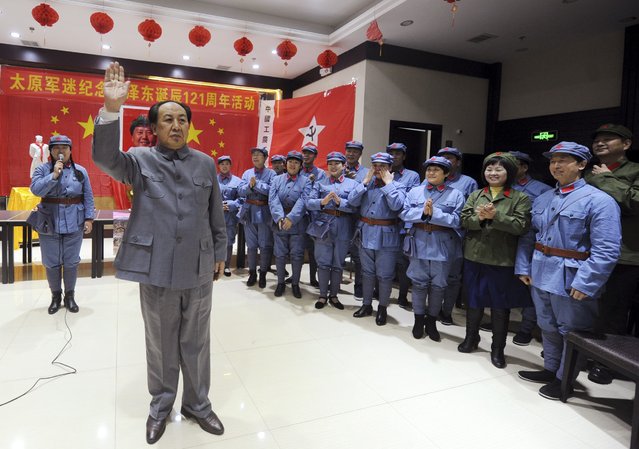 Ren Zhenlong (front), an impersonator of China's late Chairman Mao Zedong, waves next to people dressed as Red Army soldiers during a performance to celebrate the upcoming 121st anniversary of Mao's birth, in Taiyuan, Shanxi province, December 13, 2014. (Photo by Reuters/Stringer) 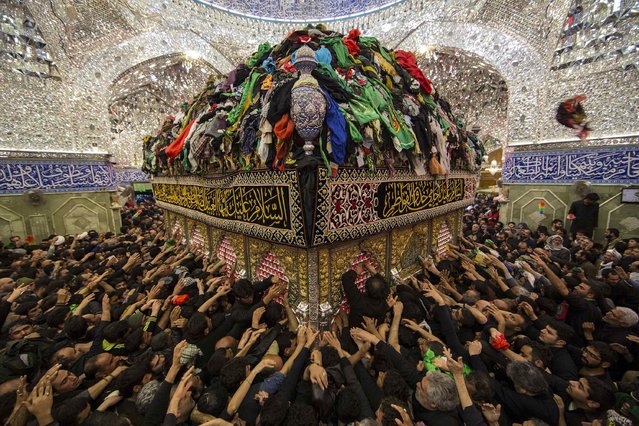 Shi'ite Muslim pilgrims reach out to touch the tomb of Imam al-Abbas located inside the Imam al-Abbas shrine to mark Arbain in the holy city of Kerbala, southwest of Baghdad December 13, 2014. Iraqi officials say millions of Shi'ite pilgrims from across Iraq and neighbouring countries are expected in Kerbala for Saturday's Arbain ritual, which marks the last of 40 days mourning for the death 1,300 years ago of Imam Hussein. (Photo by Reuters/Stringer) 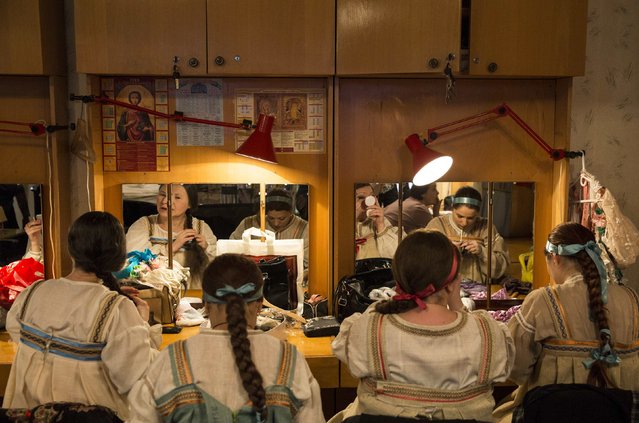 Singers of the Donbass Opera Theatre chorus, also known as the Donetsk Opera Theatre, prepare for a performance in Donetsk December 13, 2014. Russian soprano Anna Netrebko, one of the biggest names in international opera, has stirred controversy by posing with the flag of Ukraine's pro-Russian rebels and making a donation to the opera house in the separatists' main stronghold, Donetsk. Netrebko said on Facebook she had not recognized the flag of "Novorossiya" (New Russia) when she posed alongside a rebel official on Sunday and entrusted him with the donation of 1 million roubles ($18,439). (Photo by Maxim Shemetov/Reuters) 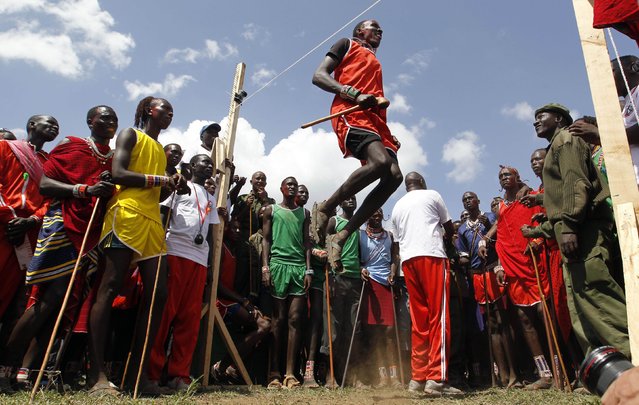 A Maasai moran competes in their traditional high-jump event during the Maasai Olympics 2014 at the Sidai Oleng wildlife sanctuary at the base of Mt. Kilimanjaro near the Kenya-Tanzania border in Kajiado December 13, 2014. Scores of young Maasais representing four manyattas – a barrack for warriors aged about 16-25 – competed against each other on Saturday for prestige, bragging rights and a prized breeding bull for their manyatta. The Maasai Olympics is a biennial event focused on ending Maasais' enduring cultural tradition of killing lions. (Photo by Thomas Mukoya/Reuters) 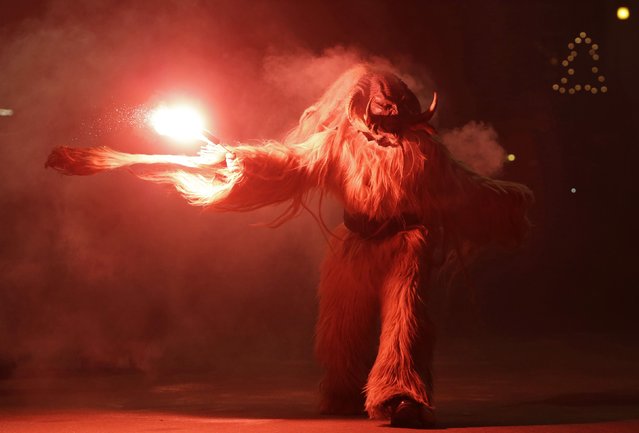 A man dressed as a devil performs during a Krampus show in the southern Bohemian town of Kaplice December 13, 2014. Each year people in traditional costumes and masks parade through the streets to perform an old ritual to disperse the ghosts of winter. (Photo by David W. Cerny/Reuters) 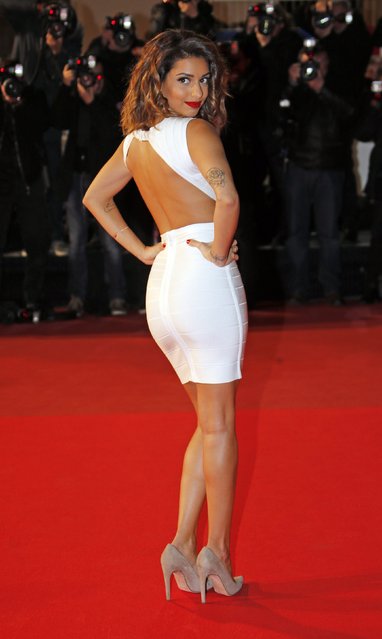 Singer Tal arrives for the NRJ Music Awards ceremony at the Festival Palace in Cannes December 13, 2014. (Photo by Eric Gaillard/Reuters) 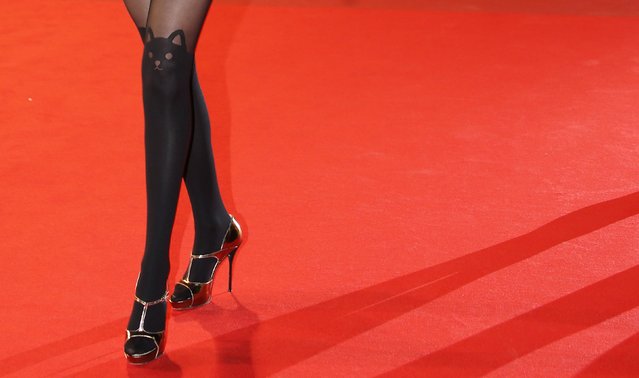 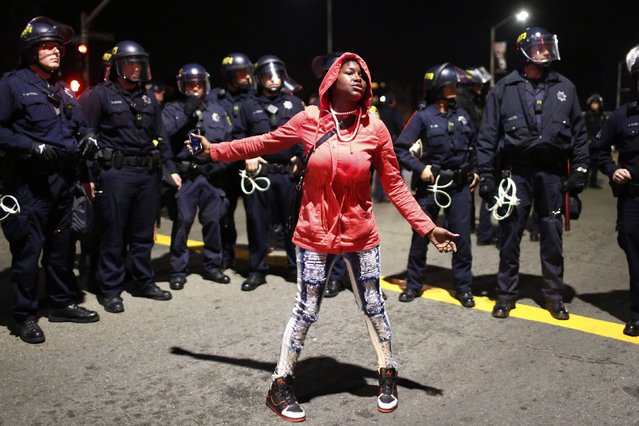 A woman pleads to be released by the police after she was surrounded during an evening demonstration against police violence in Oakland, California December 13, 2014. Decisions by grand juries to return no indictments against the officers involved in the deaths of Michael Brown in Missouri and Eric Garner in New York have put police treatment of minorities back on the national agenda. Police in Oakland, California, ordered hundreds of demonstrators to disperse on Saturday night after a grocery store was looted. (Photo by Stephen Lam/Reuters) 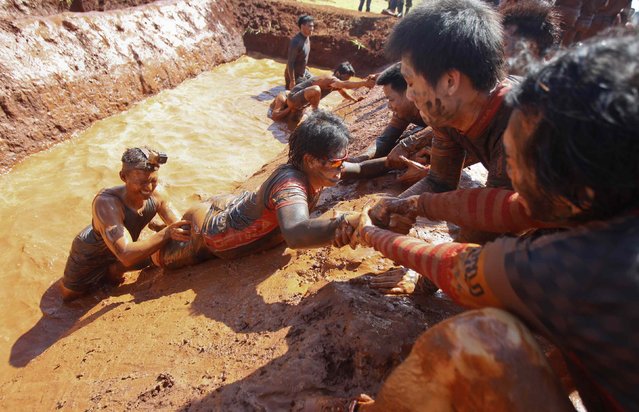