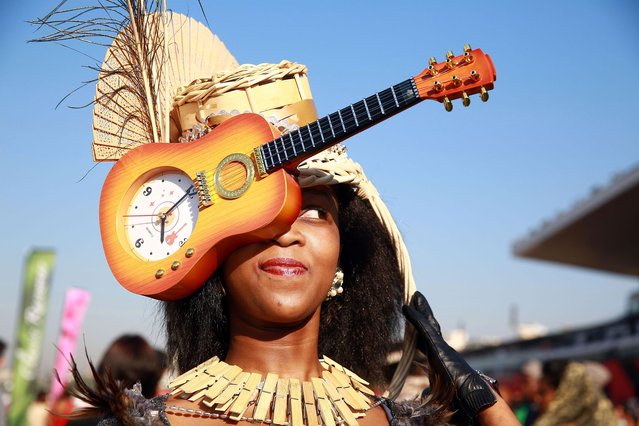 A woman poses as she arrives dressed up for a fashion competition during the annual Durban July horse race on July 5, 2014, in Durban, South Africa. The Durban July horse race is the biggest horse racing event on the African continent and a high social event where South African celebrities dress up and watch the race. It attracts close to 100,000 spectators and bets are placed in excess of 20 million US dollars. (Photo by Rajesh Jantilal/AFP Photo) 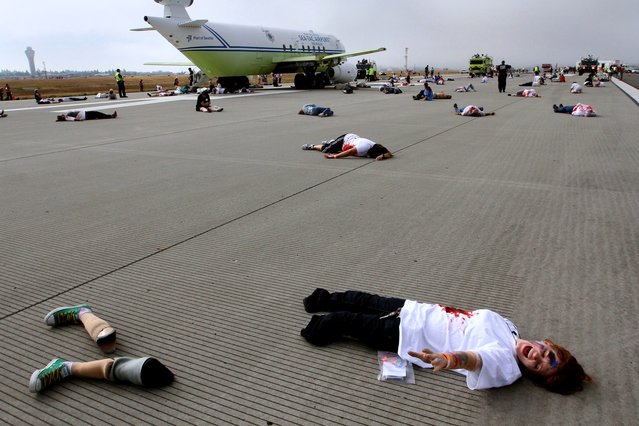 Genessa Faye of Seattle yells out, “Help me!” to responders to a mock airplane crash at SeaTac International Airport, Thursday, July 10, 2014. Approximately 300 volunteers took part in the mock crash site on the third runway at the airport. The volunteers were given clothes, makeup and a card which told him how badly they had been “injured” and instructed them how to act. Port of Seattle Fire Department ARRF vehicles responded from their positions on the east side of the airfield across taxiways and runways to the west side runway and mock aircraft. (Photo by Ellen M. Banner/AP Photo/The Seattle Times) 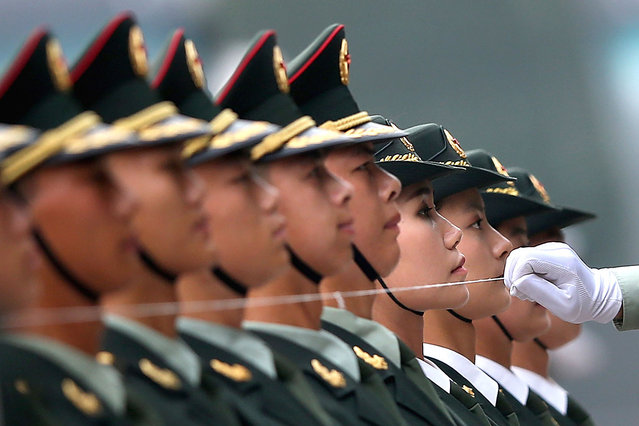 An officer of a Chinese People's Liberation Army (PLA) honour guard uses a string to ensure members of the honour guard are standing in a straight line, before a welcoming ceremony for Germany's Chancellor Angela Merkel outside the Great Hall of the People in Beijing July 7, 2014. (Photo by Feng Li/Getty Images) 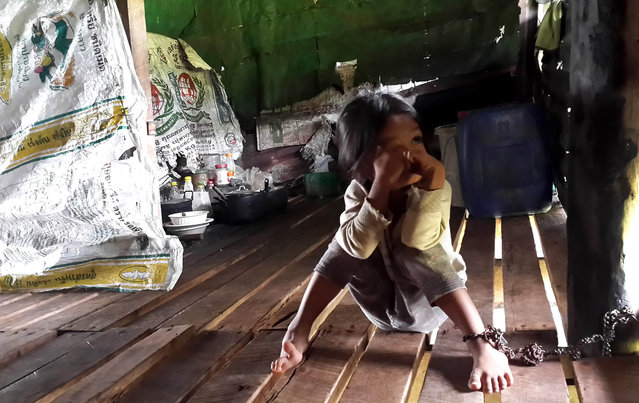 This handout photo taken on July 4, 2014 and released by the Cambodian Human Rights and Development Association (ADHOC) on July 7, 2014 shows a Cambodian girl sittign with her leg chained to a pillar in her home in Koh Kong province. A four-year-old girl, who have been chained up to eight hours a day for nearly two years by her adopted mother, was rescued, Cambodian police and a rights activist said on July 7, 2014. (Photo by AFP Photo/ADHOC) 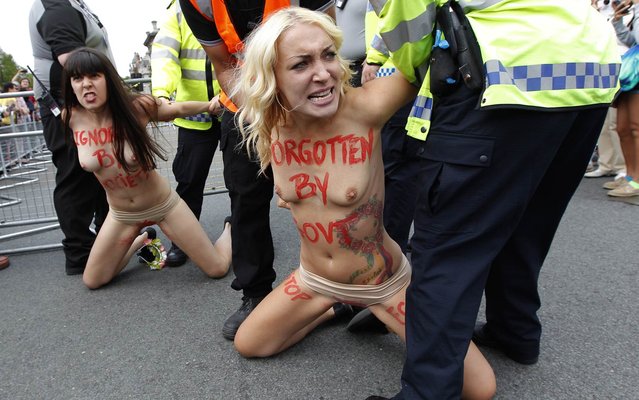 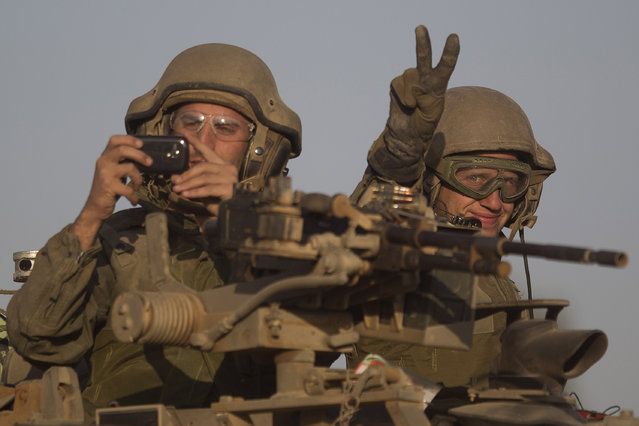 Israeli soldiers ride on a tank to a position near Israel Gaza Border, Thursday, July 10, 2014. With rockets raining deep inside Israel, the military pummeled Palestinian targets Wednesday across the Gaza Strip and threatened a broad ground offensive, while the first diplomatic efforts to end two days of heavy fighting got underway. Egypt, which has mediated before between Israel and the Hamas militant group, said it spoke to all sides about ending the violence. U.S. Secretary of State John Kerry was in touch with Israel to try to lower tensions. And the United Nations chief warned of a “deteriorating situation ... which could quickly get beyond anyone's control”. (Photo by Ariel Schalit/AP Photo) 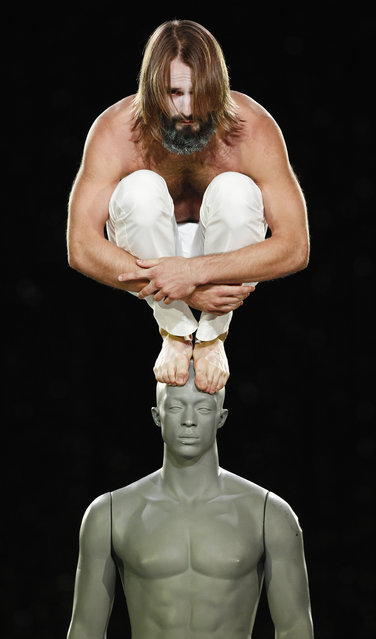 An artist performs on the runway as part of the Marc Cain show during the Mercedes-Benz Fashion Week Spring/Summer 2015 at Erika Hess Eisstadion on July 10, 2014 in Berlin, Germany. (Photo by Peter Michael Dills/Getty Images for Marc Cain) 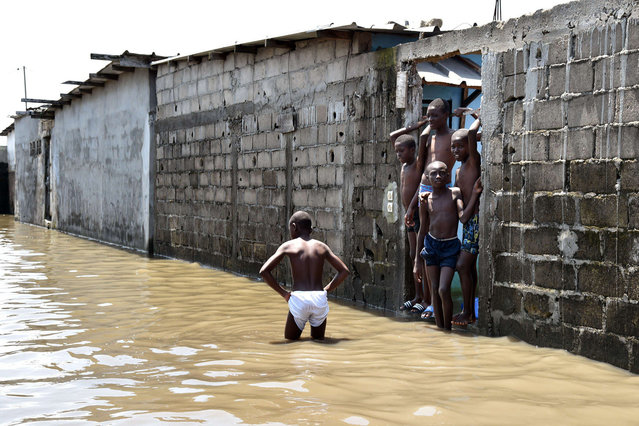 Young boys stand in a street flooded by rain water in the impoverished neighborhood of Adjouffou in Abidjan, Ivory Coast, on July 9, 2014. Several weeks of torrential rainfall in the Ivorian economic capital have left several people dead and caused substantial damage to the city and other areas of the country. (Photo by Issouf Sanogo/AFP Photo) 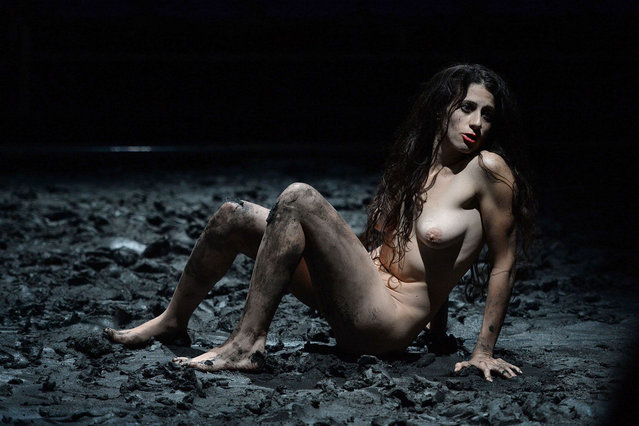 Greek actress Kitty Paitatzoglou performs on July 8, 2014 during the dress rehearsal of the play “Vitrioli”, written by Canadian-born Greek author Yannis Mavritsakis and directed by French director Olivier Py, during the 68th edition of the Avignon Theatre Festival, in Avignon. (Photo by Boris Horvat/AFP Photo) 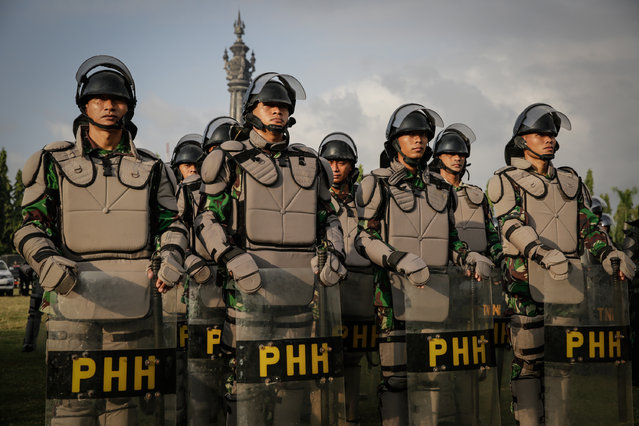 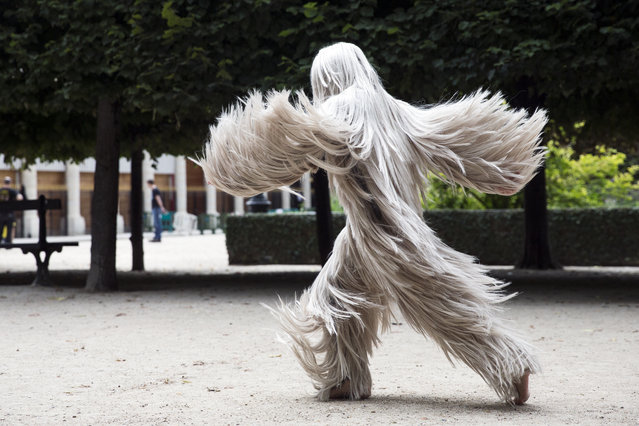 A performer presents a creation from the Haute Coiffure Fall-Winter 2014/15 collection by French designer Charlie Le Mindu during the Paris Fashion Week, in Paris, France, July 7, 2014. The presentation of the Haute Couture collections runs from 06 to 10 July. (Photo by Etienne Laurent/EPA) 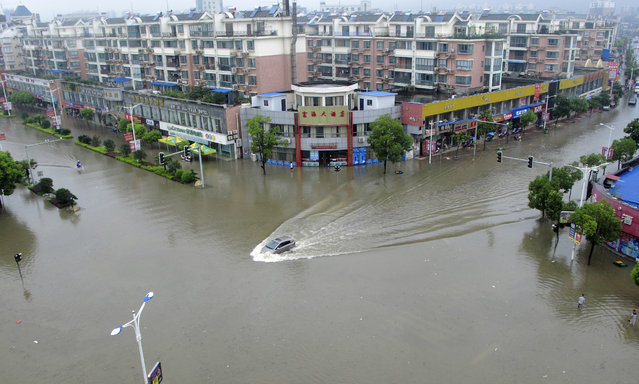 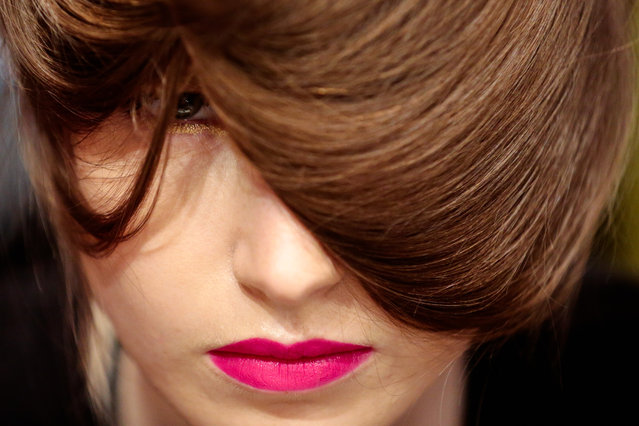 A model gets her hair prepared prior to the presentation of Lena Hoschek's Spring/Summer 2015 collection during the Mercedes Benz Fashion Week in Berlin, Tuesday, July 8, 2014. (Photo by Markus Schreiber/AP Photo) 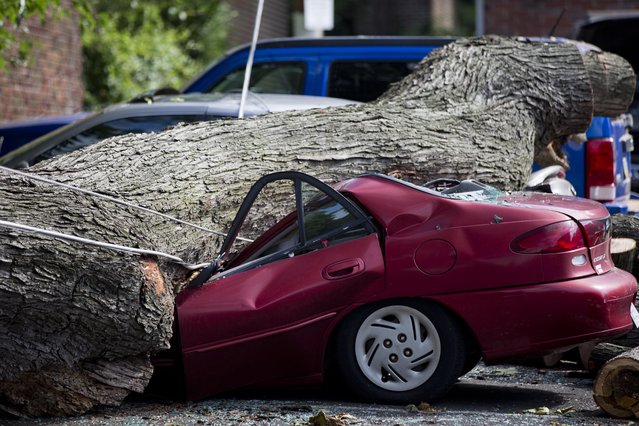 A downed tree lays atop a crushed car Wednesday, July 9, 2014, in Philadelphia. About 228,000 homes and businesses across Pennsylvania remain without power after severe thunderstorms raced across the state. (Photo by Matt Rourke/AP Photo) 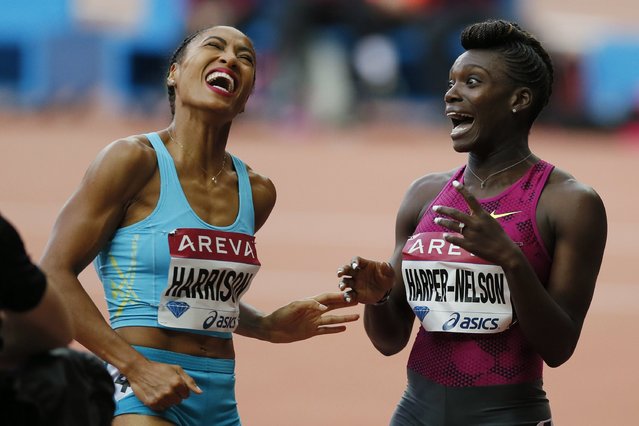 Dawn Harper-Nelson of the U.S. (R) reacts after crossing the finish line, next to compatriot Queen Harrison in the women's 100m hurdles event at the Paris Diamond League meeting at the Stade de France Stadium in Saint-Denis, near Paris, July 5, 2014. (Photo by Gonzalo Fuentes/Reuters) 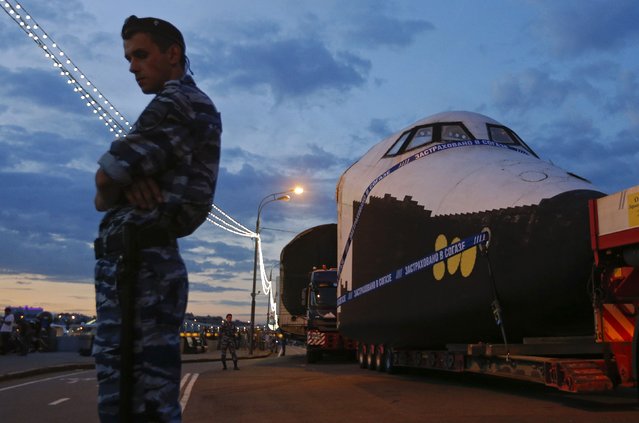 A police officer stands guard in front of a life-sized model of Soviet-made Buran space orbiter, which was moved from Maxim Gorky Central Park for Culture and Recreation to the All-Russia Exhibition Centre (VDNKh) through the streets of Moscow June 5, 2014. While this model was used for tests during the Buran Programme, the actual Buran, the former flagship of the Soviet space fleet, will be placed as a showpiece on one of the squares of VDNKh in Moscow. (Photo by Maxim Shemetov/Reuters) 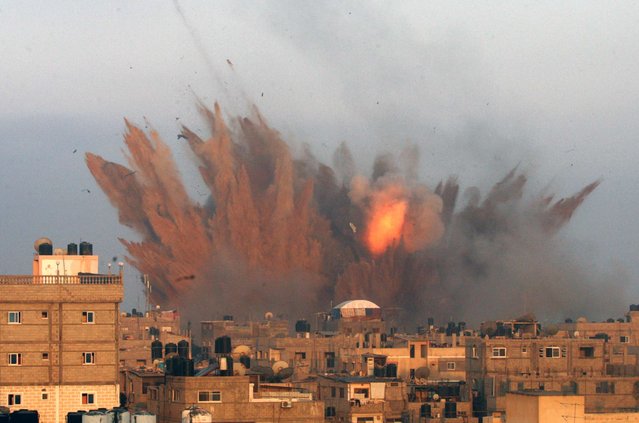 A ball of fire is seen following an Israeli air strike, on July 11, 2014 in Rafah, in the southern of Gaza Strip. Israeli warplanes kept up deadly raids on Gaza but failed to stop Palestinian militants firing rockets across the border, as the United States offered to help negotiate a truce. (Photo by Said Khatib/AFP Photo) 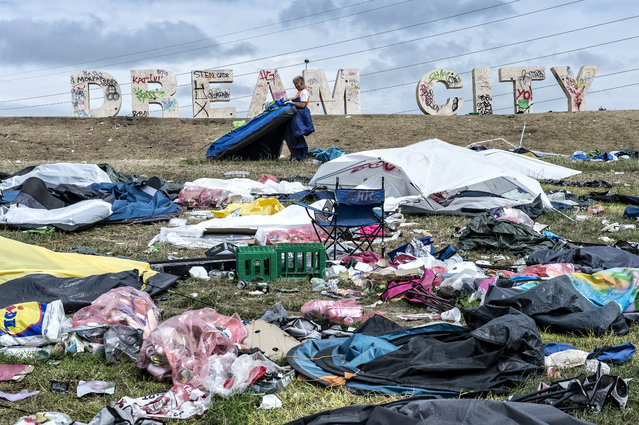 Lots of tents, sleeping bags, air mattresses and waste are left in the camping area of the Roskilde festival, in Roskilde, Denmark, July 7, 2014. The music festival ended on July 6. (Photo by Jens Noergaard Larsen/EPA) 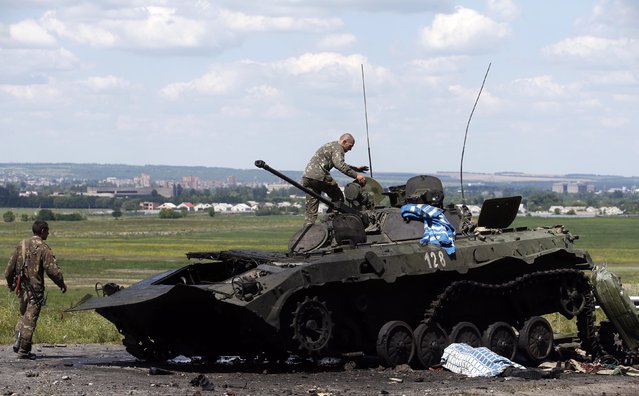 Ukrainian soldiers check a destroyed armoured vehicle at a Ukrainian Army checkpoint in the outskirts of the eastern Ukrainian town of Slaviansk July 5, 2014. Pro-Russian rebels were pulling out of a flashpoint area of eastern Ukraine on Saturday as authorities in Kiev savored a major military success in its three-month fight against the separatists. A Reuters reporter saw a convoy of around 20 military transport vehicles and buses filled with armed rebels driving out of Kramatorsk where they had gone after apparently earlier fleeing the separatist stronghold of Slaviansk nearby. (Photo by Maxim Zmeyev/Reuters) 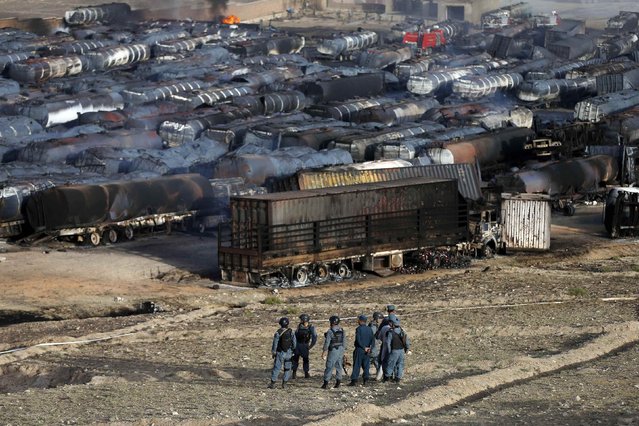 Afghan policemen stand at the site of burning fuel trucks after an overnight attack by the Taliban on the outskirts of Kabul July 5, 2014. Taliban insurgents set fire on Saturday to about 200 oil tanker trucks supplying fuel for NATO forces in an attack just outside the Afghan capital Kabul, police said. (Photo by Mohammad Ismail/Reuters) 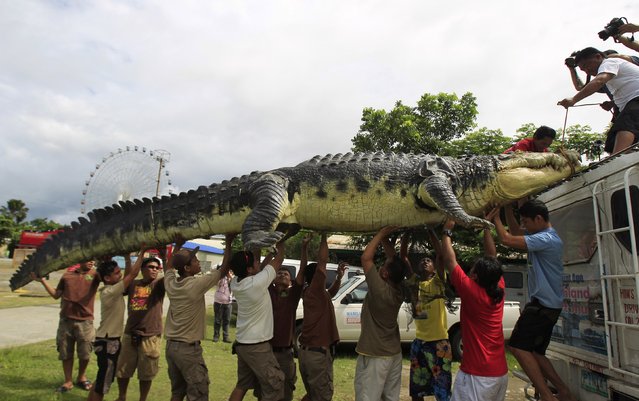 Workers carefully unload 21-foot crocodile robot “Longlong” from the roof of a van, after it reaches Crocodile Park in Pasay city, metro Manila July 5, 2014. The robot, inspired by Lolong, the largest saltwater crocodile to have been in captivity, contains thousands of mechanisms costing around 80,000 pesos ($1,818) and took three months to build by robot experts. (Photo by Romeo Ranoco/Reuters) 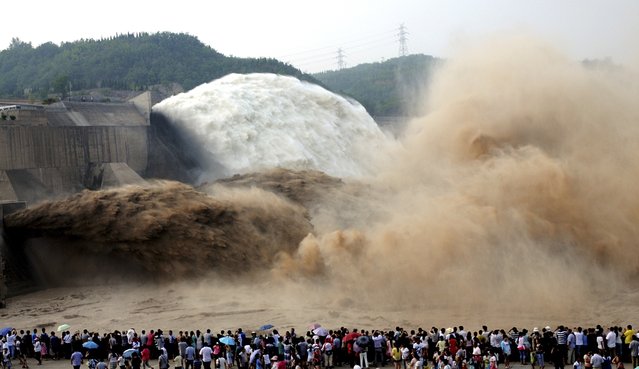 People look on as water gushes from the Xiaolangdi Reservoir section on the Yellow River, during a sand-washing operation in Jiyuan, Henan province July 5, 2014. (Photo by Reuters/Stringer) 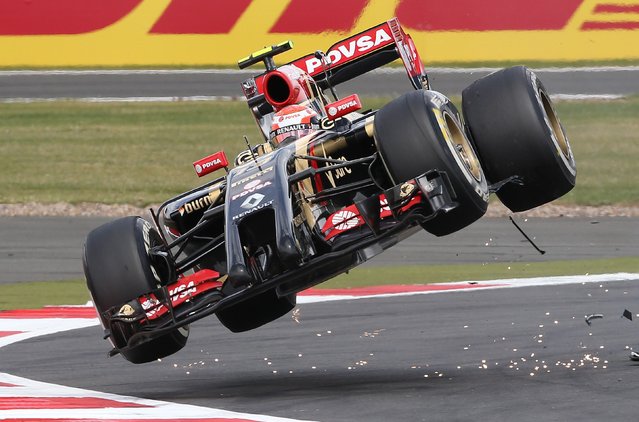 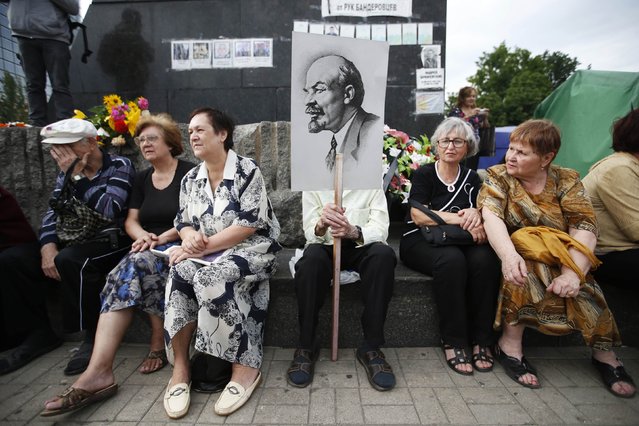 Participants sit beneath a statue of Lenin during a protest against Ukrainian military action held in the centre of the eastern Ukrainian city of Donetsk July 6, 2014. Ukraine's government said it would quickly seize more territory from rebels after re-taking the separatist stronghold of Slaviansk in what President Petro Poroshenko called a turning point in the fight for control of the country's east. (Photo by Maxim Zmeyev/Reuters)
Edit Del
12 Jul 2014 15:26:00, post received 0 comments
Publication archive:
←   →
Popular tags:
All tags
Last searches: