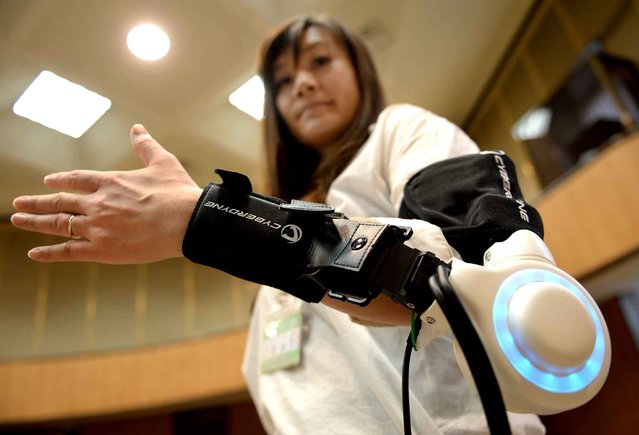 An official of Kawasaki City demonstrates a new powered exoskeleton to assist movement of an arm developed by Japan's robot suit venture Cyberdyne during a press conference in Kawasaki, suburb of Tokyo, on June 18, 2014. Cyberdyne on June 18 teamed up with the major industrial city of Kawasaki in a drive to speed up integration of robotic technology in real society. (Photo by Toru Yamanaka/AFP Photo) 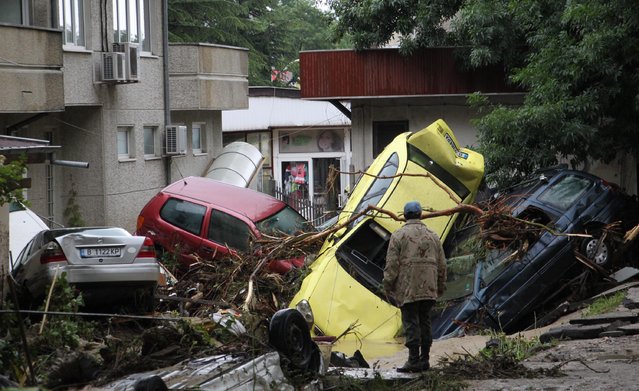 A man looks over piled up cars swept away by severe flooding in the town of Varna, Bulgaria, Friday, June 20, 2014. Bulgarian authorities say ten people have died and several others are missing after heavy rain and flooding hit the Black Sea port city of Varna. Large parts of the Balkan country have been hit by heavy rain and hailstorms, and hundreds of people have been left without electricity and food supplies. (Photo by AP Photo/ImpactPressGroup) 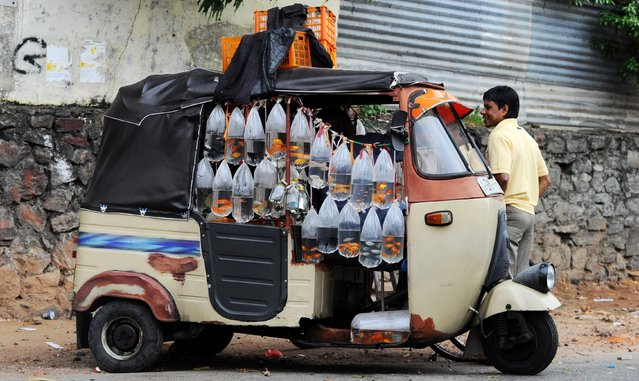 A Sri Lankan freshwater fish street vendor waits for cutomers beside his auto rickshaw with fish in plastic bags hanging from it in Colombo on June 17, 2014. (Photo by Ishara S. Kodikara/AFP Photo) 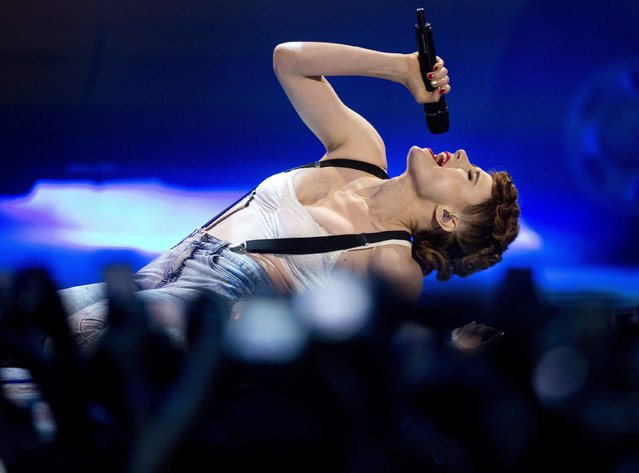 Kiesza performs during the 2014 Much Music Video Awards in Toronto, on June 15, 2014. (Photo by Chris Young/Associated Press/The Canadian Press) 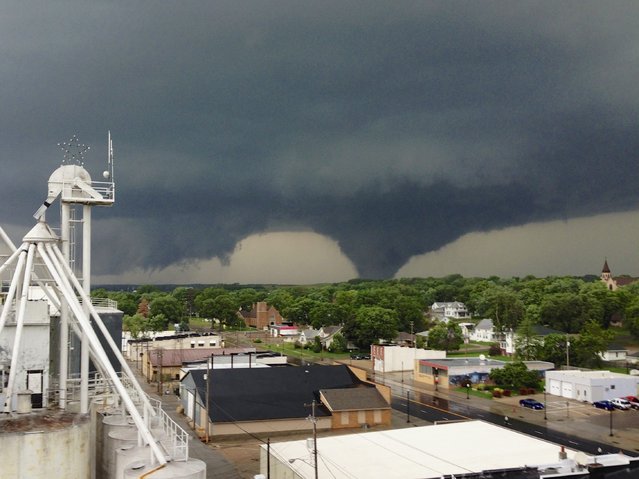 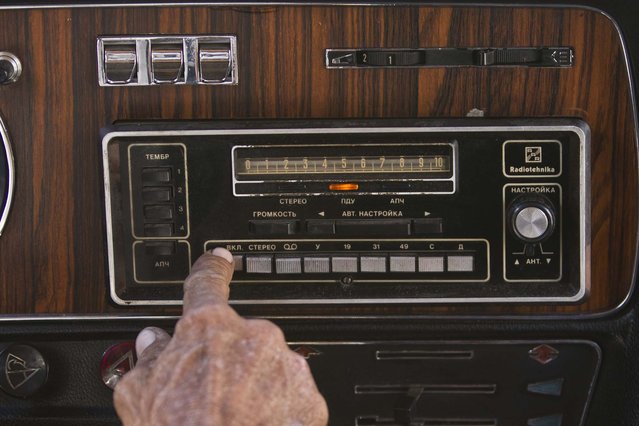 In this June 18, 2014 photo, taxi driver Moises Suarez turns on the radio inside the Soviet-made limousine taxi cab that once belonged to Fidel Castro's fleet which he rents from the government in Havana, Cuba. Many aspects of his GAZ-built “Chaika” – Russian for “seagull” – are original, from the camel-colored headliner to the radio with its buttons and knobs labeled in Cyrillic lettering. (Photo by Franklin Reyes/AP Photo) 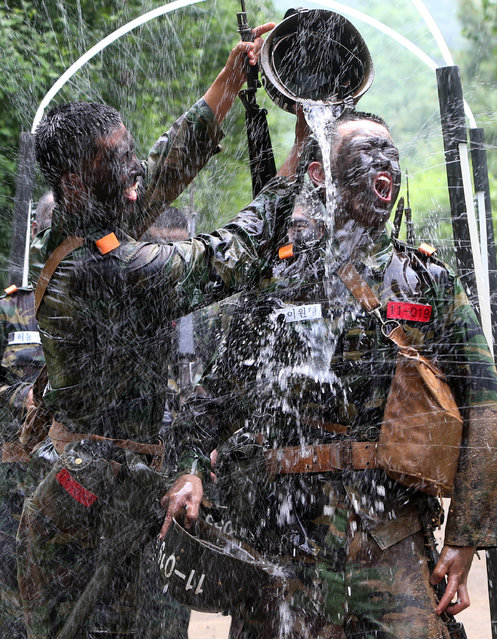 A South Korean army recruit pours water on his fellow recruit to cool off during their training at an Army training Center in Nonsan, South Korea, Friday, June 20, 2014. (Photo by Yang Yong-suck/AP Photo/Yonhap) 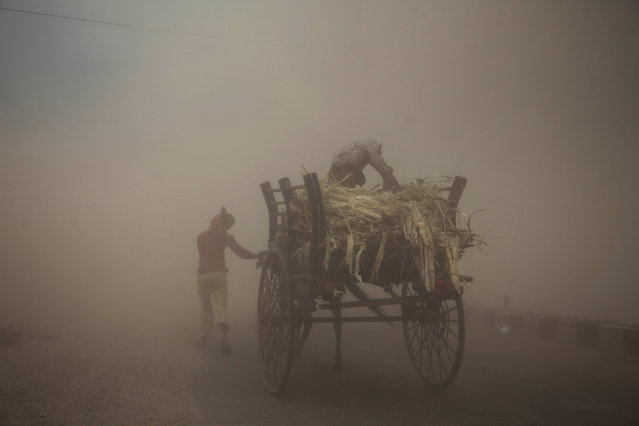 Two men with a horse cart try to make their way during a powerful dust storm in Jammu, India, Monday, June 16, 2014. (Photo by Channi Anand/AP Photo) 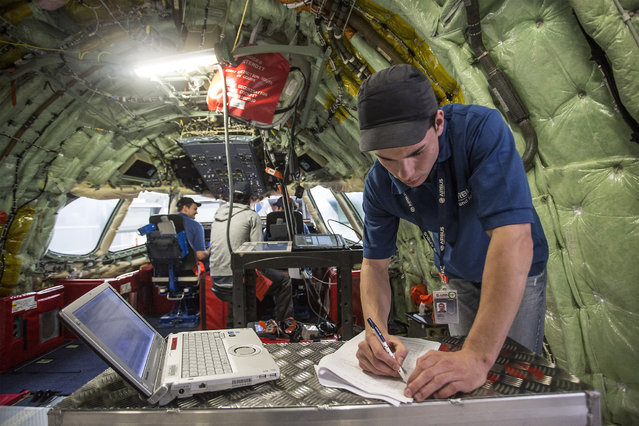 Employees work inside an Airbus A350 XWB aircraft during manufacture at the Airbus Group NV factory in Toulouse, France, on Monday, June 16, 2014. The current European Union (EU) commission is an obstacle to the creation of industry champions, French Economy Minister Arnaud Montebourg stated during a visit to Airbus sites in Toulouse, southwest France, today. (Photo by Balint Porneczi/Bloomberg) 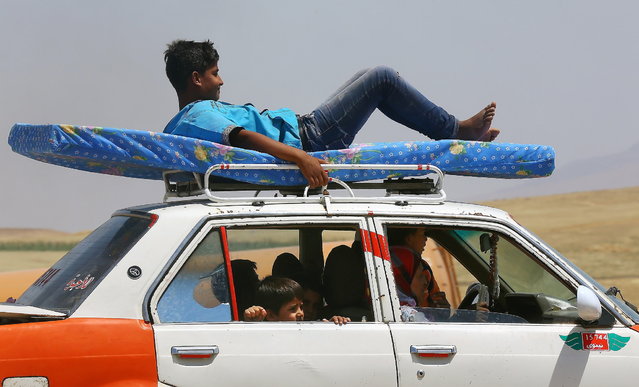 Iraqis who have fled fighting between security forces and al-Qaida inspired militants in their hometown of Tal Afar arrive in a car at Germawa camp for displaced Iraqis, in a hot dusty plain in the largely-autonomous Kurdish area of Dahuk, 260 miles (430 kilometers) northwest of Baghdad Tuesday, June 17, 2014. (Photo by AP Photo) 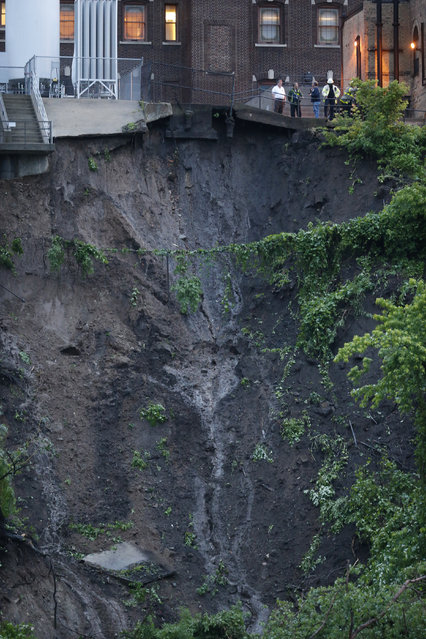 A mudslide on West River Road threatens the University of Minnesota Medical Center Fairview Hospital complex on the West Bank in Minneapolis, Minn., Thursday, June 19, 2014. The Pioneer Press reports 20 administrative employees of the hospital were evacuated as a precaution. Patients were not affected. The mudslide comes after torrential rain and flash flooding in the area Thursday. (Photo by Richard Tsong-Taatarii/AP Photo/The Star Tribune) 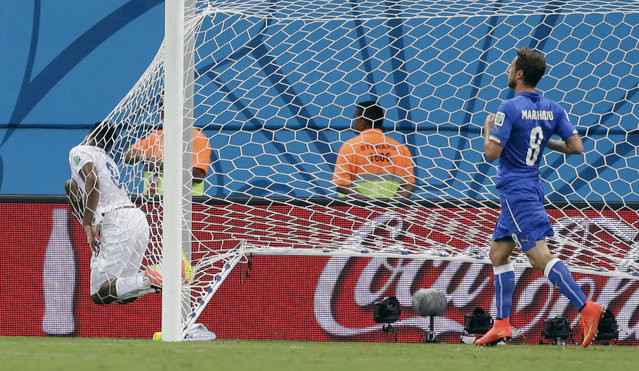 England's Daniel Sturridge, left, lands in the back of the net after missing a chance during the group D World Cup soccer match between England and Italy at the Arena da Amazonia in Manaus, Brazil, Saturday, June 14, 2014. Defending at right is Italy's Claudio Marchisio. (Photo by Matt Dunham/AP Photo) 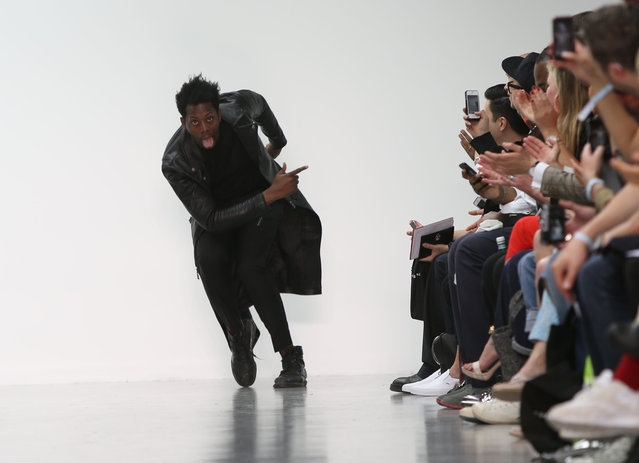 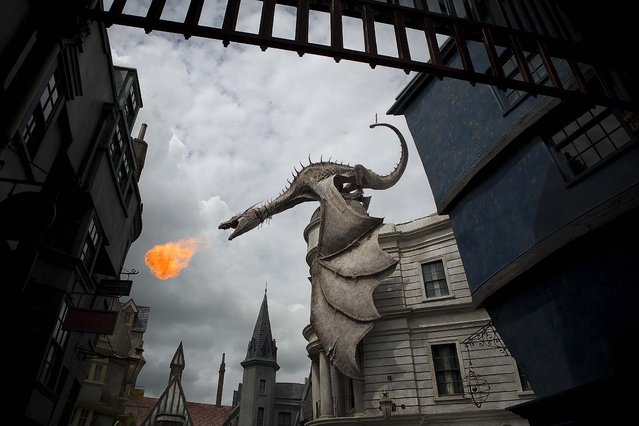 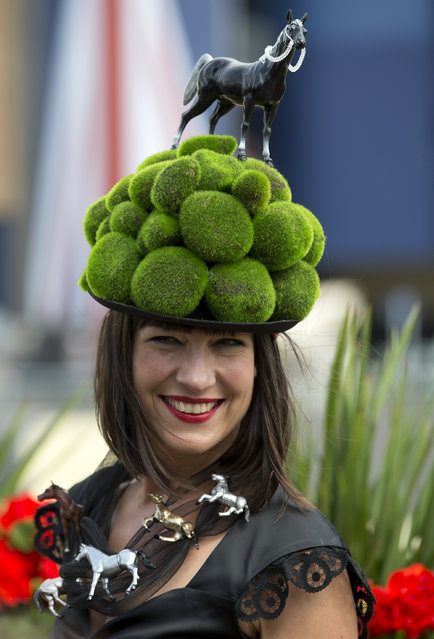 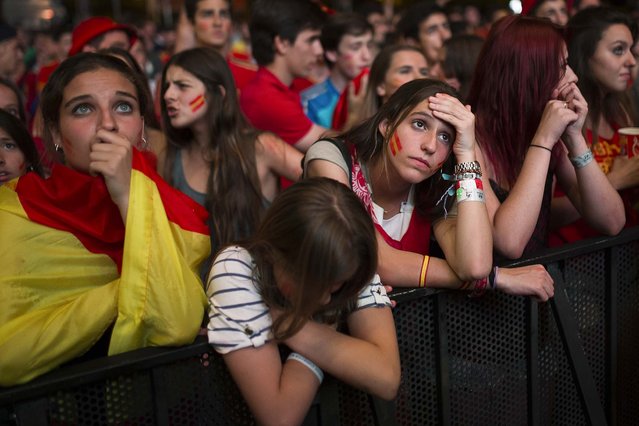 Spanish soccer fans watch their team eliminated from the World Cup by Chile as it is projected on a large screen in Madrid, on June 18, 2014. (Photo by Andres Kudacki/Associated Press) 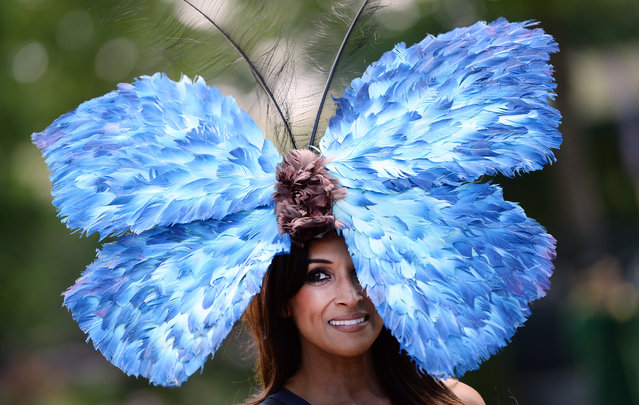 A race-goer shows off her butterfly hat on the opening day of Royal Ascot in London, Britain, June 17, 2014. Royal Ascot runs through June 21. (Photo by Andy Rain/EPA) 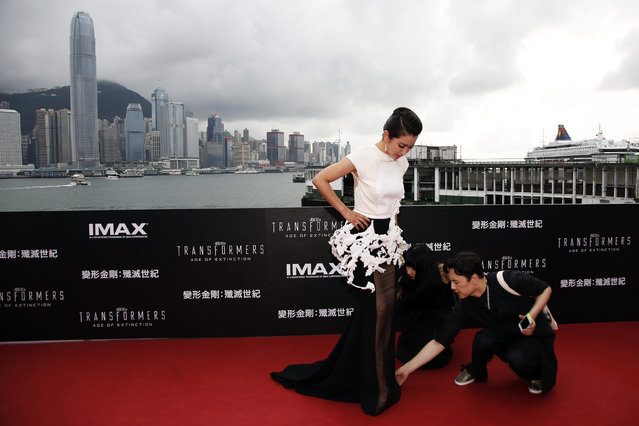 Assistants help to arrange the dress of Chinese actress Li Bingbing on the red carpet as she arrives for the world premiere of the film “Transformers: Age of Extinction” in Hong Kong June 19, 2014. (Photo by Tyrone Siu/Reuters) 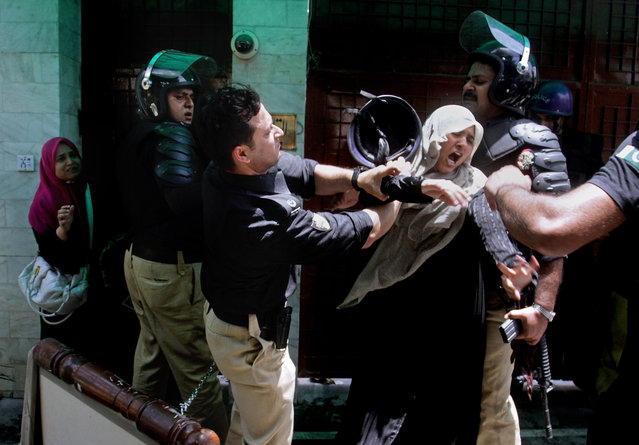 A Pakistani police officer scuffles with a female protester during clashes in Lahore, Pakistan, Tuesday, June 17, 2014. Police clashed Tuesday with followers of an anti-Taliban cleric critical of Pakistan's government in the eastern city of Lahore, violence that killed at least five people, officials said. (Photo by K.M. Chaudary/AP Photo) 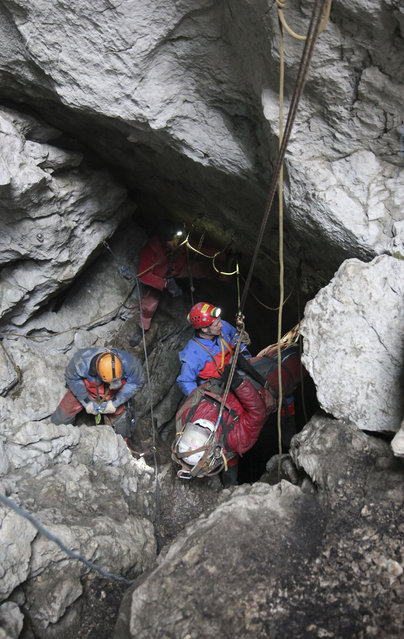