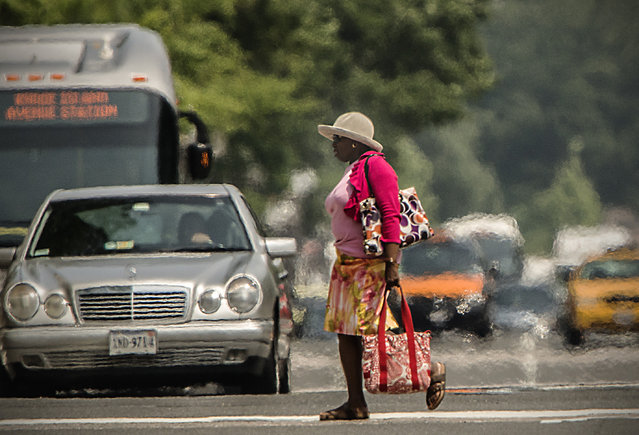 A pedestrian crosses Pennsylvania avenue, shimmering in the heat as temperatures climb to the mid 90's, on June, 18, 2014 in Washington, DC. (Photo by Bill O'Leary/The Washington Post) 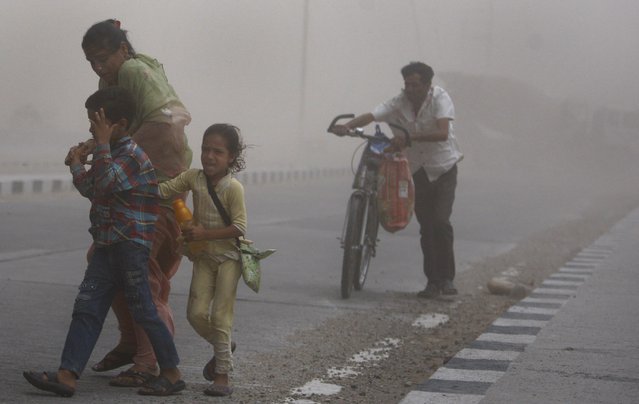 An Indian woman walks with two children, as one of them cries during a powerful dust storm in Jammu, India, Monday, June 16, 2014. (Photo by Channi Anand/AP Photo) 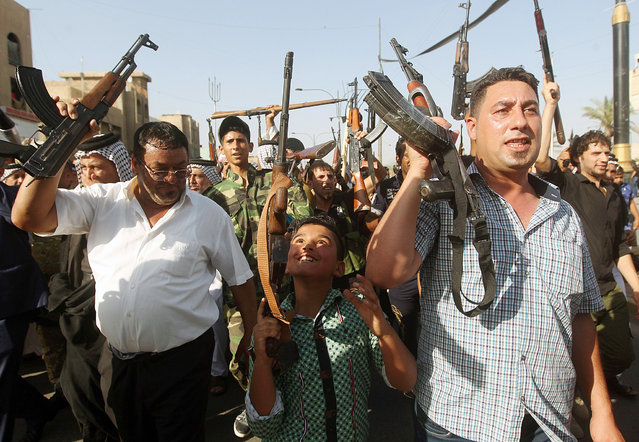 A Iraqi young boy and tribesmen hold up their weapons as they gather to show their readiness to join Iraqi security forces in the fight against Jihadist militants who have taken over several northern Iraqi cities on June 16, 2014 in the capital Baghdad. Faced with a militant offensive sweeping south toward Baghdad, Prime Minister Nuri al-Maliki announced the Iraqi government would arm and equip civilians who volunteer to fight, and thousands have signed up. (Photo by Ahmad Al-Rubaye/AFP Photo) 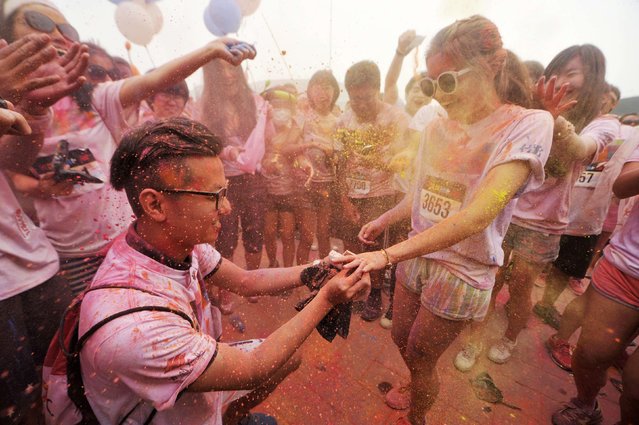 A man (bottom L) propose to his girlfriend as they are sprayed with colour powder during a five-kilometre colour run event in Beijing June 21, 2014. (Photo by China Daily/Reuters) 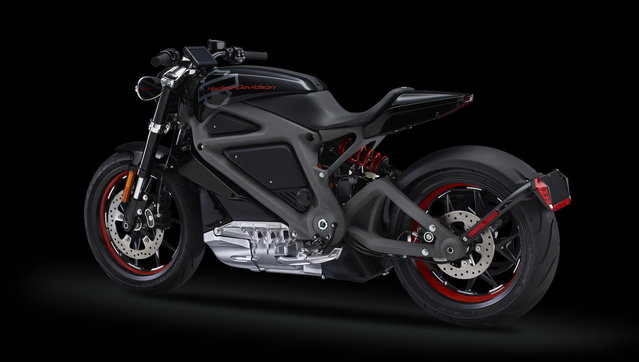 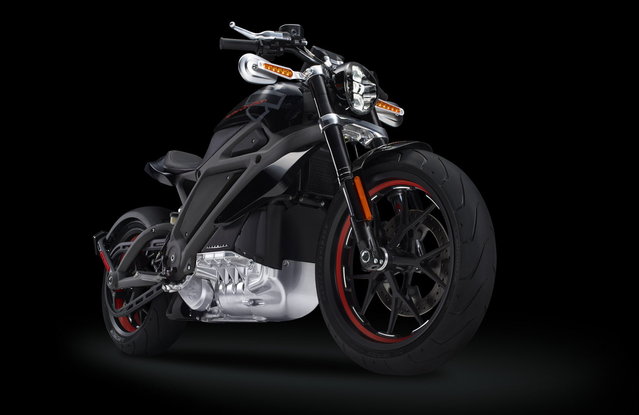 Harley-Davidson introduces an electric motorcycle, LiveWire edition, making it the first major motorcycle manufacturer in the world to offer a full size bike, not a scooter, like this. (Photo by Harley-Davidson Motor Company) 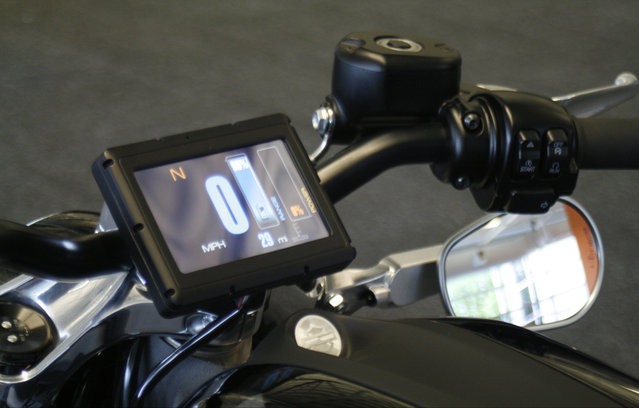 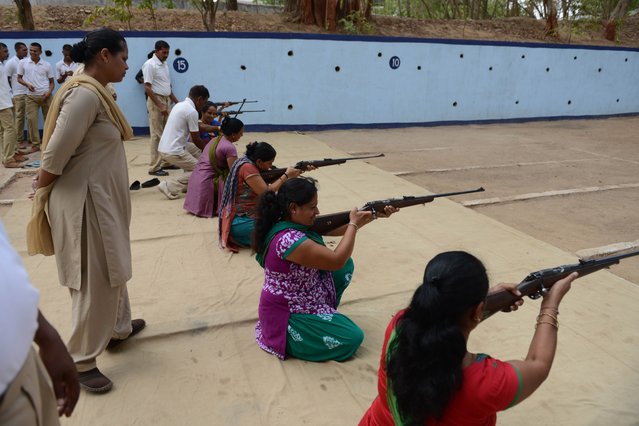 Indian instructors keep watch as participants fire .22 bore rifles during a five-day firearms training programme for women aged 15 and above at the Ahmedabad City Police firing range in Ahmedabad on June 17, 2014. The firearms training programme, organised by the Suraksha Setu initiative, a joint Gujarat state government, police, and rifle training club programme, aims to empower women aged 15 and above with self defence skills. Some 20,500 women across the state are expected to receive instruction in the initiative. (Photo by Sam Panthaky/AFP Photo) 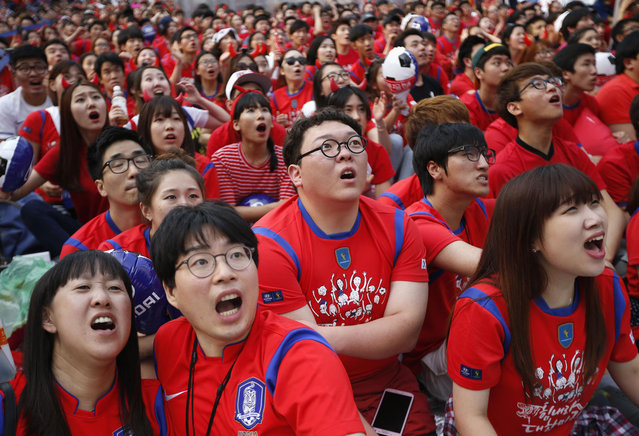 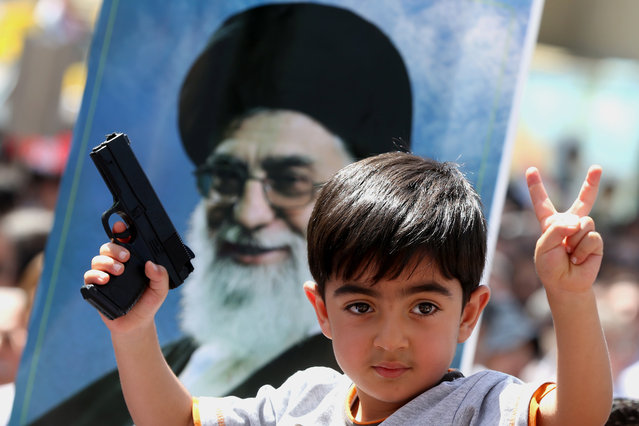 An Iraqi boy living in Iran holds a toy gun and flashes a victory sign in front of a poster of the Iranian Supreme leader Ayatollah Ali Khamenei in a demonstration against Sunni militants of the al-Qaida-inspired Islamic State of Iraq and the Levant, or ISIL, and to support the Grand Ayatollah Ali al-Sistani, Iraq's top Shiite cleric, in Tehran, Iran, Friday, June 20, 2014. (Photo by Ebrahim Noroozi/AP Photo) 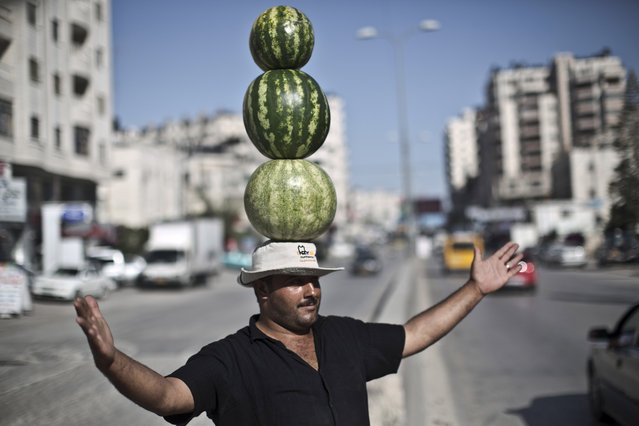 Palestinian fruit vendor Shaher Abu Yamin, 36, poses for a picture while balancing three watermelons on his head in an effort to attract customers, near the West Bank refugee camp of Kalandia, Wednesday, June 18, 2014. (Photo by Muhammed Muheisen/AP Photo) 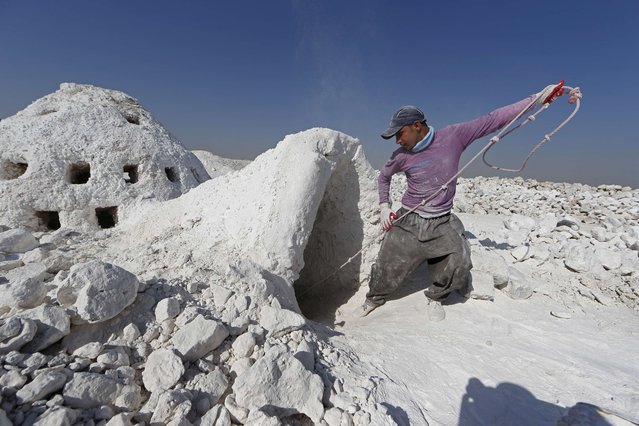 An Iraqi laborer works at a white cement factory in Bartala in the Nineveh province, east of Mosul, on June 17, 2014. Fighting erupted at the northern approaches to Baghdad today as Iraq accused Saudi Arabia of backing militants who have seized swathes of its territory in an offensive the UN says threatens its very existence. (Photo by Karim Sahib/AFP Photo) 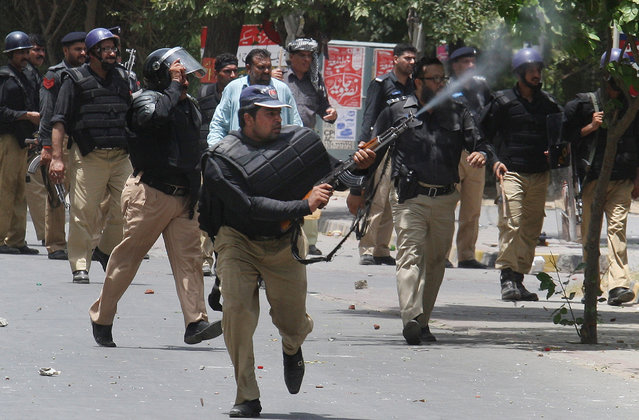 A Pakistani police officer fires his rifle in the air to disperse protestors during clashes in Lahore, Pakistan, Tuesday, June 17, 2014. Police clashed Tuesday with followers of an anti-Taliban cleric critical of Pakistan's government in the eastern city of Lahore, violence that killed at least five people, officials said. (Photo by K.M. Chaudary/AP Photo) 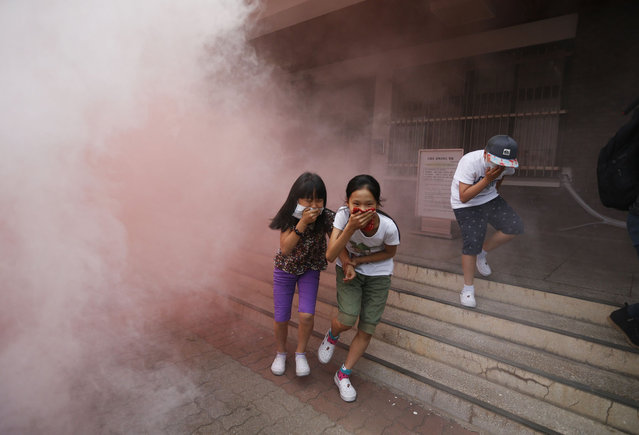 South Korean elementary school students take part in a evacuation exercise as a part of civil defense training in Seoul June 20, 2014. Since the sinking of a ferry that killed hundreds, the training was the biggest safety drill in the country, according to local media. (Photo by Kim Hong-Ji/Reuters) 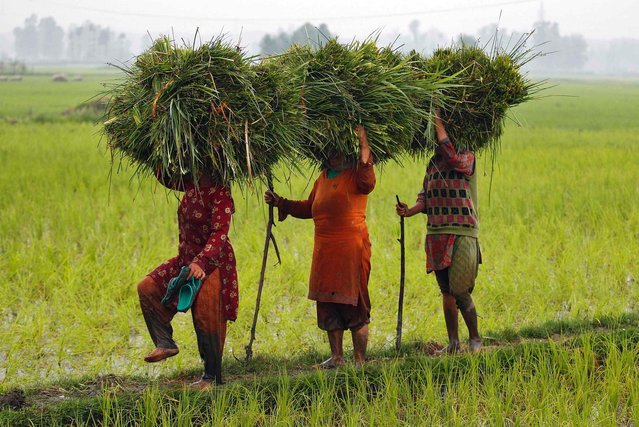 Kashmiri women carry grass as they walk through paddy fields in Srinagar on June 19, 2014. Forecasts of weak monsoon rains that irrigate much of India's food production have added to inflation fears, and volatile vegetable prices have risen by double digits. (Photo by Danish Ismail/Reuters) 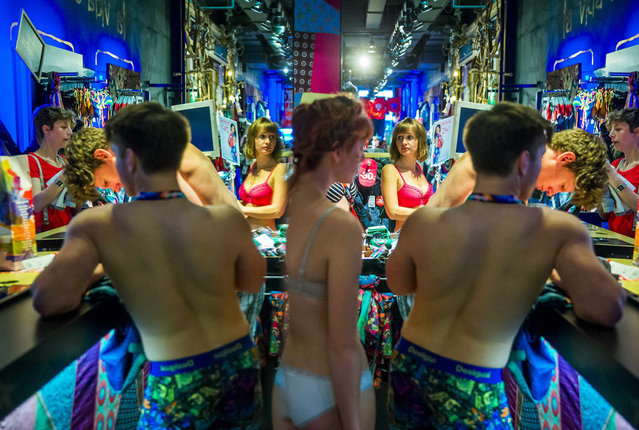 People dressed in underwear run into a store to pick free clothes during a promotional event starting the summer sale at an outlet of the Desigual clothing retailer in Berlin, June 20, 2014. Desigual treated the first 100 customers with a free outfit if they stripped down to their underwear for the first day of the outlet's summer sale. (Photo by Thomas Peter/Reuters) 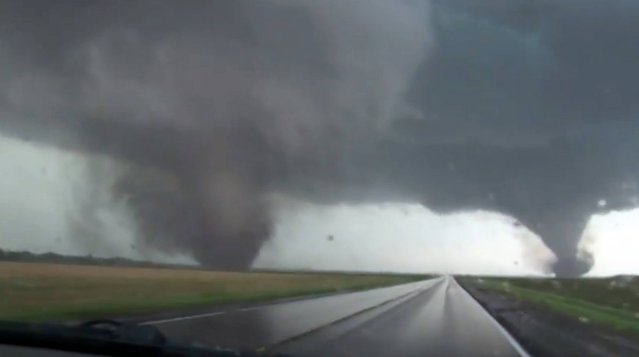 This framgrab taken from video provided by StormChasingVideo.com shows two tornados approaching Pilger, Neb., Monday June 16, 2014. The National Weather Service said at least two twisters touched down within roughly a mile of each other Monday in northeast Nebraska. (Photo by AP Photo/StormChasingVideo.com) 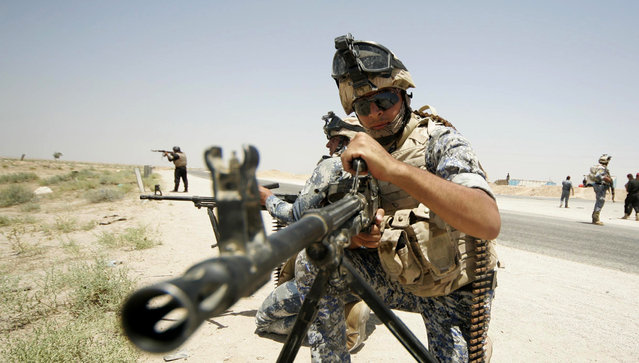 Members of the Iraqi security forces patrol an area near the borders between Karbala Province and Anbar Province, June 16, 2014. The United States said it could launch air strikes and act jointly with its arch-enemy Iran to support the Iraqi government, after a rampage by Sunni Islamist insurgents across Iraq that has scrambled alliances in the Middle East. (Photo by Mushtaq Muhammed/Reuters) 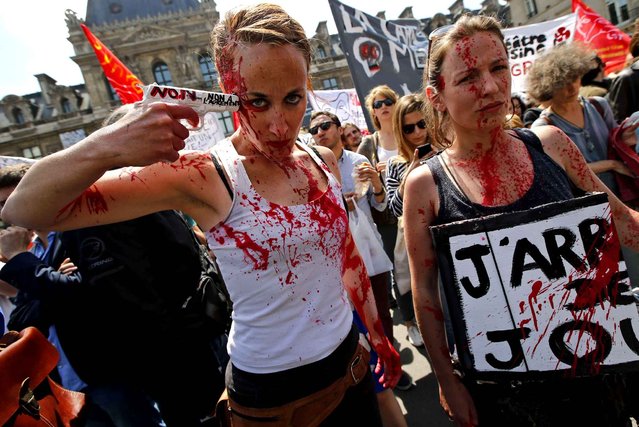 A woman points a plastic gun in a mock suicide as she attends a gathering of part-time and temporary arts workers, known as “intermittents”, to protest over government plans to accept the unemployment insurance agreement in Paris June 16, 2014. Performers, technicians and other casual workers in the French arts world are threatening to step up strikes to thwart the country's top summer festivals in protest at cuts to their unemployment insurance arrangements. France's summer festivals draw hundreds of thousands of visitors and include renowned events such as the Avignon Theatre Festival and Aix-en-Provence's opera festival – both of which were cancelled in 2003 during an earlier bout of strike action. Message on gun reads, “No. We don't approve”. (Photo by Francois Mori/AP Photo) 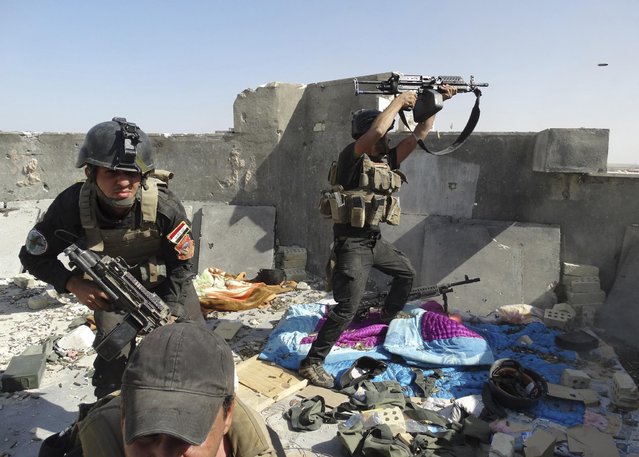 Members of the Iraqi Special Operations Forces take their positions during clashes with the al Qaeda-linked Islamic State of Iraq and the Levant (ISIL) in the city of Ramadi June 19, 2014. (Photo by Reuters/Stringer) 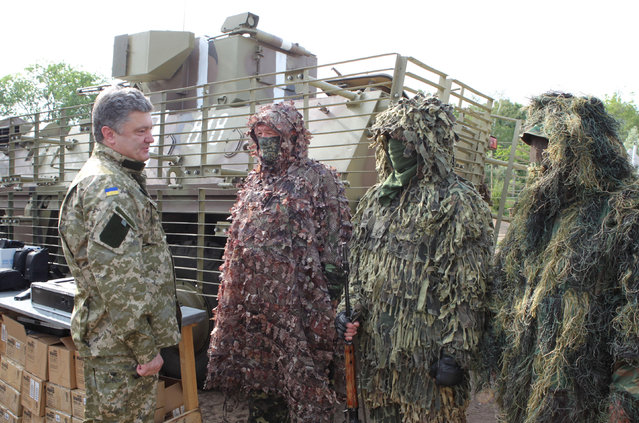 Ukrainian President Petro Poroshenko, left, talks with the Ukrainian soldiers at a military base close to Slovyansk, in the Donetsk region, Ukraine, Friday, June 20, 2014. Clashes between government forces and pro-Russian separatist fighters flared ahead of the publication of a presidential peace plan that includes a unilateral cease-fire. (Photo by Mykhailo Markiv/AP Photo) 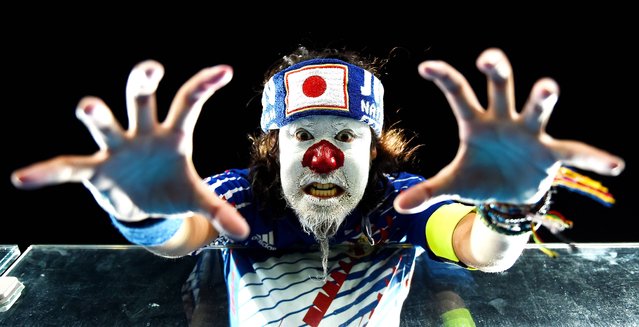