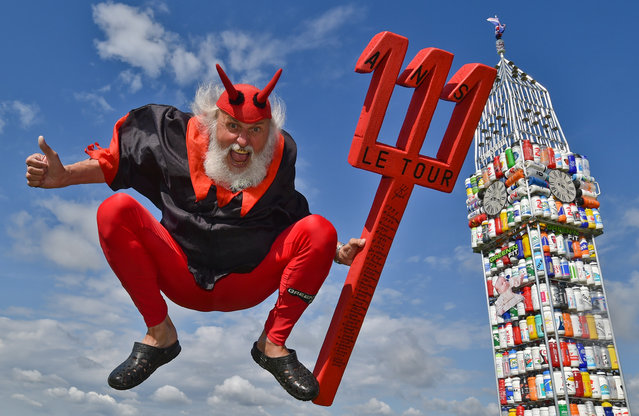 Bicycle designer Dieter “Didi” Senft wears a “Tour Devil” costume as he presents his latest bicycle creation in Storkow, Germany, July 1, 2014. Senft has created a bicycle in the shape of London's Big Ben from 387 drinking bottles on the occasion of this year's Tour de France that starts on 05 July. Senft has been working on extraordinary bike designs for years and holds numerous world records. (Photo by Patrick Pleul/EPA) 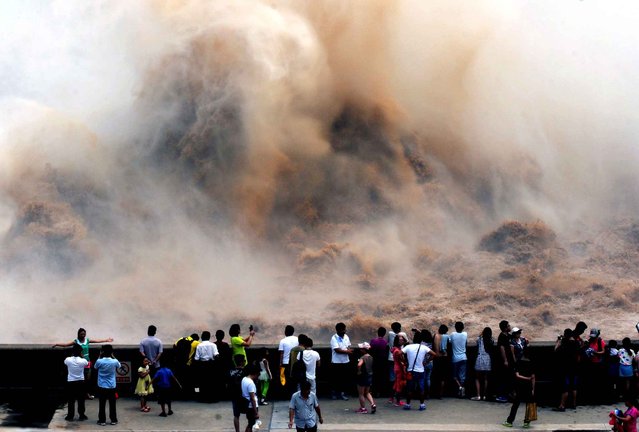 People watch water gushing out from the Xiaolangdi Dam during a silt-washing operation to clear up the sediment-laden Yellow River in Luoyang city, central north Chinas Henan province, 30 June 2014. The Xiaolangdi Dam opened its gates on Monday (30 June 2014) to discharge water from the reservoir to clear up the sediment in the Yellow River, Chinas second-longest waterway. Speeding currents would carry millions of tons of sand into the sea. The Yellow River has been plagued by an increasing amount of mud and sand. Each year, the river bed rises as silt deposits build up, slowing the water flow in the lower reaches. (Photo by Li An/SIPA Press) 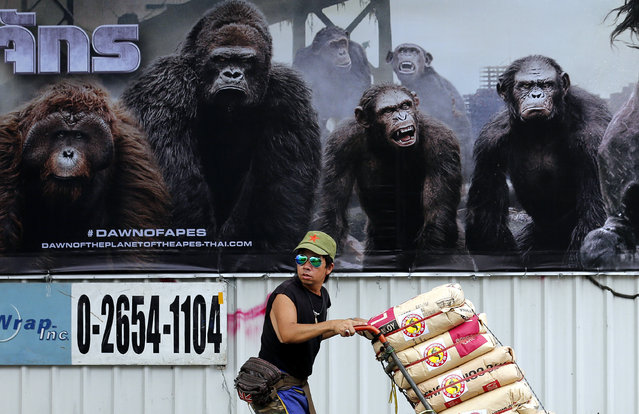 A man pushing goods for sale under a large billboard for the movie “Dawn of the Planet of the Apes”, in the busy streets of the Thai capital Bangkok, Thailand, July 1, 2014. Thailand's ruling military junta, installed in a May 2014 coup d'etat, is focusing on projects to drive the Thai economy upwards and reinstall confidence in the future ahead of elections in 2015. (Photo by Barbara Walton/EPA) 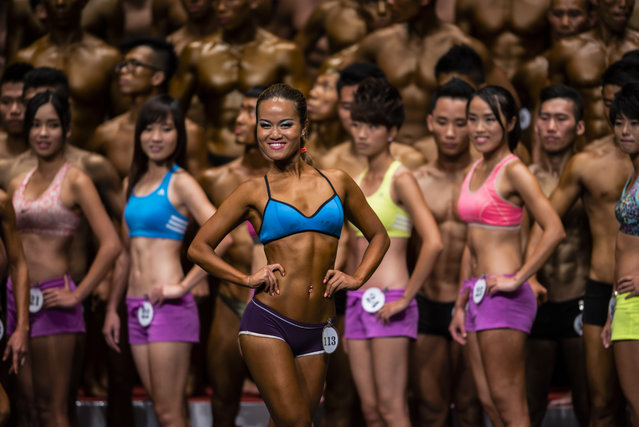 Bodybuilders flexe muscles for judges on stage during the Hong Kong Bodybuilding Championship on June 29, 2014 at the Queen Elizabeth Stadium in Hong Kong, Hong Kong. (Photo by Victor Fraile/Getty Images) 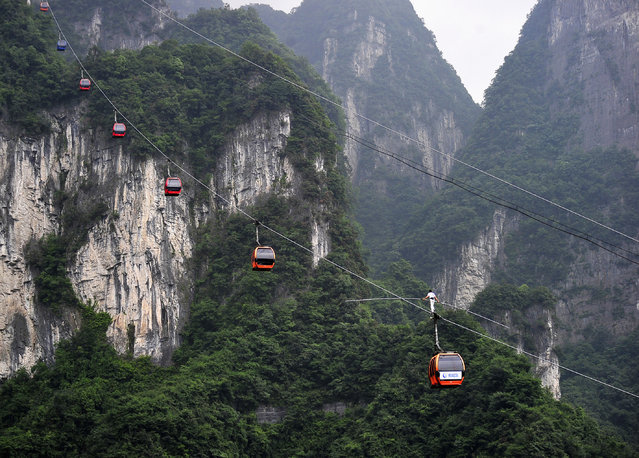 Swiss acrobat Freddy Nock balances on a cableway over a mountain at Tianmen Mountain National Park in Zhangjiajie, Hunan province, June 28, 2014. Nock attempted to walk along the 743 metre long cableway without protection but gave up after 420 metres, for fear of skidding due to the mountain's steep inclination, according to local media. (Photo by Reuters/China Daily) 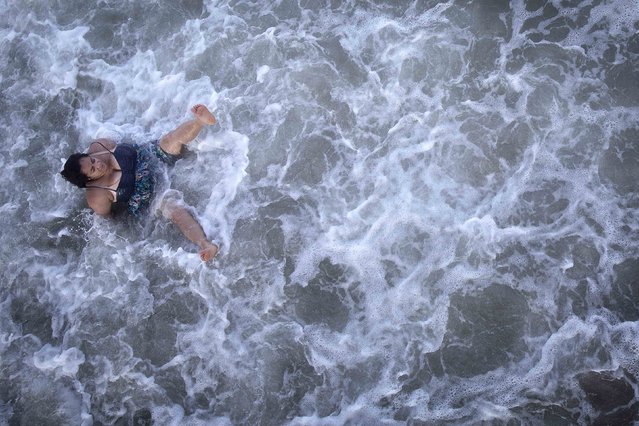 A woman gets knocked over in the surf on Coney Island in the Brooklyn borough of New York, July 2, 2014. Much of the east coast of the US is bracing for a for bad weather as a result of Hurricane Arthur. (Photo by Carlo Allegri/Reuters) 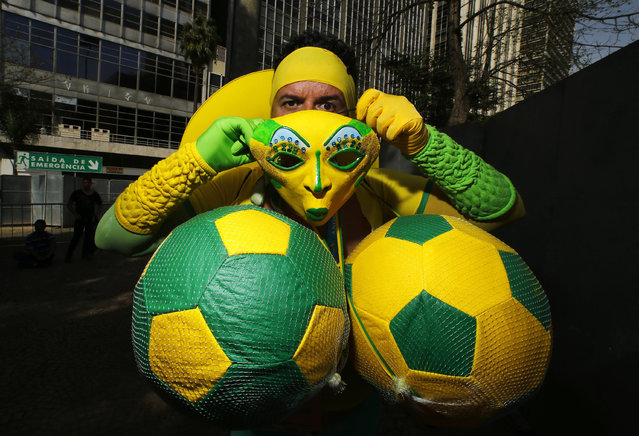 A Brazil fan puts on his costume before watching a telecast of the 2014 World Cup soccer match between Brazil and Chile, at a FIFA fan area in Sao Paulo June 28, 2014. (Photo by Ivan Alvarado/Reuters) 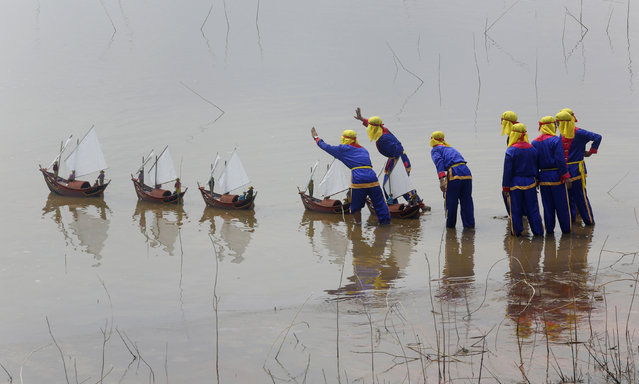 Fishermen from Ly Son island release miniature fishing boat models with artificial soldiers into the water during a re-enactment of the Khao Le The Linh ceremony at a Vietnam Cultural village in Dong Mo, outside Hanoi June 29, 2014. (Photo by Reuters/Kham) 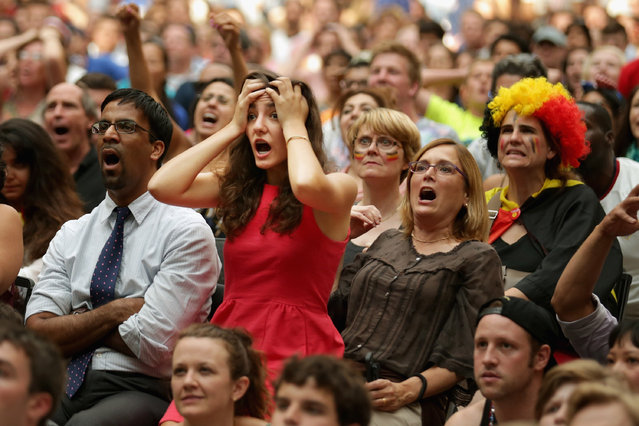 Some of an estimated 1,000 people gather to watch the World Cup soccer match between Belgium and the United States in the Kogod Courtyard of the Smithsonian National Portait Gallery July 1, 2014 in Washington, United States. Belgium won the match 2-1. (Photo by Chip Somodevilla/Getty Images) 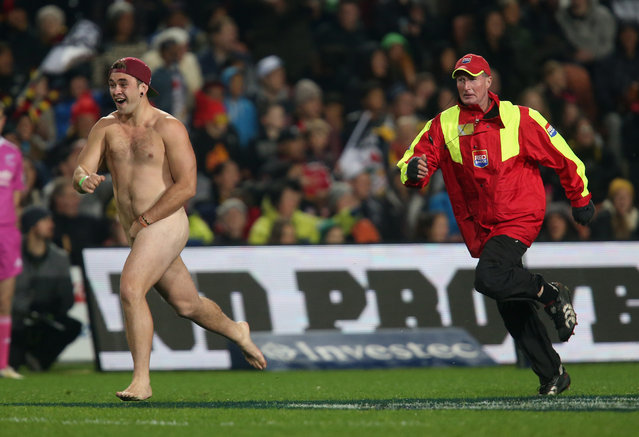 A streaker makes an appearance during the round 18 Super Rugby match between the Chiefs and the Hurricanes at Waikato Stadium on July 4, 2014 in Hamilton, New Zealand. (Photo by Jason Oxenham/Getty Images) 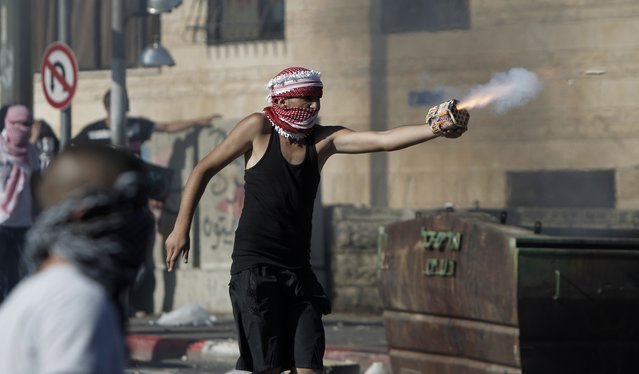 A Palestinian protestor directs fireworks toward Israeli police during clashes in Shuafat neighborhood in Israeli-annexed Arab East Jerusalem, on July 2, 2014, after a Palestinian teenager was kidnapped and killed in an apparent act of revenge for the murder by militants of three Israeli youths. (Photo by Ahmad Gharabli/AFP Photo) 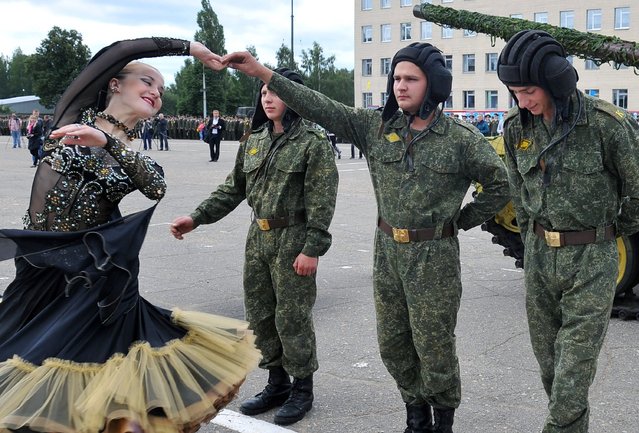 A Belarus cadet holds the hand of a woman while she dances during a graduation ceremony on June 28, 2014 at the Military Academy, outside Minsk. (Photo by Viktor Drachev/AFP Photo) 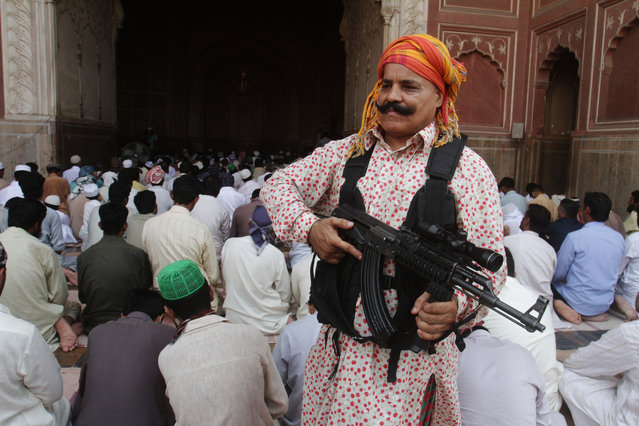 A private security guard stands alert as people offer Friday prayers at the Shahi Mosque in Lahore, Pakistan, Friday, July 4, 2014. Muslims throughout the world are marking the holy month of Ramadan, where they fast from dawn till dusk. (Photo by K.M. Chaudary/AP Photo) 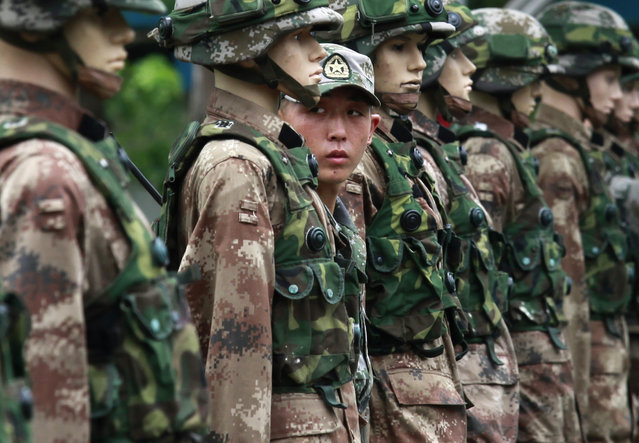 Former US Secretary of State Hillary Clinton looks up at a customer as she signs copies of her new book at Waterstones bookshop on July 3, 2014 in London, England. Mrs Clinton's book entitled 'Hard Choices' is reportedly only selling in small numbers. (Photo by Peter Macdiarmid/Getty Images) 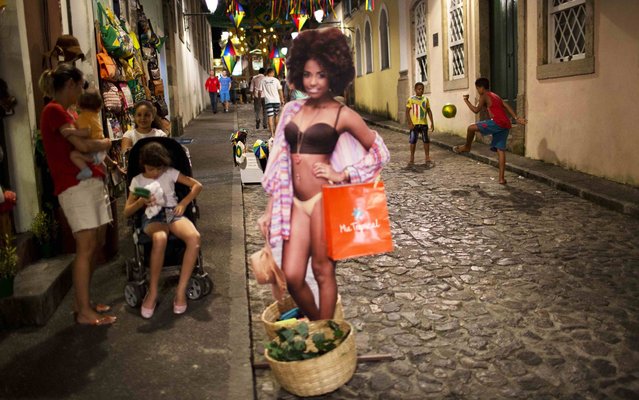 A life-size image of a woman promoting a shop stands in the street where children play soccer in the Pelourinho neighborhood of Salvador, Brazil, Monday, June 30, 2014. Salvador is one of many cities hosting World Cup soccer games. (Photo by Rodrigo Abd/AP Photo) 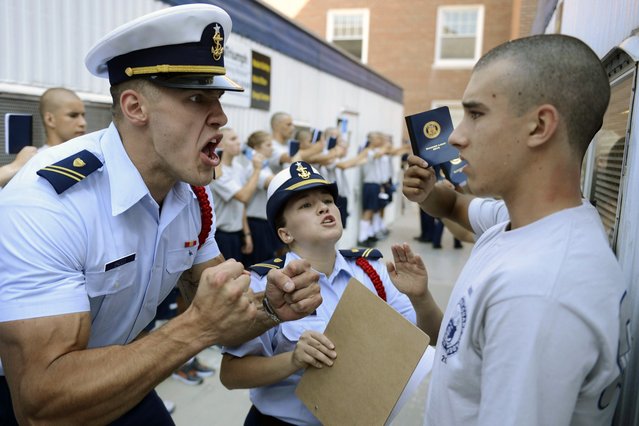 United States Coast Guard Academy Cadets Second Class Aurimas Juodka, left, and Sheila Bertrand get in the face of “swab” Kevin Lennox as Bravo Company finishes at the barber shop and mailroom during R-Day, the reporting-in day that marks the beginning of the 7-week “Swab Summer” for the class of 2018 Monday, June 30, 2014, in New London, Conn. About 250 prospective cadets, Swabs, start the program designed to indoctrinate them to the military life of the academy and at the end will be accepted into the corps of cadets. (Photo by Sean D. Elliot/AP Photo/The Day) 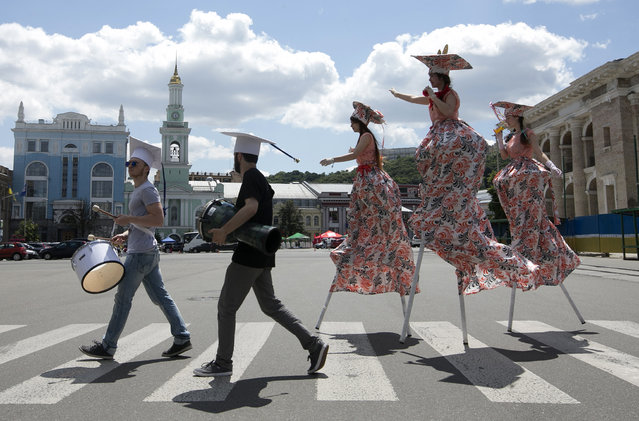 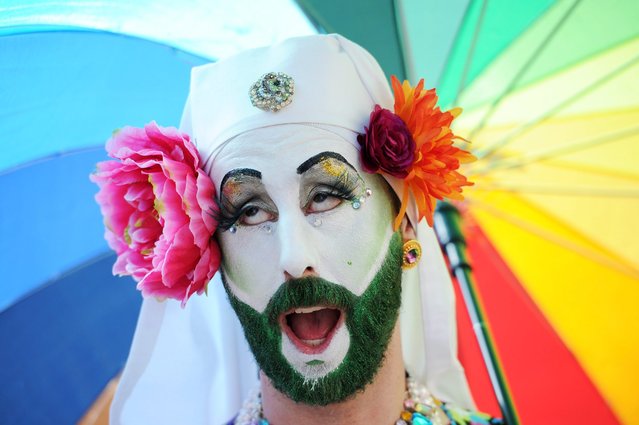 Parade goers celebrate during the WorldPride Parade in Toronto, Ontario June 29, 2014. The parade, which is the culmination of WorldPride 2014, attracts over a million people. (Photo by Kevin Van Paassen/AP Photo/The Canadian Press) Festival goers react after falling over in the mud close to the Pyramid stage at Glastonbury music festival, England, Saturday, June 28, 2014. Thousands of music fans have arrived for the festival to see headliners Arcade Fire, Metallica and Kasabian. (Photo by Joel Ryan/Invision/AP Photo)