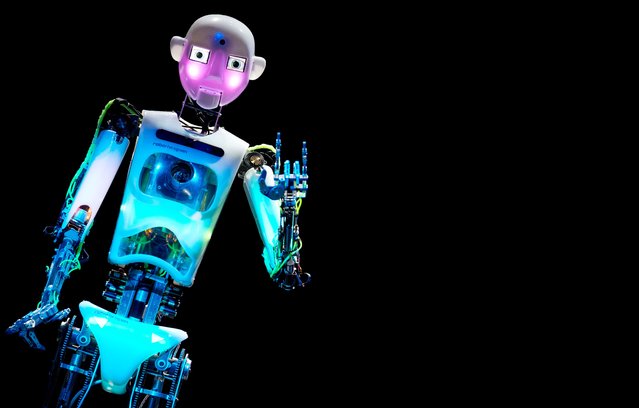 A humanoid robot gestures at the computer expo CeBIT in Hanover, Germany, 10 March 2014. The world's largest computer expo runs from 10 to 14 March 2014. Britain is the official partner country of this year's CeBIT. (Photo by Friso Gentsch/EPA) 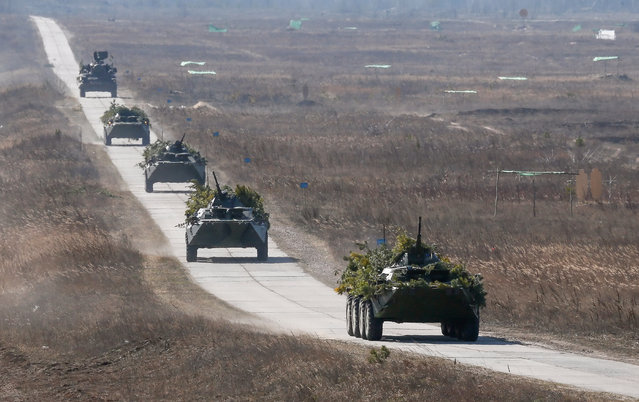 Ukrainian military vehicles drive on a road during a military drill at the military shooting range called Goncharivka, 120 kilometers north-east from Kiev, Ukraine, 14 March 2014. Tanks, helicopters, artillery and paratroopers took part at a complex military exercise, inspected by the Ukraine's acting President Olekasndr Turchynov (not pictured), two days before the Crimean referendum. Ukrainian parliament on 13 March backed a decision to create a new National Guard of 60,000 volunteers, in order to supplement its conventional army forces estimated at 130,000 soldiers. (Photo by Sergey Dolzhenko/EPA) 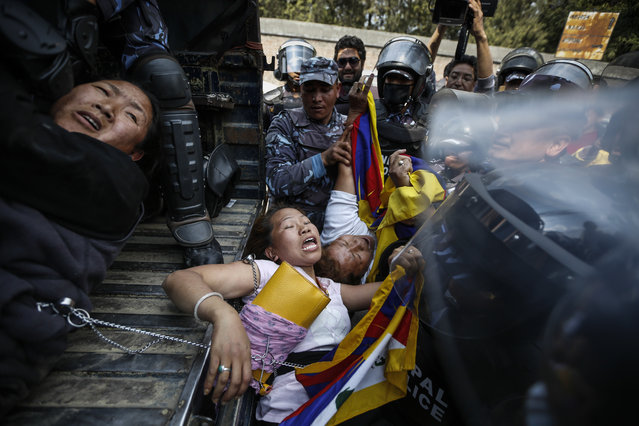 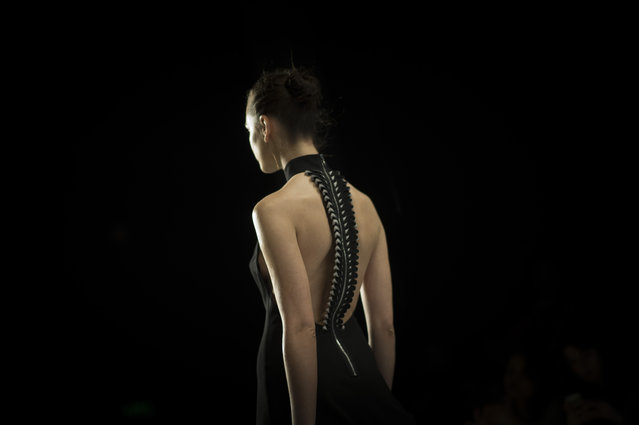 A model walks the runway at the Burce Bekrek show during MBFWI presented by American Express Fall/Winter 2014 on March 14, 2014 in Istanbul, Turkey. (Photo by Timur Emek/Getty Images for IMG) 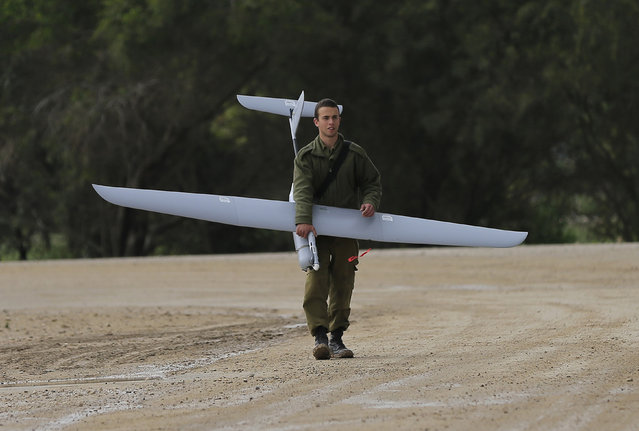 An Israeli soldier carries a drone near the Israel and Gaza border on Thursday, March 13, 2014. Gaza militants resumed rocket fire toward Israel on Thursday, striking the outskirts of two major cities a day after launching the largest barrage since an eight-day Israeli offensive in late 2012. Israel has responded with a series of airstrikes on militant targets. (Photo by Tsafrir Abayov/AP Photo) 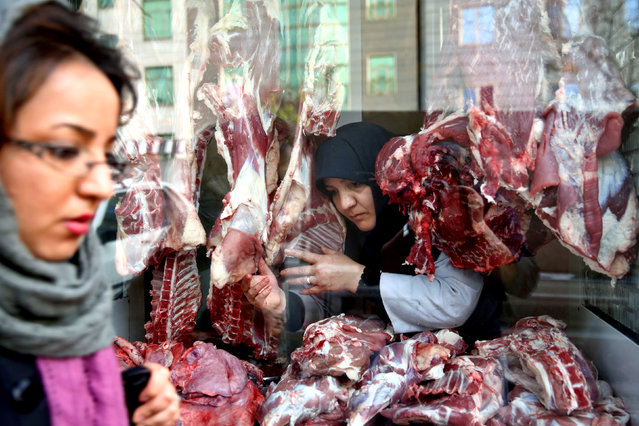 In this Tuesday, March 11, 2014 photo, butcher Zahra Shokouhi, center, works at her shop in downtown Tehran, Iran. Shokouhi, 45, a mother of three girls, learned butchery – a job held traditionally by men in Iranian society – from her husband and by working alongside him. She has surprised many passers-by in the last twelve years while working as a butcher in their shop next to a mosque in a conservative district in south of Tehran. (Photo by Ebrahim Noroozi/AP Photo) 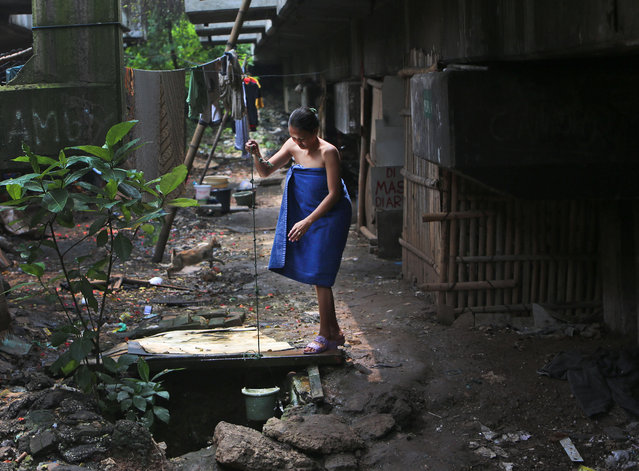 An Indonesian woman collects water for her shower from a well at a slum under a flyover in Jakarta, Indonesia, Thursday, March 13, 2014. Endemic poverty in the country of more than 240 million people remains a major problem and is expected to be a key issue in the presidential election that will be held later this year. (Photo by Tatan Syuflana/AP Photo) 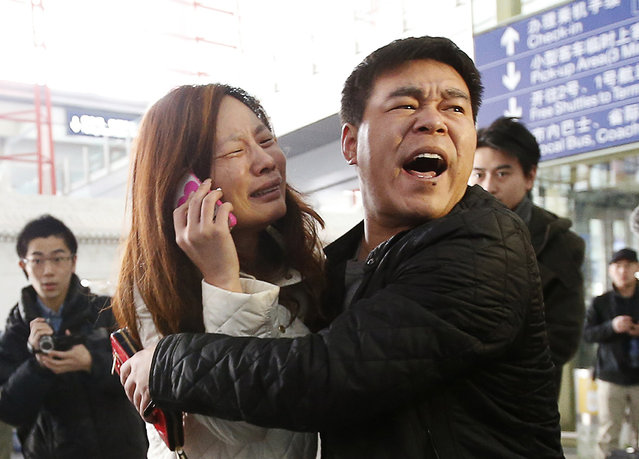 A relative (woman in white) of a passenger onboard Malaysia Airlines flight MH370 cries as she talks on her mobile phone at the Beijing Capital International Airport March 8, 2014. The Malaysia Airlines flight carrying 227 passengers and 12 crew lost contact with air traffic controllers early on Saturday en route from Kuala Lumpur to Beijing, the airline said in a statement. Flight MH 370, operating a Boeing B777-200 aircraft departed Kuala Lumpur at 12.21 a.m. (1621 GMT Friday) and had been expected to land in the Chinese capital at 6.30 a.m. (2230 GMT) the same day. (Photo by Kim Kyung-Hoon/Reuters) 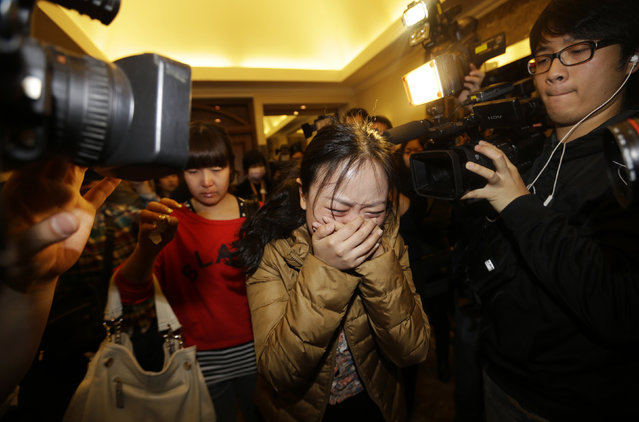 A relative (front) of a passenger of Malaysia Airlines flight MH370 cries as she walks past journalists at a hotel in Beijing March 9, 2014. (Photo by Jason Lee/Reuters) 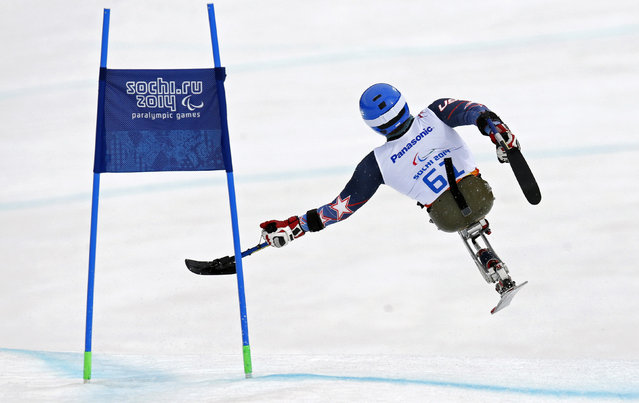 Tyler Walker of the U.S. crashes as he takes a jump during the men's sitting skiing downhill at the 2014 Sochi Paralympic Winter Games at the Rosa Khutor Alpine Center March 8, 2014. (Photo by Christian Hartmann/Reuters) 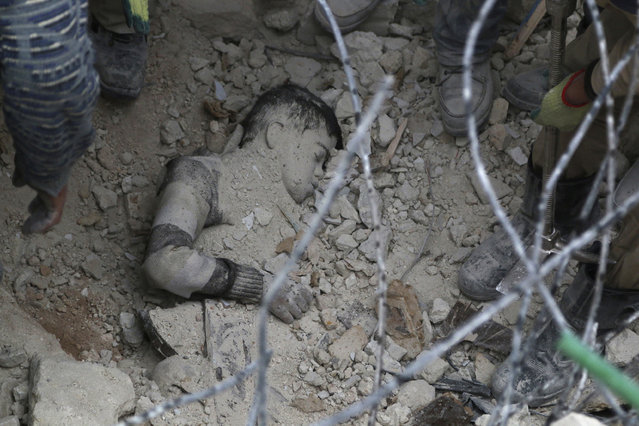 Men try to pull a body from under the rubble at a site hit by what activists said was shelling by forces loyal to Syria's President Bashar al-Assad in Aleppo's district of al-Sukari March 8, 2014. (Photo by Hosam Katan/Reuters) 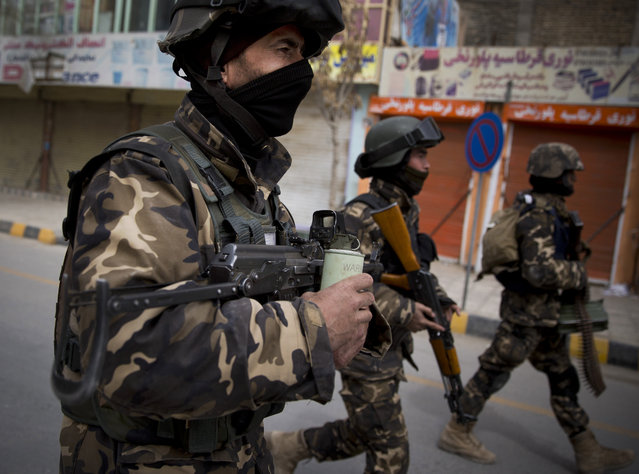 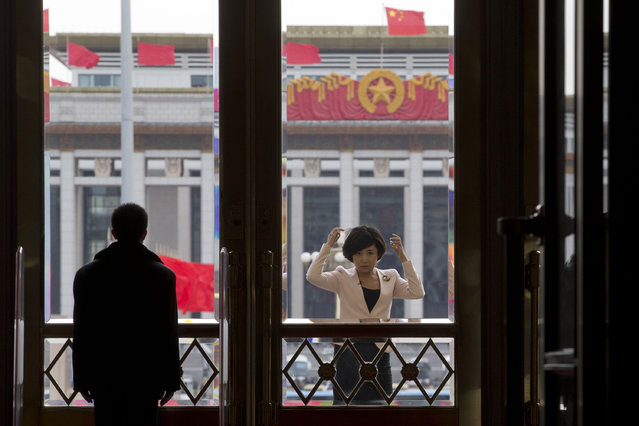 A television presenter adjusts her hair near a security person guarding the entrance to the Great Hall of the People where the closing ceremony of the Chinese People's Political Consultative Conference is held in Beijing, China, Wednesday, March 12, 2014. (Photo by Ng Han Guan/AP Photo) 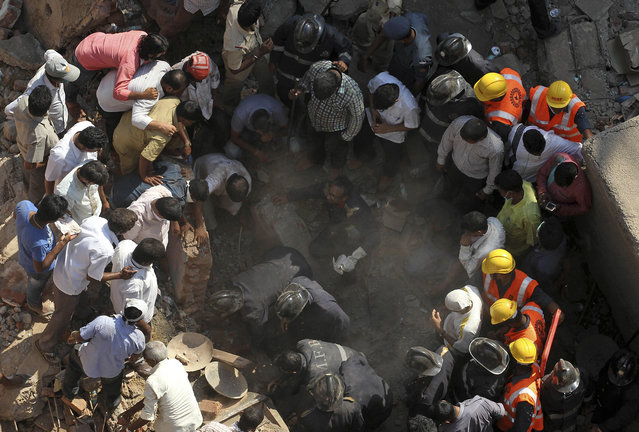 Rescue workers search for survivors in the debris of a building that collapsed in Mumbai, India, Friday, March 14, 2014. A seven-story residential building collapsed Friday in a Mumbai suburb and up to 10 people may be trapped under the debris, Indian officials said. (Photo by Rafiq Maqbool/AP Photo) 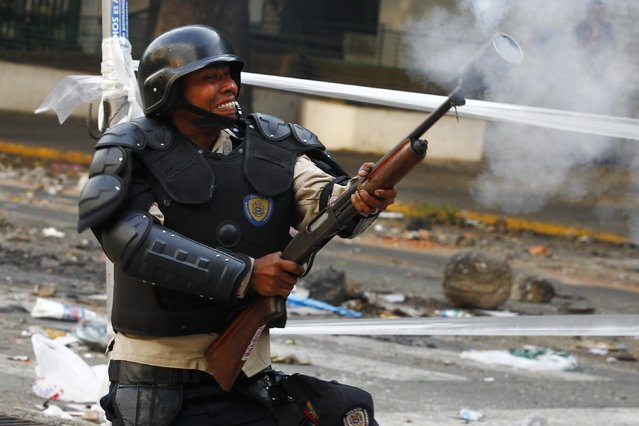 A riot policeman shoots tear gas at anti-government protesters during a protest in Caracas March 8, 2014. Latin American foreign ministers will meet next week to discuss the unrest in Venezuela that has left at least 20 dead and convulsed the South American OPEC nation, diplomatic sources said on Friday. (Photo by Carlos Garcia Rawlins/Reuters) 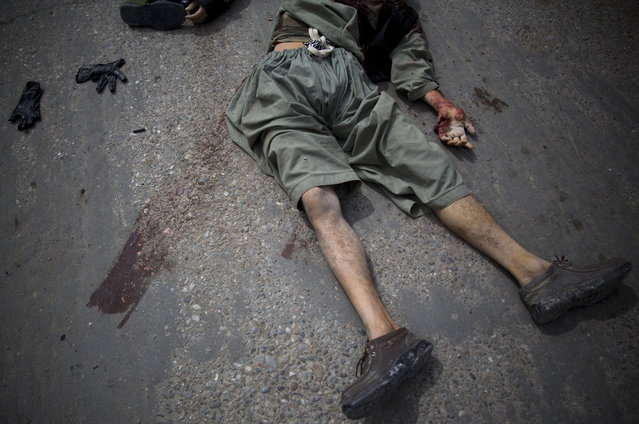 A dead suicide bomber lies on the street in the center of Kandahar, Afghanistan, Wednesday, March 12, 2014, after an attack on the former Afghan intelligence headquarters. Police officials said three insurgents who tried to storm the former headquarters of Afghanistan’s intelligence service in southern Kandahar died in a gunbattle with security forces. (Photo by Anja Niedringhaus/AP Photo) 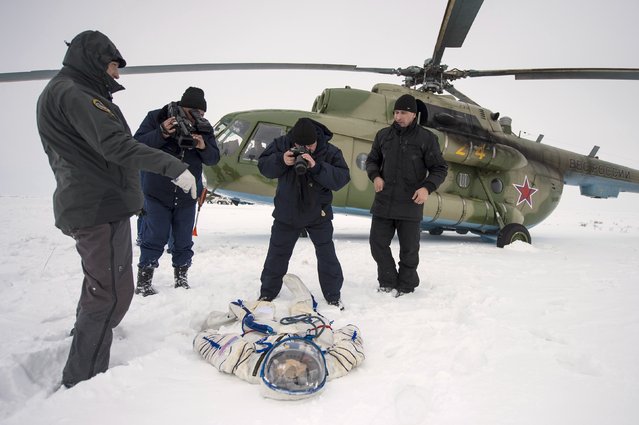 A photographer and an operator document the suit worn byAstronaut Michael Hopkins from NASA after the landing of the Soyuz TMA-10M capsule in a remote area southeast of the town of Zhezkazgan in central Kazakhstan, March 11, 2014. An American astronaut and two Russians who carried a Sochi Olympic torch into open space landed safely and on time on Tuesday in Kazakhstan, defying bad weather and ending their 166-day mission aboard the International Space Station (ISS). Inside the capsule were former ISS commander Oleg Kotov and flight engineers Sergei Ryazansky and Michael Hopkins from NASA. The trio launched together into space on September 25. (Photo by Bill Ingalls/Reuters/NASA) 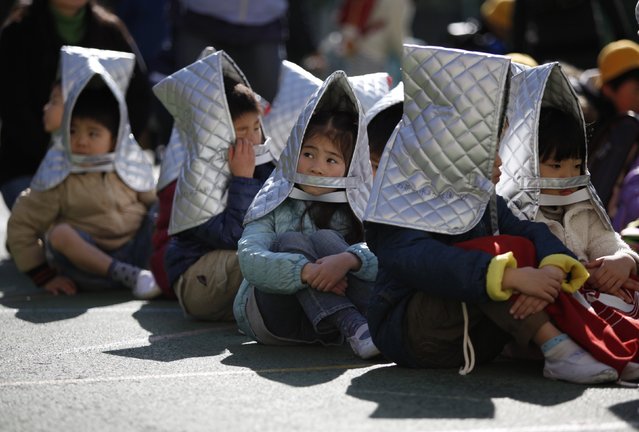 Kindergarten students sit in a playground during an earthquake simulation exercise at an elementary school in Tokyo March 11, 2014. Schools in Chiyoda ward, one of the central wards in Tokyo, held an annual evacuation drill to prepare for a major earthquake in Tokyo, at the day of the third anniversary of the March 11, 2011 earthquake and tsunami that killed thousands. (Photo by Yuya Shino/Reuters) 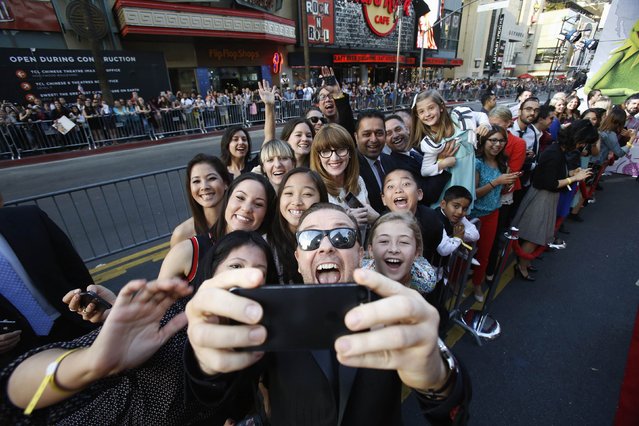 Cast member Ricky Gervais takes a “selfie” with some fans at the premiere of “Muppets Most Wanted” at El Capitan theatre in Hollywood, California March 11, 2014. The movie opens in the U.S. on March 21. (Photo by Mario Anzuoni/Reuters) 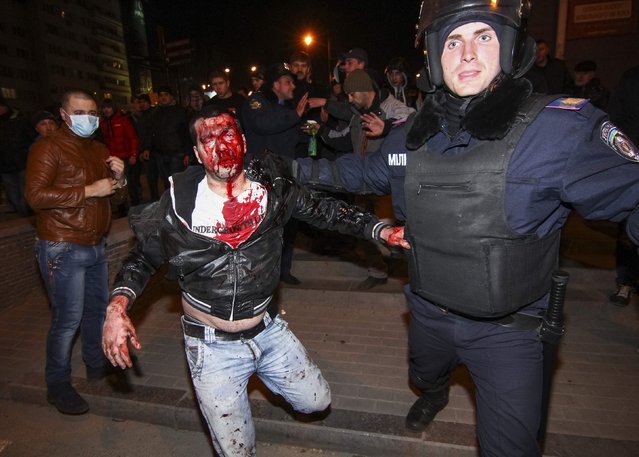 A police officer escorts a wounded participant of an anti-war rally during clashes with pro-Russian demonstrators in Donetsk March 13, 2014. One person was killed and several were treated for injuries in hospital on Thursday when hundreds of Ukrainian demonstrators clashed in the eastern city of Donetsk, the local health authority said. (Photo by Reuters/Stringer) 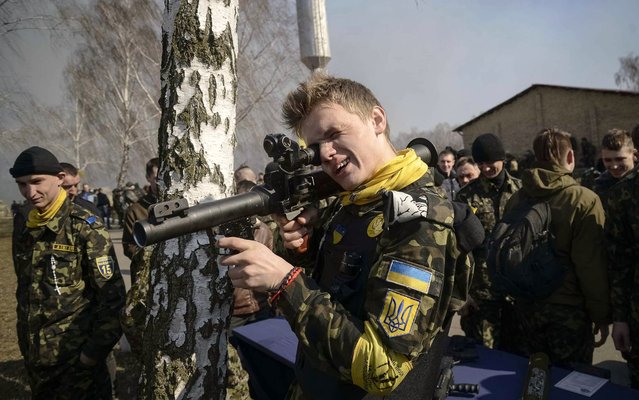 Members of a “Maidan” self-defense battalion takes part in weapons training at a Ukrainian Interior Ministry base near Kiev March 14, 2014. (Photo by Maks Levin/Reuters) 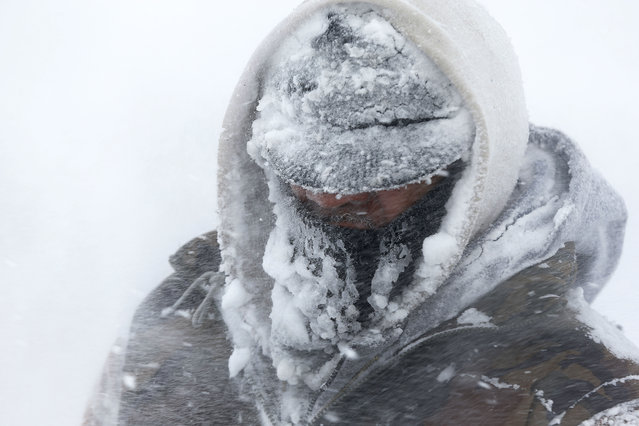 Daniel Davis is covered in snow and ice while clearing a sidewalk during a snow storm in Detroit Wednesday, March 12, 2014. The storm will likely move the Detroit area close to the seasonal snow total of 93.6 inches set in 1880-1881, according to the National Weather Service. (Photo by Paul Sancya/AP Photo) Robot “Charlie” of the German Research Center for Artificial Intelligence (DFKI) is on display at the CeBIT fair in Hanover, Germany, March 13, 2014. Great Britian is this year's partner country. The fair runs until March 14, 2014. (Photo by Christoph Schmidt/EPA) 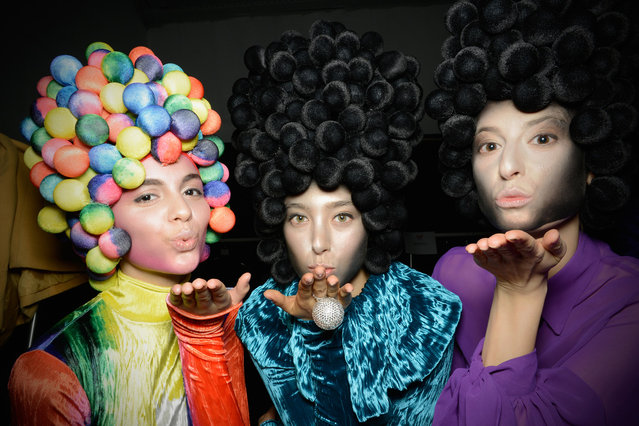 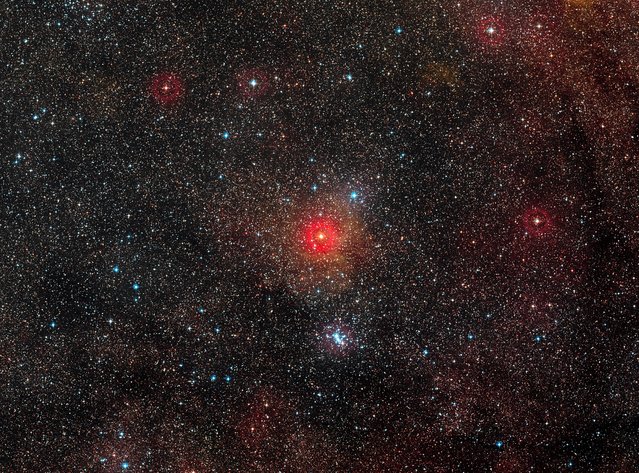 A undated handout image, made available 12 March 2014 by ESO, the European Southern Observatory, showing HR 5171, the brightest star just below the centre of this wide-field image. The yellow hypergiant is a very rare type of stars with only a dozen known in our galaxy. Its size is over 1300 times that of the Sun – one of the ten largest stars found so far. Observations with ESO’s Very Large Telescope Interferometer have shown that it is actually a double star, with the companion in contact with the main star. The star is some 50 per cent larger than the famous red supergiant Betelgeuse – 1300 times the diameter and about one million times brighter than the Sun. (Photo by EPA/ESO/Digitized Sky Survey 2 via European Pressphoto Agency) 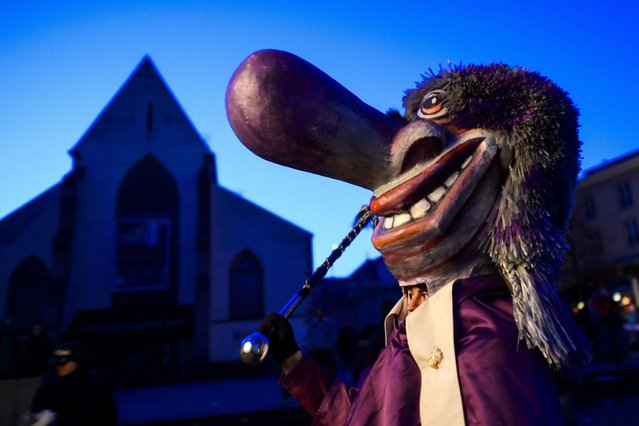 Revellers parade with lanterns during the traditional “Morgestreich” procession starting the carnival of Basel on March 10, 2014. The three-day event traditionally kicks off with an early morning procession, the Morgenstreich, which starts at 4 a.m. on Monday morning. Hundreds fife and drum players parade with illuminated canvas lanterns in the old town with public lights turned off. (Photo by Fabrice Coffrini/AFP Photo) 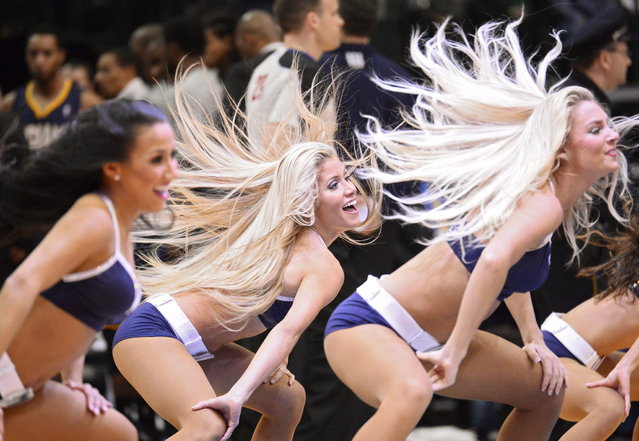 The dancers of the Dallas Mavericks during timeout against the Indiana Pacers in the first half of their basketball game NBA at American Airlines Center in Dallas, Texas, on March 10, 2014. (Photo by Larry W. Smith/EFE) 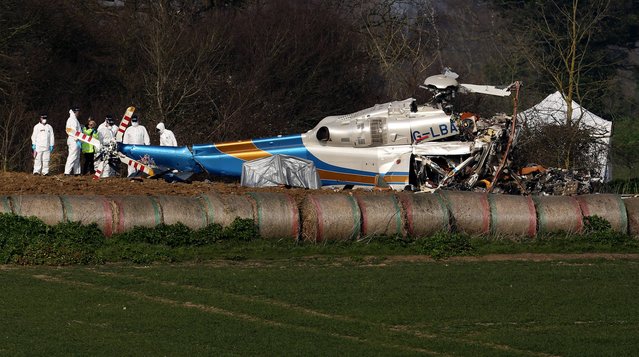 Forensic officers examine the wreckage of a helicopter alongside the A146 after four people died when the helicopter came down in thick fog in a field in Gillingham, near Beccles, Norfolk, at 7.30pm yesterday. Picture date: Friday March 14, 2014. One of the people killed in the crash is, according to reports, the Northern Ireland peer Lord Ballyedmond. (Photo by Chris Radburn/PA Wire) 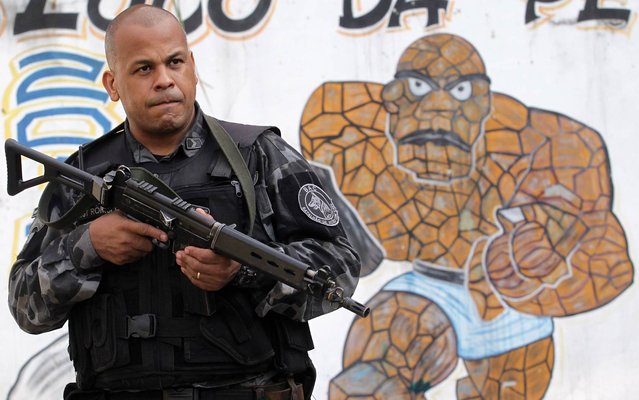 Police battalion patrol the area of ​​Vila Kennedy, in the West Zone of Rio, during the police action, on March 12, 2014. (Photo by Marcos de Paula/Estadão Conteúdo)