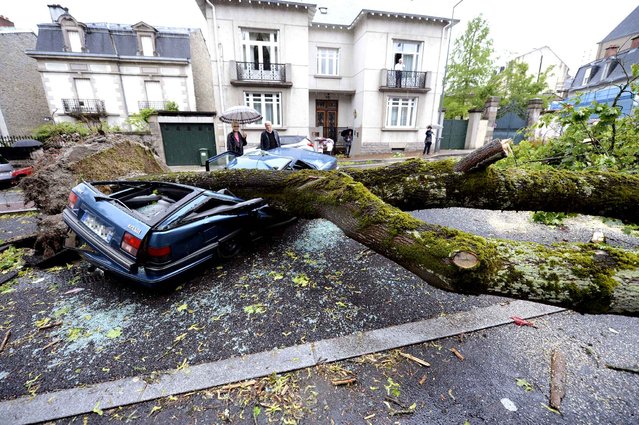 People walk by a car destroyed by a tree which fell during a storm and strong winds, in Limoges, on May 21, 2014. High winds upto 120 km/h and storms have caused at least one death and cut off some 42 000 homes from electricity today in the Midi-Pyrenees region of France. (Photo by Pascal Lachenaud/AFP Photo) 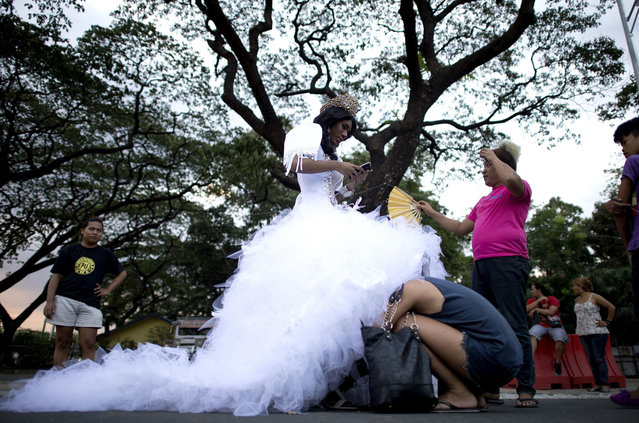 A participant in a white dress receives assistance as Association of Transgender People in the Philippines (ATP) and TransMan Philippines (TMP) members prepare to participate in a “Santacruzan” procession in Manila on May 18, 2014. The parade is held in celebration of the International Day Against Homophobia and Transphobia. (Photo by Noel Celis/AFP Photo) 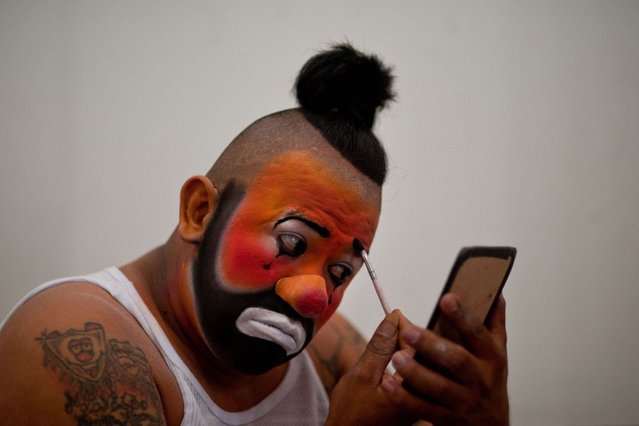 Guatemalan clown Meneito works in his make up, before a workshop during the VI Laugh Festival in San Salvador, El Salvador on May 19, 2014. The Laugh Festival is celebrated by the Latin American clown brotherhood and gathers clowns from Central America to learn and improve their entertainment skills. (Photo by Jose Cabezas/AFP Photo) 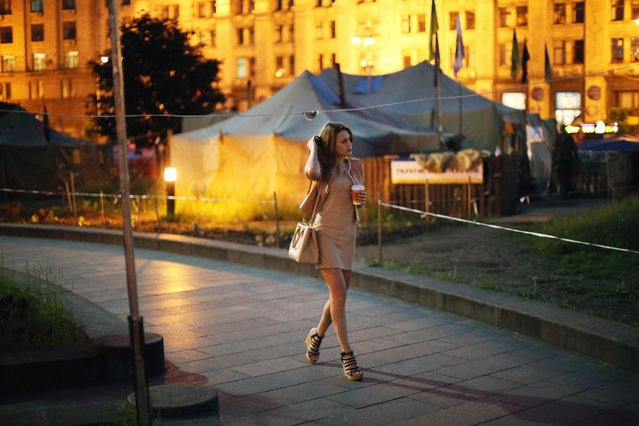 A woman walks through Independence Square on May 22, 2014 in Kiev, Ukraine. Protesters continue to occupy Independence Square ahead of the Ukrainian Presidential election which will be held on Sunday 25, May, 2014. (Photo by Dan Kitwood/Getty Images) 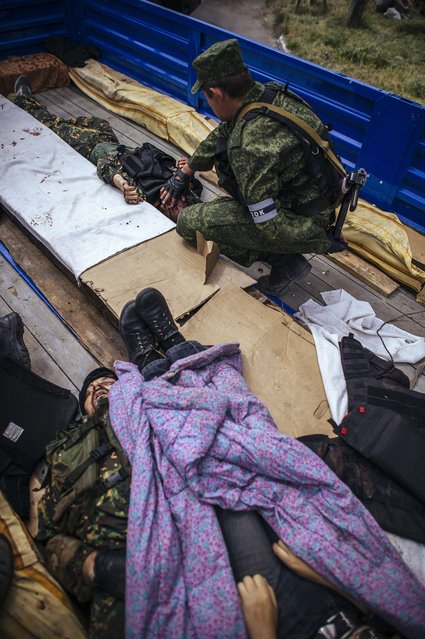 A pro-Russian gunman touches the body of his friend in a truck at a checkpoint outside of the eastern Ukrainian city of Donetsk on May 23, 2014. At least five people were killed in fighting early Friday between pro-Russian militiamen and Ukrainian forces near the eastern city of Donetsk, an AFP photographer said. Fighting in the east has witnessed a bloody resurgence ahead of Sunday's presidential election that the pro-Russian insurgents have vowed to disrupt. (Photo by Dimitar Dilkoff/AFP Photo) 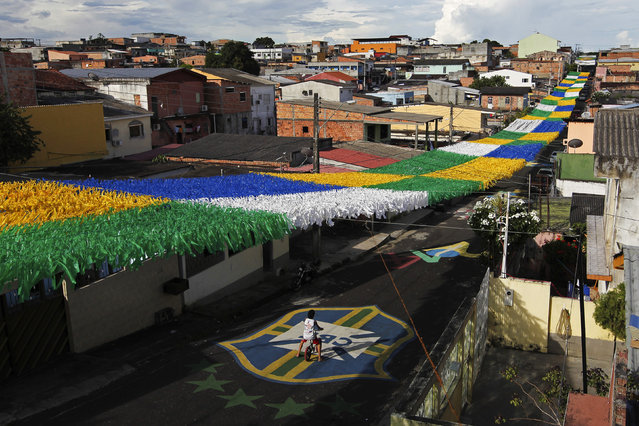 A boy rides his bicycle along Third Street of the Alvorada neighbourhood which is decorated for the 2014 World Cup in Manaus, one of the tournament's host cities, May 17, 2014. The World Cup will be held in 12 cities across Brazil from June 12 through July 13. (Photo by Bruno Kelly/Reuters) 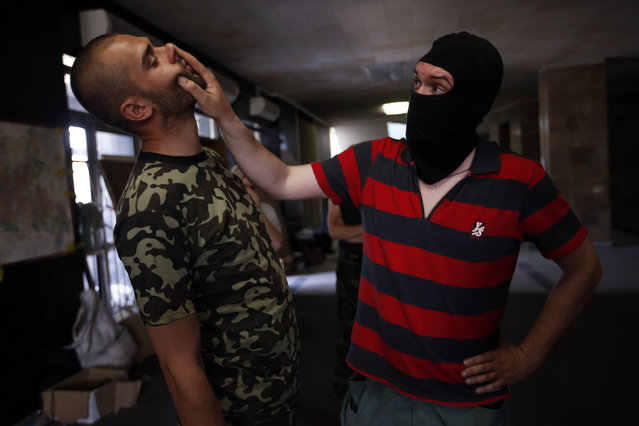 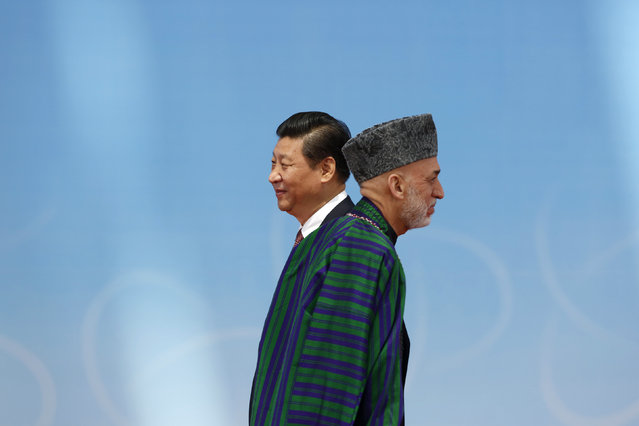 Afghan President Hamid Karzai (R) walks away after shaking hands with his Chinese counterpart Xi Jinping before the opening ceremony in the Expo Center during the fourth Conference on Interaction and Confidence Building Measures in Asia (CICA) summit in Shanghai May 21, 2014. (Photo by Aly Song/Reuters) 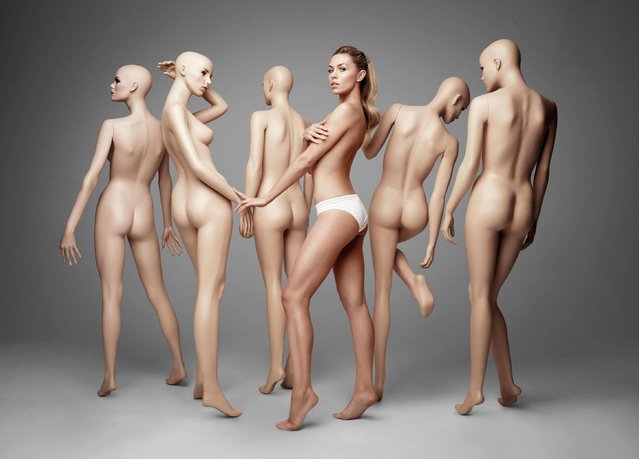 Photo issued by Virgo Health of the 28-year-old Abbey Clancy who has been revealed as the new ambassador for Veet and Scholl on May 19, 2014, and she certainly seems the right candidate to be promoting smooth skin. The mother-of-one looks absolutely flawless as she wears next to nothing whilst posing up with a group of shop window mannequins. Wearing just a pair of white skimpy knickers, Abbey and the brands are encouraging the public to bare their skin with confidence as the weather warms up and summer approaches. (Photo by Virgo Health/PA Wire) 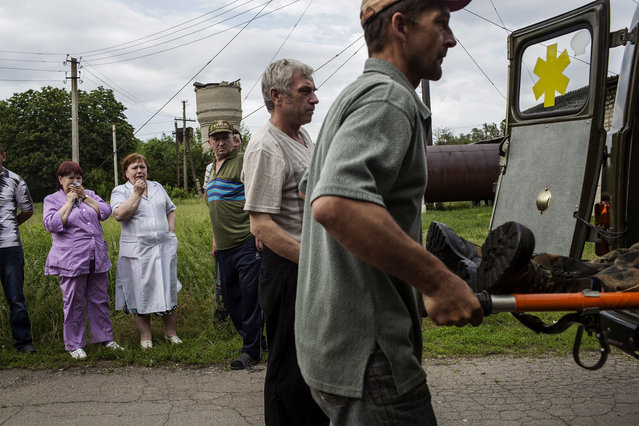 Men carry the body of a killed Ukrainian army soldier out of a van and into the morgue in Volnovakha, on May 22, 2014, after an ambush at a check point between Blohoddatne and Horlivka, 50km south of Donetsk. Pro-Russian rebels firing mortar shells and grenades killed 14 Ukrainian soldiers today, the blackest day yet for the military and a dramatic ratcheting up of tensions just three days before a crunch election. The attacks in the eastern industrial belt near the Russian border underscored the difficulties of the embattled Kiev government in resolving a crisis that is threatening to tear the country apart. (Photo by Fabio Bucciarelli/AFP Photo) 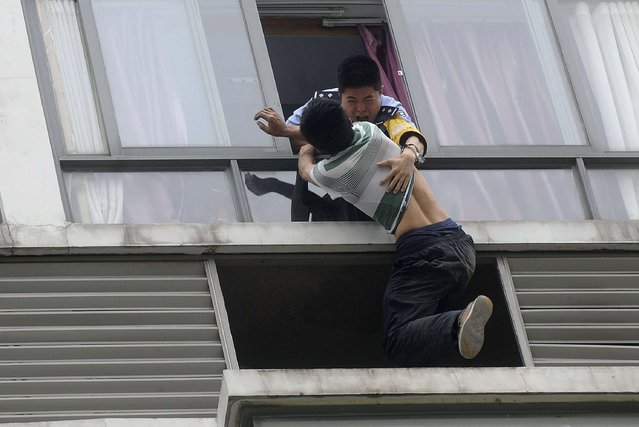 A police officer (top) grabs a man who tries to jump off the seventh floor of a hotel, in Chengdu, Sichuan province May 19, 2014. The32-year-old man attempted to commit suicide on Monday after a failed relationship. Police and his ex-girlfriend managed to talk him down 3 hours later, local media reported. (Photo by Reuters/Stringer) 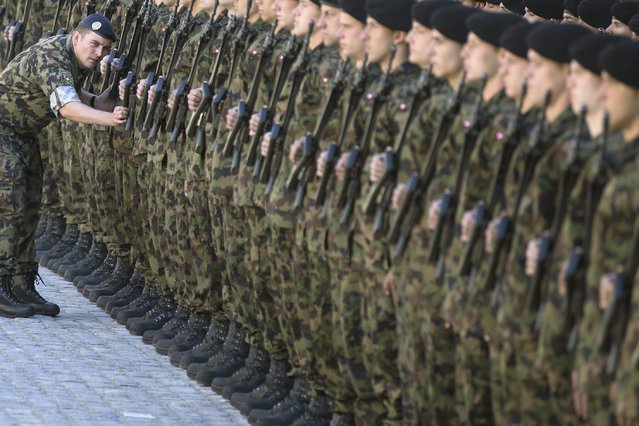 Members of the guard of honour prepare for the arrival of Swiss Federal President Didier Burkhalter and Italian President Giorgio Napolitano on the Muenster square during Napolitano's state visit to Switzerland, in Bern, on 20 May 2014. (Photo by Peter Klaunzer/EPA) 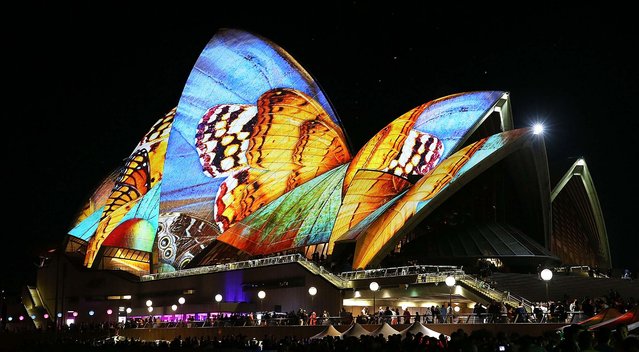 The Sydney Opera House lights up as part of VIVID Live in Sydney, Australia, on May 23, 2014. VIVID Sydney is an annual event celebrating the themes of music, light and ideas throughout the city. (Photo by Mark Metcalfe/Getty Images) 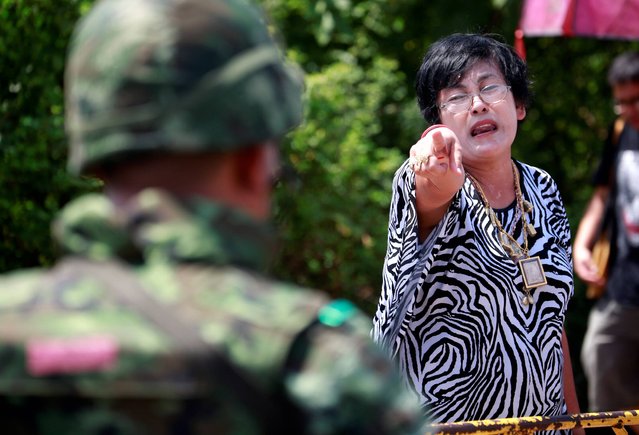 A pro-government protester points at a soldier during a cleanup at a pro-government demonstration site on the outskirts of Bangkok, Thailand Friday, May 23, 2014. Thailand's ruling military on Friday summoned the entire ousted government and members of the politically influential family at the heart of the country's long-running conflict, a day after it seized control of this volatile Southeast Asian nation in a non-violent coup. (Photo by Wason Wanichakorn/AP Photo) 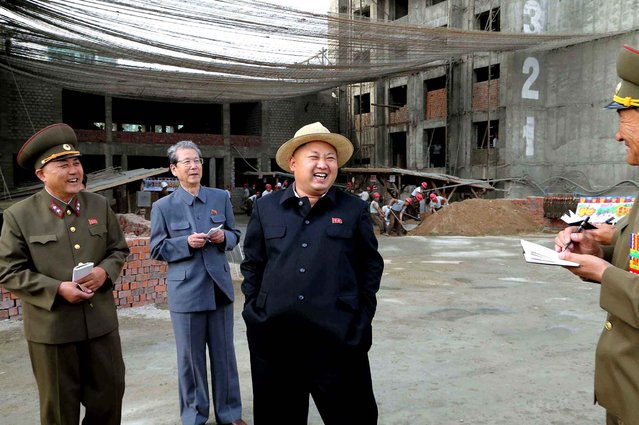 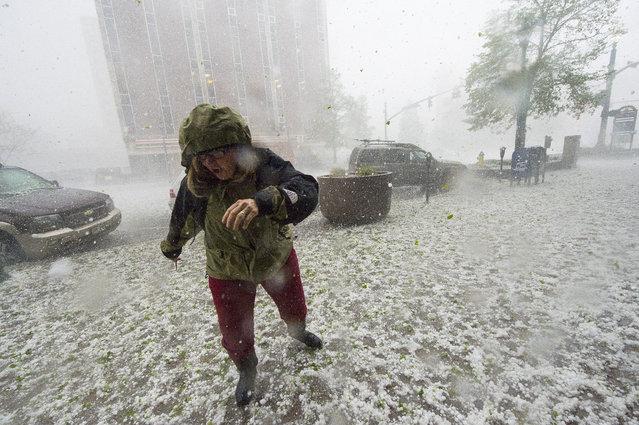 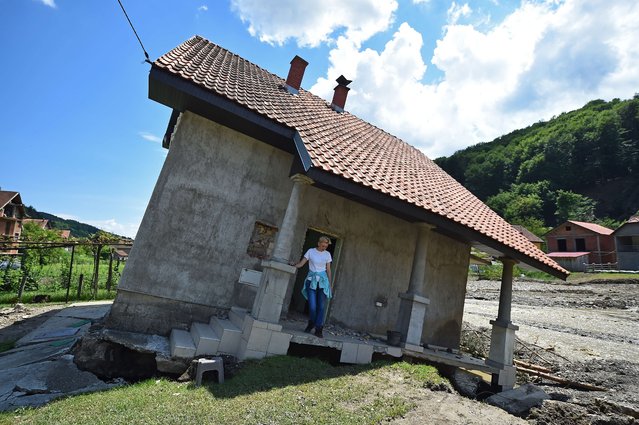 Flood victim Pavlovic Oksana stands on the front porch of her house, damaged by flooding and landslide, in Krupanj, some 130 kilometres south west of Belgrade, on May 20, 2014, after the western Serbian town was hit with floods and landslides, cutting it off for four days. Serbia declared three days of national mourning on May 20 as the death toll from the worst flood to hit the Balkans in living memory rose and health officials warned of a possible epidemic. At least 49 people have been killed already by the worst floods in central Europe for a century and more than 1.6 million people have been hit as the river Sava and its tributaries have burst their banks, inundating tens of thousands of hectares of farmland and destroying houses and buildings. (Photo by Andrej Isakovic/AFP Photo) 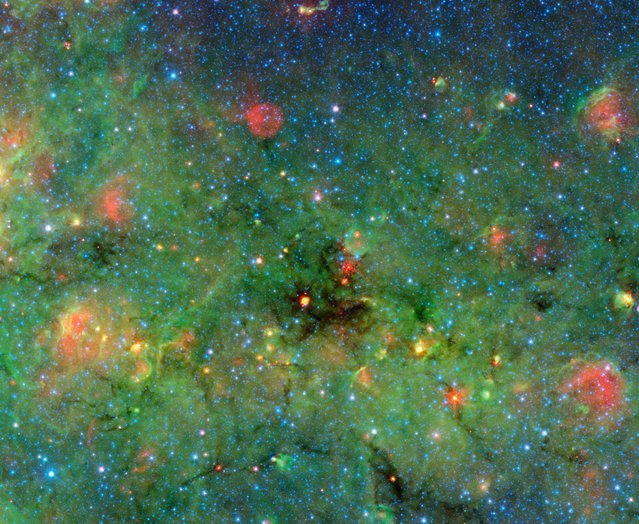 This NASA image obtained May 22, 2014 shows clumps that were discovered within a huge cosmic cloud of gas and dust. Infrared observations from NASA's Spitzer Space Telescope of these blackest-of-black regions in the cloud paradoxically light the way to understanding how the brightest stars form.The large cloud looms in the center of this image of the galactic plane from Spitzer. The zoom shows details of the cloud, revealing the dense clumps. A new study takes advantage of the shadows cast by these dark clumps to measure the cloud's overall structure and mass. These dense, clumpy pockets of star-forming material within the cloud are so thick with dust that they scatter and block not only visible light, but almost all background infrared light as well. The dusty cloud, the results suggest, will likely evolve into one of the most massive young clusters of stars in our galaxy. The densest clumps will blossom into the cluster's biggest, most powerful stars, called O-type stars, the formation of which has long puzzled scientists. Blue represents 3.6-micron light and green shows light of 8 microns, both captured by Spitzer's infrared array camera. Red is 24-micron light detected by Spitzer's multiband imaging photometer. The red spot in the center of the zoom oval, unrelated to the new study's findings, is a young star whose radiating heat has lit up a surrounding cocoon of dust. (Photo by AFP Photo/NASA/University of Zurich) 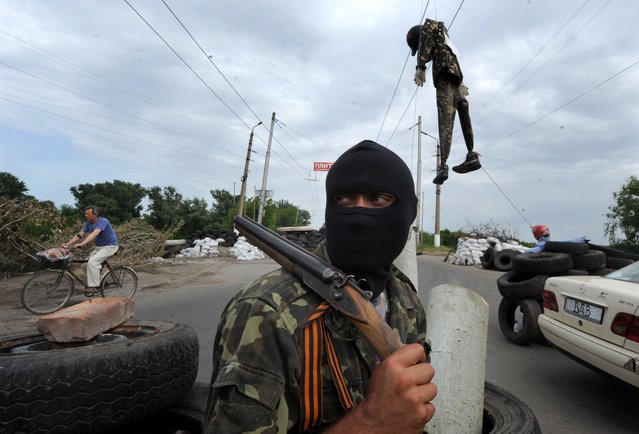 A masked pro-Russian gunman wearing a ribbon of Saint George guards at a check-point near the eastern Ukrainian city of Slavyansk on May 23, 2014. At least five people were killed Friday in fighting near Ukraine's eastern hub of Donetsk two days before a presidential election undermined by an upsurge in attacks by pro-Russian separatists. (Photo by Viktor Drachev/AFP Photo) 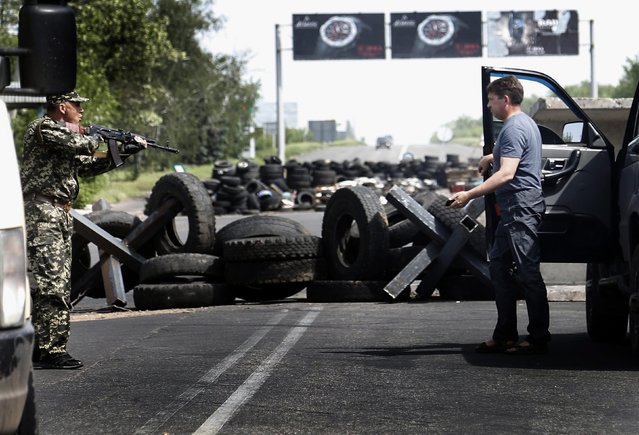 Armed pro-Russian militants detain an unknown man suspected of assisting the Ukrainian army at a checkpoint outside Slaviansk, 19 May 2014. Russian President Vladimir Putin ordered all troops stationed along the border with Ukraine to withdraw, the Kremlin said 19 May 2014. (Photo by Maxim Shipenkov/EPA) 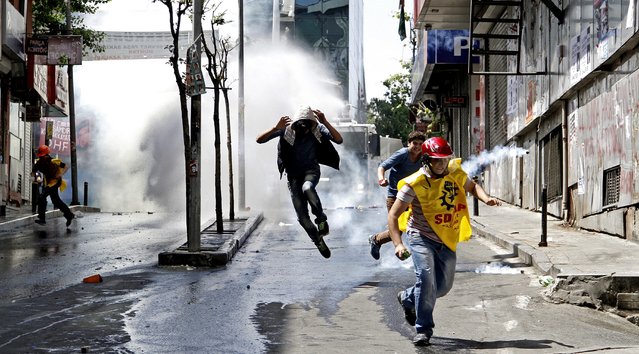 Protestors run away from tear gas used by Turkish riot police during a demonstration against the government in Istanbul, Turkey, 22 May 2014. A group of protestors see the Turkish government responsible for the Soma mine explosion. Prime Minister Recep Tayyip Erdogan's AKP reportedly rejected a motion by the centre-left People's Republican Party (CHP) in April to review safety at the Soma mine. The worst mining disaster in the country's history left at least 301 workers dead. (Photo by Ulas Yunus Tosun/EPA) 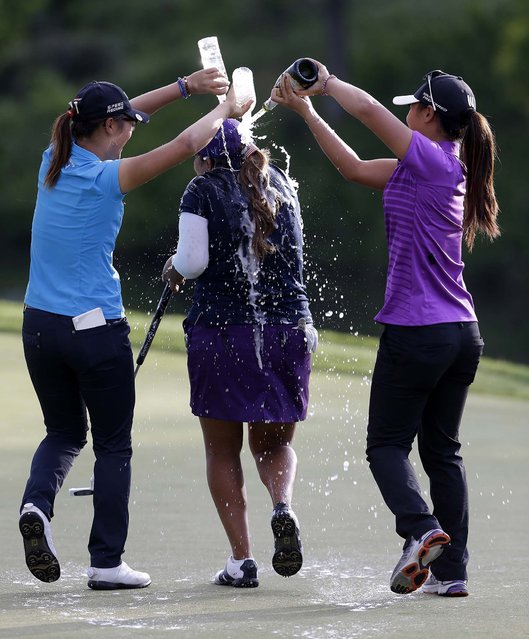 Lydia Ko, left, and Danielle Kang douse Lizette Salas, with sparkling wine and water as she celebrates winning the Kingsmill Championship golf tournament at the Kingsmill resort in Williamsburg, Virginia, on May 18, 2014. Salas won her first LPGA event after shooting an even par-71 leaving her at 13-under for the tournament. (Photo by Steve Helber/Associated Press) 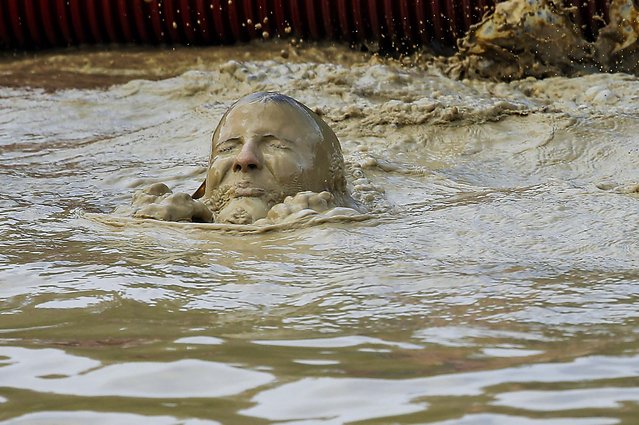 A participant dives into the muddy water as she makes her way through an obstacle course run in Weeze, Germany, on May 17, 2014. The goal is for participants on the military designed track is to reach the finish line as a team. (Photo by Frank Augstein/Associated Press) 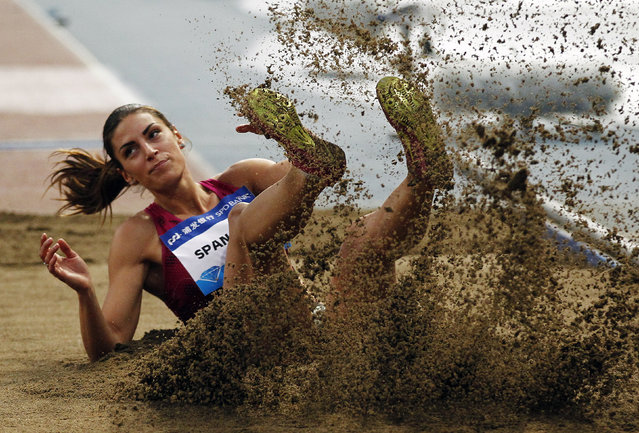 Ivana Spanovic of Serbia competes at the women's long jump at the IAAF Diamond League athletics meet in Shanghai May 18, 2014. (Photo by Carlos Barria/Reuters) 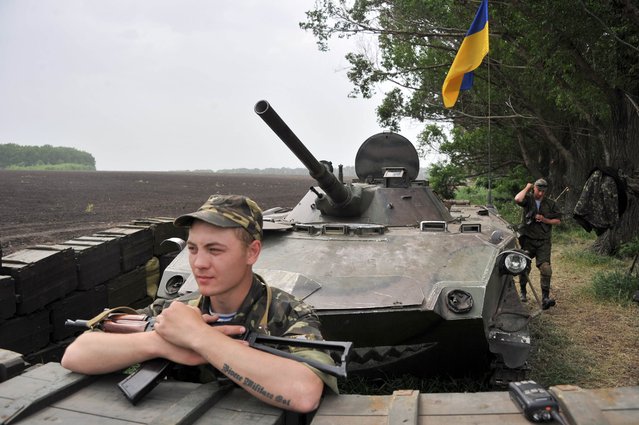 Ukrainian troops guard the road from Izyum to Slavyansk on May 19, 2014. NATO head Anders Fogh Rasmussen said Monday he had seen no proof of Russian troops withdrawing from the border with Ukraine after President Vladimir Putin announced an end to exercises and return to bases. (Photo by Genya Savilov/AFP Photo) 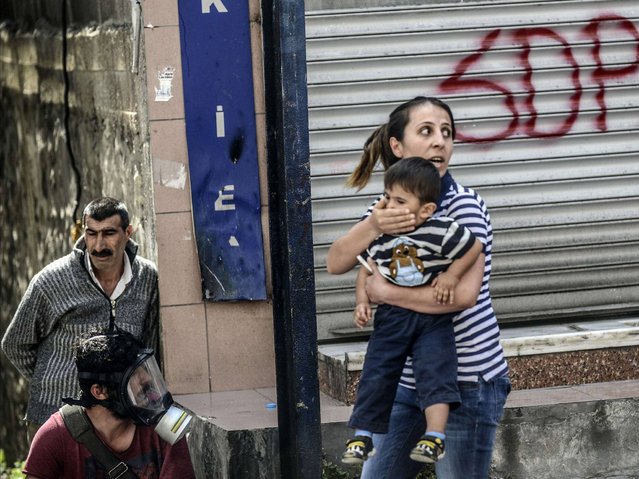 A woman holds her child as she tries to make her way through a street during clashes between Turkish riot police and protesters taking part in a demonstration against the recent mine accident in Soma, on May 22, 2014, in the Okmeydani district of Istanbul. One man was injured when Turkish riot police today fired tear gas and water cannon to disperse a group of Istanbul protesters hurling Molotov cocktails and stones. Tensions are high in Turkey with the approach of the first anniversary of deadly nationwide anti-government protests and in the wake of an unprecedented mine disaster that claimed 301 lives last week. (Photo by Bulent Kilic/AFP Photo)
Edit Del
24 May 2014 12:42:00, post received 0 comments
Publication archive:
←   →
Popular tags:
All tags
Last searches: