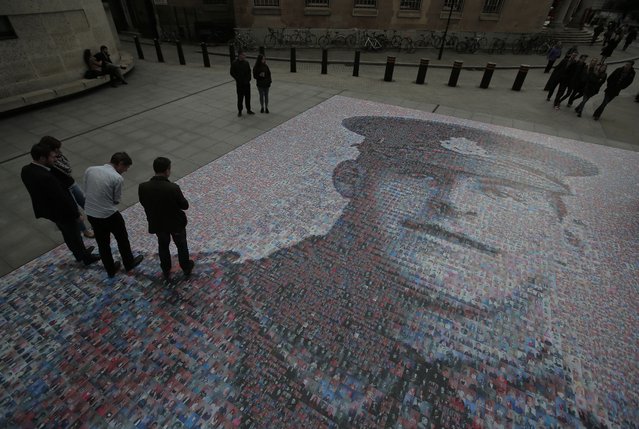 People walk on and around a digital mosaic of photographs of people, depicting British Army private James Ernest Beaney, killed during World War One, outside the BBC headquarters in central London, Friday, November 7, 2014. Created by artist Helen Marshall, the portrait created by using more than 30,000 images, depicts Beaney, who was serving in France, when he was killed on August 8, 1916. (Photo by AP Photo) 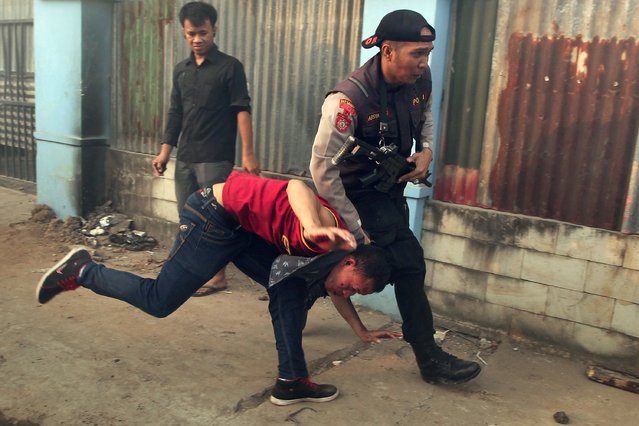 An armed police officer arrests a demonstrator following clashes between police and demonstrators protesting against government plans to increase fuel prices in Makassar, South Sulawesi province, on November 7, 2014. The new Indonesian President Joko Widodo, known as Jokowi, is expected to announce a large increase in the price of petrol and diesel in the coming weeks to cut government subsidies that are a drain on Southeast Asia's biggest economy. (Photo by Yusuf Wahil/AFP Photo) 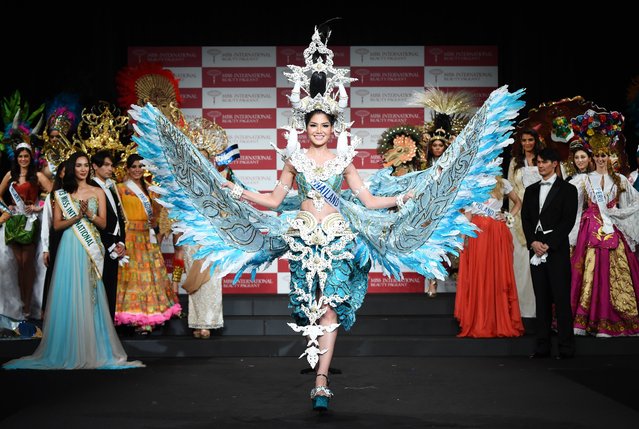 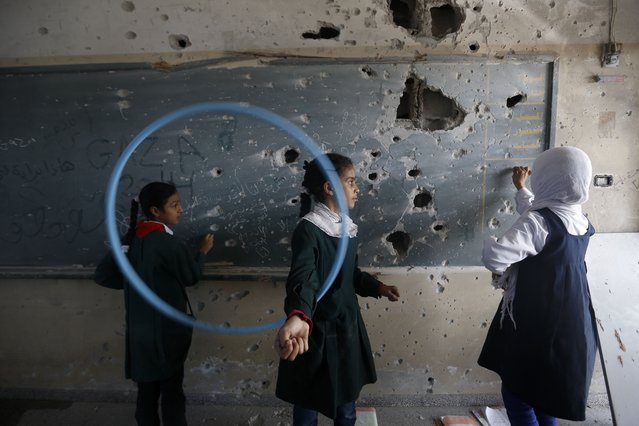 Palestinian girls play inside their school which was destroyed during the 50 days of conflict between Israel and Hamas last summer, in the Shejaiya neighborhood of Gaza City, on November 5, 2014. A leading human rights group has accused Israel of committing war crimes during this summer's war in Gaza. Amnesty International says Israel displayed “callous indifference” in attacks on family homes in the densely populated coastal strip that in some cases amounted to war crime. (Photo by Mohammed Abed/AFP Photo) 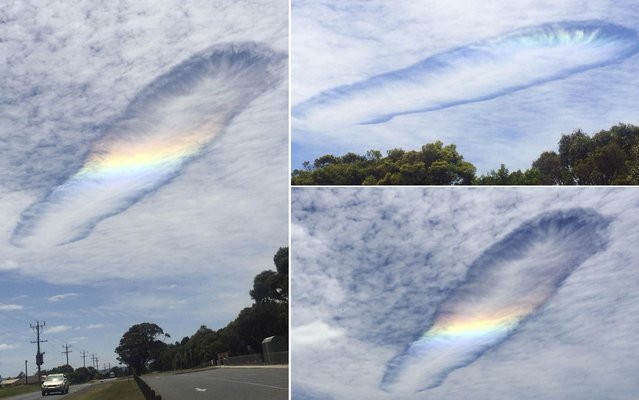 In this Monday, November 3, 2014 photos taken with smartphone camera, a fallstreak hole forms in the sky over Wonthaggi, Australia. A fallstreak hole is a circular gap that appears in high clouds, when a section of the cloud freezes. The ice crystals are heavy, so they fall out of the cloud, leaving a hole. It is a relatively rare phenomenon. (Photo by Leesa Willmott/AP Photo) 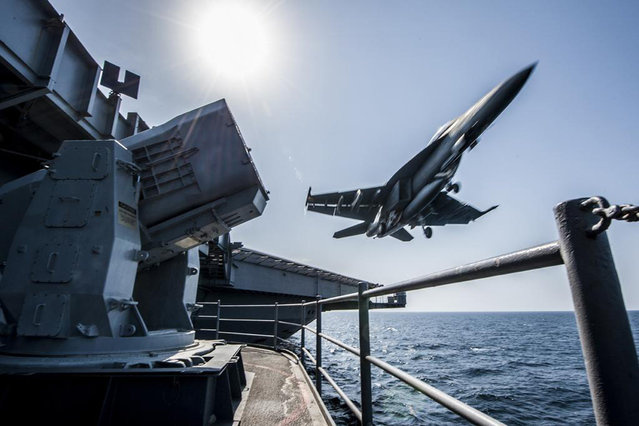 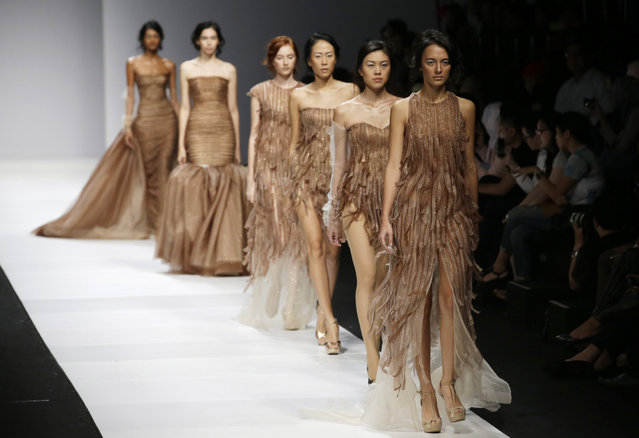 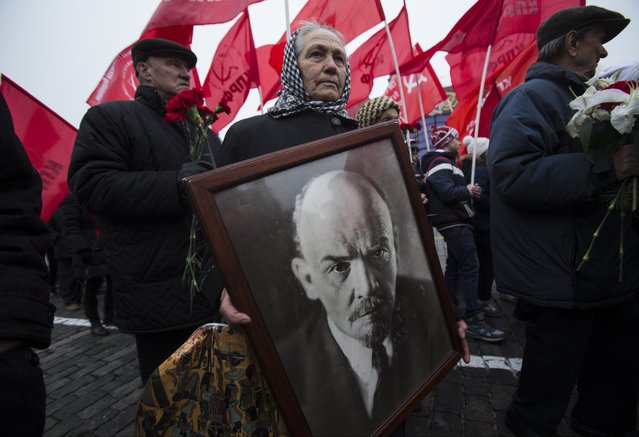 A woman carries a portrait of Lenin as she walks with the Communist Party members and supporters to place flowers at the Tomb of Soviet founder Vladimir Lenin, at Moscow's Red Square on Thursday, November 6, 2014 to mark the anniversary of the November 7, 1917 Bolshevik revolution, which is no longer a public holiday in Russia. (Photo by Pavel Golovkin/AP Photo) 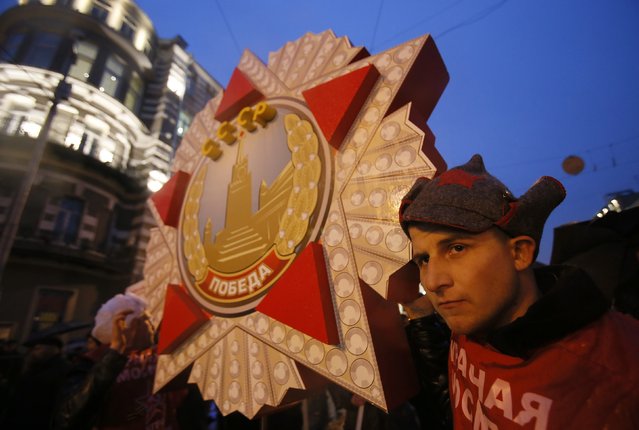 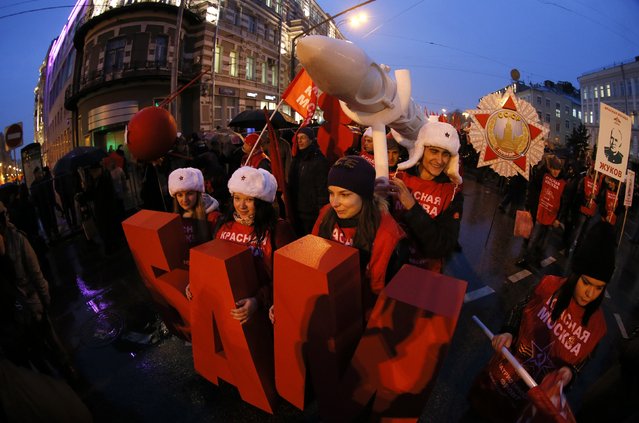 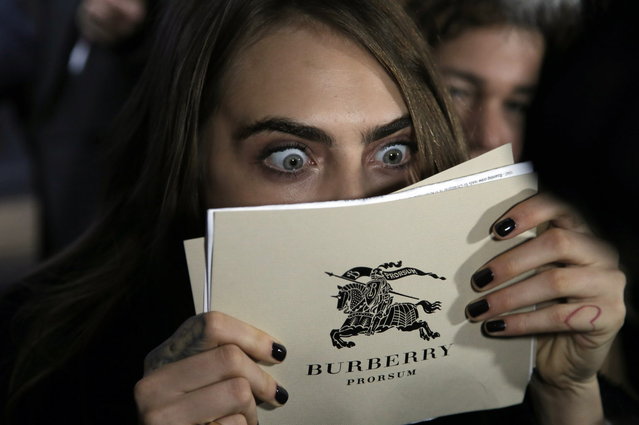 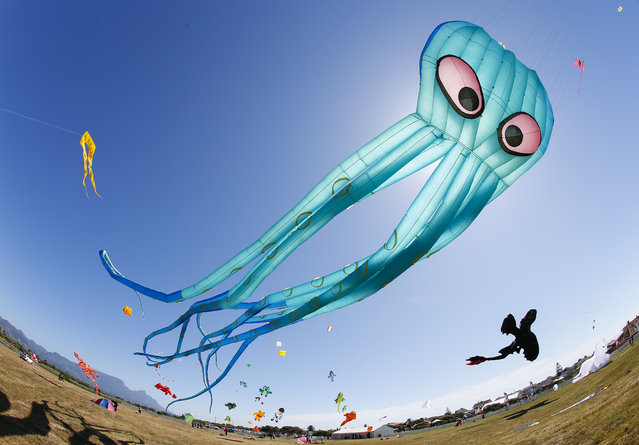 A photograph taken with a wide angle lens showing kites flying during the Cape Town International Kite Festival in Muizenberg, South Africa, November 1, 2014. International kite flyers from Singapore, Germany and New Zealand showcased some never seen before kites including Toothless from the childrens film “How To Train Your Dragon 2” during Africa's biggest kite festival viewed by around 20,000 visitors. (Photo by Nic Bothma/EPA) 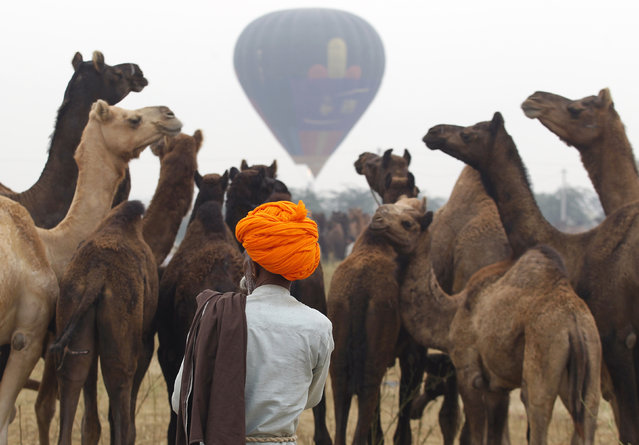 A camel herder wearing a turban arrives with his camels at the Pushkar Fair in the desert Indian state of Rajasthan November 1, 2014. (Photo by Jitendra Prakash/Reuters) 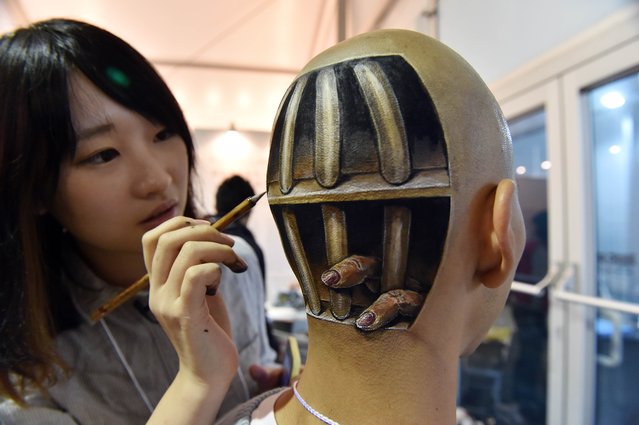 This picture taken on November 1, 2014 shows Japanese body-painting artist Hikaru Cho (L) adding the finishing touches to a body painting of fingers sticking out from prison cell bars on the head of Ryonosuke Tanaka during “Tokyo Designers Week” in Tokyo. Cho, 21, was born to Chinese parents in Japan and burst onto Tokyo's art scene when she entered the city's Musashino Art University in 2012. Cho's ultimate ambition is to paint an entire – and naked – body. (Photo by Yoshikazu Tsuno/AFP Photo) 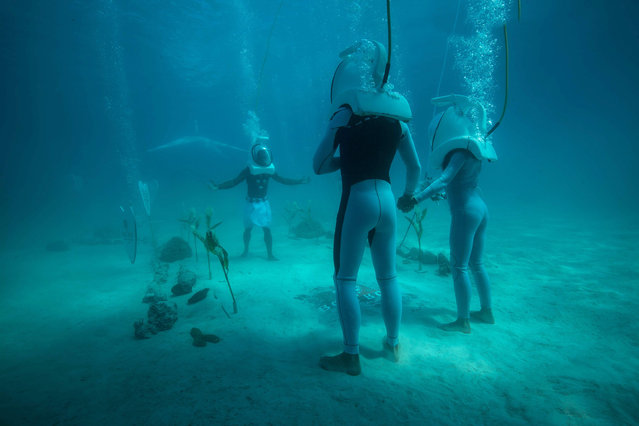 In a picture taken with an underwater camera, a couple stands in front of a Polynesian priest during their underwater wedding ceremony on October 25, 2014 in Bora-Bora, in French Polynesia. The ceremony lasts twenty minutes and costs around 2700 euros. (Photo by Ben Thouard/AFP Photo) 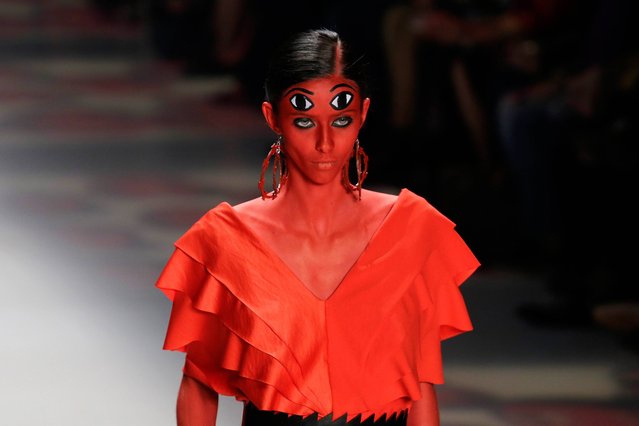 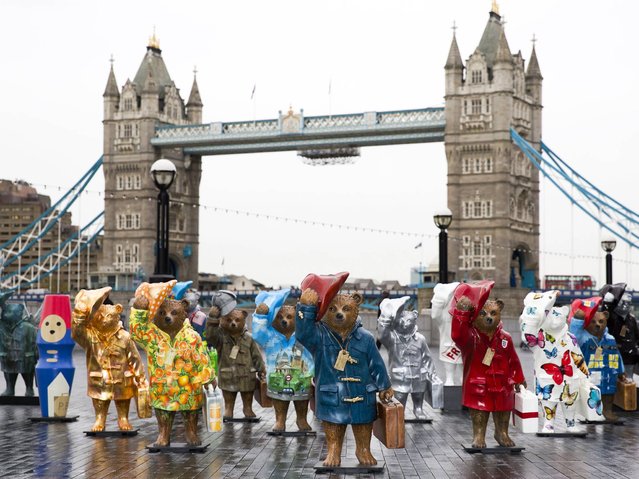 General view of Paddington Bear statues during the launch of The Paddington Trail at The Scoop, More London on November 3, 2014 in London, England. (Photo by Ian Gavan/Getty Images) 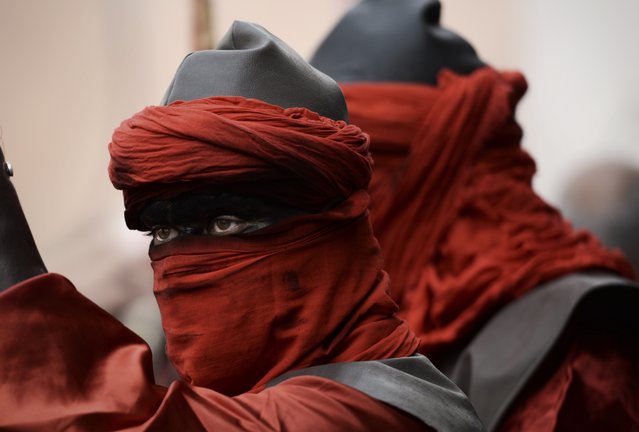 Bahraini Shiite Muslims take part in a ceremony marking Ashura, which commemorates the seventh century slaying of Imam Hussein, the grandson of Prophet Mohammed, in the village of Sanabis, west of Manama on November 4, 2014. Ashura mourns the death of Imam Hussein, a grandson of the Prophet Mohammed, who was killed by armies of the Yazid near Karbala in 680 AD. (Photo by Mohammed Al-Shaikh/AFP Photo) 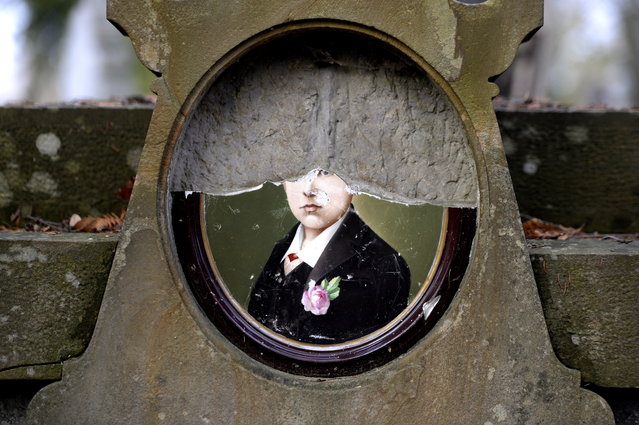 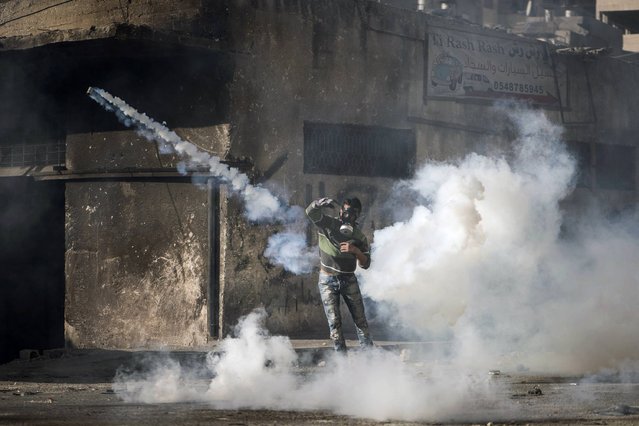 Palestinian youth clash with police at Shuafat refugee camp a day after a Palestinian resident of the camp was named as the driver of a van that rammed into a crowd at a rail stop on November 6, 2014 in Jerusalem, Israel. Clashes started at the refugee camp following the attack in which one person was killed and at least 13 people were wounded after a driver crashed into pedestrians during a suspected terror attack near East Jerusalem. (Photo by Ilia Yefimovich/Getty Images) 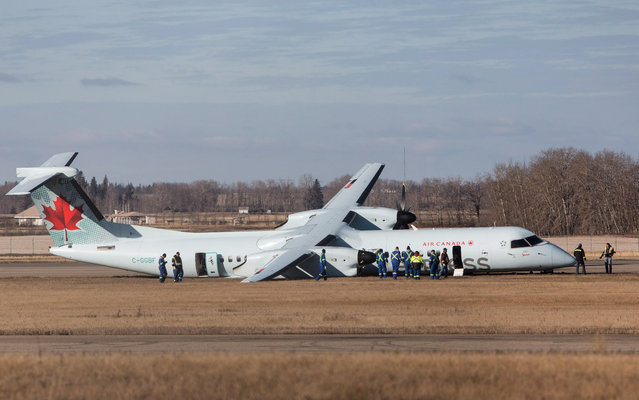 Investigators look over the scene of an Air Canada passenger plane after it had rough landing in Edmonton, Alberta on Friday, November 7, 2014. Flight 8481 was on its way to Grande Prairie, Alberta, from Calgary and was carrying 71 passengers and a crew of four. There were reports that one of the plane's tires blew out on takeoff, but a crosswind prevented the aircraft from returning to Calgary so it carried on to Edmonton. (Photo by Jason Franson/AP Photo/The Canadian Press) 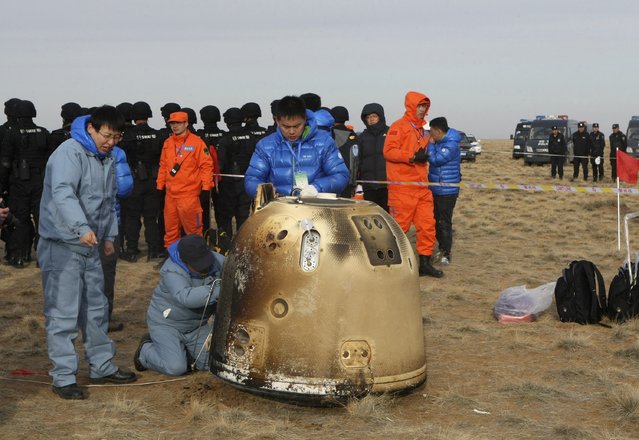 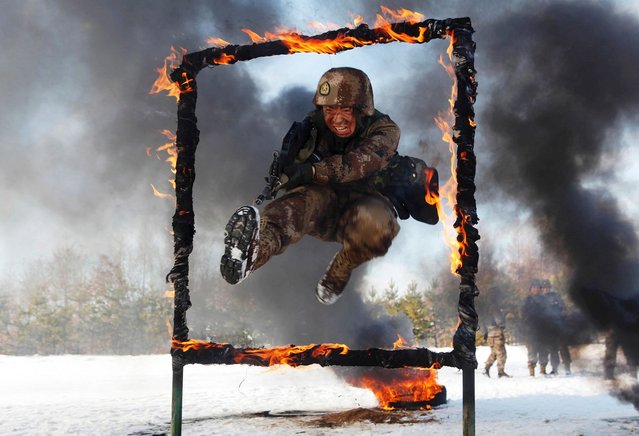 A People's Liberation Army soldier jumps over a burning obstacle during a training session on a snowfield, in Heihe, on November 2, 2014. (Photo by Reuters/Stringer) 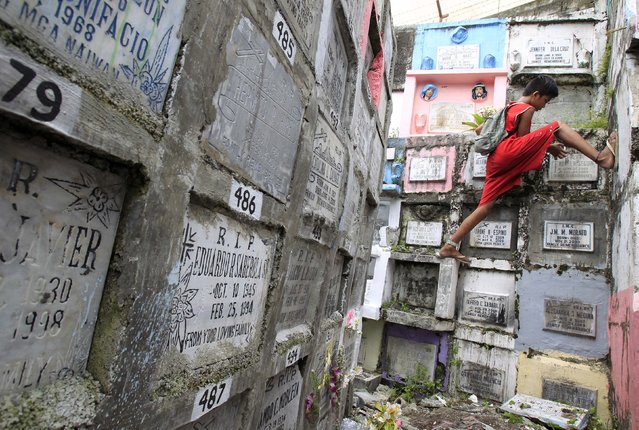 A boy cleans the gravestone of a loved one at a public cemetery in Marikina city, east of Manila November 1, 2014. (Photo by Romeo Ranoco/Reuters) 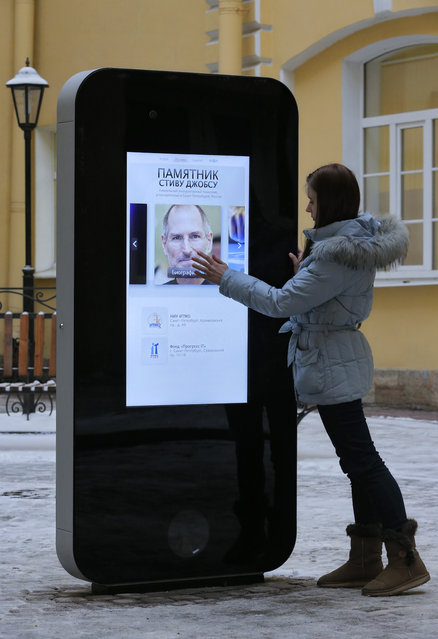 In this file photo dated Thursday, January 10, 2013, a girl touches the screen showing a portrait of Steve Jobs on the recently erected memorial to late Apple Corp. co-founder in the courtyard of the Techno Park of the St. Petersburg National Research University of Information Technologies, Mechanics and Optics (ITMO University) in St. Petersburg, Russia. The six-foot tall interactive memorial has been taken down in response to last week's announcement that CEO of Apple, Tim Cook is openly gay. (Photo by Dmitry Lovetsky/AP Photo) 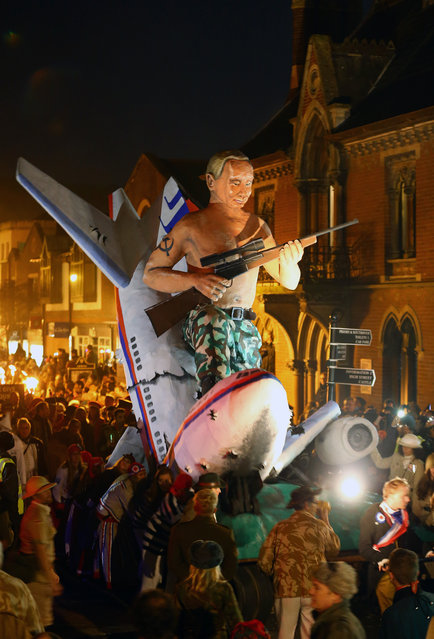 An effigy portraying Russian President Vladimir Putin is paraded through the town of Lewes, England, where an annual bonfire night procession is held by the Lewes Bonfire Societies, Wednesday November 5, 2014. (Photo by Gareth Fuller/AP Photo/PA Wire) 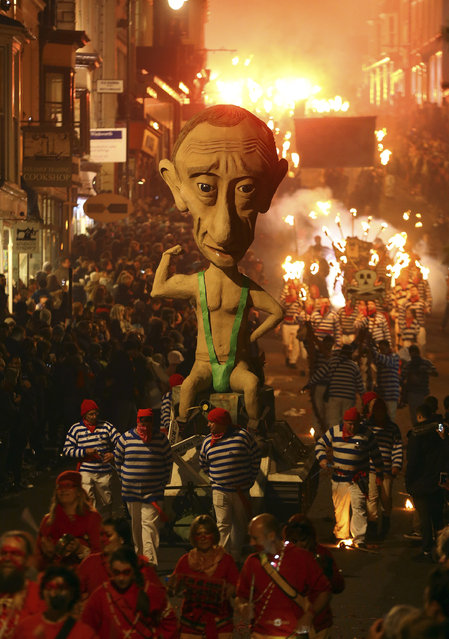 An effigy of Russian President Vladimir Putin is paraded through the town of Lewes, England, where an annual bonfire night procession is held by the Lewes Bonfire Societies, Wednesday November 5, 2014. (Photo by Gareth Fuller/AP Photo/PA Wire) 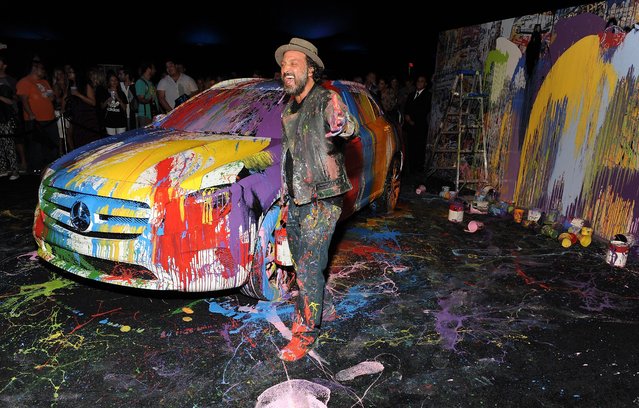 Artist Mr. Brainwash aka MBW attends the Mercedes-Benz Evolution Tour with Alabama Shakes & Young the Giant at The Barker Hangar on November 6, 2014 in Santa Monica, California. (Photo by Angela Weiss/Getty Images for Mercedes-Benz) 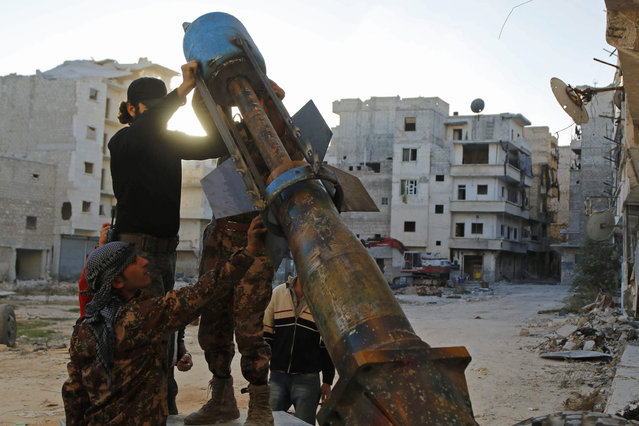 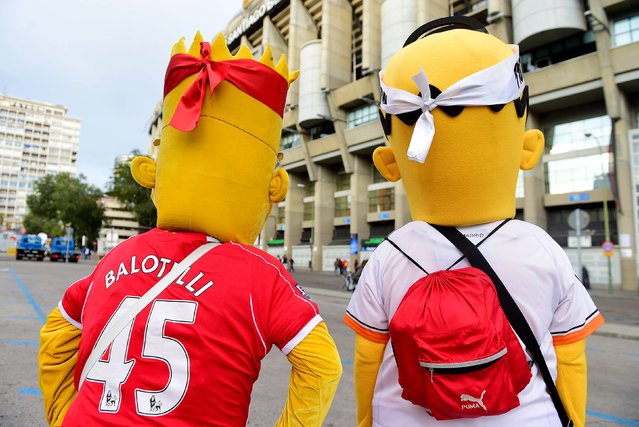